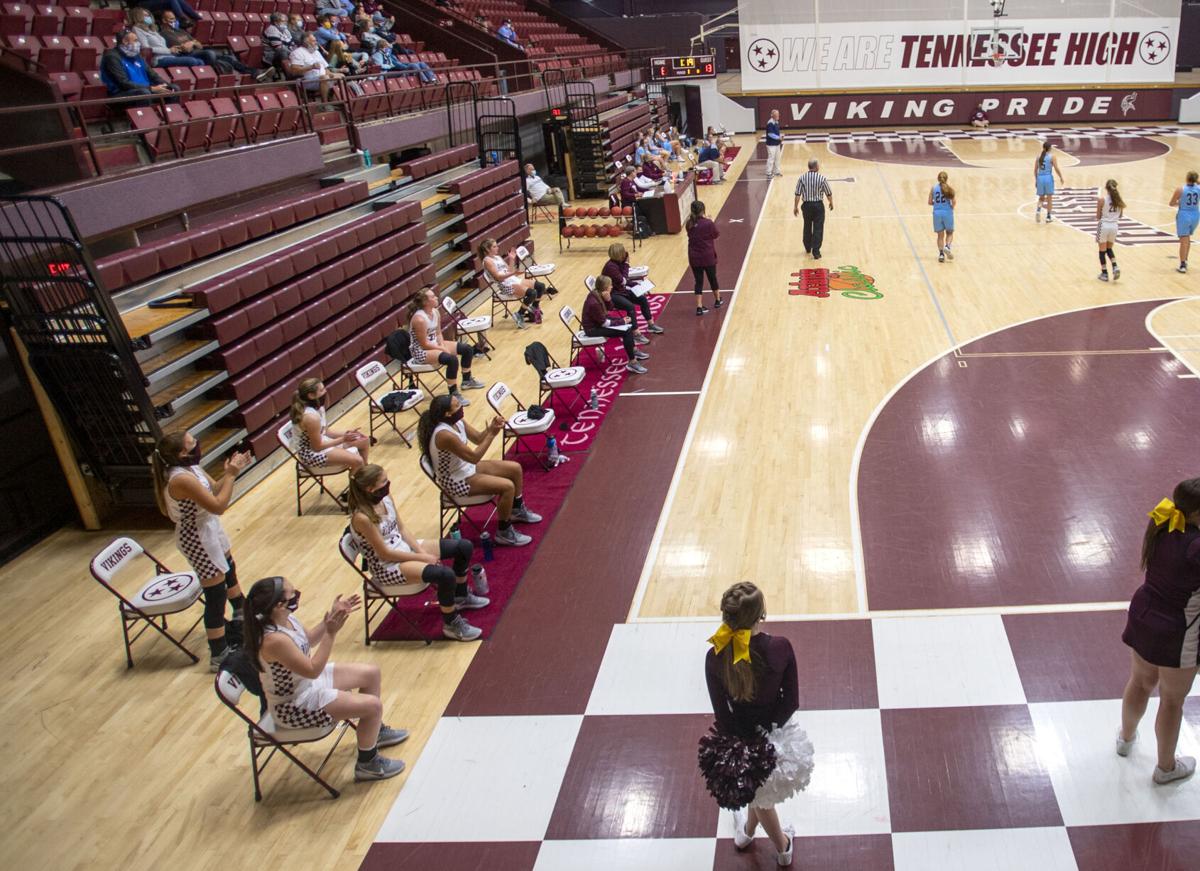 The Tennessee High girls basketball team practices social distancing during the Vikings’ season-opening loss to Sullivan South on Thursday night at Viking Hall, which is currently limiting spectators and taking precautions to combat the spread of the coronavirus. 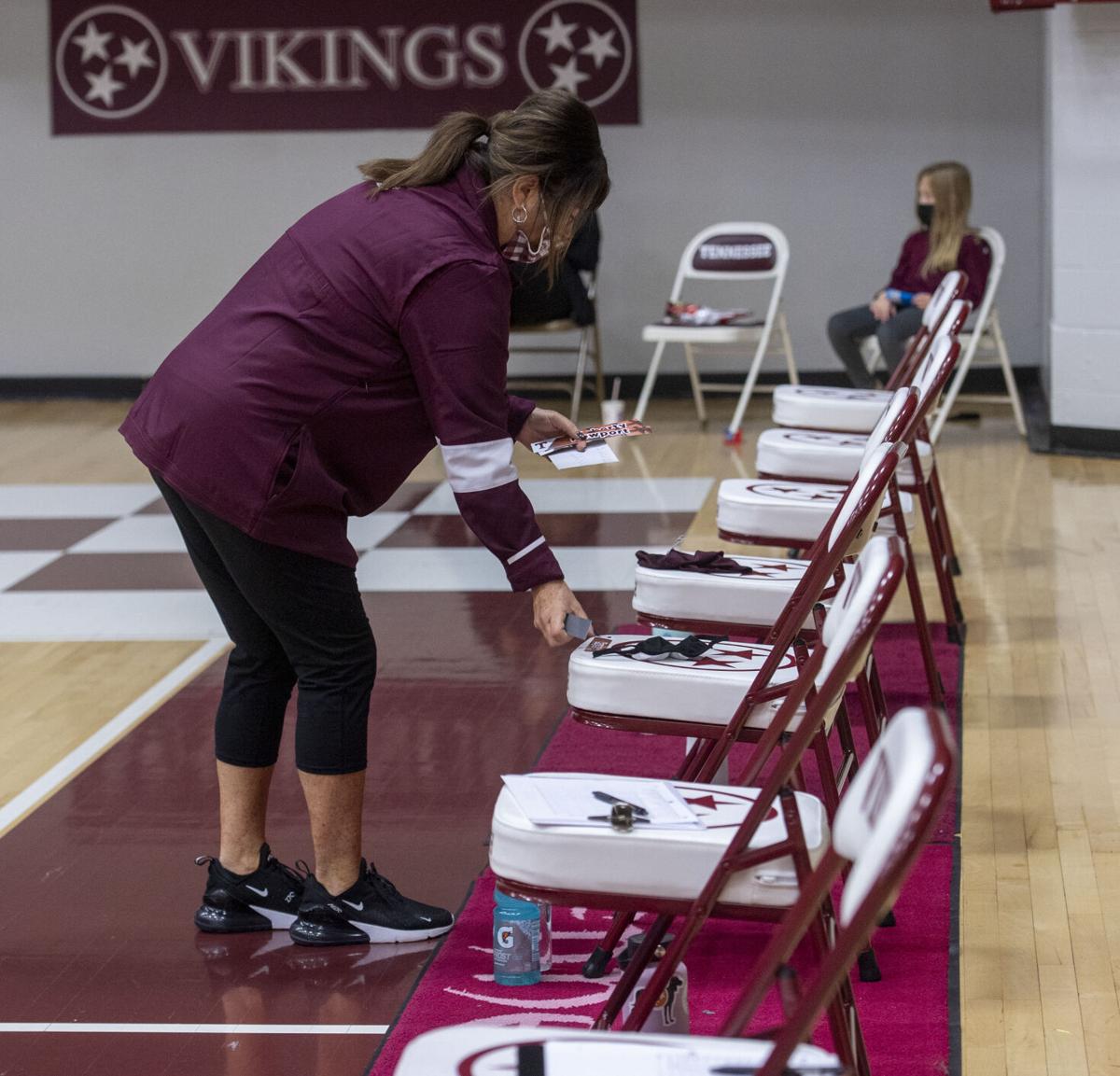 THS Lady Vikings head coach Kim Bright places name tags on the socially distance seats on the home bench prior to the start of their game with Sullivan South. 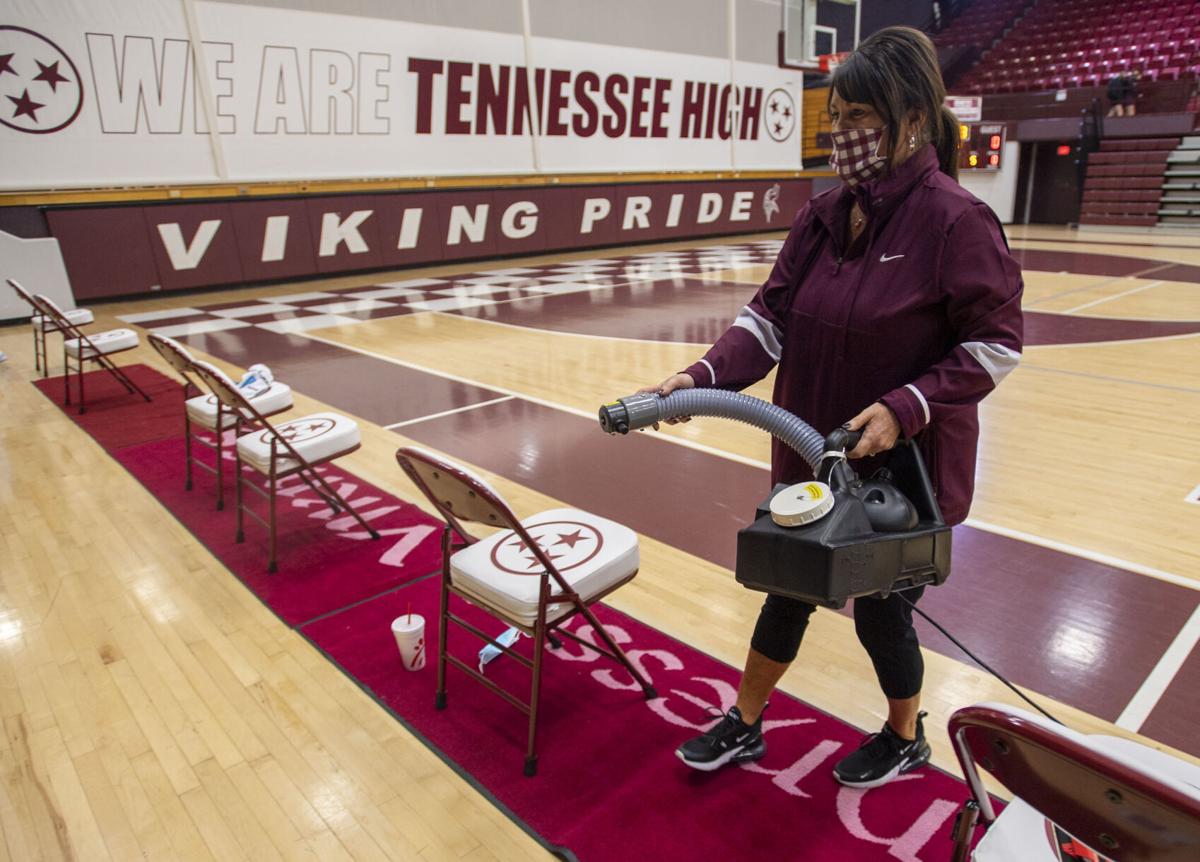 BRISTOL, Tenn. – The Sunday before Thanksgiving has long been a much-anticipated day for basketball fans in the region.

The Arby’s Classic field is revealed.

That won’t happen this Sunday, but that doesn’t mean the Arby’s Classic won’t be held. The COVID-19 numbers in the region will help determine a decision.

“Right now we are working on it,” Wade said. “We have got a plan in place, but of course with the numbers changing that plan could change. When we feel comfortable with coming out and making that announcement we will make the announcement final for sure.”

While Wade isn’t ready to release any participating schools, he did say they have commitments from two schools in North Carolina, one in Ohio and several schools in the middle Tennessee region of the state.

Among the differences according to Wade is it might not last as long as normal, and hope is that fans will be allowed.

“It will probably be shorter a day or two, but just as long as we can do it,” Wade said. “Hopefully we will be able to have some people in here too.”

Tennessee High has already started taking precautions for the basketball season, which began at Viking Hall on Thursday night with the Vikings and Sullivan South girls taking the floor.

Guidelines released earlier in the week included spectators being limited to parents, grandparents and siblings of participants. In addition, masks must be worn, social distancing principles should be followed and temperature checks will be performed upon entry to the 3,000-seat facility.

In addition, all seating will be on the upper levels of the facility, with fans from each team seated on opposite sides of the court. The lower seats have been pushed back, which allows the players and coaches to be separated on the sidelines.

“We are just making everybody sit up high, keeping them away from the kids and the officials,” he said. “The cheerleaders are wearing masks. We have got the benches social distanced right now so we are just trying to do everything to keep everybody safe for as long as we can right now.”

Wade said that spectators are asked to separate, which Wade figures shouldn’t be too difficult right now in such a large arena.

“Everybody has got to wear masks, get your temperature checked when you come in. Right now we are really limited on the number of people coming in so we have 3,000 seats that you can choose from,” he said. “We will, as the season goes, allow more and we will get it to where we mark for social distance, but right now we are just asking people to spread out.

“Keeping the teams and the communities separated, South sits on one side, our home team, Tennessee High, sits on the other side so we are just working to try to keep everybody safe.

It isn’t clear how long these restrictions will be in place.

“We have no idea,” Wade said. “We are just tickled to death we are getting to play and we are going to do it as long as we feel safe and we can get teams to play.”

Wade said if the Arby’s Classic is held, the Arby’s Holiday Hoops for Doc girls tournament will also be held at Viking Hall on Dec. 17-19.

Wade, who has received plenty of inquiries about the Arby’s Classic, hopes to have an announcement within the next 10 days.

“We have, but people have understood too,” he said. “We tell them the same thing. We hope we can make an announcement about it soon so we are working on a plan to try to have it and it is just going to go back to how the numbers work.”

Wade understands how much the Arby’s Classic means to the region, with basketball fans having marked that event as a must-see post-Christmas activity for nearly four decades.

The Tennessee High girls basketball team practices social distancing during the Vikings’ season-opening loss to Sullivan South on Thursday night at Viking Hall, which is currently limiting spectators and taking precautions to combat the spread of the coronavirus.

THS Lady Vikings head coach Kim Bright places name tags on the socially distance seats on the home bench prior to the start of their game with Sullivan South.