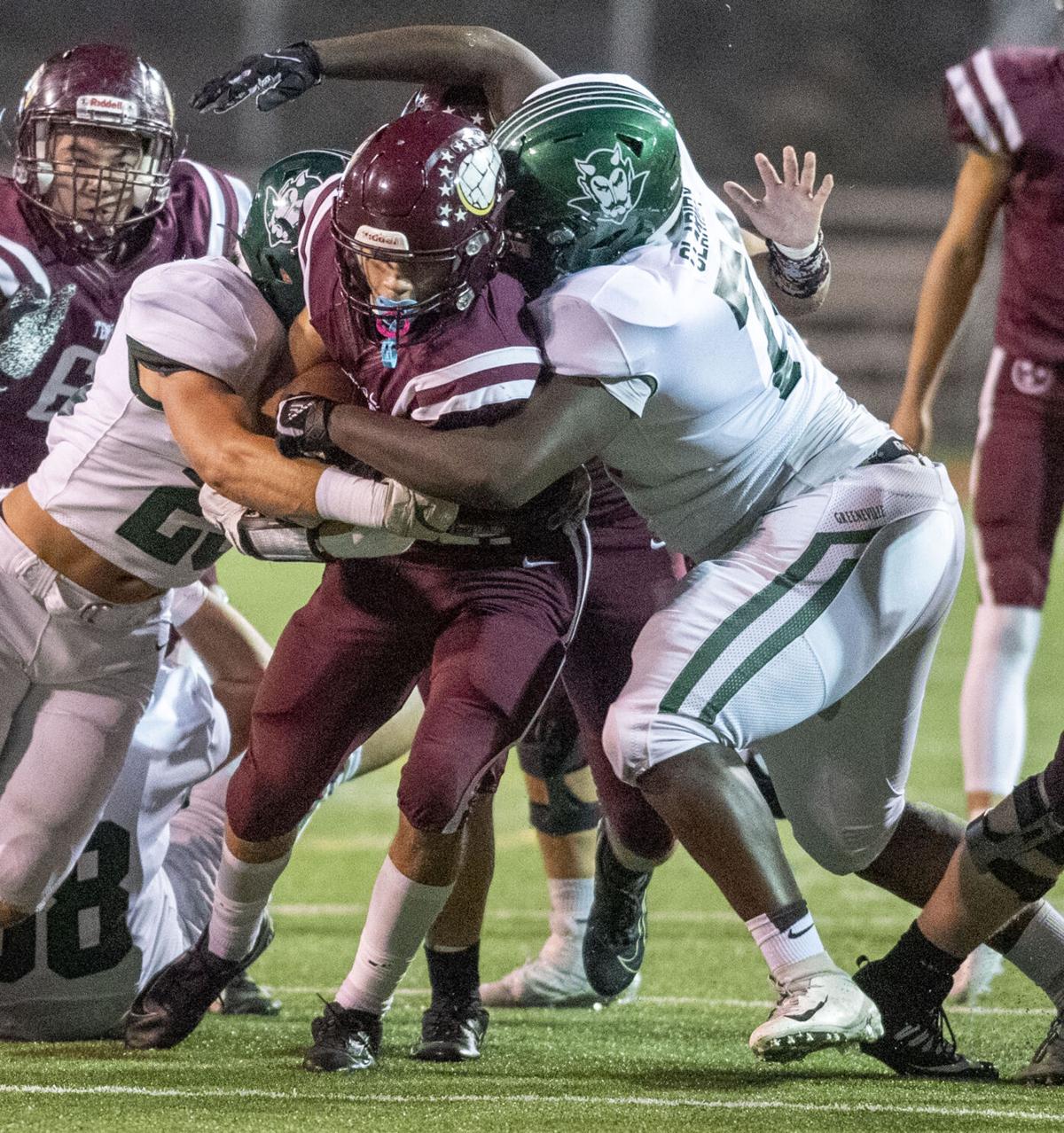 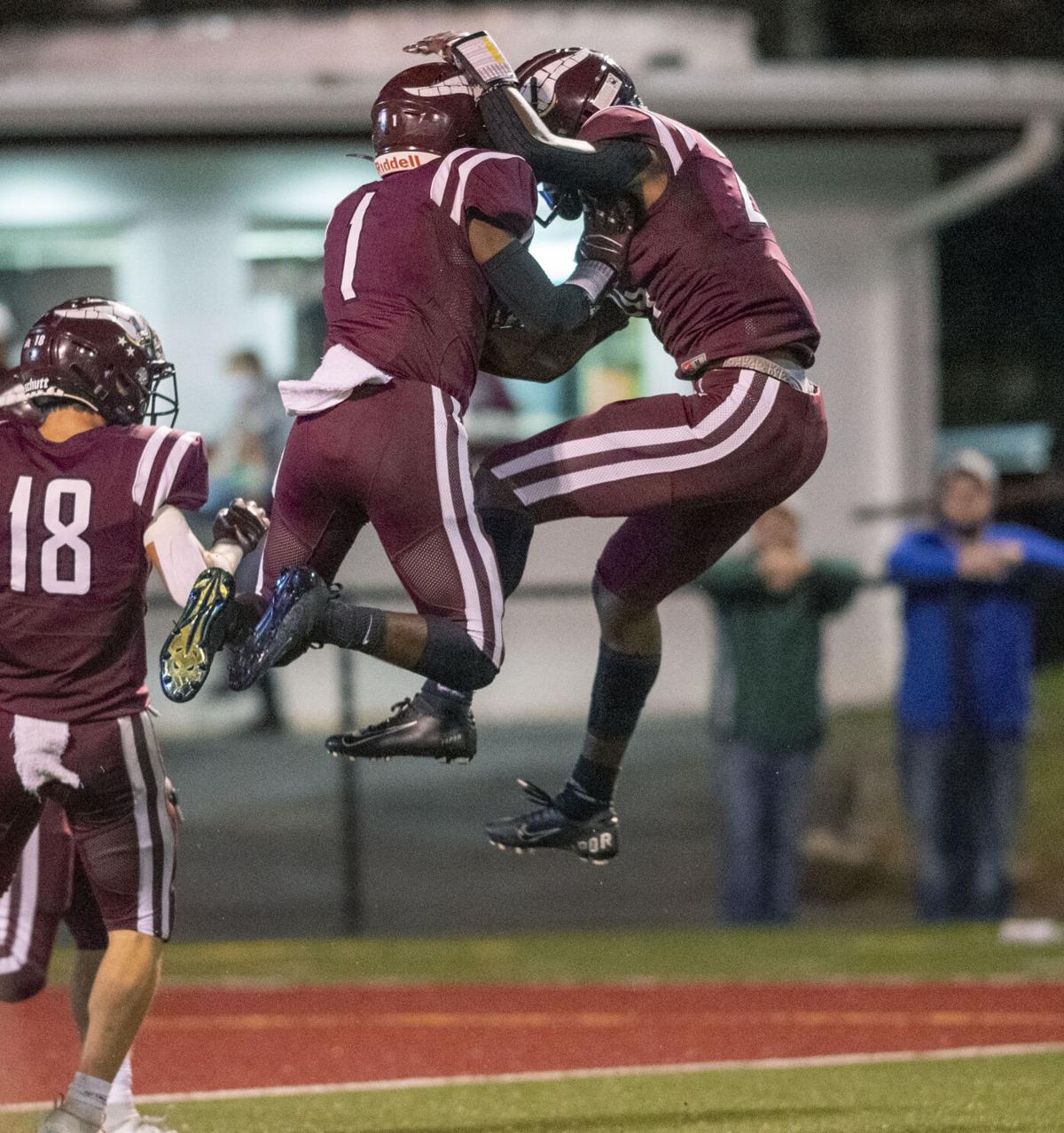 Tennessee High’s Nysaiah Foote, left, celebrates with Jaden Keller after Keller intercepted a Greeneville pass and returned it for a second quarter touchdown during the Vikings’ 28-24 loss to the Greene Devils on a rainy Friday night at the Stone Castle. Tennessee High’s CJ Henley (18) looks on. 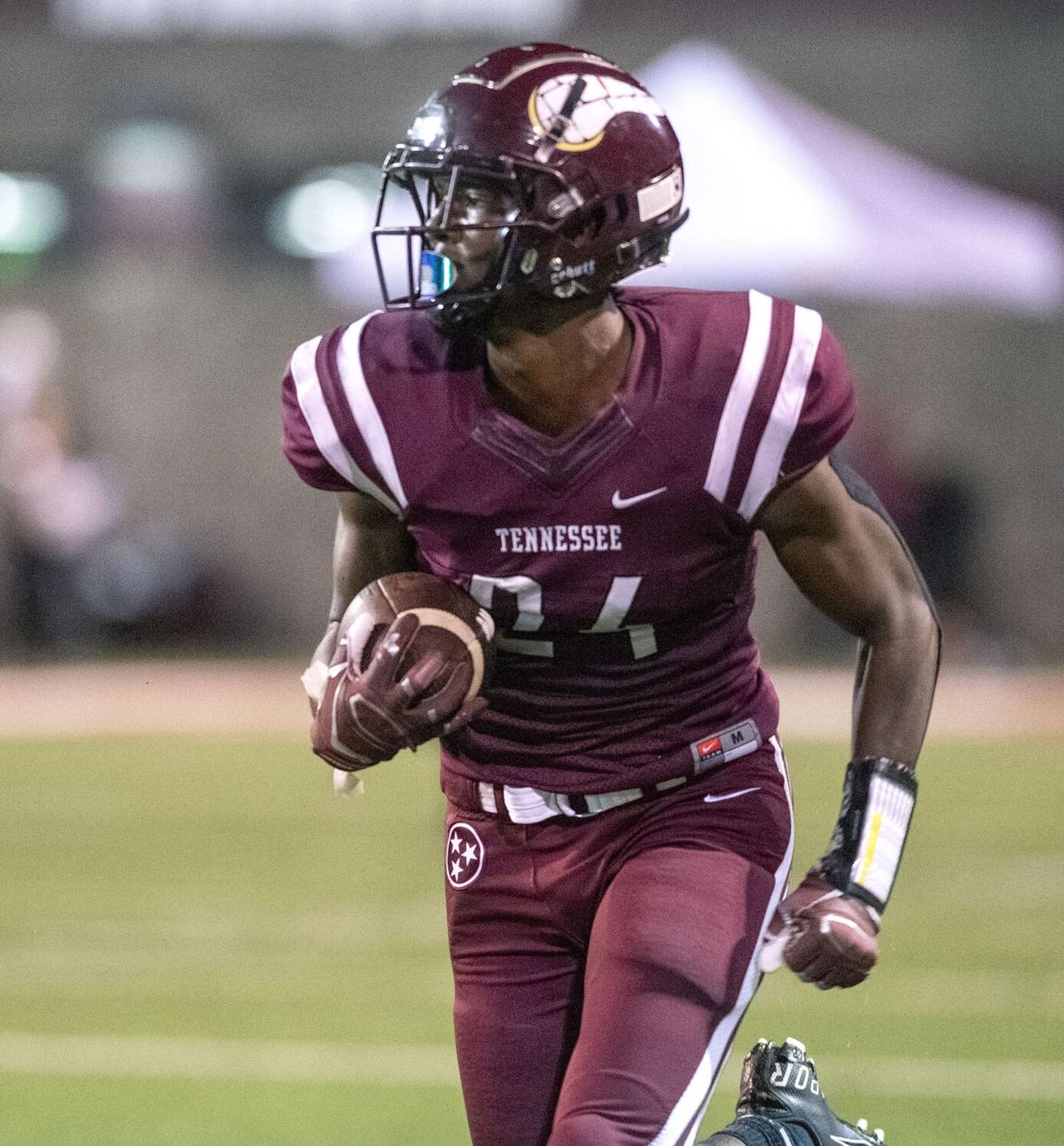 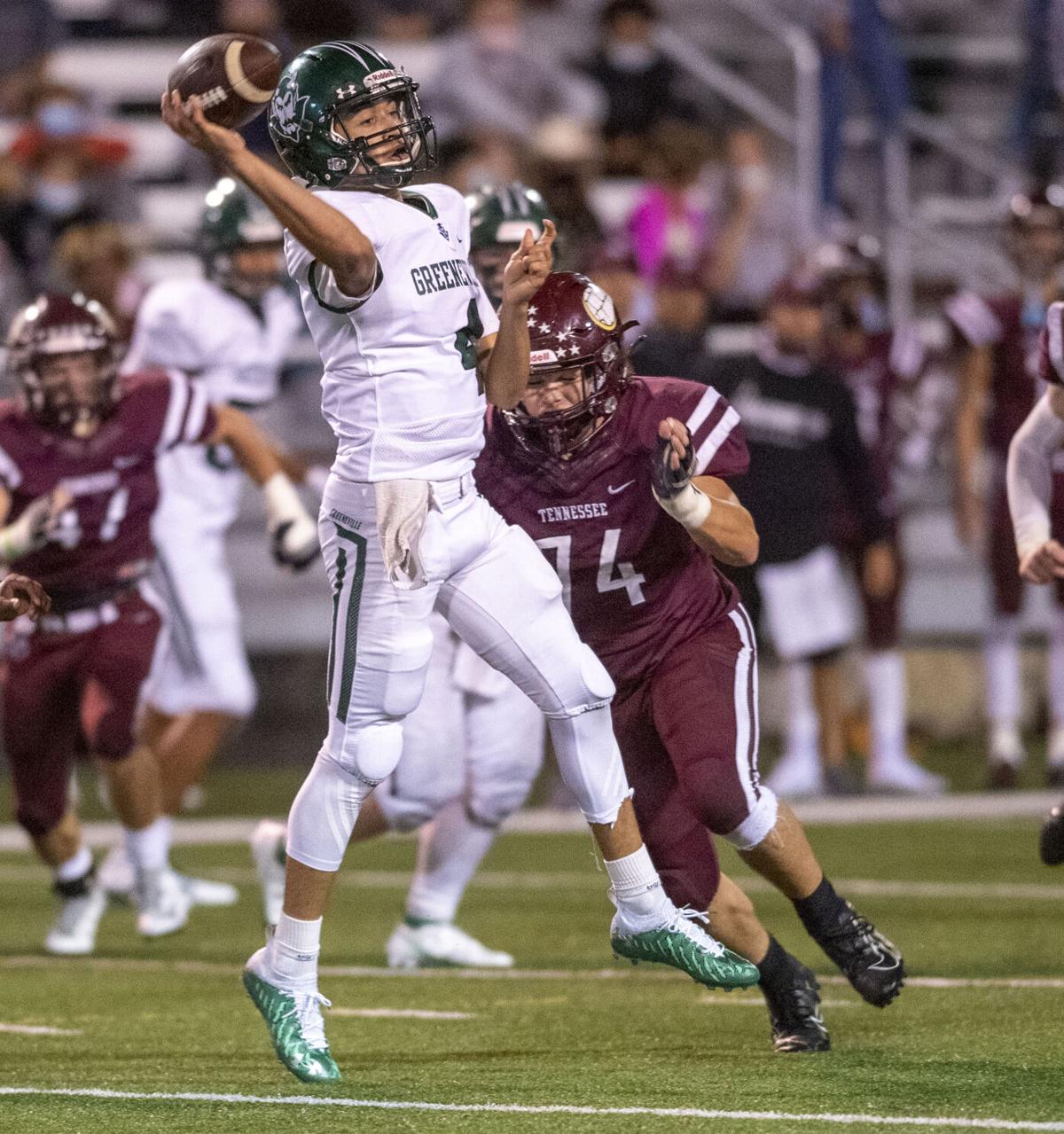 THS's Grant Ferrell hits Greeneville QB Izaiah Hall just as he releases the ball. The pass was intercepted by Jaden Keller and returned for a touchdown. 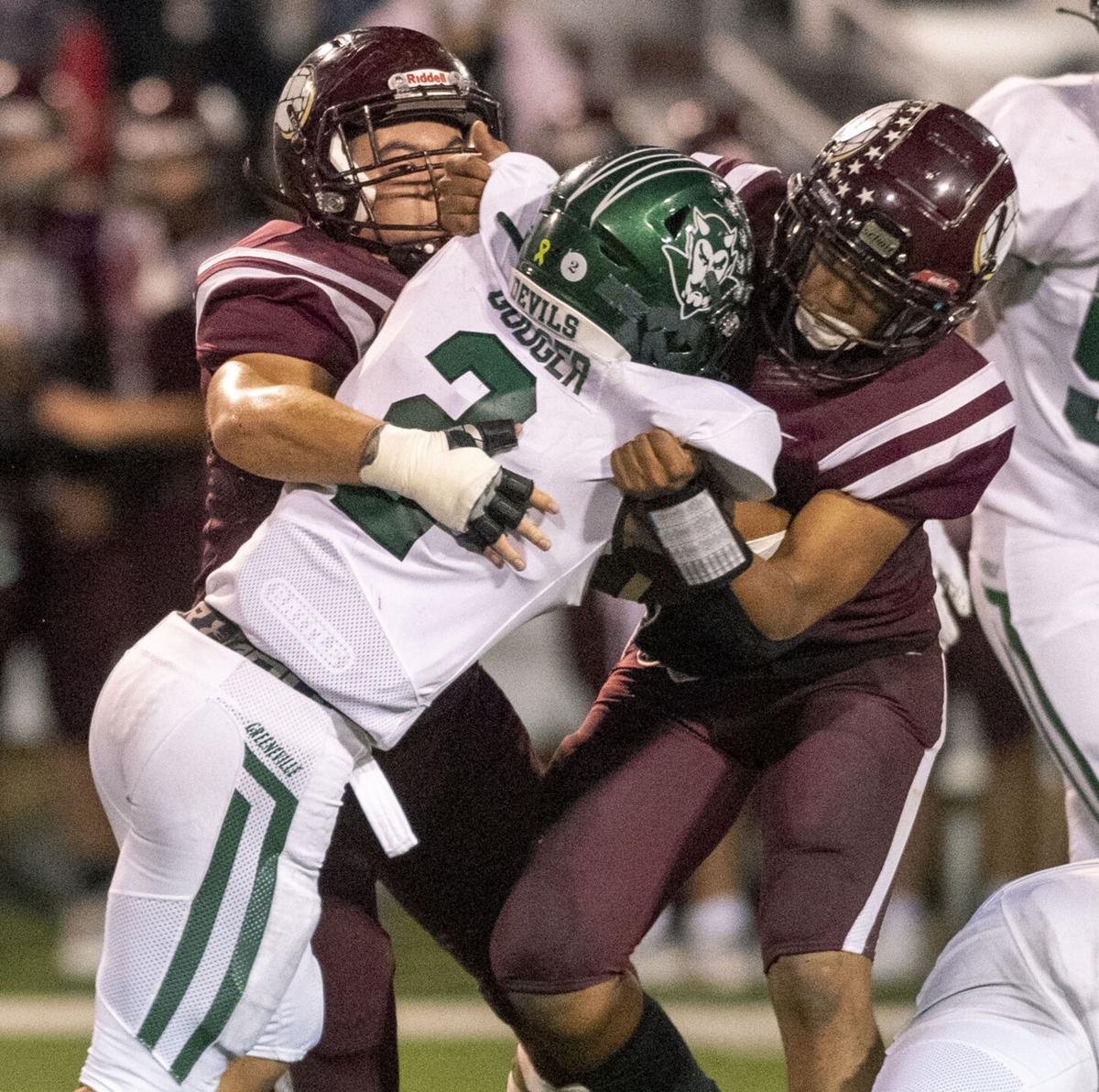 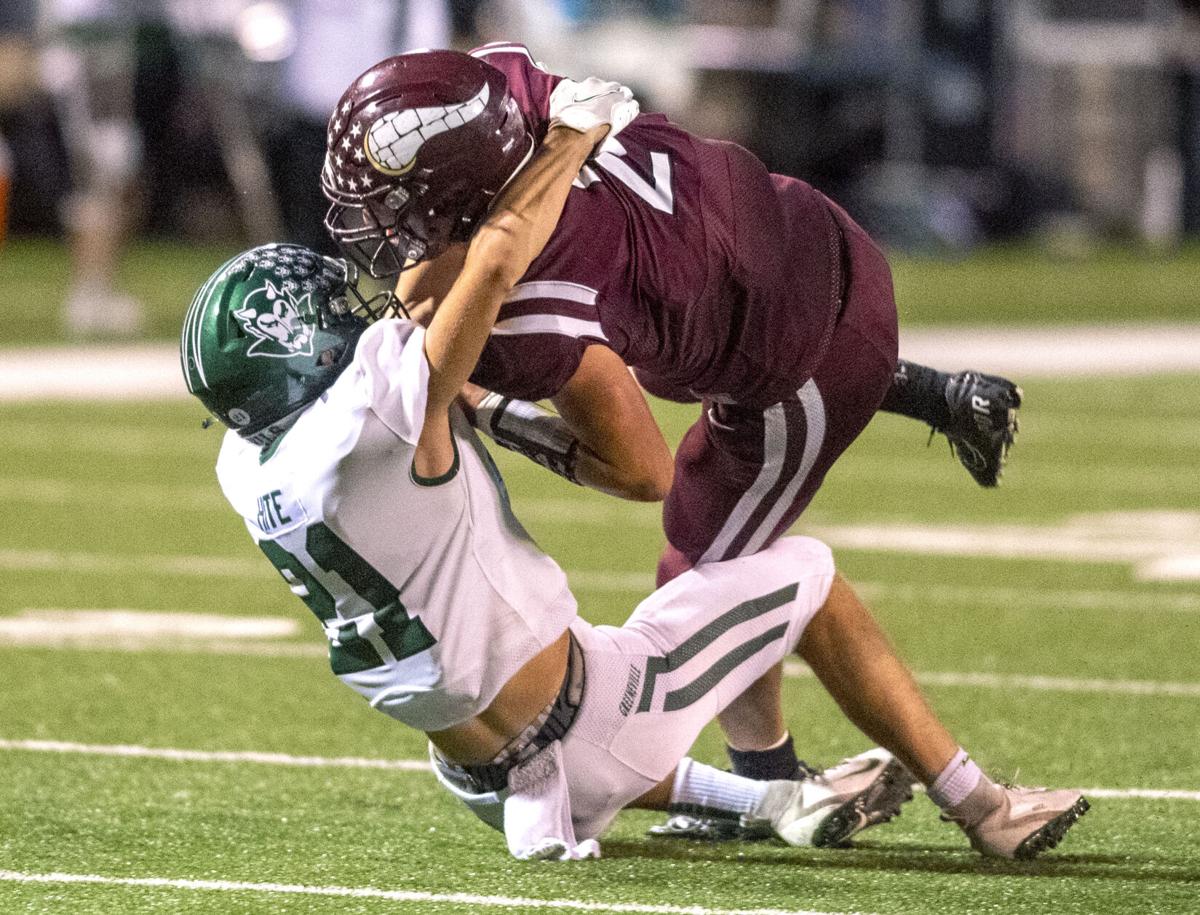 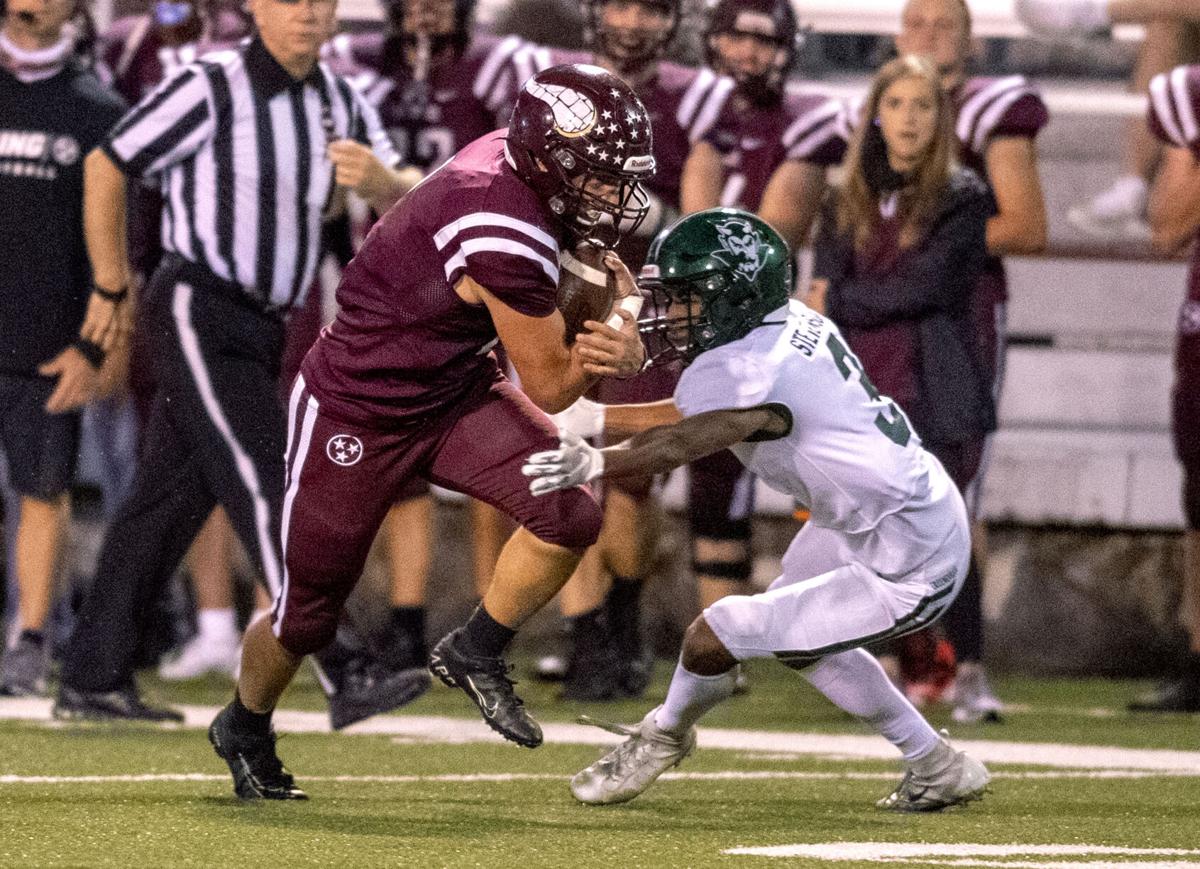 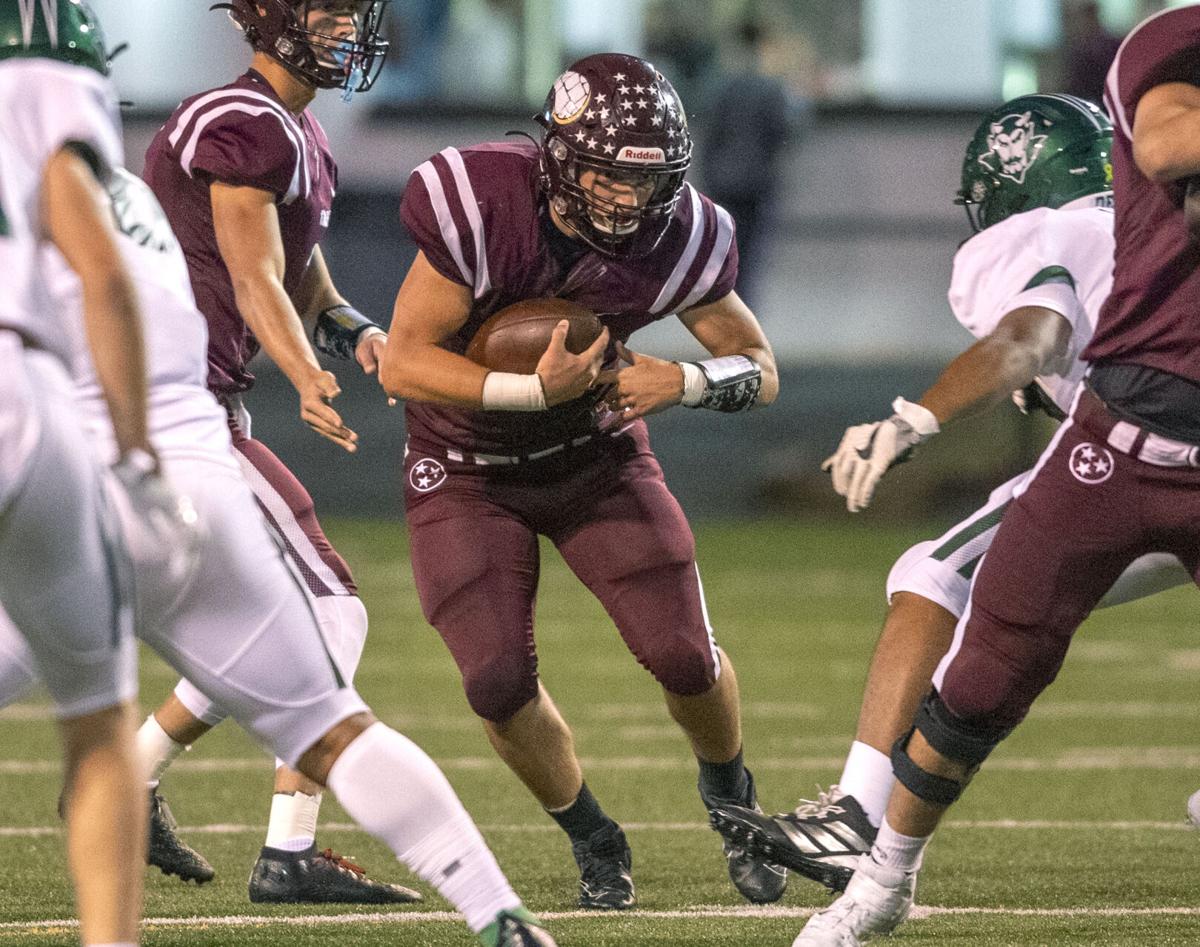 “On the way up here, I was nervous,” Quillen said. “My team helped me overcome it though.”

Playing with all the poise of a battle-tested signal-caller, Quillen threw two touchdown passes and also directed a game-winning scoring drive in the final moments as Greeneville took a 28-24 non-conference victory over the Tennessee High Vikings at the Stone Castle.

“When he caught that, we all went crazy,” Quillen said. “We had it in the bag.”

With regular QB Drew Gregg sidelined with an injury, Quillen stepped in and stepped up in a major way.

On the first offensive series of the game, he completed a 6-yard touchdown pass to Jakobi Gillespie on 4th-and-Goal to give the Greene Devils an early advantage and gained some confidence in the process.

That moxie was apparent after Tennessee High took its first lead of the game with 6:12 remaining on Jaden Keller’s 24-yard touchdown sprint that put the Vikings (3-2) up 24-21.

A lengthy kickoff return by Nick Iezzi put the ball at Tennessee High’s 46 and the Greene Devils went to work.

With Quillen at the controls, Greeneville (3-2) had a fourth-down conversion during a nine-play, 46-yard drive that was punctuated by Mason Gudger’s 16-yard TD run with 1:47 remaining.

He made good use of his playmakers – Gudger had 165 yards on 20 carries, Iezzi had four catches for 63 yards – and was protected by a strong offensive line.

“He played solid,” Mays said. “He made some clutch throws. That first TD pass was a good throw and he ran the offense pretty good. … They were able to have some success in the running game and that made it hard on us. We were having to stack the box and they ran some bubble screens on the outside and it hampered us in coverage. It was a do-or-die thing.”

In defeat, Keller was electrifying as usual.

When freshman Izaiah Hall spelled Quillen for a series in the second quarter, Keller intercepted a pass and returned it 54 yards for a TD with 4:16 left in the first half.

Keller had a touchdown run wiped off the board due to a holding penalty in the third quarter, one of many miscues that proved costly for the Vikings. Three turnovers were among the issues.

“Greeneville’s a good team and I thought we battled hard,” Mays said. “The kids didn’t quit. We’ve just go to clean up some mistakes. Against good teams it’s going to hurt you and it hurt us tonight.”

In the end, the night belonged to Quillen.

In the historic Stone Castle.

Facing a defense with hard hitters like Keller, Snyder, Marquis Phelps, Connor Bailey and a host of others.

The result was a first varsity start that will never be forgotten.

“He’s a kid that you can count on because he does all the little things and does ‘em right,” said Greeneville coach Eddie Spradlin. “He’s a great kid. He works hard all the time. It’s great for him to come out here and play like he did tonight – he stepped up and played big.”

Plus, he enjoyed that bus ride back to Greeneville.

“I just did what I had to do to help us win the game,” Quillen said. “It was a team effort.”

Tennessee High’s Nysaiah Foote, left, celebrates with Jaden Keller after Keller intercepted a Greeneville pass and returned it for a second quarter touchdown during the Vikings’ 28-24 loss to the Greene Devils on a rainy Friday night at the Stone Castle. Tennessee High’s CJ Henley (18) looks on.

THS's Grant Ferrell hits Greeneville QB Izaiah Hall just as he releases the ball. The pass was intercepted by Jaden Keller and returned for a touchdown.