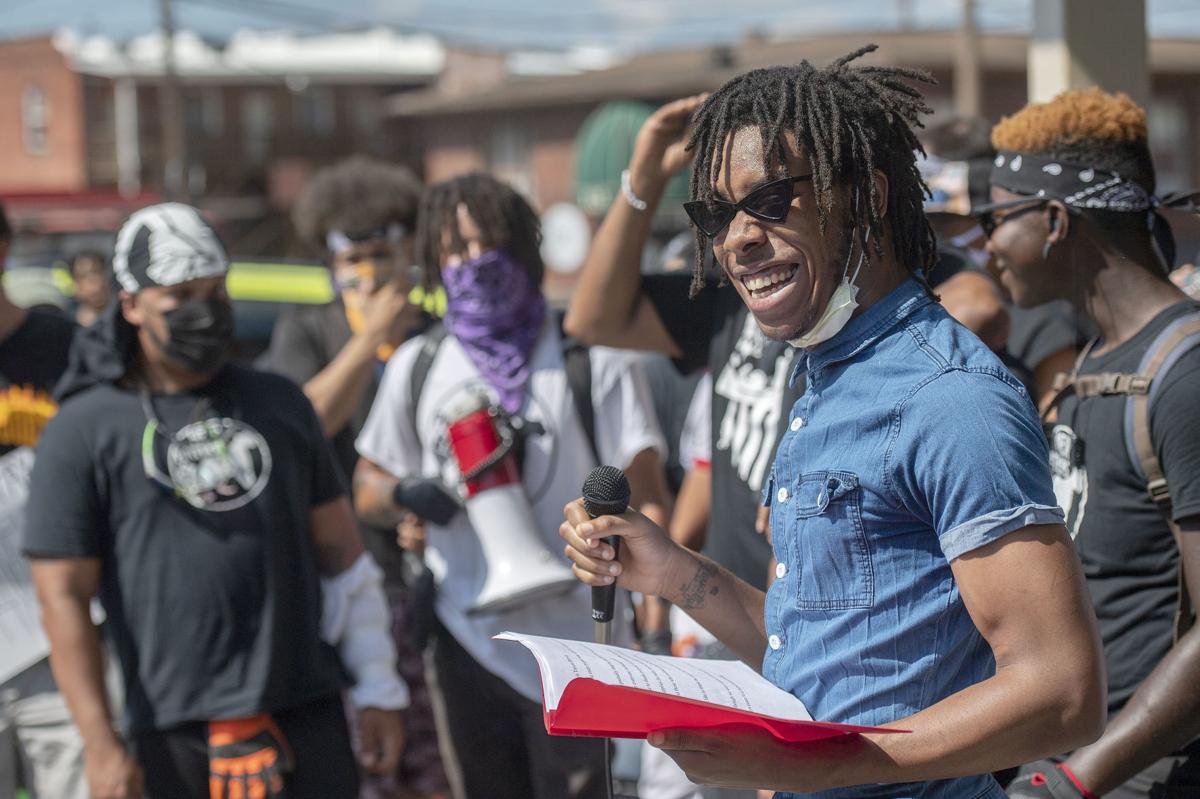 Travon Brown, 17, who had a cross burned in his Marion, Virginia yard, speaks to the crowd before the BLM march in Marion Friday afternoon. 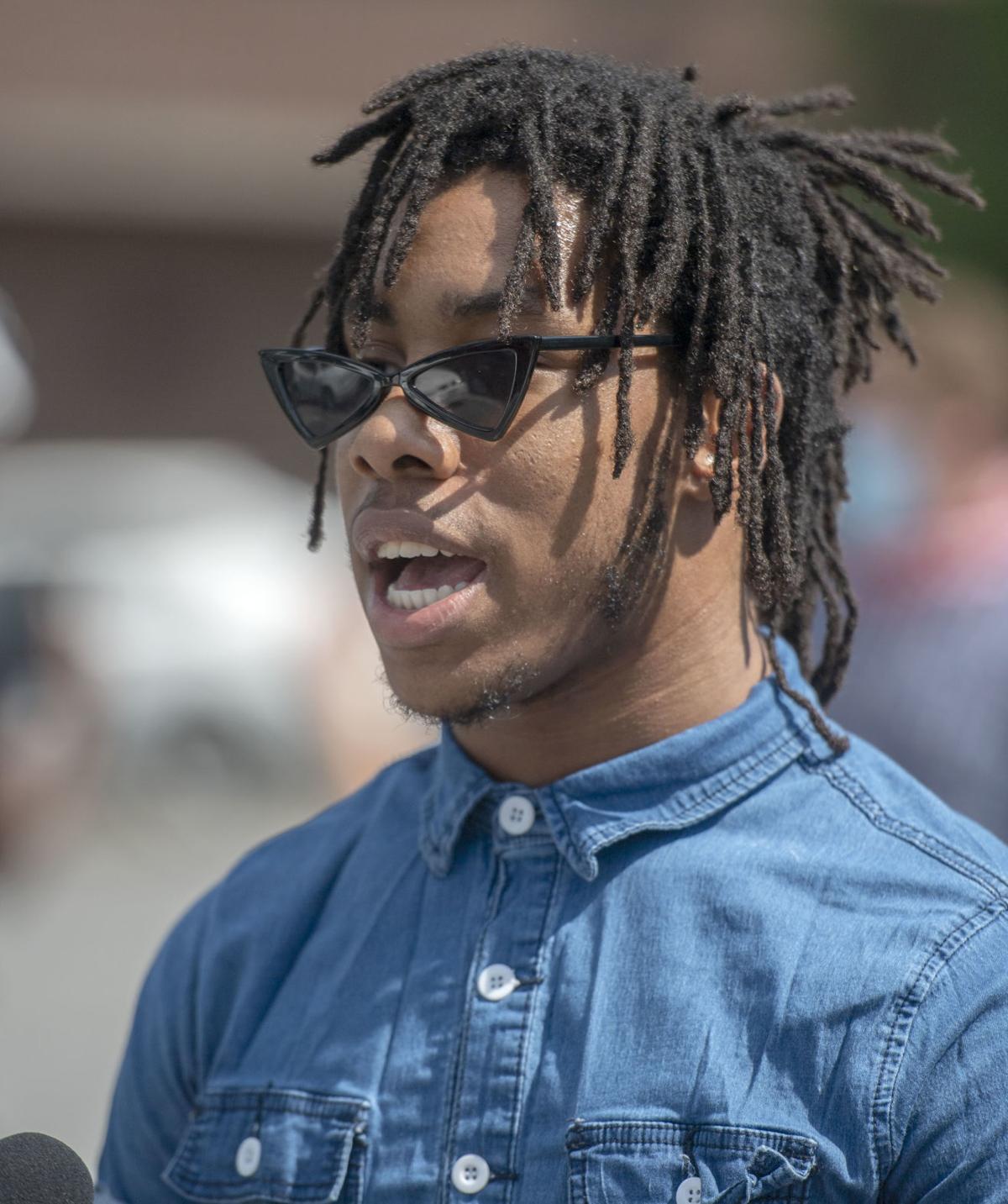 Travon Brown, 17, who had a cross burned in his Marion, Virginia yard, gives an interview before the BLM march in Marion Friday afternoon. 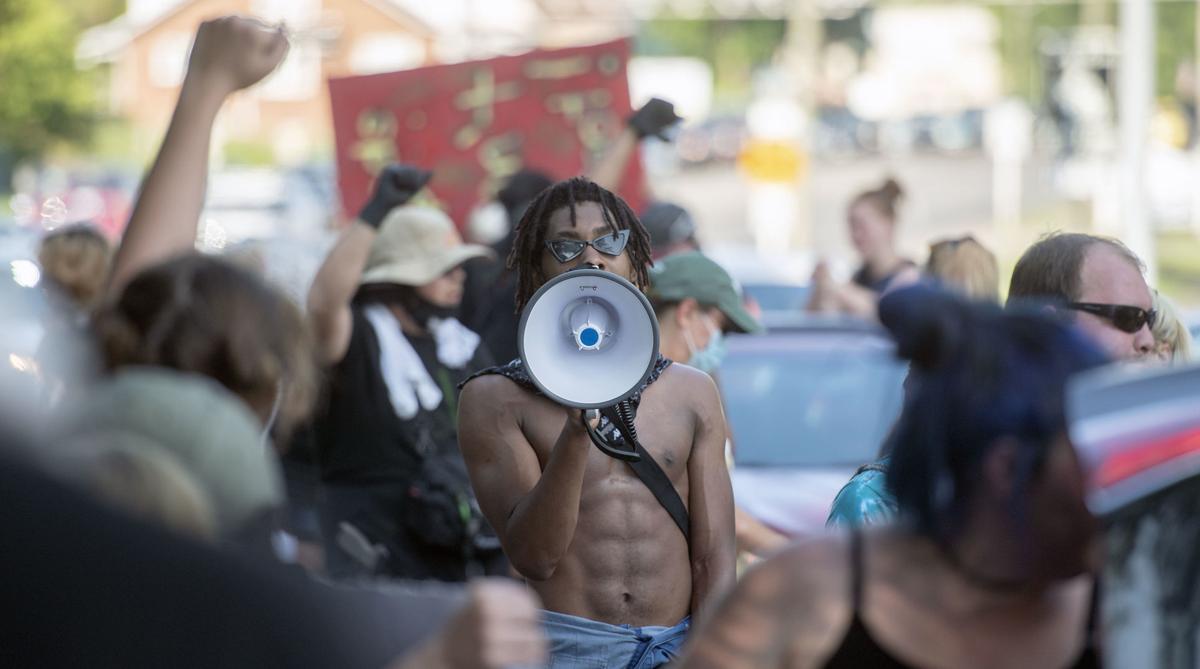 Travon Brown, 17, who had a cross burned in his Marion, Virginia yard, leads a chant during the BLM march in Marion Friday afternoon. 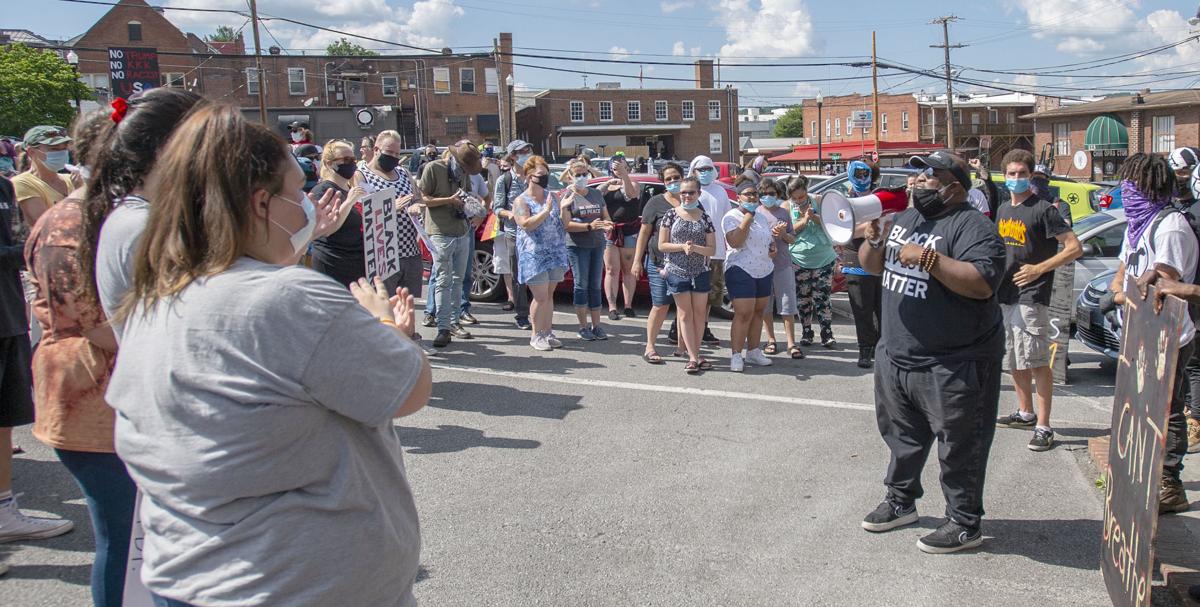 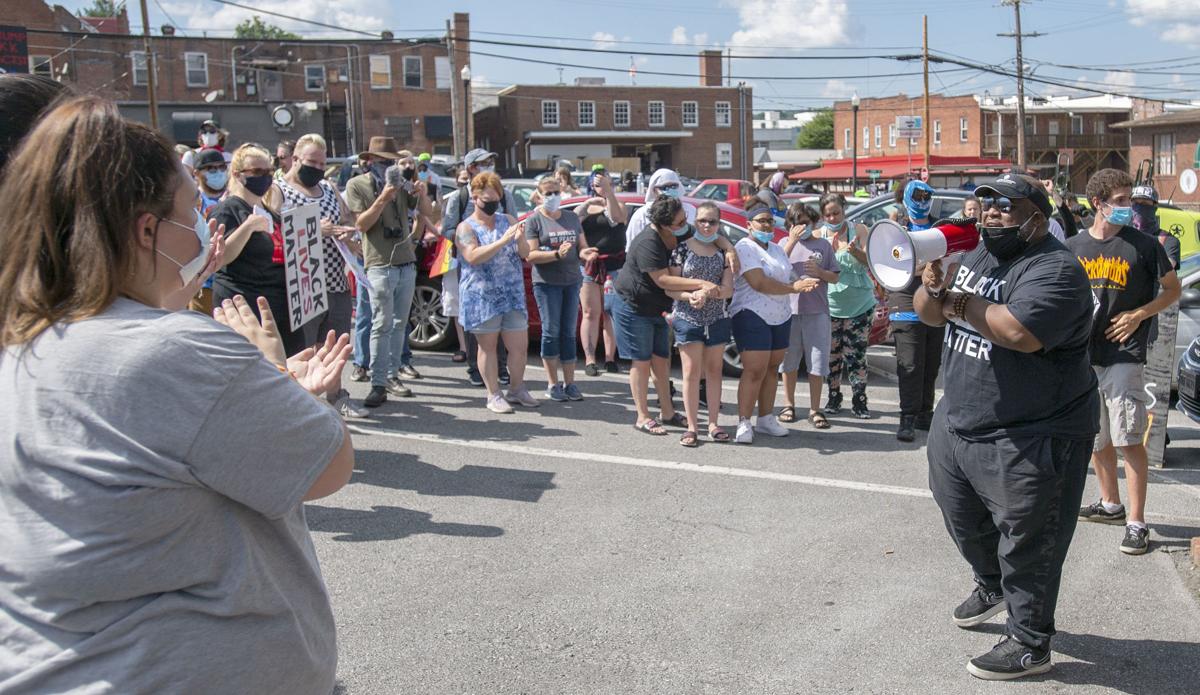 MARION, Va. — Nearly three weeks after authorities responded to a cross burning outside his home in Marion, Virginia, 17-year-old Travon Brown led over 200 people in a peaceful march through his small Southwest Virginia town on Friday.

Friday’s Black Lives Matter rally and march in Marion was the latest in a series of local protests for racial justice in the aftermath of the police killing of George Floyd in Minneapolis in May.

But Friday’s demonstrations also drew some the largest law enforcement presence seen thus far at a regional event, with over 200 officers from across a dozen agencies convening in a town that normally has a police force of about 20. In the days leading up to the event, local leaders shared concerns about incendiary commentary on social media and making sure the event and counterprotests would be safe.

More conservative-leaning groups planned counterprotests throughout Friday, with a large group of bikers calling themselves “American Patriots” arriving in Marion in the early afternoon. Dozens gathered near a Confederate monument outside a downtown courthouse, where at one point, many in the predominantly white crowd chanted, “All Lives Matter.”

People in the largely informal gathering downtown shared a variety of reasons for coming — some said they were there to simply celebrate the Fourth of July and picnic, while others talked about supporting law enforcement, standing up for Confederate history and counterprotesting the Black Lives Matter rally later in the day.

Early Friday afternoon, Afnan Beauti, a 23-year-old Emory & Henry College student and Marion resident, was one of the few people downtown with a “Black Lives Matter” sign. She said some people had flipped her off with middle fingers driving by, but others had stopped and talked with her.

“I’ve always been for the movement that advocates for the oppressed, which is Black lives, minorities, people who have been discriminated against and underprivileged for so long in this country. So I’ve always stood for that, and being a future health care provider, that’s something that I have to do,” she said.

Later in the afternoon, dozens started to meet at a downtown farmer’s market for the Black Lives Matter rally, which was also held in solidarity with the LGBTQ community.

Brown and other organizers with the New Panthers Initiative — a recently formed racial justice organization that has also been active in Johnson City, Tennessee — addressed the diverse crowd.

“The Black community needs support. All lives matter, but all lives can’t continue to matter until Black lives start to matter,” he later added, drawing cheers from the crowd as people raised their fists into the air.

Over the next two hours, the group marched to a Walmart parking lot and back, with police clearing the roads along the way.

Counterprotesters occasionally confronted the demonstrators, though officers worked to keep the groups separate from one another.

At one point, a group of bikers on motorcycles with American, Confederate and Trump flags pulled up outside a KFC and argued with demonstrators.

“I am not racist by any means,” one woman yelled at the Black Lives Matter demonstrators.

The protesters tried to explain that they were working to dismantle systemic racism, or the ways in which racism has become embedded in the structures that shape daily life, like law enforcement and education.

March organizers encouraged people not to engage with counterprotesters, who continued to verbally confront marchers along the route, several waving Confederate flags.

The march culminated with a gathering near the intersection of Commerce and Main streets downtown, where protesters sat and kneeled in silence for about eight minutes, roughly the amount of time that a Minneapolis police officer pressed his knee on George Floyd’s neck.

The marchers faced a large group of dozens of counterprotesters farther up Main Street, with both groups separated by metal barricades and officers.

As silence fell over the crowd, the only sounds in the air were police radios and chants from counterprotesters, which included “Trump 2020,” “U-S-A” and “We stand with law enforcement.”

When the eight minutes were up, some of the march organizers spoke into a megaphone.

“We are not going to let white supremacists bully our people anymore,” one said.

Another said it was time for the community to have conversations about “uncomfortable truths.”

One counter-demonstrator shouted across the street, “You have just as much equality as we do!”

“No we don’t — not with cross burnings,” someone in the march responded.

The cross burning case is currently moving through federal court.

Authorities have charged a Marion man named James Brown (no relation to Travon Brown) in connection to the June 14 cross burning, which followed a Black Lives Matter protest in the town on June 13.

James Brown, 40, faces charges of lying to federal agents and criminal interference with fair housing based on Travon Brown’s race.

At a preliminary hearing in Abingdon this past week, Magistrate Judge Pamela Sargent granted James Brown bond and said the charges will be sent to a grand jury.

As the rally winded down Friday and marchers returned to their cars, Travon Brown said the night of the cross burning “doesn’t even pop up in my head unless I’m talking about it.”

Still, Brown said he worries about his family’s safety amid the ongoing activism.

“I’m not able to go to sleep some nights, I stay up ’til 4 or 5, just because I’m worried what might happen to my mom because I’m out here marching,” he said.

On Friday evening, Marion’s police chief, John Clair, said he was not aware of any arrests or major injuries.

“What you saw was everyone having the opportunity, with almost equal time and equal space, the ability to express their constitutional rights. I think that was most prevalent at Main and Commerce, where everybody had the chance to assemble at a safe distance, say what they needed to say,” Clair said.

William L. Ward, the pastor of Hood Memorial AME Zion Church in Bristol, Tennessee, who attended Friday’s rally, said, “The real work is going to happen after we finish protesting.”

For Travon Brown, he said that work includes getting people to show up to the polls, making schools more inclusive spaces and helping the community understand the everyday forms of discrimination people of color face.

“Some people said they’ve lived in Marion for 20 years and haven’t seen racism — just because you don’t see it doesn’t mean it doesn’t exist,” Brown said.

The racist “noose” claimed by NASCAR driver Bubba Wallace was a garage door rope in use last year, and the FBI deemed it not a racial incident…

Your View: As in past, USA’s inherent rebel spirit causing troublesome rift

Questioning authority has always been a central theme of the American spirit. Today we are seeing that mentality front and center from both sides of the political spectrum.

Travon Brown, 17, who had a cross burned in his Marion, Virginia yard, speaks to the crowd before the BLM march in Marion Friday afternoon.

Travon Brown, 17, who had a cross burned in his Marion, Virginia yard, gives an interview before the BLM march in Marion Friday afternoon.

Travon Brown, 17, who had a cross burned in his Marion, Virginia yard, leads a chant during the BLM march in Marion Friday afternoon.