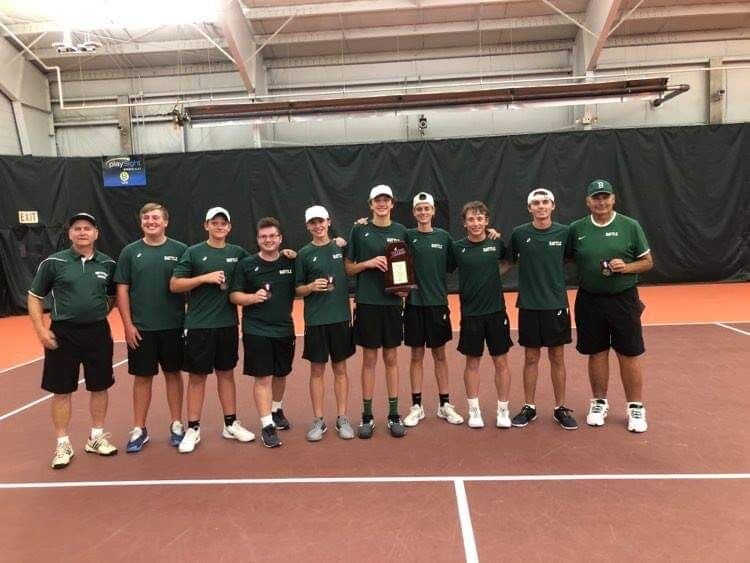 The John Battle boys tennis team is all smiles after capturing the Class 2 state championship with a 5-0 win over Poquoson on Thursday at Virginia Tech’s Burrow-Burleson Tennis Center. 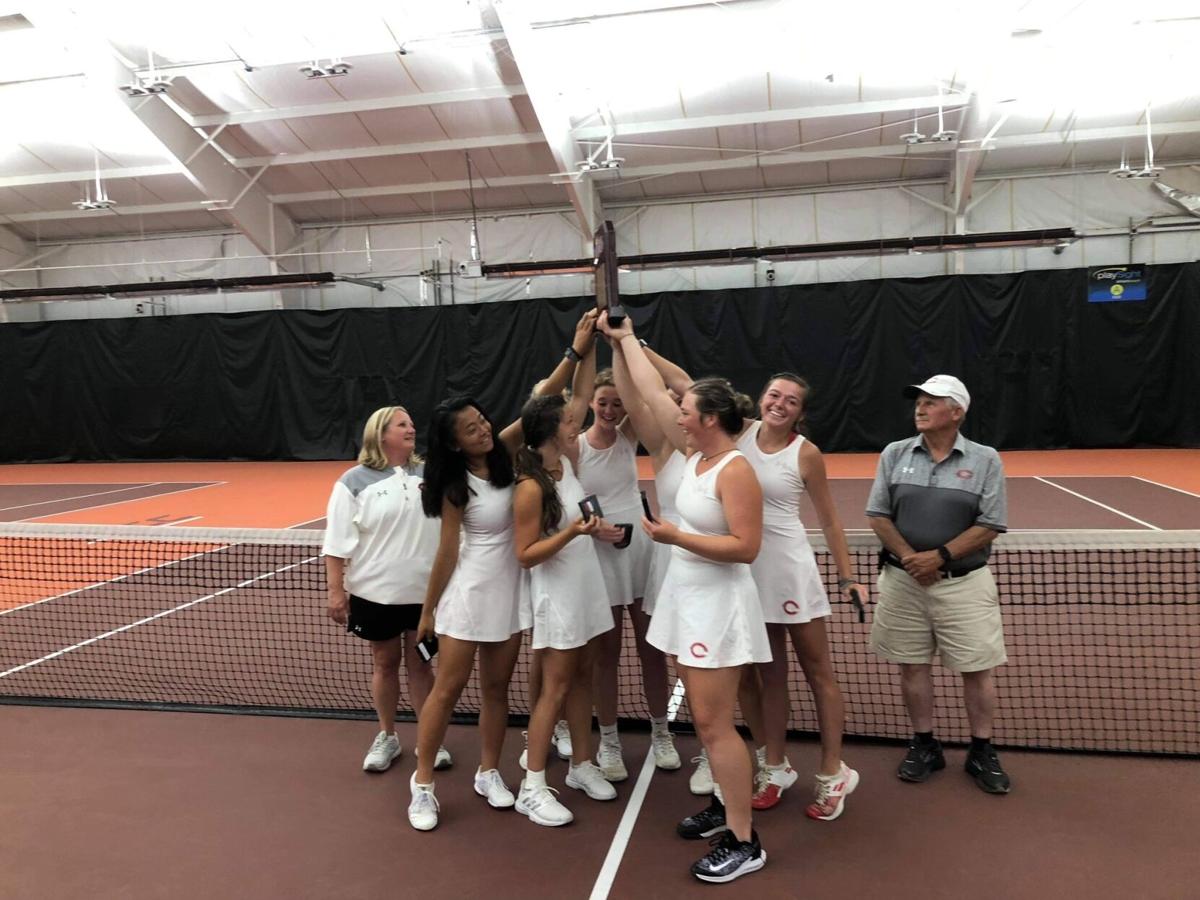 The Wise County Central girls tennis team celebrates with the trophy after defeating Poquoson 5-0 to capture the Class 2 state championship on Thursday at Virginia Tech.

Following a Thursday morning of traffic jams on Interstate 81, an afternoon of endless rain and delays, and an evening of heat and tension inside the Burrows-Burleson Tennis Center at Virginia Tech, the John Battle Trojan boys and Wise County Central Warriors girls earned their first VHSL Class 2 team tennis titles.

John Battle and Wise Central both posted 5-0 decisions over Poquoson.

“It’s just unbelievable,” Sholes said. “I’ll be honest, I wanted to win a state championship before I got out of coaching. I could not be prouder of these guys.”

For the Wise Central girls, the big trophy builds on the long run of success authored by the J.J. Kelly girls. J.J. Kelly consolidated with Pound in 2011 to form Wise Central.

The tone was set for the Warriors by a familiar face. Senior Hannah McAmis overcame a painful injury to take a 6-1, 1-6, 6-3 victory at No. 1 singles.

“I’ve played through a broken big toe since November,” said McAmis, as she sought an ice bag. “During the heavy period for COVID-19, some friends would get together to play soccer and I kicked for the ball at the same time as another boy. I was not about to miss my senior year, though.”

“This is where we all wanted to be since our freshman years, and we’ve all worked for it,” McAmis said.

Both Class 2 team matches were scheduled to begin at noon. But that plan went off course when the rains came and tournament officials were forced to move the Class 1 and Class 3 girls title matches to the inside courts at Burrows-Burleson.

So how did Central (12-0) endure before finally taking the court just before 2:30.

“We waited in vans and ate peanut butter sandwiches,” Central coach Angela Duncan said. “Our girls are just competitors, and that mental toughness showed along with their experience. We have five seniors and they’ve been together since eighth grade.”

The lousy weather did not dampen the celebration by the large Central fan contingent.

“This is not the typical scenario we imagined,” McAmis said. “We were thinking of a beautiful day for the state tournament. It poured rain after we showed up, but we played through it and got the job done.”

John Battle (11-2) adjusted in style, winning every match in straight sets to complete a long quest for a tradition-rich program.

The hit squad for Battle was led by top-seeded senior Peyton Mumpower, who won by a 6-2, 6-3 margin.

Spurling doesn’t need a history lesson on the John Battle program and for tennis across far Southwest Virginia.

“This win means pretty much everything for John Battle,” Spurling said. “We’ve tried for like seven years now to win state. I’ve checked the school trophy case and I know the players who helped build this tradition.”

That’s another reason why the Trojans gravitated around their emotional coach late Thursday.

“We know how Coach Sholes wanted this trophy, and that made us want it even more,” Spurling said.

The tireless Collin Davidson displayed brains and technique en route to his 6-1, 6-4 victory at the No. 2 spot.

“I was pretty satisfied with my match,” Davidson said. “We didn’t know anything about Poquoson, and that can be a positive in regard to expectations and dealing with pressure. We couldn’t plan in advance, but we kept each other pumped.”

Collin Davidson is an honor student who hopes to become an engineer. Naturally, he took a smart route during the rain delay.

“Hydration is important on a long day like this, so I tried to drink a lot of water and stay hydrated because it’s very hot playing inside here,” Davidson said. “For breakfast, I went with a salad instead of heavy foods. I look like I just came out of a swimming pool because I’m so wet, but it was a good day.”

“These kids believed in themselves and never became rattled,” Sholes said. “They’ve all got different style games and they worked together for the same goal.”

“Today was a statement for tennis in Southwest Virginia,” Collin Davidson.

NBA Finals: What is the best result for the books?

Should there be concern around the Yankees?

Should there be concern around the Yankees?

The John Battle boys tennis team is all smiles after capturing the Class 2 state championship with a 5-0 win over Poquoson on Thursday at Virginia Tech’s Burrow-Burleson Tennis Center.

The Wise County Central girls tennis team celebrates with the trophy after defeating Poquoson 5-0 to capture the Class 2 state championship on Thursday at Virginia Tech.