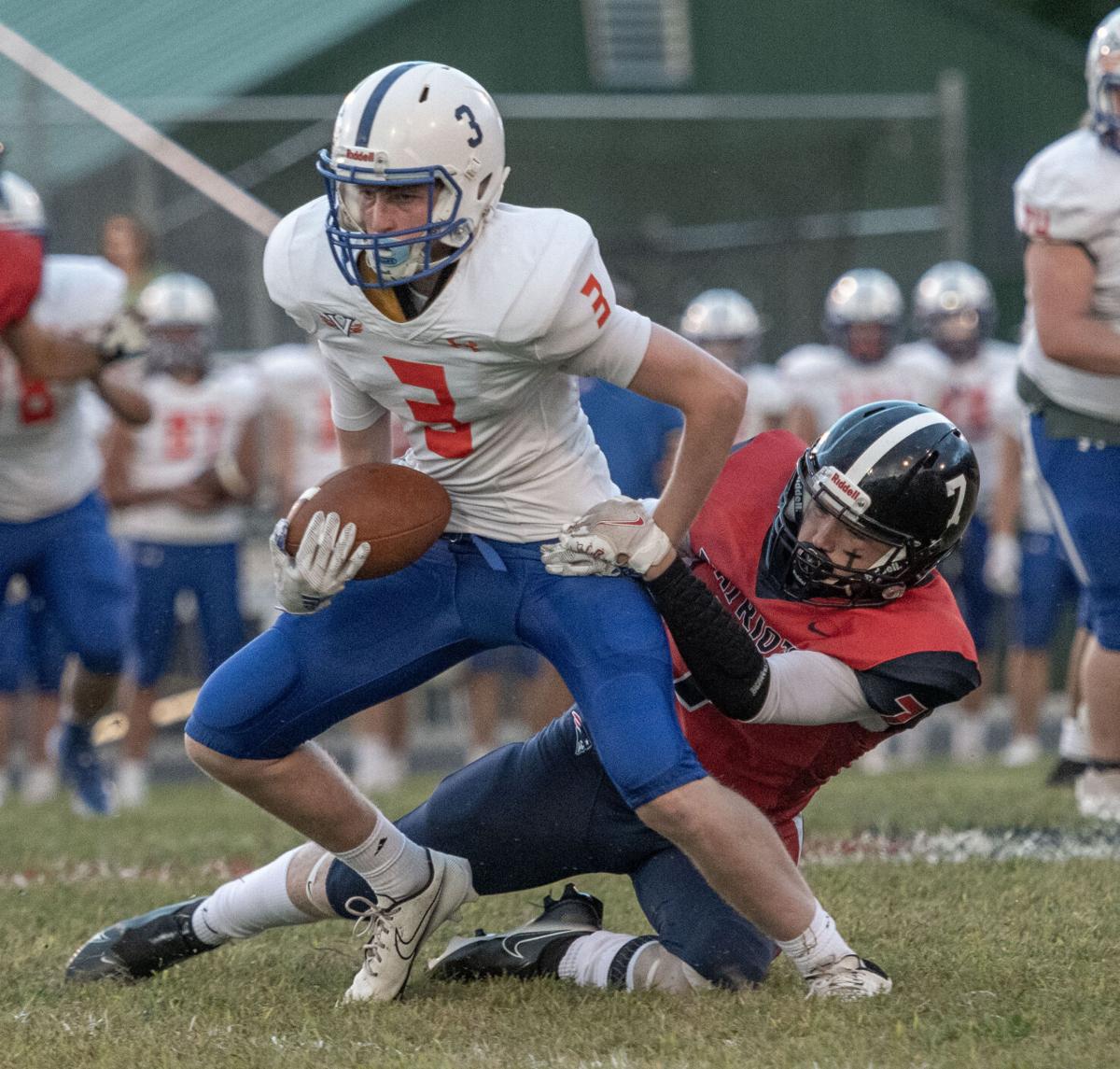 Volunteer's Heath Miller gets tangled up with Sullivan East's eth Chafin on Friday. 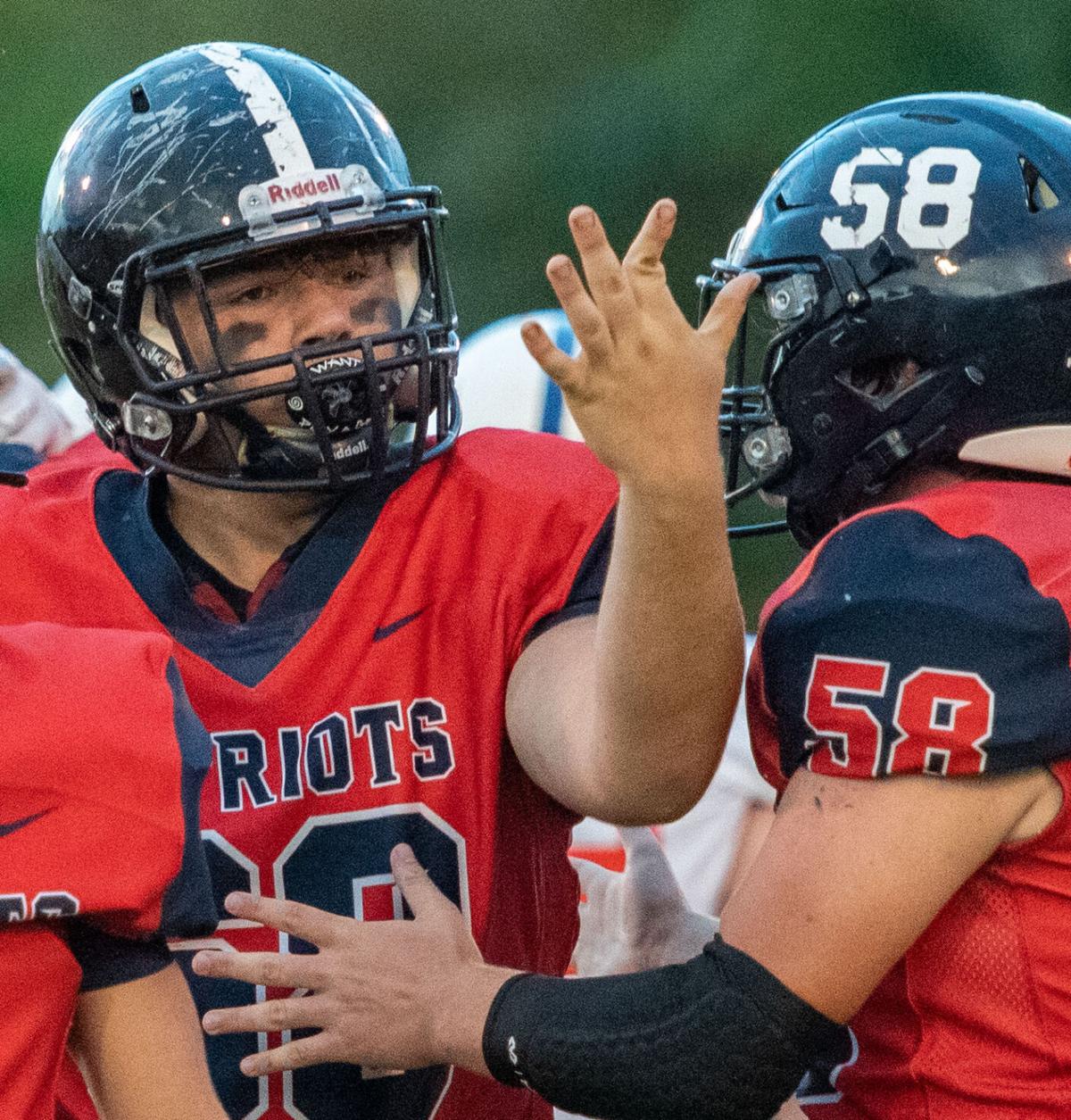 Sullivan #68 Nick Sakellar dislocates his finger on a play during game against Volunteer. 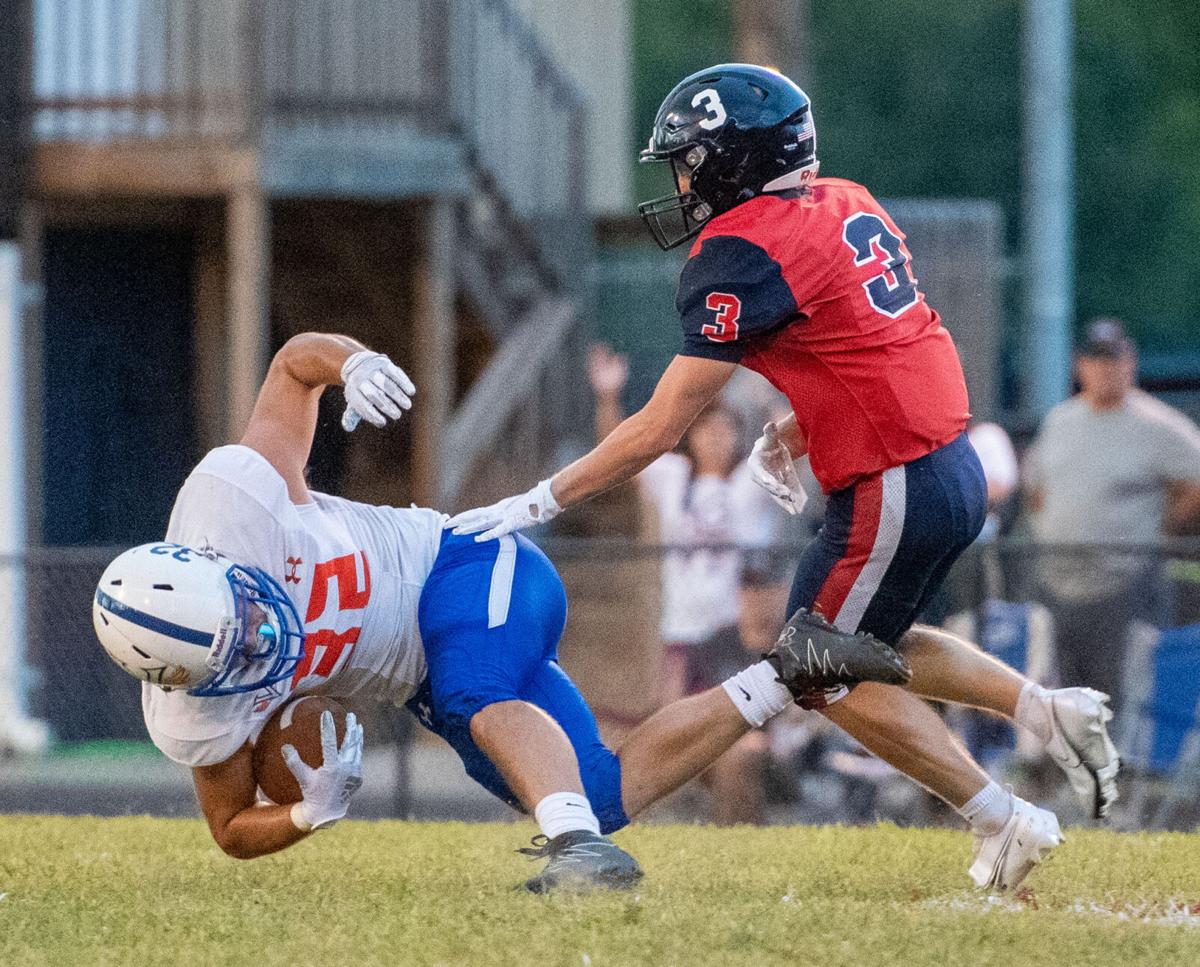 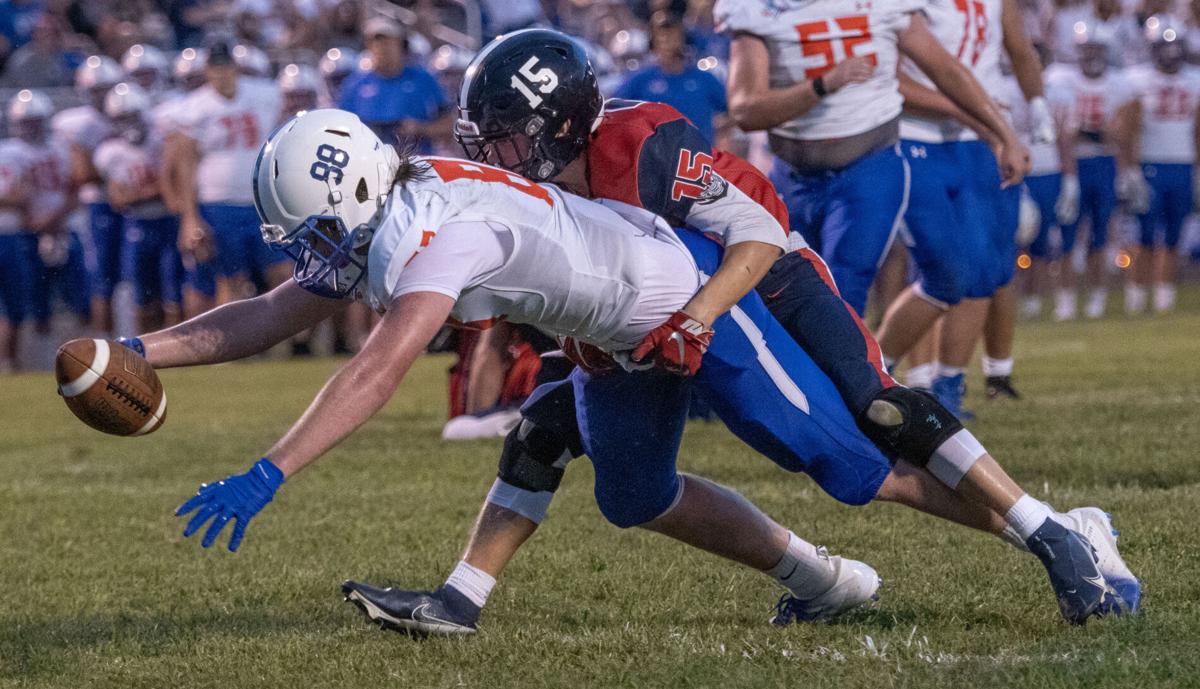 Sullivan East #15 Hunter Brown tries to hold back Volunteer #88 Caleb Scott but the touchdown was good. 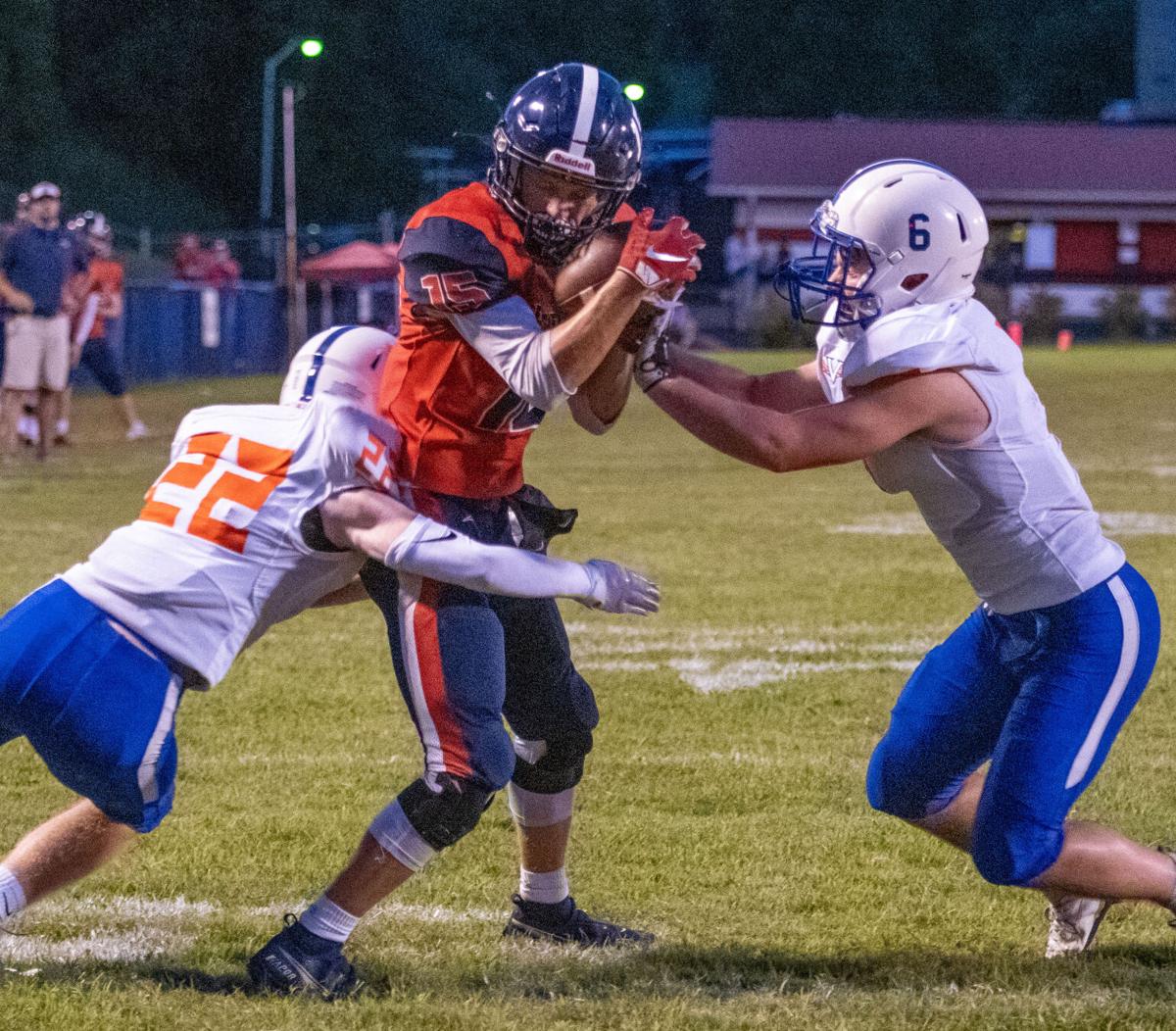 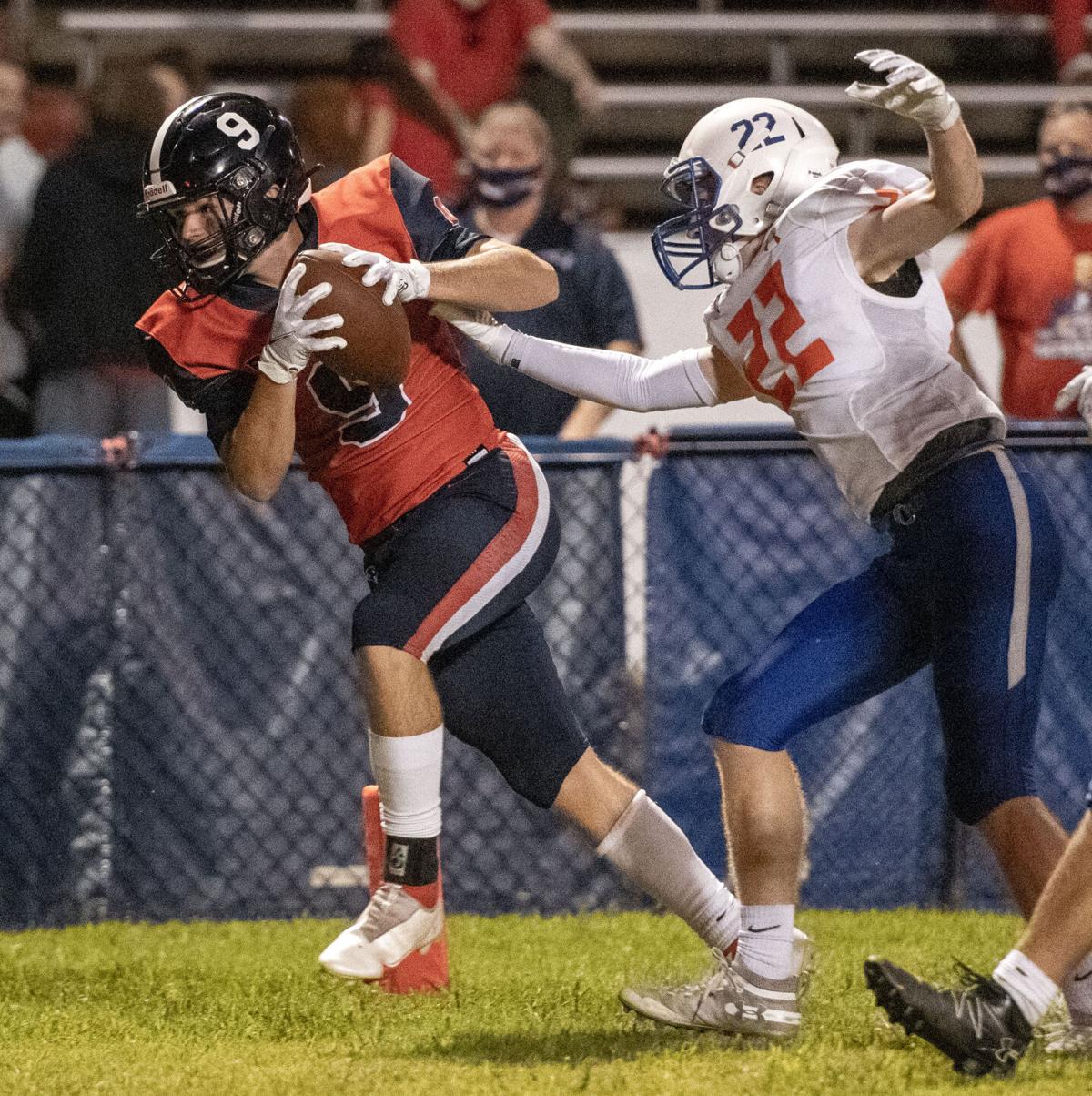 Sullivan East #9 Luke Hare scores as Volunteer #22 Colby Lawson is too late to stop the score during the first quarter. 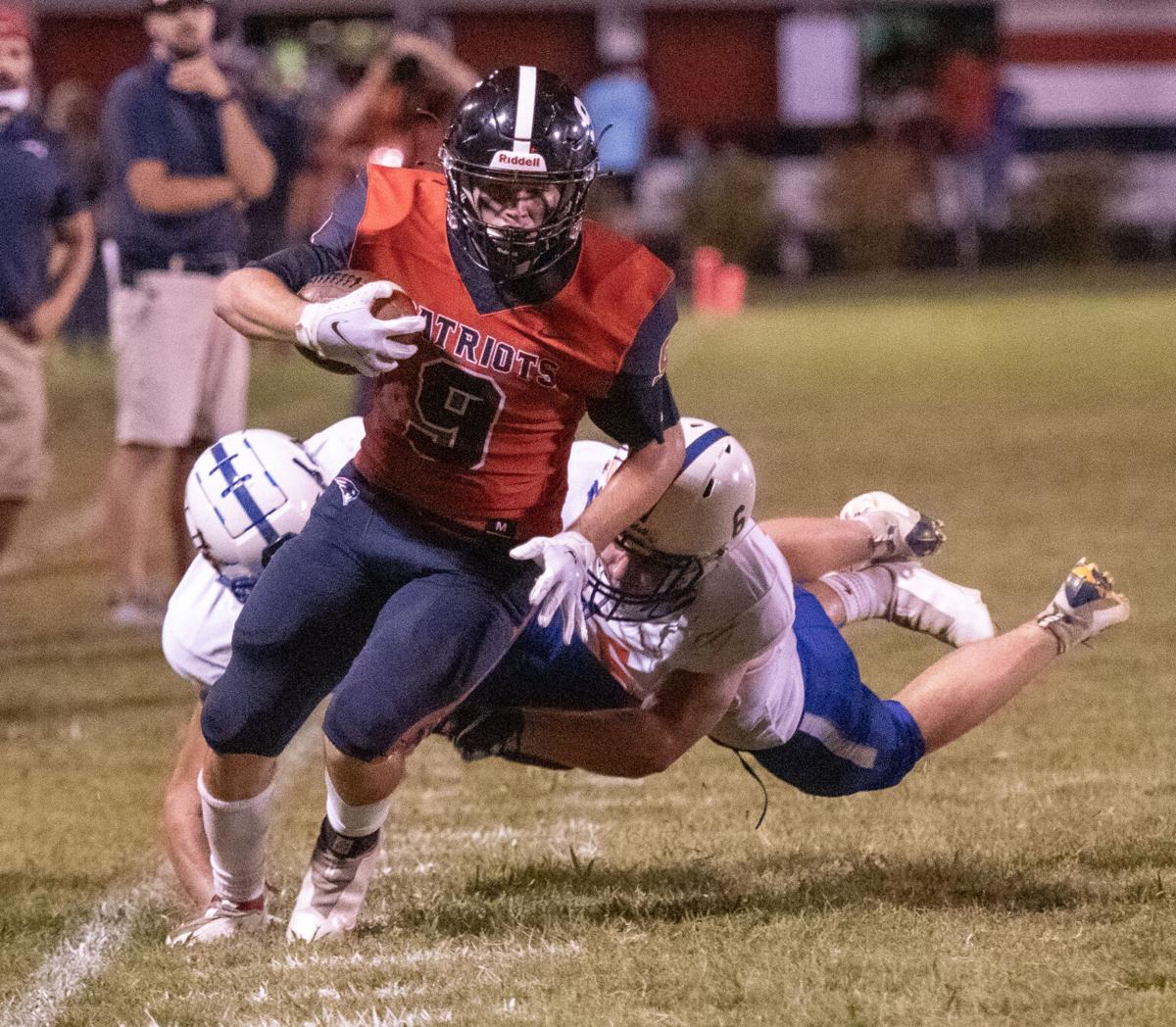 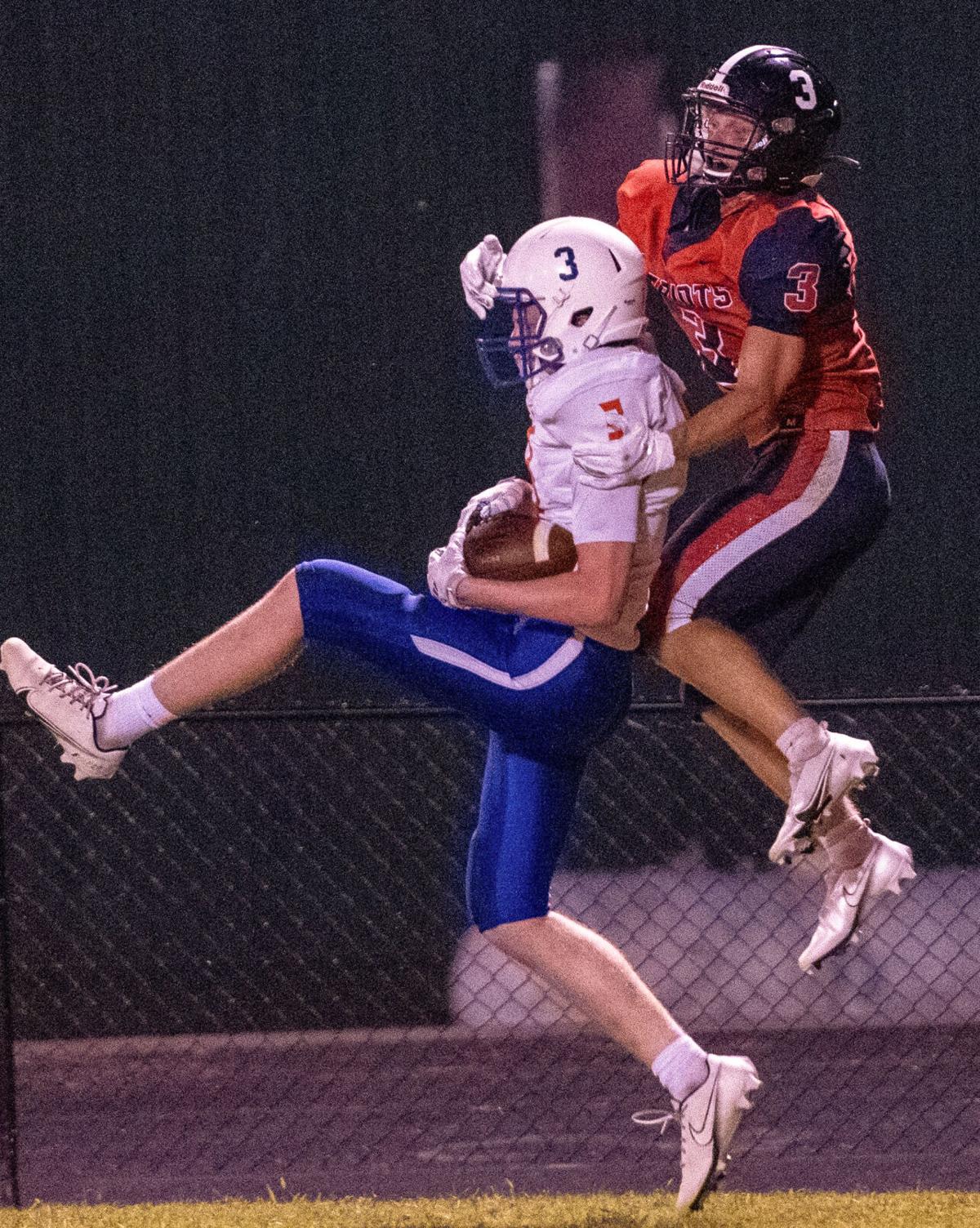 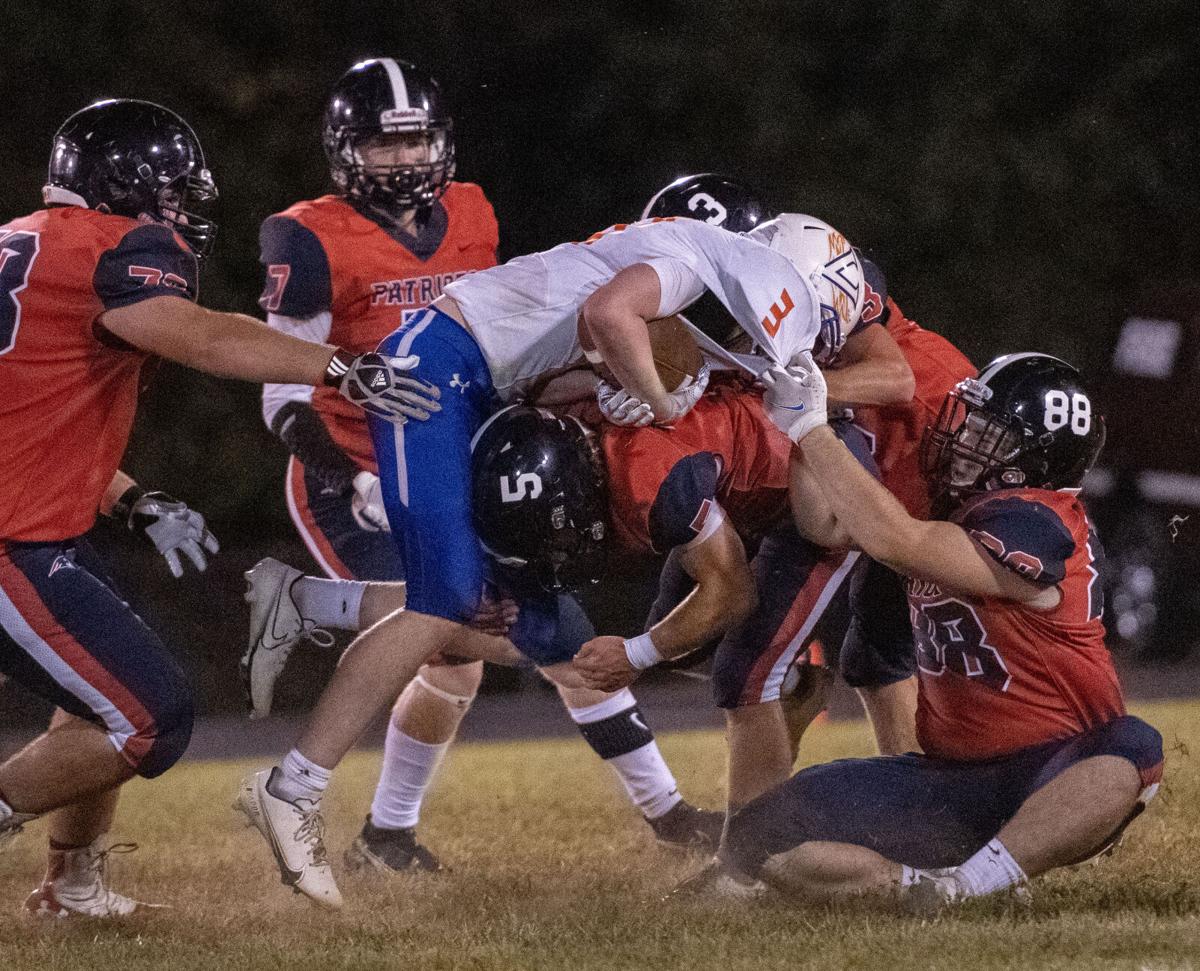 BRISTOL Tenn. – According to Volunteer senior Cameron Johnson, there’s nothing special about his running style.

“I just get the ball, look for the hole and go,” Johnson said.

That strategy resulted in a career-best 239-yard rushing effort Friday as the Volunteer Falcons rolled past the Sullivan East Patriots 55-13.

Most of Johnson’s damage came on sudden cutbacks, where he used his vision, quick feet and strong legs to navigate around defenders.

“That’s what we practiced all week,” Johnson said. “Our offensive line coach (Connor Trent) told me to look for the cutback. I listened to him and it worked out.”

The buck sweep was the signature play for Johnson.

“We ran it several times and executed it well,” Johnson said.

The highlights for East included the booming punts of senior Clayton Ivester and the courage of first-year senior quarterback Ethan Bradford. Facing a heavy rush, Bradford passed for 184 yards and three scores.

But the Patriots (1-2) were held to just two yards rushing and made four turnovers.

“We had bright spots, but you don’t see those just by looking at the scoreboard,” Sullivan East coach J.C. Simmons said. “The bottom line is that we have to come together as a family. We talk a lot about being a family, and families don’t splint apart. They come together in tough times.”

Juniors Luke Hare and Hunter Brown caught the touchdown passes for Sullivan East, but Brown was forced out of the game late in the first quarter with a knee injury.

The other hero for Volunteer was quarterback Garrison Barrett, a tall junior who completed his first nine passes for 93 yards.

“Cameron is crazy athletic,” Barrett said. “And those cutbacks are insane. He just puts his foot in the ground and goes.”

“I can’t say enough about Cameron,” McMillan said. “He made great runs and he didn’t get touched much, so we were blocking pretty good. Even though we only scored six points in our first two games, I’ve been telling the players that we were close. And it hit tonight.”

Simmons was impressed by the work of Johnson.

“Volunteer was hungry, and we knew that going in,” Simmons said. “And my goodness, (Johnson) was tough. I don’t think he’s stopped moving his feet yet. We were there to make for some plays, and we didn’t make them. “Volunteer executed and stuck it to us.”

The Falcons opened the season with two losses.

“We had a rough first two weeks, but all worked hard in practice and showed what we are made of tonight,” Johnson said.

Volunteer's Heath Miller gets tangled up with Sullivan East's eth Chafin on Friday.

Sullivan #68 Nick Sakellar dislocates his finger on a play during game against Volunteer.

Sullivan East #15 Hunter Brown tries to hold back Volunteer #88 Caleb Scott but the touchdown was good.

Sullivan East #9 Luke Hare scores as Volunteer #22 Colby Lawson is too late to stop the score during the first quarter.