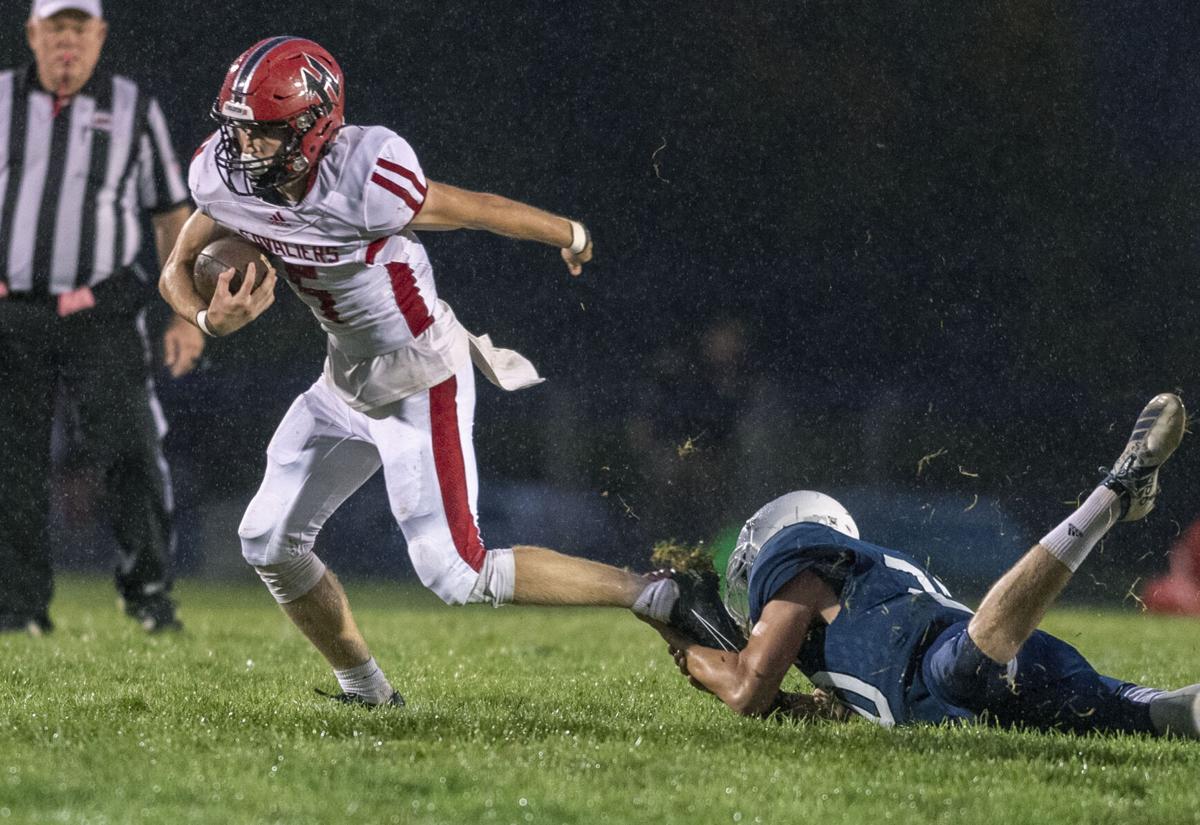 Patrick Henry's Cody Pruitt trips up Holston's Gage Quina in the backfield for a loss. 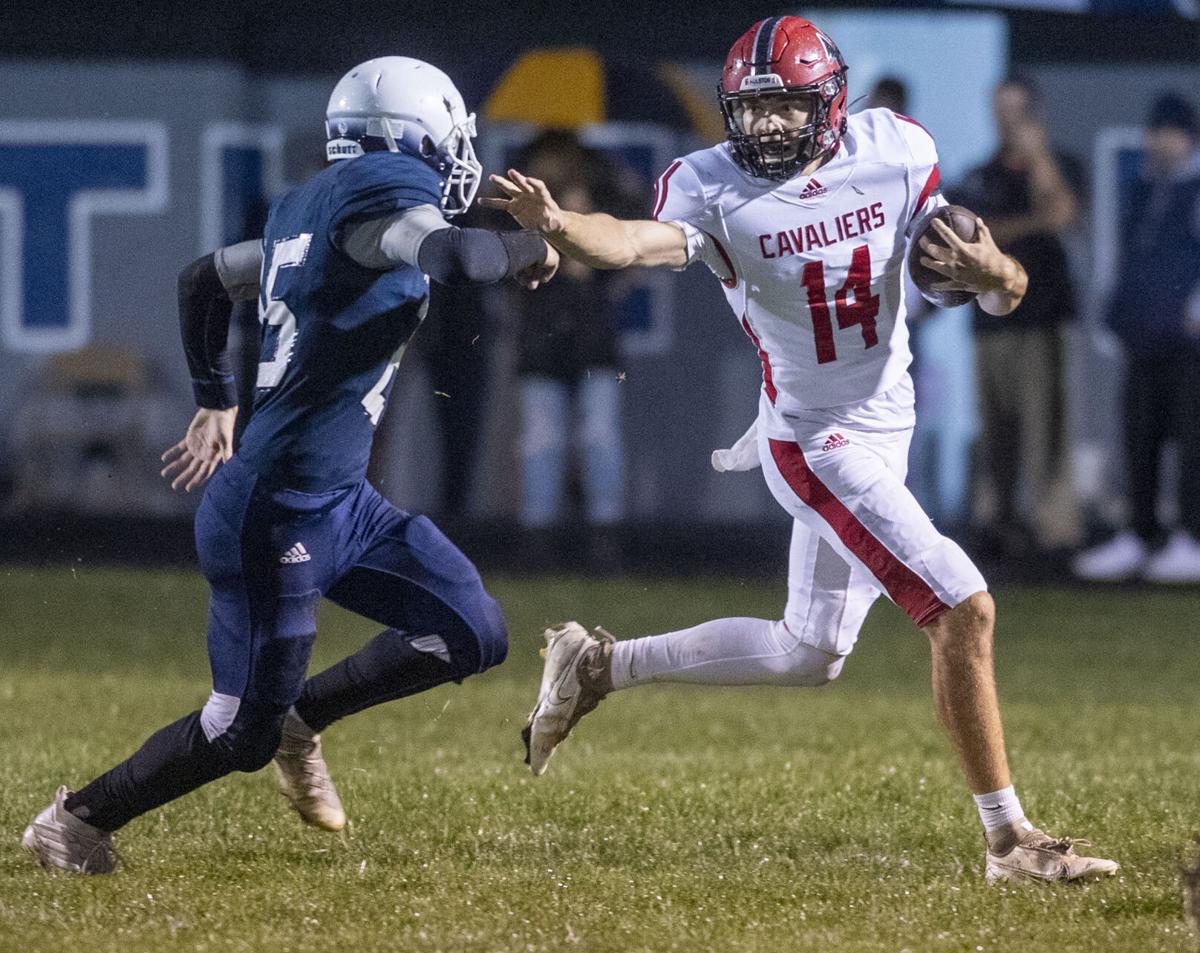 Holston's Brycen Sheets tries to avoid the tackle by Patrick Henry's Bobby Cline during last week's 19-7 win over the Rebels. Sheets accounted for four touchdowns in the Cavaliers' 44-0 rout of Northwood on Thursday. 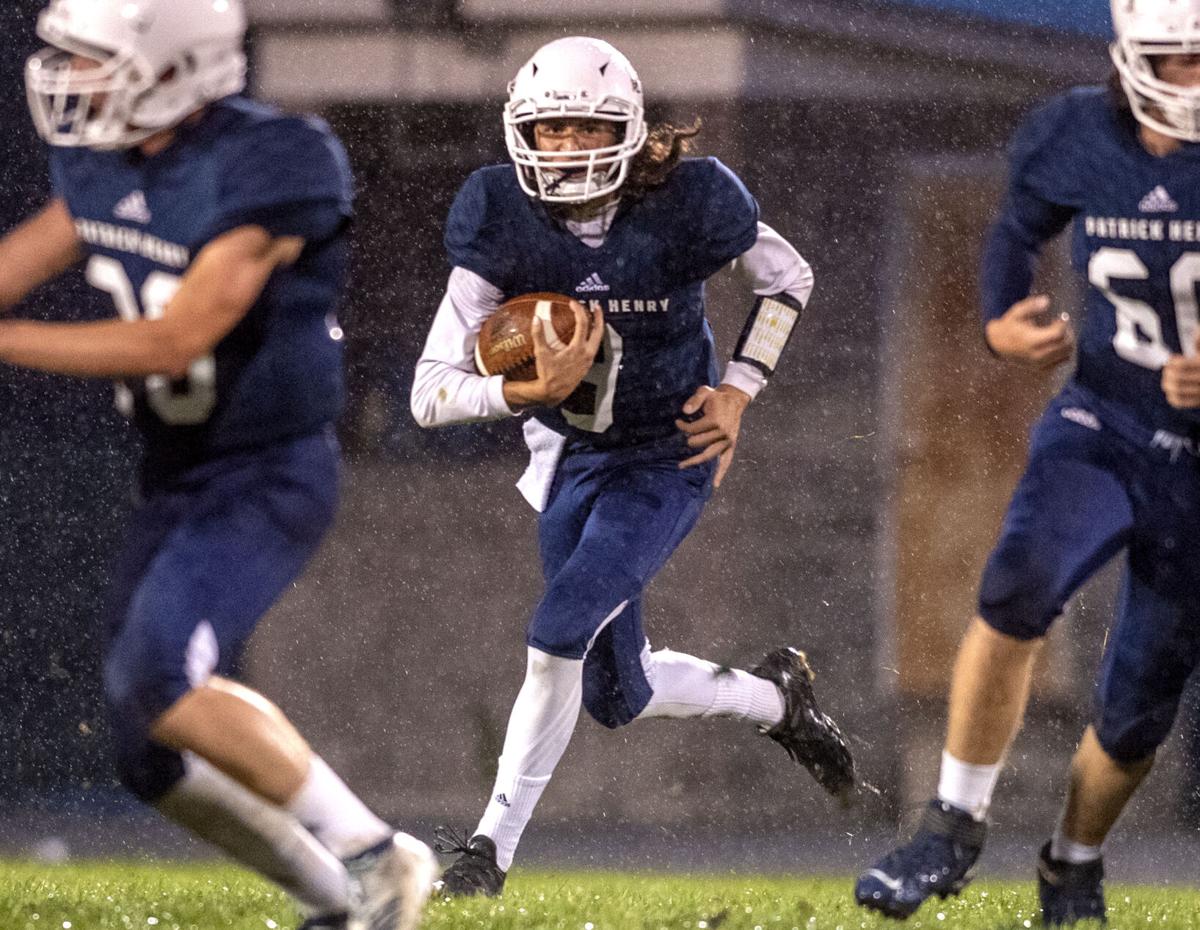 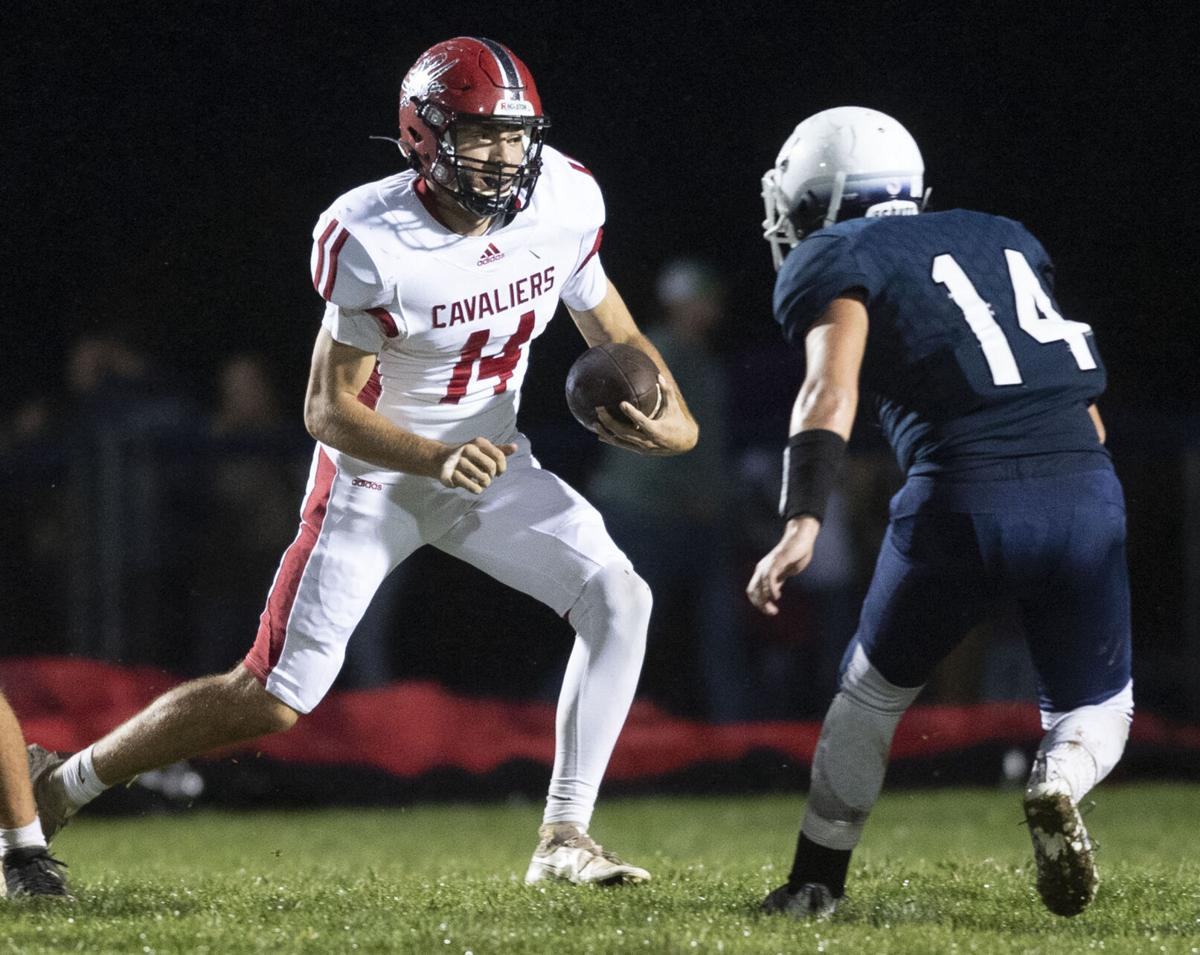 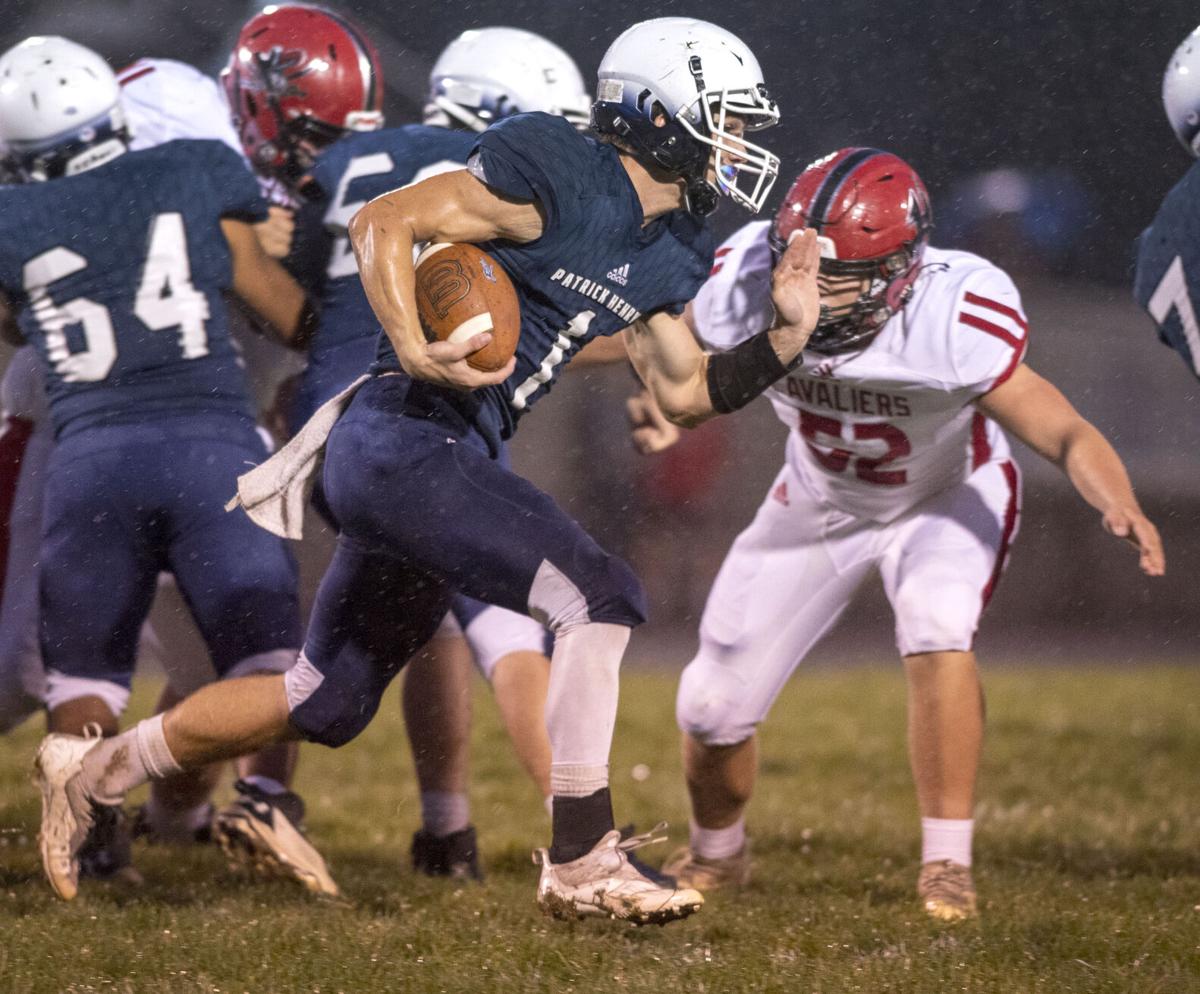 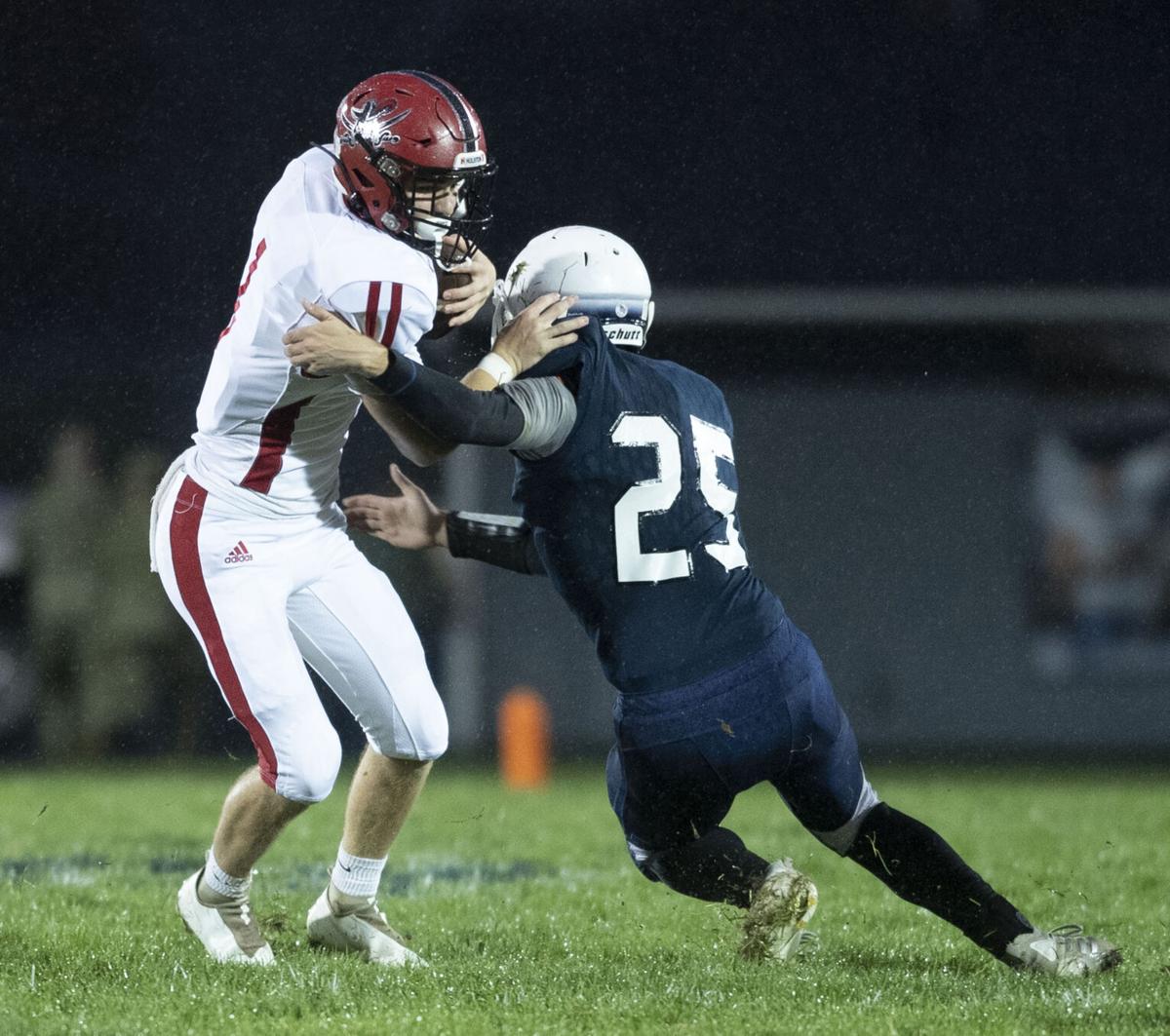 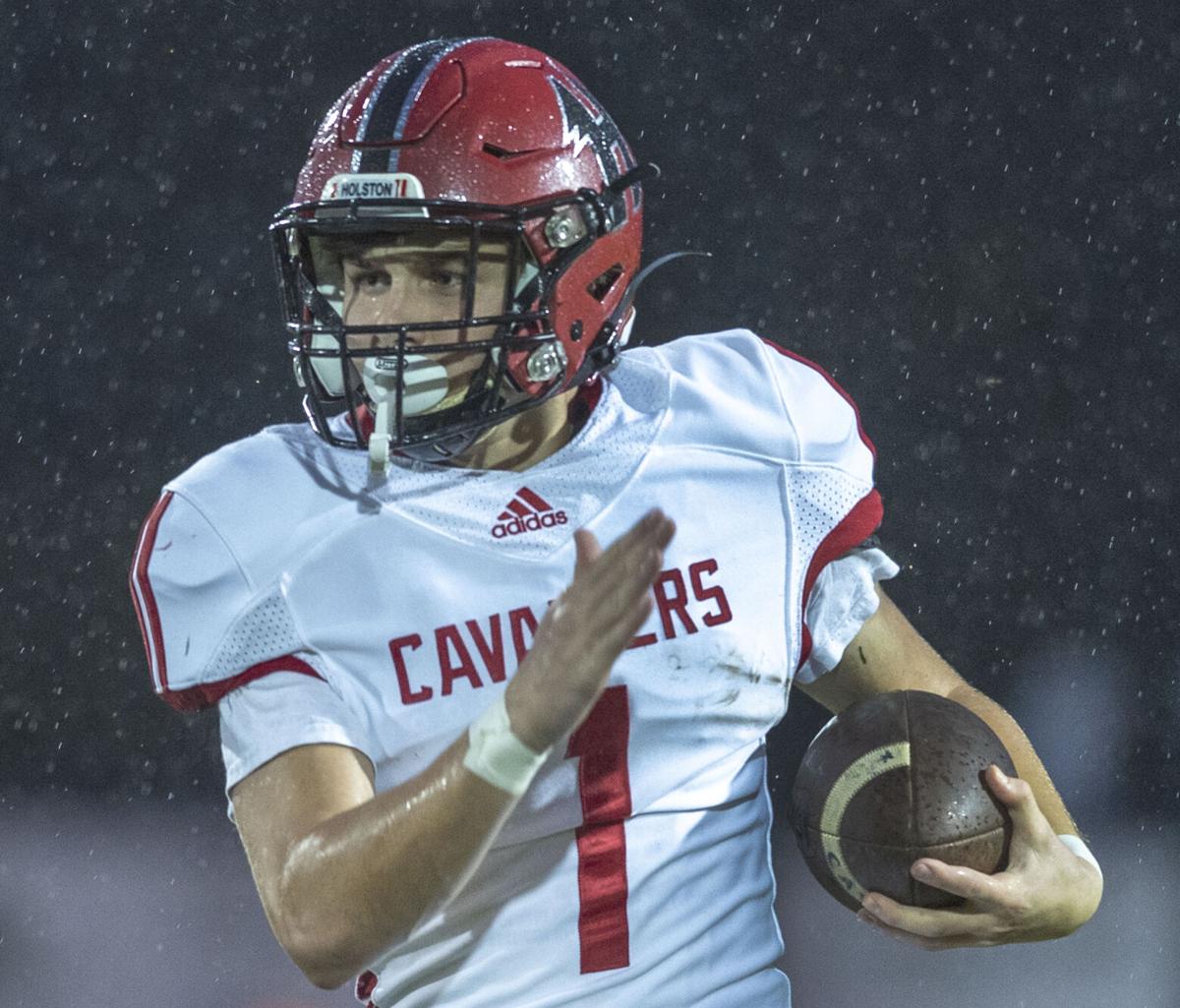 Holston's Trent Johnson gets to the corner against the Patrick Henry defense. 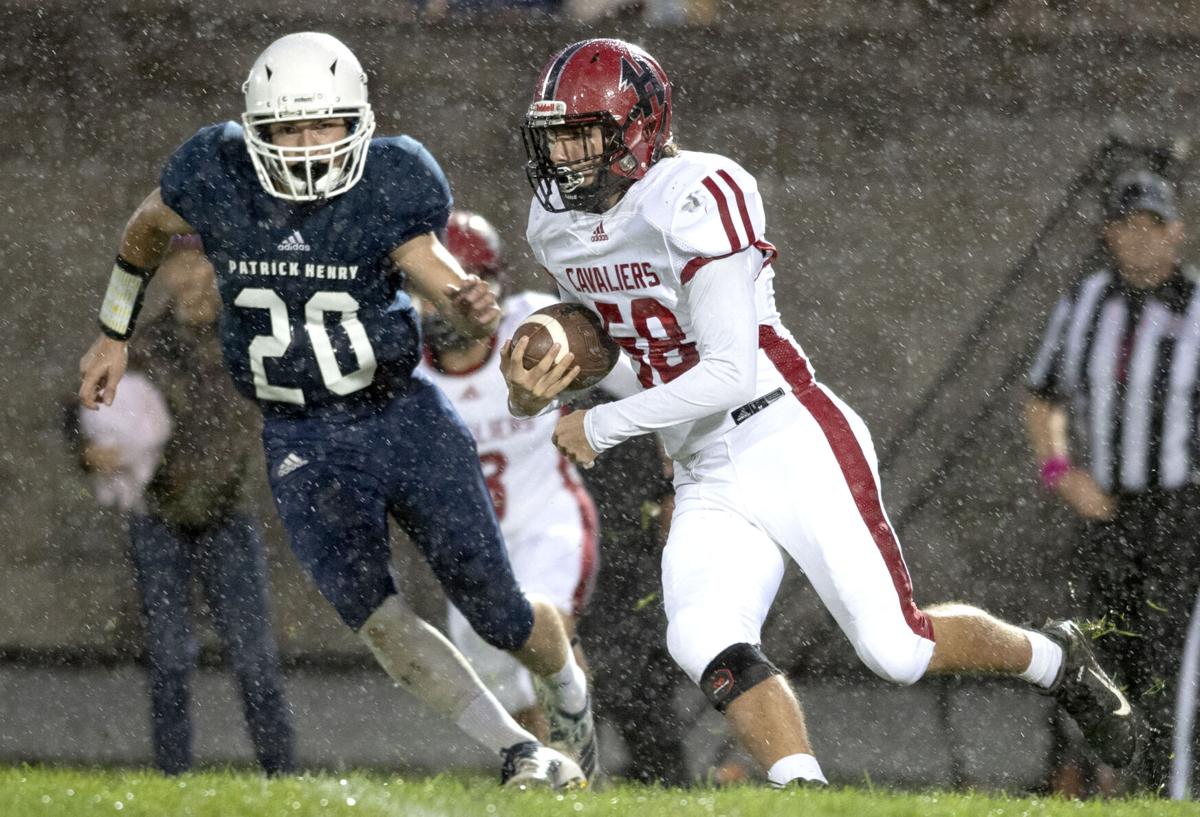 Holston's Caleb Casey is hit by Patrick Henry's Cody Pruitt on a kick off return.

EMORY, Va. - Jordan Ezell likes to live on the edge.

The Holston senior running back ran for three touchdowns to lead the Cavaliers to a 6-0 start to the season with a 19-7 Hogoheegee District win on a rainy homecoming Friday night at Patrick Henry.

“Six-and-0 for the first time since ‘09. That is amazing to be part of history and be 6-0 and we hope to keep it forever,” Ezell said. “We were hyped coming into this game, but we were also nervous because we haven’t played in the rain all year. We didn’t know what it would be like, but we came out on top.”

All 26 points in the game came in the second quarter, with Holston (6-0, 1-0) scoring the first 13 in a four-minute span. Ezell scored from 3 yards out after a Gabe Foster fumble recovery, and then a partially blocked punt that went just 14 yards led to 5-yard score from Ezell and a 13-0 lead for the Cavaliers.

“It was a little wet, but it was a pretty nice night to play actually,” Holston head coach Chris Akers said. “Our kids were just gutty all night and they played hard. We knew they were a good football team and they have been averaging a bunch of yards per game and a bunch of points and they are good. We had to be on top of our game tonight.”

Patrick Henry (4-2, 2-1) struggled to move the ball most of the night, but the Rebels followed those two touchdowns with a 2-yard run by Cody Pruitt, narrowing the deficit to 13-7, a play set up when J-Kwon McFail chased Holston quarterback Brycen Sheets back to the 2 and recovered his fumble.

“We made some mistakes ourselves. We had the fumble down there that almost broke our back, but that is part of the game,” Akers said. “With these wet conditions like this we knew it was going to be whoever made the big plays.”

That was it for the Rebels, who were held to just 107 yards, and 45 of those came on the final drive that ended with an interception by Trent Johnson. The talented duo of Cody Beeson and McFail were held to less than 50 yards by the Lane Blevins-led defense.

“This was fun, but the rain actually helped us with them having bad snaps and turnovers so that momentum on defense helped our offense,” Ezell said. “They have good running backs, but if they can’t get the snap back to them, they can’t do nothing.

“If it wasn’t raining it might have been a different ball game, but we come out on top. We will probably see them again.”

Holston answered that score with one of their own, keyed by Johnson dashing 40 yards deep into Patrick Henry territory. Ezell scored three plays later from nine yards for the final points of the game.

“They were letting me get to the edge and when I get to the edge I can make one person miss,” Ezell said. “All of our running backs can make someone miss so if we get to the edge that is when we are more lethal. When Trent gets on the edge, he is fast, he is one of the fastest in the region so he is hard to catch.”

Johnson finished with 104 yards, while Ezell had 53 and Gage Quina added 50 for the Cavaliers, who dominated on the line of scrimmage. The Cavaliers completed just one pass for six yards.

“This was a good old-fashioned butt-kicking tonight. We could just never gain any kind of momentum, which we had in all our past five games where we could put something together,” Patrick Henry head coach Seth Padgett said. “I give them credit. We got out-coached, we got out-played tonight and this is on me tonight. We will get better for this and we will bounce back from this.”

Holston forced three turnovers, including an interception by Landon Sanders. Pruitt joined McFail with a fumble recovery for the Rebels. Neither team scored in the second half, as the rain continued to soak the field.

“Beeson and McFail are good football players,” Akers said. “They are still going to get their yards. I thought we had a good game plan coming in and our kids executed to the best of our ability. It was a good hard fought football game on both sides.”

Akers has yet to lose as Holston coach, having replaced Derrick Patterson prior to this season.

“I am happy with this football team,” Akers said. “They are a good group to work with, they work hard and they deserve everything they are getting right now.”

NFL Week 6 Market: Will weather be a factor?

The former Gate City High School star drained a 3-pointer with 3:45 remaining. The rookie guard went 1-for-3 from the field, corralled a rebound and did not commit a turnover.

Abingdon and Lee High were the football winners on Tuesday.

The Abingdon Falcons are favored to retain their status as a state power, while Castlewood hopes to complete its climb to the top.

Patrick Henry's Cody Pruitt trips up Holston's Gage Quina in the backfield for a loss.

Holston's Brycen Sheets tries to avoid the tackle by Patrick Henry's Bobby Cline during last week's 19-7 win over the Rebels. Sheets accounted for four touchdowns in the Cavaliers' 44-0 rout of Northwood on Thursday.

Holston's Trent Johnson gets to the corner against the Patrick Henry defense.

Holston's Caleb Casey is hit by Patrick Henry's Cody Pruitt on a kick off return.