In honor of Independence Day, Bristol Herald Courier - Tricities is providing unlimited access to all of our content from June 28th-July 4th! Presented by The Vein Company 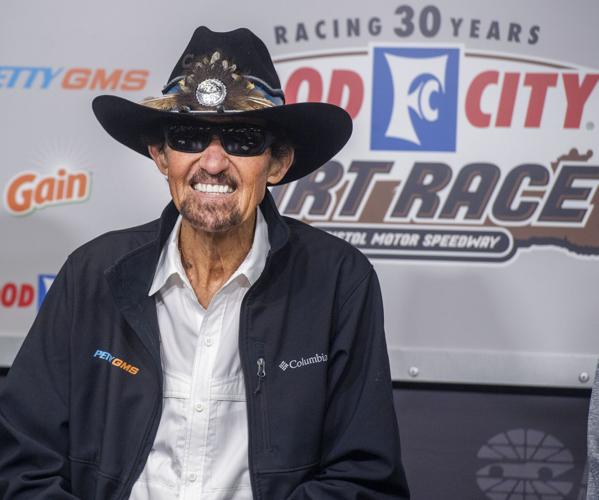 NASCAR Hall of Famer Richard Petty visited Bristol Motor Speedway on Tuesday to promote the upcoming Food City Dirt Race in April and to announce sponsorships for his two cars. 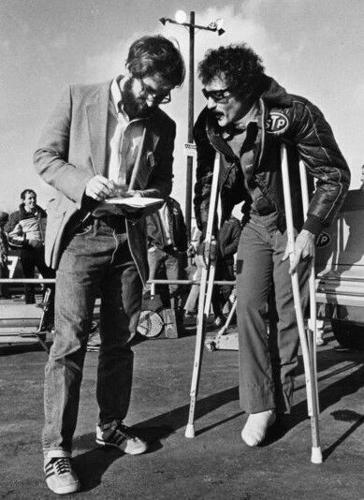 BRISTOL, Tenn. – Richard Petty was not exactly enthused over the bold experiment with dirt last year at Bristol Motor Speedway.

But in a Tuesday morning press conference at BMS, the seven-time NASCAR Cup champion and longtime team owner explained that he’s more receptive to the move.

“You look at where NASCAR is today, and I wonder if we’re messing up here by going back over time. But once you really think about it, this is our history. If it hadn’t been for the dirt tracks and dirt racing, there wouldn’t have been any other tracks or NASCAR,” Petty said.

The Petty GMS Racing team will have a big presence for the April 17 Food City Dirt Race thanks to a partnership with Food City, Gain, and Tide.

The No. 42 Petty GMS Motorsports Chevrolet driven by Ty Dillon will carry the Gain brand, while the No. 43 Chevrolet for Erik Jones will showcase the Tide brand.

Jones, who recorded a ninth place finish in last year’s Food City Dirt Race, said the addition of Dillon as a teammate has been beneficial in several ways.

“I look at it as having more information and data,” Jones said “We have more things now to try through the weekend and work on.

“I learned a lot last year, but it was a different route than what I had taken. Having two cars is a good route to go in the Cup Series.”

Based partly off feedback from teams, BMS and NASCAR officials have made alterations to the track configuration to give drivers more options during the April 17 event. The new start time will be 7 p.m.

“They talked to some of the guys in the Cup garage who have dirt experience to get their options on what we needed to do to make the track a little wider,” Jones said

No matter the changes, Jones said the complexity remains high.

“It is a dirt surface, but it’s still Bristol,” Jones said. “The way you approach and drive the track is similar. There is just a lot less grip than what we have at other tracks.”

Dillon finished in the No. 26 spot last year on the BMS dirt for the underfunded Gaunt Brothers Racing team.

So far this season, drivers with dirt racing experience have flourished on the Cup Series. That’s a good sign for Dillon, who grew up competing on dirt tracks such as Wythe Raceway in Rural Retreat, Virginia, and Volunteer Speedway in Bulls Gap, Tennessee.

“I probably ran over 50 times at both of those tracks,” Dillon said. “Wythe has the long straightaways and Volunteer has the high banks like here. I would call them my two home dirt tracks.”

As for year two with operation dirt at BMS dirt, Dillon is optimistic.

“They’ve changed the banking of the track a little bit, so that should make things racier,” Dillon said. “At the beginning of last year’s race, drivers were able to move around and get to the top and use it. But I just don’t think the track was ready for that yet, so cars ended up at the bottom.

“A lot of work has gone into making sure there are multiple grooves for this race.”

Through five events this season, parity has been the byword as five different drivers have won.

“The new [Next Gen] car is providing a lot of that,” Jones said. “Some teams are figuring things out, while other teams are still getting used to it.”

Jones has been a fast learner to the highly-hyped Next Gen ride.

“I’m enjoying things,” Jones said. “The car has been fun to drive and the racing has been good. It’s a new challenge, for sure, but the season has been going in a really good direction overall.”

According to Petty, the rare Easter Sunday race date for the Food City Dirt Race has the potential for a hit with spectators and television viewers.

“From a spectator standpoint, Bristol is probably the best track that we go to. A lot of fans will look forward to coming out because it’s going to be a night race,” Petty said. “With the TV audience, so many people will be home and watching with their families.

“From that standpoint, I think it’s going to be a big plus for Bristol Motor Speedway and for NASCAR.”

As for placing dirt around one of the most iconic tracks in motorsports, Petty is more accepting.

“Going back from time to time and letting the fans and drivers realize where NASCAR really came from, I’m beginning to be a bigger fan of that,” Petty said.

Food City will be a sponsor on the Petty GMS rides.

“We always look forward to coming to Bristol,” Petty said. “The dirt makes it interesting, sort of like we’re running road courses.”

For the next two weeks, BMS will host the second annual Karl Kustoms Bristol Dirt Nationals.

The colorful event features 11 different classes, with a $1 million purse.

Grandstands will be open during both weekends for the XR Super Series Late Models, featuring some of the top dirt drivers in the country.

A $50,000-to-win race for the XR Super Series Late Models will close out each night of racing during the two weekends. The driver who has the best series of finishes over the four-race stretch will pocket an additional $100,000 bonus.

Heat races for the support divisions were held at BMS Tuesday night.

The Virginia High School League released its master football schedule on Wednesday and like a menu at a fine dining establishment, folks throughout the Commonwealth craving some pigskin have scanned it thoroughly.

Jacob Underwood has always loved the game of basketball and it was during his senior year at Rural Retreat High School in 2016 that he realized teaching the sport might be his career path.

Wytheville's Mabe feels blessed to be back on the mound

When Avery Mabe stood on the mound at historic Calfee Park during his Appalachian League debut for the Pulaski River Turtles on June 10, the r…

NHRA Pro Stock racer Aaron Stanfield called it the craziest final round of his career.

State Liners' 'Mo' Hampton has the major leagues as a goal

The Appalachian League season was already a couple of weeks old when Maurice “Mo” Hampton Jr. joined the Bristol State Liners and it didn’t take long for the team’s skipper to realize there was something special about the newly-arrived center fielder.

WATCH NOW: A blast in Bristol: Thunder Valley continues to be the mecca for drag racing in America

By every standard, the NHRA Thunder Valley Nationals at Bristol Dragway was a blast.

US coach makes dramatic rescue of artistic swimmer at worlds

Andrea Fuentes prevented a tragedy at the swimming world championships with her quick reaction.

The new model will feature a 3-5-5 structure starting in the 2023 season with each team in the conference getting three primary opponents annually and face the other 10 league teams twice during the four-year cycle (once at home and once on the road).

U.S. swimmer rescued by coach after fainting at world championships

U.S. swimmer rescued by coach after fainting at world championships

NASCAR Hall of Famer Richard Petty visited Bristol Motor Speedway on Tuesday to promote the upcoming Food City Dirt Race in April and to announce sponsorships for his two cars.