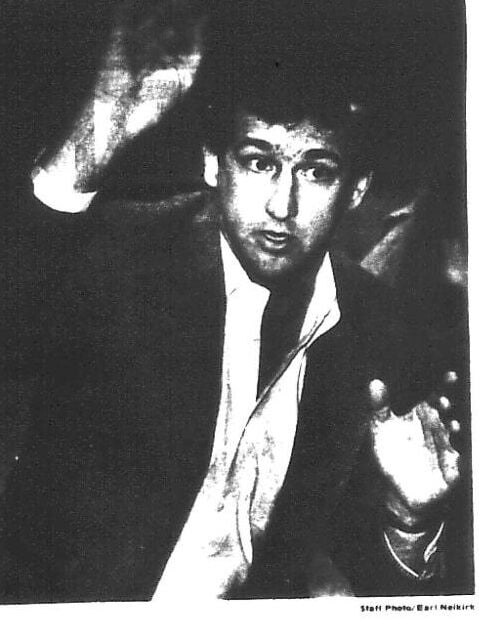 Paul Westphal appears on the front page of the Bristol Herald Courier sports section in 1986.

It was two years after he had played his final game in the National Basketball Association and seven years prior to the season in which he coached the Phoenix Suns to the NBA Finals.

Paul Westphal was a 35-year-old rookie head coach in March of 1986 and was the big name in an event known as the National Little College Athletic Association men’s basketball tournament held at Bristol’s Viking Hall.

He was guiding the Southwestern Bible College Eagles from Phoenix, Arizona, an unheralded group of guys whose spot in a national tournament of any kind was unlikely. As Bristol Herald Courier sports editor Steve Bawden wrote of the team: “Featuring a 6-foot-2 center and YMCA uniforms, the Eagles aren’t impressive at first glance.”

The team did not have a home gym to call its own, had gone just 3-20 the year before and the roster wasn’t exactly full of five-star recruits.

“I still remember how excited our players were to get the opportunity to travel to Bristol,” said Keith Province, who was Southwestern’s assistant coach. “We had just won our conference championship in a dramatic finish with a player, Tim Fultz, who was more like the team manager, making a free throw to seal the victory. He was carried off the court on the shoulders of his teammates. The guys really enjoyed playing for Coach Westphal and being together, so extending the season was truly special for all of us.”

Westphal died on Saturday at the age of 70 and many tributes have been written about a man who carved out a Hall of Fame playing career while suiting up for the Suns, Boston Celtics, Seattle SuperSonics and New York Knicks. He was a winning coach and a respected gentleman within the game as well.

Yet, most of those tributes from national media outlets didn’t touch on that 1985-86 season when he led the school now known as Arizona Christian University to a memorable season that resembled a Disney movie script.

You know about his stint coaching Charles Barkley, Dan Majerle and Kevin Johnson in the Arizona desert, but probably don’t remember that squad led by Danny Coyle, Dan DeRuiter and Dave Narloch.

“I’ve enjoyed this year as much as any I’ve spent in basketball,” Westphal told Bawden. “It’s a privilege to coach them. It’s easier to be a Division I player than it is for some of these guys to play at this school. I’ve got two players who are married, have kids and have jobs. They work from midnight to 6 a.m., go to school, attend practice, then go home and get three or four hours of sleep. They’re so dedicated. It’s hard for some Division I players just to show up for practice on time.”

“After arriving at Bristol, I remember during our initial practice, Paul told each player about their specific role in the upcoming game,” Province said. “He spoke encouraging words like, ‘After Walt [Rock] sets the screen, Dave [Narloch], you’ll go around the baseline and hit the shot in this area.’ And ‘Danny [Coyle], when their point guard goes left, you’re going to come from behind and steal it for a layup.’ Immediately, I could see the confidence building in our players. And just like we practiced and Paul predicted, soon after the game started, Danny stole the ball and made a layup.”

After a 74-72 win over Cardinal Stritch of Wisconsin in the opening round, the team suffered a 92-80 loss to the host Bristol College Bulldogs in the quarterfinals. Bristol eventually won the tournament with MVP Derek McGlothlin leading the way as the Bulldogs were coached by former Science Hill High School and Milligan College player Brien Crowder.

Crowder had been such an admirer of Westphal growing up that he wore No. 44 during his playing days, the same digits as one of his favorite players.

“What great memories of Paul,” Crowder said. “Not many people get to be acquainted with an idol of theirs. He was such a humble man. He got a technical late in our game by throwing down a water bottle and it hit a chair and rolled onto the floor. Ironically, two years ago in my last coaching season [at a high school in Florida], it happened to me in a Christmas tournament. Both of us weren’t trying to get T’ed up. It just happened.”

Crowder would actually stay in touch with Westphal after they coached against one another.

“He made a couple of recommendation calls for me to get coaching jobs,” Crowder said.

“It was quite a thrill to meet him and interview him, because I actually had watched the 1976 triple-overtime game against the Celtics on TV – Game 5 of the NBA Finals,” Gilmore said. “It’s been called the greatest game and as a 13-year-old kid I watched him play magnificently [for Phoenix] in the series.

“For the games I covered, he was passionate and encouraging to his players. I heard that he was coaching gratis, but I saw no difference in the way he coached them than the way he coached a few years later when he was NBA coach of the year. That speaks to his integrity.”

A moment that occurred after Southwestern saw its season end with a 78-76 loss to Central Christian College of McPherson, Kansas, in the consolation round has stuck with Gilmore all these years later.

“There is an unwritten rule for sports writers not to enter a closed locker room,” Gilmore said. “But I was running close to deadline and I peeked in. [Westphal] was praying for his team and weeping with them. I was deeply moved by his level of humility.

“Seeing athletes and coaches on television and even in person, you sometimes forget about their humanity, but that glimpse in the locker room helped me understand that even a Hall of Famer understands relationships and service to others in truly meaningful ways. For him, it seemed that the game was for the players, not for him. What a legacy he has left for those who knew him well and for those of us who had a small interaction with him.”

Southwestern finished 21-9 under Westphal’s tutelage and that would be his lone season at the tiny institution. He won the 1988 NAIA national title at Grand Canyon College and his coaching journey included many more stops on the college and pro levels before it was all said and done.

Yet, that initial season on the bench for Westphal culminated in a trip to Bristol.

“Paul Westphal had a higher calling in life and he demonstrated his faith through love, humor and competiveness,” Province said. “And I’m so thankful for the honor and privilege to sit next to him on the bench for a special season.”

Holston’s Derrick Patterson and Graham’s Tony Palmer have directed their teams to top seeds in their respective regions. They also happen to be the only two Black high school football head coaches in far Southwest Virginia.

PREP VOLLEYBALL: Virginia High's Camden Jones versatile on the court for the Bearcats

“When you’re in the air and you get a good set and you’re about to crush it – it’s honestly the best feeling,” Jones said. “After you hit it and your team is there with you to celebrate, it’s pretty awesome.”

Paul Westphal appears on the front page of the Bristol Herald Courier sports section in 1986.