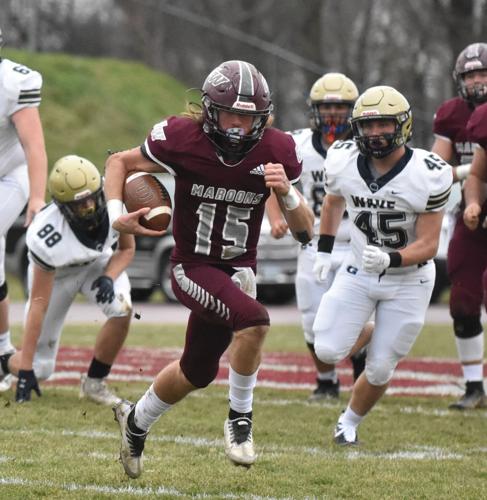 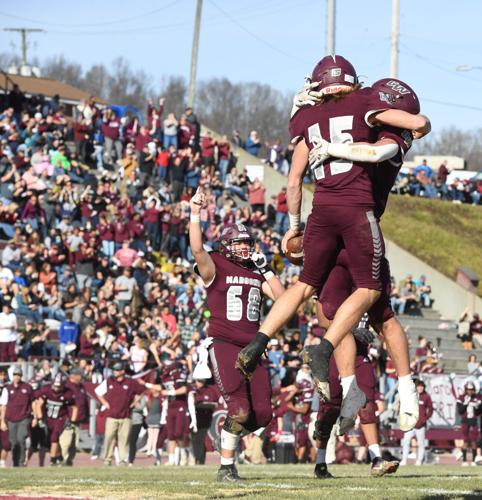 George Wythe’s Tandom Smith (15) celebrates his 19-yard touchdown run with Luke Jollay in the second quarter of the Maroons’ Region 1C championship win over Grayson County. Smith replaced the injured Jollay at quarterback during the third game of the season.

On the first offensive possession of the third game of the season for the George Wythe Maroons, an incident occurred that threatened to alter the trajectory of a promising campaign.

Luke Jollay took a hit from a Giles defender on a 2-yard touchdown run with 8:08 remaining in the first quarter on Sept. 9 in Pearisburg and the diagnosis for the steady senior signal-caller was a broken collarbone.

“My heart dropped,” said GW coach Brandon Harner. “It really did. I was thinking that this could go really, really bad. No. 1, Luke was our quarterback, but he was also the quarterback of our defense.”

In search of a lift, it just so happened that Tandom Smith came to the rescue.

Like Tom Brady for Drew Bledsoe in 2001 or Kurt Warner for Trent Green in 1999, Smith stepped in seamlessly to take the snaps and kept the Maroons moving along.

His first offensive drive after shifting from wide receiver to QB in that Giles game resulted in a touchdown and the Maroons earned a key 35-7 win over their Mountain Empire District rivals.

Smith hasn’t slowed down since and is among the many reasons the Maroons (10-3) play the Riverheads Gladiators (11-1) at noon on Saturday in the VHSL Class 1 state football finals at Salem Stadium.

“Tandom is just fearless,” said George Wythe offensive coordinator Quinton Hensley. “He has that inner-confidence, which is so important, but at the same time he is a student of the game and is very coachable. He asks questions and is motivated to be great. He just does so many things well. Throws it well, runs hard with speed and runs our offense smoothly. We have a pretty complex offense where the QB has to make a lot of reads; a lot of option in our offense, as well as motions. I’m fortunate to be coaching him.”

Smith rushed for two scores – including a 48-yarder on GW’s second offensive play from scrimmage – and tossed TD passes to Laden Houston and Ben Jollay in a 35-12 state semifinal win over Grundy.

“I think I played exceptionally well,” Smith said. “It was one of my better games, but I’m expecting to better myself every week.”

Smith has a penchant for making game-changing plays and that was never more evident than in a 20-7 victory over Galax in October when Smith busted loose for a 99-yard touchdown run in the second quarter.

“A few plays before that No. 57 on Galax, Riley Jo Vaught, stuck me pretty good and bruised my ribs,” Smith said. “On that touchdown, I didn’t see anything … I didn’t believe it happened. I was very gassed after that.”

Smith has gotten more comfortable each week as his confidence has grown.

“I’ve improved in my QB skills, I believe,” Smith said. “The more I’ve played I’ve been able to read defenses much easier and my field vision has gotten better.”

When Luke Jollay returned from his collarbone injury, there was no quarterback controversy as Harner decided to stick with Smith.

“What Luke Jollay has done since then I believe is why we are the team we are and why we are playing where we are playing now,” Harner said. “It was one of the hardest decisions I’ve had to make as a coach. Luke is the kid you want to lead your team and he does everything right. When we had that conversation he just looked at me and said, ‘Coach, I will do anything I can to help us win. I just want to win.’ To me that’s the bigger story. Tandom deserves all the credit and accolades, but how Luke handled that is unlike many adults would handle that. He’s one of a kind is all I can say.”

Speaking of one of a kind, Tandom Smith has a unique first name.

“My dad [Christian Smith] thought of it out of the blue, while my mom [Shelly Smith] was pregnant with me and they loved it,” Smith said.

Backup quarterbacks thrust in starting roles have shined before in the state spotlight for far Southwest Virginia teams.

When George Wythe won it all in 2012, Jordan Byrd replaced an injured Alex Willis at the position due to an injury to the incumbent.

In Clintwood’s run to the 2011 Group A, Division 1 championship, sophomore Dalton Dahley took over for his older brother, Dylan Dahley, under center after the latter broke his collarbone in a state quarterfinal win over – coincidentally enough – George Wythe.

The Jonesville Bulldogs made an unlikely run to the 1988 Group A, Division 1 championship with sophomore Brett Clark taking over the signal-calling duties in the playoffs in a shrewd strategic move by coach John Cooke that paid off in a major way.

Smith has the support of Luke Jollay entering Saturday as George Wythe has QB harmony instead of a QB quandary. Luke Jollay has lined up at wide receiver, tight end and held down his safety spot since returning.

“Me and Luke’s relationship is great,” Smith said. “He’s a really good friend of mine and he’s helped me a lot playing quarterback.”

Smith hopes to experience the ultimate achievement on Saturday when the Maroons face a Riverheads team that is aiming for a seventh consecutive state championship.

“The emotions are going to be insane and everyone’s going to be hyped up,” Smith said. “Ever since pee-wee football we’ve dreamt about this moment.”

Chilhowie didn’t win the Hogoheegee District boys basketball title on Friday night, but they certainly took a big step in that direction.

There’s a tie atop the Cumberland District boys basketball standings and those old familiar foes are sharing first place at the moment.

LOCALS IN COLLEGE NOTES: Lomax to run next for UVa-Wise

Zavier Lomax is ready to run for the Highland Cavaliers of the University of Virginia’s College at Wise.The former Union High School standout …

George Wythe’s Tandom Smith (15) celebrates his 19-yard touchdown run with Luke Jollay in the second quarter of the Maroons’ Region 1C championship win over Grayson County. Smith replaced the injured Jollay at quarterback during the third game of the season.