Sullivan East’s Mia Hoback, left, and Hayley Grubb attempt to return a shot during the Patriots’ three-set win over Grainger in the Region 1-AA semifinals on Tuesday night at the Dyer Dome. Sullivan East also swept Tennessee High in the nightcap to claim the Region 1-AA championship, and will host Knox Gibbs in a sectional match Thursday. 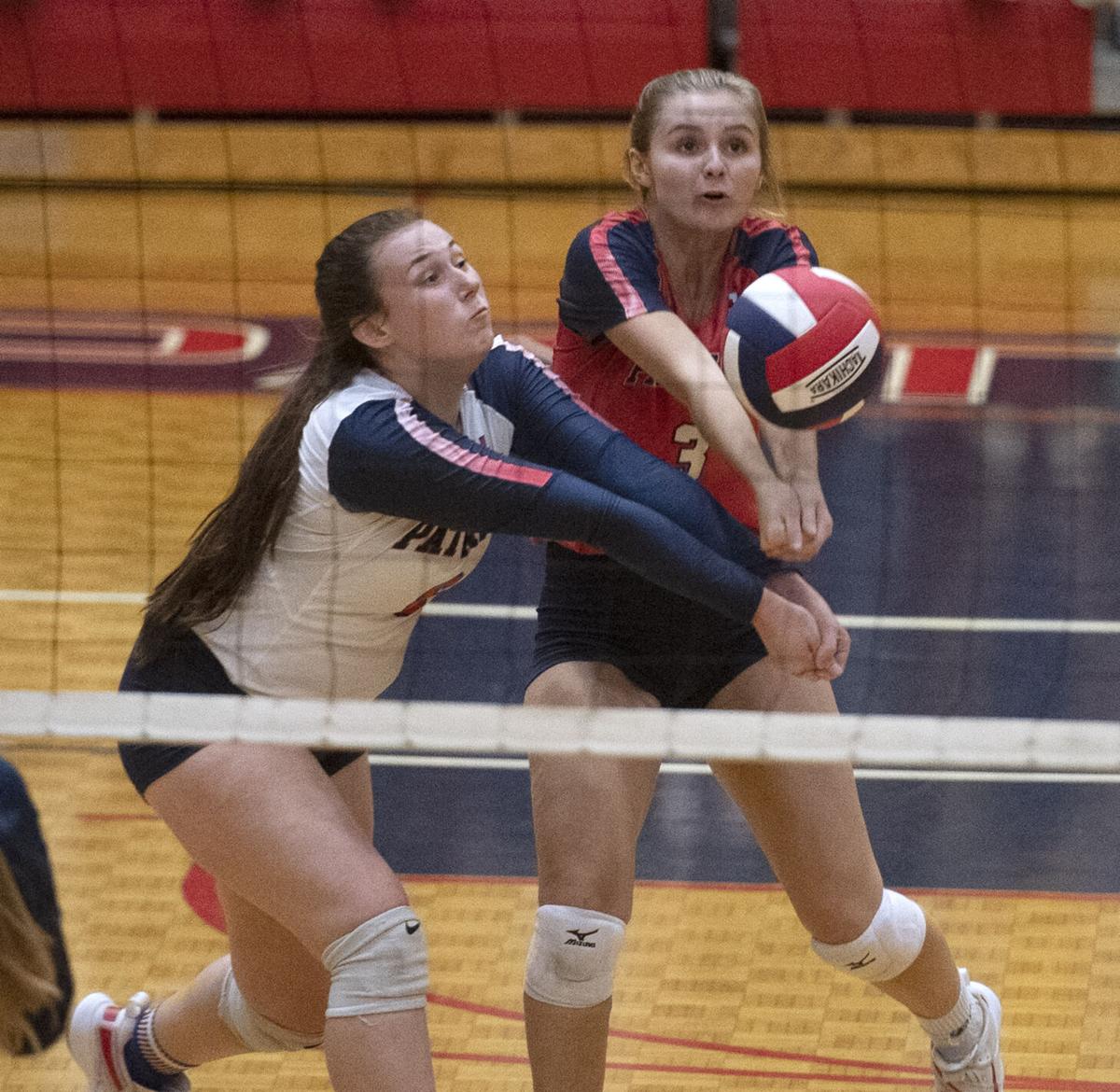 East senior Riley Nelson was the queen of the court as she ruled to the tune of 12 digs, 11 kills, six blocks and two aces in a 25-22, 25-16, 25-22 trumping of Tennessee High in the finals of the TSSAA Region 1-AA volleyball tournament.

Nelson collected a dozen kills in a 25-5, 25-17, 25-20 semifinal win over Grainger earlier on Thursday and was a no-doubter when it came time to choose tournament MVP honors, as she added that hardware to the District 1-AA tourney MVP and Three Rivers Conference hitter of the year accolades she had grabbed last week.

Her performance helped East (19-8) win its first regional championship since 2000 and the opportunity to host Gibbs on Thursday at 7 p.m. in the sub-state round of the Class AA tournament. Meanwhile Tennessee High (28-9) travels to traditional power Anderson County on Thursday.

“We haven’t gotten to host a sub-state match at home in a long time, so that’s very exciting,” Nelson said. “Tonight was awesome. The key for us was just doing the fundamentals, keeping our energy up and communication.”

East has been coming in loud and clear as the Patriots have won the last 10 sets they’ve played. This is a crew that has taken their game to a new level in the postseason.

“We really don’t have a weak link,” said East’s Hannah Hodge, who had 12 digs, seven kills and three aces in the triumph over THS. “If somebody has a down night, we have somebody else right there picking them up. We have a good mentality right now.”

The Patriots also have plenty of stamina as they played their semifinal and final matches consecutively on Tuesday.

“I like playing back-to-back,” said Sullivan East coach Tracy Graybeal. “We set the schedule as the host and sometimes when you play and then sit, you get cold. They’re worn out right now, but we took care of business and at the end of the day that’s what matters.”

“It’s like a machine and every person has to go to make that machine work,” Graybeal said. “That’s from the pass to the set to the swing.”

Tennessee High clinched its eighth sub-state berth in program history with a 25-17, 25-16, 25-20 victory over Greeneville in the semifinals, but the Vikings couldn’t solve Sullivan East in the title match.

The Vikings did cut what were once deficits of 18-9 and 19-11 to two points late in the third set, but the Patriots powered through and fittingly Nelson had the match-clinching kill.

“They have five seniors that lead their team,” said THS coach Mary C. Johnson. “We’re young and this group has never been in postseason play before. It’s one of those things where it’s a disadvantage not having a bunch of seniors and never being here.”

“East is a great team,” Johnson said. “What do you say? We’re happy to be playing Thursday and we have a chance to go to the state tournament and that was our goal. I don’t care if we play at home or we play in Knoxville.”

While Tennessee High hits the road, the squad from Bluff City will be at home and the Patriots will try to keep playing their best volleyball at the most important time of the season.

“That group of kids right there,” Graybeal said. “As a coach, in my opinion, you try your best to sell your system, but at the end of the day when your kids buy in, that’s what wins games. They played remarkably well yet again.”

2021 Heisman Trophy Market: Where is the value?

Who should take over at LSU?

Who should take over at LSU?

Lamar Jackson has most wins of any QB under 25

Lamar Jackson has most wins of any QB under 25

Jim Riggs came of age during the Great Depression, played football in the years prior to World War II, coached his final game as a gridiron boss in 1972 and died nine years ago.

Holston plays host to Northwood in a Hogoheegee District football game tonight. The Cavaliers look to go 7-0, while the Panthers are looking to improve from 1-4. Who wins? Check out the prediction for Thursday night's affair.

Honaker can take a step closer to wrapping up the Black Diamond District title in Doug Hubbard’s 39th and final season as the head coach.

Sullivan East’s Mia Hoback, left, and Hayley Grubb attempt to return a shot during the Patriots’ three-set win over Grainger in the Region 1-AA semifinals on Tuesday night at the Dyer Dome. Sullivan East also swept Tennessee High in the nightcap to claim the Region 1-AA championship, and will host Knox Gibbs in a sectional match Thursday.