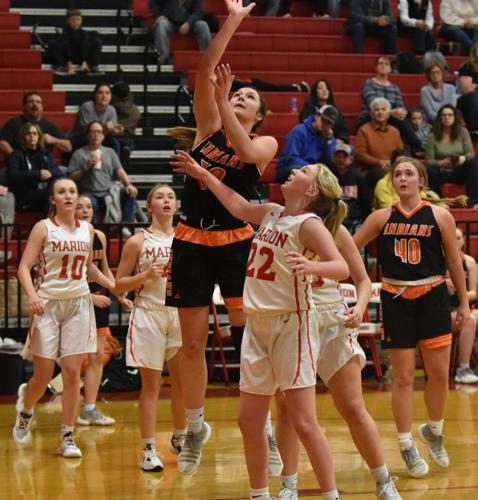 Rural Retreat senior Brelyn Moore has recorded 14 double-doubles in 17 games for the Indians, who are currently in first place in the Hogoheegee District. 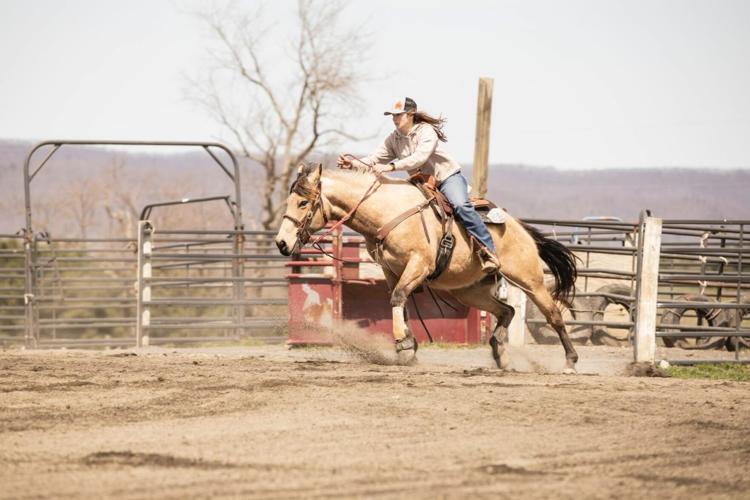 Rural Retreat senior Brelyn Moore isn't just a standout in basketball and volleyball for the Indians but is also a talented barrel racer with her quarter horse "Wish."

As an errant shot clangs off the rim and a sea of players crash the boards with reckless abandon, a scene unfolds that Rural Retreat High School girls basketball coach Pete Fiscus has witnessed time and time again.

Here comes senior Brelyn Moore outworking, outhustling and outjumping the others to successfully come down with the carom thanks to that perfect blend of athleticism, anticipation and aggressiveness.

Some of her ability to get so many rebounds can also be chalked up to being country strong since Moore has diligently worked on her family’s cattle farm in Wythe County, Virginia, for as long as she can remember.

“Coach has always bragged on my sister [Talyn] and I and said we are the strongest because we have thrown hay bales our whole life,” Moore said.

A 5-foot-10 ½ farm girl, Brelyn Moore is harvesting hoops attention this winter as she’s averaging 15.2 points, 13.9 rebounds, 3.1 steals and 2.3 blocks per game with 14 double-doubles in 17 games in leading the way for the Indians (12-5) in their rise to the top of the Hogoheegee District standings.

“We did not have very good games at the beginning of the season,” Moore said. “We have progressed a lot and are figuring everything out as a team. It finally hit me that I was a senior and I needed to give everything I have game in and game out. It still isn’t over, so we are trying our best every day.”

Moore is an atypical three-sport standout.

She was a second-team All-Region 1D selection in volleyball back in the fall after smashing down her share of spikes for the Indians.

Moore has been a four-year member of the varsity hoops team and is in her second season as a starter.

Sure, that’s not that unique as plenty of high schoolers play basketball and volleyball.

Yep, she hops on her quarter horse she calls “Wish” and barrel races, an activity she has partook in the last four years.

“There aren’t really any similarities [with basketball], besides having to practice and keep my horse in shape,” Moore said.

However, there is one common thread that runs through any competition with Moore.

“Her will to win, or maybe it could be better said her will not to lose,” Fiscus said. “She is willing to do whatever it takes for her team to be successful. She has always been that way.”

It was evident in a 54-42 win over Lebanon earlier this month when Moore went for 20 points and 11 rebounds in a key district victory.

“I got into early foul trouble and I had to play with four fouls,” Moore said. “I was very proud of the team for stepping up when we needed that win.”

That shows the maturity Moore has gained from her varsity experience.

Rural Retreat won the Hogoheegee title last season and advanced to the regional semifinals, dropping a 32-27 overtime decision to Grundy. The Indians couldn’t hold an early nine-point lead in that season-ending loss.

Moore had six points and fouled out.

“We knew we were the better team and it was a missed opportunity,” Moore said. “It was very hard to get over. It took me several days to go back and watch the film. I still think about that game quite frequently, but it motivates me to do even better and get back into that spot. It is a feeling that is hard to describe. I want my teammates this year to be able to experience it. It makes me really strive to do better each game and to play for each other.”

Moore has certainly stepped up her game after the Indians lost five seniors from last year’s squad.

“Coach and I talked at the beginning of the season and he told me one of my goals needed to be a double-double each game, because I was capable of doing it,” Moore said. “I wouldn’t be able to get these double-doubles if it wasn’t for my teammates helping me on the court. That is one of my main goals for each game. I try my best to get one to help the team.”

One of those teammates is her younger sister, Talyn. Their father, Christopher, was the head football coach at Rural Retreat from 2010-2013.

“Talyn and I are really close off the court,” Brelyn Moore said. “I love playing ball with her because she knows how I play and we have a strong connection when we play together. She is such a selfless player and so athletic.”

Moore will look for more success on Tuesday night as Rural Retreat plays at Patrick Henry.

Don’t be surprised if another double-double is recorded by the erstwhile barrel racer.

“Brelyn is willing to outwork her opponents,” Fiscus said. “She plays with an internal drive that is second to none. She has the mentality that every rebound is hers.”

Randy Smith was the mastermind behind the cross country course at Sugar Hollow Park in Bristol, Virginia, designing the challenging three-mile…

Randy Smith, the longtime cross country coach at John Battle High School, passed away on Thursday according to school officials.

J.I. Burton's Clay Hart was the foundation of the offense that the Raiders excellently executed as he scored 28 points vs. Castlewood. Cannon Hill (Ridgeview) scored his 1,000th career point in an OT win, plus more.

Aidan Lowe returned to game action for the Honaker boys basketball team on Tuesday night after recovering from a leg injury during football season.

It had been almost three years since the Tigers had lost to a Class 1 team, that coming in the Region 1D finals to Patrick Henry on February 29, 2020.

The Union Bears were saved by Gracy on Tuesday.

Brody Jones had been spending many hours in the Margaret H. St. John swimming pool at Virginia High rehabilitating the fibula in his right leg that was broken in a VHSL Region 2D playoff football game against the Lee High Generals on Nov. 12.

The Oak Hill Academy “Road Warriors” completed another successful show at the Bearcat Den with another rousing performance.

IOC to allow Russian athletes to compete In 2024 Olympics

Rural Retreat senior Brelyn Moore has recorded 14 double-doubles in 17 games for the Indians, who are currently in first place in the Hogoheegee District.

Rural Retreat senior Brelyn Moore isn't just a standout in basketball and volleyball for the Indians but is also a talented barrel racer with her quarter horse "Wish."