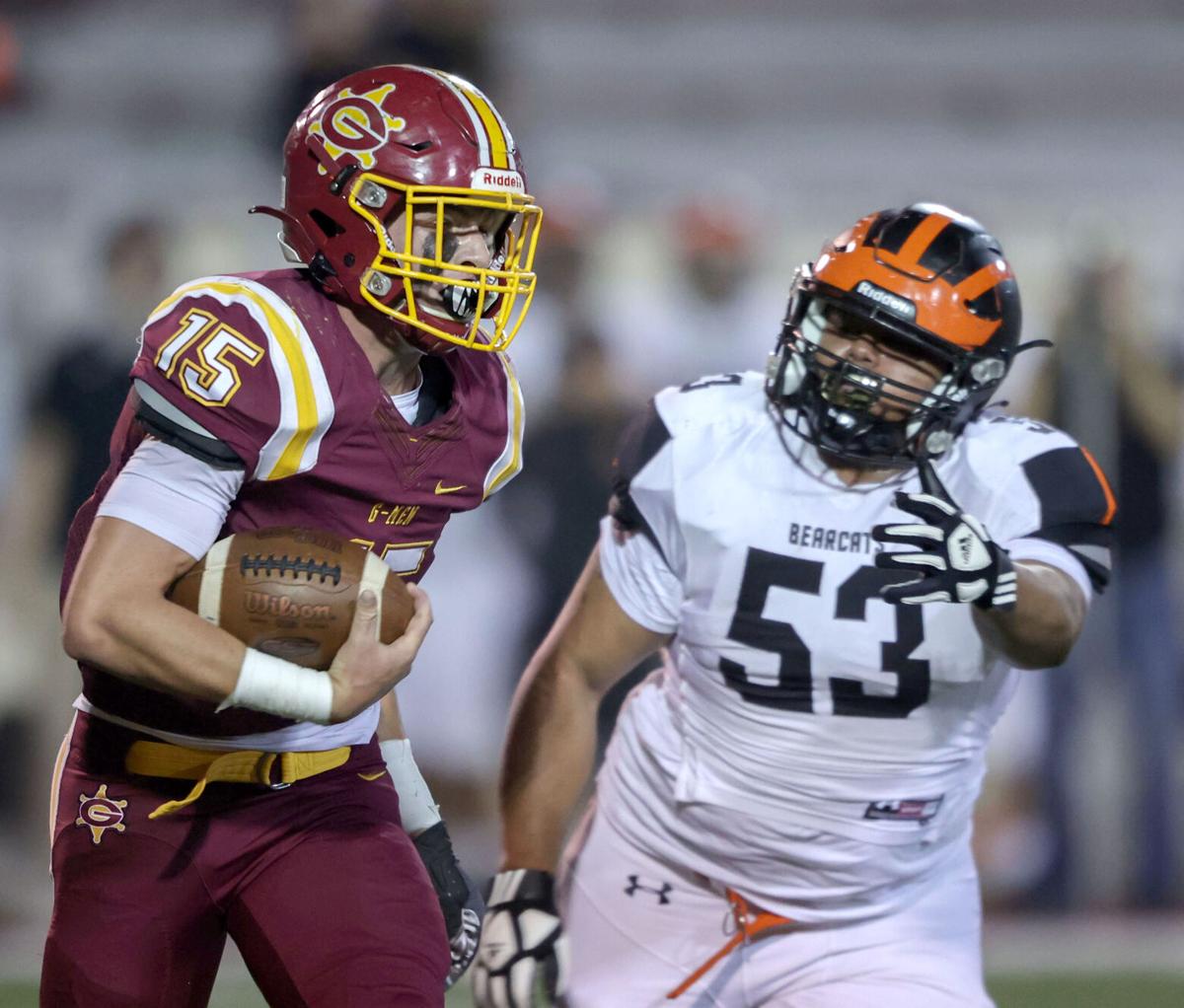 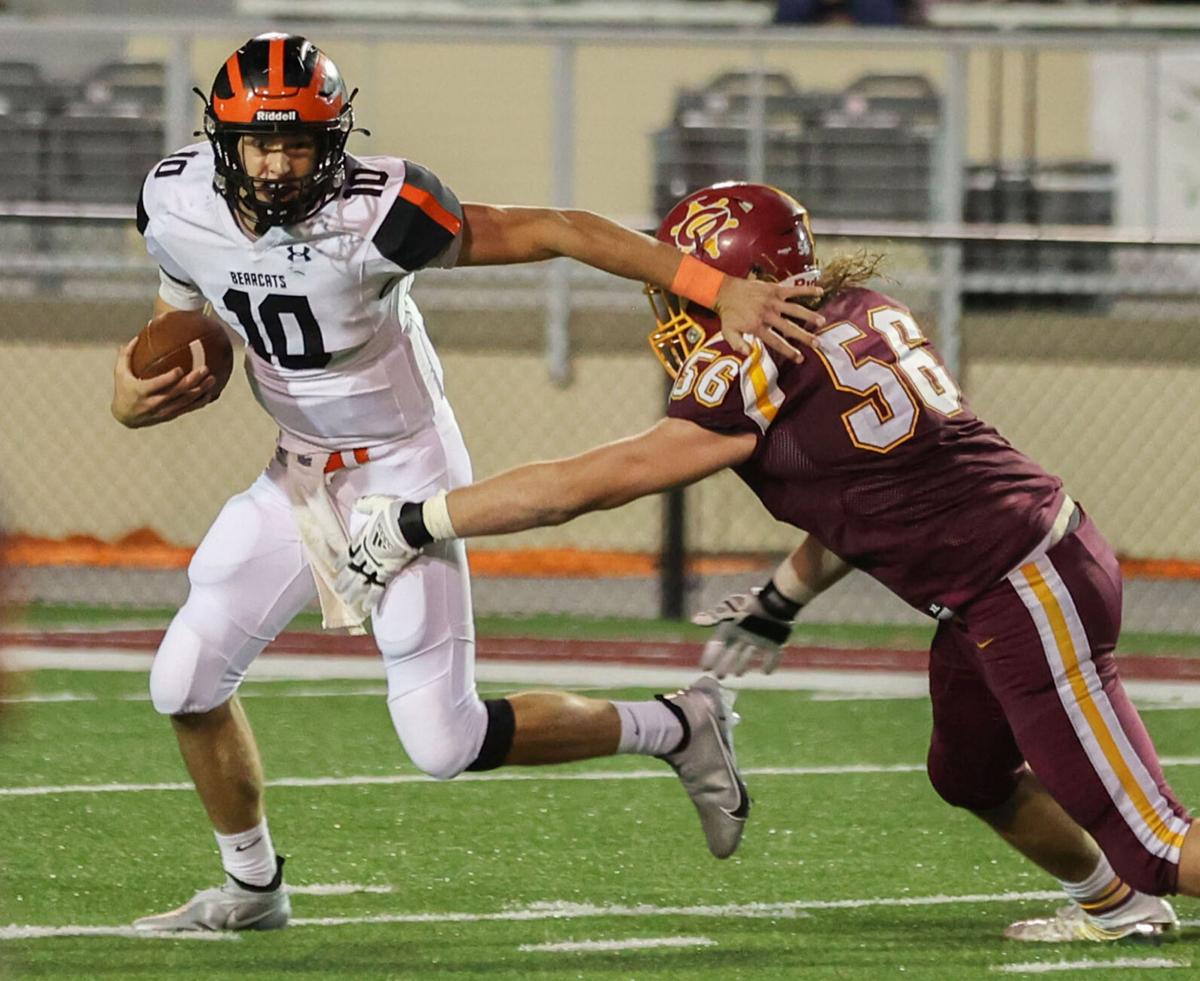 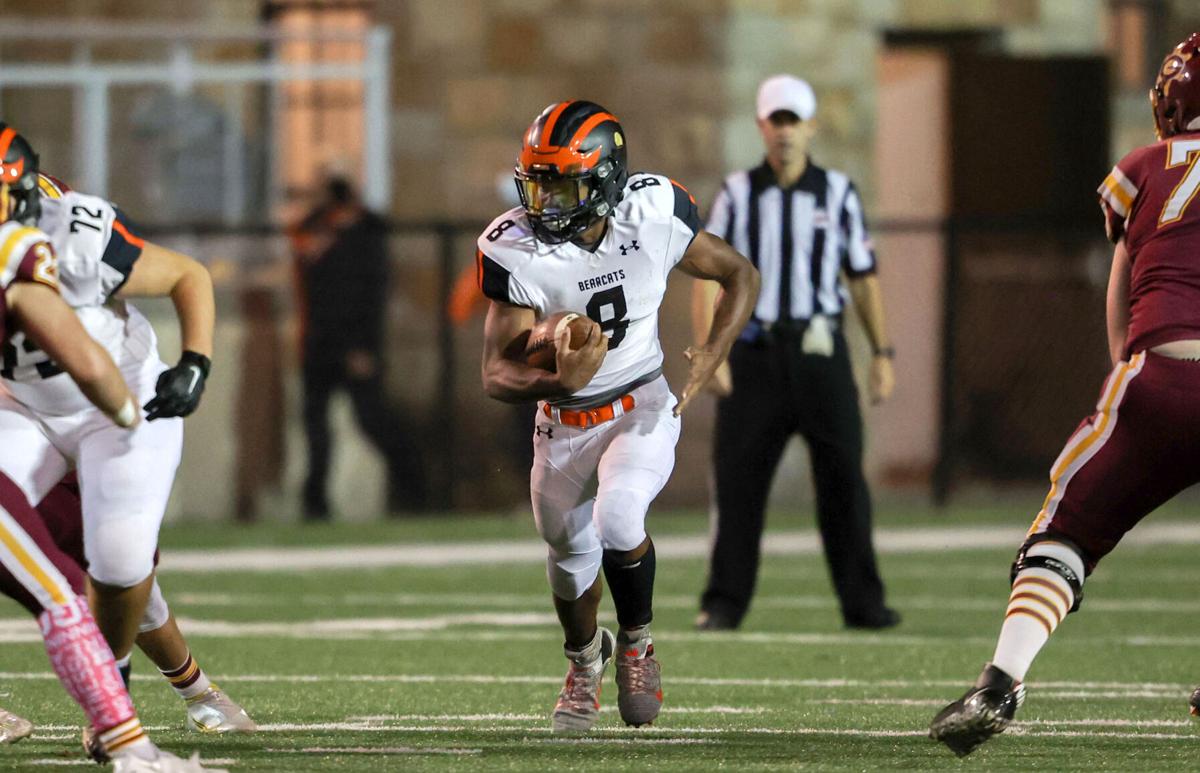 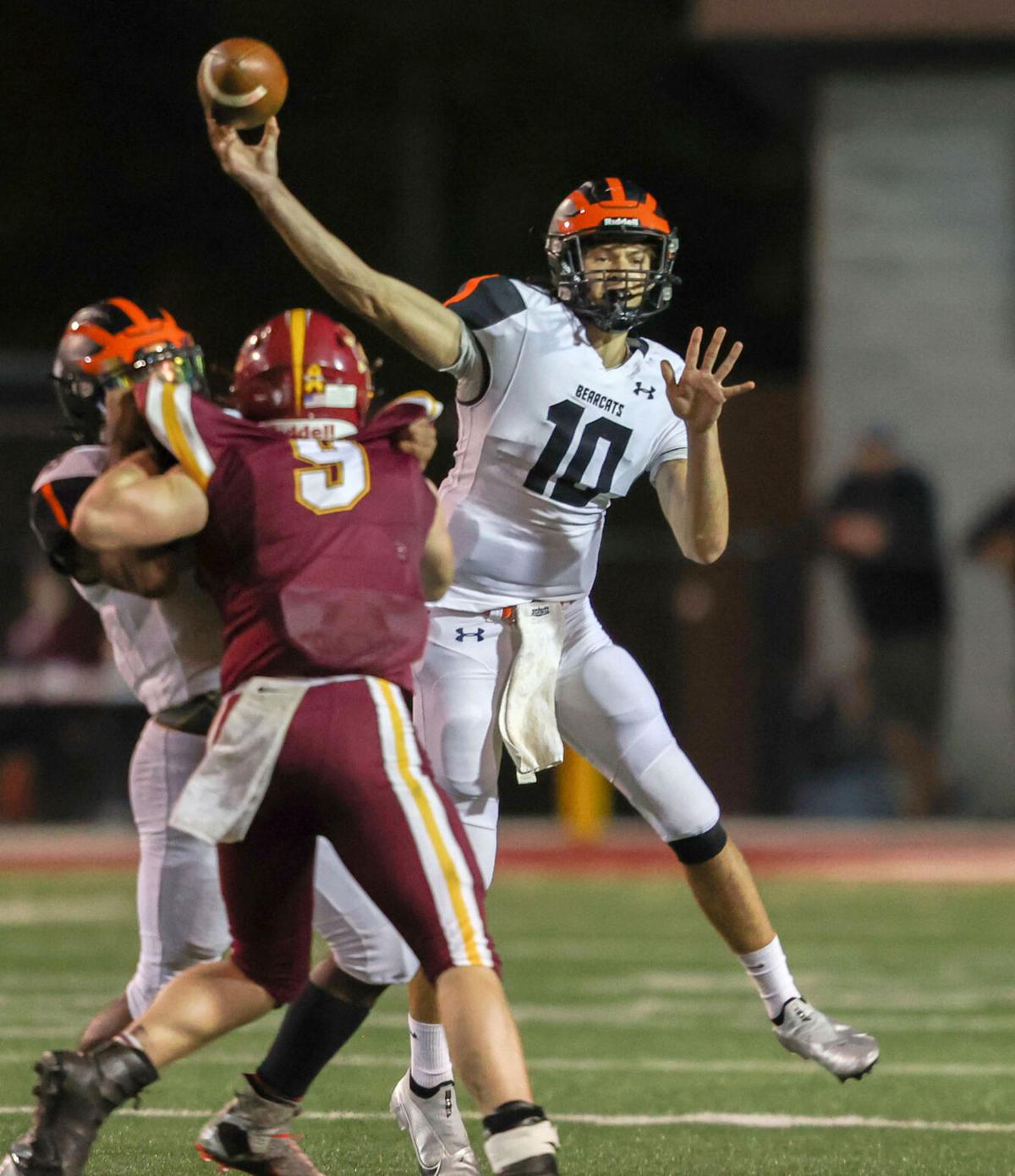 VHS QB Brody Jones had a big game for the Bearcats in a 35-0 win over Lebanon on Tuesday night at Gene Malcolm Stadium. 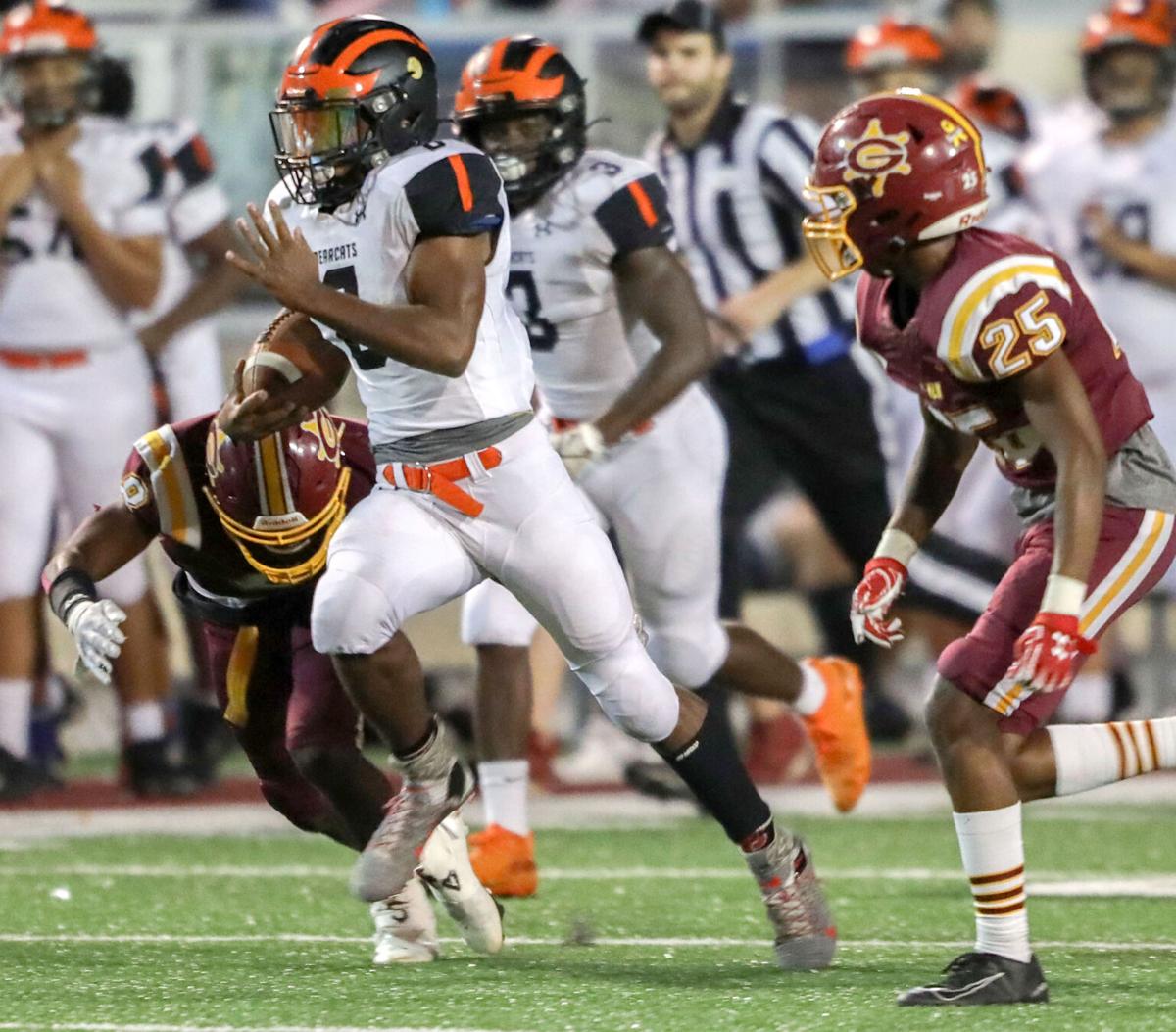 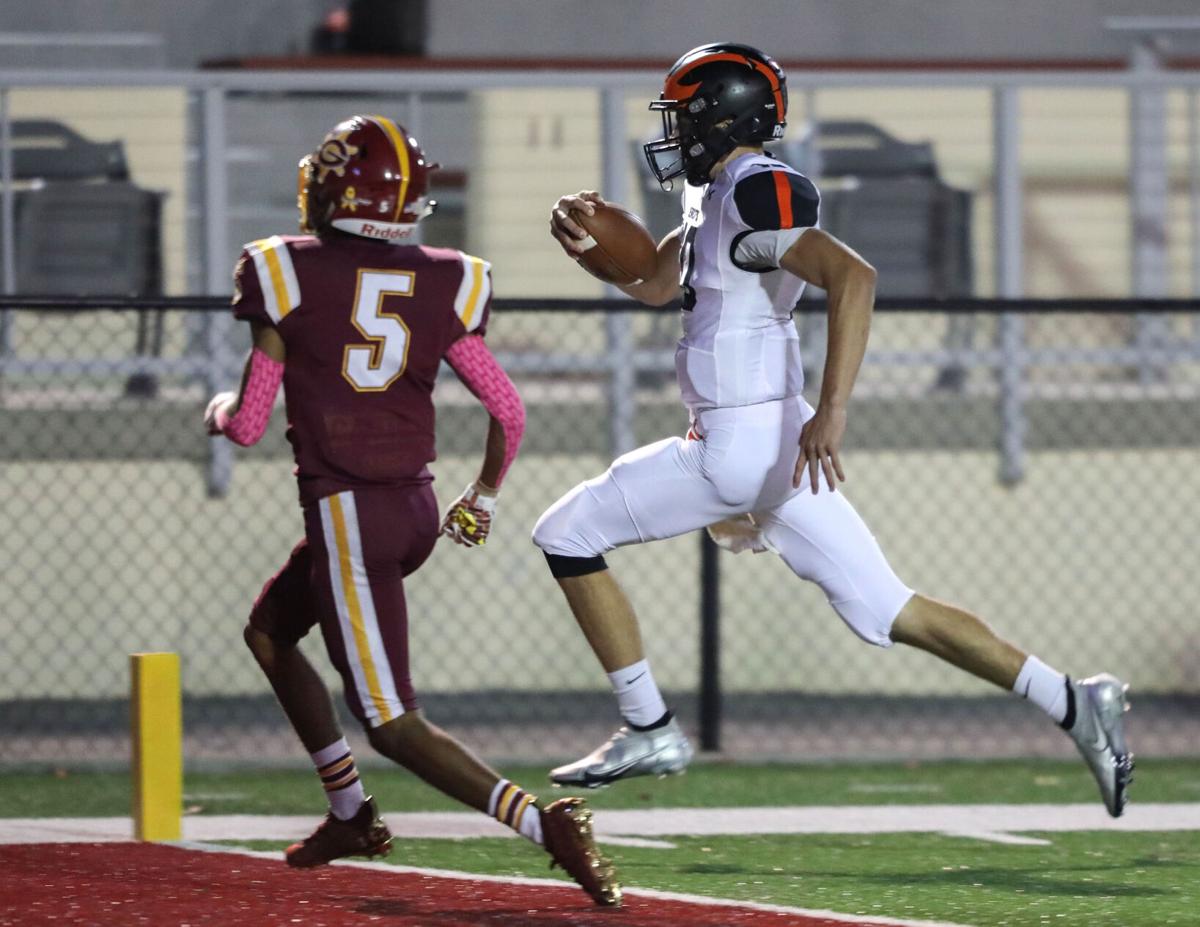 BLUEFIELD, Va. — It doesn’t pay to shake up Xayvion Turner-Bradshaw.

The versatile Graham athlete scored five touchdowns on Friday night, after being sidelined on a freak play in the first quarter, to lead the G-Men to a 56-23 victory over their rivals at the top of the Southwest District, the Virginia High Bearcats.

The squads came into Mitchell Stadium with matching 5-0 records. Both teams had demonstrated speed and power, matched with athleticism and strategy.

The G-Men left after demonstrating that, at least on this night, they were the better at it.

In the early going, neither offense could get cranked up, and punts ended the first five possessions.

The Bearcats drove 63 yards in just four plays late in the initial period. Quarterback Brody Jones put the exclamation point on the series by weaving across the turf for a 25-yard scoring jaunt.

“We got off to a fast start,” said Virginia head coach Derrick Patterson. “As we got further into the game, we didn’t settle in and make the plays we needed to.”

Turner-Bradshaw, was shaken up midway through the first half and walked off the field for a play. He said a Virginia High player wound up jamming his cleats into the lower part of his face mask.

“That really just drove me,” Turner-Bradshaw said. “They scored, got the first score of the game. And I hate getting scored on first. So I think that motivated me a lot.”

Taking advantage of a short punt, Graham covered 45 yards in 49 seconds of clock time. Turner-Bradshaw accounted for 41 of those yards, zipping into the end zone after taking a pass from Zack Blevins for 23 yards. Ben Morgan’s kick tied the game 7-7 with 8:01 remaining before halftime.

Blevins, showing his running talents, untied things less than four minutes later, fighting his way across the goal line on an 8-yard run to end a quick 50-yard possession.

Turner-Bradshaw tallied receptions for touchdowns on Graham’s next two possessions, with a 35-yard field goal by the Bearcats’ Brodie Cox sandwiched in between, to create a 28-10 halftime lead.

Turner-Bradshaw also ran a kickoff return 79 yards for a fifth touchdown early in the third quarter.

Virginia High took just two plays to record their next touchdown, a pass by Jones over the back of the defense to Patrick Poku, covering 37 yards. Graham scored the next 28 points to take a runaway lead, and the clock went into continuous mode near the end of the third period.

Stevie Thomas turned in a 59-yard touchdown run in the middle of the fourth quarter for the game’s last points. That gave him 104 rushing yards for the evening.

Graham was led statistically by Ty’Drez Clements and Blevins, who had 138 and 136 yards respectively. Blevins connected on half of his eight pass attempts, for 92 yards.

“We’re a little disappointed that they [the Bearcats] scored what they did,” Palmer said. “We felt like we made mistakes that allowed them to get those. In order for us to get better, we’re going to have to limit that, as well.”

Patterson said Graham is “a really, really good team. I was excited to see us come out and compete tonight, and kind of see how we stood up.

“For us, tonight, we didn’t respond as well as we should have to the adversity once they started scoring and making plays. We just didn’t step up. That’s on me. I’ve got to do a better job of getting us prepared, and making sure our kids understand that when you get the opportunity to make a play, you’ve got to make it.”

Virginia High is scheduled to host Chilhowie on Thursday at 7 p.m. and plans to play Lebanon on Oct. 26.

Pulaski County is next on the G-Men’s schedule.

MLB lockout: What you need to know

On the eve of an important game or in the aftermath of a crucial victory, the cell phone belonging to Holston High School football coach Chris Akers will buzz and alert him of an incoming text message from Tony Palmer.

If the Holston Cavaliers and Abingdon Falcons were to prevail in state semifinal games on Saturday they would produce the most important high school football wins in the history of Washington County, Virginia.

“It’s been a lot of fun,” Hall said. “I like being around all the guys and they have been super supportive of me from day one.”

VHS QB Brody Jones had a big game for the Bearcats in a 35-0 win over Lebanon on Tuesday night at Gene Malcolm Stadium.