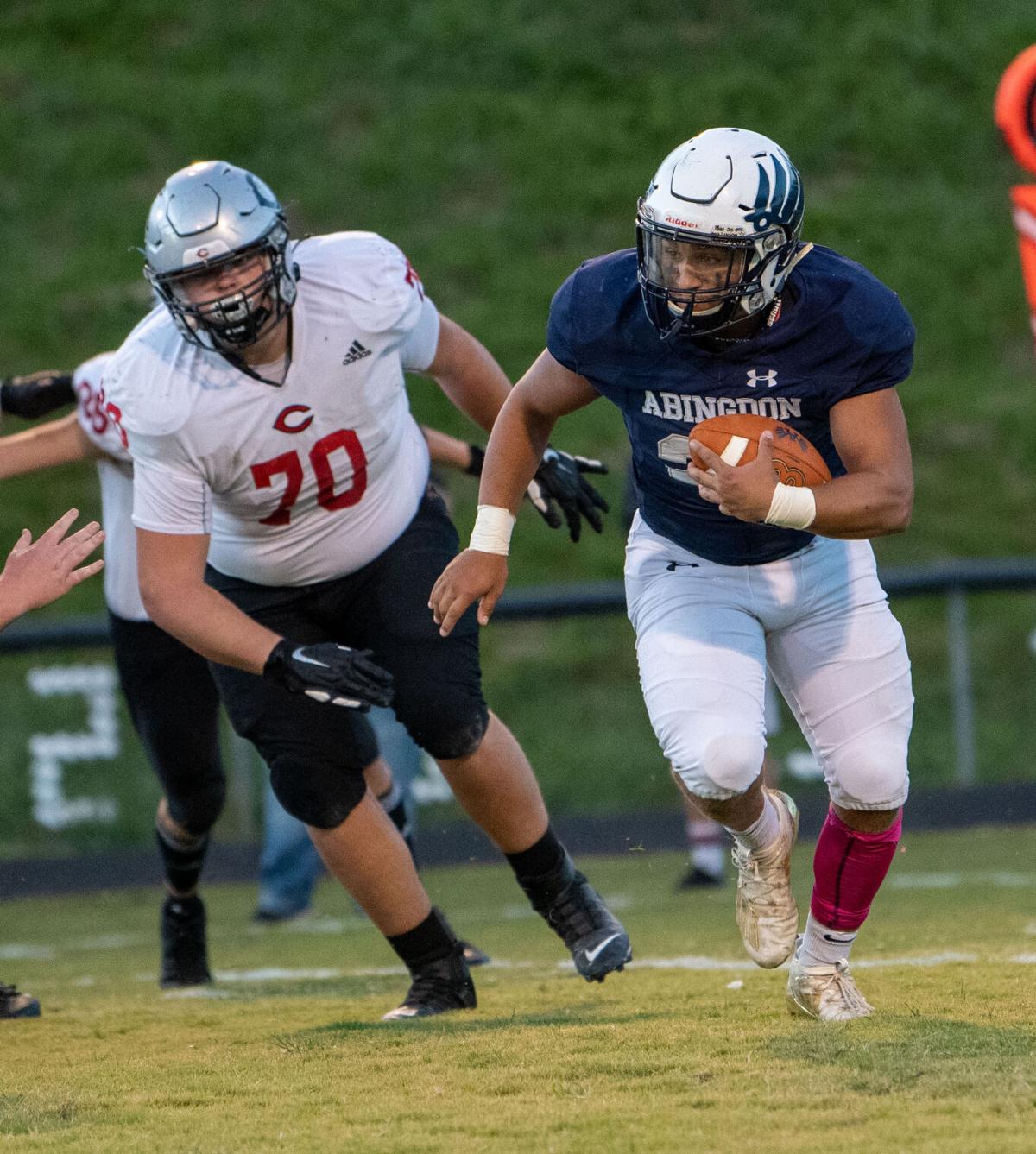 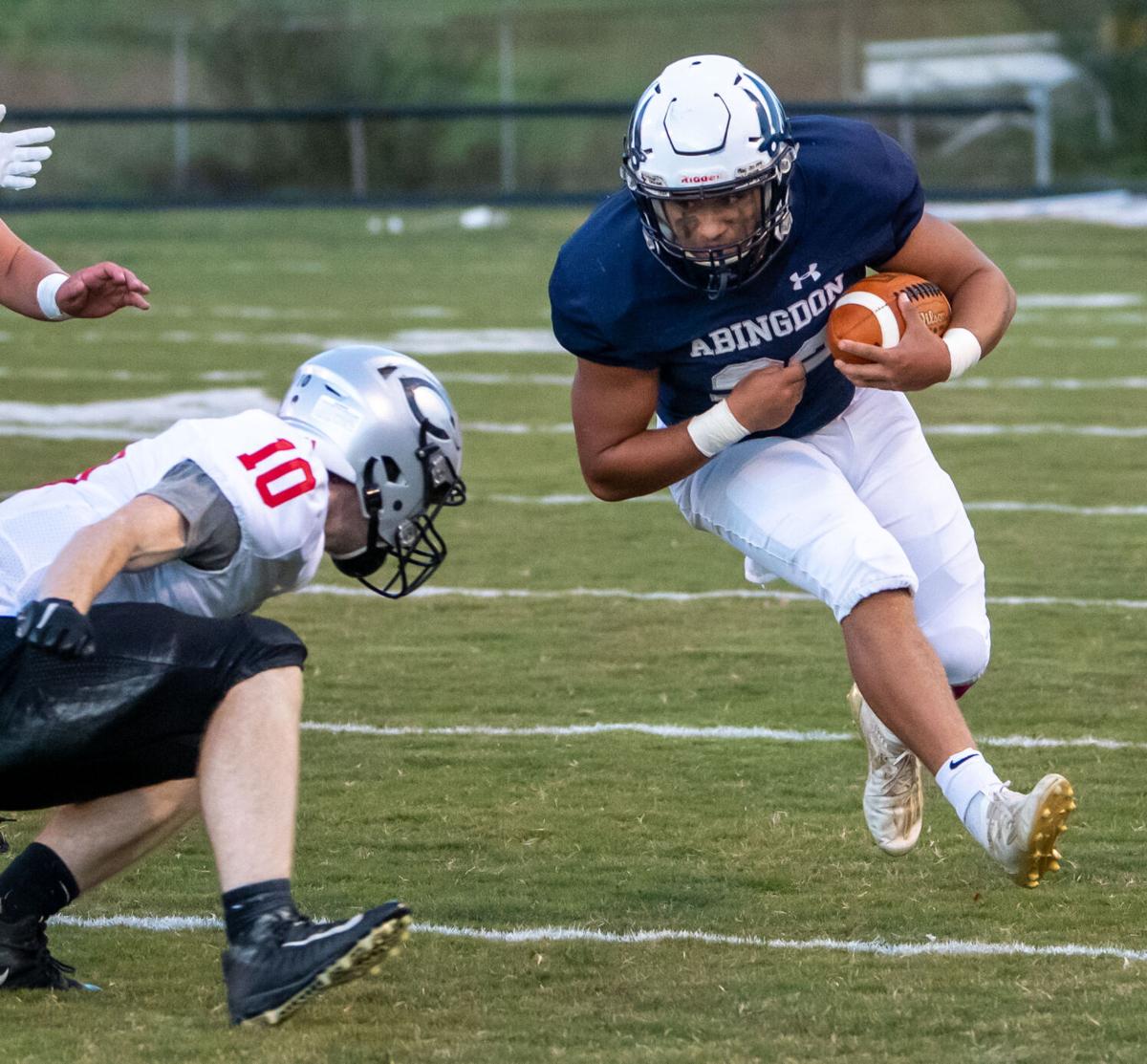 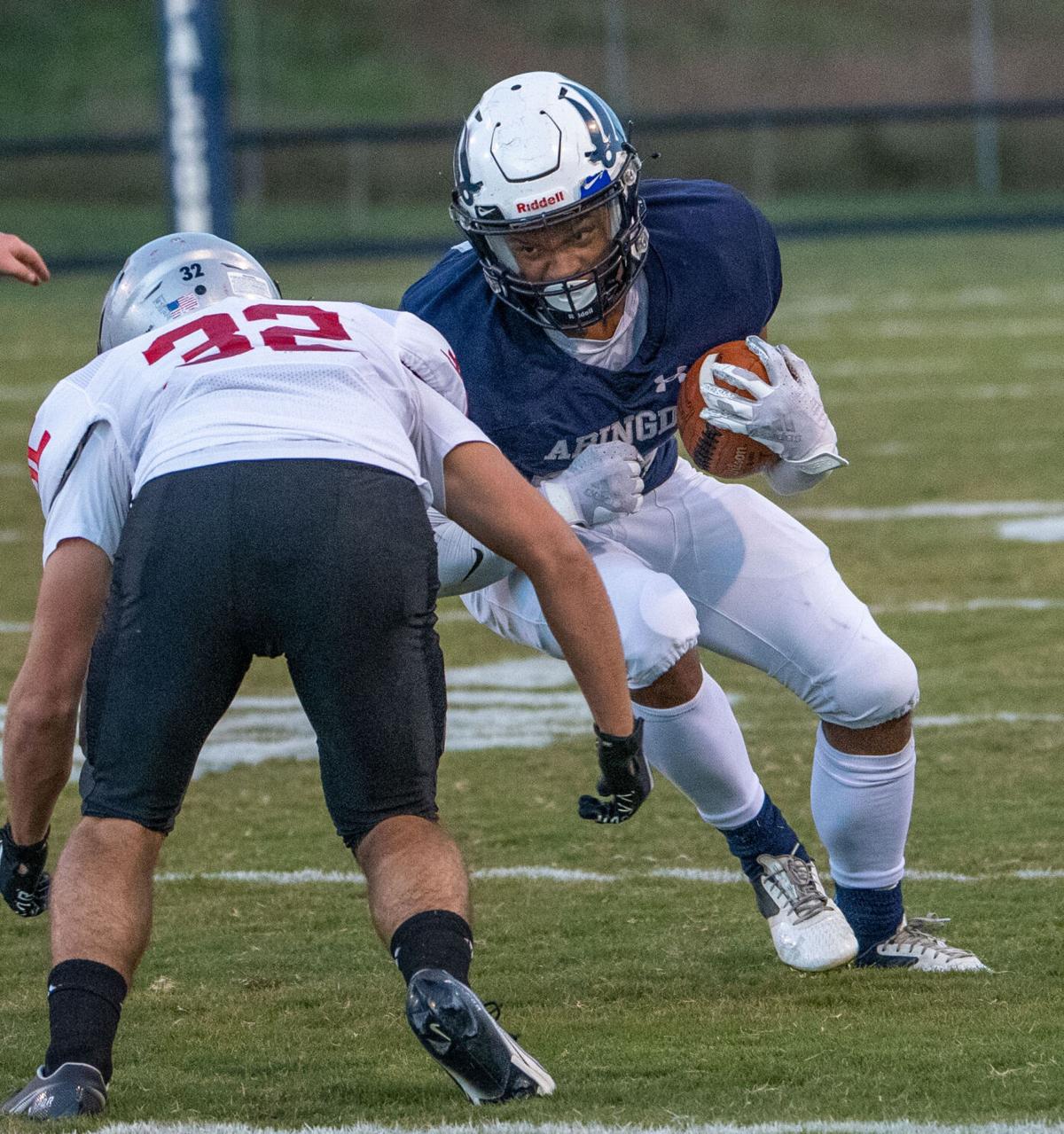 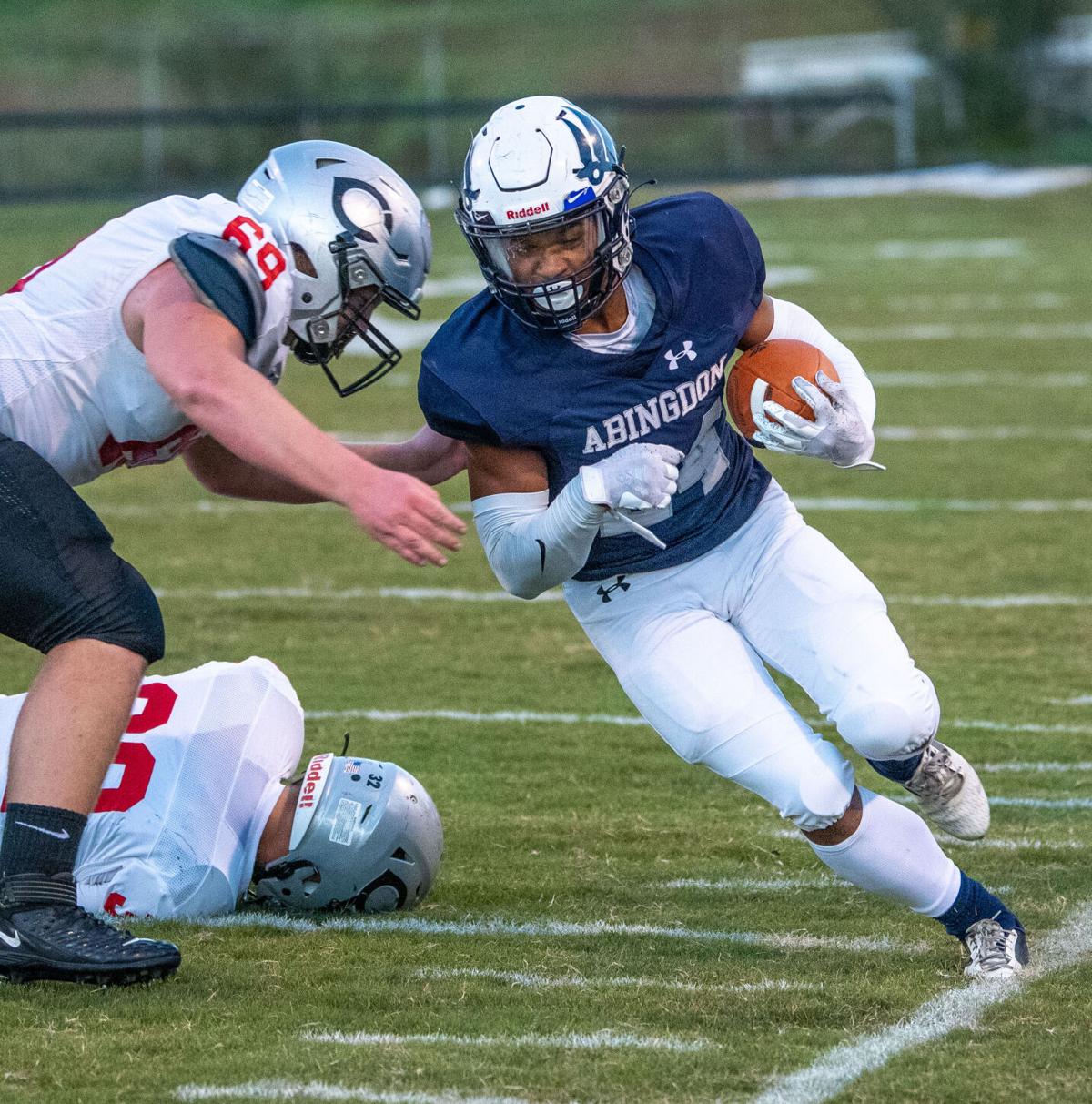 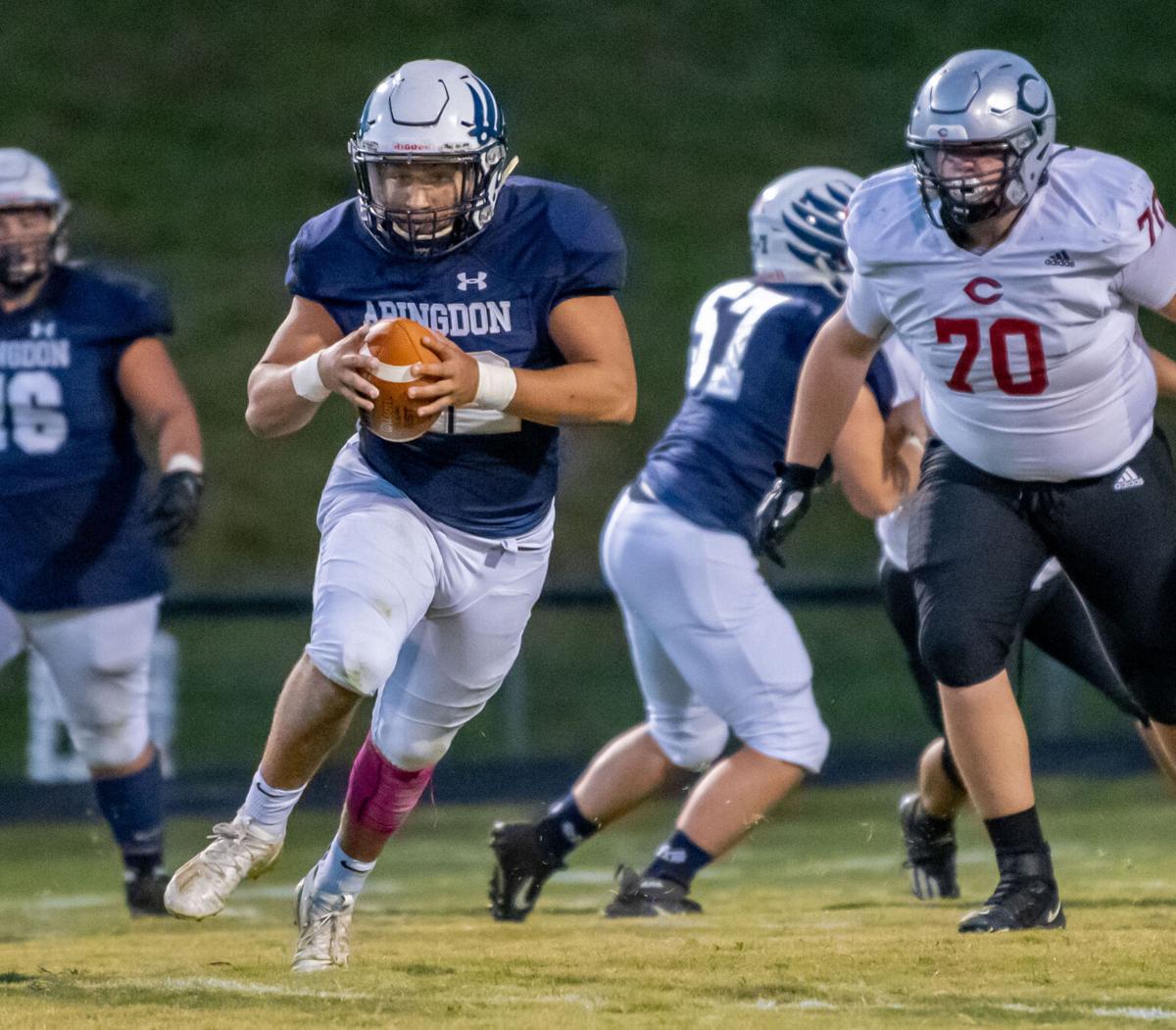 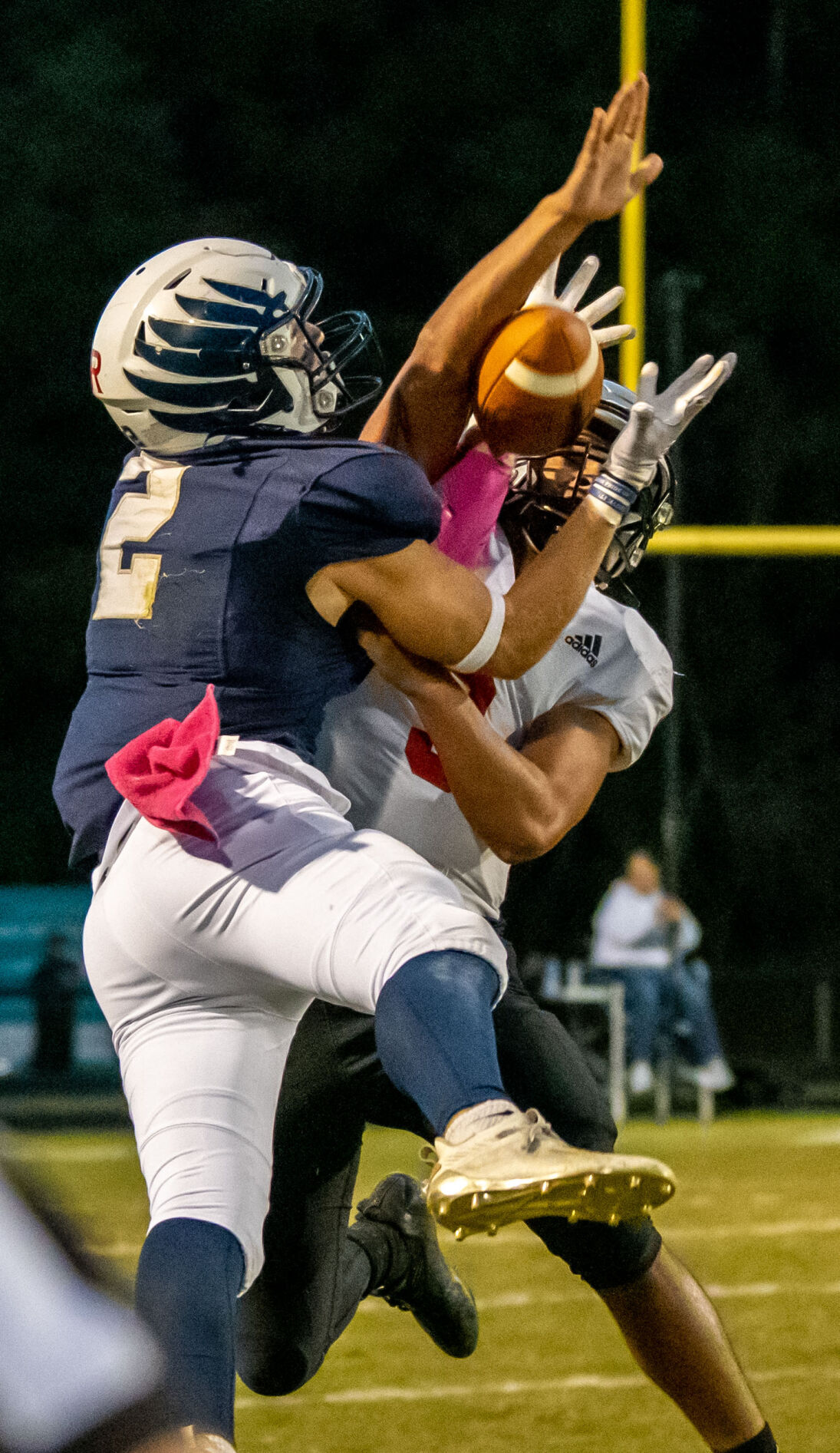 Haynes Carter makes the catch while being defended by Wise Central's Braeden Church last Friday night. Carter had a big night for the Falcons in Thursday's win against Marion. 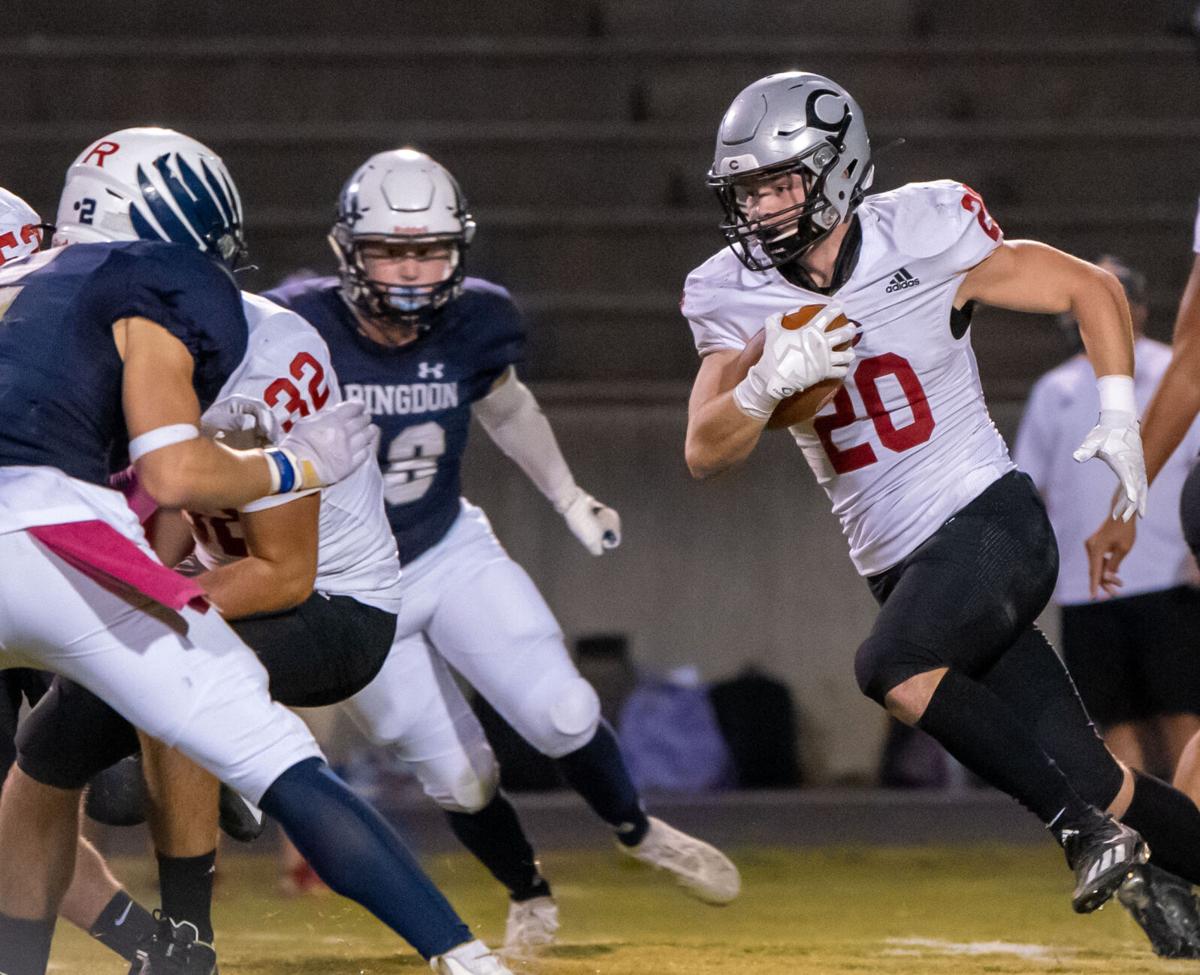 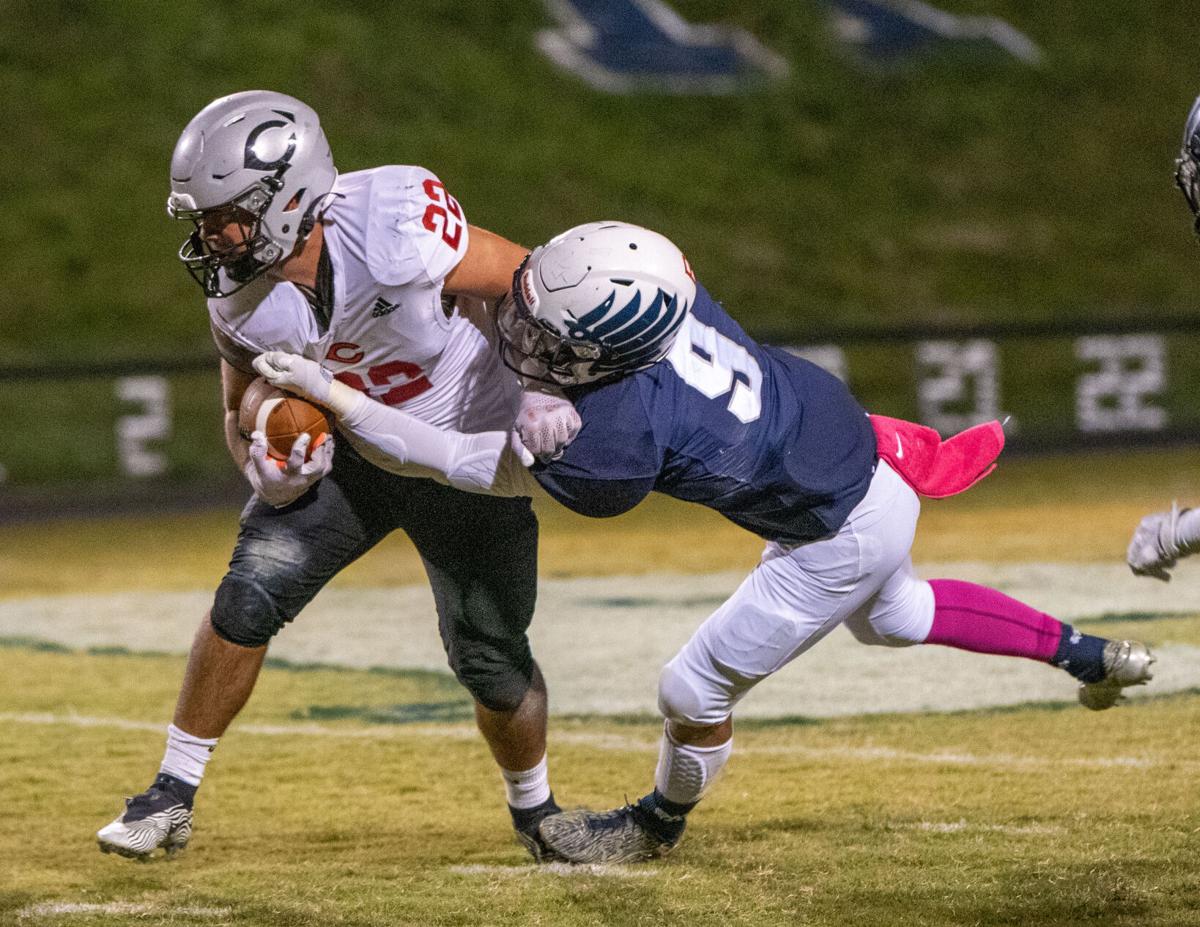 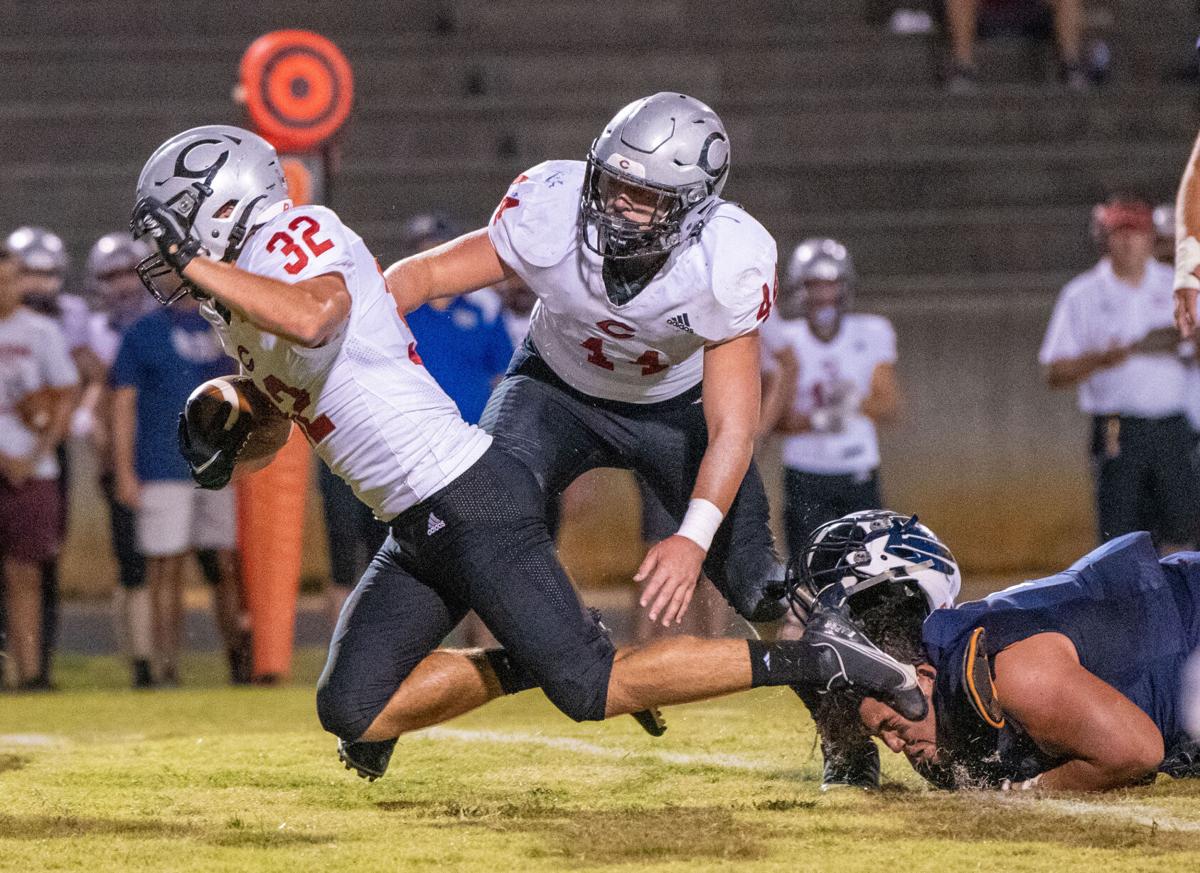 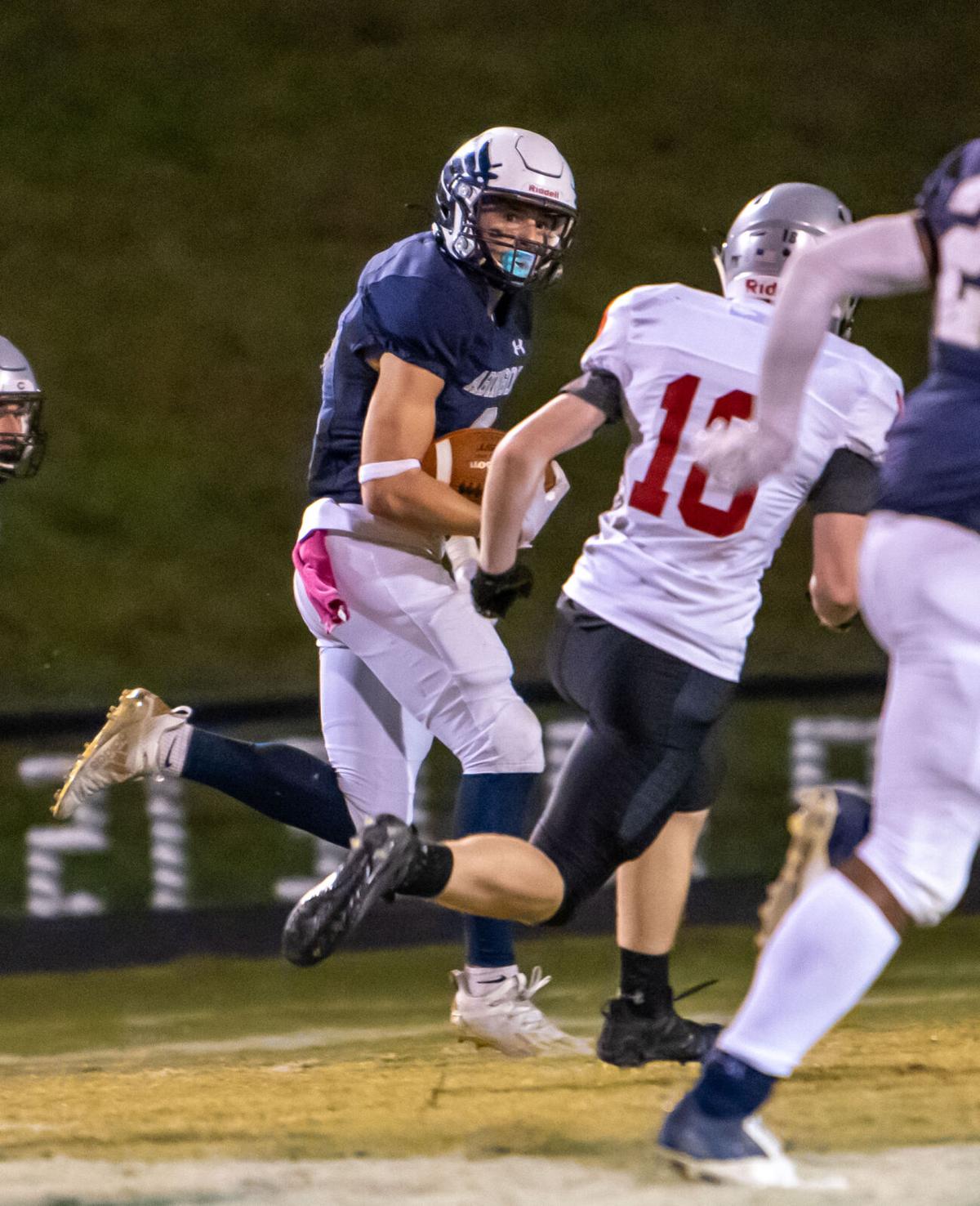 Friday, October 1, 2021. Abingdon #2 Haynes Cater looks back as he runs back a kickoff for a touchdown agains Wise Central. (Photo by Earl Neikirk/Neikirk Image)

After years of operating with a pass-heavy spread attack on offense, the Falcons went to a power-based I-formation.

That was sweet news for 285-pound offensive lineman Dasean Lucas and his big buddies.

“We like carrying the load,’” Lucas said. “About all of us have been playing together since midget league, and we know what to do.”

The AHS line corps paved the way Friday as the Falcons posted a 28-21 win over the County Central Warriors in a marquee Mountain 7 District game.

According to Amburgey, his plan to change offensive looks was hatched on the first day of practice in February.

“We didn’t know what we were going to get weather-wise in the spring, so I told my staff that we had the personnel to make the move,” Amburgey said. “It’s turned out to be a great offense for us.”

Abingdon (4-1, 2-0) relied on balance to open a 28-7 halftime lead. Cole Lambert passed for 101 yards a score, while the senior backfield tandem of Bishop Cook and Malique Hounshell combined for 105 yards.

“Bishop and Malique bring a little of everything – speed, power, blocking and the ability to catch passes,” said Lucas, who played through a sprained shoulder.

“We came out really physical and put together probably our best half of the season, but [Wise Central] is also physical and we don’t face like offenses like that often.”

That offense for Wise Central is a deceptive Wing-T. By running off-tackle with powerful junior Dustin Sturgill and working outside with speedy senior Matthew Boggs, the Warriors (2-3, 0-2) controlled the ball in the second half.

“We’ve just got to start faster. That’s the battle of the last two weeks,” Wise Central coach Luke Owens said. “We’ve just started dadburn games so slow that we’re having to claw and scratch to get back into it.”

Wise Central opened the second half with a 70-yard scoring drive consisting of straight 15 running plays.

The suspense ended when Jackson Lane recovered the ensuing onside kick for AHS.

Did Owens use a fiery halftime speech to ignite his team?

No. It was just simple mental errors early like not getting lined up right on defense,” Owens said. “It looked we had been in quarantine for 10 days, and then we woke up in the second half.

“I thought we played well defensively, we moved the ball and did all little things we needed to win. We just didn’t get ourselves enough time.”

Boggs led the Warriors with 99 yards rushing on 19 carries, while Sturgill added 65 yards on 10 carries.

AHS opened the night with scoring-drives of 12 and 10 plays. When Wise Central pulled within 14-7 at the 6:31 mark of the second quarter, versatile AHS senior Haynes Carter answered with a 70-yard kickoff return for a score.

The remainder of the game was a chess match between head coaches and coordinators.

“We were trying to melt away that fourth quarter,” Amburgey said. “[Wise Central] did a good job running its offense, but we found a way to win.”

Thanks to their consistent line crew, the Falcons are grounding and pounding out victories behind their new I-Formation

“We’ve grown and improved with the offense,” Amburgey said. “We can throw out of it, we’ve got some special running backs that can do a lot of things, and that offensive line moves people.”

The Graham High School G-Men found out they won their first state football championship via a phone call.

HISTORY WITH HAYES: St. Paul made football memories in 2001

Daniel Davis makes gospel music these days and is working on his first solo album after a 12-year run strumming the guitar and providing vocals for the popular band Folk Soul Revival.

James Mitchell will play his next football game as a professional.

Graham head football coach Tony Palmer has long stressed the importance of a family connection in the G-Men program.

VHSL STATE FOOTBALL SEMIFINALS: Holston gets a rematch with Galax

Holston High School’s Lane Blevins trudged off the football field he calls home on April 23 after a 27-6 state semifinal loss to the Galax Maroon Tide, a pandemic-shortened spring season coming to a disappointing close for the Cavaliers more prematurely than the hard-hitting linebacker would have liked.

Mac McClung played his sixth game as a member of the G League’s South Bay Lakers on Saturday night and it was his best performance yet.

No name-calling, personal insults or threats. No attacks based on race, gender, ethnicity, etc. No writing with your caps lock on – it's screaming. Keep on topic and under 1,500 characters. No profanity or vulgarity. Stay G- or PG-rated.
1 of 10

Haynes Carter makes the catch while being defended by Wise Central's Braeden Church last Friday night. Carter had a big night for the Falcons in Thursday's win against Marion.

Friday, October 1, 2021. Abingdon #2 Haynes Cater looks back as he runs back a kickoff for a touchdown agains Wise Central. (Photo by Earl Neikirk/Neikirk Image)