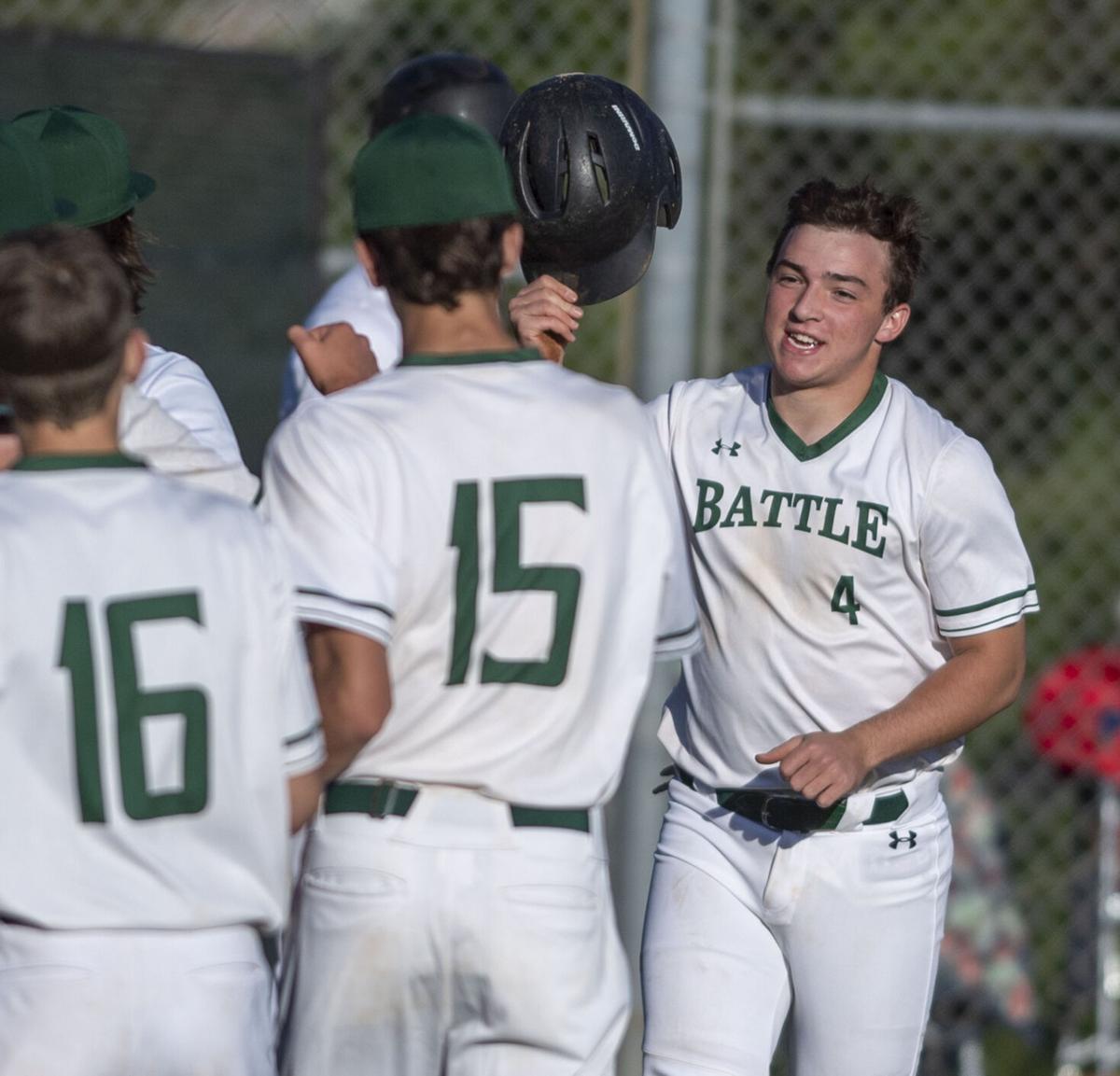 Battle's (#4) Bryson Almany is greeted by his teammates after scoring a run in the 2nd inning. 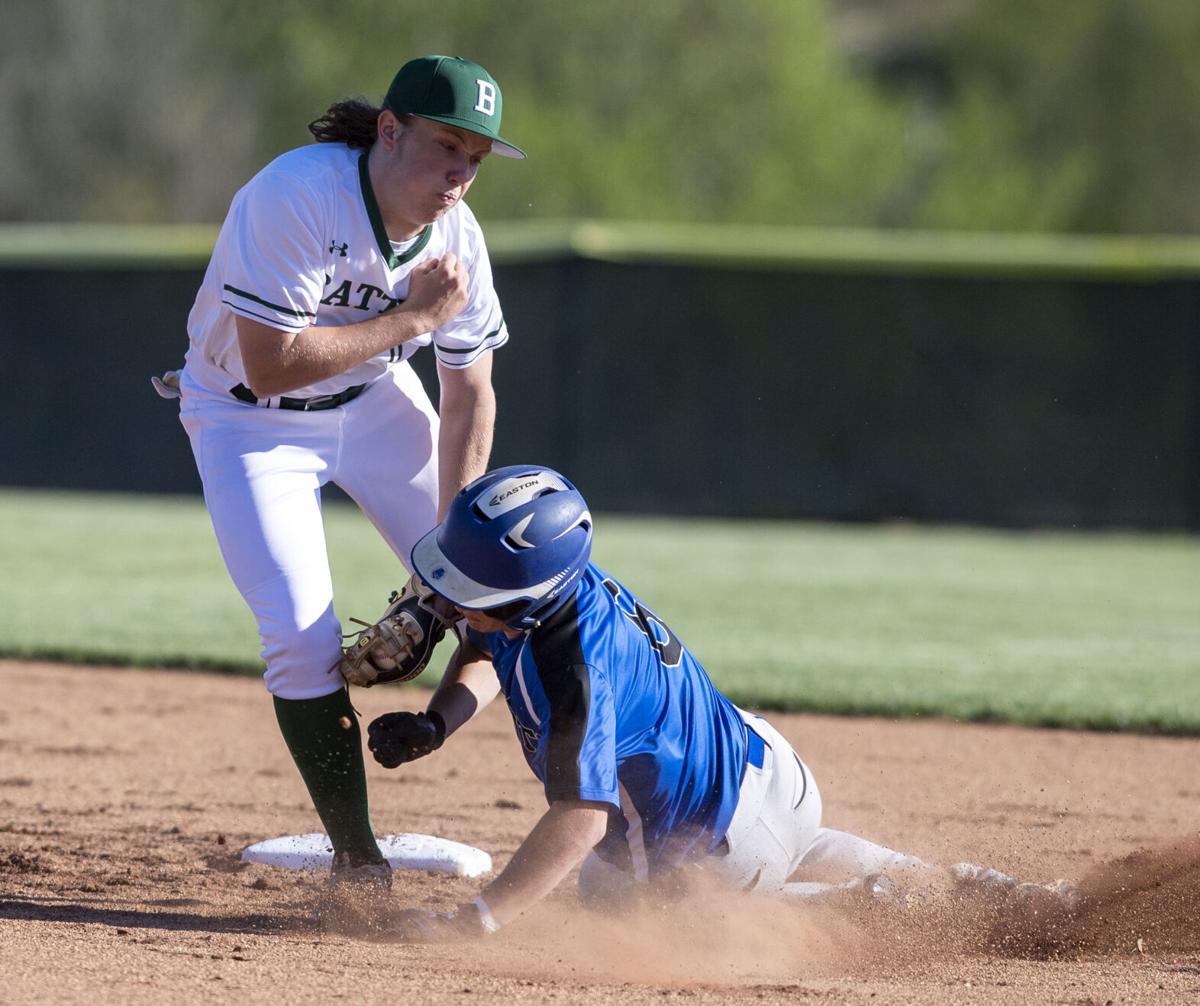 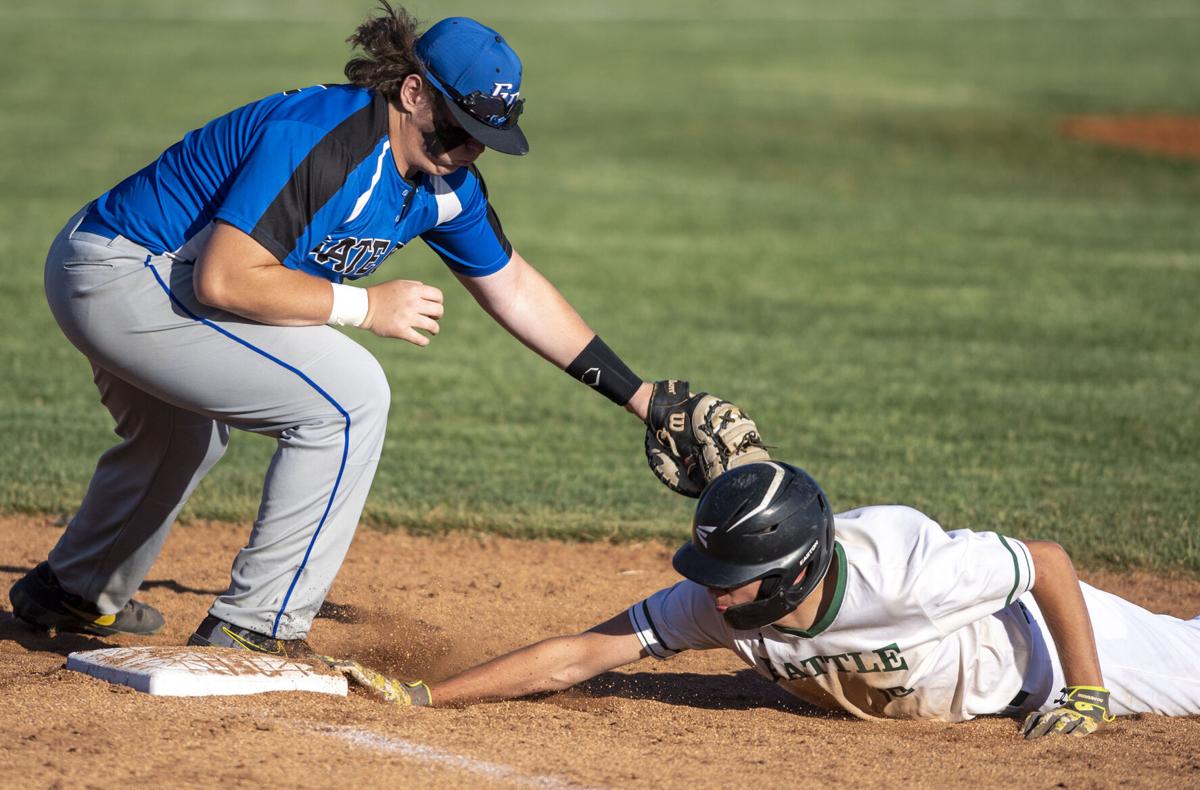 Battle Noah Sillis dives back to first base just ahead of the tag by Gate City's Carter Babb on a pickoff throw. 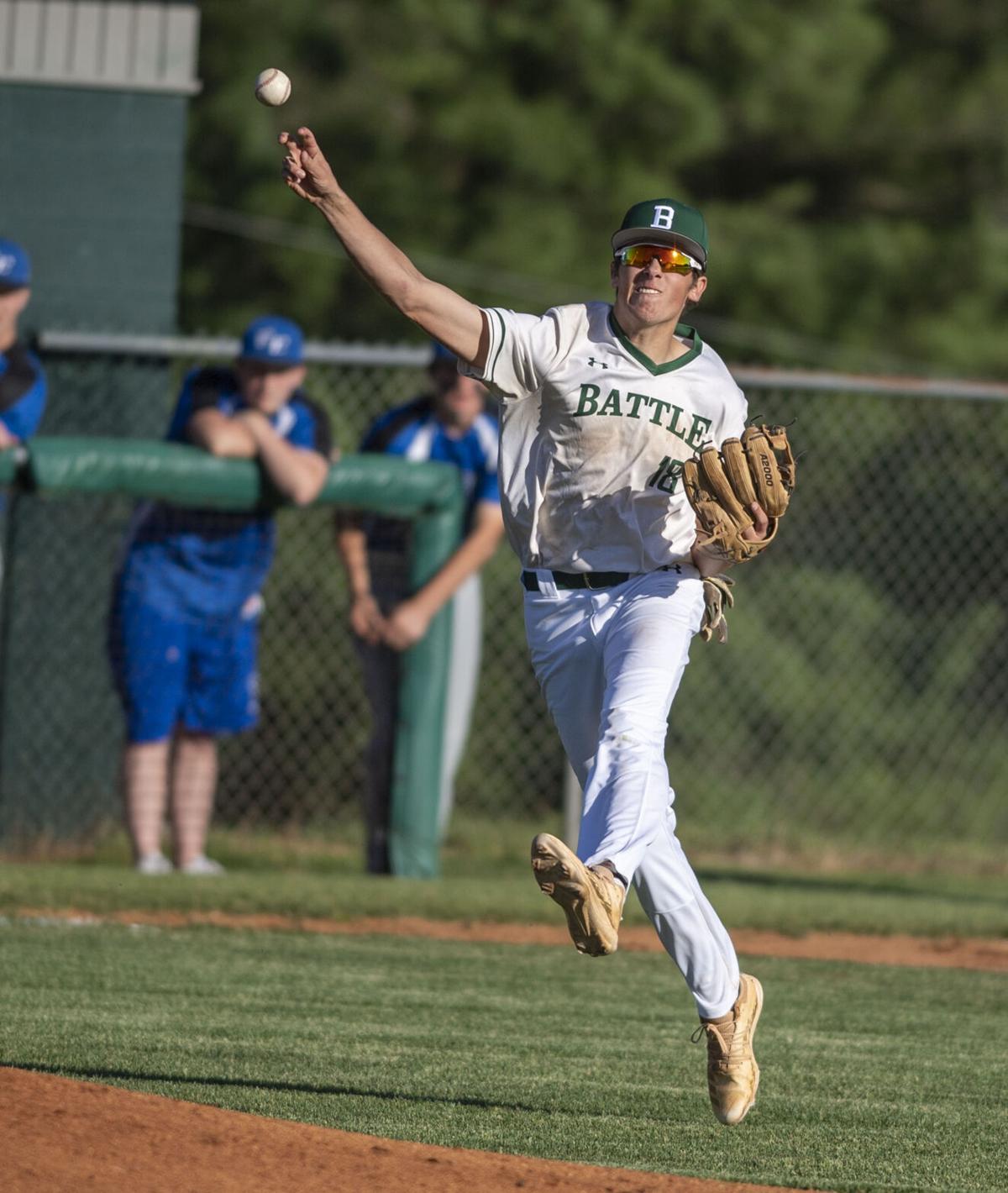 Battle 3rd baseman Noah Sillis makes an off balance throw to 1st for the out after fielding a slow hit ground ball. 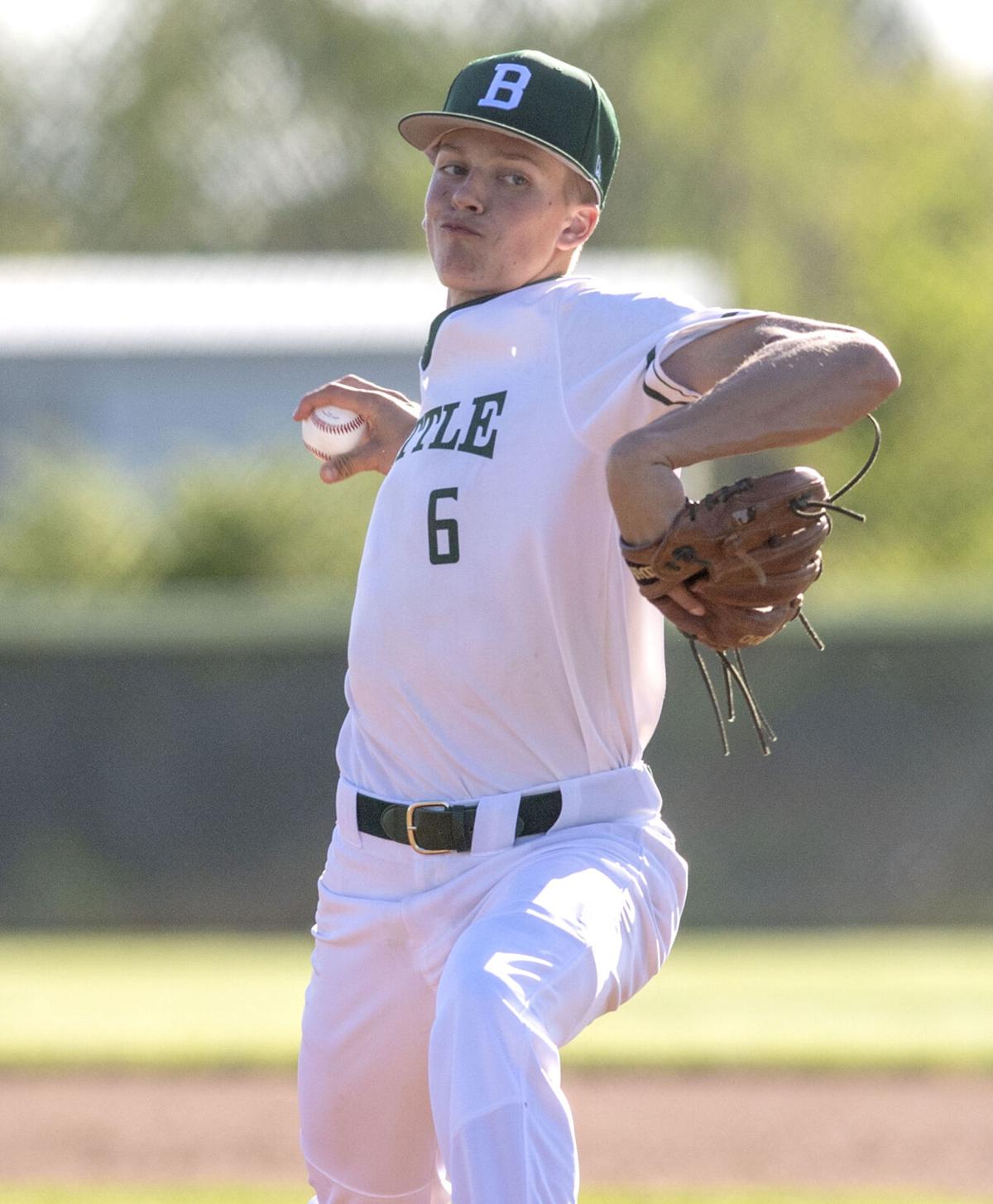 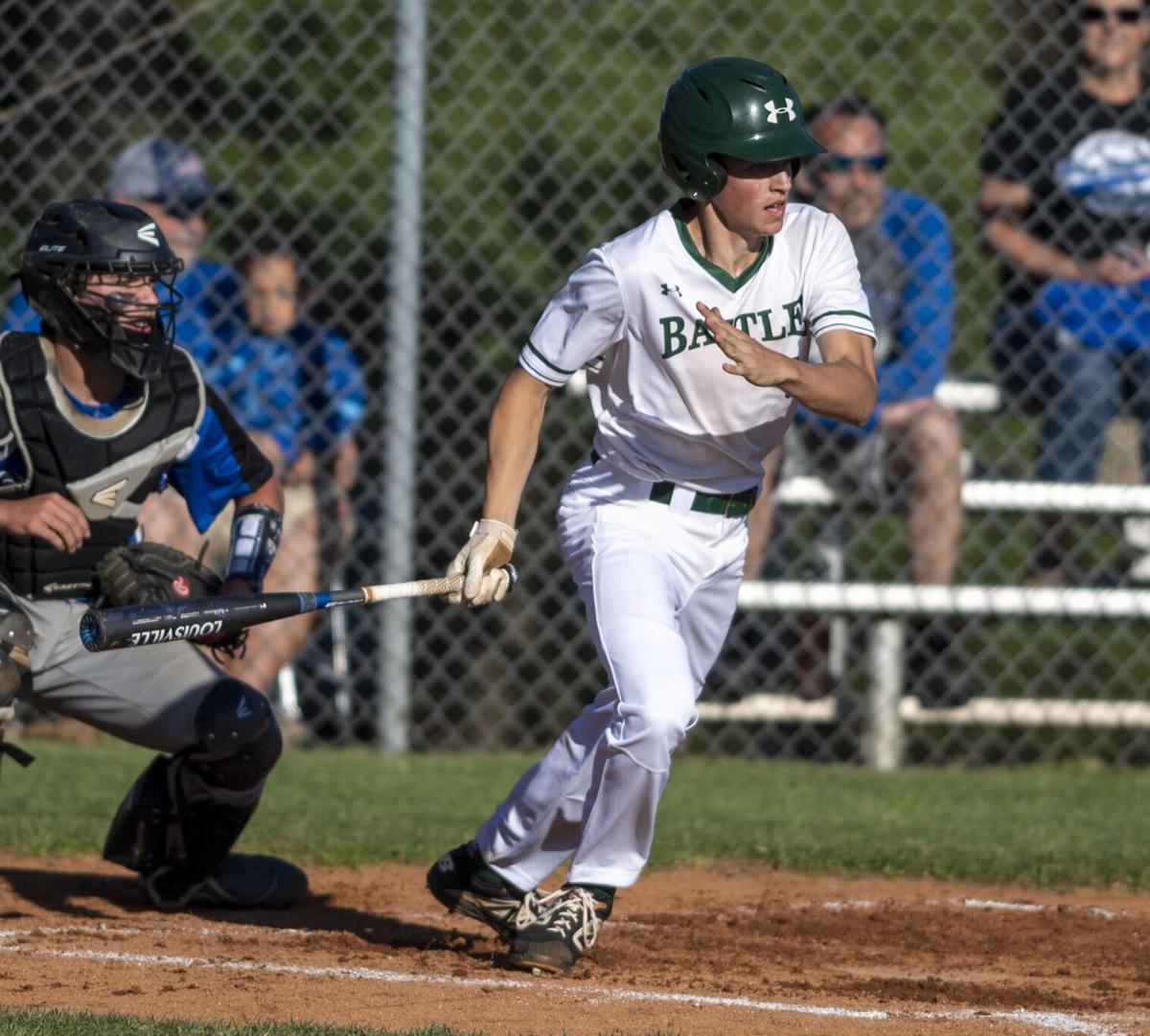 John Battle's Zach Smith takes off out of the batter's box after a hit in the 2nd inning.

BRISTOL, Va. – After nearly 22 months without baseball, no one was complaining about a little extra baseball on Friday night.

Nolan Sailor scored on a wild pitch in the bottom of the eighth inning, lifting the Trojans to a pulsating 8-7 Mountain 7 District victory over Gate City in the first game at Battle Field since May 31, 2019.

After missing the entire 2020 season due to the COVID-19 pandemic, there was a sense of excitement from both teams and a sizable audience that enjoyed a competitive game.

“It was crazy,” John Battle junior John-Alan Richardson said. “When we were warming up it is just the most surreal feeling knowing that we are playing baseball for John Battle again. It felt nice.”

In a game that featured 15 runs, 21 hits, seven errors and four lead changes, the Trojans had a runner called out at the plate earlier in the eighth inning, but loaded the bases and secured the victory when a pitch by Carson Jenkins to Ryan Mix eluded freshman catcher Luke Bledsoe and Sailor hustled in from third base to score the winning run.

Gate City (1-1), which opened the season with a 17-0 win over Union on Tuesday, took a 7-6 lead in the top of the sixth on an RBI single by Jake Taylor before the Trojans (1-0) tied it in the bottom of that frame on a passed ball.

Five straight hits to start the game led to a 3-0 first inning lead for Gate City on RBI singles by Ryan Jessee and Carter Babb, and one of four John Battle errors. John Battle went up 4-3, scoring once in the first on a double by Richardson, and added three in the second on a RBI single by Bryson Almany and two-run single from Zach Smith, who will play college baseball at King.

No one seemed to enjoy their time back on the baseball field more than Richardson.

Gate City went back up 6-4 on a pair of John Battle errors, with the Trojans tying it at 6-6 in the bottom of the third on an RBI single by Jacob Hutton and ground ball out by Gavin Ratliff.

“I don’t know if you call that fun. Holly molly, as a head coach who has done a lot of baseball, I will tell you, hats off to Gate City, that was one heck of a ball game,” said John Battle head coach Jimmy Gobble, who spent seven seasons pitching for the Kansas City Royals and Chicago White Sox. “A little distance and a little separation with some of the errors and defensive stuff, but their pitchers did an excellent job. The whole combination, Noah Sills really stepping up and giving us some quality innings helped.”

Sills replaced Zach Smith on the mound in the fifth and allowed just the Taylor RBI single in the sixth. He pitched the final 5 1/3 innings, and his defense played error-free the rest of the game.

“He is absolutely amazing, I love watching the guy pitch,” said Richardson, who played third base and shortstop for the Trojans. “I love playing defense behind him more than anyone.”

Taylor replaced Ryan Jessee in the fifth for Gate City, and was able to get out of a bases-loaded, one-out jam in a thrilling end to the sixth. Taylor fielded a bouncer back to the mound by Will Purifoy and retired the runner trying to score at the plate, but Bledsoe’s throw to first for a potential double play eluded Babb. Babb retrieved it and made a perfect throw home to retire Sailor trying to score from second base.

“It was a real exciting game. They had several plays, we had a double play there at home and another play where we kept the go-ahead run from scoring. It was a blast,” Salyer said. “[Babb] recovered good and made a great throw from way back there with a strike to home plate.

While Sills retired the final seven batters he faced to pick up the win, John Battle couldn’t score in the seventh with runners on second and third, but finally pushed across the game winner in the eighth.

Not a bad way to start the season for the Trojans, who had a shaky start, but finished on top.

“We just want to have fun again and perform,” Richardson said. “I wouldn’t call it nervous, I would just say we had first game jitters, but they are gone now and we are good.”

“They are young, but give us a couple of weeks,” Gobble said. “I think we will shore up some defensive stuff, but I will tell you, that was a fun ball game to be a part of it.”

Gate City had 11 hits, including two each by Ethan Fleming, Trevor Herron, Taylor and Bledsoe. Babb scored two runs in the loss.

“We got to play Tuesday, but haven’t played in a year in a half until Tuesday and then we get to come out and play today and play in a great game like that, it was pretty fun,” Salyer said. “They made one more play than we did.”

The Gene “Pappy” Thompson Award for Excellence originated in 1982 to recognize an area high school student-athlete who exhibits exemplary athletic skills, but who also excels in the classroom and who gives of his or her time performing community service.

Bill Moore has been around baseball much of his life, and decided to become a high school coach at age 65 with the Holston Cavaliers. He picked up an 18-4 win over Eastside in his debut on Wednesday. His son, Adam Moore, is a former head coach for the Cavaliers and is now an assistant at Virginia High.

Lebanon started the season by sweeping its Russell County foes, defeating Castlewood 17-0 on Tuesday and topped Honaker 14-2 on Thursday.

The softball squad at Eastside High School has been on the winning side thus far in 2021.

PREP SOFTBALL: Race for top in Hogoheegee District softball is up for grabs

The race for the top in Hogoheegee District softball is expected to be up for grabs. Four of the five teams received at least one first place vote in the preseason coaches poll.

Karleigh Stephenson played the role of hero on Thursday night, crushing a three-run home run in the bottom of the seventh inning to lift Northwood to an 11-9 softball victory over Virginia High.

With 11 seniors, including at least four college bound players, Abingdon is the favorite to finish on top in the Mountain 7 District baseball race. John Battle received the only other first place vote and his projected second in the league.

Baseball is back in Southwest Virginia, and that is a good thing.

Battle's (#4) Bryson Almany is greeted by his teammates after scoring a run in the 2nd inning.

Battle Noah Sillis dives back to first base just ahead of the tag by Gate City's Carter Babb on a pickoff throw.

Battle 3rd baseman Noah Sillis makes an off balance throw to 1st for the out after fielding a slow hit ground ball.

John Battle's Zach Smith takes off out of the batter's box after a hit in the 2nd inning.