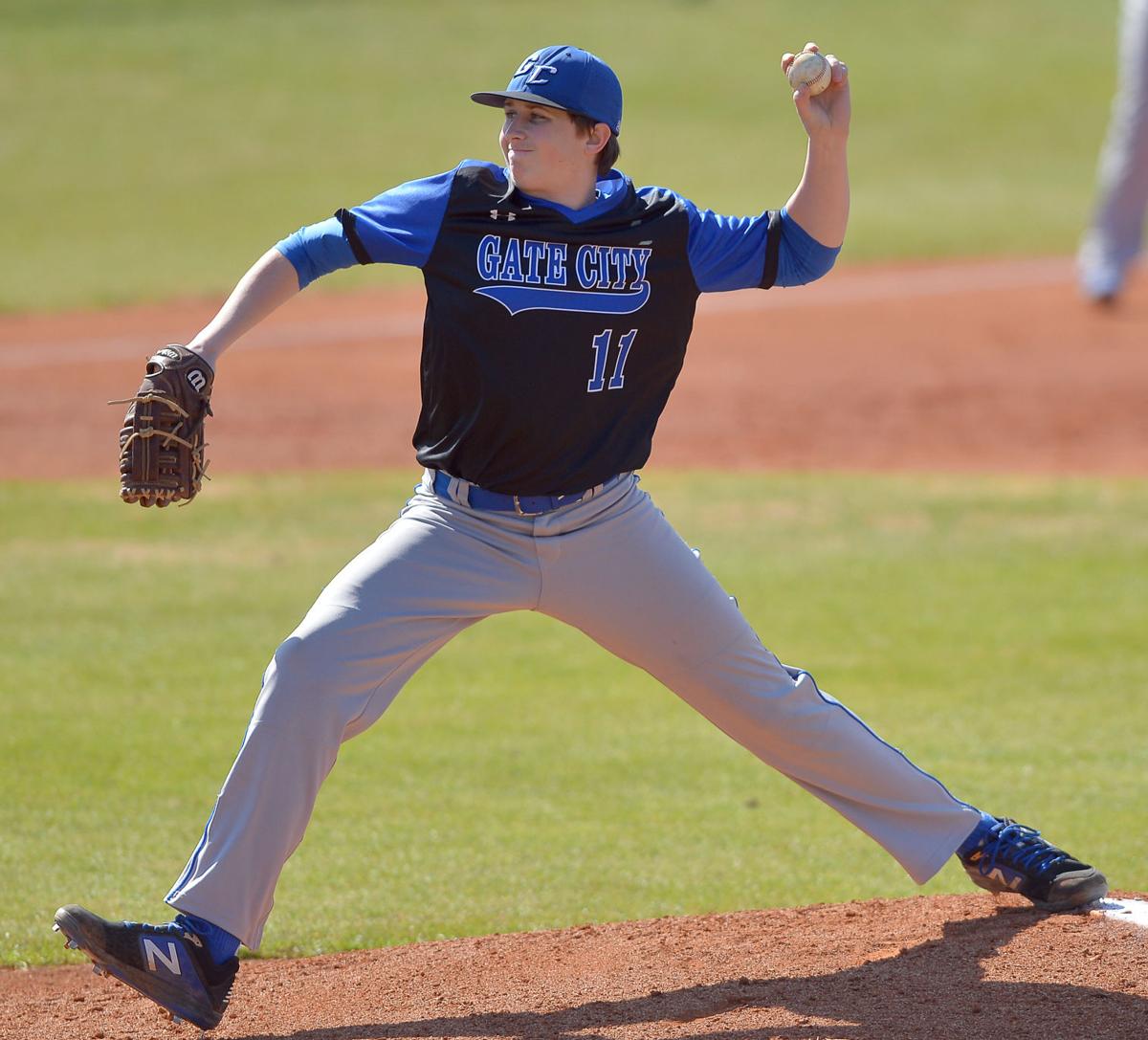 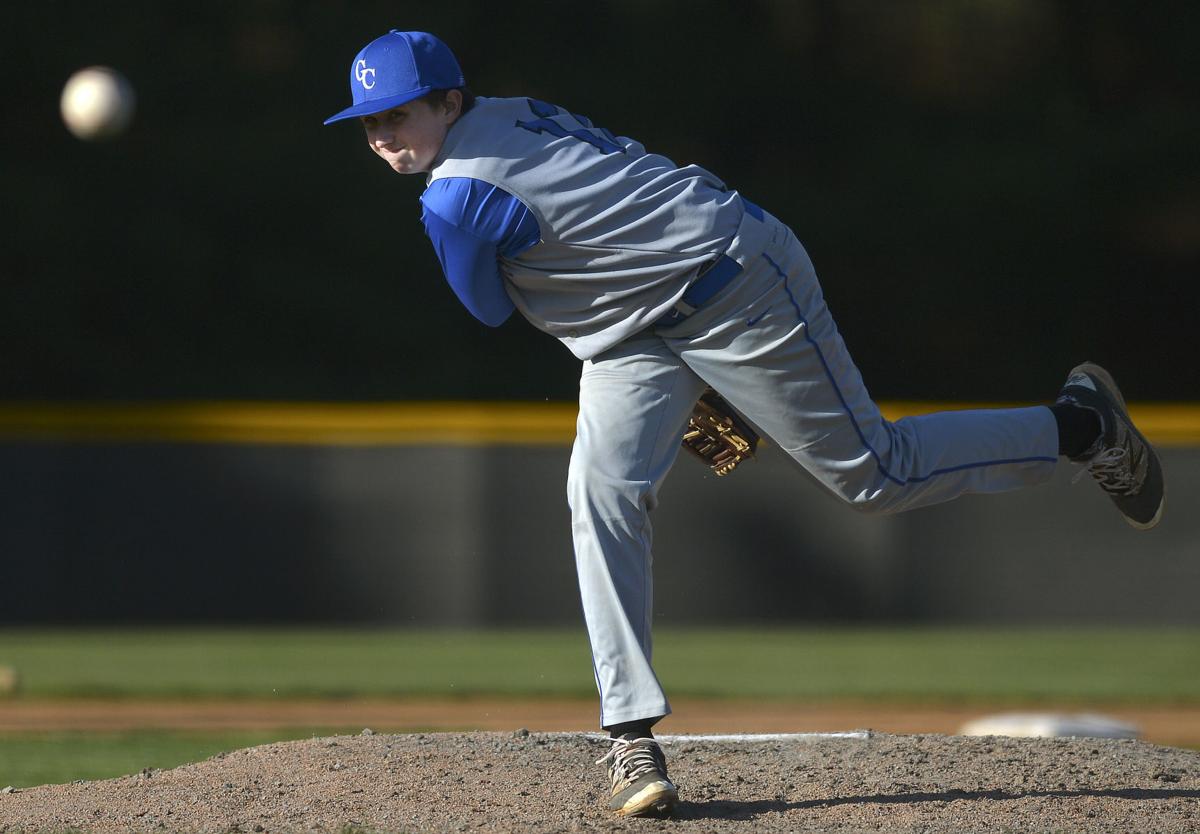 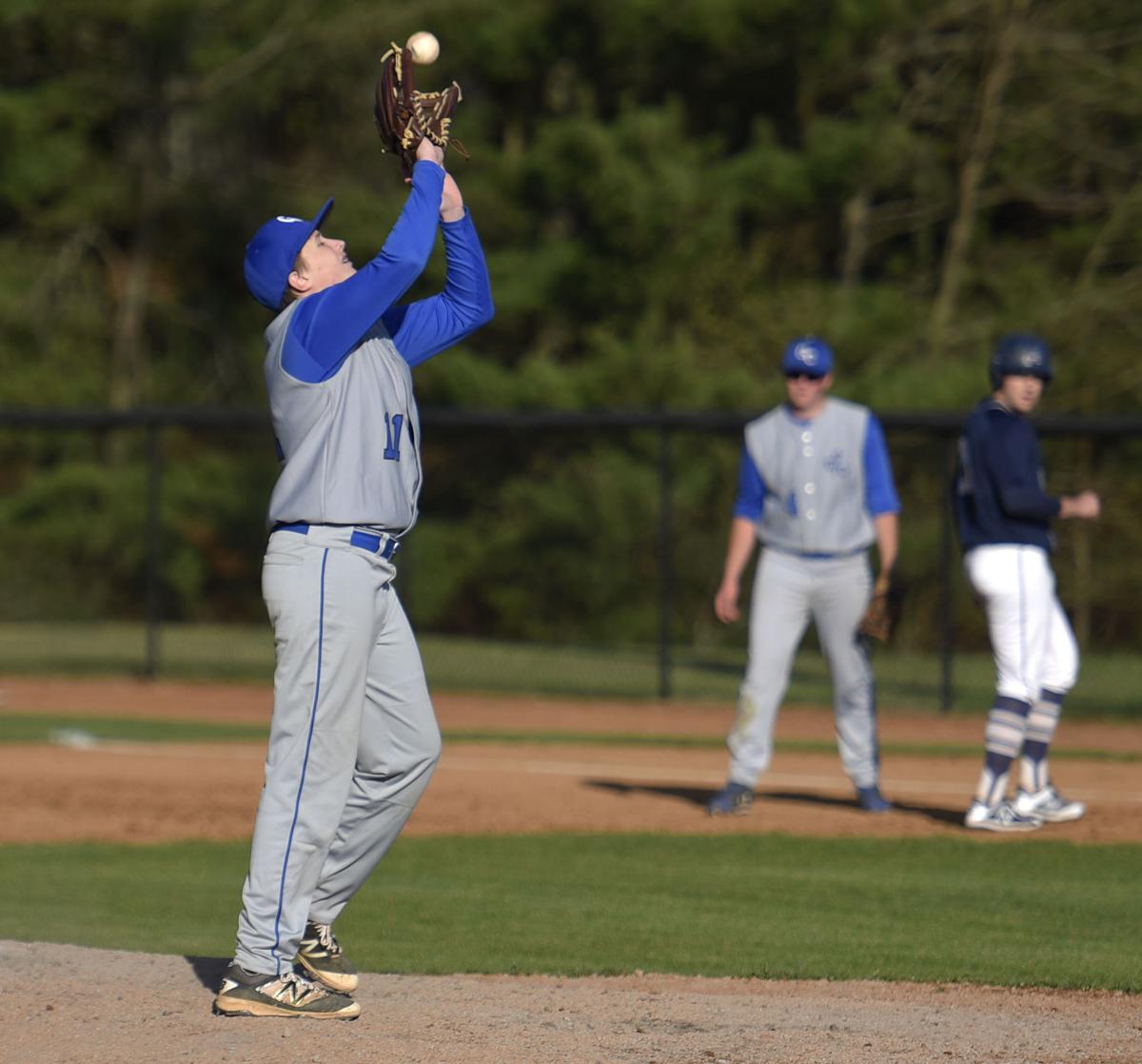 Gate City's Mason Barnett picks up the infield out vs. Abingdon on April 17, 2018.

You could say the story of Mason Barnett’s senior year at Gate City High School featured both a happy ending and a sad conclusion.

The joyful moment came in March when the confident 6-foot-2 left-handed pitcher stood on the mound at Grogan Park in a scrimmage against the Twin Springs Titans and registered a couple of strikeouts over the course of three scoreless innings.

It was just such a scenario Barnett had envisioned in the preceding precarious months of physical therapy, pushing through rigorous rehabilitation as he recovered from Miller Fisher syndrome, a rare nerve disease that can cause extreme dizziness, slurred speech and other painful and persistent symptoms that made it hard to even walk at times without assistance.

Two things kept Barnett going as he endured a CT scan, a spinal tap, a MRI, constant strength exercises and regular doses of uncertainty and fear.

First, there was his faith.

“Even though I couldn’t go to church or my Bible studies, I was still watching online and searching for godly friends to send me some encouragement through God,” Barnett said.

The other motivating factor was the sport he loved.

“Baseball was constantly on my mind,” Barnett said.

Yet, in a cruel twist of fate his courageous comeback was limited to that one preseason outing.

Barnett ended up being left with the same incompleteness that high school seniors across the country felt when the coronavirus (COVID-19) pandemic canceled their spring sports seasons in March and made teenagers miss out on many of the watershed events that come in the final months of the 12th grade.

A story of perseverance and positivity had a bittersweet finish for Barnett.

“To come back from working my butt off harder than I’ve ever seen anyone do, it completely crushed my heart,” Barnett said. “But it’s time to grow up and become the man that this ordeal has made me.

“The emotions through the spring were very dark and gloomy at times, wanting to just throw batting practice, watch [teammate] Jon [Compton] hit the ball over the houses [near] Grogan [Park] and talk to my buddies. I’ve just been helping my grandparents and going to as many church-oriented things because I owe it all to Him. He is the reason I am still here.”

Barnett’s senior year at Gate City was going to be a good one.

He played the snare drum in the marching band.

Yet, three days after school started he came down with a sinus infection.

The dizziness started soon after that.

Fluid behind his ears was discovered on Aug. 20 in a visit to urgent care.

A day later, he began having slurred speech.

“We were concerned when he became dizzy and unable to walk straight,” said Marsha Lane Barnett, Mason’s mother. “However, when he started to slur his words and was not able to do a simple addition problem, we then became scared. After that, he started getting worse. We knew then we had to find some answers.”

A battery of tests followed.

“It was tough. The constant calls to get into another doctor’s office and see more people to try to figure out what was wrong with my body,” Mason Barnett said. “I’ve always hated having to see new doctors and this past year I’ve seen more doctors than most people will see in 10 years.”

He was eventually diagnosed with mononucleosis, but his condition would worsen.

According to most medical definitions, Miller Fisher syndrome includes abnormal muscle coordination, paralysis of the eye muscles and absence of the tendon reflexes.

It is similar to Guillain-Barré syndrome and on average affects only one person in every 100,000.

“In my case it was the mono that attacked my nerve system,” Barnett said. “Making it a thousand times harder to conquer compared to normal mono. … This syndrome attacks your nerves and muscles until virtually there is nothing of them left. I think I lost about 30 pounds within a month and a half during this. It starts from your head down, so the week before I started to stumble and couldn’t walk. I was dizzy all the time and felt like I couldn’t get out of it.”

When he began to feel better and make some progress, the physical therapy started.

“The awful hand-eye coordination and balancing drills were the most aggravating things I’ve put myself up to,” Barnett said. “I went from playing baseball a month and a half before that to not being able to stand by myself.”

There were some tough moments when doubt did creep in.

“After about a month of therapy, it seemed like he hit a little roadblock,” Marsha Lane Barnett said. “His therapist, Marshall McMurray, saw he was getting frustrated and figured out what motivated Mason. So he started incorporating competition and baseball drills. That really worked.”

“It was very inspiring to see someone progress as quickly as he did,” McMurray said. “To go from barely being able to walk to the things that he was able to do toward the end of his treatments was amazing.”

Along with doctors like McMurray, Bryan Arnette and Christopher Pendola, Barnett’s teammates and coaches at Gate City were also there for him to lean on for support.

“We always try and play some in the fall and his mom messaged me and told me what had happened. He was able to come to a few fall games and sit in the dugout, which was good,” said Gate City baseball coach Jonathon Salyer.

Watching his friends play only motivated him more.

“I started seeing the most improvement around November and it kickstarted my faith back up,” Barnett said. “I was like ‘I can actually play baseball this year.’ ”

He returned to school on Nov. 25 and by January he was playing catch once again.

The winter also provided Barnett with a memorable moment in another athletic realm.

“One cool thing that happened to Mason this year was he hit a halfcourt shot at one of our basketball games and won a thousand dollars,” Salyer said. “After everything that he had went through it just seemed fitting. One of our assistant coaches actually bought the ticket and told Mason that he could have the ticket and take the shot if that number was pulled. He was so calm during and after the shot. You wouldn’t have known he just won a thousand dollars. That’s just the type of kid that he is.”

There was zip on the two-seam fastball.

The knuckeball was keeping hitters off balance.

A four-seam fastball, curveball and change-up were also in Barnett’s arsenal during that scrimmage.

“It felt like finally all the pieces to the puzzle were back together,” Barnett said. “From having this crazy feeling of not being able to walk to now being on the mound. That scrimmage was the best my arm had felt in years.”

Impressed, Salyer had decided Barnett would start the season-opener for the Blue Devils on March 16.

When not pitching, the senior would play first base.

Barnett attended the VHSL Class 2 state basketball finals in Richmond on March 12 as Gate City’s girls won the championship and the boys finished as runner-up.

A state of emergency was issued by Gov. Ralph Northam that same day and the following afternoon it was announced that the VHSL would suspend sports for two weeks due to the pandemic.

“It was the weirdest feeling day I’ve ever experienced,” Barnett said. “I was in my fourth block class and I hear [Gate City principal Mike Lane] explain what is going on with this dead period of nothing happening and everyone being excited about getting two weeks off. It seemed like it wouldn’t be months of sadness ahead.”

“Mason is a very roll-with-the-punches kind of kid,” said Travis Barnett, his father. “But he was pretty upset that the season was not played, especially with all the work he put into his rehab. We have had the motto of God is able through this whole process, so we just told him that better things are on the way.”

Mason Barnett plans to study electrical engineering at Mountain Empire Community College and will eventually transfer to a four-year school.

“He truly believes everything happens for a reason,” Salyer said. “No matter if we don’t know why at the time.”

Just like a glove and ball, faith and baseball went hand-in-hand for Mason Barnett during a senior season in which he became stronger after facing a life-altering challenge.

Gate City's Mason Barnett picks up the infield out vs. Abingdon on April 17, 2018.