Baylor's Flo Thamba waves to fans as he leaves the court after Baylor defeated Hartford in a college basketball game in the first round of the NCAA tournament at Lucas Oil Stadium in Indianapolis Friday, March 19, 2021, in Indianapolis. 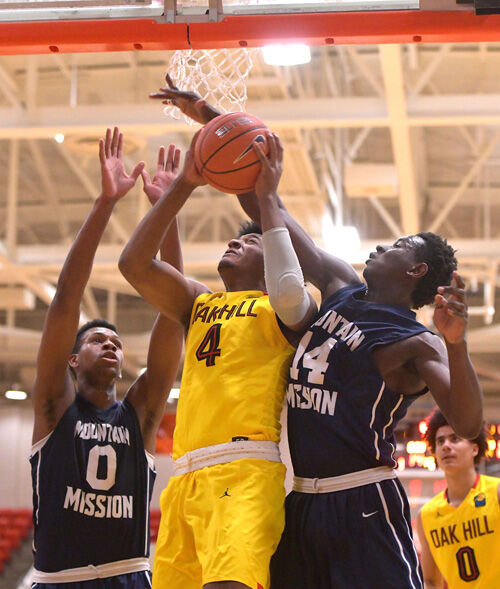 Baylor's Flo Thamba cuts down the net after an Elite 8 game win against Arkansas in the NCAA men's college basketball tournament at Lucas Oil Stadium on Tuesday.

Baylor's Flo Thamba shoots against Oklahoma State during the first half of an NCAA college basketball game in the semifinals of the Big 12 tournament in Kansas City, Mo., Friday, March 12, 2021.

He also remembers the timely assist Thamba provided on a winter day prior to a game in Dayton, Tennessee, a few years ago.

“The smart coach I am gets stuck in the mud in a 15-passenger van,” Wilson said. “Flo leads his teammates out of the van and we’re all trying to push this thing out of the snow and mud. Hilarious moment, even more so since we dressed up for games, so we’re in slacks, dress shoes and polos.”

It was one of the many adventures and memories Thamba made during his three seasons at Mountain Mission.

“Those were some good times back then,” Thamba said on Tuesday in a telephone interview.

The present is pretty splendid for Thamba too and he will be in the starting lineup for the Baylor Bears (26-2) today at 5:14 p.m. when they play the Houston Cougars (28-3) in the semifinals of the NCAA Division I men’s basketball tournament at Lucas Oil Stadium in Indianapolis.

“I’m so excited for the opportunity he’s earned to be in the Final Four,” said Jared Miller, who coached and worked at Mountain Mission during Thamba’s time there. “Incredible to think that a player of ours from Mountain Mission will be jumping center in a national semifinal game and then hopefully, in a national championship game.”

A 6-foot-10, 245-pound junior, Thamba is averaging 3.6 points and 3.9 rebounds per game for head coach Scott Drew’s club and might lead the nation in miles traveled to end up at the school in Waco, Texas.

Thamba was born in the Democratic Republic of the Congo and lived in England, France and South Africa, before arriving to Southwest Virginia at the age of 16.

He had heard of Mountain Mission from Bismack Biyombo, the NBA center who is also from the Congo and whose brothers had played there. Thamba’s father, Emmanuel, wanted his children to get a good education and Mountain Mission seemed like the perfect fit.

Thamba quickly took to his temporary home in the coalfields, flourishing at the tiny, private boarding school that houses students from all over the globe.

“It was a family environment,” Thamba said. “It was a small town, so there was not very much to do, so I just focused on school and focused on basketball and we all worked on our craft. It really prepares you for whatever comes afterward.”

What was a young Flo Thamba like after arriving in Buchanan County in October 2015?

“Mature, caring and considerate,” Wilson said. “Flo was guarded and you had to earn his trust. Character and integrity were my first impressions of him and he was also a big brother to his teammates.”

He had only begun playing basketball a few years earlier and his game improved by leaps and bounds as he bloomed into a DI prospect. The guy who speaks three languages became a big man on campus and not just because he towered over most of his classmates.

“Spirit week is the biggest and best in the world at Mountain Mission School,” Miller said. “It leads into our home tournament, the Sportsmen for Christ. One thing I’ll always remember with Flo is how he and Daniil Kasatkin came alive alongside their classmates throughout the week. Leading, getting in costume, face painting … They were fantastic that year and while at times our international students would shy away a bit, Flo jumped right in and was very impressive.”

Some folks might remember the Thamba-led Mountain Mission Challengers playing against the Oak Hill Academy Warriors from Mouth of Wilson, Virginia, in highly-competitive games played in Saltville and Bristol.

Kenneth Nwuba is a redshirt sophomore for the UCLA Bruins – who face unbeaten Gonzaga in the other semifinal – and spent two seasons at Oak Hill, the perennial powerhouse.

Illinois, Virginia Tech and Nebraska were among the schools in the mix for Thamba’s services by the time his final season arrived at Mountain Mission.

“Mountain Mission helps you grow on and off the court and make better life decisions,” Thamba said.

The decision to attend Baylor has been a boon for Thamba and he’s two wins away from the big prize. The big man from Mountain Mission is making more memories in March Madness for a Big 12 Conference team that has impressed all season.

“We are basically a bunch of guys who come from different backgrounds,” Thamba said. “We are all guys who never had anything handed to us and we had to work for the opportunities. We’ve all came together for a common goal.”

Baylor's Flo Thamba waves to fans as he leaves the court after Baylor defeated Hartford in a college basketball game in the first round of the NCAA tournament at Lucas Oil Stadium in Indianapolis Friday, March 19, 2021, in Indianapolis.

Baylor's Flo Thamba cuts down the net after an Elite 8 game win against Arkansas in the NCAA men's college basketball tournament at Lucas Oil Stadium on Tuesday.

Baylor's Flo Thamba shoots against Oklahoma State during the first half of an NCAA college basketball game in the semifinals of the Big 12 tournament in Kansas City, Mo., Friday, March 12, 2021.