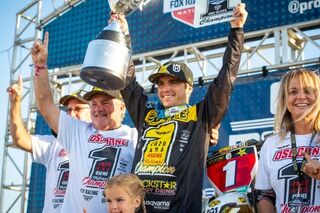 Zach Osborne is a champion. 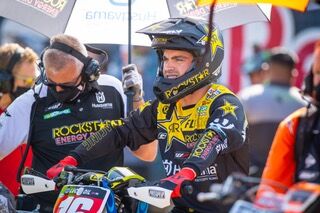 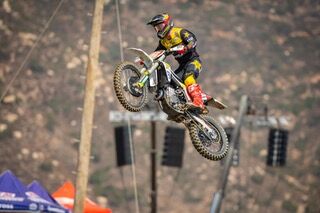 Abingdon native Zach Osborne reached that goal last Saturday, and he did it the hard way.

Overcoming a February practice crash that resulted in a broken back among other injuries, the 31-year-old Osborne entered last Saturday’s 2020 season finale in Pala, California, with a 24-point lead in the premier 450 class.

“It was a nervous time, for sure. There are a million things that could have gone wrong,” said Osborne in a Wednesday phone interview from his home in Clermont, Florida.

With another grueling day of consistent riding, Osborne clinched the big prize in California with a 12-point margin over Florida’s Adam Cianciarulo. Three-time defending national champion Eli Tomac finished 34 points back in third.

“For all of last week, it seemed like the hours passed like days,” Osborne said. “Having a gap in points made things a little less stressful. The key on Saturday was getting two good starts, keeping my nose clean early in the races, and then just kind of riding it out.”

In a sport often ruled by teams and riders from the West Coast, Osborne broke all sorts of barriers in 2020.

In addition to giving Husqvarna its first 450 class crown in the United States, Osborne became the older rider to ever win a championship in the elite class.

“It’s been an awesome week,” Osborne said. “After we fulfilled some obligations, we hung out in Huntington Beach for a couple days and just had a really nice time.”

Osborne competes for the powerful Rockstar Energy Husqvarna Factory Racing Team and trains with the famed Aldon Baker. But Zach said the most integral part of Team Osborne is his wife, Brittney.

“It’s incredible to have a partner that shares the same commitment to the sport that I have,” Zach said. “Brittney has been right there with me throughout my career and she’s always been supportive of my decisions.”

According to Zach, the painful path to the 2020 title added to the satisfaction. He offered some insight into his crash and the ordeal of recovery.

“It was a tough time,” Osborne said. “I was originally misdiagnosed with just one broken rib and two partially collapsed lungs.”

“I’ve broken plenty of ribs in my career, and this didn’t feel the same” Osborne said. “I kind of suffered for nearly two weeks before I went back to the doctor.”

This time, the diagnosis became was much different. Along with the two partially collapsed lungs and a broken rib, Osborne had broken five vertebrae and a wrist.

“It’s super rewarding to know that I came through the challenges I’ve faced to make this championship happen,” Osborne said. “Of course, it would have been easier if I had a crystal ball to see how things were going to turn out in the end. But I just keep working toward my goal.”

The bizarre 2020 season included a three month halt to the Monster Energy AMA Supercross season due to COVID-19. Action finally resumed on May 31 with a seven-event run before no spectators at the University of Utah’s Rice-Eccles Stadium in Salt Lake City.

“That stoppage was actually a blessing for me because it allowed me to finish out the Supercross season,” Osborne said. “The Salt Lake City program also benefited me because of the way my body operates. The three-day recovery period between races was tight for most guys, but I was able to get some really good results.”

A signature victory in the season-ending Supercross event in Utah propelled Osborne into his outdoor campaign.

“A broken back is a tough injury to return from, but I’m thankful that my body heals really quickly,” Osborne said. “The pain eventually went away.”

Osborne credited Baker for setting the stage for his comeback.

“Aldon has been instrumental to my career over the last three or four years,” Osborne said. “Aldon has always had success but he hadn’t dealt with lot of injuries with his riders.

“This season was our first big injury together. Aldon was in the trenches with me through all that, so I think it was rewarding for him to see me come out on the other side and win the championship.”

There was nothing cheap about Osborne’s run to glory. He led the series with four overall wins and six podium finishes en route to becoming just the 12th rider to win the 250 and 450 championships.

Osborne said the uncertainties surrounding the pandemic played a part in his aggressive approach.

“I knew it would be important to attack from day one, earn some points and try to create a gap because nobody was sure how long the series would go or how far we would make it,” Osborne said.

While Osborne has long been among the most upbeat personalities on the colorful motocross stage, life has changed dramatically for Osborne in one way. After once being included among the sport young’s phenoms, Osborne is now considered a grizzled veteran at 31.

What’s next for the former king of Muddy Creek Raceway in Blountville, Tennessee?

“I have another year left on my contract with Husqvarna, and we’re in negotiations for another year. That would take me through 2022,” Osborne said.

For now, Osborne just wants to enjoy his view from the top.

“The ability to lean on my faith and my family was probably the biggest key to the season,” Osborne said. “Being around people who enjoy the sport as much as you do is invaluable, and that kind of support keeps you coming back for more.”

Osborne said he said still considers Abingdon as his home and hopes to visit soon. But his immediate agenda include a beach trip to recharge and reflect.

“The championship is still sinking in, and it’s an awesome feeling,” Osborne said.

“David was a true Bill Dooley-type player,” said Bobby Trott, a teammate of Barrett’s at UNC “He was a team player and a tough, hard-nosed guy.”

Rainey, who was known as “Raindrop” during a stellar football career at Tazewell High School, is one of four men who will be honored for breaking the color barrier on the University of Virginia football team in 1971.

“I hadn’t had the best night kicking, and I think we all knew that,” said Gouge, who added that he couldn’t let his team down after Prince Kollie and company had given him an opportunity. “I was just trying to stay calm.”

TSSAA FOOTBALL: Keller vs. Kollie one of many storylines in first-place showdown between Tennessee High and David Crockett

“It’s special to be able to watch one guy with as much talent as those two, let alone two,” said Crockett coach Hayden Chandley said. “Both are special talents and from what I’ve heard about Keller, both are outstanding young men as well and good leaders for their teams. We will have our hands full trying to keep up with where Keller’s at and making sure we get a hat or two on him when we have the football.

Sullivan Central, Tennessee High and Sullivan East all in action this weekend.

“I just try to do whatever they ask me and whatever is going to give us the best chance to win,” Mitchell said on Tuesday.

Zach Osborne is a champion.