MLB: Ed Goodson made his debut with Giants on Sept. 5, 1970
0 comments
Share this
Return to homepage × 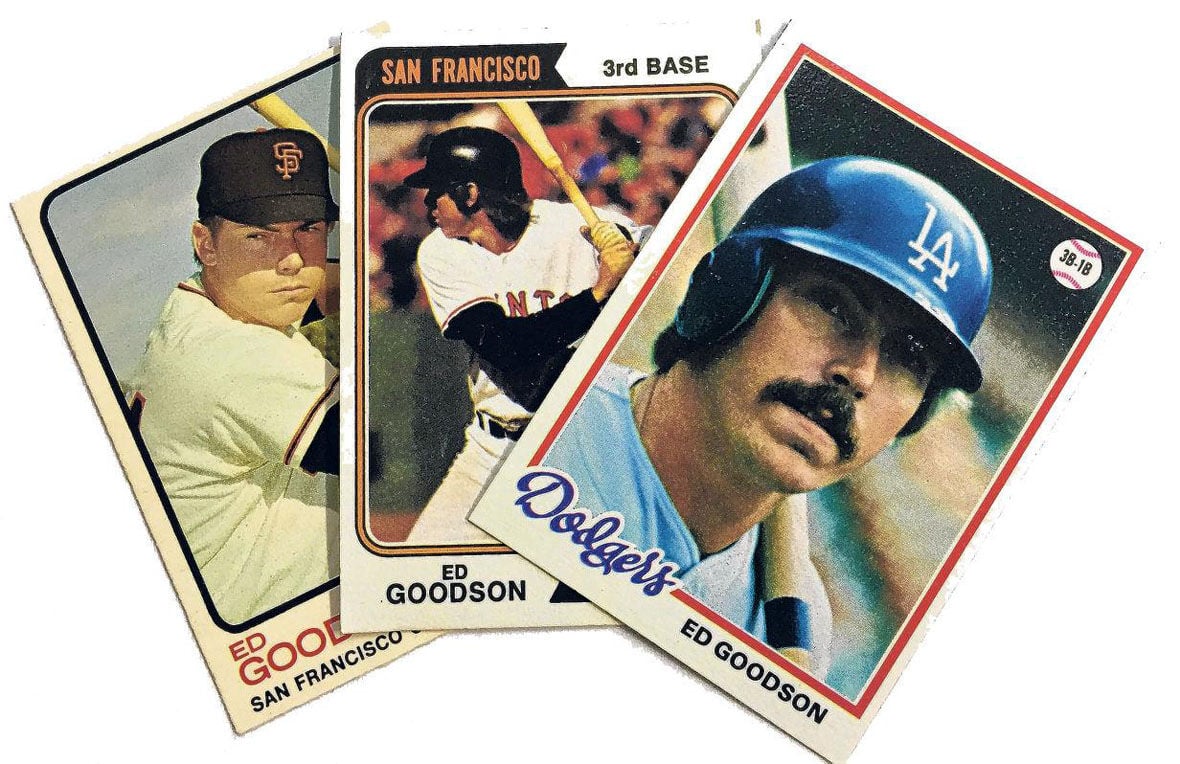 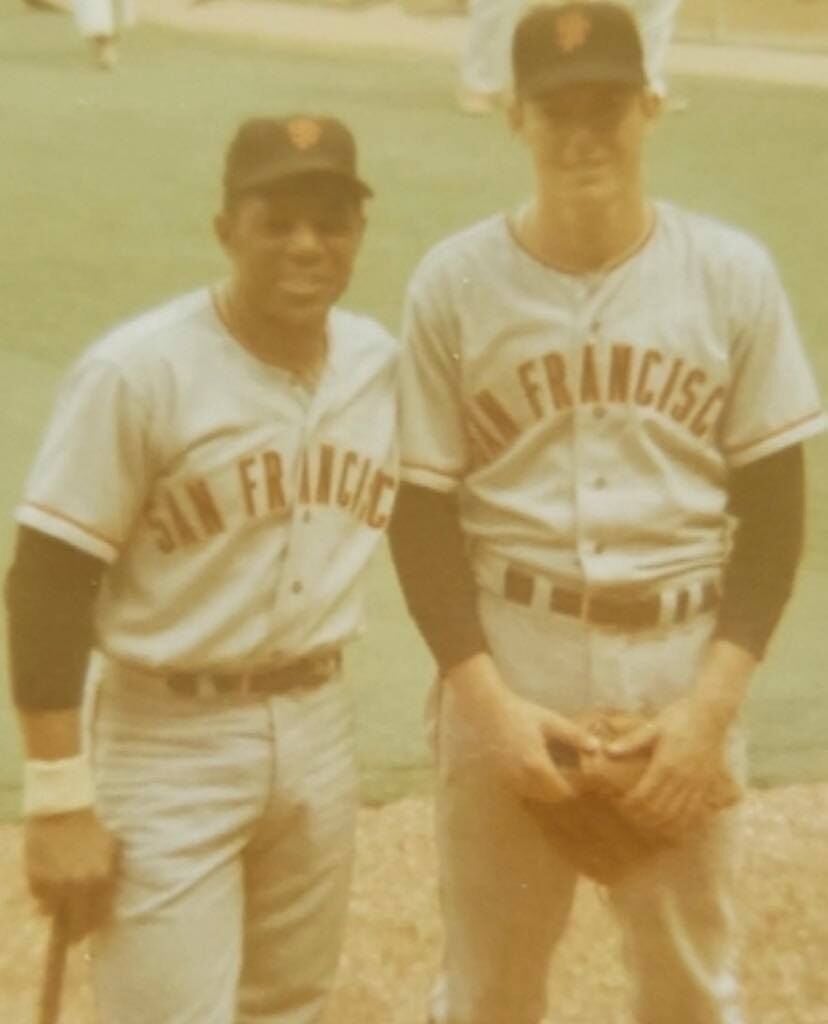 Andre Thornton of the Chicago Cubs dives back to first base safely as Atlanta’s Ed Goodson awaits the pickoff throw from pitcher Phil Niekro on Sept. 1, 1975.

Ed Goodson stepped out of the taxicab and with suitcase and equipment bag in tow made the short walk down a hallway in the bowels of Atlanta Fulton County Stadium on Sept. 5, 1970.

The team he was about to join – the San Francisco Giants – had just dropped a 5-2 decision to the Atlanta Braves in the first game of a doubleheader and Goodson arrived at the entranceway marked with bold letters that read “Visitor’s Clubhouse.”

His knock on the locked doors was answered by an equipment manager who curtly asked, “Are you Ed Goodson?”

“Just a minute,” the employee replied before shutting the door in Goodson’s face.

“I was standing there thinking,” Goodson said last week in a telephone interview from his home in Galax, Virginia. “What in the world’s going on here?”

Life was indeed a whirlwind for the 22-year-old slugger who less than 24 hours earlier had been in Reno, Nevada, playing in what he figured was his final game of the season for the Fresno Giants of the Class A California League.

He had a big night in the place known as the “Biggest Little City in the World” and capped his third season in the minors with a .314 batting average, 19 home runs and 94 RBIs.

“I was in a good mood after the game and our manager, Denny Sommers, called me into his office,” Goodson said. “In A-ball when that happened, it usually meant a pink slip. Here I am thinking I am getting released.

“I went in there and the first thing I said was, ‘Denny, how can I get released with the year I’ve had?’ ” Goodson said. “He started laughing and I was a little scared. He told me, ‘You’re not getting released, you’re going to the Big Show. You fly out in the morning. Here’s your ticket.’ It’s hard to explain the feeling. It’s something that you’ve always dreamed about – playing in the big leagues – and it’s going to become a reality.”

His wife, Brenda, was the first person he contacted back home in Virginia, followed by calls to his parents and grandfather. After a restless night of sleep, he boarded a plane for Atlanta and now here he stood waiting to cross the threshold into a big-league clubhouse for the first time.

A few moments passed when the door opened again.

“It’s Willie Mays,” Goodson said. “And he said, ‘Ed, C’mon in man, we’ve been waiting for you.’ He grabs one of the bags and says ‘Follow me,’ and I followed him and he sets the bag down inside a locker, which happens to be right beside his locker. Here I am in another world, thinking this can’t be true.”

Goodson had once pretended he was Mays, Mickey Mantle, Ted Williams and other superstars of his youth while hitting railroad cinders with a bat on the tracks near his home in tiny Ivanhoe, Virginia.

He’d kept hitting at Fries High School and posted batting averages of .588, .585 and .591 over his final three prep seasons with a sweet swing.

He earned second-team All-American honors as a sophomore at East Tennessee State University and was selected by the Giants in the secondary phase of Major League Baseball’s June Amateur Draft.

Now, he was in a clubhouse featuring four future Hall of Famers in Mays (who Goodson said is “one of the finest human beings you could ever meet”), Willie McCovey, Gaylord Perry and Juan Marichal.

“A lot of the guys came over and were congratulating me and I was just in awe,” Goodson said. “Charlie Fox, the manager, comes over and welcomes me there. He then said, ‘You better get your stuff on, you’re starting the next game.’ I said, ‘What?’ and I started putting my uniform on and I’m about ready, look around and everybody’s out of the locker room and back on the field.

“There was this long runway from the clubhouse to the dugout and I’m running down there, just flying, thinking I am going to be late. I ran up the steps and the last one before you get to the field, I hooked my right toe on the top step and rolled out onto the field. I opened my eyes and I’m just kind of on my back with all these fans there. I get back up and look around and everybody in the dugout is just cracking up, going crazy laughing.”

Starting at first base and batting seventh, Goodson recorded two putouts in the first inning and then stepped to the plate for the first time with two outs in the top of the second inning against Atlanta left-hander Mike McQueen.

“But as I was going back to the dugout, I was telling myself, ‘Man, I can hit that. I can hit that.’ It was in my mind that it wasn’t anything I hadn’t seen before.”

That hit came in the top of the fifth inning as he lined a single to right field for his first big-league knock. He would score his first MLB run a couple of batters later as Bobby Bonds bashed a two-run homer in a game the Giants eventually lost.

It was the start of an eight-season career at the game’s top level for Goodson as he finished with a .260 batting average, 30 home runs and 170 RBIs over the course of 515 regular-season games with the Giants, Braves and Los Angeles Dodgers.

“Goody was a good fastball hitter with power,” said Tommy John, who faced Goodson as an opponent and was a teammate of his in Los Angeles. “He was a very good player and a good guy in the clubhouse too. A funny guy. MLB needs more Ed Goodsons.”

Goodson has vivid memories of his last official MLB at-bat as well and rightfully so since it occurred in Game 6 of the 1977 World Series at Yankee Stadium.

In a game that became iconic because of Reggie Jackson’s three-homer performance, Goodson strode to the plate in the top of the seventh inning to pinch-hit for Dodgers relief pitcher Doug Rau.

“In batting practice I had scorched some balls into the upper deck at Yankee Stadium and was hoping to get a chance,” Goodson said. “[Third baseman Ron] Cey and [first baseman Steve] Garvey never did take days off, so my job that year was as a pinch-hitter. So the opportunity comes and [manager Tommy Lasorda] tells me to get in there and hit.”

Catcher Thurman Munson of the Yankees and Goodson exchanged a couple of congenial words, prompting ABC’s Howard Cosell to ask his partners in the booth, Keith Jackson and Tom Seaver, “Was Goodson smiling or grimacing?”

“I step in the box and Thurman Munson says, ‘Ed Goodson, I’ve heard a lot about you. You have some pretty good power.’ I’m getting ready to hit and I step out of the box and look at him,” Goodson said. “He then said, ‘Here’s what we’re gonna do. I’m going to tell [pitcher Mike Torrez] to give you a fastball right down the middle belt-high and you have to make a decision. I know you have the take sign, so you can either take or you can swing.’

“I just started laughing and thinking, ‘What the crap is this guy doing?’ Here it comes, my one chance and of course I’ve got the take sign and it was a fastball belt-high right down the middle for a strike. Ol’ Thurman says, ‘That was it. You’re on your own now big boy.’ I ended up striking out and I always think about what if I would have just gone ahead and swung and took my chances. I should’ve done it. But that was what that little bit of grinning and laughing was about.”

Goodson grinned and laughed again when reminded that it has been 50 years since that day he arrived in Atlanta for his MLB debut and was greeted by none other than Willie Mays.

Sullivan South played Tennessee High during all four seasons of Michael McMeans’ tenure with the Rebels, and he liked what he saw from the Vikings.

WATCH NOW: GREGORY COLUMN: NASCAR's All-Star race may not be at BMS next season

The season of speed at Bristol Motor Speedway continues this weekend with the U.S. Short Track Nationals but it appears the 2021 docket will have a different look.

Andre Thornton of the Chicago Cubs dives back to first base safely as Atlanta’s Ed Goodson awaits the pickoff throw from pitcher Phil Niekro on Sept. 1, 1975.