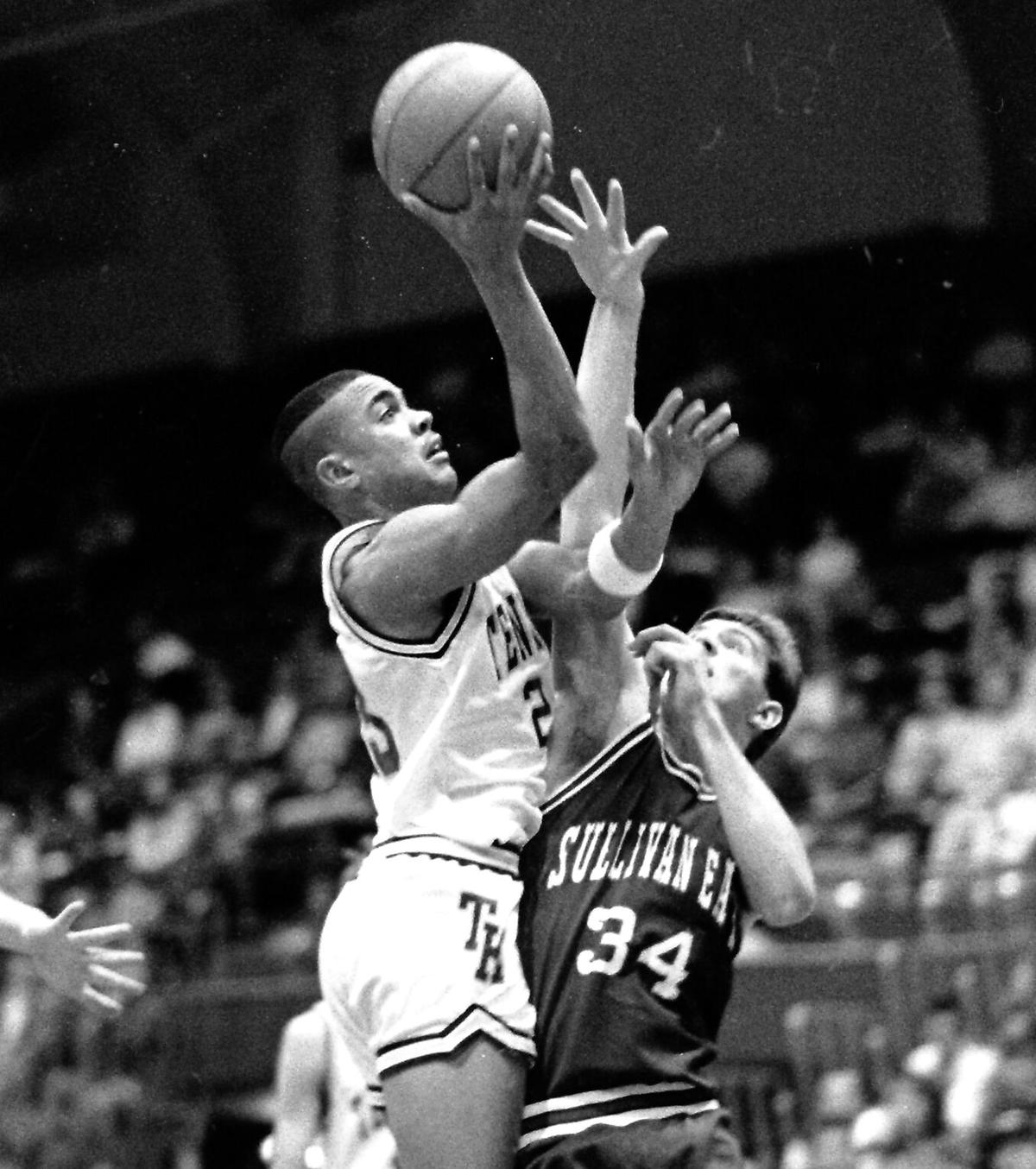 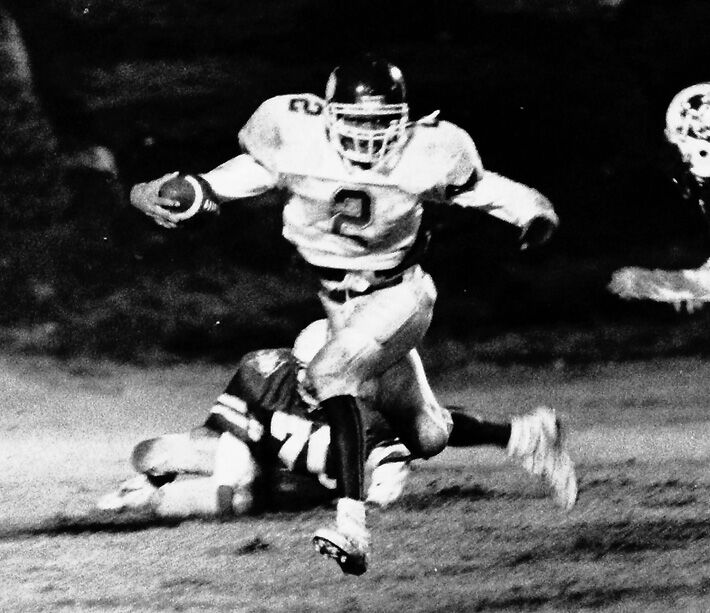 Near the end of 1991, the most popular song blaring out of cassette deck speakers and Walkman headphones was M.C. Hammer’s “2 Legit 2 Quit.”

In the months prior to the release of that catchy tune, a guy from Bristol who everybody knew as “Two” was one of Northeast Tennessee’s most legit athletes and never quit making plays.

How good was Gary “Two” Morton’s senior season for the Tennessee High Vikings?

Well, he gained 1,365 rushing yards and scored 26 touchdowns on the gridiron in the fall of 1990 as the Vikings went 10-2 and posted their first playoff victory in 18 years.

That winter, he averaged 18.1 points and 10.0 rebounds per game on the hardwood and was the first THS athlete to rush for more than 1,000 yards in a football season and score more than 1,000 career points in basketball.

Morton excelled at the jumps and sprints in track and field as well.

He also had plenty of colleges vying for his services and eventually signed to play basketball with the Wofford College Terriers.

“I remember they played Sullivan North in football his senior year and I was up in the press box talking to some North coaches and they ask me, ‘How good is he?’ I said, if he sees that pylon before your guys do, he’s going to score and you won’t touch him,” said Dale Burns, Morton’s basketball coach at Tennessee High. “Later in the game, he took a handoff and was gone, outran everybody. He was just a heck of an athlete.”

It’s been 30 years since Morton’s senior year at Tennessee High and opinions among his former teammates vary in regard to what was his best sport.

“You know, I still can’t answer that one,” Morton said. “I really liked all three pretty much the same, but football was my best sport.”

“Very strong runner and didn’t shy away from contact,” Hutton said. “He would run over you if he could.”

“I think basketball was probably his best sport, but he was always great at anything he played,” Gossett said. “What impressed most folks about Gary probably was his passion. He always gave 110 percent when he played and that’s what makes winners.”

Morton’s winning ways dated back to his youth and he was on a baseball team from Bristol that qualified for the Junior League World Series in 1987.

“We played for Avoca and we were in Altamonte Springs, Florida, for the regionals,” said Chris Phipps, an ace pitcher and football standout at Tennessee High. “He was on first base leading off. The pitcher threw to first to hold Two on, but he wasn’t there. He took off for second and in what seemed like four strides he was there and beat the throw from the first baseman. Fast.”

Morton was a natural.

“To be honest, baseball may have been his best sport at an early age,” Hutton said. “He was just a fierce competitor who hated to lose. We traveled the country together in 1987 for two months on our journey to the Junior League World Series and it didn’t matter what we were up to during this time – cards, Atari, pickup games – he hated to be second.”

Two was second to none during that 1990 season as the Vikings had a season to remember.

Injuries had hampered Morton during his first two prep seasons on the gridiron and he had mainly played special teams as a junior.

He burst on the scene as a senior, however, saving the best for last.

“His speed and vision was impressive,” Phipps said. “I never saw anyone catch him from behind. He could see the field so well. I loved watching him run the ball.”

His finest moment came in a first-round playoff game at Greeneville.

Trailing 14-3 in the third quarter, Morton took a screen pass from Wally Proffitt 49 yards to the house to get Tennessee High going. The Vikings eventually forced overtime.

THS coach Tommy Hundley opted to begin the extra session on offense after winning the coin toss and Morton went straight up the gut, racing 10 yards to the end zone to give the Vikings the lead.

Greeneville’s ensuing possession ended when running back Brigham Lyons was stuffed on fourth down from the 1-yard line as Brandon Ware led a surge of THS defenders.

“I remember celebrating with my teammates after that play,” Morton said.

The season would end with a 20-10 loss to Oak Ridge (which won the state title the following season), but Morton gained 112 yards and scored a touchdown against the Wildcats.

As for hoops, what moments stood out the most for Morton?

“The Arby’s Classic games were my favorite in high school,” Morton said. “Because back then that was really the only time you got to play teams from other states.”

With a quick first step, Morton continually beat defenders off the dribble on his way to the basket. He once scored 35 points in a victory over Virginia High.

“Two was a great defender because of his strength and quickness,” said former Sullivan Central star Jared Harrison. “He was hard to guard when he got to the paint. He really knew how to use his body to be good on both ends of the floor.”

Morton originally intended to attend Tennessee Tech and play both basketball and football for the Golden Eagles, but eventually decided on Wofford. The Terriers were a NCAA Division II program at the time.

“I chose Wofford because of the academics and the basketball program was really strong,” Morton said. “Also, Buddy Saunders, a former Tennessee High player, had went there and highly recommended it. Plus, the coach who recruited me at Wofford was really good.”

Yep, the same guy who later turned Wofford into a nationally-renowned program and is in his second season as the head coach of the Virginia Tech Hokies.

Morton averaged 9.8 points, 2.4 rebounds, 1.8 assists and 1.3 steals per game over the course of 89 career games with the Terriers. He was joined in Spartanburg, South Carolina, by high school teammate Joey Malone.

“My time at Wofford was awesome,” Morton said. “We had a lot of good teams and made it to the NCAA [Division II] tournament my junior year. It was cool playing with Joey and it was really neat, because we have played sports together since we were like 9-years-old playing All-Stars together.”

Morton’s first collegiate game actually occurred against East Tennessee State University at the Mini-Dome in Johnson City. The Buccaneers beat Arizona a few months later in the first round of the NCAA national tournament with Calvin Talford (Castlewood) and Trazel Silvers (Ervinton) leading the way.

He competed against ETSU all four years of his collegiate career and went for 21 points as a senior against the Southern Conference squad in Johnson City.

Wofford also played a game at Viking Hall in 1994 against the King College Tornado as Morton and Malone led the Terriers to an 86-75 win in their homecoming.

Married with three children, Morton currently resides in Knoxville, Tennessee, where he works as a manufacturing rep for Bailey Hydraulics.

As for that memorable nickname?

It came from his father and namesake, Gary, who was a standout athlete at Tennessee High himself. Since he was in the fourth grade, most everybody knew him as Two.

“I was given the name Two at birth, because I am a second,” Two Morton said. “My dad does not like the name Junior, so he went with Gary Michael Morton II.”

Gary Michael Morton II certainly made a name for himself at Tennessee High.

Now, for a look at high school basketball moments which occurred this week in history:

Wise County Central is the popular choice to win the Mountain 7 District football championship during the 2021 "spring" football season. Abingdon is second in the preseason coaches poll.

Isaiah Boyd opened the football season in a big way.

These two teams engaged in one of the most entertaining games of 2019 as Honaker won in double overtime to clinch the Black Diamond District title. … Honaker is 0-2 and has scored just six points, while Hurley is 1-1 and was blanked by Eastside, 15-0, last Saturday.

HISTORY WITH HAYES: Council, Twin Springs had a game to remember in 1996

The brief respite for the sweat-soaked, emotionally-spent, running-on-fumes teams and the raucous raw-voiced spectators was over as the horn sounded inside the gym at Thomas Walker High School – the coaches offering instruction and encouragement as the huddle broke – 10 tired teenagers trudging back on the court for the third overtime of a win-or-go-home game in the semifinals of the VHSL Region D boys basketball tournament.