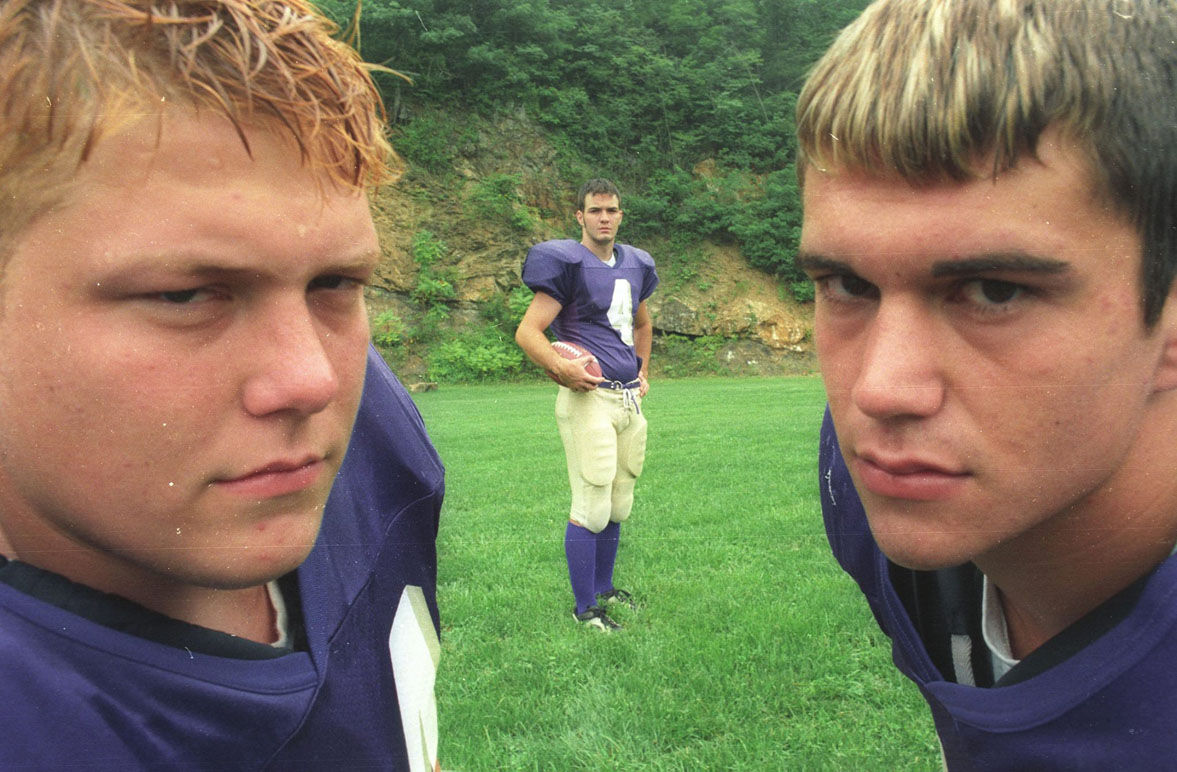 Daniel Davis (center), Jonathan Kirk (right) and John Baker pose for the camera prior to the 2001 season. 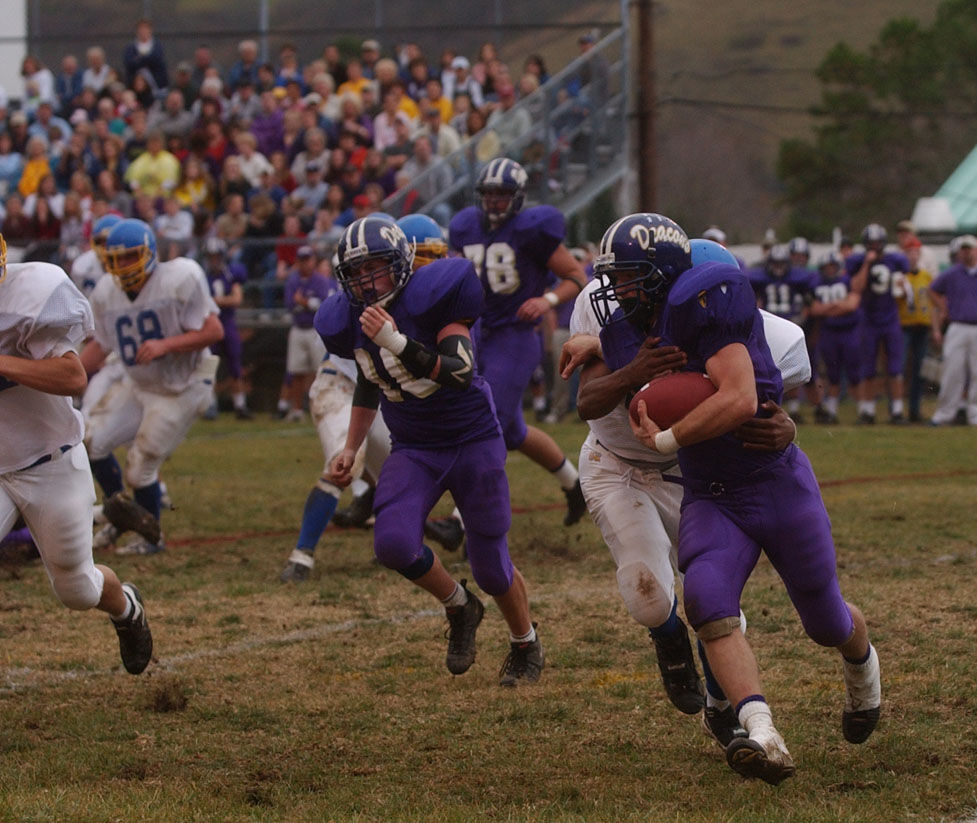 Daniel Davis makes gospel music these days and is working on his first solo album after a 12-year run strumming the guitar and providing vocals for the popular band Folk Soul Revival.

Seth Padgett serves as the head football coach at Patrick Henry High School and the Rebels just concluded a season in which they went 9-4 and finished as VHSL Region 1D runner-up.

Ben Thompson is in his third season as the men’s basketball coach at Emory & Henry College and his Wasps are off to a 5-2 start as they make the transition to the NCAA Division II level.

Jonathan Kirk gets steady work on Saturday afternoons as a college football referee.

It’s been 20 years since that quartet was among the memorable cast of characters comprising the football team at St. Paul High School in Wise County, Virginia.

The 2001 Deacons went 9-3, claimed the Cumberland District championship, won the first (and only) playoff game in program history, finished as Region D, Division 1 runner-up and made memories that remain fond two decades later.

“The biggest thing that comes to mind with that team was just how close we all were,” said Thompson, who was a senior wide receiver. “There wasn’t a lot of drama and we all wanted the best for each other. It was a group that put the team before individual success.”

It was a motivated group too.

Twenty-one of the team’s 22 starters were back in the fold for head coach B.I. Salyers – a former All-American offensive lineman at Emory & Henry College – and the senior class was looking to cap a run in which they had won big at all levels.

“I can remember nay-sayers telling me we wouldn’t win when we got to varsity,” said senior running back Adam Wright. “That everyone won games during JV and Peanut League football. I refused to believe that. I knew that was their negative experiences they were relating to us and I knew we were going to be different.”

Poor weather postponed St. Paul’s season-opener against J.J. Kelly to a Saturday and a couple thousand people showed up at Bowman Field. However, the home team was drubbed 51-18 by the Indians of the Lonesome Pine District.

“The Kelly loss was a hard pill to swallow, but Coach Salyers used that as motivation the rest of the season, so it actually turned into a positive for us,” Padgett said. “Because if we had a bad practice he would always remind us that we could be beaten by anybody.”

St. Paul soon hit its stride, however, and had fun while they were piling up points and winning games.

“We had a very, and I mean very, tight-knit locker room,” Wright said. “We had all played together since fifth grade. We had the best time in the locker room during two-a-day practices. It was very entertaining. I Remember a few WWE wrestling matches and there was our band we called ‘Contagious’ where Daniel played air guitar, Seth played air bass, Jonathan Kirk played the triangle and I jammed on the drums. We played many concerts in that locker room.”

It was a sign of things to come for Davis, the team’s quarterback, as he became a musician.

“With that many strong personalities,” Davis said. “It was always a spectacle in the locker room whether it needed to be or not.”

Davis passed for 100 yards, Padgett made 12 tackles and Hale scored two TDs in a 28-7 win over Rye Cove that essentially sealed the district title and clinched a playoff berth the Deacons.

St. Paul hosted the Twin Valley Panthers – a school that had just opened after being born from the consolidation of Garden and Whitewood – in the first round of the playoffs.

“The night before the game we had a team meal and all the seniors sat together and I can remember talking about how we had to win the game,” Padgett said. “Not just for us, but for the community, because St. Paul had never won a playoff game and we wanted our community to experience that with us. We always had so much support, so we did not want to let them down.”

It’s always special when a small community rallies around the football program and it usually happens every fall in Southwest Virginia and Northeast Tennessee.

“The town was really 100 percent behind us,” Wright said. “They were more excited about the season than we were. I can remember going into Food City to rent a movie and I was stopped by five different people, all talking about football and I was in the store for over an hour just to get a movie rental.”

That season certainly played out like a movie and the seminal moment was that triumph over Twin Valley. Wright scored three touchdowns on the ground and also threw a TD pass to Todd Robinson in a 48-14 win.

“I remember the crowd,” Wright said. “Seeing people pack the stadium was amazing. The atmosphere was electric.”

The season would end the following week with a 64-34 setback to Appalachia in one of the highest-scoring playoff games in VHSL history. Two of the Deacons’ three losses came to Appalachia that season.

Yet, it didn’t put a damper on what St. Paul had achieved.

“While I haven’t thought about it in a long time, that season was awfully important to a group of teenagers who thought football was life,” Davis said.

St. Paul never got to experience a postseason victory again after that 2001 season, but the feeling remains a fresh memory for those who were there.

The school played its final football game in 2010 as it merged with Coeburn to form Eastside High School.

“To this day, that team was one of the most selfless teams and locker rooms that I’ve been a part of, in all my years of athletics,” Thompson said.

Now, for a look at high school football moments that occurred this week in history:

Gerald Poe’s touchdown run and Tom Hill’s extra point kick with 4:36 remaining to put Chilhowie ahead to stay in a 7-6 victory over Fluvanna in the VHSL Group A state title game in Charlottesville.

Jon Griffin could light up a scoreboard thanks to his wide array of skills and would light up a room with his personable demeanor and ever-present grin.

LOCALS IN THE PROS: Mac McClung (Gate City) nearly gets triple-double in first game back with South Bay Lakers of G League

His stepback jumper with 2:46 remaining broke a 107-107 deadlock and put South Bay ahead to stay.

One of the most successful football coaches in recent memory in Southwest Virginia returned over the weekend. Greg Mance spent 23 years, from 1997-2019, winning 205 games at Richlands. He returned last Saturday to take part in a signing ceremony for Richlands senior Sage Webb, who committed to continue his athletic and academic career at the University of Pennsylvania.

Kayli Dunn is averaging 19.0 points, 7.0 rebounds, 2.5 steals and 1.0 assists in her first two games for the girls basketball team at Twin Springs High School since transferring from Providence Academy in Johnson City, Tennessee.

ED CRESSEL CLASSIC: Union's Potter, Satterfield rely on one another

During the week, Thomas Potter and Johnny Satterfield try to bust moves on each other in the Union High School wrestling room.

There are no unbeaten basketball teams left in far Southwest Virginia. Ridgeview suffered its first loss of the season, falling at home to Mountain 7 District rival Abingdon.

Abdul-Saboor finished 21st in the two-man event and 19th in the four-man competition at the 2018 Winter Olympics in Pyeongchang, South Korea.

“ I would describe this team as being very athletic, fast and very versatile,” Miller said. “On any given night any of the eight players could step up and be a big impact for the team. Our goal has been to improve every time we take the floor and I definitely can see that when they play.”

Having the opportunity to play football while working toward an Ivy League education is a dream combination for any young athlete.

Innovative insulation unveiled for Team USA ahead of Winter Olympics

Daniel Davis (center), Jonathan Kirk (right) and John Baker pose for the camera prior to the 2001 season.