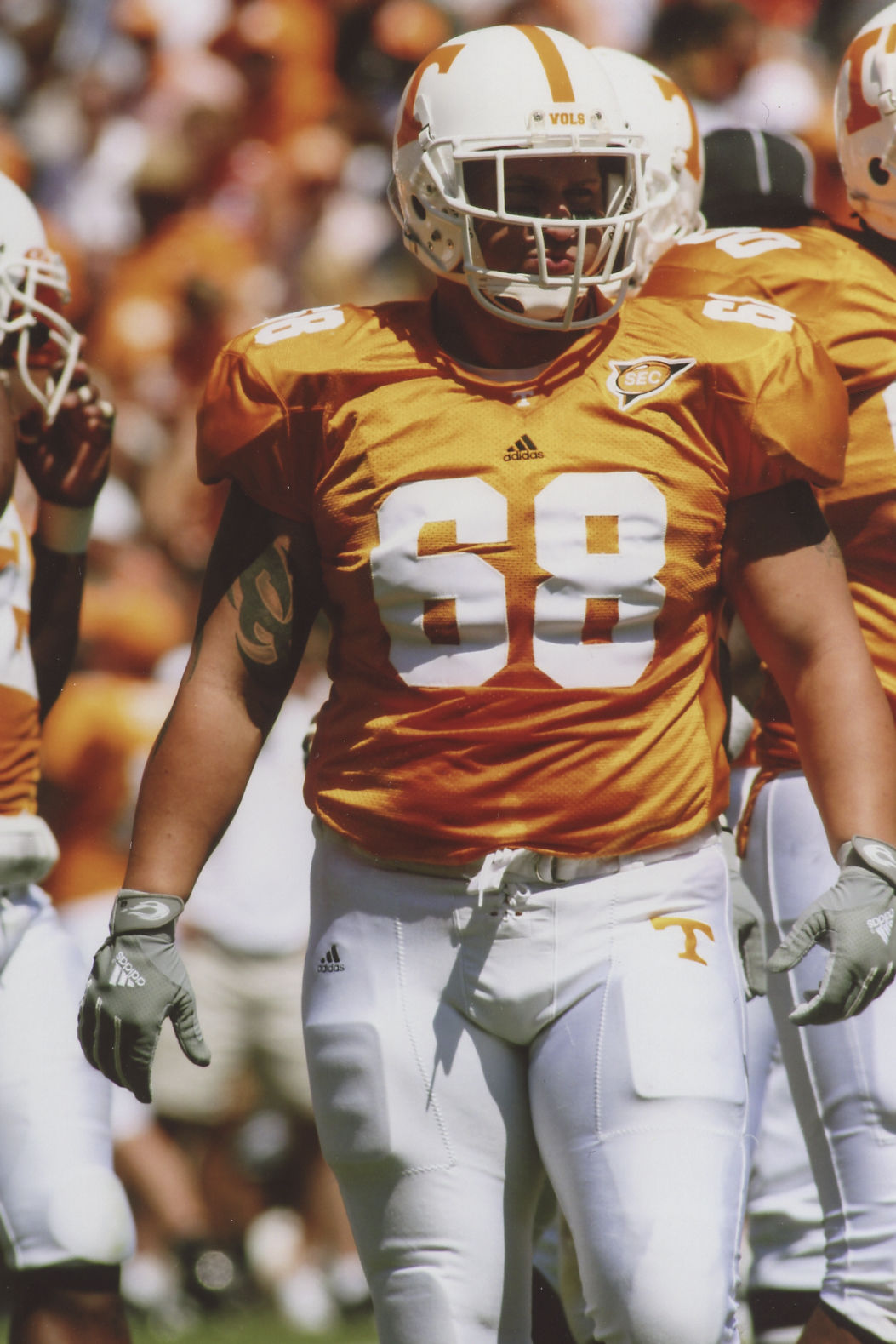 KNOXVILLE, TN - September 03, 2005 - Defensive lineman Matt McGlothlin (68) during the game between the University of Alabama Birmingham Blazers and the Tennessee Volunteers at Neyland Stadium in Knoxville. 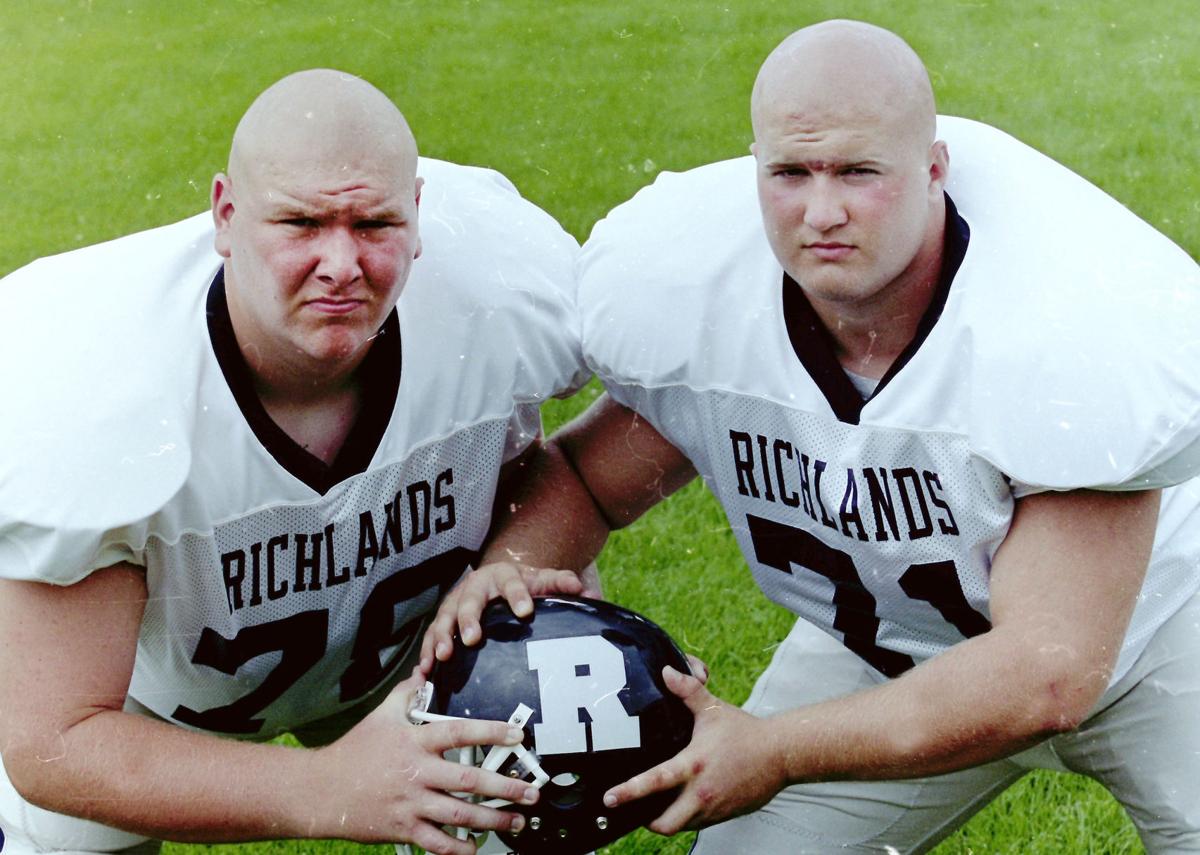 Matt McGlothlin overachieved on the football field by always outworking and overpowering the person lined up across from him.

The kid who didn’t start in the eighth grade became a four-year starter at Richlands High School.

The guy who spurned scholarship offers from other NCAA Division I programs decided to attend the University of Tennessee as a walk-on and ended up playing in 36 games for the Volunteers as a defensive lineman and making 26 tackles.

He had a brief stint with the NFL’s Kansas City Chiefs and also played with the Arena Football League’s Orlando Predators.

Nobody could have predicted such a journey if they would have seen him during his initial weightlifting session at Richlands prior to his freshman year.

“He took the weights off one side of the bar and it flipped up. We kicked him out of the weight room and had him go sit in the bleachers,” said Richlands coach Greg Mance. “We ran after that and he threw up. I told him to come back the next day and he worked hard that next day and eventually made himself into a fantastic football player.”

McGlothlin died on April 17 at the age of 36 and his funeral will take place on Saturday in Alcoa, Tennessee.

It was another tragic loss for the Richlands football program. Devon Johnson, once a star running back for the Blue Tornado, died in November.

“Two of the most decorated players to come out of Richlands,” Mance said. “They were not only great football players, but were better people.”

A weight room warrior, a hard hitter who rattled the helmets of many opponents, a rock-solid resolve and a sense of humor are just part of the legacy McGlothlin left at Richlands and Tennessee.

A weight room he was once kicked out of became his second home.

“The hardest working kid in the weight room I’ve ever coached,” Mance said. “He would lift at school and then go home and lift. We had to tell him to take some time off so his muscles could rest. He benched about 415 pounds when he left here.”

He put those muscles to good use on the field and flourished on both sides of the line for the Richlands Blue Tornado.

“He was one of the hardest hitting players I have ever been hit by in practice or in a game,” said David Baldwin, a lineman with the Blues during McGlothlin’s time at the school. “But he was always there to pick you up and keep you going.”

McGlothlin usually got the better of any running back he met in the hole.

“We were playing Clintwood our senior year [in 2000],” said former Richlands lineman Jared “Bull” Horn. “They had a stud running back named Justin Hamilton. All we heard all week was how good he was and how many yards he was averaging. I think it was like 200 coming into the game. Well, that Friday night our defense showed up and one of the biggest plays and hits of the game came from Matt when he split the double team and crushed Hamilton in the backfield for a loss. I think he only rushed for about 40 yards that game.”

Intense on the field, McGlothlin was a gregarious giant when he wasn’t between the lines.

“One thing I’ll never forget though is that laugh he had,” Baldwin said. “A chuckle that you would recognize out of a room full of people.”

McGlothlin could also laugh at himself.

“One funny football story is we were playing Virginia High our senior year,” Horn said. “We were on about the 5-yard line about ready to score and Mance called 32-trap where Matt was supposed to pull and trap the defensive tackle. Well, Kevin, Matt’s brother, thought that our quarterback called 33 trap. Well, needless to say both Matt and Kevin pulled and hit each other right behind me and our running back, Michael Mabe, got hit in the backfield.”

McGlothlin spent a season at Fork Union Military Academy after he left Richlands and once again impressed. Several schools wanted his services, but he chose to take his skills to the Southeastern Conference.

Some people scoffed, but that never stopped McGlothlin.

“If you told him he couldn’t do something,” Mance said. “It was his goal to prove you wrong. He just had that burning desire to succeed.”

He was short for a lineman (6-foot), but the 290-pounder always got his pads low and more than held his own in the trenches.

“I know I’m not the most talented guy in the world, but I do have that fierce competitiveness,” McGlothlin told the Bristol Herald Courier’s Brian Woodson in a 2003 interview. “There wasn’t any doubt in my mind I could play at Tennessee. Not from a talent level, but I knew I could do it because of my competitive spirit and hard work. I knew if I really worked [hard], everything would fall into place. … You wonder how a little ol’ Southwest Virginia athlete can compete with these guys, but they’re in the same boat you are. Everybody is just trying to make it.”

He made it at Tennessee and left a lasting impression. Reporters always wanted to get a comment from a guy who was refreshingly honest and ready with a quip.

On message boards and fan sites over the last few days, folks recalled some key plays he made in a 30-27 victory over the LSU Tigers in 2005.

Former UT standout Jayson Swain referred to him on Twitter as a “teammate who always lit up the room with his personality.”

From Richlands to Fork Union to Tennessee to his job in the pharmaceutical industry after is playing days were done, nobody will forget Matt McGlothlin.

“The guy never went anywhere he didn’t make a positive impact on people,” said former Richlands quarterback Brandon Bales. “His loss is going to be felt in many circles for a long time.”

The following is a look at high school baseball moments which occurred this week in history:

John Absher and Dean Thomas had Tennessee High’s only hits off Lonnie Lowe as the Vikings dropped a 3-1 decision to Science Hill. … Lewis Eads and Jim Cadle homered in John Battle’s 11-8 win over Lebanon. … Behind three hits from Bill Bryant, Patrick Henry posted an 8-6 victory over Sugar Grove.

David Pate’s five RBIs set the pace in Coeburn’s 18-4 overpowering of Ervinton. … Twin Springs triumphed over Keokee, 4-3, as Jeff Culbertson and Ricky Hughes each had two hits. … Keith Stratton pitched a four-hitter in Tennessee High’s 6-1 win over Greeneville. Tom Ed Morton had three hits and four RBIs to lead the Vikings at the plate.

GREGORY COLUMN: For coaches, it's not easy to plan amid a pandemic

It’s a balmy July afternoon in far Southwest Virginia and a head football coach is looking for some relief in his cramped office.

Abingdon graduate and Georgia sophomore Connor Creasy advanced to the quarterfinals of the Western Amateur before falling to an opponent from Texas.

WATCH NOW: The bigger picture: Adams teaches his Pioneers not to allow adversity to keep them down

Lebanon baseball Doc Adams has had more than his share of adversity and disappointment, but refuses to let it get him or team down for long.

Football the way it ought to be.

KNOXVILLE, TN - September 03, 2005 - Defensive lineman Matt McGlothlin (68) during the game between the University of Alabama Birmingham Blazers and the Tennessee Volunteers at Neyland Stadium in Knoxville.