Subscribe
Read Today's E-Edition
Share This
GAVIN CROSS PATH TO THE PROS: Gavin Cross has always shared his love of baseball with dad Adam
0 Comments
Share this
Presented By 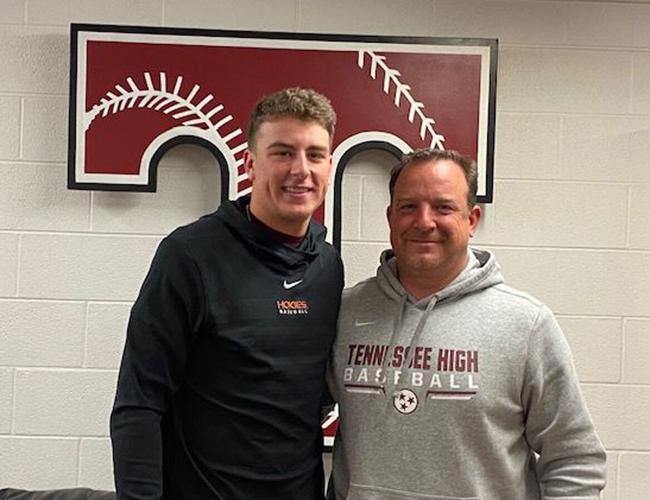 Adam Cross poses with son Gavin who was a freshman at Virginia Tech in this 2020 photo. 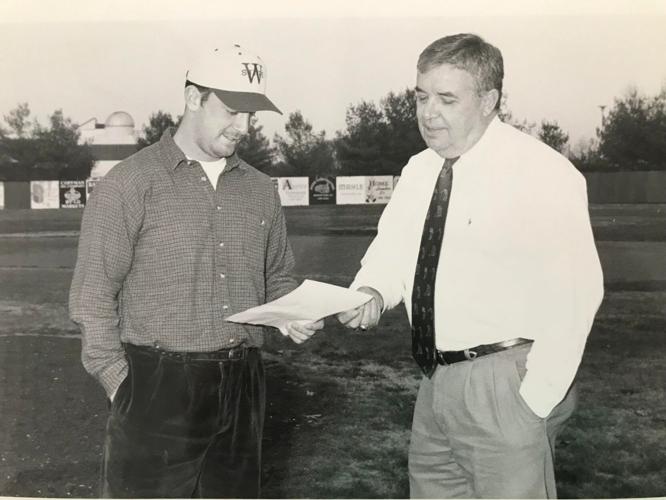 Baseball has long helped form an unbreakable bond between fathers and sons and that has certainly been the case when it comes to the relationship Gavin Cross has with his dad.

Cross was an all-state performer at Tennessee High, an All-American at Virginia Tech and come Sunday the star slugger will be a first-round pick in the Major League Baseball Amateur Draft.

He’s always quick to give major credit to Adam Cross – the man who first put a bat in his hand, bought him his first glove and taught him the finer points of the sport – when discussing his rise to prominence.

“Obviously I have a love for the game, but he’s the one that introduced it to me,” Gavin Cross said. “All the foundational stuff with my swing and knowledge of the game; how to play the game and how to control your emotions in the game all stems from him. He’s coached me since I was 4-years-old and still does now.”

He’s now the father of a prized prospect and the stories of Adam and Gavin Cross will always be interwoven with the common thread being baseball.

“AC was a utility guy, who really loved the game of baseball,” said Pete Paciorek, who played with Adam Cross for one season in the minors. “I remember him playing every position in the infield, except first base, as well as in the outfield. He didn’t have the tools that Gavin has, but he was a darn good ballplayer.”

Gavin Cross is 6-foot-3, owns a sweet left-handed swing, can cover some serious ground in center field and in scouting jargon is a five-tool player who can hit for average, hit for power, run, field and throw exceptionally well.

What was the scouting report on 6-foot-1 right-hander Adam Cross back in the day?

“I was a middle infielder who could run,” Cross said. “The only tool I had that would play in today’s game would be my speed. I had a plus run tool I guess you could say … I had a love for the game and I wasn’t afraid of the grind, I just wasn’t every good.”

“As a player Adam got the job done,” said Chris Hutton, his former Tennessee High teammate. “Great contact hitter that could spray it all over the diamond, scrappy in the field and smooth at second base. … Adam was a hard worker and wanted everyone to work as hard as he did. We played the middle infield together for three years at THS and his drive and motivation was one of a kind.”

Cross spent many hours at Tod Houston Field scooping up groundballs and taking rounds of batting practice to improve his game.

“Don’t get me wrong, Adam had plenty of talent,” said former high school teammate Brandon Ware. “But he used every ounce God gave him.”

Cross continued to hit at the collegiate level and was an All-Southern Conference performer in 1995 for the East Tennessee State University Buccaneers as he compiled a team-leading .311 batting average.

He went undrafted, but impressed Atlanta Braves scout Jack Powell enough at a tryout the organization inked him as a free agent.

His manager in Eugene was Virginia High graduate Jim Saul and among his teammates was future big leaguer Mark DeRosa. DeRosa is an analyst for the MLB Network these days and praised Adam Cross when he interviewed Gavin last month at the MLB Draft Combine in San Diego.

“Adam was a throwback player who played the game the way it should be played,” said Dax Norris, another teammate of Adam’s in Eugene. “Good infielder who could swing the bat and had a very good approach at the plate. We had a bunch of drafted college players in Eugene in the summer of ‘96 and he was one of the top players.”

“AC was like a grown man playing with all of us kids. I think he is only a few years older than me, but he was like a salty vet on the team coming to the Padres from the [Braves],” Paciorek said. “My favorite memory of AC was him bringing a cute, little black lab puppy home to our two-bedroom apartment down the road from the ballpark in Clinton. We’d come home late after the games and the pup would have destroyed the apartment on a regular basis. I still don’t know what he was thinking.

“I know AC brought up a great young man in a son. I wish him good luck in the upcoming draft. Once Gavin gets into pro ball, I hope he can stay out of the pet stores.”

When the time comes that professional baseball players get released it can be a bitter pill to swallow, but Adam Cross was a realist when he got the pink slip from the Padres.

“By the time I had spent three years in the minor leagues, I had a great deal of understanding that it was a business,” Cross said. “Every year they’re paying guys signing bonuses and if they bring in 20 guys, 20 have to go and if they don’t have an investment in you you’re on the short end of the stick unless you are doing really well. I’m grateful I got to play the game for three more years.”

His involvement in baseball certainly didn’t end when his playing days were done. Cross had a three-year stint at Walters State Community College, including time as the interim head coach of the Senators.

He’s done scouting work for the Cleveland Indians and Atlanta Braves organizations and has been a longtime assistant coach for the Tennessee High Vikings.

More than a decade ago, Cross started the Crusaders travel-ball organization that has since grown to include teams in different age groups and has produced plenty of talent throughout the area. He gives props to the coaches who volunteer their time to coach the various teams.

His prize pupil has been his eldest son, but it’s not as if Adam Cross is some taskmaster.

“What’s really cool is I’ve never had to push Gavin to want to go throw or want to go hit,” Adam Cross said. “That was already there.”

Sunday will be a life-altering event for Gavin Cross as he begins the first step in a journey he hopes takes him to the big leagues.

Gavin’s parents, Adam and Becky, and his siblings – brother Garrett and sister Kendall – will get to share in the exhilarating moment when a MLB club calls his name.

Another chapter will also unfold in the story of Adam Cross and Gavin Cross.

“For me, I’ve always been able to separate coach and dad,” Adam Cross said. “I probably live more in the coach’s world than the dad world sometimes, but I know on draft night I’ll be dad.”

Gavin Cross: Path to the Pros

Former Tennessee High star Gavin Cross of Virginia Tech is projected as one of the top picks in the Major League Baseball Amateur Draft, which will be held July 17. This is the fourth in a series of stories leading up to the event as Cross begins his journey as a professional baseball player.

GAVIN CROSS PATH TO THE PROS: From Bristol to Blacksburg to the big leagues. Kevin Barker did it. Gavin Cross hopes to.

Being a radio and television analyst for the Toronto Blue Jays keeps Kevin Barker plenty busy, but he still finds time to check in on the baseball program at Virginia Tech.

He can’t help but notice on those occasions when scanning information on his old school the numerous highlights and exploits of superstar slugger Gavin Cross.

“I follow Virginia Tech on Instagram,” Barker said in a recent telephone interview. “And he’s all over it.”

Gavin Cross of Virginia Tech will be selected in the first round of the Major League Baseball Amateur Draft on Sunday as he experiences a life-altering moment that’ll bring a new employer, a hefty signing bonus, high expectations and major media attention for the Tennessee High graduate.

There are a few dudes from around these parts who can relate.

The ultimate goal for Gavin Cross is to not only reach the big leagues, but to stay there and become an everyday player for whichever of the 30 clubs employs him in the outfield.

Crossing paths a summer ago in the Cape Cod League and again last month at the Major League Baseball Draft Combine in San Diego, Gavin Cross and Jacob Watters were able to chat a bit.

ESPN draft analyst Kiley McDaniel said on a video conference Tuesday that there is an 85% chance the Virginia Tech center fielder will be chosen anywhere from the eighth overall pick to the 14th overall pick.

GAVIN CROSS PATH TO THE PROS: The next step is the Major League Baseball Amateur Draft on Sunday

Gavin Cross has worn the uniforms of many different teams since he began playing baseball.

GAVIN CROSS PATH TO THE PROS: Some Draft Day reading on the top pick's career from the Bristol Herald Courier Archives

Gavin Cross is expected to be a top-10 pick in the 2022 Major League Baseball Amateur Draft. The following is a look at the Bristol Herald Cou…

When former Tennessee High slugger Gavin Cross of Virginia Tech gets selected in the first round of the Major League Baseball Amateur Draft on July 17, the world will know about it.

GAVIN CROSS PATH TO THE PROS: A five-tool player, Tennessee High grad Cross will be a first-round pick

Those who have known him the longest say that Gavin Cross has been gripping a baseball bat since he was old enough to walk and he’s never stopped swinging.

A small article appeared in the Bristol Herald Courier on a late-August day in 1932, updating readers on how the initial practices were going for head coach Harry Thayer’s Tennessee High football squad.

Tom Brady reveals the reason he hates the 49ers

The potentially legendary outcomes of the World Cup

The potentially legendary outcomes of the World Cup

The craziness of the 1930 World Cup

The craziness of the 1930 World Cup

Five players who have played at five World Cups

Five players who have played at five World Cups

Adam Cross poses with son Gavin who was a freshman at Virginia Tech in this 2020 photo.