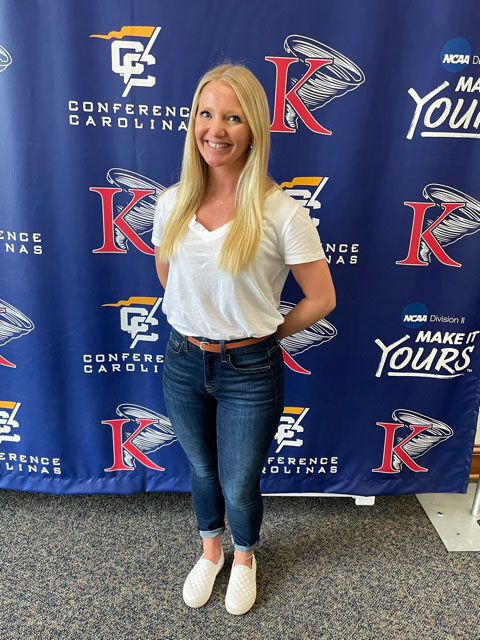 Miranda Merkison, the acrobatics & tumbling coach at King University, has guided the Tornado to a 5-0 record, with the inaugural Conference Carolinas Championship slated for this weekend at the Student Center Complex. The Tornado are currently ranked 4th in the nation in what is classified as an emerging sport by the NCAA. 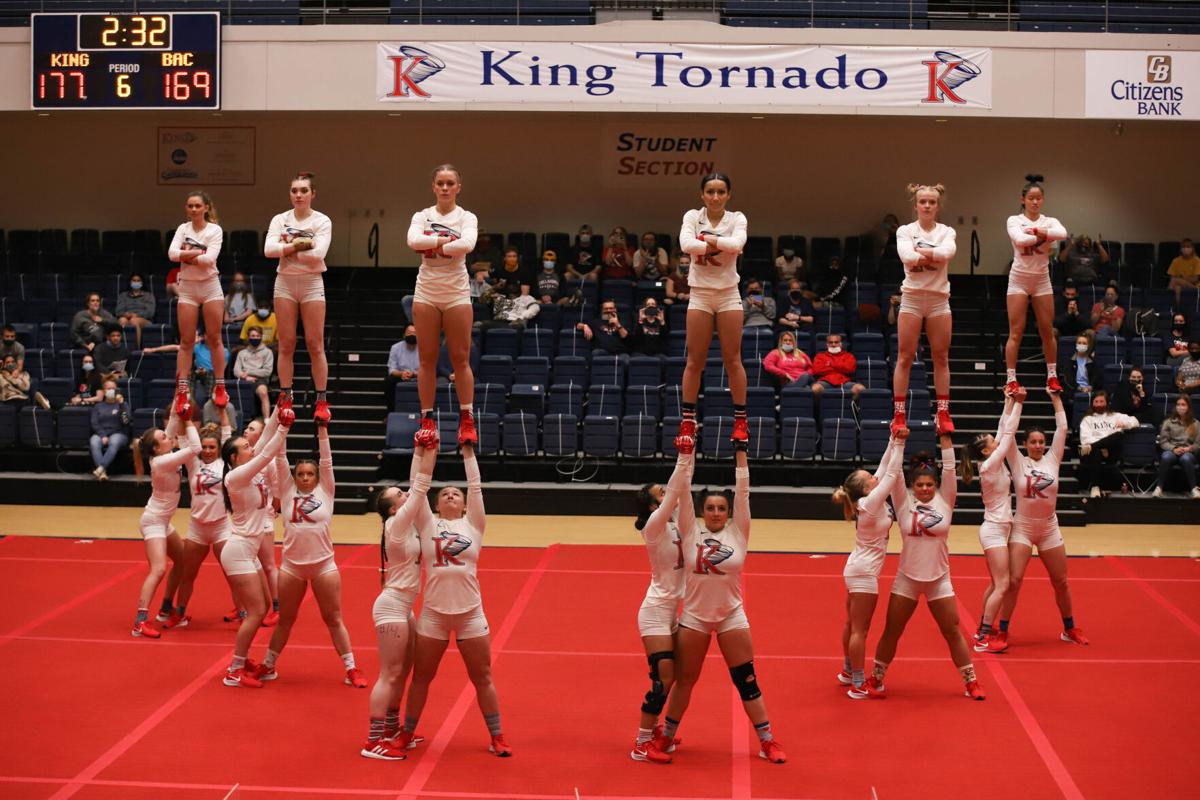 The King University acrobatics & tumbling team will be action this weekend for the Conference Carolinas Championship.

BRISTOL, Tenn. – It’s an inaugural event, and Miranda Merkison is thrilled that King University is the host. Even better, the Tornado is the top seed in the Conference Carolinas Acrobatics and Tumbling Championship on Saturday and Sunday at the Student Center Complex.

“Obviously there is pressure, but really the main thing is we are really blessed to be able to host,” said Merkison, in her fourth season as the King Acrobatics and Tumbling coach. “As far as the other teams that are coming, it is such a cool opportunity that we have never gotten before.”

Joining King, which is ranked fourth in the most recent National Collegiate Acrobatics and Tumbling Association (NCATA) national poll, will be No. 5 Limestone, No. 8 Converse and Belmont Abbey.

“We have three teams that are ranked in the top 10 so that is really fun and I know in a couple of years it is going to get even better and more competitive,” Merkison, a native of Loganville, Ga., who won three national team crowns and six individual titles while competing at Oregon for head coach Felicia Mulkey, one of the founders of the sport, who is now at Baylor. “She recruited me and I went out on a recruiting trip and fell in love.”

“I have always been passionate about the sport obviously because I was on the second team that was part of acrobatics and tumbling,” Merkison said. “For me, I really wanted to make an impact, and I wanted to continue growing our sport. Obviously being new, we were all young and the only way to get the word out and actually have a successful program is by people who have done it…

“For me it was a great opportunity,” said Merkison, who replaced Megan Bamford as King coach in 2017, having previously spent two years teaching in Chattanooga. “Obviously I love King and that is why I am here.”

The only teams ranked ahead of King are Oregon, Baylor and Hawaii Pacific. King is 5-0 on the season, while those three schools all have one loss apiece. King, which started its program in 2014, has set or matched 12 schools records this season and has already secured its best record since the program started in 2014.

“We have come a long way,” Merkison said. “School records this year have been really impressive. This group of athletes is extremely hard working, and that is what we look for every meet.”

King will not only compete for a conference crown, but the top four teams from across the nation will complete in a national competition at Baylor on April 22-23. Normally it is eight teams, but the number was slashed this year due to coronavirus concerns.

While Merkison hopes the Tornado qualifies for that event, she is just looking for continued overall improvement this weekend.

“We have really been working on improving our start values going into the championships,” said Merkison, whose team is tested twice a week for COVID-19 due to the high-risk frequency of making frequent contact in practice and meets. “A lot of what we want to work on is precision and executing our skills on the mat. Really we just want to have fun, that is what it is about. They are prepared, they are ready, they have done everything that they can, it is just going out there and executing.”

Acrobatics and Tumbling is classified as an emerging sport by the NCAA, a sport with many of the characteristics of gymnastics that includes both team and individual skills in six events and 20 heats that involves compulsory, acro, pyramid and toss elements.

Teams begin a meet with a start value, and NCATA-sponsored officials judge the performances, watching intently to find any indiscretions that would largely go unnoticed by a novice to the sport.

“They are deducting according to if you toes are pointed, if your feet are apart, all the different deductions that they are taking from the start value and they deduct from there,” said Merkison, who is assisted by volunteer coach Kara Mays. “It is technique. There are specific techniques and we obviously have a code of points that we follow that explains that technique and what they are looking for.

“Obviously, to the naked eye we all look the same, but you have to know the sport and the precision of it. Memorization for sure in team events counts. Obviously synchronization is huge, that is a big part of our sport. It is hard to get five athletes do the same thing, or eight athletes, and in a team event you have 24.”

White is one of six team members who have earned conference and national recognition this season, joining Lindsey Bowles, Jayden Nelson, Catherine Reynolds, Alexis Wynn and Claire Guittard. All have particular skills they can focus on in the sport.

“It is a lot of fun because what is cool about our sport is you specialize in what you can do,” said Merkison, whose team averages 10 ½ hours of practice per week, with two days off during a normal week. “Your start values are calculated on so many different elements and whatever we are good at that is what we compete at and you can be competitive.

“Tumbling events definitely is one we love to be competitive in. We push our athletes and it is really just about getting out there and competing and the love for the sport.”

Merkison said teamwork and trust are a key focus in a sport where talented, strong and fearless athletes are literally being tossed in the air, knowing their teammates will be there to keep them from harm.

“Trust is huge. We really work on that a lot in our process. Trusting each other is how you can get higher skills and you can get moving forward so for us a lot of it is strength,” said Merkison, whose program is represented by 10 states, and she will have her first international student from Canada in the fall. “We do a lot in the strength and conditioning program that we use. On top of that, it is the technique and being able to do all those skills obviously goes with the trust…

“They are a complete package of strength and passion, they are just ready for it. They have got agility, they have got everything. I could name like a bazillion things.”

Interested? Unfortunately, due to COVID-19 restrictions, attendance this weekend is limited to two parents per athlete, along with King faculty, staff and students. However, Merkison said as many as a thousand viewers have watched each of the previous five meets this season via https://conferencecarolinasdn.com/. The King program can also be followed @kingacrotumbling on Instagram, via twitter @kingacro and at KingAcrobaticsAndTumbling on Facebook.

King will open the meet on Saturday at 10 a.m. against Belmont Abbey, with the winner meeting the 12:30 p.m. winner between Converse or Limestone in the semifinals on Sunday at 5 p.m. Individual acro finals including pyramid and tumbling will be held on Sunday at 11 a.m.

Merkison hopes those that are in attendance are ready to make some noise.

“We love a loud, fun environment. I need energy from everywhere so that is really important,” she said. “You have music the whole time, a lot of our young fans will come. They love it. They have a lot of fun watching just because it is really cool. We encourage everybody to watch.”

Trevor Culbertson was already one of the better high school basketball players in Southwest Virginia. He is now playing football at J.I. Burton for the first time since eighth grade and has been a key cog in the Raider' run to the Region 1D championship game slated for Friday at Holston.

That occurred after a positive coronavirus (COVID-19) test within the J.I. Burton program as the Raiders will have to sever the quarantine and will be unable to play Friday’s game in Damascus.

As teams try to reach the summit of Virginia High School League football, the Mountain 7 District has played to its peak potential this spring.

Miranda Merkison, the acrobatics & tumbling coach at King University, has guided the Tornado to a 5-0 record, with the inaugural Conference Carolinas Championship slated for this weekend at the Student Center Complex. The Tornado are currently ranked 4th in the nation in what is classified as an emerging sport by the NCAA.

The King University acrobatics & tumbling team will be action this weekend for the Conference Carolinas Championship.