Subscribe
Read Today's E-Edition
Share This
As VHSL football practice begins Thursday: “There is no blueprint for how to start football in the middle of winter.”
0 Comments
Share this
Presented By 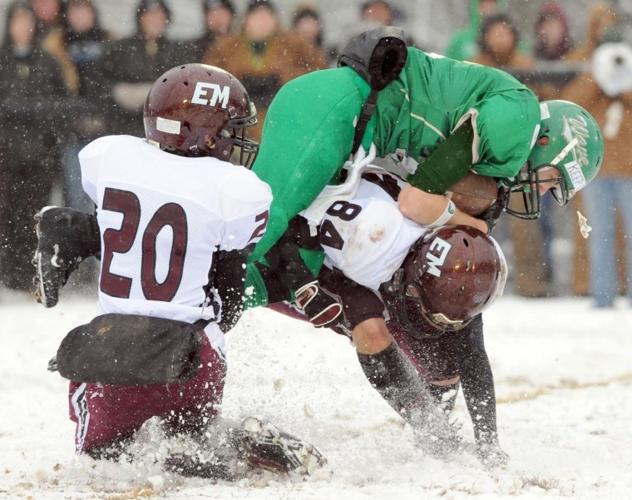 Eastern Montgomery's Kendall Sisson (20) and Matt Epperly upend Clintwood's Cody Torres on Saturday during the Mustangs' 26-21 Group A, Division 1 semifinal win over the Greenwave in Clintwood, Va. in 2010. 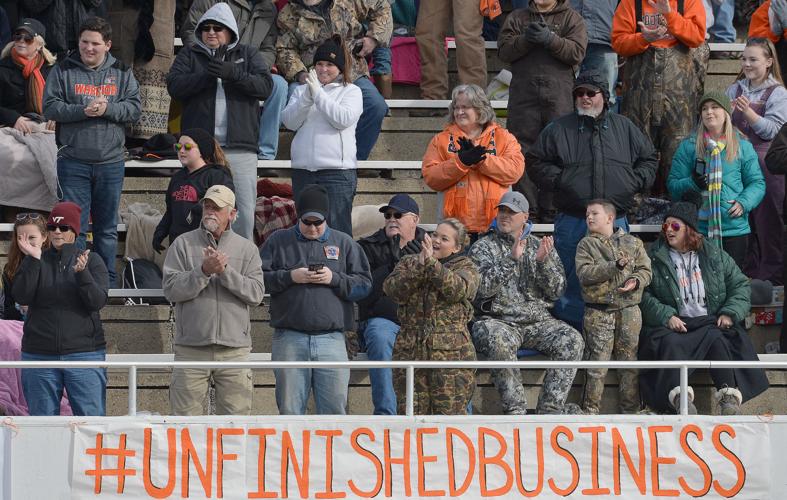 Chilhowie football fans cheer as their Warriors take the field to play against Riverheads for the Class 1 state title Saturday afternoon in Salem, Virginia.

As he officially begins his eighth season as the head football coach at Chilhowie High School this afternoon, Jeff Robinson isn’t exactly sure how the coming weeks will unfold and he’s far from alone in that regard.

“ This is new territory for every coach in the state,” Robinson said. “There is no blueprint for how to start football in the middle of winter.”

Thursday marks the opening day of practice for the most radical gridiron season in the history of the Virginia High School League after fallout from the ongoing coronavirus (COVID-19) pandemic condensed the sports calendar in the Commonwealth and moved the sport from the fall for the 2020-21 school year.

Scrimmages are scratched, those tried and true practice plans must be revised and the season will begin in a cold climate and end in the heat instead of vice versa.

“ Normally we have long practices at the beginning of the season, but we won’t be able to do that, so that will be a challenge to get everything installed and polished,” said Abingdon coach Garrett Amburgey. “We will have to be adaptable this year.”

That became a necessity when the VHSL announced in July that football would not be played in the fall of 2020. This season starts in February and will culminate in the state finals on May 1.

The schedule will consist of six regular-season games with four rounds of playoffs to follow. Those teams not qualifying for the postseason can play one additional game against a fellow non-playoff squad at the conclusion of the regular season.

Several teams will play their first games on Feb. 22, which is a Monday.

“ It’s going to be a busy February,” Robinson said. “The VHSL requires a minimum of 15 team practices before any competition can take place. Teams starting on Feb. 4 and opening up on Feb. 22 have to practice every day in February but Sundays just to meet the minimum requirement. Our coaches will meet every Sunday except this upcoming one in order to get ready for our opponents. I’ve already told them to tell their wives that Valentine’s Day is canceled for this year.”

The VHSL state basketball finals will be held Feb. 20, while the state wrestling finals involving grapplers from far Southwest Virginia are set for Feb. 18-20 and the state indoor track and field meets will take place March 1-3.

“ About half our roster is running indoor track, wrestling or playing basketball,” Robinson said. “Almost all of our skill players will begin practicing after the official start date on Feb. 4. With the minimum individual practice requirements for football in order to go full pads, we will have players transitioning to full gear at different times.

“ All our coaches are working together to see that our multi-sport athletes are able to finish their winter sport and still get their minimum required practices in for football as well. This is new as far as football is concerned. Football is usually the first sport of the year and there is not any competition with other sports. Now, football coaches get a taste of what winter sport coaches have to deal with. Back in 2017 and 2018 when we played in the state finals, [Chilhowie boys basketball] Coach [Matt] Snodgrass was without most of his basketball team for over a month.”

The last prep football contest held at a venue in far Southwest Virginia was Patrick Henry’s 41-16 loss to Galax in a Class 1 state semifinal at Emory & Henry College’s Fred Selfe Stadium on Dec. 7, 2019.

It was a surreal scene for many with gridiron landmarks like Bullitt Park in Big Stone Gap, Ernie Hicks Stadium in Richlands and Gate City’s Legion Field sitting empty on Friday nights. Meanwhile, surrounding states such as Tennessee, West Virginia and Kentucky proceeded ahead with high school football seasons.

“ I spent a lot of time with my family,” said Wise County Central coach Luke Owens. “They liked having me around more this past fall.”

The itch to return will finally get scratched today.

“ It’s exciting,” said Castlewood coach Chris Lark. “We’ve been waiting on this day since July. We’ve been working in the weight room, on the chalk board, Zoom meetings and finally we get to put a helmet on and be on the field together for the first time in 15 months.”

Along with COVID-19 protocols protecting against exposures or positive tests, a long layoff without contact could cause some issues.

“ We focused much of our recent workouts on injury prevention,” Robinson said. “The colder weather could play a factor with injuries. We also play our first three games – half our season – in a 12-day span from Feb. 22 to March 5. Teams that can stay healthy and recover quickly to be at full strength on game days will have a distinct advantage.”

A physical grueling sport will be even more so this time around.

“ This season is going to be for players that truly love the game,” Amburgey said.

Wise County Central running back C.J. Crabtree fits the bill as he takes the field for his senior season.

“ I am very excited to be back to practice and preparing for this season,” Crabtree said. “I think we will all be ready to get down to work on Thursday to prepare for our first game.”

There will still be spectator limits – the VHSL said on one of its social media channels Tuesday night that Governor Ralph Northam’s office indicated each player will be given two tickets – among other changes.

The 1970-71 VHSL season was marked by sanctioned statewide playoffs in the Group A and Group AA ranks, a major milestone in the history of high school sports in the Commonwealth.

Fifty years later, a one-year experiment featuring football in February, March, April and the first day of May will be equally memorable.

“ I have always dreamed about playing a game in the snow,” Robinson said. “That is a distinct possibility this season.”

With football practice opening for VHSL teams today, here are some things to know:

Injury Update: Virginia High junior Stevie Thomas is currently recovering from a torn ACL that caused him to miss wrestling season. He rushed for 1,386 yards, passed for 313 yards, caught two passes for 33 yards, averaged 31 yards on 30 punts, kicked a field goal and totaled 19 touchdowns last season for the Bearcats.

Here are some images from throughout Southwest Virginia from Thursday's first day of VHSL football practice as submitted by coaches from the area.

Who can afford to buy the Phoenix Suns?

Who can afford to buy the Phoenix Suns?

Eastern Montgomery's Kendall Sisson (20) and Matt Epperly upend Clintwood's Cody Torres on Saturday during the Mustangs' 26-21 Group A, Division 1 semifinal win over the Greenwave in Clintwood, Va. in 2010.

Chilhowie football fans cheer as their Warriors take the field to play against Riverheads for the Class 1 state title Saturday afternoon in Salem, Virginia.