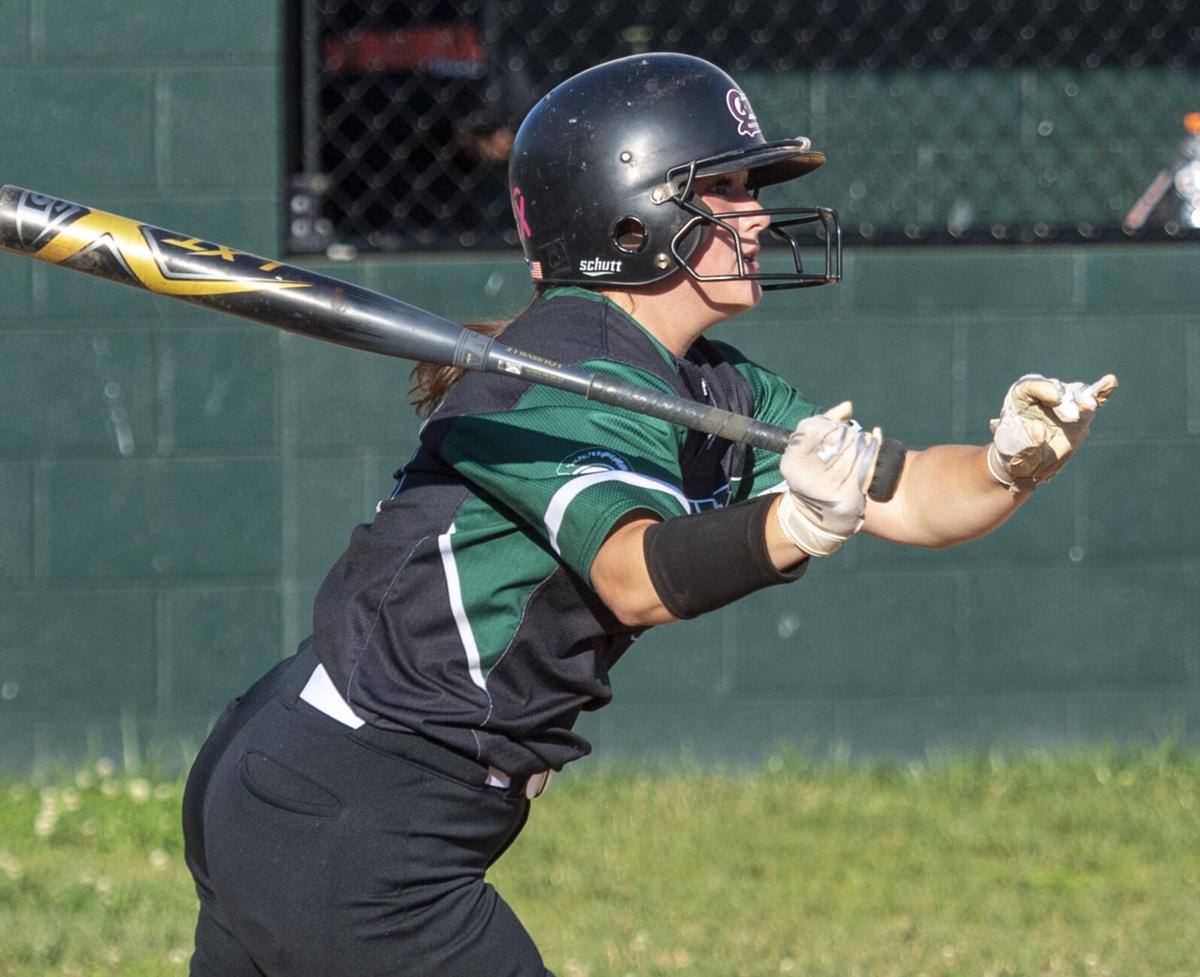 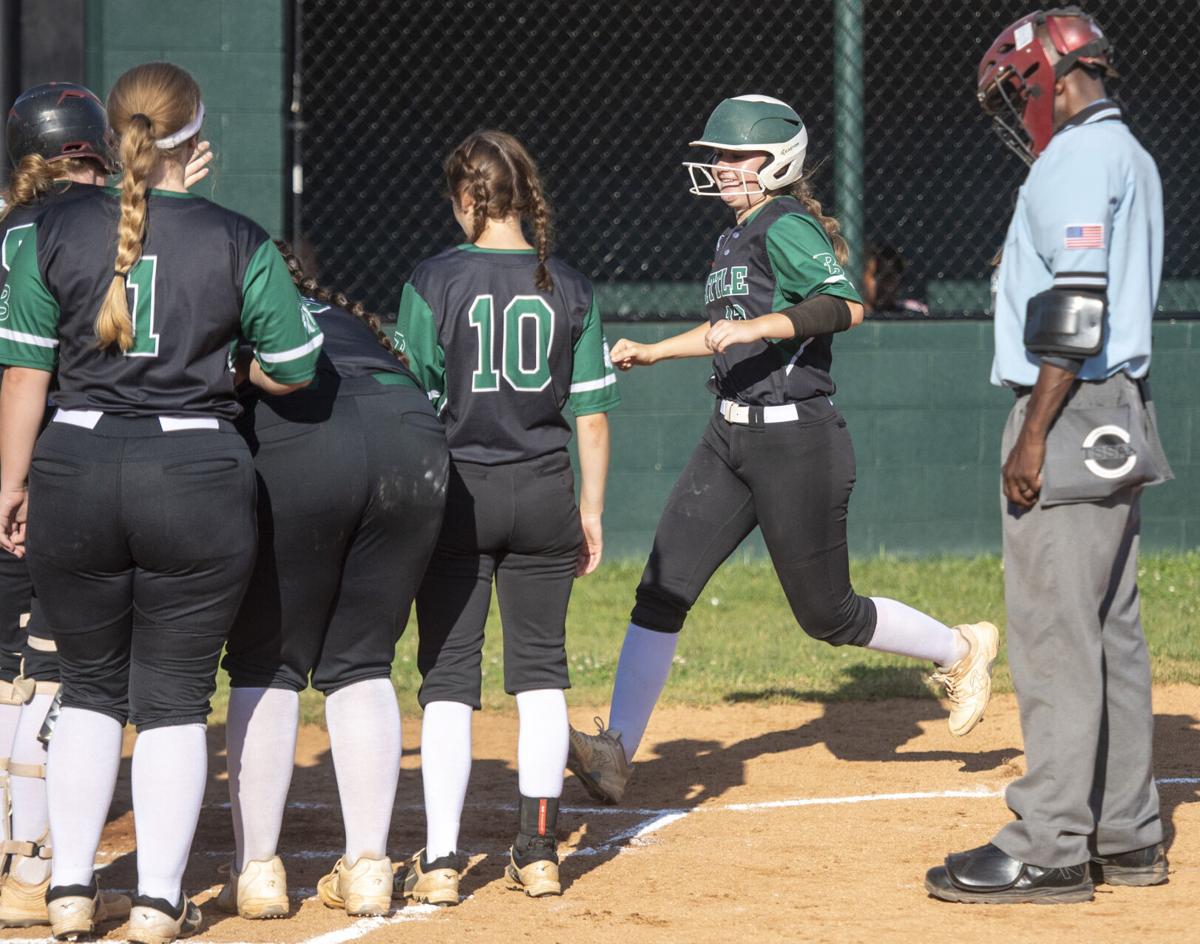 John Battle's Jordan Roulette-Wheeler, right, is greeted by her teammates after hitting a home run. 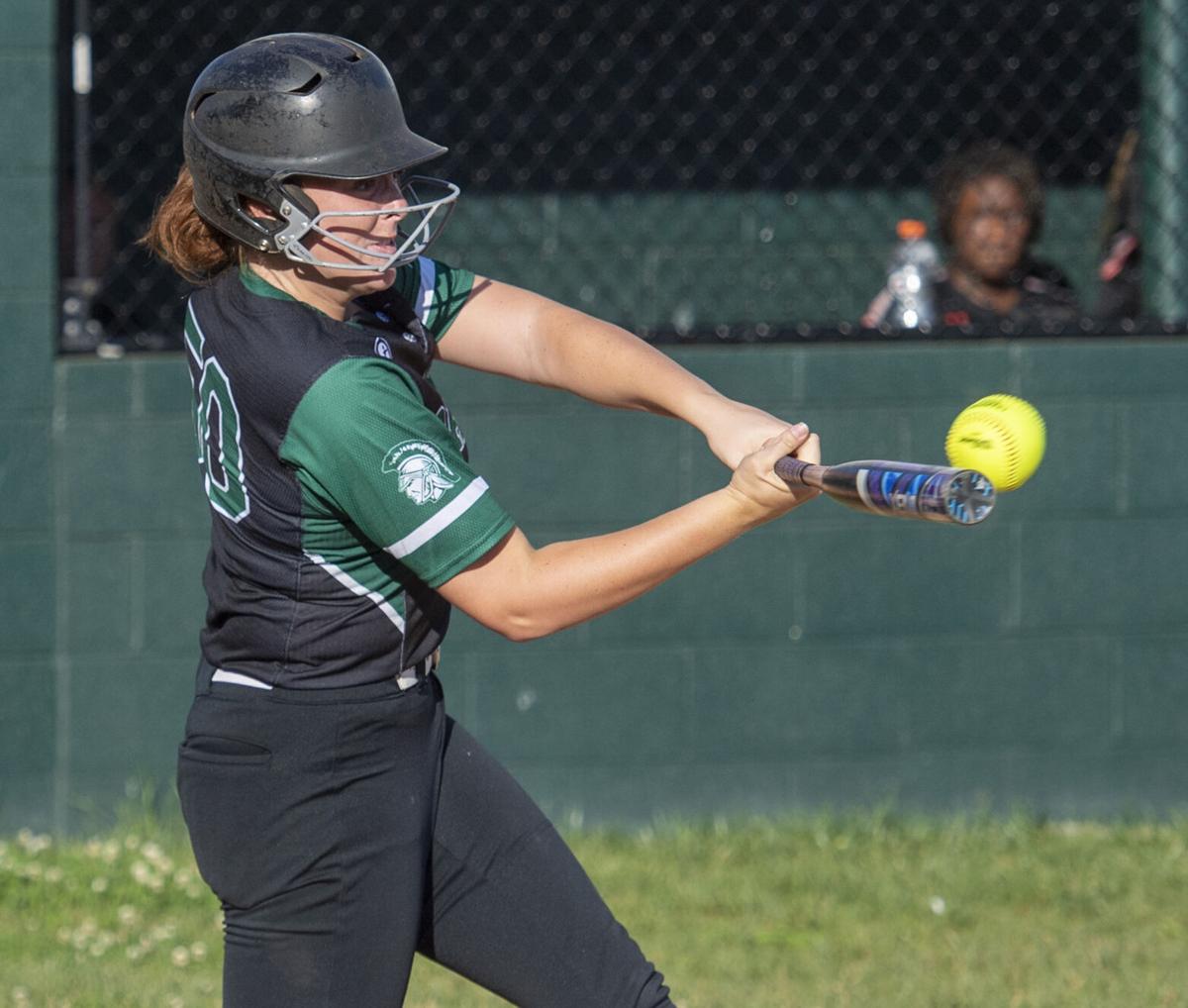 John Battle's Logan Leonard and the Trojans saw their season end with a loss to Wise County Central on Wednesday night. 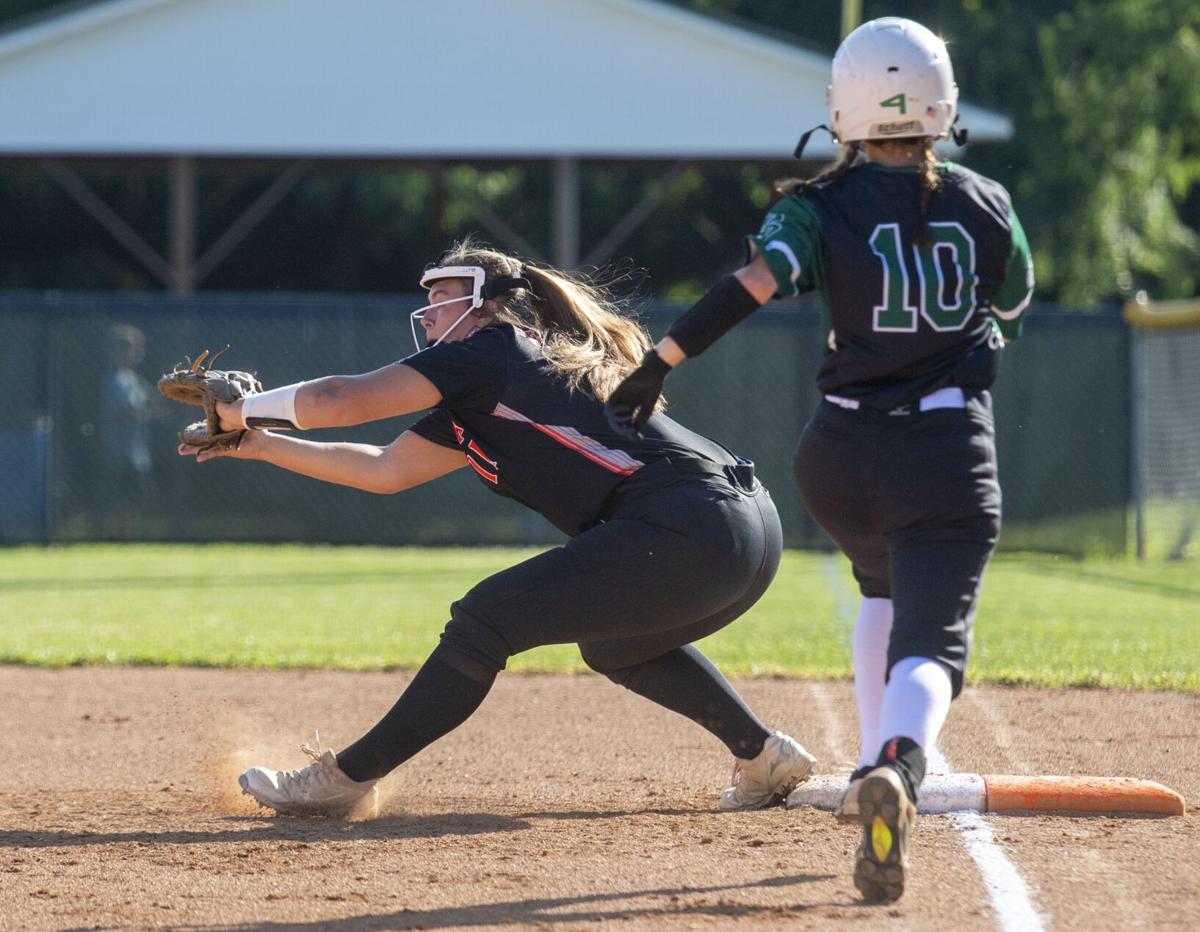 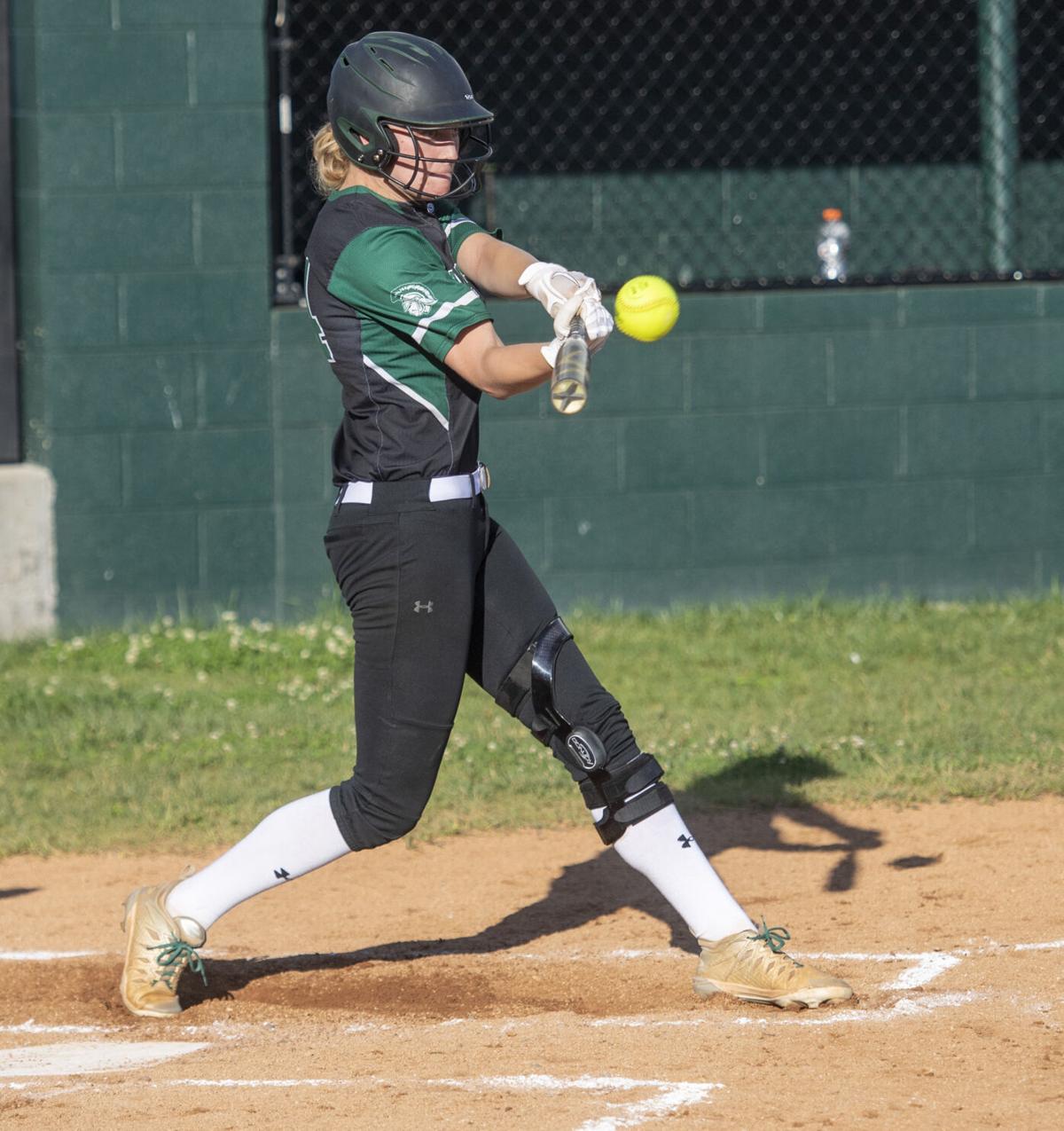 John Battle's Charleigh Gobble connects on a pitch for a home run against VHS. 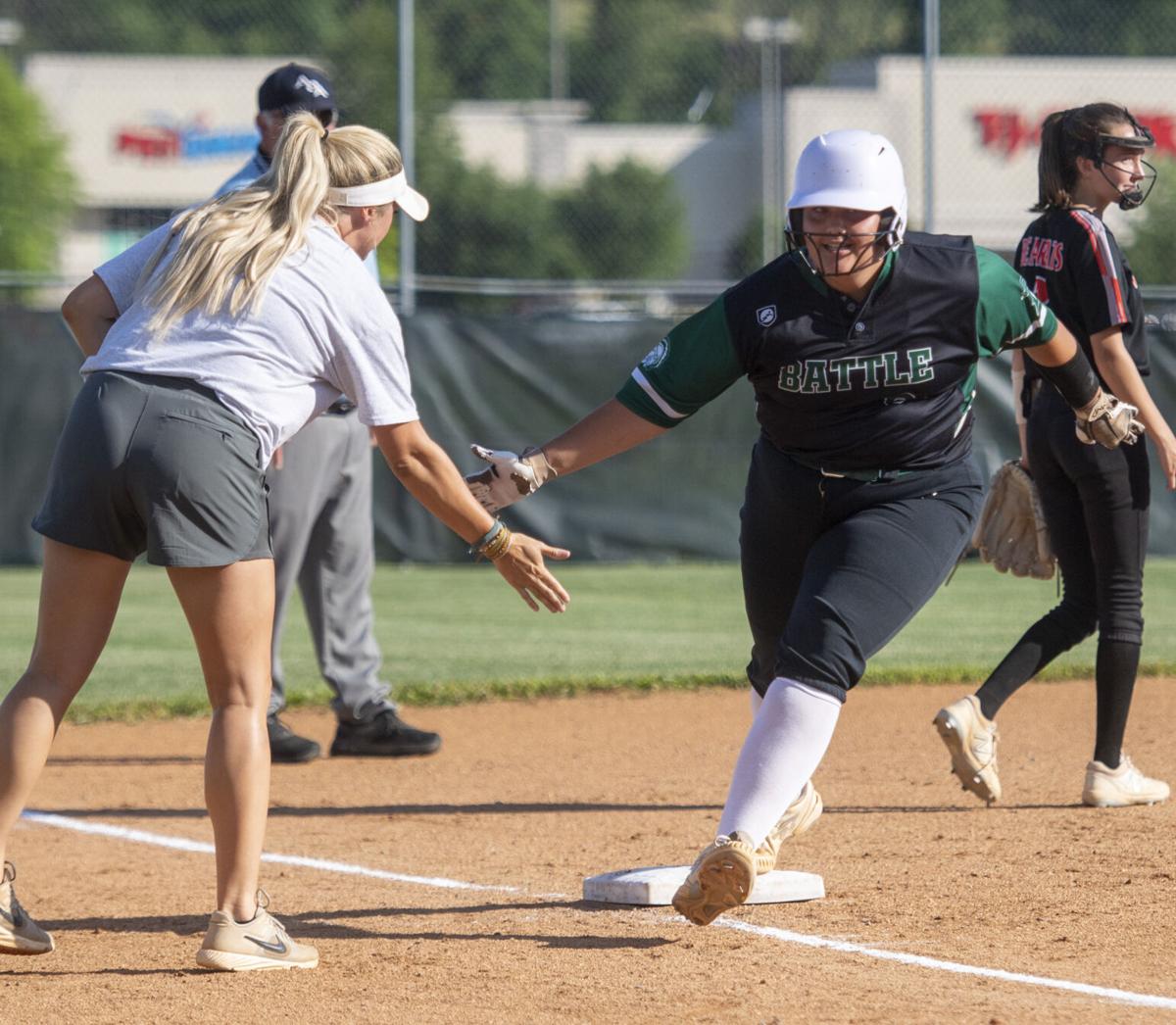 John Battle's Hannah Jo McReynolds is greeted by head coach Hannah Cress as she rounds 3rd base after hitting a home run. 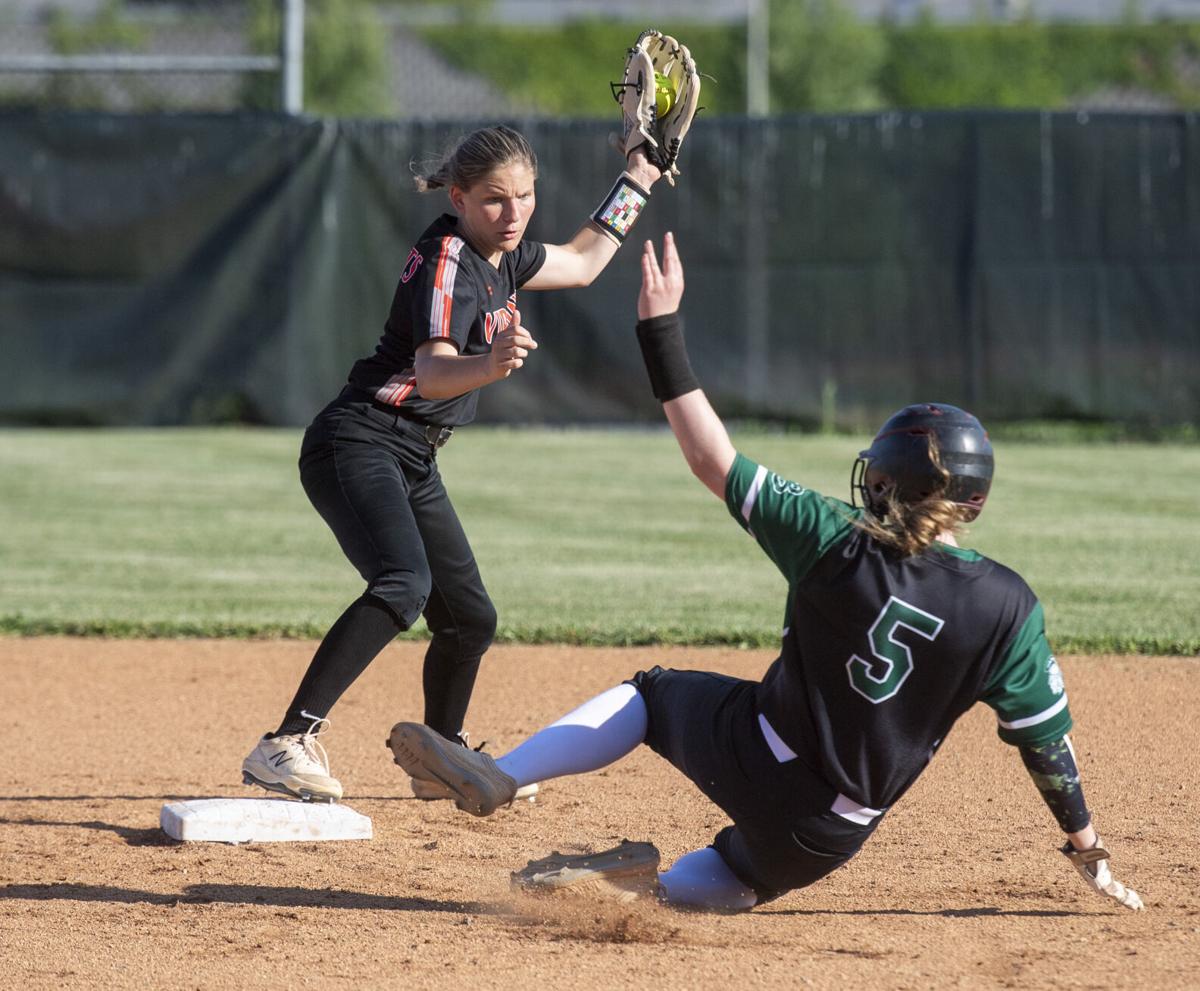 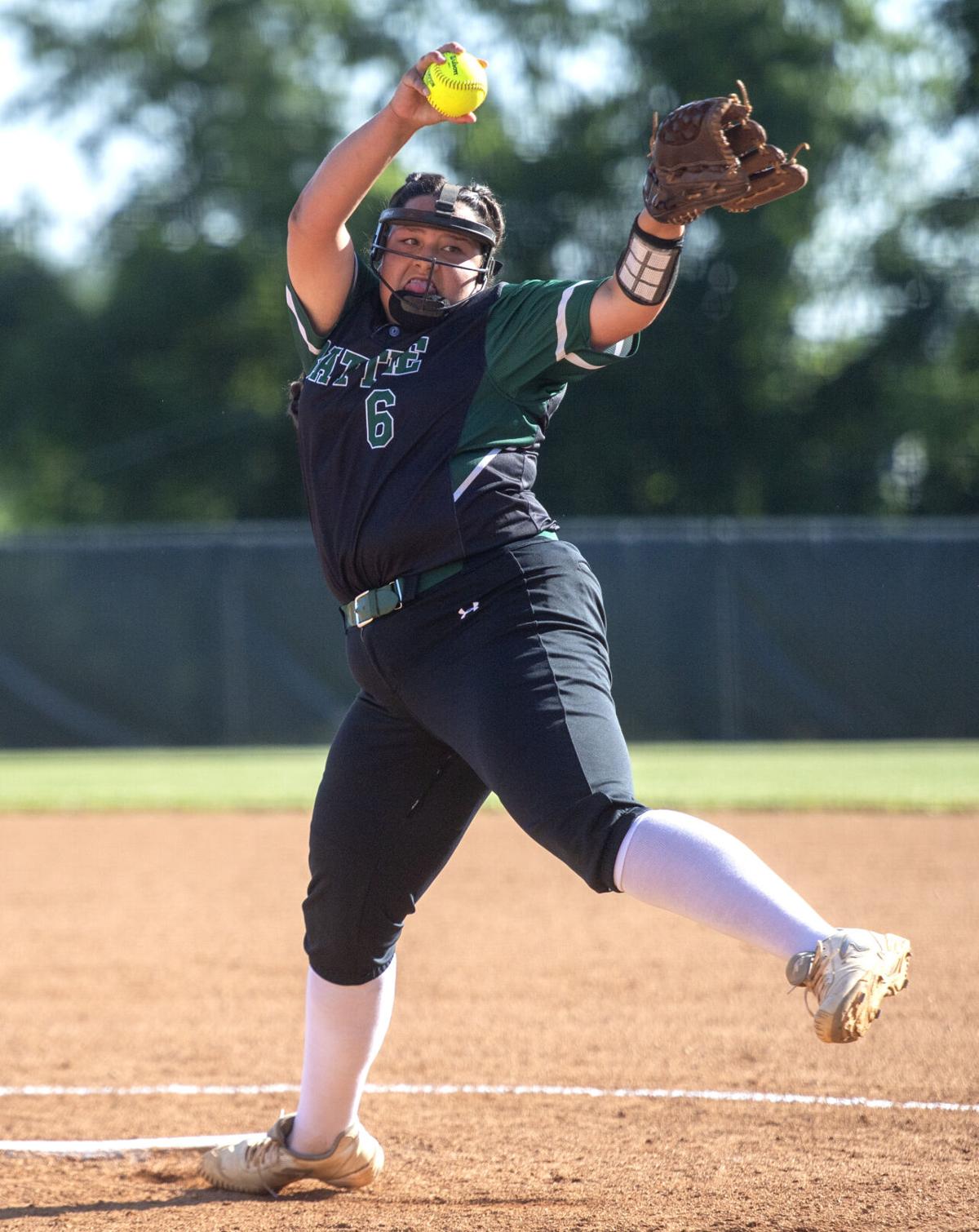 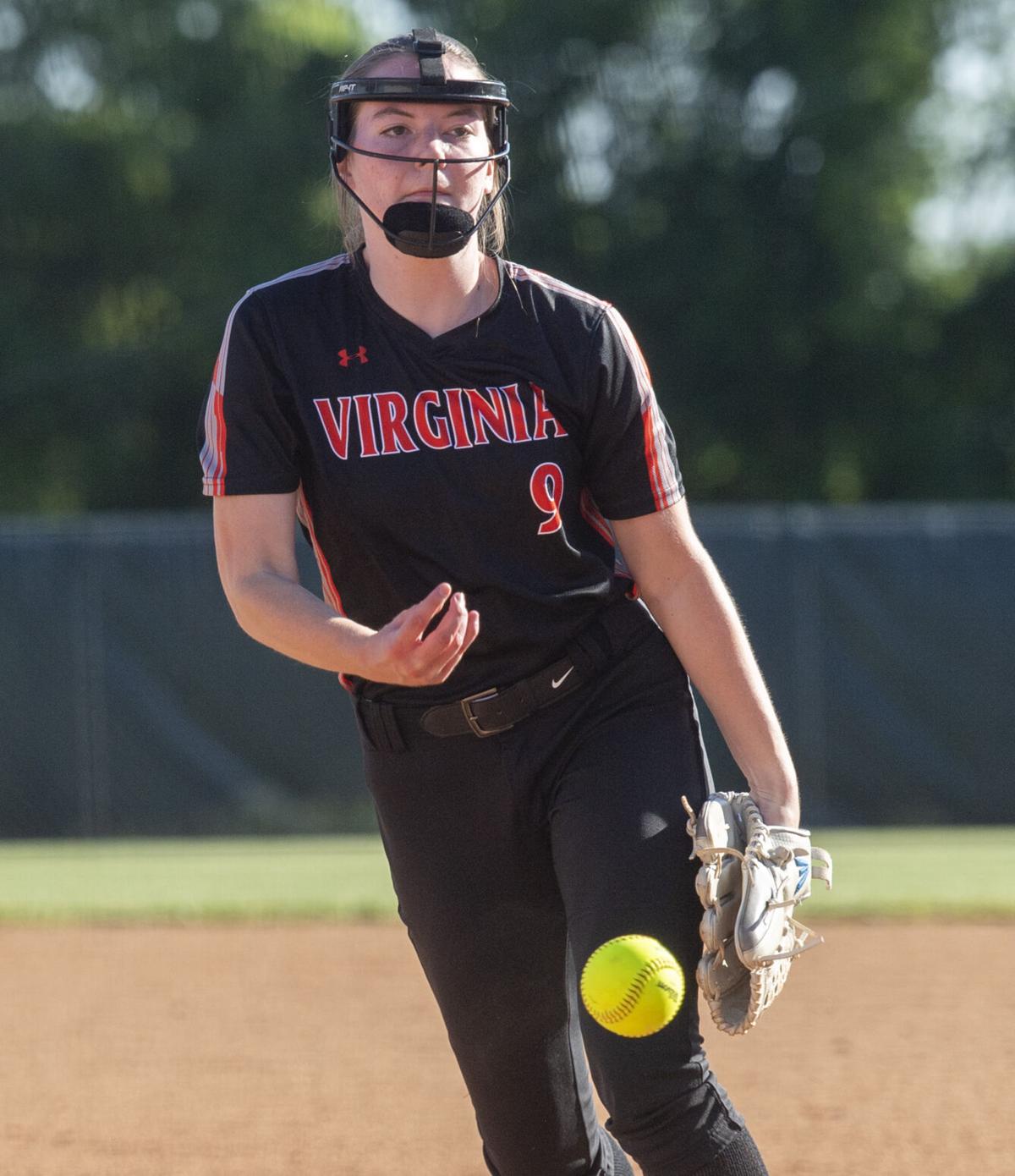 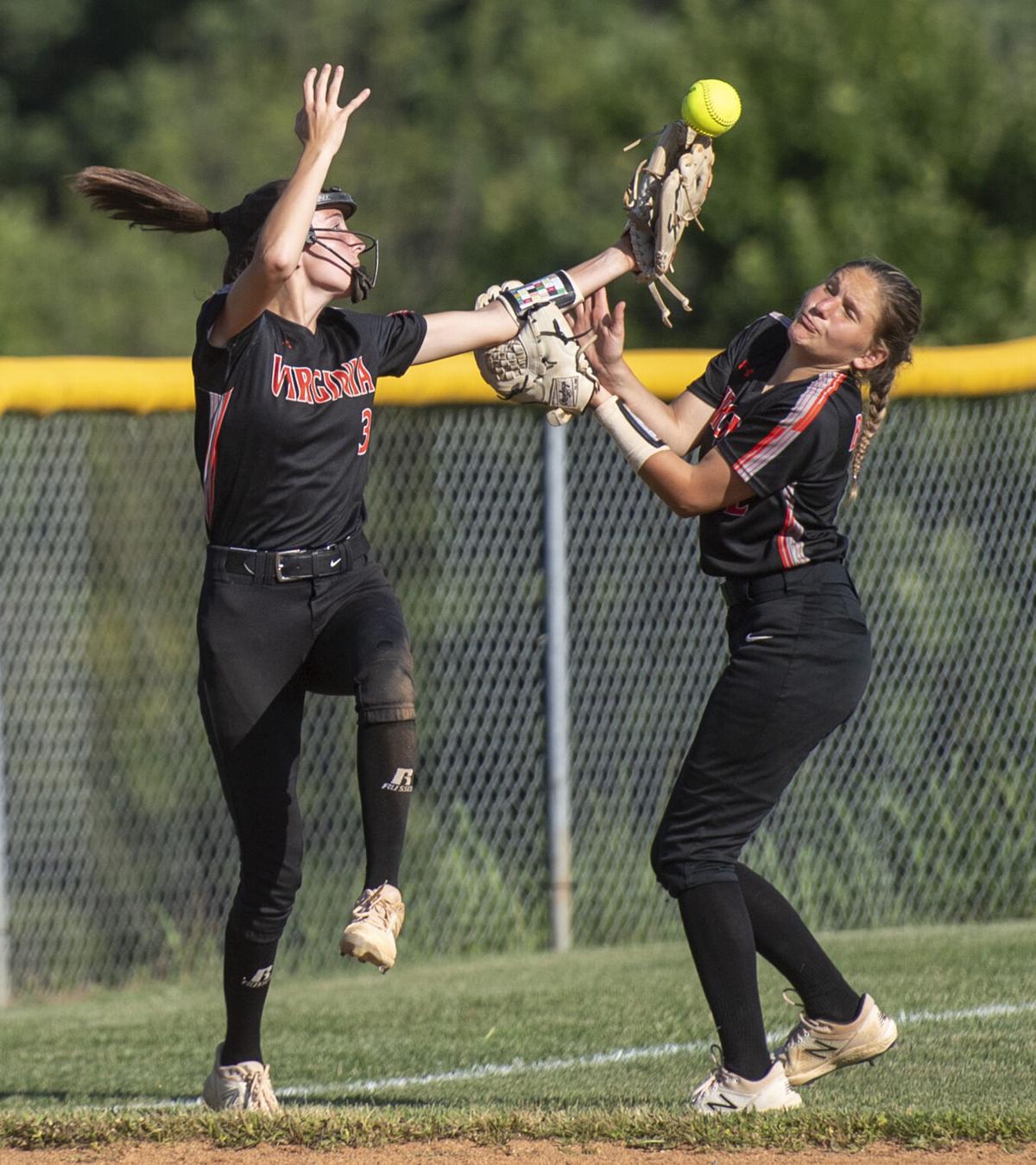 VHS's 3rd baseman Aidan James and SS Carrie Patrick can not come up with a pop up down the line.

BRISTOL, Va. – What John Battle High School’s softball players feasted on for a pregame meal was not as important as what the Trojans had to chew on over the weekend.

“ I called it our piece of humble pie,” said Battle coach Hannah Light Cress. “A loss before regions was not a bad thing for us.”

John Battle didn’t just bounce back from its first loss of the season, the Trojans blasted back from that initial defeat, connecting for three home runs in an 8-5 victory over the Virginia High Bearcats on Monday in the first round of the VHSL Region 2D tournament.

After suffering a 4-2 setback to Ridgeview on Friday in the title game of the Mountain 7 District tourney, Cress was anxious to see how her team would respond.

“ They came in at 10 o’clock this morning to hit and I could tell it was a different attitude and a different mentality,” Cress said. “They were ready.”

Wallace slid three sports down the order from her regular leadoff position.

“ We wanted to mix some things up,” Cress said. “She has a really strong stick and we wanted to see what she could do with runners on.”

How did Wallace respond when seeing her name written in the No. 4 hole on the lineup card?

“ We have a lot of power hitters on this team, so I felt a little nervous being in that spot,” Wallace said. “That encouraged me to hit better though to fill that role and that [Cress] trusts me enough to do it.”

After grounding out in her fast at-bat, Wallace ripped a two-run double in the third inning that gave Battle a 4-1 lead.

“ I usually don’t hit the first pitch,” Wallace said. “I like to get deep in the count and work the pitcher. Coach has been preaching a first-pitch mentality and that’s what I did when I got an early pitch to hit. It worked out pretty well for me.”

Wallace added a fourth-inning single. She, McReynolds, Roulett-Wheeler, Logan Leonard and Ellie Keene each had two hits for Battle with McReynolds’ homer in the first inning being her ninth of the season.

However, VHS (7-7) never let the Trojans get completely comfortable and trailed just 6-5 after batting around and scoring four times in the top of the fourth inning.

“ I challenged them this morning to come out and compete every single pitch and I feel like we did that,” said Virginia High coach Andrew Belcher. “I don’t think many people gave us a chance of even being in the game, let alone having a chance to win. I’m extremely proud of my bunch. They gave me everything they had today.”

Senior Harley Holmes went 3-for-4 to lead the way in her final game for the Bearcats, while Aidan James had two hits and Jayden Kilinski hit a two-run single. VHS made some progress this season under Belcher, who took over at the helm following the 2019 season.

“ I’ve got six sophomores in the lineup and two freshmen,” Belcher said. “I’m gonna miss the seniors for sure, but I think we laid a foundation for our program to continue getting better in the years to come.”

As for Battle, the refocused Trojans will face a quality Central team that they edged 9-8 and 3-2 in the regular season.

“ Central’s a good ball team,” Cress said. “They can hit, they’re well-coached and have been playing together for a long time. My kids know they’ll have to bring it.”

“It is sweet to finally get a win over Honaker and get that monkey off our back,” Eastside coach Mike Rhodes said. “I thought my kids executed in every facet of the game really well. Offensively and defensively, we played hard and played our assignment football.”

PREP FOOTBALL: Ridgeview rolls past Grundy in moving to 3-0

PREP FOOTBALL: Emotions will run high as Tennessee High returns to gridiron after death of student

Both Tennessee High and David Crockett are mourning the losses of beloved individuals who died last Sunday. They will meet tonight for a football game in Jonesborough with hopes to giving both communities reason to smile.

Mickey Rogers, the star running back on Gate City’s 1974 VHSL Group AA state championship football team, died on Wednesday at the age of 64.

The legend of Kyle Larson continues to grow.

No name-calling, personal insults or threats. No attacks based on race, gender, ethnicity, etc. No writing with your caps lock on – it's screaming. Keep on topic and under 1,500 characters. No profanity or vulgarity. Stay G- or PG-rated.
1 of 10

John Battle's Jordan Roulette-Wheeler, right, is greeted by her teammates after hitting a home run.

John Battle's Logan Leonard and the Trojans saw their season end with a loss to Wise County Central on Wednesday night.

John Battle's Charleigh Gobble connects on a pitch for a home run against VHS.

John Battle's Hannah Jo McReynolds is greeted by head coach Hannah Cress as she rounds 3rd base after hitting a home run.

VHS's 3rd baseman Aidan James and SS Carrie Patrick can not come up with a pop up down the line.