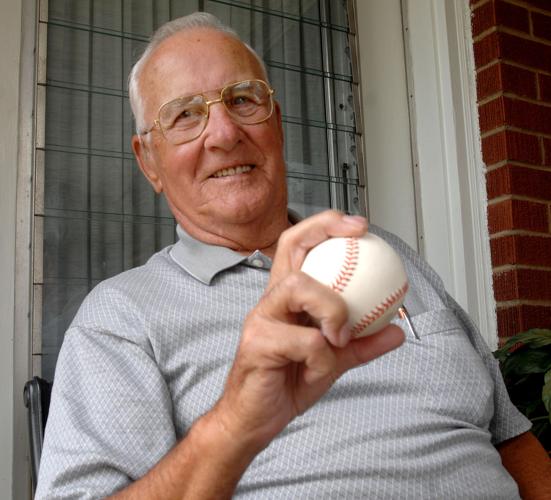 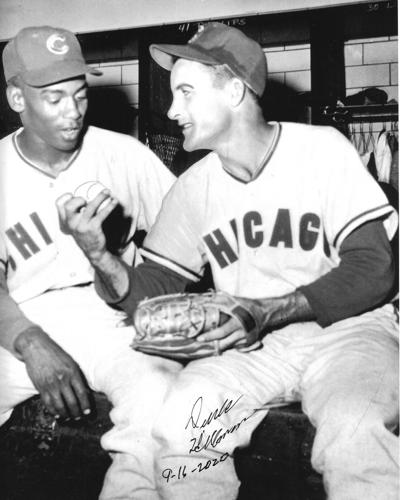 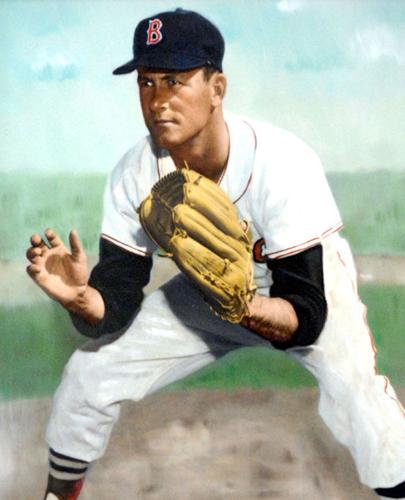 Dave Hillman pictured during his time with the Boston Red Sox. 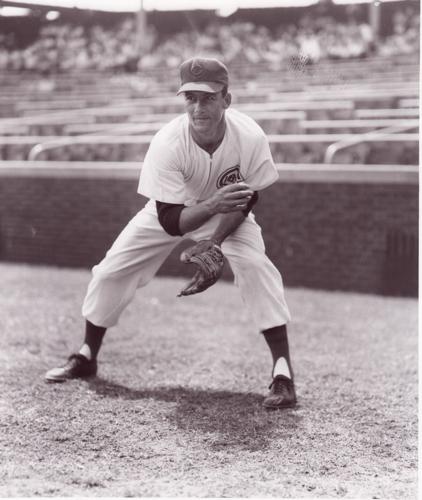 Dave Hillman, who traveled a unique path from Dungannon, Virginia, to Major League Baseball pitching mounds, died Sunday at the age of 95.

Hillman had been at the Brookdale assisted-living facility in Kingsport, Tennessee, since the first of May and passed away from natural causes.

The right-hander compiled a 21-37 record with three saves and a 3.87 ERA in a 188-game MLB career that spanned from 1955-1962 and featured stints with the Chicago Cubs, Boston Red Sox, Cincinnati Reds and New York Mets.

“The best way to describe Dave would be as a hard-luck pitcher on bad-luck teams,” Gaylon Hooper White, a baseball author/historian and a longtime friend of Hillman’s, said. “His record is really deceiving.”

Still, Hillman treasured his time pitching on the game’s highest level during a golden era of the sport.

“I can’t explain the excitement and the thrill of being there and making it,” Hillman said in a 2008 interview with the Bristol Herald Courier. “I was lucky.”

Prior to his death, Hillman was the oldest living New York Mets and Cincinnati Reds player.

His stint in the majors was memorable as he had a locker next to the legendary Ernie Banks at Wrigley Field, played for the inaugural edition of the New York Mets managed by Casey Stengel, faced Jackie Robinson of the Brooklyn Dodgers in his MLB debut and struck out 18 men who were eventually enshrined in the Baseball Hall of Fame, including such icons as Hank Aaron, Willie Mays and Stan Musial.

“As a pitcher Dave wasn’t a real big boy [5-foot-11, 168-pounds], but his fastball was deceptively fast,” said John Pyecha, who played with Hillman in the minor leagues. “He was a good pitcher with good control and was just steady. He was the same Dave day in and day out, on the mound and off the mound.”

Born Darius Dutton Hillman on Sept. 14, 1927, in Scott County, Virginia, he gained the name Dave as a small child when he became enthralled by the performances of Grand Ole Opry star Uncle Dave Macon.

While he was nicknamed after a famous banjo picker, his true passion was baseball.

Gas rationing in World War II led high school baseball to mainly be an intramural activity at the time, but Hillman found success on Southwest Virginia sandlots and semi-pro leagues.

It was while pitching for Lonesome Pine League’s Coeburn Blues that he attracted the attention of a scout from the Chicago Cubs, who inked him to a contract. He began his professional career in the summer of 1950 with the Rock Hill Chiefs of the Class B Tri-State League.

Five years later, he would make his MLB debut for the Cubs at 27-years-old against the Brooklyn Dodgers at Wrigley Field.

“Those days when you came up through the minors,” Pyecha said. “There were a lot of steps to climb.”

Manager Stan Hack summoned Hillman from the bullpen on April 30, 1955 to begin the seventh inning with the Cubs trailing 5-2 in front of what was left of a crowd of 10,011 spectators in the cozy ballpark.

It didn’t take long for Hillman to receive his “Welcome to the Big Leagues” moment against a squad that would win the World Series a few months later.

“The first batter I faced was Roy Campanella and he hit a line drive back up the middle and through my legs for a single,” Hillman said in a previous interview with the Bristol Herald Courier. “A couple of batters later, Jackie Robinson hit a hanging curveball into the left-field bleachers for a two-run homer.”

That prompted a visit from catcher Clyde McCullough.

“[He] ran out to the mound and grabbed my arm. ‘Dave, do you remember how you held that ball?’ Hillman recalled McCullough asking in a 1959 interview with the Kingsport Times-News.

“Well, by dammit don’t hold it that way again,” McCullough cracked to the newcomer.

Hillman pitched in 25 games as a rookie for the Cubs.

Plagued by soreness in his right shoulder, he began the following season with the Triple-A Los Angeles Angels of the Pacific Coast League. It would be one memorable summer.

“The Angels were a conglomeration of mostly Cubs rejects and castoffs, but there in L.A. they jelled that one year and won 107 games and took the pennant by 16 games,” White said. “Many people consider them the last great minor league team. They just dominated the league.

Hillman put together the best campaign of his MLB career during the 1959 season when he went 8-11 for the Cubs with a 3.53 ERA in 39 appearances, 24 of which were starts.

“He very easily could have won 15 games,” White said.

On May 6, he tossed a complete-game two-hit shutout against the Pittsburgh Pirates at Forbes Field.

Three weeks later, there was a dominant relief effort against the Los Angeles Dodgers at the L.A. Coliseum. After Chicago starter Seth Morehead failed to get out of the first inning, Hillman entered and proceeded to mow down the Dodgers. He struck out 11 in 7 2/3 innings en route to earning the win. At last check, the 11 K’s are still the most by a Cubs reliever in team history.

“I have never felt better in my life as far as throwing was concerned,” Hillman said in that 2008 interview. “I just felt great.”

In the offseason following his strong showing in the Windy City, the Cubs dealt Hillman and first baseman Jim Marshall to the Boston Red Sox for Dick Gernert in what was the first interleague trade without waivers in MLB history.

He played for three teams over his final four seasons, including with the woebegone 1962 Mets.

Finishing with a mark of 40-120, the hapless expansion team is considered one of the worst teams in professional sports history.

“It was a joke – the ballplayers they had assembled,” Hillman said 14 years ago. “It was all old players who were over the hill. There were one or two young pitchers that were good, but with the ballclub, they couldn’t get them a run.”

Hillman wasn’t spared from the misfortunes that surrounded the Mets that season.

“We were flying from Milwaukee to Houston,” Hillman said. “We had plane trouble and we didn’t get out of there until [midnight] Sunday night. We got on the plane and had to land in Dallas, because Houston was fogged in. We didn’t get out of Dallas until around 5 a.m. to fly into Houston after the fog lifted. All that time we hadn’t had a meal and hadn’t closed our eyes. Come to find out after we got into Houston at 10 a.m., I was the starting pitcher that night.”

He allowed two runs in 2 2/3 innings in a no-decision.

His last MLB outing came on June 22, 1962, for the Mets in a game against the Houston Colt .45s at the Polo Grounds. He retired the final batter he faced, getting Bob Lillis to fly out to center field for the last out of the fifth inning.

He worked for more than 30 years at Fuller & Hillman clothing store in Kingsport after his playing days were done.

A soft-spoken gentleman, Hillman always took time to talk to sports writers who frequently called him to inquire about those halcyon days wearing a big-league uniform.

In his final interview with this newspaper in 2020 – on his 93rd birthday – he was asked about the secret to his longevity.

“With the help of almighty God upstairs,” Hillman said. “That’s the only help you need.”

Hillman is survived by a daughter, Sharon Hillman Lake, who lives in Portland, Tennessee.

“Growing up, I really did not realize what the big deal was,” Sharon Hillman Lake said in a 2020 interview. “It was just part of our lives – dad’s gone, dad’s playing baseball for seven months out of the year. I tell my friends to this day that I had a wonderful childhood.

“Mom [Imogene] and dad gave Ron [Hillman] and I everything we needed. Not what we wanted, because we were not privileged in any way. … Dad loves talking about baseball, but he is really a humble man.”

A man who will be greatly missed by those who knew him.

“Dave and I palled around quite a bit,” the 90-year-old Pyecha said via telephone from his home Monday afternoon. “He was a very pleasant guy and easy to get along with; just a wonderful teammate and a wonderful guy.”

Dave Hillman pictured during his time with the Boston Red Sox.