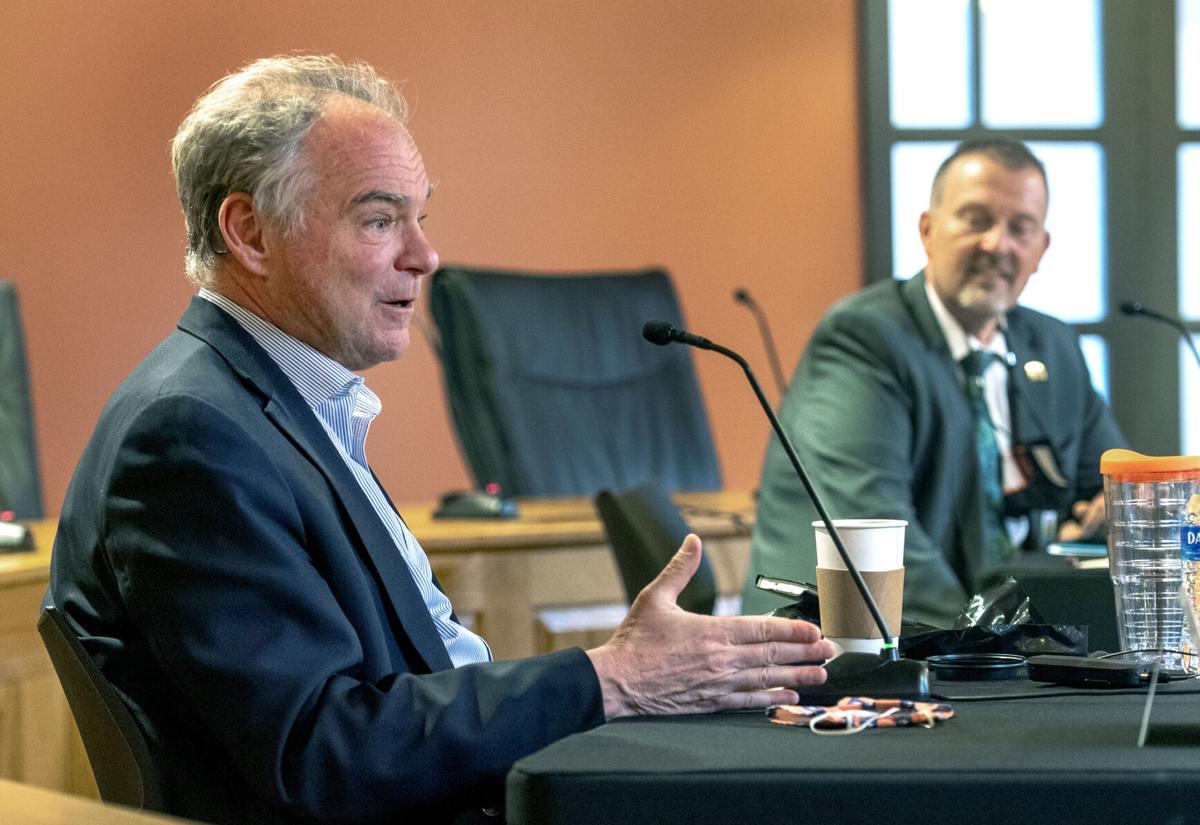 With Bristol Virginia School Superintendent Keith Perrigan looking on, U.S. Sen. Tim Kaine (D-Va.) talks with superintendents and school board members from across Southwest Virginia to discuss how to ensure schools are COVID safe and other crucial infrastructure needs for our education institutions. 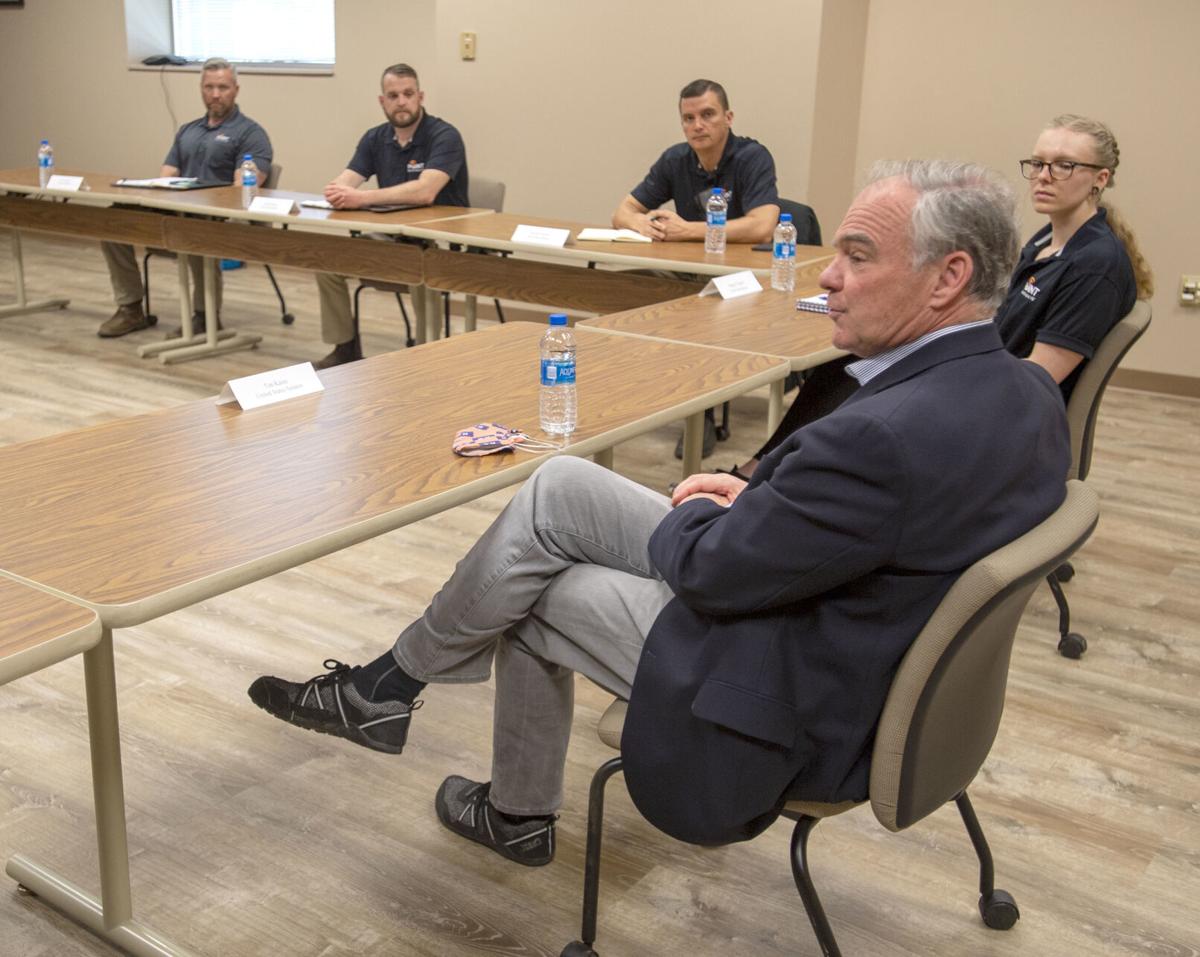 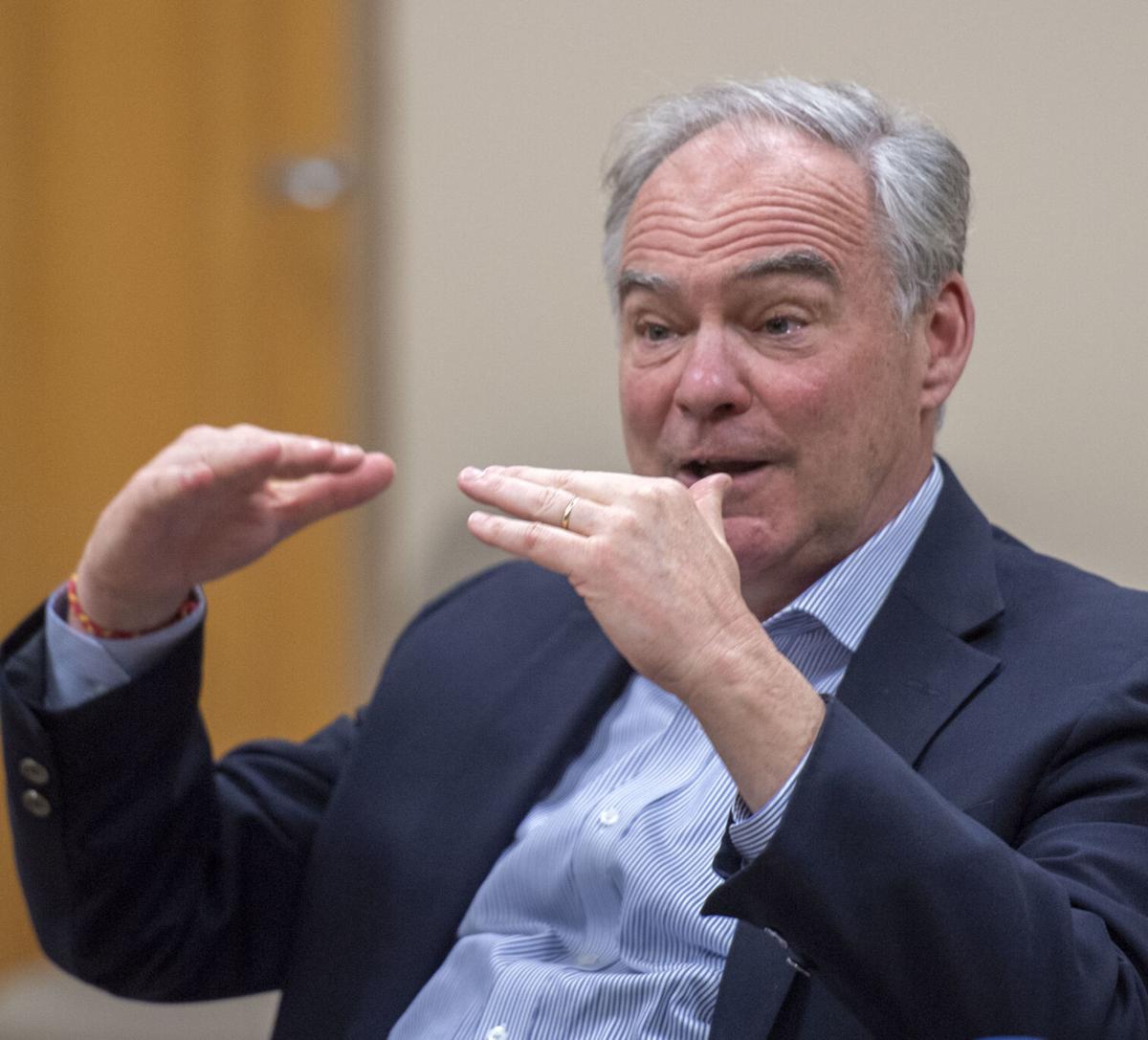 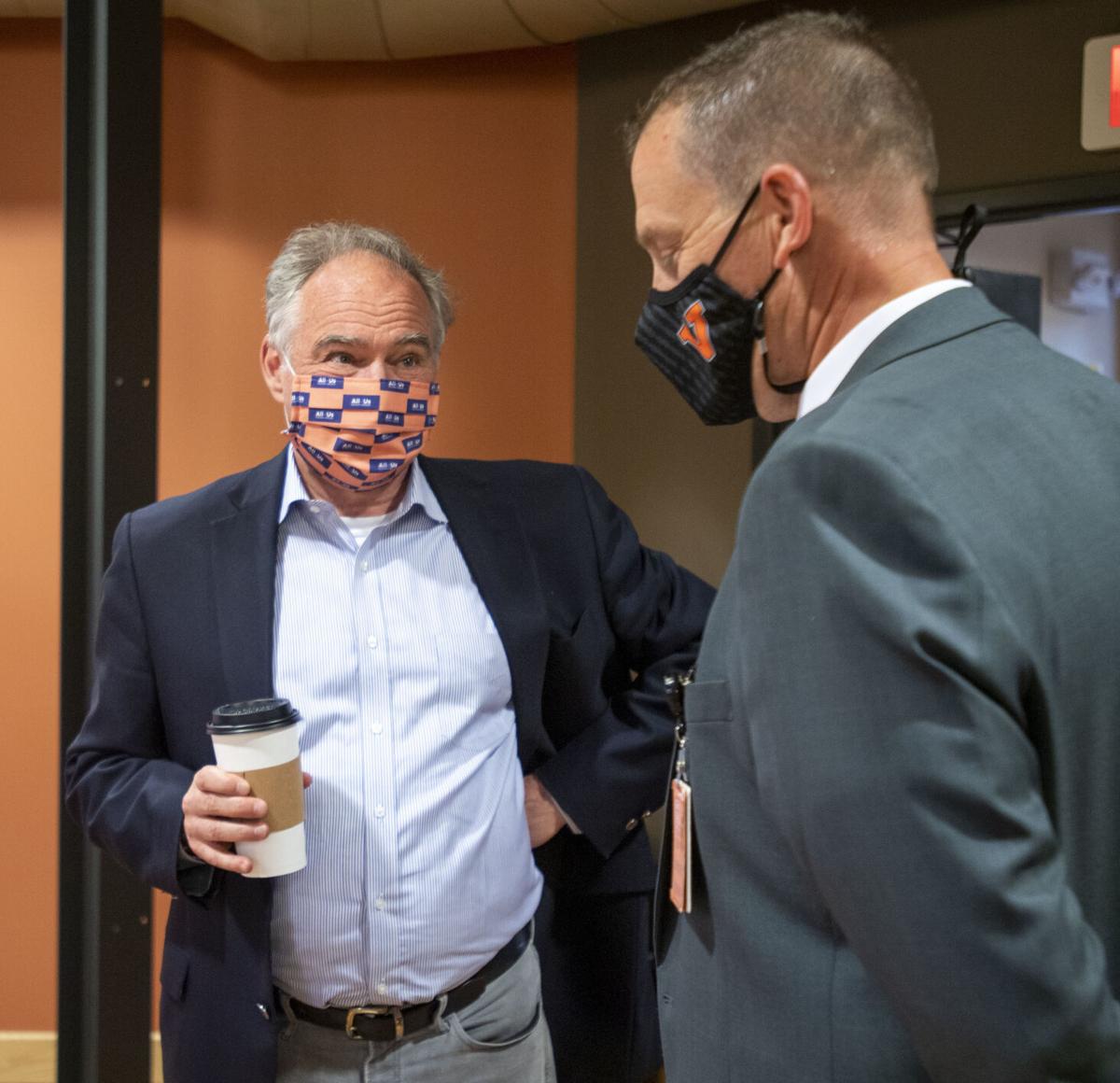 Kaine met with a group of broadband providers Thursday afternoon — discussing their concerns and seeking suggestions on how to best fund service gaps in hard-to-reach rural areas. He later spoke with school superintendents and school board members about how the infrastructure bill could aid in areas like school construction and renovation.

The stops were part of a statewide fact-finding trip.

“I think we’re going to put a lot of money into broadband. I just want to make sure it’s spent right,” Kaine said. “I would say the best takeaway was the suggestion — as you’re allocating broadband funds — don’t just allocate dollars to states. What about an allocation to the Appalachian Regional Commission?

“The mountainous nature of Appalachia makes the telecom connectivity issue tougher. Given that ARC is set up, has a good track record and is well respected, that might be a really good way to allocate money to a trusted organization with a guarantee it would get to some of our high need population,” Kaine said.

Kaine called the infrastructure bill, the “big opportunity” because it will likely include a “dramatic” investment in broadband infrastructure.

“We’re very happy with our partnership with Point. They’re a company working to provide service to our underserved areas — areas that are tough to get to,” Baldwin said. “We’re up the hollers to reach people.”

A $16 million award “parlayed itself” into a $45 million project, Baldwin said.

“We put skin in the game, and that’s a model that we hope to take into the future,” he said. “Eventually, it gets to the funding and the ability to put together public and private partnerships to get things done.”

They also urged Kaine to simplify the process for unlocking those funds to get them into projects sooner.

While the senator said he expected to hear about broadband concerns from educators, much of that discussion centered on making sure the bill includes funds for school construction or renovation.

“These superintendents have significant renovation needs and they have to wait year after year or decade after decade to do repairs,” Kaine said. “We have an opportunity to do something really big and help Virginia schools with renovation and construction.”

Bristol Virginia Superintendent Keith Perrigan outlined the city’s current quandary — with plans to close three aging elementary schools and consolidate them into one or two other sites.

“They’re not handicap accessible, they’re multi levels, they’re full of asbestos and we have issues with technology, water, electricity, in those buildings,” Perrigan said of the old schools. “One of the problems we had is our city really doesn’t have the capacity to do that on our own. … 2009 was the last year we received state funding for school renovations, and we don’t get federal funds.”

Perrigan and other superintendents urged Kaine to streamline the process of awarding funds while asking for help in untangling some federal COVID-19 relief funds already awarded.

“We’ve been fully open, in person, since Aug. 20. We don’t have the challenges of getting schools open,” Perrigan said, outlining all the completed work funded by federal dollars. “If we could get some flexibility to use that for infrastructure or even property acquisition to build a new school, it would be a generational game-changer.”

Kaine is scheduled to remain in the region today with planned stops in Duffield, Pennington Gap and Jonesville.

JOHNSON CITY, Tenn. — Ballad Health announced a new agreement with a New York-based nonprofit firm on Tuesday that will eliminate $277.9 million worth of non-governmental payer medical debt for 82,000 people previously served by Ballad.

Developer seeks OK to build residential complex at The Falls

An Alabama developer plans to seek approval from the city of Bristol, Virginia to construct a large multi-family residential complex in the center of The Falls.

ABINGDON, Va. — Abingdon Mayor Derek Webb predicts that next Father’s Day — a year from now — the town’s long-awaited sports complex will be a…

BRISTOL, Tenn. — The Tennessee Valley Authority has mapped out the preferred locations for just over 14 miles of new power lines it’s planning to build in the Bristol area, the company announced Monday.

Actor Ned Beatty, who died this week, had ties to Barter Theatre

Bristol chief search down to 3 finalists

The search for Bristol, Tennessee’s next police chief continues as three people — out of more than 100 applicants — complete interviews with the city’s senior management.

After years of dedicated effort from local leaders, including the late Virginia state Sen. Ben Chafin, a state park winding the length of the Clinch River finally opened on Wednesday. Among the 100 guests in attendance was Virginia Gov. Ralph Northam, who praised the hard work from a delegation of Southwest Virginia officials and local residents that made the Clinch River State Park possible.

ABINGDON, Va. — Reed Jones was sitting in calculus class at Abingdon High School this spring when he got the surprise of a lifetime.

A law that bans masks will be back in effect in July. Civil rights advocates say conflicting guidance could lead to dangerous interactions with police.

By the end of the month, Virginia will no longer be under a state of emergency due to COVID-19, and as a result, a state law banning masks will go back into full effect.

With Bristol Virginia School Superintendent Keith Perrigan looking on, U.S. Sen. Tim Kaine (D-Va.) talks with superintendents and school board members from across Southwest Virginia to discuss how to ensure schools are COVID safe and other crucial infrastructure needs for our education institutions.