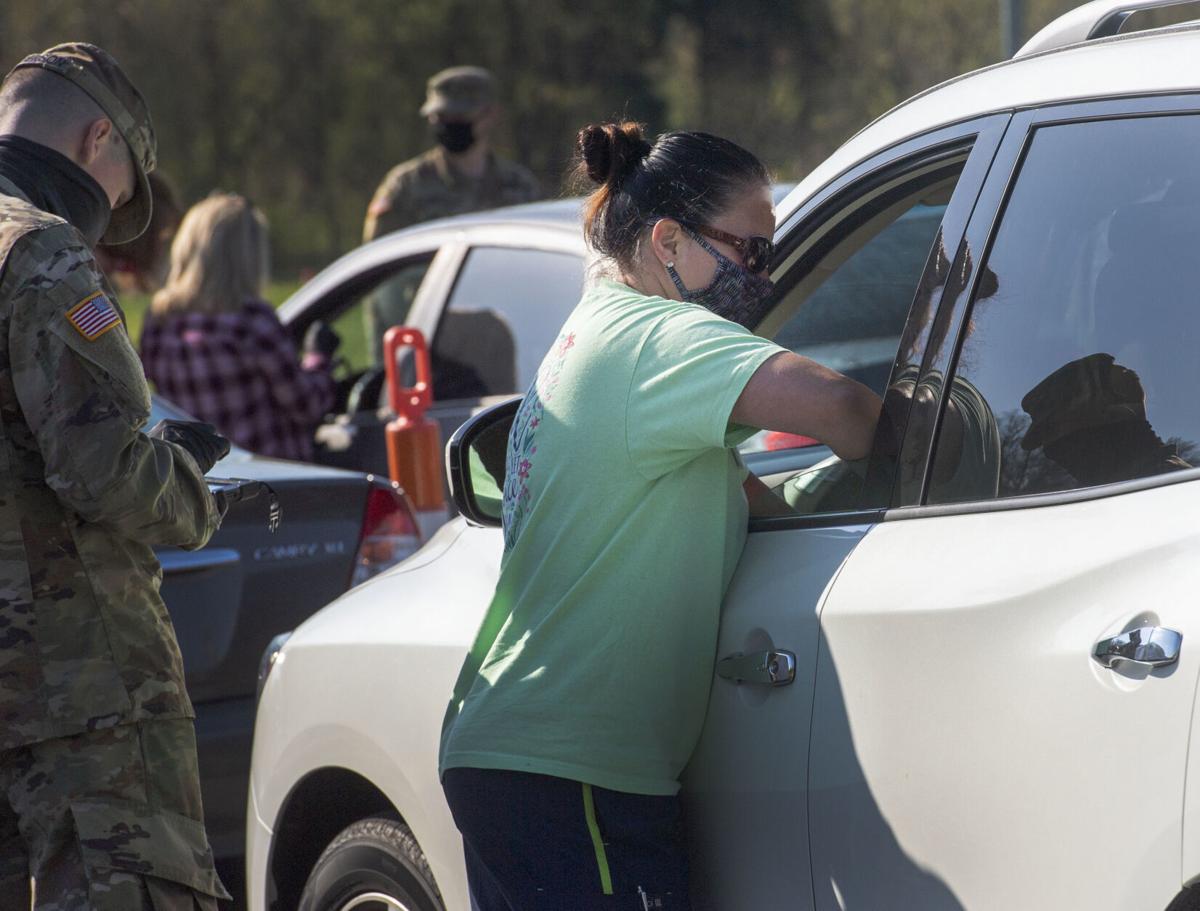 Bobbie Pendleton with the Sullivan County Health Department gives a shot to a resident during Wednesday's vaccination clinic at Whitetop Creek Park in Bristol. The health department started the three day "mass vaccination" event that will run from 9 a.m. - 7 p.m. through Friday. 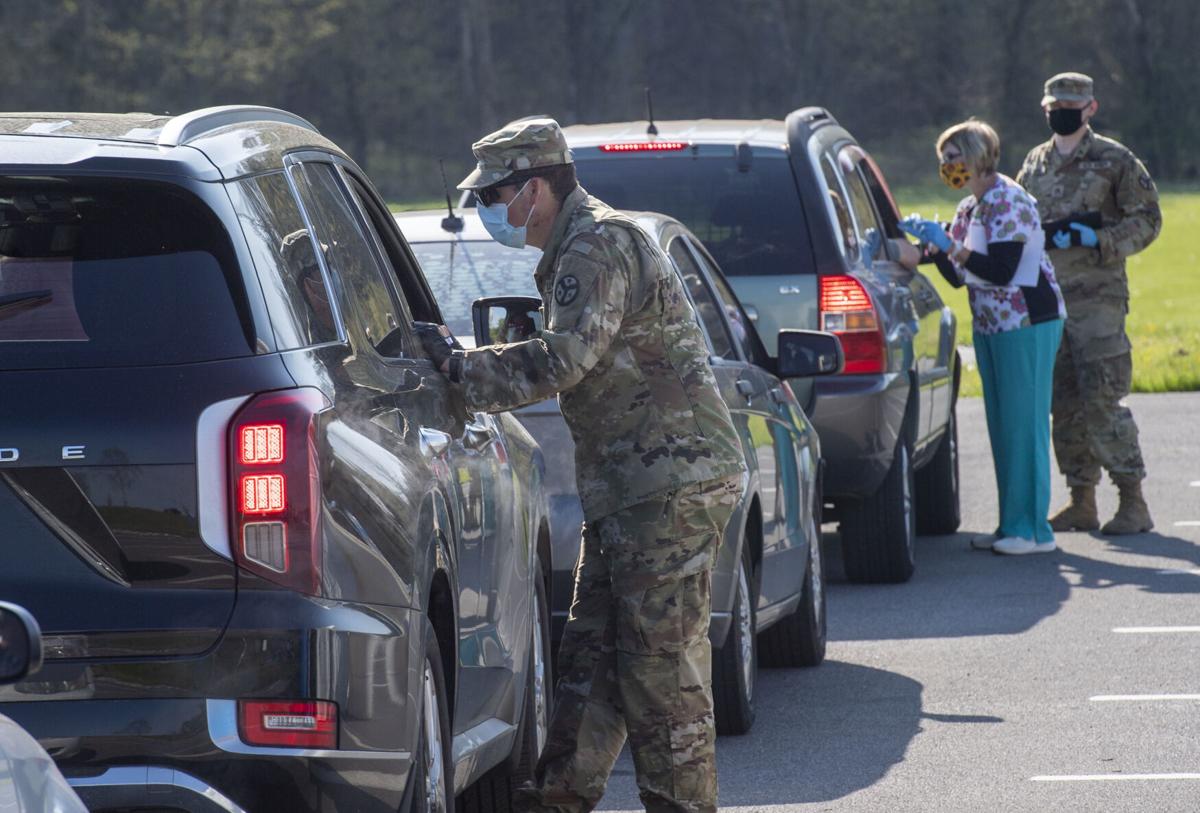 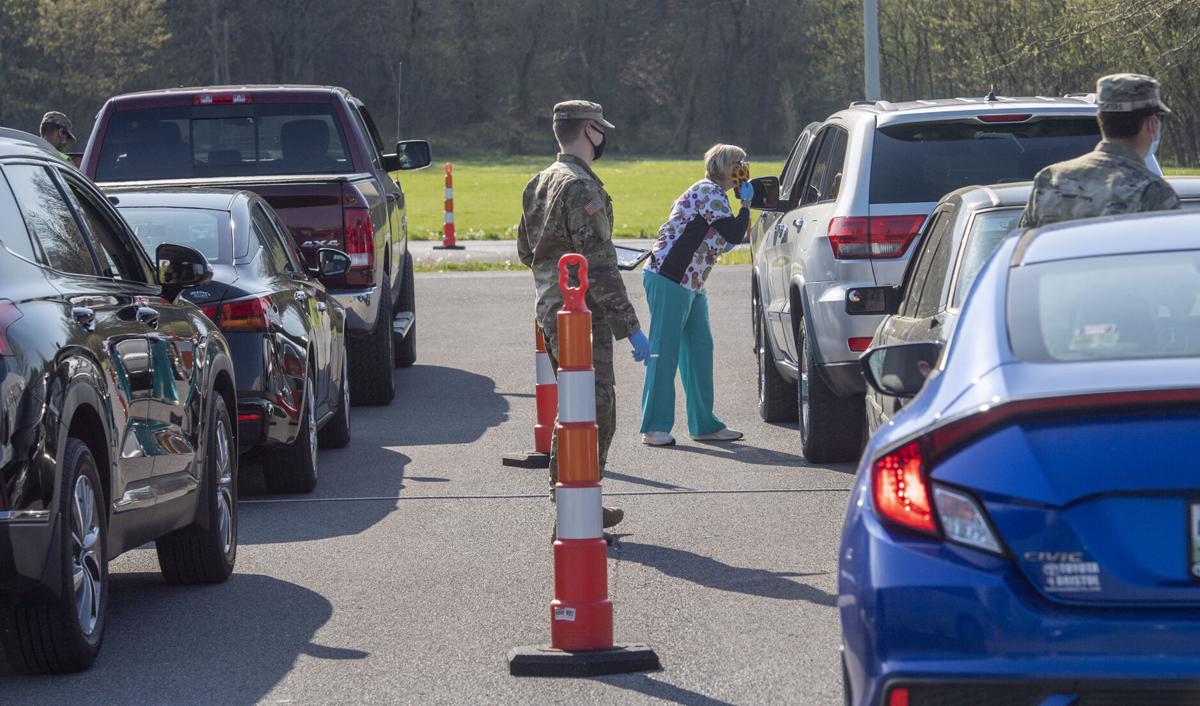 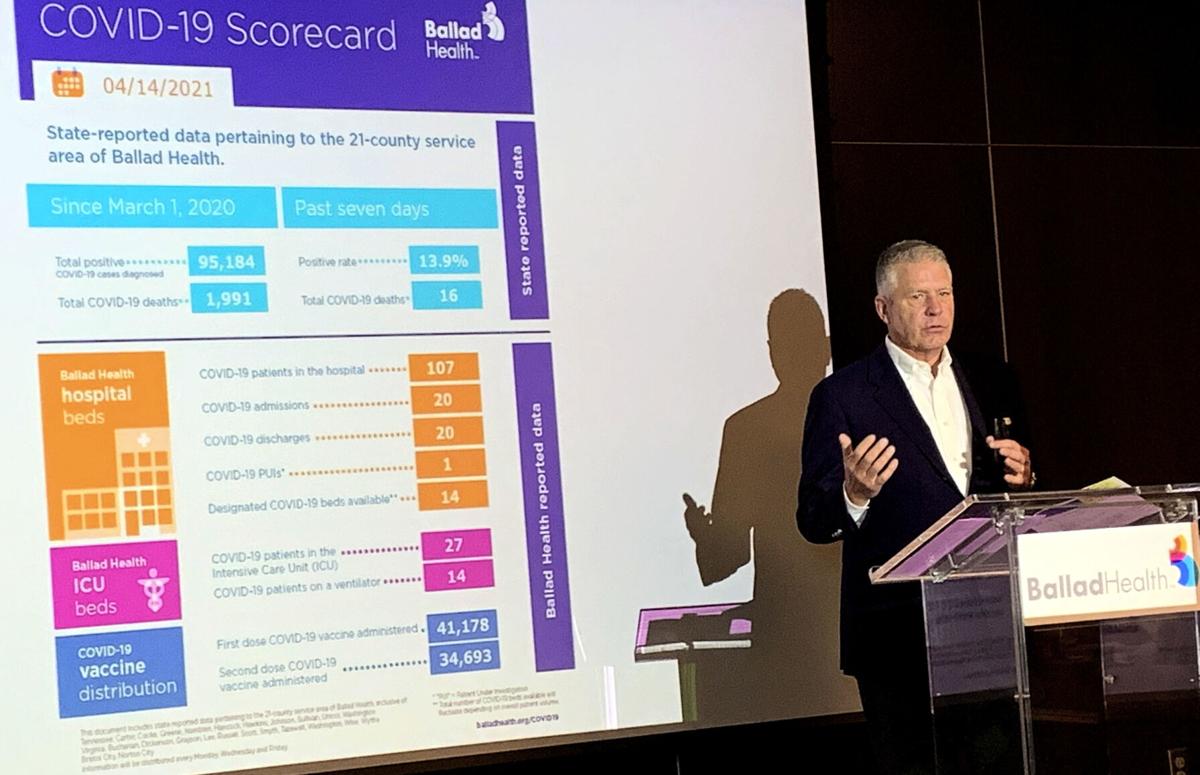 JOHNSON CITY, Tenn. — A more aggressive strain of COVID-19 and relaxed behaviors are being blamed for “dangerous” rises in cases and hospitalizations across this region, Ballad Health officials said Wednesday.

The local hospital system is presently caring for more than 200 COVID-positive patients who are — on average — younger and sicker than the record surge of cases last winter, Chief Operating Officer Eric Deaton said during a news briefing.

“Last week, for the first time since February, our number of COVID-19 inpatients rose above 100 and it’s remained that way,” Deaton said. “Our average age of COVID inpatients today is 58 years old; it was age 67 in 2020.”

A fourth of the inpatients — 27 – required treatment in intensive care units with 14 on ventilators. Deaton said those percentages are also higher than during the previous surge.

On Wednesday, Ballad reported 107 inpatients and 100 less severe cases being treated through its “Safer at Home” program. The home care program had declined to about 30 patients, so today’s figure represents a 233% increase. The inpatient census had declined to about 65, so current cases represent a 64% increase. There were 20 new admissions Wednesday.

There have been 16 COVID deaths across the region during the past seven days and 24 this month. The region is rapidly approaching 2,000 COVID deaths since the pandemic began.

Asked by reporters about evidence of variant strains, Deaton said they “believe” the current strain is more aggressive, but they don’t yet have clinical proof of a variant. Ballad is working with local health departments to test wastewater — which can show evidence of different strains of the virus.

“I do believe some of this is behavioral; spring break trips, fewer people wearing masks; people letting their guard down. We also believe there are more contagious strains out there that we’re starting to see,” Deaton said.

Reports of new regional cases declined steadily through January and February, but climbed during the past five weeks. There were over 1,400 new cases across Ballad’s service area last week — the highest total since early February — and more than 2,000 during the first two weeks of April.

“We have a lot of undiagnosed spread in the community,” said Jamie Swift, Ballad’s chief infection prevention officer. “We may have people who choose not to be tested, who may attribute their symptoms to other things such as seasonal allergies. If you have any symptoms, while we know we have this spread in our community, go be tested. There are lots of testing access sites throughout our system.”

While Ballad is preparing to treat more patients, officials say they’re not yet ready to pause elective surgeries and other procedures, as happened twice during 2020 and early 2021. The 107 inpatients represent about 10% of Ballad’s 1,100 inpatients systemwide.

“The modeling shows that we could go back up over 150 inpatients. During the last surge, when we hit 20% capacity of inpatients being COVID-positive, we had to pause elective procedures and surgeries. At this point we’re around 10%. At this point, we feel like we have capacity, and based on our modeling we don’t feel like we’ll need to pause elective procedures; but that’s just modeling, it’s not perfect. We’re keeping a very close eye on it.”

Northeast Tennessee’s most populous counties — Washington and Sullivan — remain hotspots for the virus. Both counties added an average of 39 new cases daily over the past two weeks, according to the Tennessee Department of Health and the seven-day testing positivity average was 16.9% — ranking both among the highest in the state.

Combined, they have nearly 1,000 active cases after adding a combined 465 new cases during the past seven days.

The regional positivity average has remained around 14% throughout April. It was 13.9% Wednesday while Tennessee’s seven-day average of 6.7% and Virginia’s was 6.1%

More than 500 new cases were diagnosed during the past two weeks in the 10 counties and two cities of far Southwest Virginia, including 93 in the past seven days in Washington County, 56 in Tazewell County and 50 in Wythe County. Accordingly, the Mount Rogers Health District reported a seven-day testing positivity average of 12.1% compared to 5.8% in the LENOWISCO District and 4.5% in Cumberland Plateau.

Another surge, Deaton said, could “cripple” the health care system whose nurses and care providers are stressed following months of dealing with a flood of COVID cases.

“We are still asking people to wear a mask, wash your hands and do those things properly. Most importantly, we ask that you take the vaccine when you have the opportunity to do so,” Deaton said.

About 30% of this region’s population has received at least one dose of COVID vaccine and more than 20% are fully vaccinated. But that is far short of where the region needs to be, said Jamie Swift, Ballad’s chief infection prevention officer.

More than 477,000 doses of vaccine have been administered across Ballad’s entire service area and more than 195,000 people are fully vaccinated.

“We’re pleased with the progress, but we are far from over. We have a long road ahead of us in this vaccination effort,” Swift said. “If we are to prevent this further surge, if we’re ever to return to what normal life may look like, we have got to get this vaccine in arms as quickly as possible.”

Ballad continues to offer vaccination appointments until 8 p.m., plans to open a vaccination clinic in the Johnson City Mall next month and is planning another mass vaccination event at its facilities this Saturday. About 900 people took advantage of the last such opportunity, Swift said.

The region needs to get to 70% to 80% of its residents vaccinated to quash future surges, Swift said.

“So many people want this to be over and they want to go back to normal. The one thing I can tell them will get us there is this vaccine,” Swift said.

Former Trump attorney and self-proclaimed “Kraken releaser” Sidney Powell has told prospective donors that her group, Defending the Republic, is a legal defense fund to protect the integrity of U.S. elections.

The Dorseys are one of many families in the Twin City that have, in recent months, experienced an overpowering stench — both outside and inside their homes. Like other residents, they report experiencing health problems when the odors are present: burning eyes and throats, headaches, tightness in the chest.

Va. prison inmate wrongfully convicted of 1979 rape and in hospital with cancer is granted release

A man wrongfully convicted of a 1979 rape, exonerated by DNA testing and who is now seriously ill from cancer was released — much to his surprise — from the custody of the Virginia Department of Corrections on Monday.

When stay-at-home mom Leah Orr began renovating her turn-of-the century farmhouse, she invited thousands of people to take the journey with her. Leah has turned her passion for decorating into an Instagram page and a YouTube channel, where she shares with viewers her family’s ongoing progress with a fixer-upper in the country.

The ex-wife of a man shot and killed by a Bristol, Virginia police officer who was charged with murder last week is suing the officer in federal court.

Eastman Credit Union has announced the retirement of a long-time executive and promotions for a number of other officers.

Virginia Gov. Ralph Northam on Tuesday declared a state of emergency in Virginia because of gasoline supply disruptions caused by a cyberattack on a key East Coast fuel pipeline.

KINGSPORT, Tenn. — Jon Michael Mollish stood at the bow of a low fishing boat Wednesday afternoon, scanning the waters of a cove in Boone Lake…

Multiple Bristol-area gas stations ran out of gas Wednesday amid growing concern about a potential gas shortage stemming from a cyberattack on the nation’s biggest fuel pipeline.

Bobbie Pendleton with the Sullivan County Health Department gives a shot to a resident during Wednesday's vaccination clinic at Whitetop Creek Park in Bristol. The health department started the three day "mass vaccination" event that will run from 9 a.m. - 7 p.m. through Friday.