Local citizens attend a lunchtime rally outside the DEQ offices in Abingdon on Thursday in opposition to pipeline construction in Virginia. Leaders delivered a detailed letter of protest against the pipelines to officials at each DEQ office. 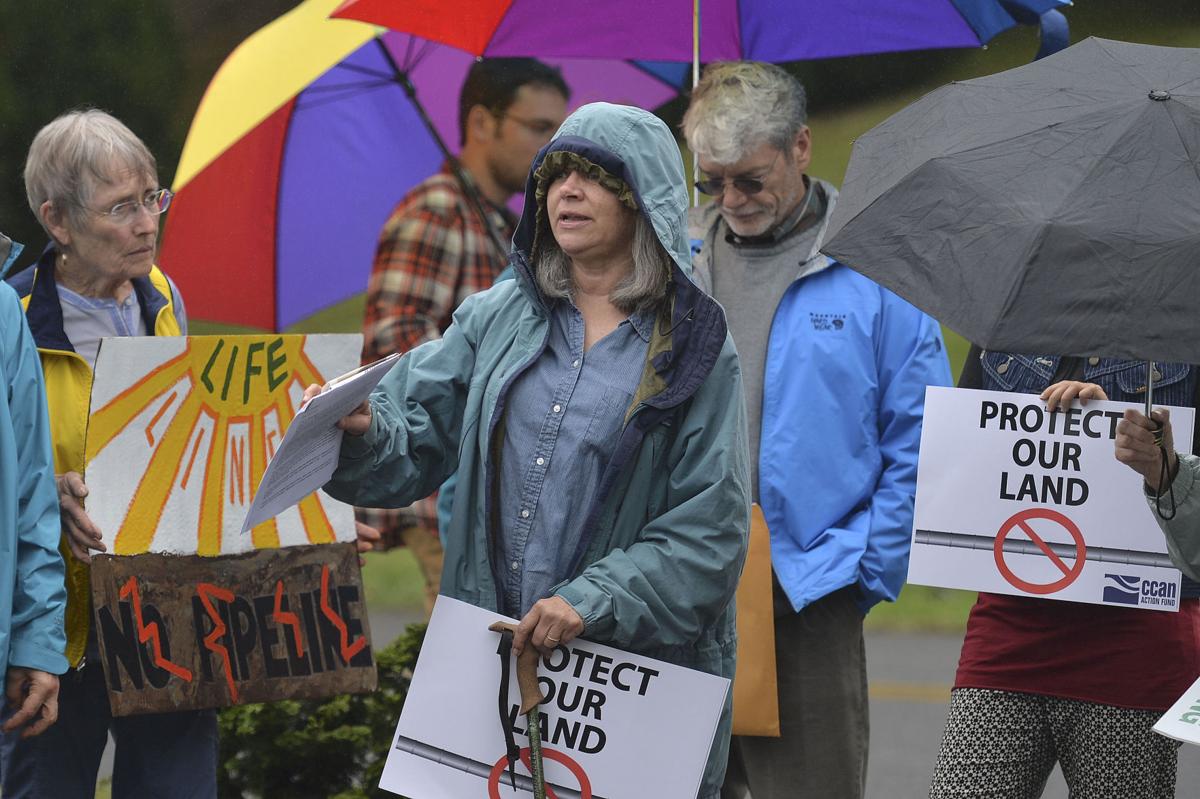 Karen Shaffer reads part of her letter to DEQ officials during a lunchtime rally in opposition of pipeline construction outside the DEQ offices in Abingdon Thursday. Leaders delivered a detailed letter of protest against the pipelines to officials at each DEQ office. 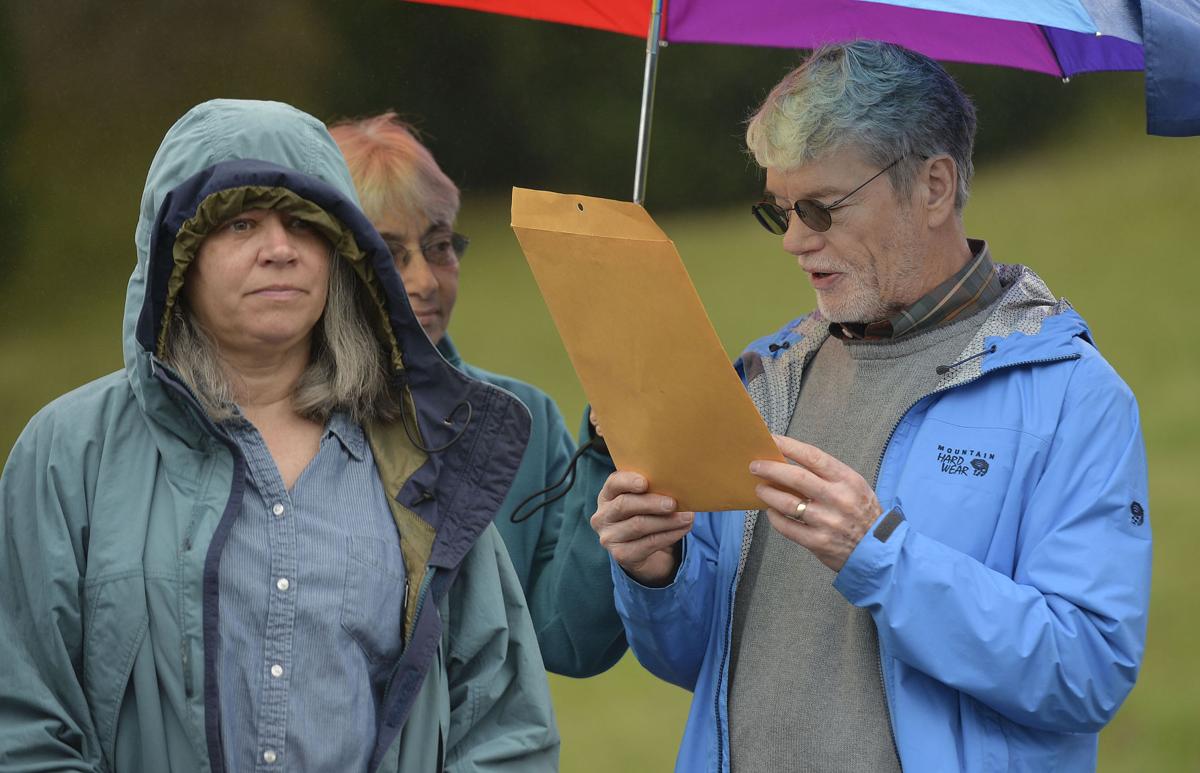 Rees Shearer reads part of her letter to DEQ officials during a lunchtime rally in opposition of pipeline construction outside the DEQ offices in Abingdon Thursday. Leaders delivered a detailed letter of protest against the pipelines to officials at each DEQ office.

ABINGDON, Va. — Bristol, Virginia, resident Karen Shaffer relies on the spring behind her home as her sole source of water, just like approximately 1,000 households in the area who use spring and well water exclusively.

With proposals to construct two major pipelines across the state of Virginia, Shaffer is afraid her water supply will be affected due to gas drilling.

It would be “nice if the governor [Virginia Gov. Terry McAuliffe] and the state had a plan in place to pursue renewable energy seriously,” Shaffer said. “We have a lot of wind, sun and water here. We can be the beacon for the other states.”

On Thursday, Shaffer and approximately 20 other members of the Washington County chapter of Virginia Organizing gathered at the entrance of the Abingdon office of the Virginia Department of Environmental Quality to oppose construction of the Mountain Valley and Atlantic Coast pipelines.

The group delivered letters opposing Gov. Terry McAuliffe’s administration’s pro-fracking and pro-pipeline policies. The demonstration was part of a statewide protest on the sidewalks of seven DEQ offices in Virginia. In Richmond, 19 protesters were issued summonses for blockading the door to the DEQ.

The Washington County group gave copies of their letter — and two personal letters from members — to Jeffery Hurst, regional director for the Abingdon office of the DEQ.

Hurst said the Abingdon office has no involvement in either pipeline project.

Virginia Organizing is a nonpartisan statewide grassroots organization. The group “brings people together to create a more just Virginia,” according to a news release.

The goal of the letter delivery was to ask McAuliffe to fulfill his responsibilities under the Clean Water Act.

According to the group's letter, the governor “has a responsibility under the Clean Water Act to require that the pipeline companies prove that their projects do not harm water quality." The letter calls on McAuliffe “to demand ‘site specific’ reviews” on how the two pipelines will affect statewide water quality.

The letter primarily focuses on the Mountain Valley Pipeline, a proposed 303-mile natural gas system that would span from West Virginia into Virginia. The group described it as a “disastrous project [that] would trigger extensive fracking in West Virginia while transporting this harmful gas through the mountains of Southwestern Virginia, endangering our region’s rural natural assets and character.” The letter also called attention to the potential “dramatic alteration of viewscapes along the iconic Appalachian Trail.”

The Atlantic Coast Pipeline is set to be 600 miles long and run through parts of North Carolina, Virginia and West Virginia.

But to the Washington County chapter, the Atlantic Coast Pipeline will “reap devastating impacts” across Virginia. In the letter, the chapter claimed that the pipeline would destroy approximately 38 miles of mountain ridge in Virginia and West Virginia.

DEQ’s central office had no comment about the rallies Thursday.

“The agency is now focused on reviewing the thousands of public comments during the 50-day comment period, which included five public hearings held around the state,” said Ann Regn, director of public information and outreach for the central office.

DEQ had sought out public comments regarding water quality certifications for the pipeline projects.

“We will prepare a summary and response documents to the State Water Control Board, our citizen board, regarding the public comments,” Regn said. “[The board] will accept the proposed certification, deny it or amend it.”

Rees Shearer, of Emory, delivered one of the personal letters, which focused on one of the four U.S. energy companies behind the project: Dominion Energy. The other three are Duke Energy, Piedmont Natural Gas and Southern Company Gas.

“Dominion Energy corrupts Virginia politics like no other company,” he wrote. “None come close to matching Dominion’s political campaign contributions.”

The company is using its political power to keep a hold on the mid-20th century fossil fuel technologies, Shearer told the Bristol Herald Courier.

“We are unable to take advantage of the renewable energy revolution that is occurring around the world,” he said.

Shearer has been excited about renewable energy for the past 10 years. He has a 5.7 kilowatt solar array that supplies nearly 93 percent of the energy he uses.

“I am extremely pleased with it,” he said.

The letter concludes with a request that McAuliffe order DEQ to initiate a full-scale review of the environmental impacts the pipelines will have.

Shaffer delivered the other personal letter that focused on gas drilling.

“Gas drilling threatens any nearby water supply, as well as the air, our health and our quality of life,” Shaffer wrote. “Make no bones about it.”

Employees at ZF TRW in Atkins learned that the company will permanently close the plant at the end of 2022.

A new place for Bristolians to pick up breakfast and a cup of joe on their morning commute is under renovation in Bristol.

Eleven economic development projects designed to benefit localities in the coalfield region have been selected for possible grant approval from the Abandoned Mine Land Pilot Program.

Local citizens attend a lunchtime rally outside the DEQ offices in Abingdon on Thursday in opposition to pipeline construction in Virginia. Leaders delivered a detailed letter of protest against the pipelines to officials at each DEQ office.

Karen Shaffer reads part of her letter to DEQ officials during a lunchtime rally in opposition of pipeline construction outside the DEQ offices in Abingdon Thursday. Leaders delivered a detailed letter of protest against the pipelines to officials at each DEQ office.

Rees Shearer reads part of her letter to DEQ officials during a lunchtime rally in opposition of pipeline construction outside the DEQ offices in Abingdon Thursday. Leaders delivered a detailed letter of protest against the pipelines to officials at each DEQ office.