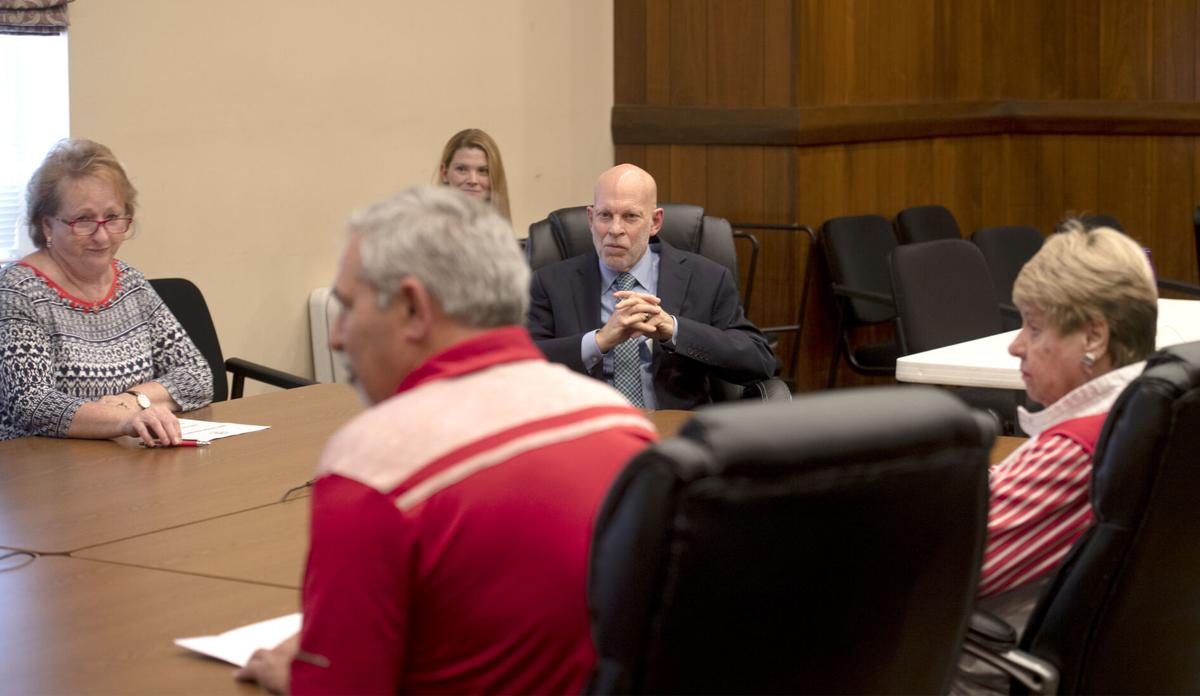 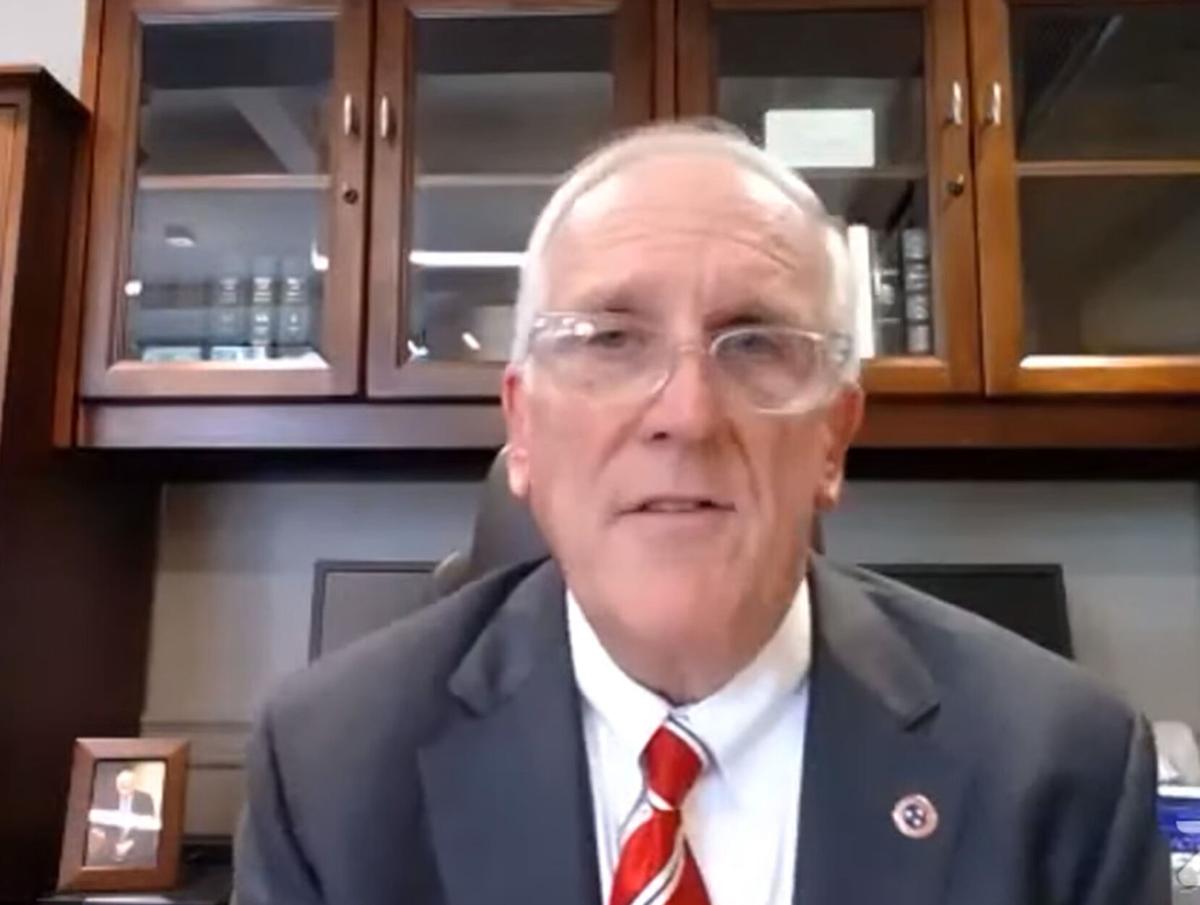 BLOUNTVILLE, Tenn. — Sullivan County officials announced Wednesday that they approved a strategy for a landmark opioid trial set to start next week but wouldn’t say what it is or whether it involves a possible settlement.

The announcement happened on the cusp of a trial that could result in drug producer Endo Pharmaceuticals paying billions of dollars in damages for its role in the region’s addiction crisis.

On Wednesday afternoon, at a public meeting about the lawsuit, five members of the County Commission’s Executive Committee — Joyce Crosswhite, Michael Cole, Alicia Starnes, Todd Broughton and Judy Blalock — held a closed-door discussion with Sullivan County District Attorney General Barry Staubus. Several minutes later, the group filed into the courthouse’s Commission Room and sat around a table at the back.

There were nods. Crosswhite made a motion to accept the measure, Blalock seconded, and the group voted. Whatever it was, the trial strategy passed unanimously, and the group dispersed, rejecting requests for more information and explanation from members of the media.

Staubus and a handful of other DAGs filed the “Sullivan Baby Doe” case four years ago on behalf of nine Northeast Tennessee counties and Baby Doe, a Sullivan County baby born with neonatal abstinence syndrome. Their goal: Prove that several opioid manufacturers and distributors knowingly fueled the region’s massive addiction and overdose crisis.

Two of the drug companies sued, Purdue Pharma and Mallinckrodt Pharmaceuticals, have dropped out via bankruptcy. Endo Pharmaceuticals is the only company left.

In April, Chancellor E.G. Moody, who has been presiding over the lawsuit, issued a default liability judgment against Endo — a rare legal punishment that essentially ruled the drug company liable for damages before the case went to trial. Now, the only thing left to establish at the trial is how much it owes. The local governments involved are seeking $2.4 billion.

Sullivan County officials aren’t the only group set to discuss the opioid lawsuit as the case goes to trial Monday. On Tuesday, according to a meeting agenda, the Bluff City Board of Mayor and Aldermen held a called meeting to discuss one item: “settlement of opioids lawsuit.” And the Washington County Commission published plans for an “emergency meeting” Wednesday evening to “consider settlement of a pending litigation matter,” according to its website.

At a November 2020 Sullivan County Commission meeting, Staubus shared that there was “talk of a settlement” with Endo in the case. But when asked about it Wednesday, he said he had no comment. J. Gerard Stranch IV, managing partner of Branstetter, Stranch & Jennings, the firm representing the plaintiffs in the lawsuit, could not be reached Wednesday for comment.

Meanwhile, the case still appears to be moving through the gears of the court system.

According to Sullivan County Circuit Court Clerk Bobby Russell, jury orientation is still scheduled to start at 9 this morning, and a hearing for the case will happen at 3 p.m.

However, just before noon Wednesday, the plaintiffs filed several objections against Endo’s conduct, including its jury instruction form.

“Endo has submitted 70 pages of jury instructions with an additional 9-page Appendix (effectively, 79 pages of jury instructions),” the objection stated. “With few exceptions, this submission ignores the Court’s default judgment and subsequent rulings and seems designed to confuse the jury. It also contains argumentative sections taking issue with the Court’s rulings.”

It was unclear whether the objection could impact jury orientation this morning.

Wednesday was also a busy day for opioid litigation at the national level: On a Zoom conference that afternoon, a slew of state attorneys general announced that they’d reached a $26 billion settlement with four major opioid distributors and manufacturers.

Drug distributors Cardinal, McKesson and AmerisourceBergen will pay state and local governments up to $21 billion to fund relief for people who have suffered from opioid addiction, according to a statement from Tennessee Attorney General Herbert H. Slatery III, who worked on the agreement.

The statement said that Johnson & Johnson, which produced and marketed opioids, will pay up to $5 billion over nine years.

“This $26 billion agreement ... represents the second-largest cash settlement in American history, we believe, exceeded only by the tobacco settlement more than 20 years ago,” Connecticut Attorney General William Tong said during the call.

Slatery’s statement said that more than two-thirds of the money must be spent “on opioid treatment and prevention.”

Slatery estimated that Tennessee will probably receive “around $600 million” from the deal.

“The Tennessean ... reported on [Wednesday’s] front page that 2020 was the deadliest year on record for opioid overdoses in Tennessee,” Slatery said. “About 3,000 people died, mostly involving fentanyl or similar synthetic opioids.

“So the urgency of this problem continues — it’s just relentless,” he said. “Today is a good day. … With these agreements on the table, we’re ready to move forward.”

Moving Mountains: The Making of the Coalfields Expressway

BRISTOL, Va. — Cyber criminals conducted a ransomware attack on the Bristol Virginia Police Department’s computers earlier this year and now appear to be trying to sell information on the dark web.

A woman was arrested Thursday on a drug charge in Bluff City.

Washington County School Board member Terry Fleenor announced his resignation late Sunday, nearly a week after a contentious board meeting that included discussion of transgender issues.

Michael and Margie Munsey’s backyard getaway is fit for a fairytale. The couple love that their Abingdon historic Carriage House is a roadside attraction, decorated in a magical Old World European style.

The body was found in extremely steep and rough terrain in the southernmost part of the park.