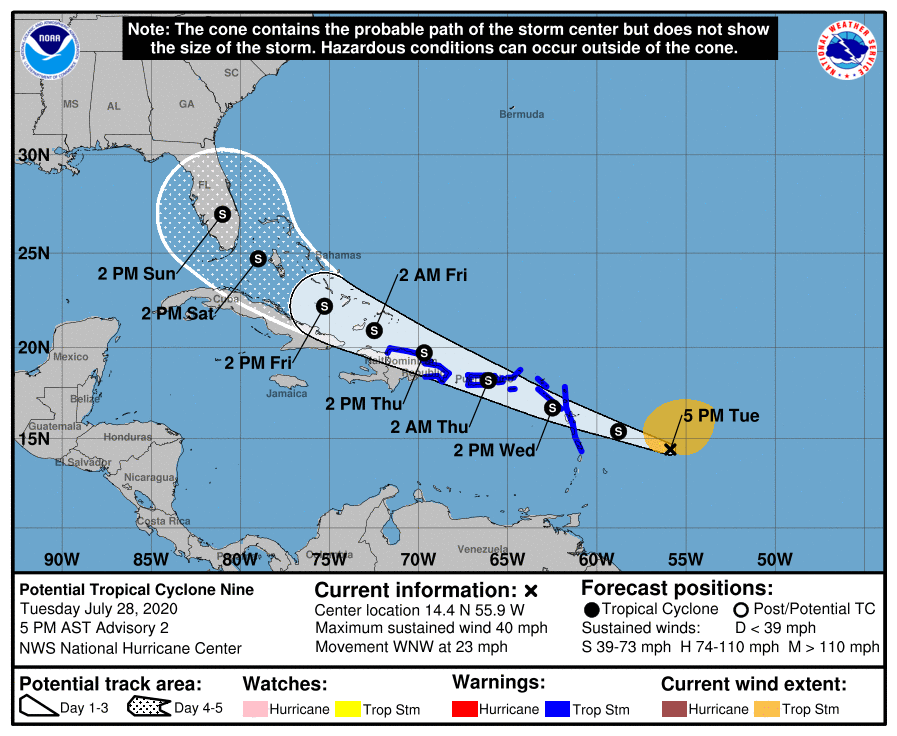 As of Tuesday afternoon, the forecast track for Potential Tropical Cyclone Nine. 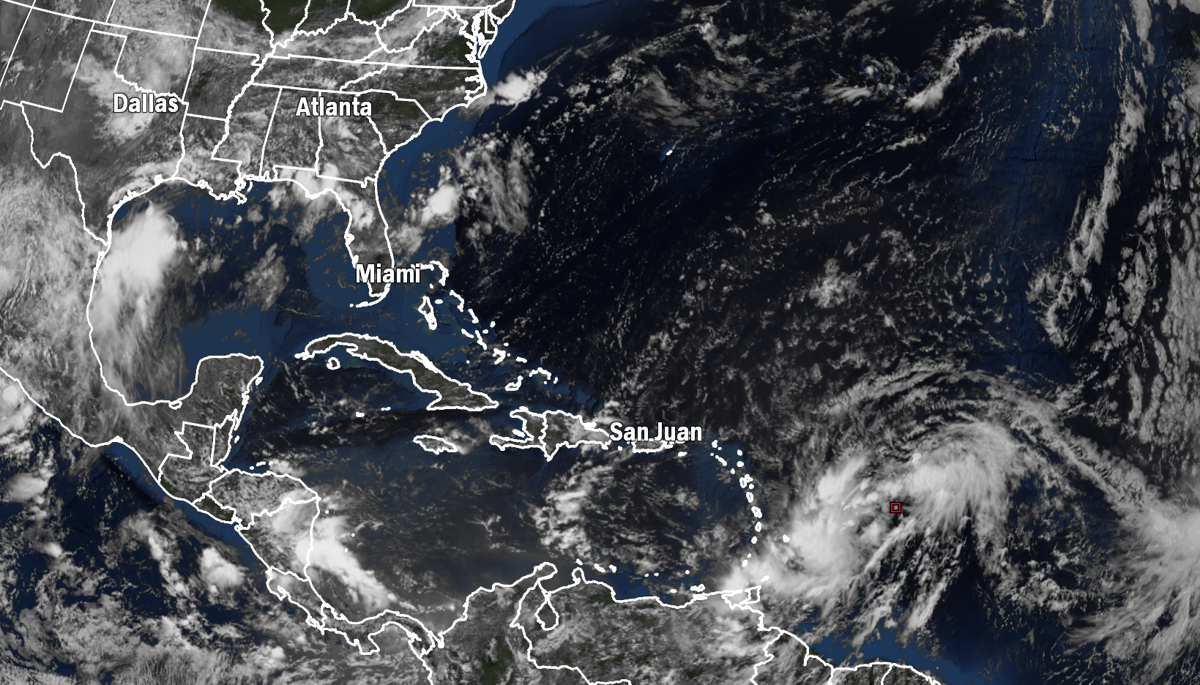 A broad whirl of thunderstorms heading for the Lesser Antilles on Wednesday could figure into the forecast for the southeastern United States by next week, but the uncertainty is higher than normal.

On Tuesday morning, the National Hurricane Center designated the low 350 miles east of Barbados as “Potential Tropical Cyclone Nine.” That means it was on the verge of becoming Tropical Storm Isaias (pronounced “ees-ah-EE-ahs”).

A reconnaissance aircraft flew through the elongated, gusty disturbance to gather clues about where a circulation might emerge, but it had not yet organized.

For the next several days, the system will be steered west-northwestward around a large ridge of high pressure centered between Bermuda and the Azores.

That puts most of the Caribbean Islands from the Leeward Islands to Cuba within its possible path, along with the Bahamas and Florida. Tropical storm warnings are already in effect from Martinique to the Dominican Republic.

The NHC’s forecast shows a tropical storm near Florida’s Atlantic coastline by Saturday night, with the potential track area anywhere between the eastern Gulf of Mexico and the waters due south of the Carolinas.

But the more immediate concern will be flooding rains and mudslides throughout the northern Leeward Islands, U.S. Virgin Islands and Puerto Rico, where the system could unleash up to 10 inches of rain.

In a forecast discussion, the NHC stressed that the ultimate track is very sensitive to where the storm’s center initially forms within that broad low. If the current forecast shifts to the north by a hundred miles, it could keep more of the rain and wind offshore in the western Atlantic, while a shift to the south would bring the heart of the storm into the Caribbean Sea and over the terrain of Hispaniola.

As a result of that spread, and possible weakening from wind shear later this week, the intensity of future-Isaias is also subject to plenty of uncertainty.

If it strengthens to hurricane force at some point, a northward trend in the track becomes more likely. A weaker storm would be confined farther to the south and possibly stay out of the western Atlantic entirely. A similar situation clouded the formative stage of Hurricane Dorian in 2019. Had it collided with the terrain of Hispaniola as originally predicted, it might not have had the opportunity to strengthen into the monster storm that devastated parts of the Bahamas.

Some computer models, which extend beyond the five-day range of the official NHC forecast, depict a tropical storm or hurricane curving north along or just off the U.S. Eastern Seaboard in the first half of next week. Though that’s one of a few possibilities on the table — and the most intriguing scenario for our region — it’s not necessarily the most likely outcome at this point.

For interests along nearby beaches, we’ll have to wait and watch for several things in the coming days: 1) where Isaias starts to spin together, 2) how it interacts with land on Thursday and Friday, 3) how strong it gets over water by the weekend, and 4) what the steering patterns look like early next week if the storm survives and reaches Florida.

Even if the storm is ultimately sheared apart by strong winds by then, some remnant tropical moisture flowing into the southeastern U.S. might lead to a welcome uptick in rain chances for parts of the state where a drought is now developing.

As we just saw with Edouard, Fay, Gonzalo and Hanna in recent weeks, Isaias would also be the earliest-forming “I” storm on record in the Atlantic. Previously, the record was set by Irene on Aug. 7, 2005. Typically, the ninth storm of a season is more likely to form by late September or early October.

With the peak of this already-active season still looming in late summer and early autumn, it’s still a good time to review your hurricane plan and disaster readiness. On Monday, the Virginia Department of Emergency Management released an updated hurricane guide with considerations for the COVID-19 pandemic.

Look for updates on the storm later this week.

Tune in at 2 p.m. for the latest developments on Virginia and Governor Ralph Northan's continued response to COVID-19 in the state.

As of Tuesday afternoon, the forecast track for Potential Tropical Cyclone Nine.