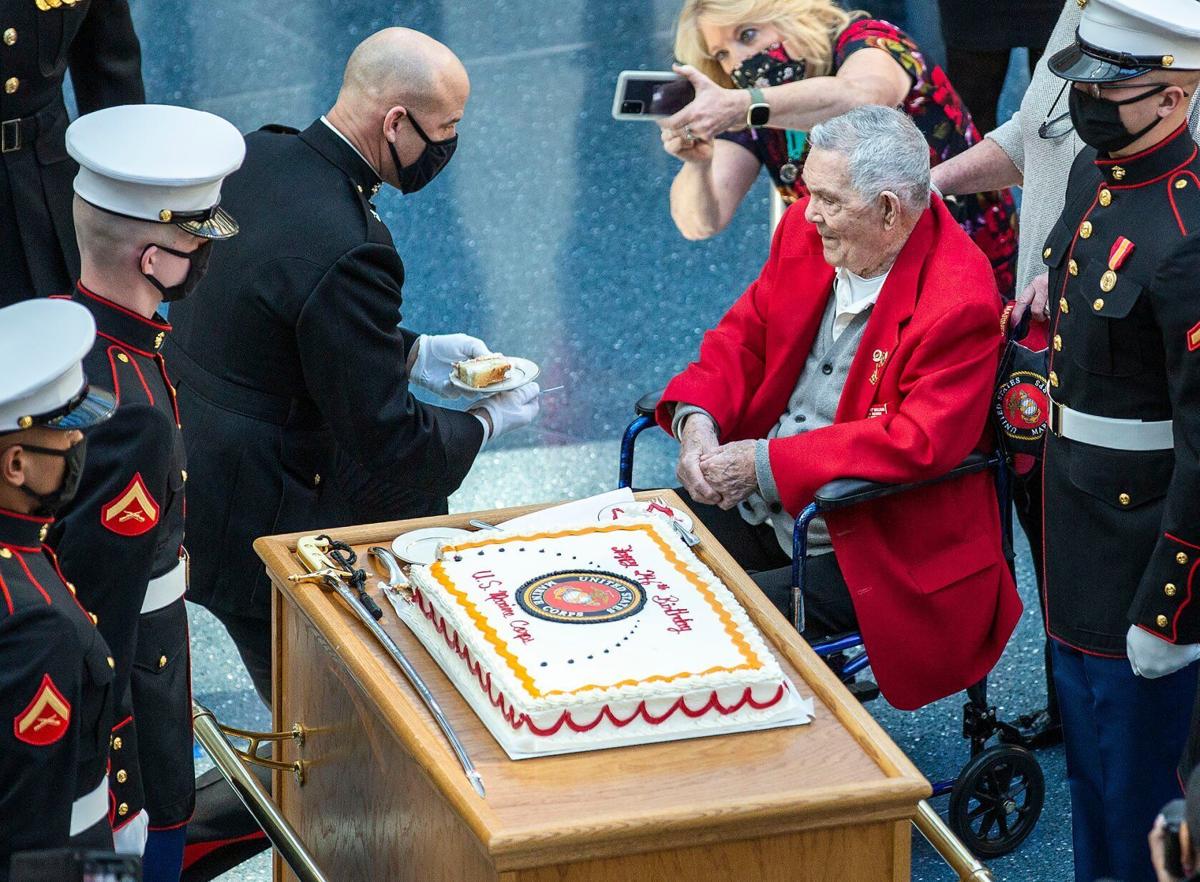 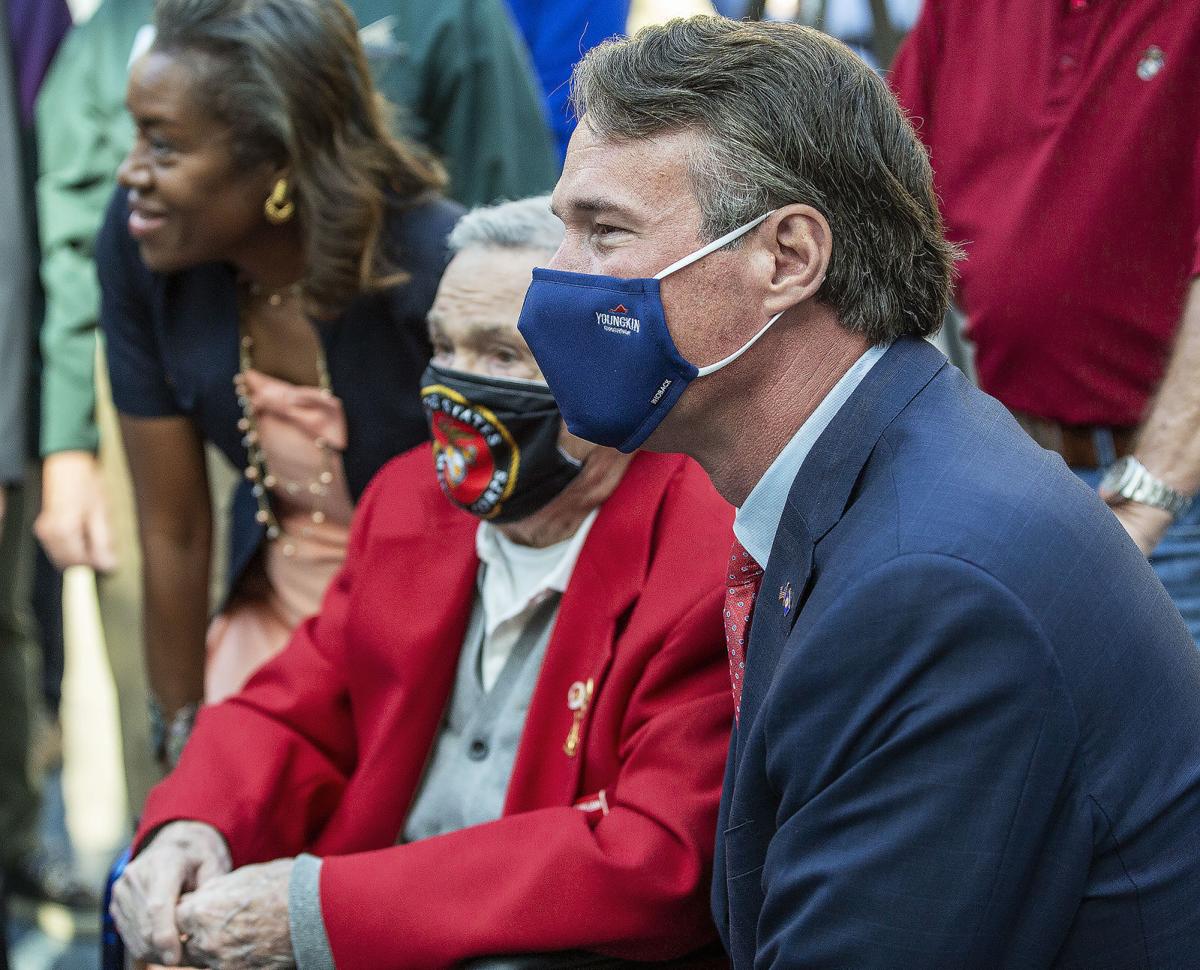 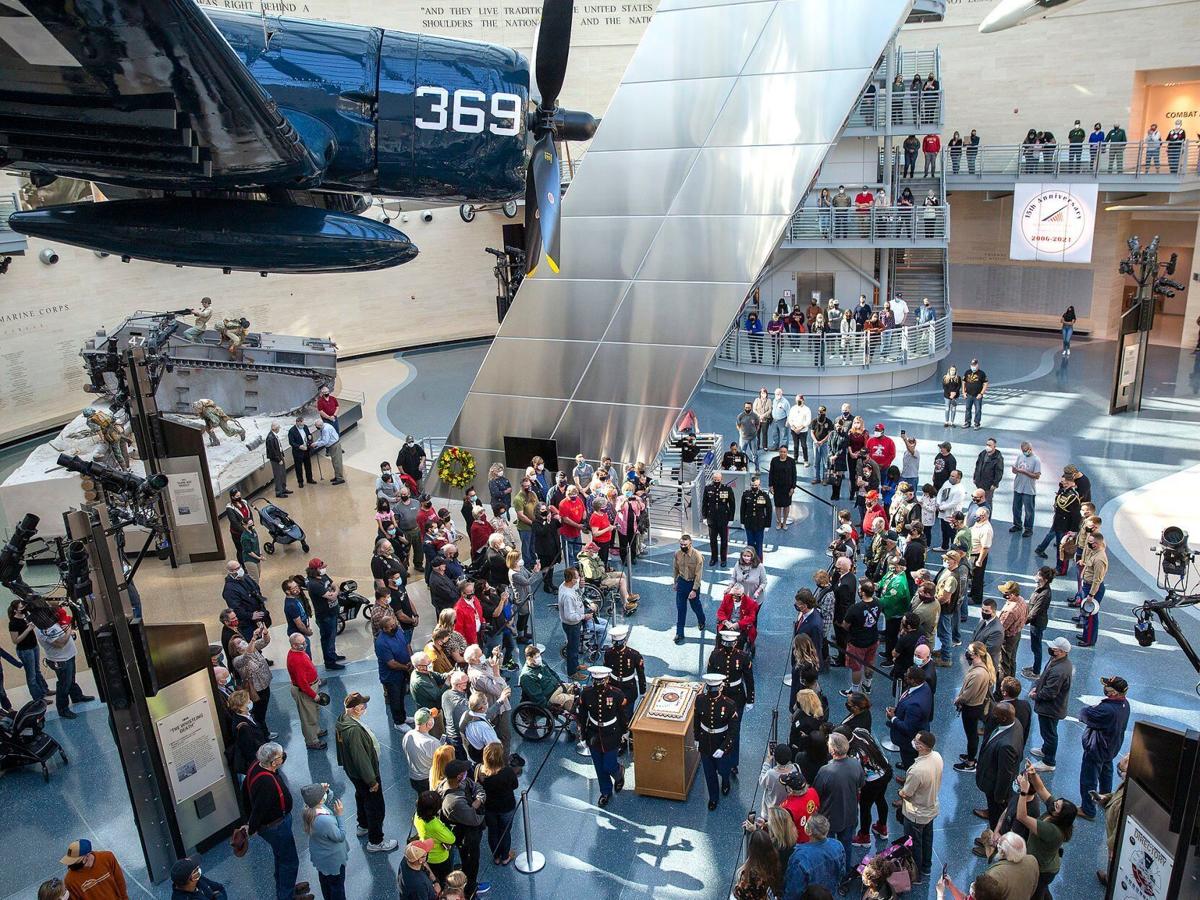 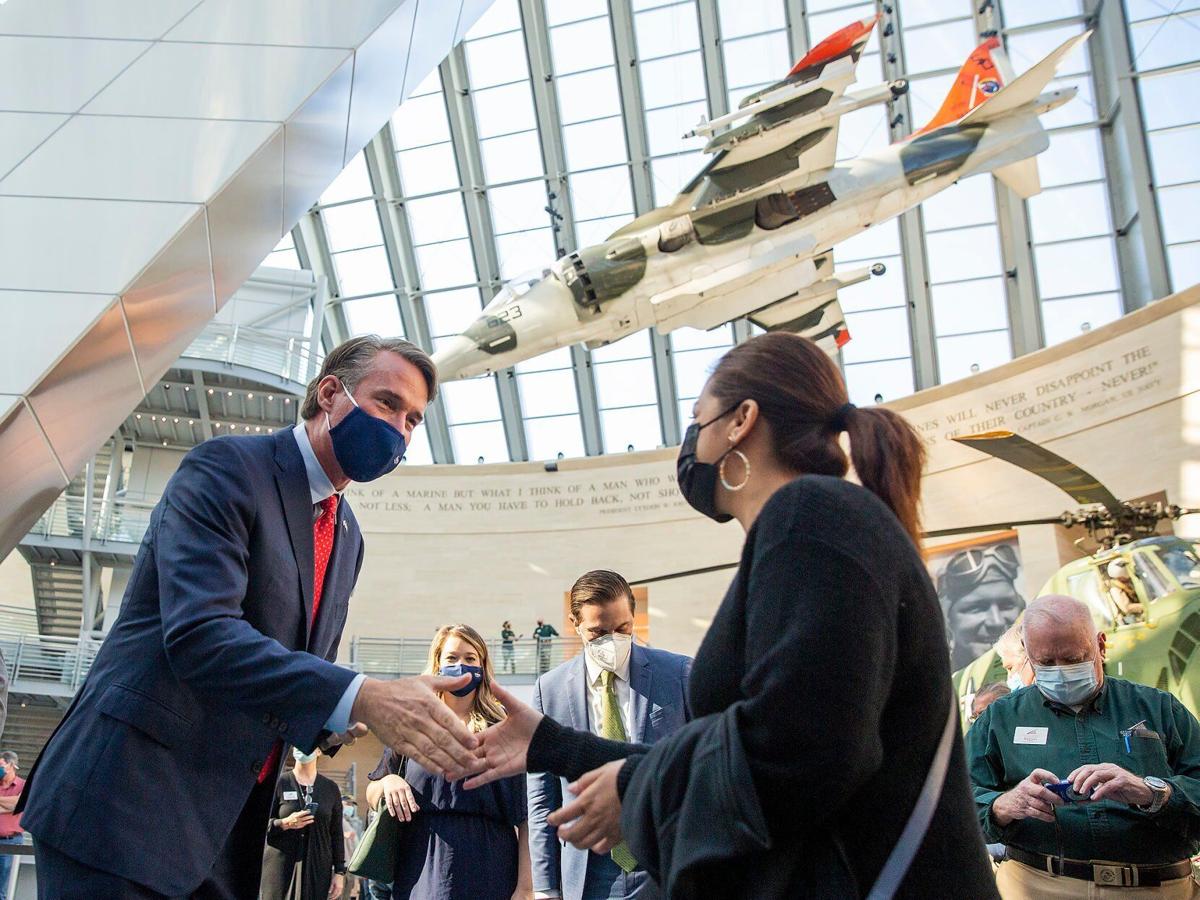 Attendees greet Gov.-elect Glenn Youngkin at the Museum in Triangle.

The U.S. Marine Corps celebrated its 246th birthday Wednesday morning at the National Museum of the Marine Corps. The event featured a traditional cake-cutting ceremony, which included honoring the youngest and oldest Marines in attendance.

Shortly before 11 a.m., 101-year-old retired Marine Pvt. Bert Mulligan of Fluvanna County learned he had the honors of being the oldest Marine in the group of over 200 people.

In addition to active-duty and retired service members and their families, the crowd at the museum in Triangle included Gov.-elect Glenn Youngkin and Lt. Gov.-elect Winsome Sears, who is a Marine veteran.

Devin O’Malley, communications officer for Youngkin, said Wednesday’s visit to the Quantico military community by the two Virginia leaders was not only to honor the Marine Corps birthday, but to also personally thank the men and women who serve in uniform.

“The veteran community within Virginia—especially Virginia Beach, Northern Virginia and here in the Quantico area—was such an important part of Glenn’s winning coalition to unify Virginians of all backgrounds and all ideologies,” said O’Malley.

Mulligan, who enlisted in 1942 and found himself fighting in the battle at Iwo Jima just three years later, passed a piece of birthday cake to 20-year-old Lance Cpl. Sam Farber, the youngest Marine in attendance, who enlisted in the Marines in 2020.

“It’s a cause for celebration and reflection on the guys who won’t be here to celebrate it with us,” said Arnold.

Bill Sweeney of Stafford served in the Marines from 1973 to 1977. He said Wednesday’s event brought back fond memories of the Corps and the camaraderie he enjoyed while on active duty.

“Hopefully one day I can find someone I served with,” Sweeney said.

Youngkin later told reporters that after he takes the oath of office Jan. 15, he has an aggressive early agenda to tackle that he said will benefit many of the people he met at the museum. In addition to eliminating the grocery tax, doubling the standard deduction and suspending recent increases in the gasoline tax, Youngkin also plans to lower the tax on the pension military veterans receive.

“We’ll build up over three years to $40,000 of our veterans’ retirement that we’re going to exclude from taxes altogether,” Youngkin said.

Youngkin also said he stands firmly in support of law enforcement agencies across the state.

“Our communities have found themselves at a 20-year high murder rate, so we’re going to fund in higher salaries and equipment and also training budgets; we’re going to protect qualified immunity,” said Youngkin.

Youngkin also said he will ensure the states’ mental health and behavior health systems are fully funded and plans to replace the entire state parole board while raising standards in public schools and increasing the education budget.

“And of course we’ve got to work on the curriculum itself,” said Youngkin. “I want to make sure that Virginia’s kids are being taught how to think, not what to think.”

Youngkin, who said Virginia ranks 49th in the country in terms of the best state to start a business, said he is ready to flip that number around after learning of Ford Motor Co.’s recent announcement to build new plants in Kentucky, Tennessee and Georgia.

“It’s not going to be 49th by the time we’re done. We’re going to march towards that No.1 spot,” said Youngkin.

Todd Weidensaul, a retired Air Force chief master sergeant from Inverness, Fla., said he stumbled across the birthday celebration while visiting the museum. He said he was surprised to see Youngkin in the crowd.

“I know him, just from the TV,” said Weidensaul, after having his photograph taken with Youngkin. “Watching the news, I’m just so happy for the United States of America.”

Virginia Beach officer who fatally shot Donovon Lynch at Oceanfront will not be charged, prosecutors say

A special grand jury impaneled to investigate the fatal shooting of Donovon Lynch at the Oceanfront earlier this year by a Virginia Beach police officer has recommended the officer not be criminally charged, prosecutors announced during a press conference Tuesday.

The Spotsylvania County School Board has directed staff to begin removing books that contain “sexually explicit” material from library shelves and report on the number of books that have been removed at a special called meeting next week.

A wildfire at Pilot Mountain State Park grew to 500 acres Monday and is expected to reach 900 acres.

A wildfire at Pilot Mountain State Park near Winston-Salem, N.C., grew to more than 1,000 acres by Tuesday afternoon. The blaze is about 20% contained, officials said, and is burning only inside the park.

The omicron variant: UVA immunologist explains what you need to know

Dr. William A. Petri, an immunologist at the University of Virginia School of Medicine, answers this week’s questions from readers on COVID-19. Dr. Petri will keep dishing on COVID-19 and answering your questions each week in The Daily Progress for as long as you have questions. Send them to Editor Lynne Anderson at: vanderson@dailyprogress.com, and she will forward them to Dr. Petri.

The pandemic continues to be unkind to the Virginia Railway Express commuter system as ridership still lags, with no improvement on the horizon.

Attendees greet Gov.-elect Glenn Youngkin at the Museum in Triangle.