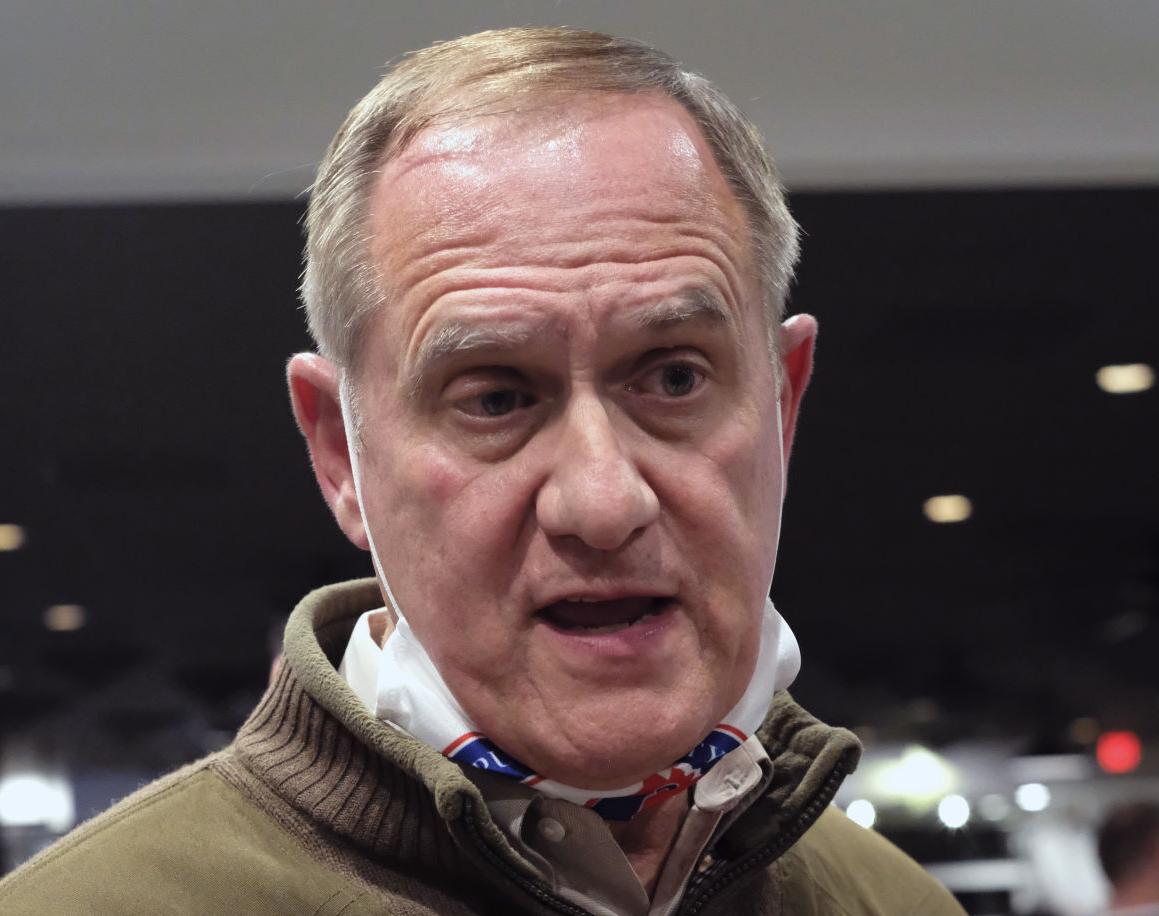 Rich Anderson is chairman of the state Republican Party 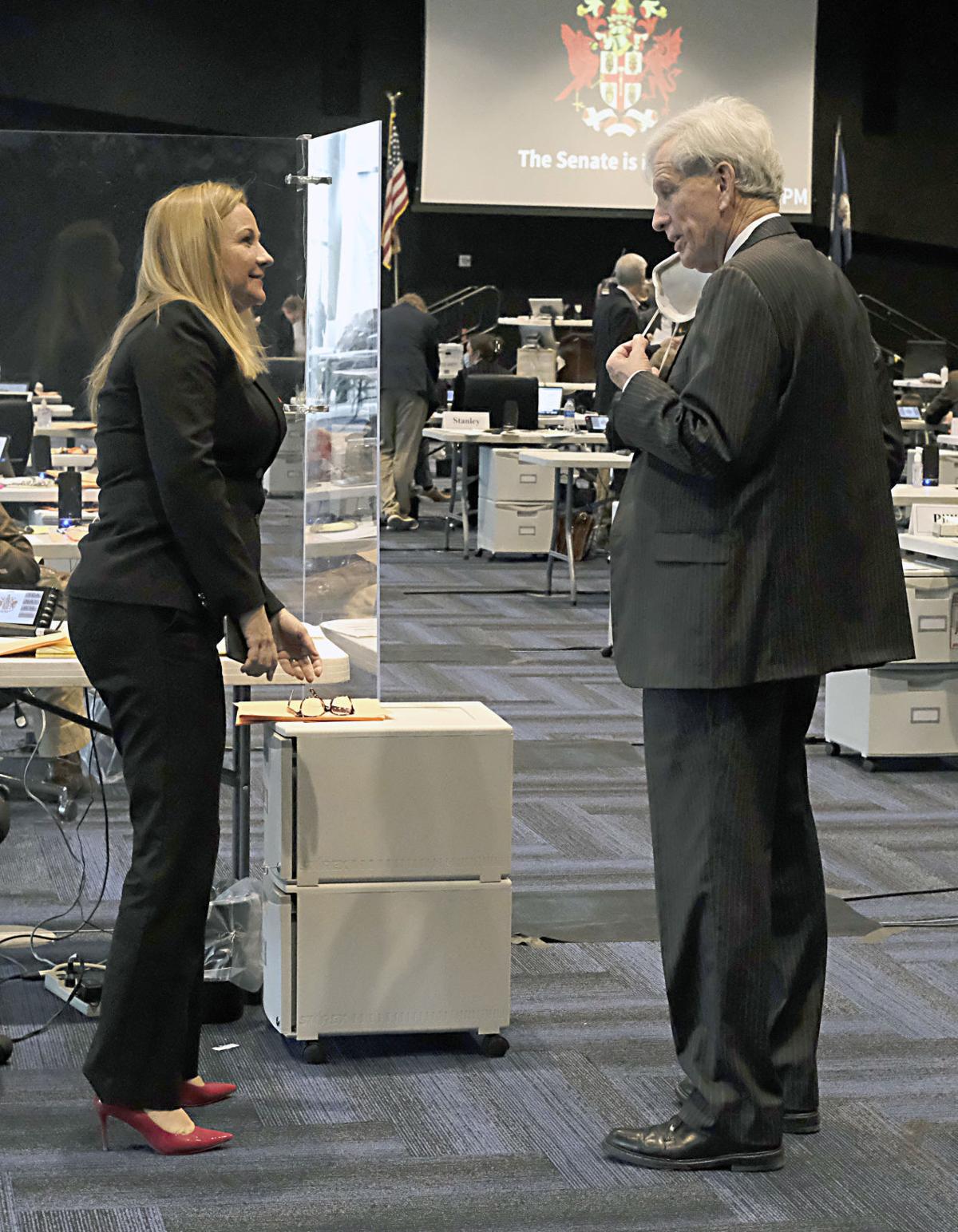 Sen. Amanda Chase, R-Chesterfield, left, and Senate Majority Leader Richard Saslaw, D-Fairfax, right, have a conversation during the floor session of the Virginia Senate inside the Science Museum of Virginia in Richmond, VA Friday, Feb. 19, 2021.

Virginia Republicans picked a new party chairman in August with hopes of winning again after losses in every statewide Virginia race since 2009.

But before they can win, they need to figure out how to nominate their statewide candidates for the November election. And disagreement within the party’s governing body continues to unwind publicly.

The party’s State Central Committee has opted for a convention to choose nominees. But there’s a problem — assembling such a large group of people in one place appears illegal under Virginia’s COVID-19 restrictions. And the committee has been unable to get the required 75% of its members to approve rules changes that would allow a legal process, like a drive-thru convention with voting held around the state.

One of the top contenders for the GOP gubernatorial nomination, Amanda Chase, filed a lawsuit against the state GOP asking a Richmond circuit judge to rule a convention illegal. Judge Margaret P. Spencer dismissed the lawsuit on Friday.

The state senator from Chesterfield has decried the possibility that if the State Central Committee doesn’t take further action, and a convention can’t happen, that the committee might actually choose statewide nominees, something that hasn’t happened since 1978.

“Apparently the Richmond Circuit Court is going to hand the noose to the [Republican Party of Virginia] so they can go hang themselves,” Chase wrote on Twitter. “Sadly, the people of Virginia lost today. The 72 members of the SCC will be choosing our Republican nominees unless [they] can come together.”

Many Republicans expected Chase’s lawsuit to be dismissed. But the lawsuit put more attention on the problem that’s generating national attention for the Virginia GOP.

Another GOP gubernatorial contender, Glenn Youngkin, said this week that the committee needs to come up with an answer so candidates can move forward. He said he was sympathetic to Chase’s frustration.

“We have an election in November and we don’t even have a plan to select our candidate,” Youngkin said Tuesday on 107.5 WCHV in Charlottesville. “This is absolutely amazing to me.”

GOP gubernatorial contender Del. Kirk Cox, R-Colonial Heights, believes that while details of the nomination process are the prerogative of the State Central Committee, members need to decide as quickly as possible, spokesperson Elizabeth Gregory said.

In a statement Friday, another GOP contender, Pete Snyder, didn’t endorse any details for how the nominations should happen, but said “it’s time for the Virginia GOP to decide the rules, let the competition begin and let Virginia Republicans decide their nominees.”

But in late January, Anderson found himself writing to members telling them that after several long meetings over two months on how to create an acceptable nomination method, “we now stand at an impasse with no apparent way forward.”

Since early December, convention backers have prevailed over primary backers in a series of close votes on the divided State Central Committee, but they have not mustered the votes to change the party’s rules and allow for a decentralized convention.

One solution would have been for the party to hold a state-run primary election. But the deadline for the GOP to notify the state that it wants a primary is this coming Tuesday, and that seems unlikely. Chase urged her supporters Friday to email members of the State Central Committee and request a primary.

Anderson can call meetings of the State Central Committee, and meetings can also happen by vote of at least a third of committee members.

Thirty-one members hoped to trigger an SCC meeting this weekend. But Anderson wrote to them Thursday to say that’s not allowed. He told them he consulted with a Republican National Committee parliamentarian who advised that the committee members could not call a meeting because the committee is technically still in session.

“For that reason, I conclude that the call for a February 20th meeting is not properly before the SCC,” Anderson wrote.

In a follow-up letter Friday, Anderson said he’d convene the State Central Committee for an online meeting at 7 p.m. Tuesday.

The work, Anderson wrote, is far from done.

2 hikers rescued after falls along the icy Appalachian Trail

Teachers, state employees and state-supported local employees would receive raises of 5% in the next fiscal year, with additional money for state police salaries, under a budget agreement House and Senate leaders reached late Wednesday night.

Representatives of Gov. Ralph Northam and Attorney General Mark Herring backed a bill to strengthen Virginia’s laws against sexual harassment and workplace harassment. But a Democratic senator joined Republicans on a committee Monday to stop the proposal from moving forward this year.

Virginia Gov. Ralph Northam along with health and public safety officials gave an update on the state's fight against COVID-19.

One option is to use a crane to remove the protesters, but no direct action had been taken by Friday.

Authorities have charged an Elliston-area man with participating in the Jan. 6 riot at the U.S. Capitol, court papers said.

Northam urges raises of 5% for teachers, 3.5% for state workers

Gov. Ralph Northam is urging state budget negotiators to use additional revenues to raise pay for teachers by 5% and state employees and state-supported local employees by 3.5%

Virginia is just an historic signature away from eliminating the death penalty after sometimes emotional debate in the General Assembly on Monday.

Rich Anderson is chairman of the state Republican Party

Sen. Amanda Chase, R-Chesterfield, left, and Senate Majority Leader Richard Saslaw, D-Fairfax, right, have a conversation during the floor session of the Virginia Senate inside the Science Museum of Virginia in Richmond, VA Friday, Feb. 19, 2021.