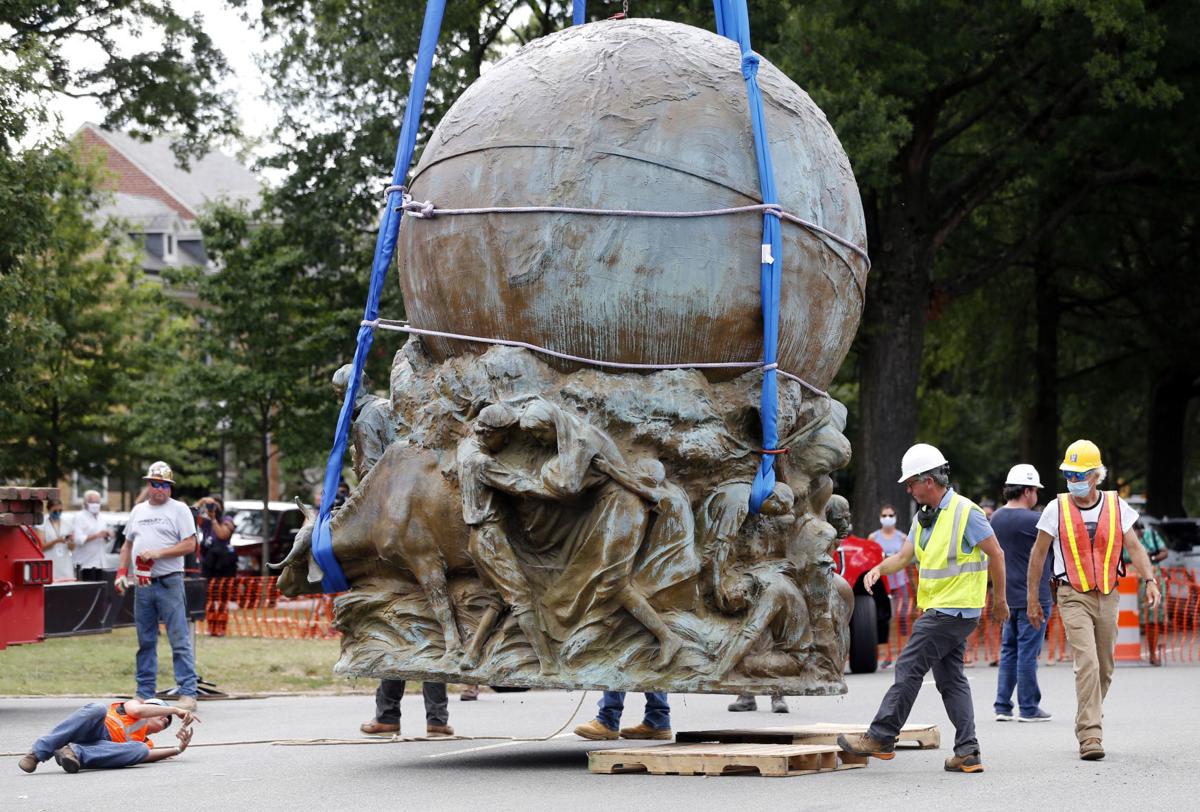 NAH LLC, the company that removed the city’s Confederate monuments, is linked to a contracting firm that donated to Levar Stoney’s campaign and PAC.

Statues removed from Monument Avenue, the Fan and Libbie Hill last summer were then moved and stored at the Richmond Wastewater Treatment Plant. 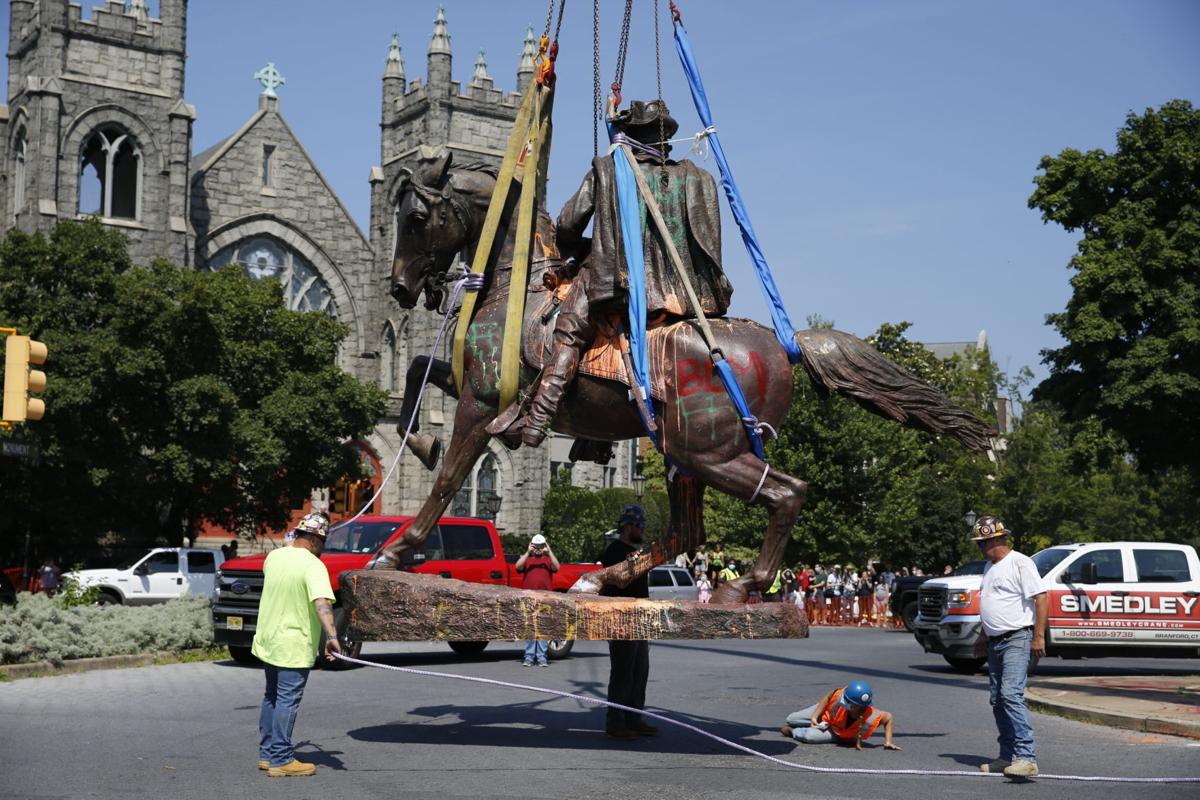 Workers removed the statue of J.E.B. Stuart from Stuart Circle along Monument Avenue in Richmond on Tuesday, July 7, 2020.

Richmond city officials are still trying how to decide what they will do with the Confederate monuments they took down nine months ago.

While staff for the Richmond City Council were initially charged with recommending final plans for getting rid of the statues, the legislative body is now considering letting Mayor Levar Stoney’s administration unilaterally decide where they should go.

The council was unable to reach consensus in a meeting on Monday, but most agreed that they want to speed up the process after months of delay.

“We have a very limited staff and a lot on our agenda,” said Councilwoman Ellen Robertson. “I think it would be wise of us to select the option of letting the administration ... continue the work.”

Richmond received approximately two dozen requests for the monuments just weeks after they were taken down in July and taken to a wastewater treatment plant for temporary storage. A city spokesman declined to confirm whether they remain there, citing security concerns.

However, the process languished through the winter following the resignation of the council’s chief of staff and the introduction of two new council members who were elected last fall.

Several officials said allowing the administration to handle the process could streamline the negotiation of contracts for the disposition of the monuments.

Some disagreed with the notion of letting the administration handle it alone.

“I think it would be great to have the administration help us out with some of the logistical items,” said Councilwoman Kristen Larson. “However, I do think it’s important that this council go through the applications and make some decisions about where they go.”

Lincoln Saunders, the city’s acting chief administrative officer, said the administration could involve council members and staff in the process if the legislative body agrees to let it take over.

Several city officials said the council would still be responsible for authorizing a contract for the disposition of each monument, but Interim City Attorney Haskell Brown noted that a decision by the Supreme Court of Virginia last week could allow the administration to sign off on them without the council’s approval.

State lawmakers last year amended a war memorial law to let localities remove them if approved by the local governing body. The Supreme Court last week ruled that the law did not apply to statues erected before 1997.

Brown said he would look into it further and provide more information to the council at one of its next meetings.

Virginia will legalize the use of recreational marijuana among adults this summer, an acceleration in the timeline that is meant to curb the disparate impact of prohibition on people of color.

Apr. 6—The case of a North Carolina child who police say came to school lugging about $30,000 worth of cocaine is making international tabloid headlines. The identity and age of the elementary school student have not been released, but it's the amount of drugs involved that is getting all the attention. "Child shows up to North Carolina elementary school with more than half a POUND of cocaine ...

Virginia’s coronavirus vaccine supply will be dealt a blow next week, following a factory mixing problem that ruined 15 million doses of Johnson & Johnson’s shots. Instead of receiving the expected 125,000 doses from the maker, the state will get just 15,000 next week, said Dr. Parham Jaberi, Virginia Department of Health’s chief deputy commissioner for public health preparedness. The state ...

Bond hearing set for Wednesday for father, daughter convicted of murder in N.C.

Molly Martens Corbett and her father, Thomas Martens, have had their convictions overturned in the death of Irish businessman Jason Corbett.

ROCK HILL, S.C. (AP) — A suspect was found after an hours-long search for the attacker in a South Carolina shooting Wednesday evening that lef…

Virginia Tech researchers are studying COVID-19 vaccine myths. A few 'are sure hard to budge.'

Infertility, paralysis and microchips? When it comes to coronavirus vaccines, the internet has been a breeding ground for misinformation.

NAH LLC, the company that removed the city’s Confederate monuments, is linked to a contracting firm that donated to Levar Stoney’s campaign and PAC.

Statues removed from Monument Avenue, the Fan and Libbie Hill last summer were then moved and stored at the Richmond Wastewater Treatment Plant.

Workers removed the statue of J.E.B. Stuart from Stuart Circle along Monument Avenue in Richmond on Tuesday, July 7, 2020.