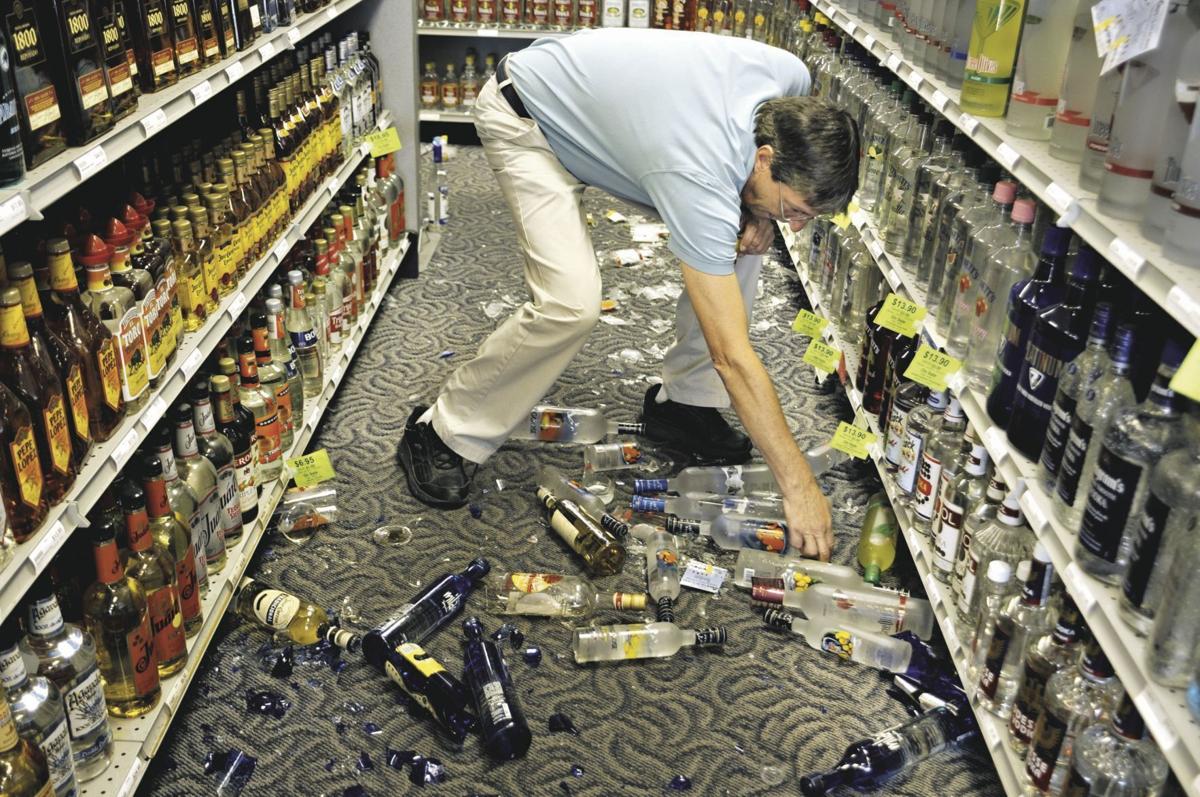 Ben Gayle picks up broken glass and bottles after a quake shook the ABC Storeon White Oak Road in Stafford in 2011. 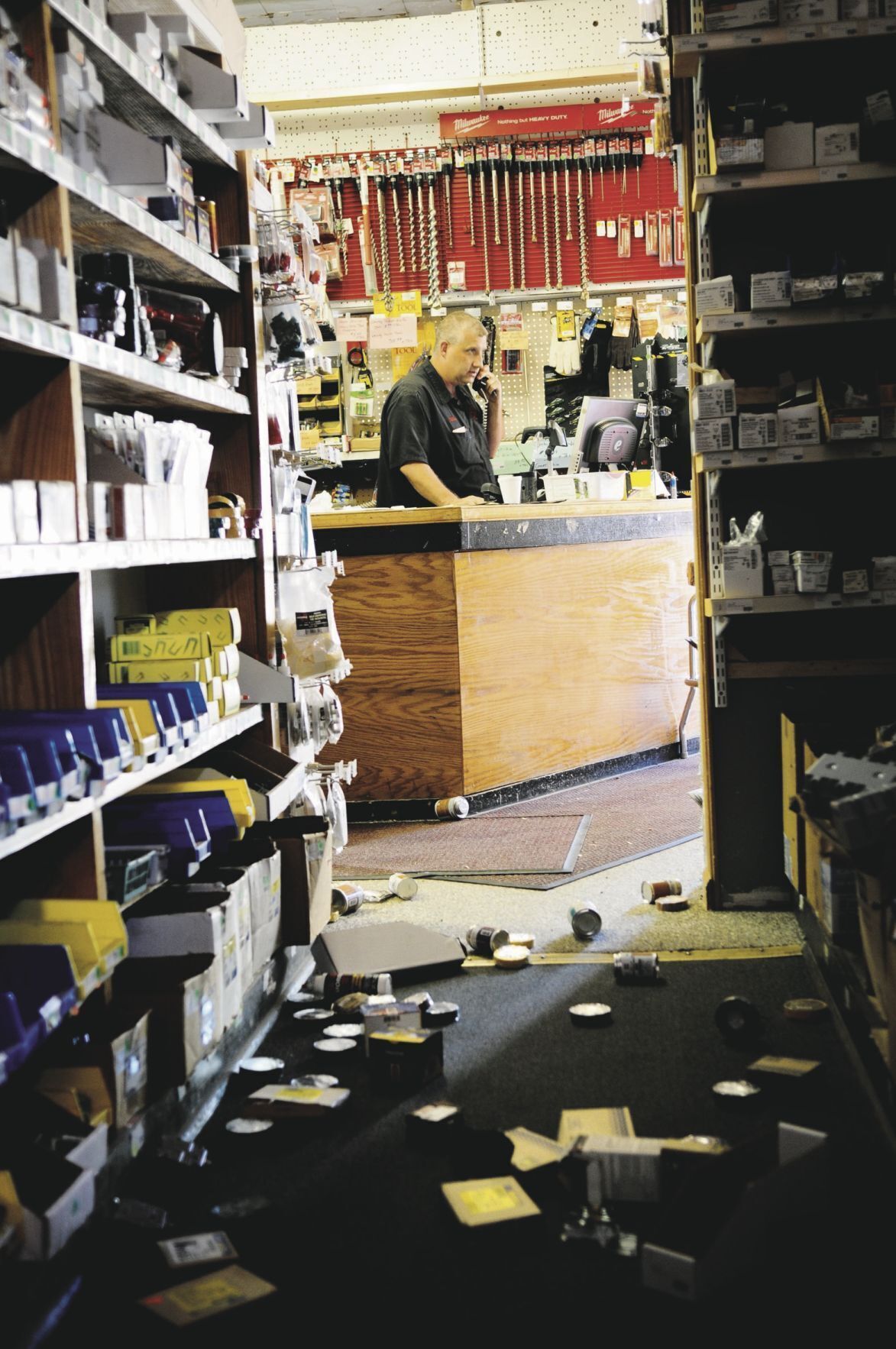 Michael Leman, co-owner of Main Street Supply in Mineral, talks on the phone with an insurance adjuster on Aug. 23, 2011. The plumbing and electrical supply store, located a few miles from the epicenter, was among the buildings damaged. 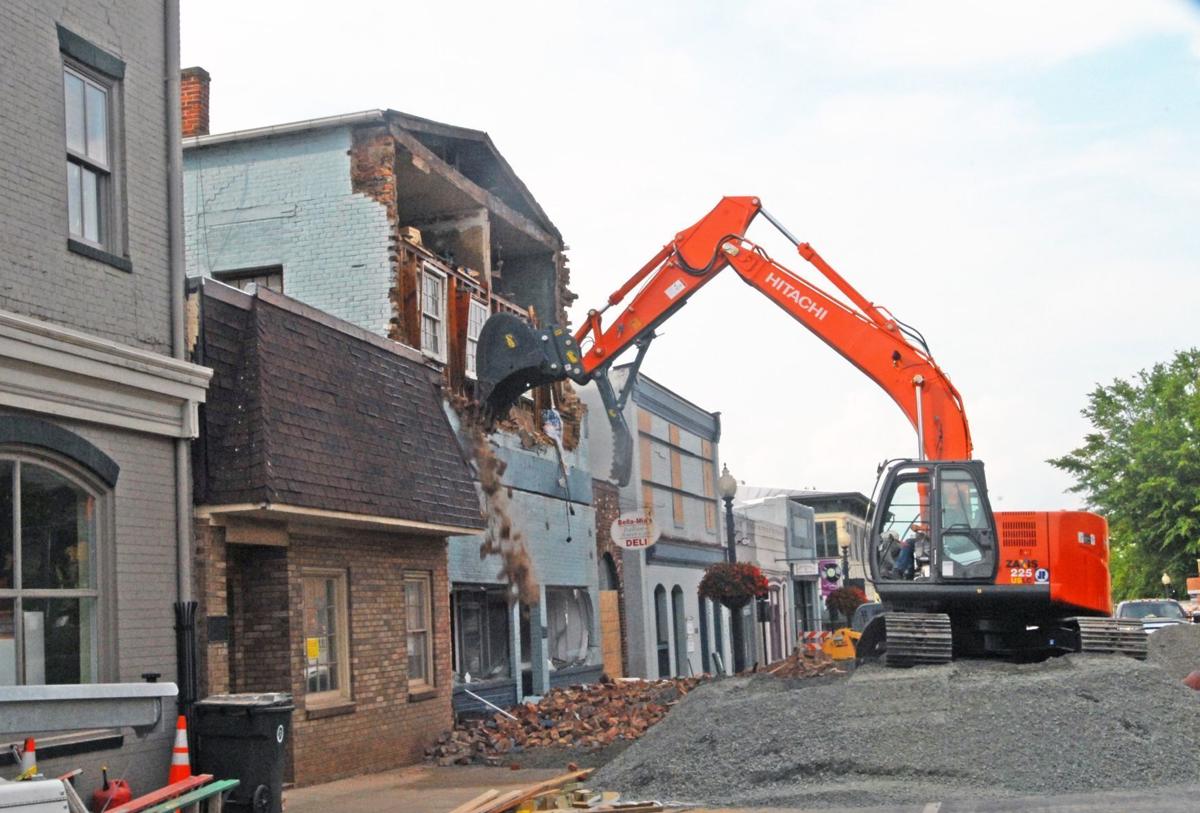 Workers from town contractors M.D. Russell bring down the building at 118 N. Main St. after it was condemned for damage it sustained in the quake. A crowd of local residents waited patiently throughout the day to see the demolition of the historic structure, which reportedly dates from the late 1800s. 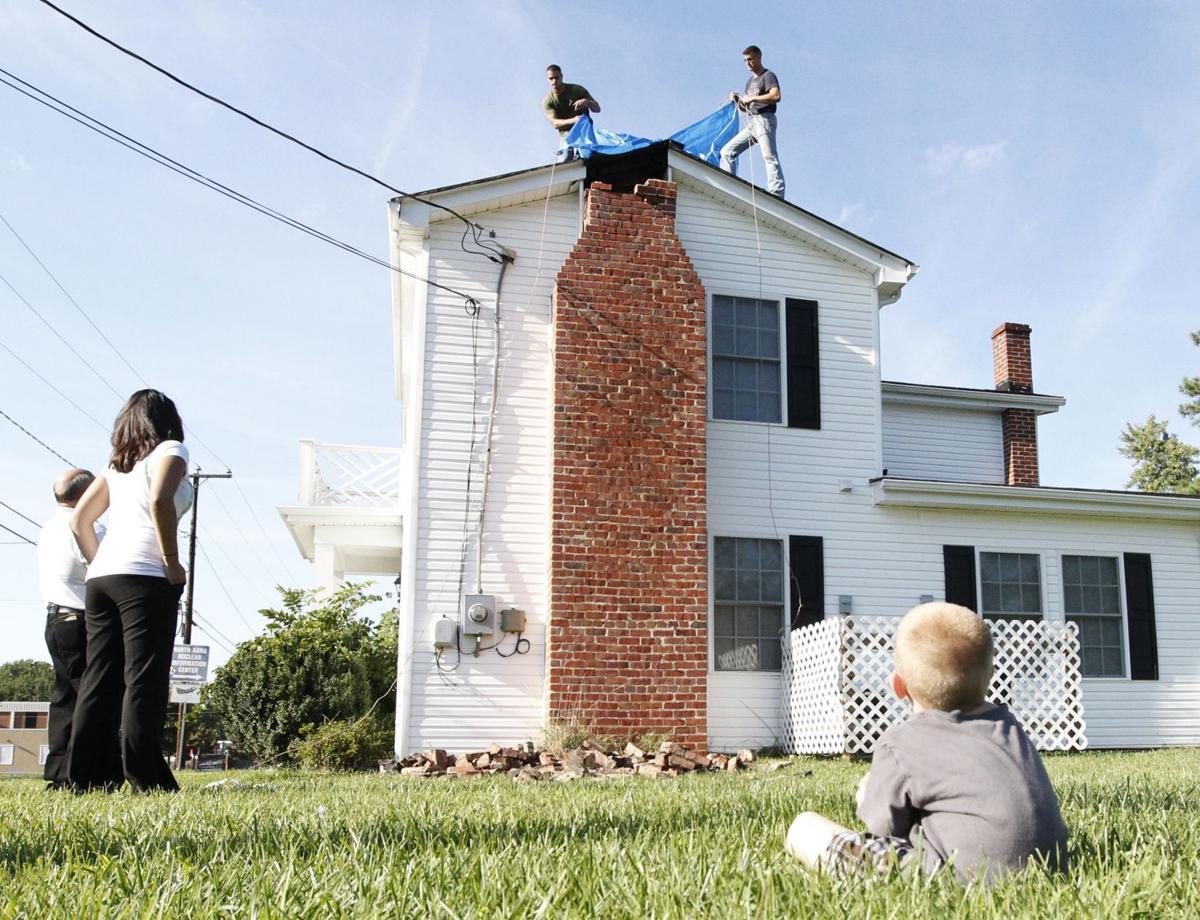 Holden Orr looks on as Christopher Hartman and Hartman’s friend Scott Hambrick weatherproof Orr’s grandfather Bill Harman’s office in Mineral, after the chimney was damaged in the earthquake.

BY SCOTT SHENK The Free Lance-Star

It was a calm Tuesday afternoon, sunny and in the upper 70s, as Pam Harlowe leaned over the kitchen table writing thank-you notes to those who had attended a recent groundbreaking for the new Mineral town hall building.

“The kitchen cabinets opened and everything flew on the floor,” Harlowe said Thursday, recalling the moment a magnitude 5.8 earthquake struck near the Louisa County town on Aug. 23, 2011.

Like millions of others along the East Coast, Harlowe easily recalled details of that afternoon.

Unlike millions of others, Harlowe was sitting near the epicenter of the quake, where the brunt of the damage happened.

In and near the town, “the chimneys all broke,” Harlowe said, adding that some area houses also sustained foundation damage.

The roof of the town hall building, built in 2011, caved in, and two county schools sustained enough damage to close them for the school year. With federal assistance, the county eventually built two new schools.

The earthquake caused damage throughout the region and beyond. It put cracks in the Washington Monument and damaged the National Cathedral in Washington, D.C.

“Although not the strongest earthquake to have occurred in the eastern U.S., let alone the western U.S., the Virginia earthquake was likely felt by more people than any earthquake in North America’s history,” the United States Geological Survey said in a news release.

The quake was the strongest on the East Coast in nearly 70 years—rivaling the intensity of a temblor in Southwest Virginia in 1897—and was felt in Florida, southeast Canada and the Mississippi River Valley.

Though Culpeper is about 37 miles from the quake epicenter, there was significant damage in the county.

The damage in the city ranged from cosmetic to cracked walls and other structural damage to a variety of buildings, including the Fredericksburg Area Museum, the Circuit and General District courthouses, the FRED Transit building, Fire Station 1, City Hall, the Old Stone Warehouse and the Central Rappahannock Regional Library headquarters.

The earthquake also caused concerns about the safety of the two nuclear reactors at the North Anna Power Station, which was shut down for about two months after the earthquake.

At the time, Mark Haines was the coordinator of counseling at Germanna. When the earthquake hit, he was in the Fredericksburg campus building.

As people were trying to figure out what was happening, the fire alarm sounded and people started fleeing. As Haines descended a stairwell, he saw a “huge crack in the wall.”

Once outside, he heard someone say a wheelchair-bound student was stuck on the third floor.

Haines found James Haynes, a building and grounds employee, and they helped get the student, Courtney Dole, out of the chaotic scene. They used an “evacuation seat,” designed to get people like the Dole, a quadriplegic, out of buildings in emergencies.

Haines was pivotal in getting the evacuation chairs installed at the campus following a bomb threat not long after the 9/11 terrorist attacks. He said the college now has the chairs in all buildings.

With the building shuttered for repairs, the community college decided to move to online classes for students who would have been attending at the Fredericksburg campus.

It was an innovative move back in 2011 and would also prove beneficial nine years later. Germanna’s approach after the earthquake helped prepare the community college for when the COVID-19 pandemic forced classes to move online, said Mike Zitz, special assistant to the school president.

“It went well then, and spectacularly well last year,” he said. “It was a bold decision to go completely online. Germanna was one of the few colleges where enrollment went up in the pandemic.”

Geologists also gleaned benefits from the 2011 earthquake, as a study was launched that helped bring more understanding about how East Coast quakes unfold and the impacts they can cause.

The earthquake “was significant in raising awareness of East Coast earthquake hazards and the importance of research to understand when and where earthquakes can occur,” David Applegate, the U.S. Geological Survey’s associate director for natural hazards said in a news release. “Damaging earthquakes do not strike the eastern U.S. often, but the potential consequences of not understanding and planning for such events with their widely distributed shaking could be severe. The next significant earthquake on an eastern U.S. fault may not occur for hundreds of years, yet there is a small chance it could happen at any time.”

The USGS identified more than 450 aftershocks in the year following the 2011 quake, with nearly another 4,000 recognized following subsequent analysis.

“This knowledge is helping to better understand fault lines and earthquake sources and refine estimates on the number of aftershocks that can be expected,” the USGS said.

Mineral also enjoyed some silver linings from the earthquake.

“It did put us on the map,” Harlowe said, noting that after the quake whenever the mayor told someone she was from Mineral they knew it as the place where the earthquake hit.

Harlowe slept in her clothes for five months, fearing another quake would strike at night, but she also noticed another post-quake benefit.

“It really made neighbors closer,” she said, recalling people standing in the streets together following the temblor and coming together to help those who needed it. “You found out who loved you, because they came to check on you.”

PHOTOS & VIDEOS: 10 years ago, a magnitude 5.8 earthquake hit Virginia and was felt across the eastern U.S.

Virginia Beach woman gets 12 years for what could be biggest coupon scheme in U.S. history

It was described in court papers as possibly the biggest counterfeit coupon scheme in history, costing about 100 retailers and manufacturers more than $31 million in losses. And the mastermind behind it all? A Virginia Beach entrepreneur and mother of three who’d been designing and printing the highly realistic coupons from her home computer for years. On Tuesday, Lori Ann Villanueva Talens ...

Two children injured in Virginia after ATV crash with Jeep

Travis Brown and Candi Royer were arrested in Pennsylvania by the state’s police over the weekend. Augusta County Sheriff Donald Smith said the two are connected to the missing three-year-old Khaleesi Cuthriell, who has not been sighted since February.

Authorities are seeking to have a 14-year-old youth charged with the murder of 13-year-old Lucia Bremer in Henrico County last March transferred from juvenile court to Circuit Court for trial as an adult.

Jason Lail was healthy before he got COVID-19. He loved to hunt and fish. He played with his children. He had no medical conditions.

Biden's new COVID plan would require millions of workers to get vaccinated. How that will work in Va. is unclear.

President Joe Biden outlined on Thursday an extensive and aggressive set of measures pointed at sidestepping the delta variant’s rampant spread and growing COVID case counts that have forced nearly every locality in Virginia to report high levels of community transmission.

Fredericksburg schools to require students playing sports to be vaccinated

Fredericksburg City Public Schools will require that all student–athletes be vaccinated for COVID-19 by Nov. 8.

Getting there: Planes, trains and ... vaccines?

Counsel for James Alex Fields Jr. expanded on arguments that Fields should have been tried outside of Charlottesville.

Ben Gayle picks up broken glass and bottles after a quake shook the ABC Storeon White Oak Road in Stafford in 2011.

Michael Leman, co-owner of Main Street Supply in Mineral, talks on the phone with an insurance adjuster on Aug. 23, 2011. The plumbing and electrical supply store, located a few miles from the epicenter, was among the buildings damaged.

Workers from town contractors M.D. Russell bring down the building at 118 N. Main St. after it was condemned for damage it sustained in the quake. A crowd of local residents waited patiently throughout the day to see the demolition of the historic structure, which reportedly dates from the late 1800s.

Holden Orr looks on as Christopher Hartman and Hartman’s friend Scott Hambrick weatherproof Orr’s grandfather Bill Harman’s office in Mineral, after the chimney was damaged in the earthquake.