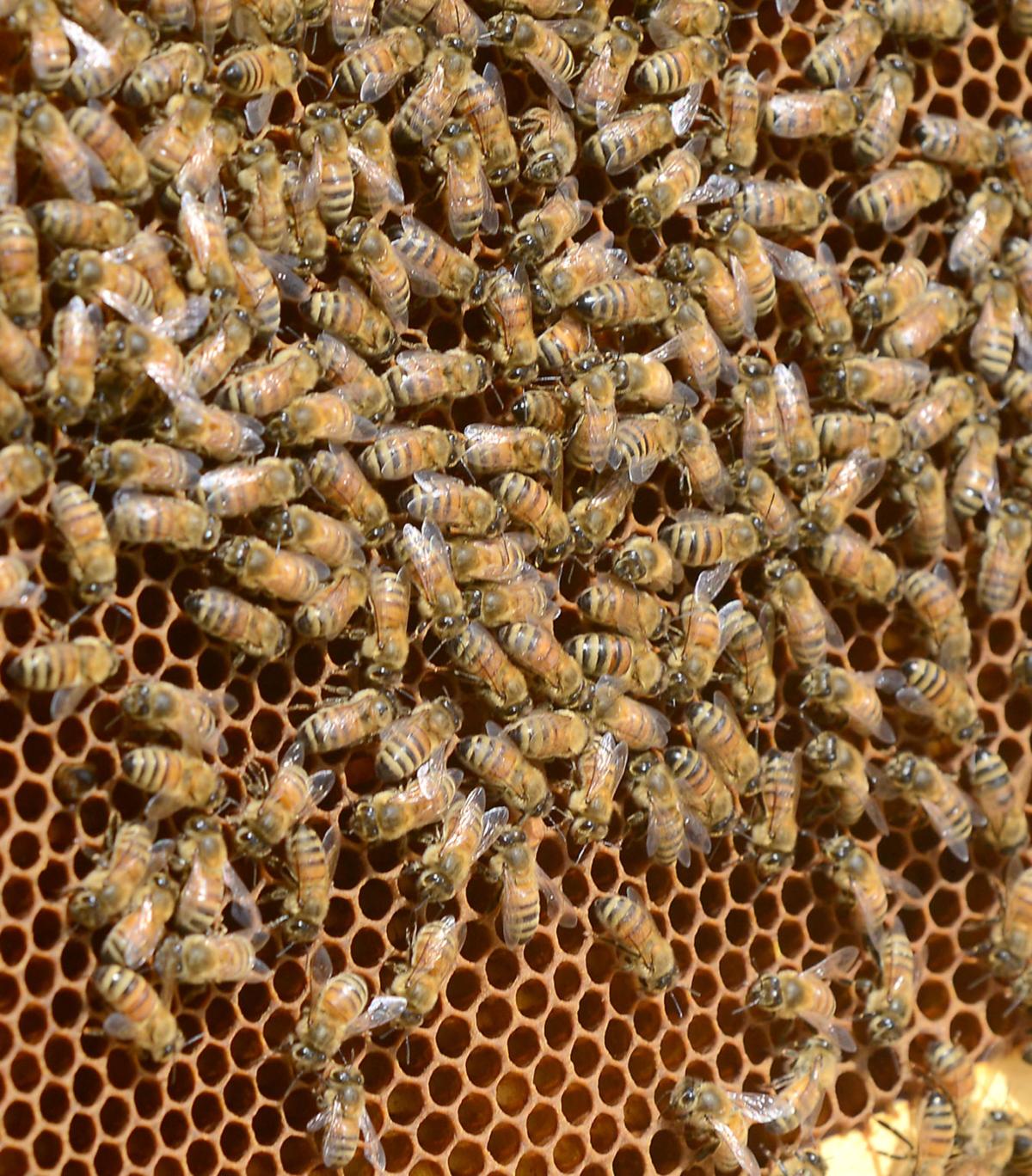 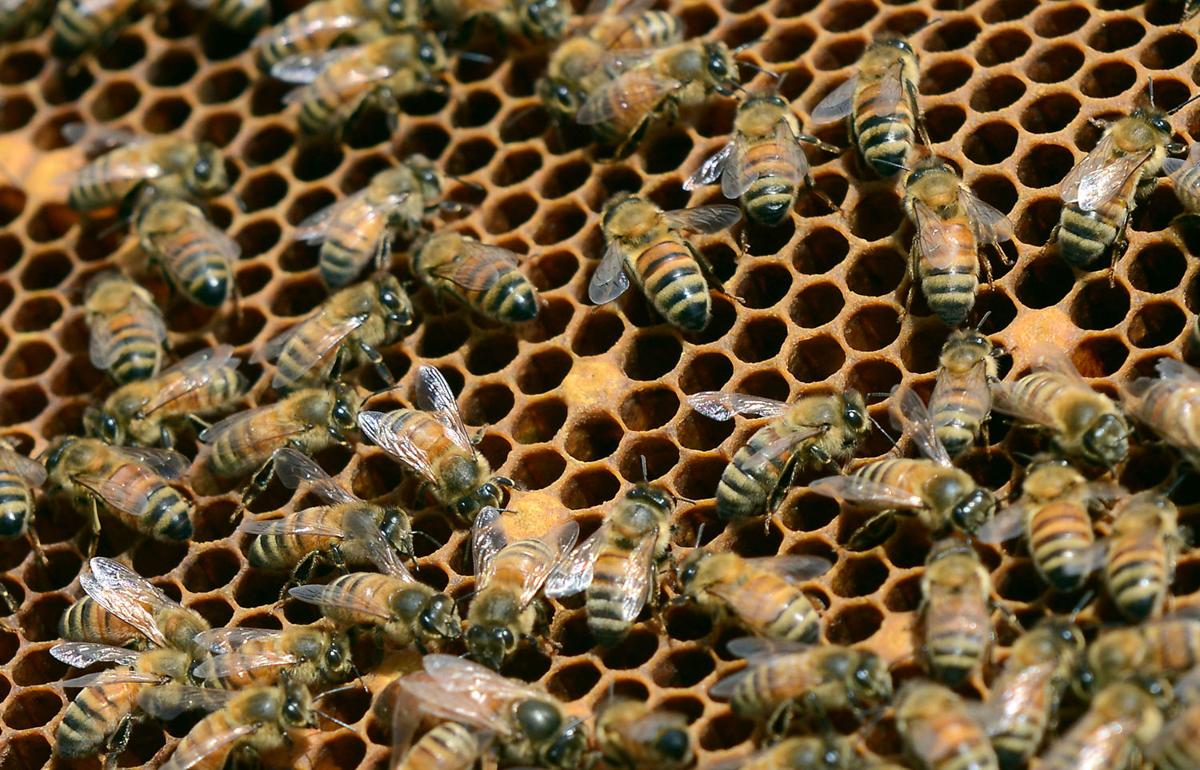 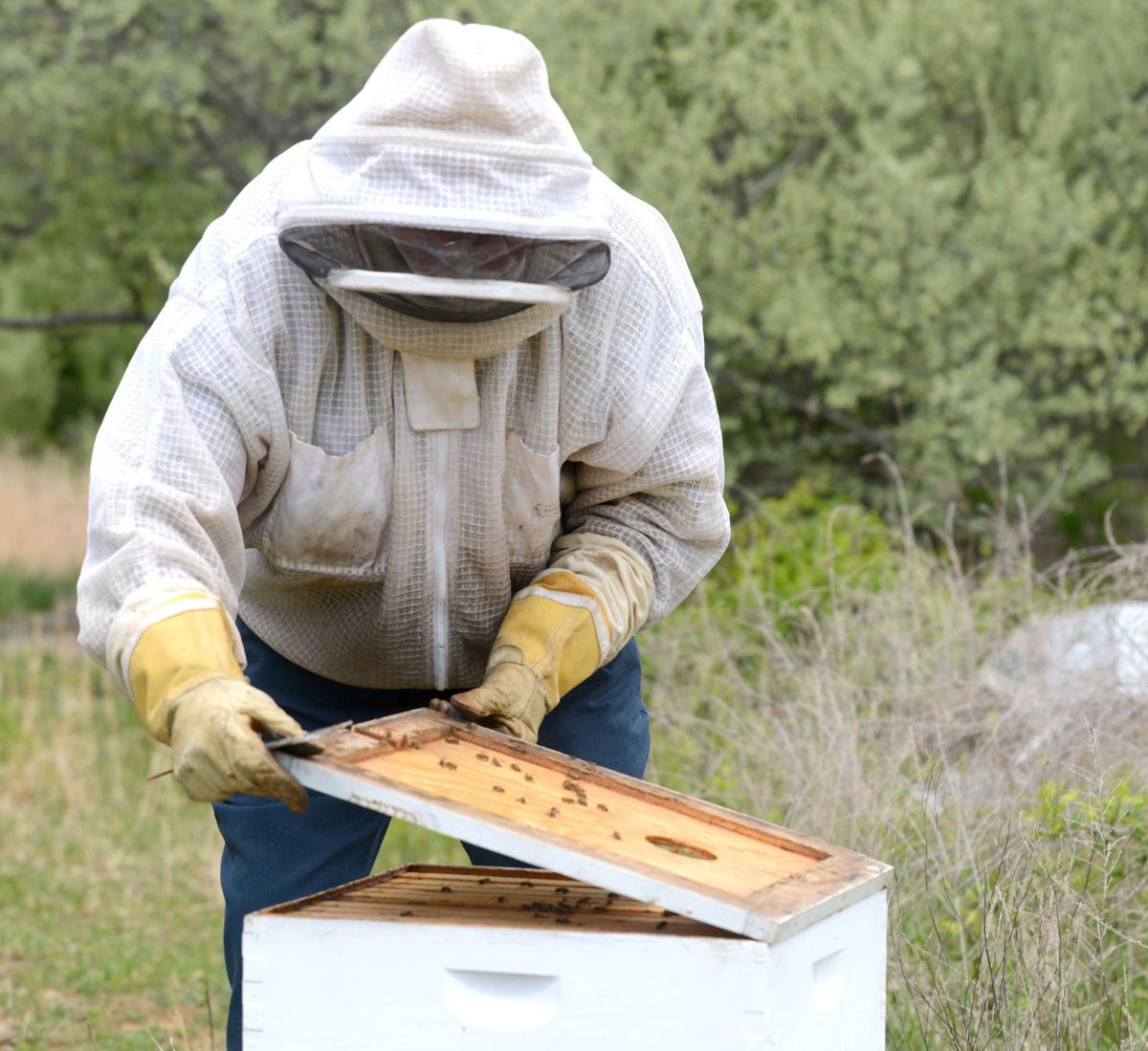 Poor Valley Bee Farm owner John Rhoton opens one of his hives to check on the bees. 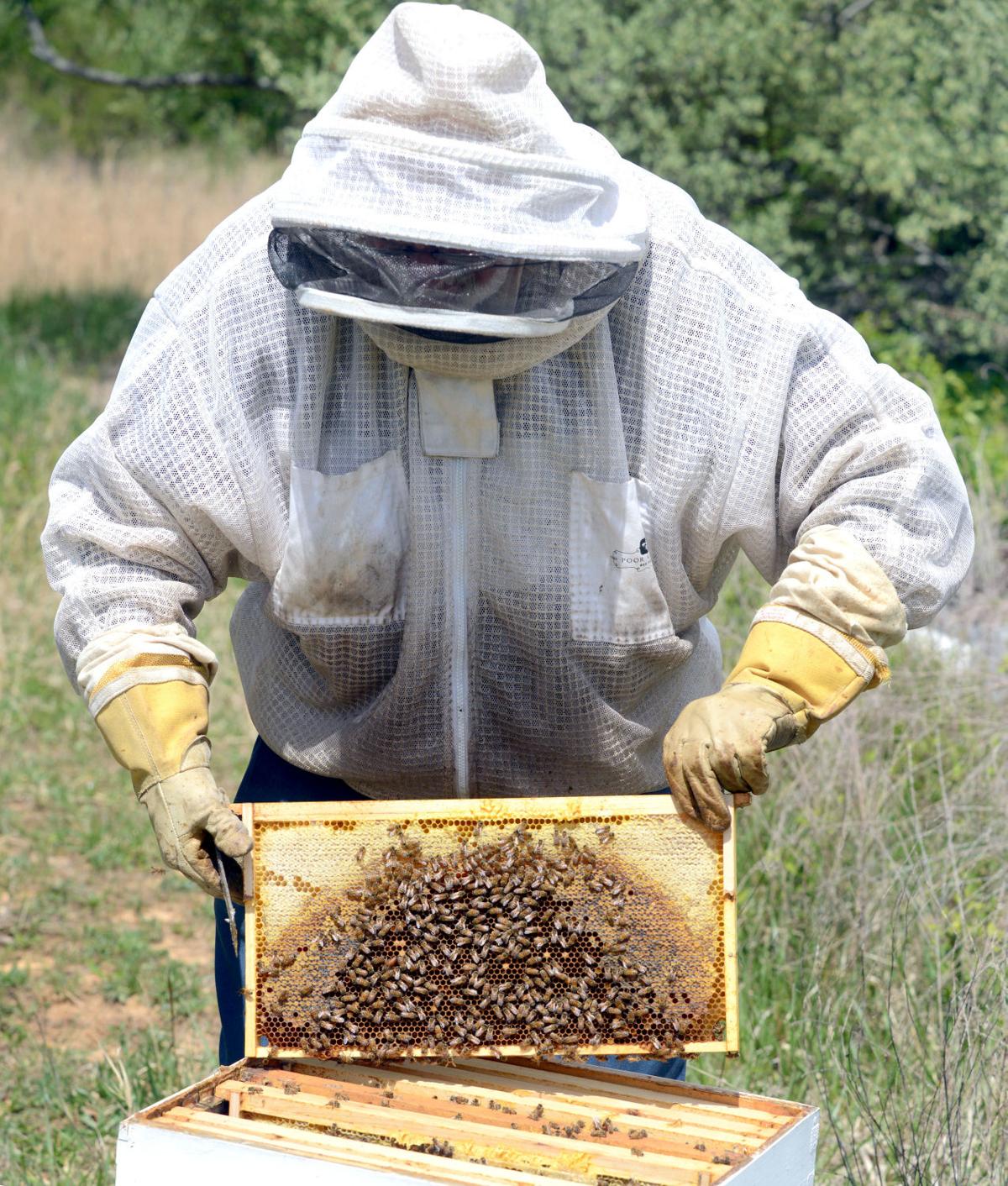 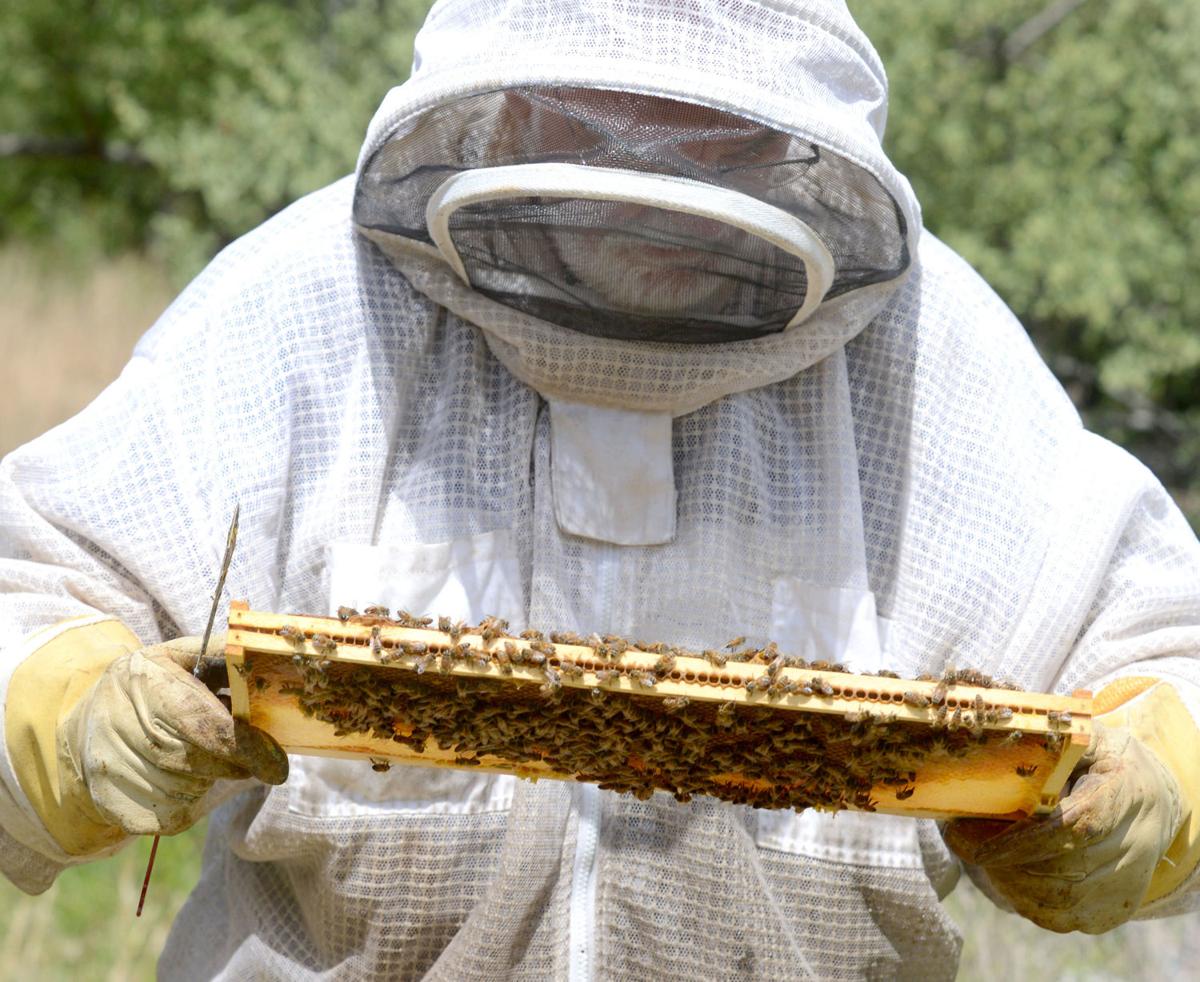 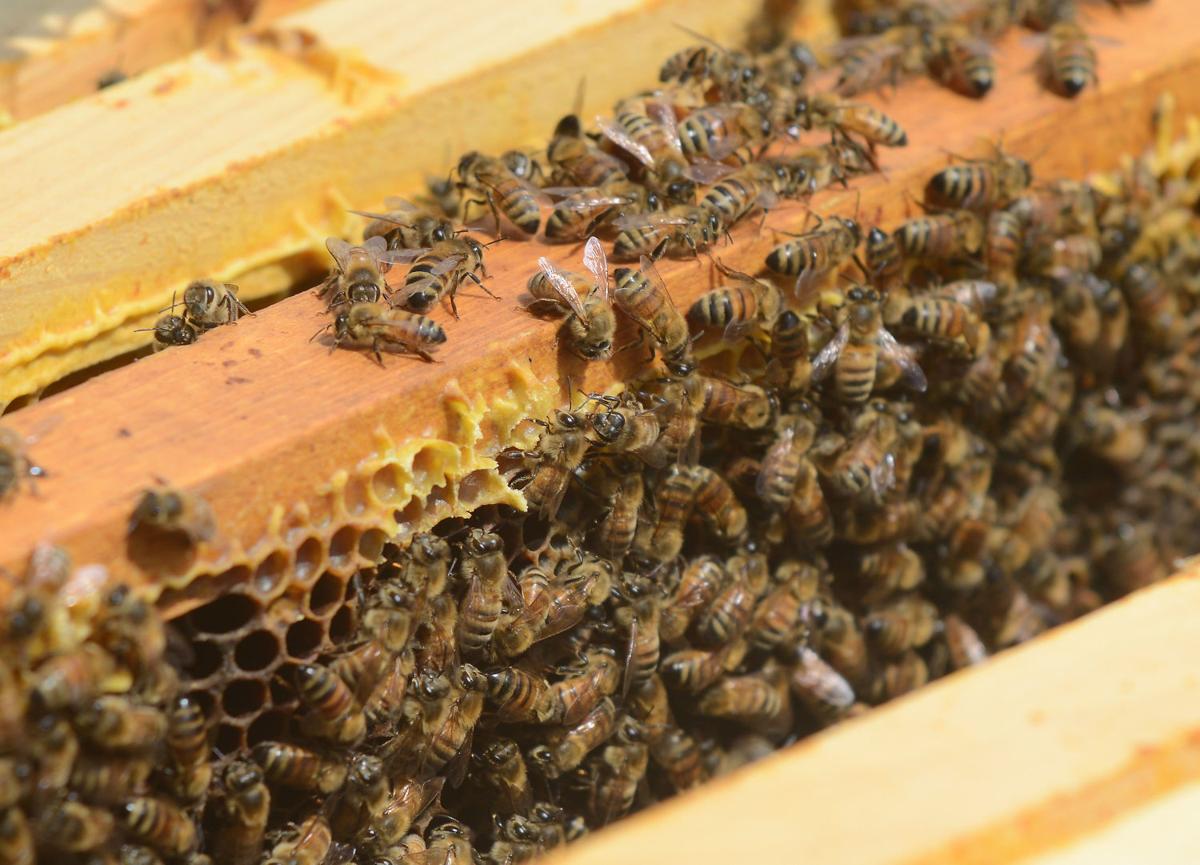 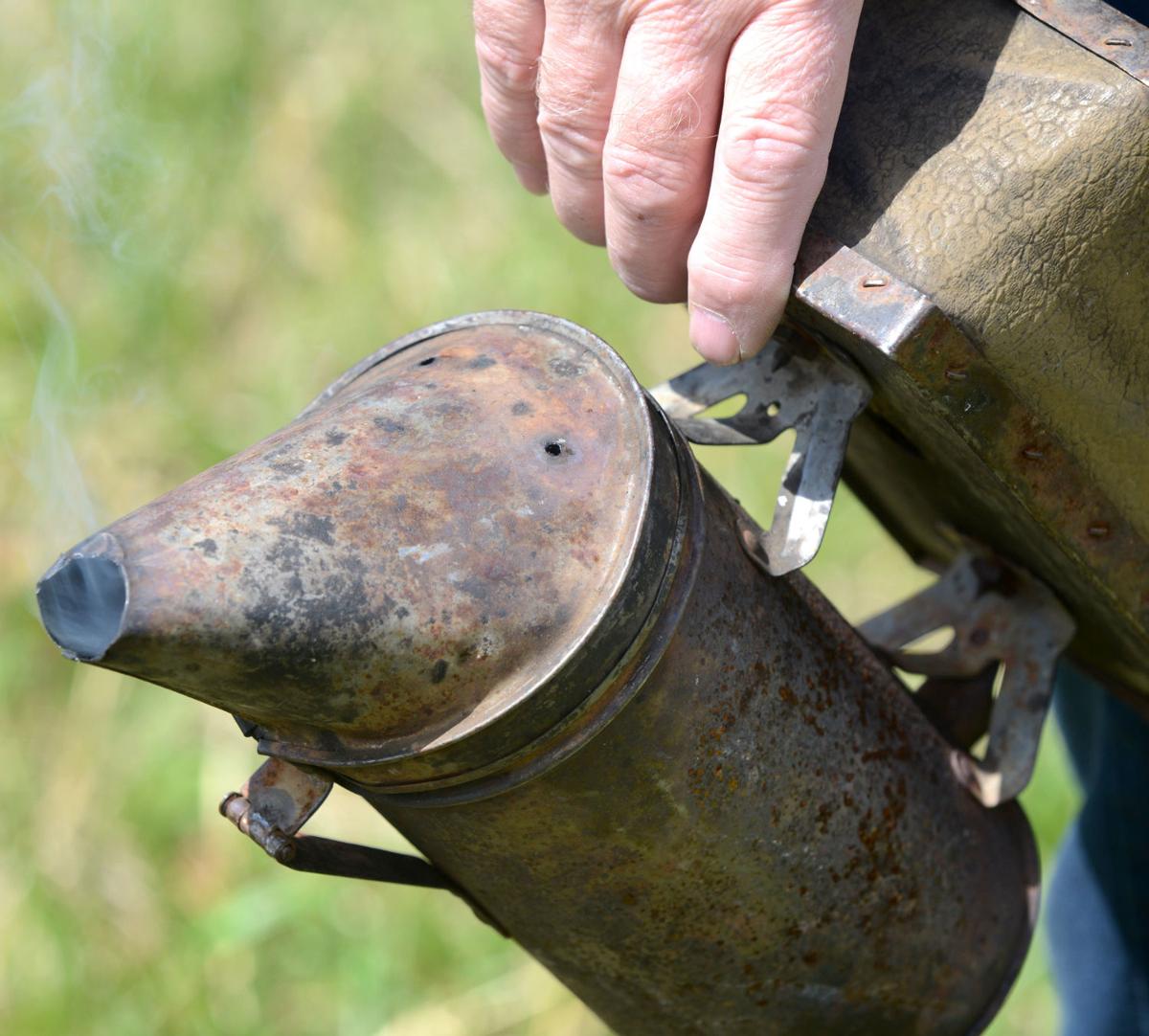 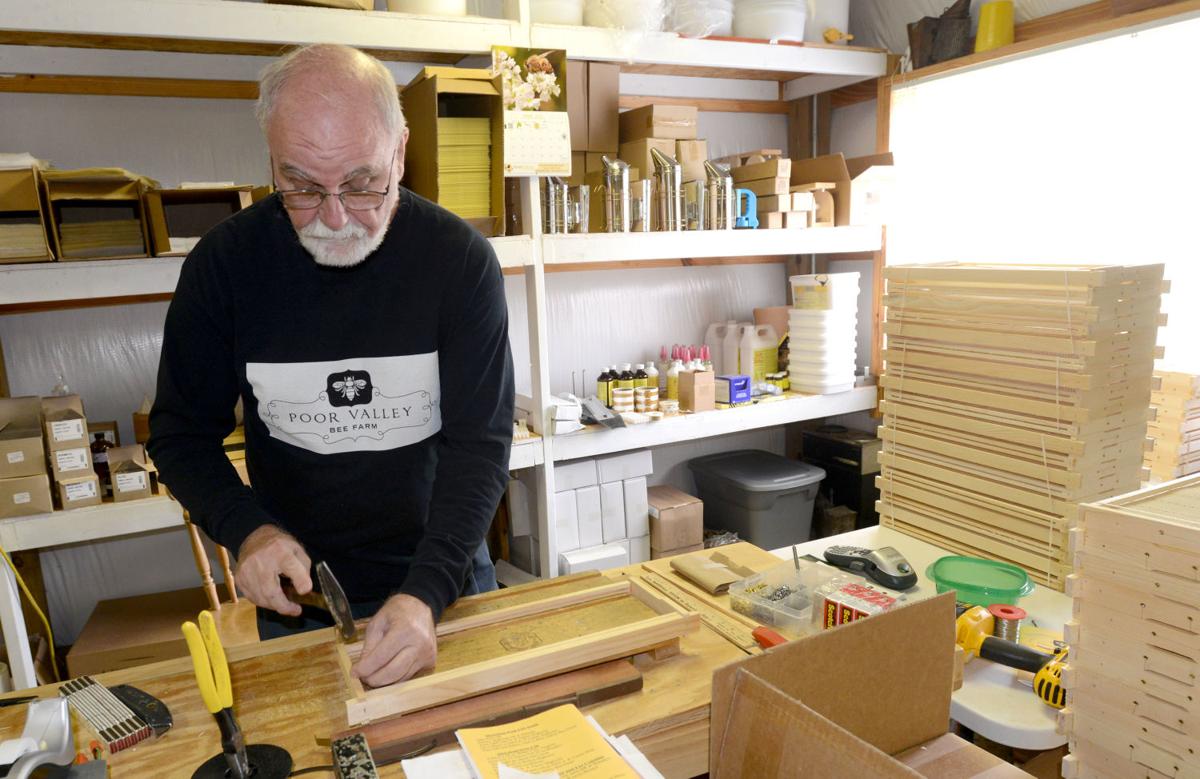 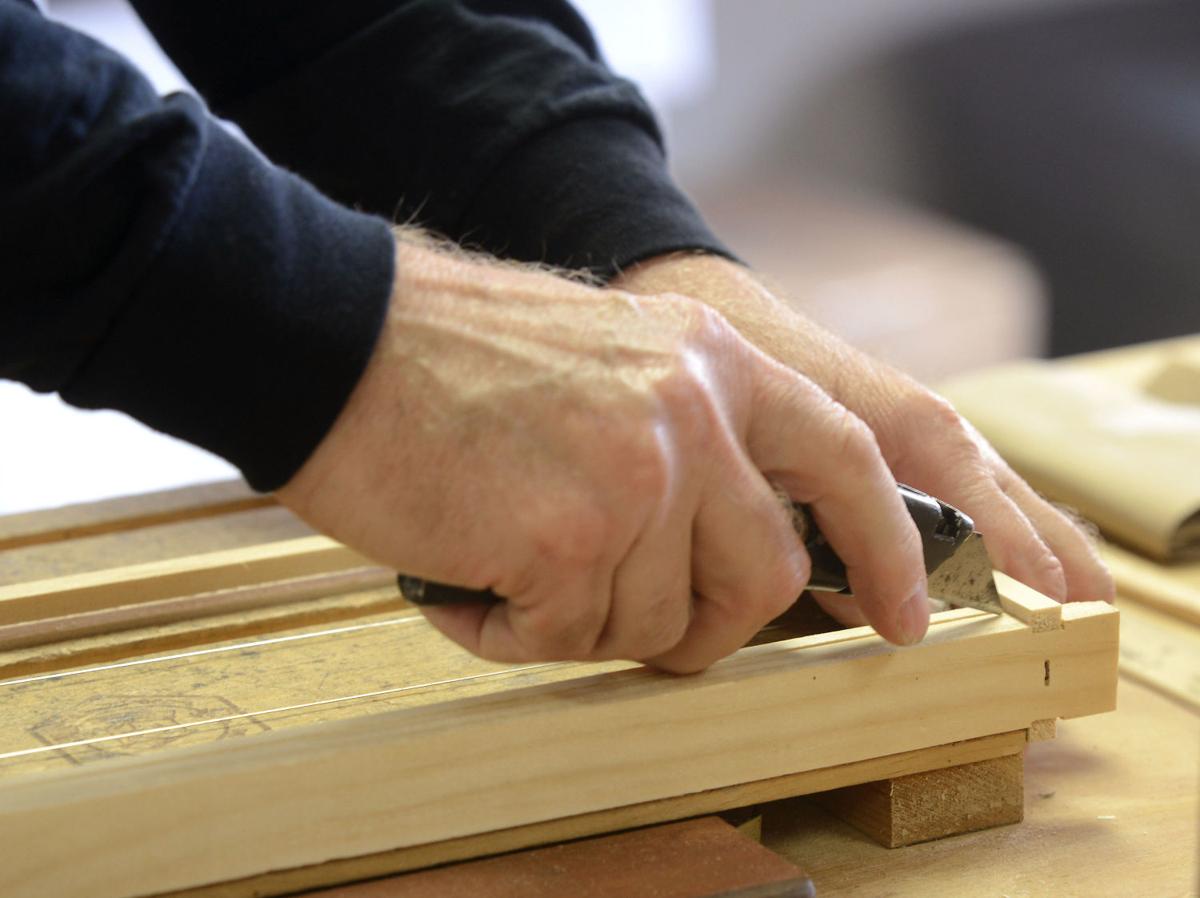 HILTONS, Va. — Wearing a white protective suit that included gloves, a coat, veil and hat, John Rhoton recently smoked the top of one of his wooden beehive boxes.

The smoke, which the Hiltons, Virginia farmer said calms the bees so he can safely check on them, is generated from the smoldering of fuels in the canister-like device.

After smoking the bees, Rhoton, the owner of Poor Valley Bee Farm along the A.P. Carter Highway near the Carter Fold in Scott County, wedged open the cover and removed it from the hive.

A number of the tens of thousands of bees that reside in the hive escaped, but most simply buzzed around Rhoton, likely protecting the colony. One by one, he then pulled out the individual screens on which the bees live. As he pulled the screens out, thousands of the hive’s bees, primarily worker bees, could be seen.

Rhoton, who said he’s been stung many times, worked with the honey-producing insects carefully, making sure not to disturb their work.

While checking each screen, he finally declared, “There’s her highness,” referring to the queen bee. The queen lives the longest in the colony and can lay about 2,000 eggs a day. She is protected by the female worker bees and mates with the male drone bees.

The hive was among four near Rhoton’s barn on the back of his farm. He owns dozens of hives, many of them spread across Southwest Virginia in order to properly pollinate.

He’s been around bees since he was around 8 years old.

“My dad and my grandfather and I know my great-grandfather had them. I was just a kid along for the ride. They kind of gave me my love for bees,” he said.

But he hasn’t always had bees, which he now says are a necessity. There are 20,000 known species of bees, including a variety of honeybees.

“Of course, life goes on,” he said. “I went into the military. I got away from it for a few years. I raised a family.”

After years of not caring for any hives, Rhoton said he realized there weren’t many bees around.

“I very rarely ever saw them,” he said. “When I was a kid, you couldn’t go barefoot without being stung. You would step on one of them.”

Like many local beekeepers, he started out with a couple of hives.

“I decided a few years ago that I needed to do something,” he said. “I thought I would get me one or two hives.”

“It’s kind of blossomed from there,” said Rhoton, a retired electrician who now has one of the largest bee farms in Southwest Virginia.

According to the University of Tennessee Institute of Agriculture, the value of crops benefiting from pollination exceeds $119 million each year in Tennessee.

“It is estimated that bees are important to one third of the food we eat and the value of pollination annually is $15-20 billion,” said Phil Blevins, extension agent for the Virginia Cooperative Extension office in Washington County, Virginia.

Blevins said he doesn’t have an accurate count of beekeepers in the area, but there are likely several hundred in the Mountain Empire.

“This would be mostly one and two colony beekeepers,” Blevins said.

“I thought that would keep you busy,” he said. “I kind of bit more than I can chew.”

From a large garage on his farm, Rhoton now builds beekeeping structures and equipment. Last year, he shipped products to all 50 states.

A lot of his customers are local. They range from children to 90 year olds. As he worked on a hive screen, he recalled a woman in her mid-80s who recently visited the farm.

“We have a lot of old beekeepers,” he said. “We need young beekeepers. Beekeeping has no age limit as long as you are physically able.” New beekeepers are advised to start off with a base hive. Rhoton said a deep hive body, about eight or 10 screens, is sufficient.

Some means to feed the bees nectar is also necessary. Jars, baggies and other items can be used.

“Take a little bit of advice, try it, and if it doesn’t work, try another way,” he said.

Beekeeping is not inexpensive, Rhoton said. It can cost $300-$400 to start. That pays for a beehive, a couple of honey supers and protective clothing.

“Most beekeepers are scared to death of bees,” said Rhoton, who wore protective gear as he opened one of his hives.

And most new beekeepers ask how they can keep from being stung, he added.

“You can’t” Rhoton said. “If you’re a beekeeper, you’re going to get stung. Sooner or later, the bee will find a weak spot. The slower and steadier you work, the less likely you are to get stung.”

Bees, he said, do not like noises or vibration. By nature, they are not aggressive.

The biggest challenge of beekeeping is keeping them alive. The average bee lives for 42 days.

“They’re short-lived,” he said. “They work themselves to death. They shed their wings. …If there is a honey flow going on, that’s all they’re interested in, is work.”

Worker bees have a variety of jobs, including preparation of cells, production of wax and feeding the queen. Rhoton noted that it takes about six pounds of nectar to make one pound of wax.

A queen typically lives for three or four years, although they once lived up to seven years. The queen has about three years of productivity.

Beekeepers must check to make sure the hive is productive and that it doesn’t get too crowded. If it’s crowded, it must be separated. The queen bee must also be checked.

The drone bees, males, mate with a virgin queen. They live to mate with the queen, but not more than one in a thousand gets the opportunity.

When he was younger, Rhoton said the bees practically took care of themselves. But with the introduction of pesticides and various bee diseases, he has to be “hands-on,” he said.

In recent years across the nation and around the globe, there has been increasing concern about serious losses in the honeybee population, with some sources reporting a loss of up to 30 percent in 2015 and previous years.

Rhoton said he loses about 10 percent of his bees each year for various reasons. Varroa mites and tracheal mites, two parasites, can destroy a hive by weakening the bees’ immune systems. Both parasites came to the United States in the 1980s and have managed to take beekeepers out of business.

Stress can also take a toll on bees. It can be caused by several things, such as transporting bees from one crop to another, by a dearth of nectar or pollen, which they need both to rear a brood and sustain the colony. A number of studies have shown that stressed bees can result in the loss of the hive.

Rhoton’s farm sells honey on the honor system. Visitors are asked to place money in a box when picking up the honey.

Those interested in starting beekeeping should contact their local municipality to determine whether it is legal. The cities of Bristol, Tennessee, and Bristol, Virginia, do not have any ordinances prohibiting beekeeping, officials said.

Washington County, Virginia, also does not have any ordinances specifically about beekeeping. County Attorney Lucy Phillips said if a person contacts the county to ask about initiating beekeeping activities on a particular piece of property, the county would have to consider the zoning implications.

The town of Abingdon has an ordinance regarding beekeeping that states no person shall keep, other than on his own premises, any hive of bees within 100 feet of any inhabited or occupied residence, hospital, sanatorium, public eating place, school, church, office building, store, hotel, apartment house, rooming house or any other place of habitation.

RICHMOND, Va. (AP) — Virginia agricultural officials intent on reversing the decline of managed honeybee populations are going on the road to …

Poor Valley Bee Farm owner John Rhoton opens one of his hives to check on the bees.