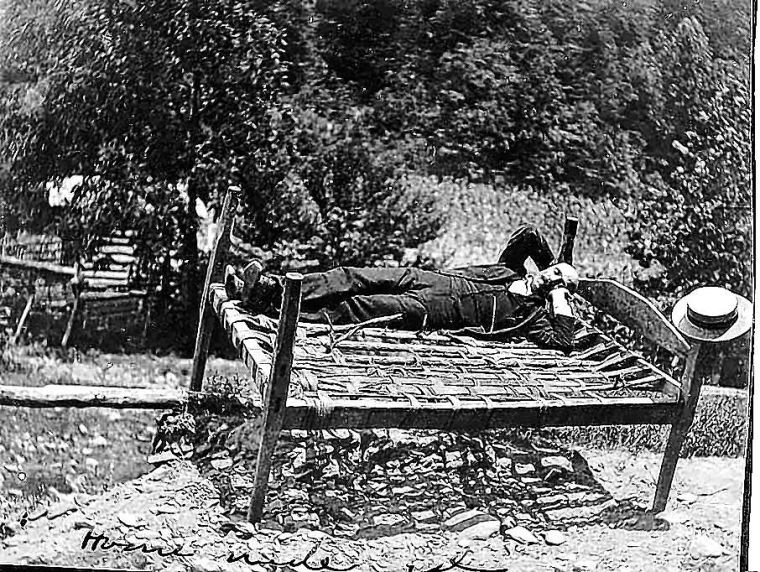 Crude beds continued to be made in this area long after far better ones were available in local furniture stores. Pictured here is a newly made bed by a Sharp’s Creek craftsman about 1920. It may be noticed that it is a little short for the man lying upon it. 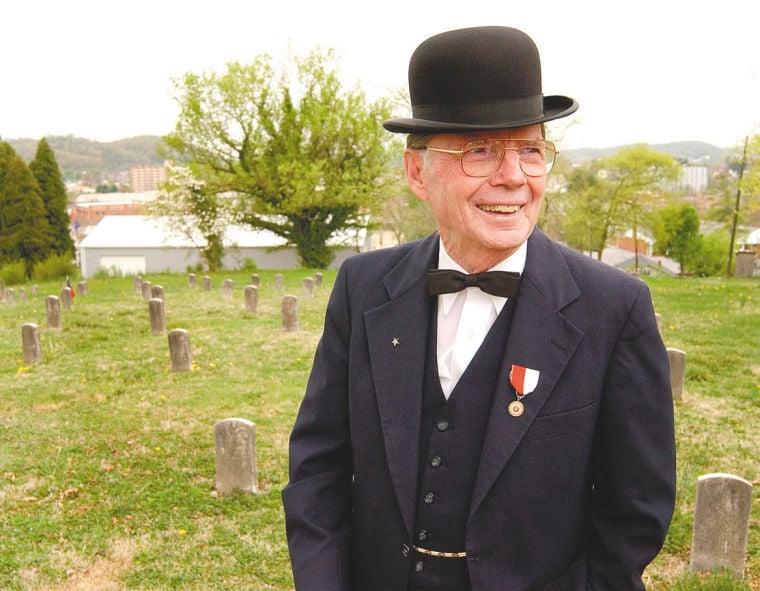 Bud Phillips has been tracking the history of Bristol and is pictured here at East Hill Cemetery.

BY BUD PHILLIPS | SPECIAL TO THE HERALD COURIER

I have recently written of homes of the pioneers. When they arrived here in the wilderness, shelter was a necessity. Of course, that shelter had to have a bed of some sort, and that bed often consisted of some type of crude makeshift material. Very few ready-made beds were at first brought here.

When it became possible to bring wagons into this very undeveloped country, space in them was very limited. Oftentimes, only one article of furniture was brought in a wagon and that usually consisted of a very highly valued piece.

Despite the fact early inventory listings from this area indicate beds and bedding as among the most valuable articles in early homes, usually it was not a bed. I know of one case where such a chosen article was a cherry corner cupboard. It still survives and is a treasured item in an old Bristol home. In another instance the chosen article was a blanket chest. It was hauled all the way from York County, Penn., to west Tennessee. In time it was brought to Jonesborough and finally brought to Bristol and is now a treasured item in the Jefferson Davis room here at Pleasant Hill.

One exception to the “no beds” rule was when the Susong family moved here from Rockbridge County, Va., in 1794. That family and many slaves came here in a great caravan of 20 or more wagons. In those wagons were several well built beds and bedding. I have been told that several of those old beds still sur-vive here in the Bristol area.

Some of the very early pioneers made out for a time with simply a pile of leaves for a bed. In many cases, there was only a packed dirt floor for support. Instead of making up the bed in the morning, I guess it was a matter of rearranging the leaves back into a suitable pile. I doubt that neatness meant as much to those early pioneers. A story passed down through the Laughlin family tells of a time when a pioneer bed of that type was being used. It was a very hot spell and the crude door of the cabin had been left open all night. After the man of the house arose, he was shocked to see a large copperhead snake crawling out of his leaf bed.

As time passed on, some pioneers built what was called a “shelf bed.” These consisted of a crude frame of poles attached to two walls of the corner of the cabin. These were a definite advantage to piles of leaves on the floor, but little advance. Shucks or hay or leaves were placed upon the shelves supported by these crude frames. Most pioneers spent the days in grueling labor so they could rest well about anywhere. That explains how they were able to sleep on such crude beds.

As the area developed, it became a fertile field for furniture makers and one of the greatest demands was for beds. One furniture maker (no one knows his name) living in or near what is now Paperville (at first known as Greenfield) made many beds for the area, some of them existing now. Col. James King early established a furniture shop at his estate, Holly Bend, 4 or 5 miles down Beaver near Bristol. His master craftsman turned out many beds, some of them bordering on the elegant. One of them is now considered worthy of being displayed in the fine home on Richland Avenue in Nashville Tennessee.

Even after beds were mass-produced and sold in numerous stores, a few local craftsmen continued to make beds, even into the 1900’s. Many of their early beds were of the rope type. Instead of slats, rope was used and stretched across the frame to offer support for the feather or hay “tick” mattress. They would be tightened with a tool when sagging bringing about the common phrase “sleep tight.”

Now a word as to bedding. After beds ceased to be piles of leaves, bags were made and stuffed with hay or shucks. A real luxury was a feather bed to place on top of that. It became somewhat of a status symbol when a family had a feather mattress for every bed. And what of covers for pioneer beds? Even though few beds were hauled into the area, most of these settlers did have covers, mostly consisting of woven blankets. Then came the golden age of overshot coverlets and grand hand stitched quilts. Even in the late 1700’s, an itinerant weaver named Cripple Jack Laughlin was weaving bedspreads in this area. His were mostly white with hand tied knots and lace 8-10 inches long. Some of his work may yet be seen in the Crab Orchard Museum in Tazewell Virginia.

By the time Bristol got underway, beds were critical. Joseph Anderson offered them from the elegant and expensive to the very common and cheap. Later would come iron and brass beds in endless varieties and price ranges. As late as 1913, I know of a couple who, when starting housekeeping, bought two wooden beds of the economy class. The cost for both was only $5.

When you go to bed tonight, be thankful that it is not a pile of leaves on a dirt floor of a cold cabin. You likely have ancestors who did that very thing.

Bud Phillips is a local historian and author. He can be reached at 276-466-6435. For more about Bristol’s history, visit www.bristolhistoricalassociation.com.

Crude beds continued to be made in this area long after far better ones were available in local furniture stores. Pictured here is a newly made bed by a Sharp’s Creek craftsman about 1920. It may be noticed that it is a little short for the man lying upon it.

Bud Phillips has been tracking the history of Bristol and is pictured here at East Hill Cemetery.