It's hot. The official start to summer happens tomorrow, but it already feels like we are in the middle of it.

Temperatures moderated somewhat over the weekend, so we caught a tiny break from the oppressive heat from last week, but here we go again. We are in for another heat wave, right on the heels of the last.

"It is somewhat unusual to have two strong, large-scale heat waves occur in quick succession in the same region of the country," said Alex Lamers, Warning Coordination Meteorologist for the Weather Prediction Center (WPC).

While rare, Lamers mentioned it is not unprecedented.

Last June, back-to-back heat waves impacted the western US, but this June we just happen to be seeing something similar in the central and eastern regions of the country.

"In fact, just last year, in June 2021, a significant heat wave affected the Southwest US in mid-June, followed by the extreme late June heat wave that produced all-time records in the Pacific Northwest and a national heat record in Canada," Lamers recounted.

Anyone who lived through the heat wave last year, remembers it well. The Pacific Northwest has not enjoyed their taste of summer yet this year.

If you want to get technical, "summer" doesn't start until tomorrow, even though the rest of the country has already been feeling like it in a big way.

The summer solstice, when we officially turn our seasonal clocks to summer, occurs at 5:14 a.m. ET Tuesday, which also marks the longest day of the year. It will be a long, HOT day for millions to kick off the summer season.

If you think this year's spring to summer transition has been blazing, you are right.

"We have seen a record number of heat advisory products through June 19 across the United States since at least 2006," Lamers pointed out.

With more than 100 daily high temperature records expected to be broken this week across the country, it may not be a trend you want to see. But climate change is pointing toward it becoming the new normal, especially for the month of June.

"The Fourth National Climate Assessment expressed very high confidence in the increase in annual average temperatures over the United States, and the effects of climate change also extend to an observable increase in warmer June temperatures," Lamers reported.

Lamers noted June 2021 was the warmest in the Lower 48 since records began more than a century ago. Four of the five warmest Junes have occurred in the past decade.

"A clear upward trend is evident in average June temperatures over the past century," Lamers stressed.

Also, the fact we are in a La Niña pattern does not help. La Niña is a natural ocean-atmospheric phenomenon marked by cooler-than-average sea surface temperatures across the central and eastern Pacific Ocean, near the equator, which consequently affects weather across the world.

One way it affects the US is by bringing much of the country warmer-than-normal summers.

While we moan and groan about how hot it will be, it shouldn't be taken lightly. Heat is the leading weather-related killer in the US, so it's important to take care of yourself and others during heat waves.

"Heat stress on the body has a cumulative effect, and people should be especially cautious in situations when heat is expected to persist for multiple days, and especially when there is a lack of cooling at night," Lamers pointed out. "This means heat can even become a danger to your health after the hottest day in the heat wave."

While last week's heat wave started in the Southwest and spread eastward, this week the heat will begin in the northern Plains and then progress into the Ohio Valley, and down to the Southeast through the week.

"Like last week, we are mostly seeing the potential for daily temperature records, rather than monthly or all-time records," Lamers emphasized.

Highs will run 10-20 degrees above normal this week. Around 70% of the US population will see a 90-degree or higher temperature this week and nearly 20% will see 100 degrees or higher.

It's only the start of summer, and this summer is forecast to be a hot one.

How to stay cool without air conditioning

Tips for staying safe in the heat this summer

Take a cold shower or bath

Use cold washrags on your neck or wrists

Close your curtains or blinds

Sleep in the basement

Close the doors of unused rooms

Use the exhaust fan in your kitchen and/or bathroom

Cook in the morning, with a slow cooker or outside

Research what your state offers

Excessive heat causes more deaths in the U.S. than hurricanes, flooding and tornadoes combined. It's especially dangerous for America's homeless.

5-year-old boy dies after being left in car while his mother prepared for birthday party, police say

A 5-year-old boy died after his mother left him inside a car outside the family's home in Houston while she prepared for her daughter's birthday party, police said. 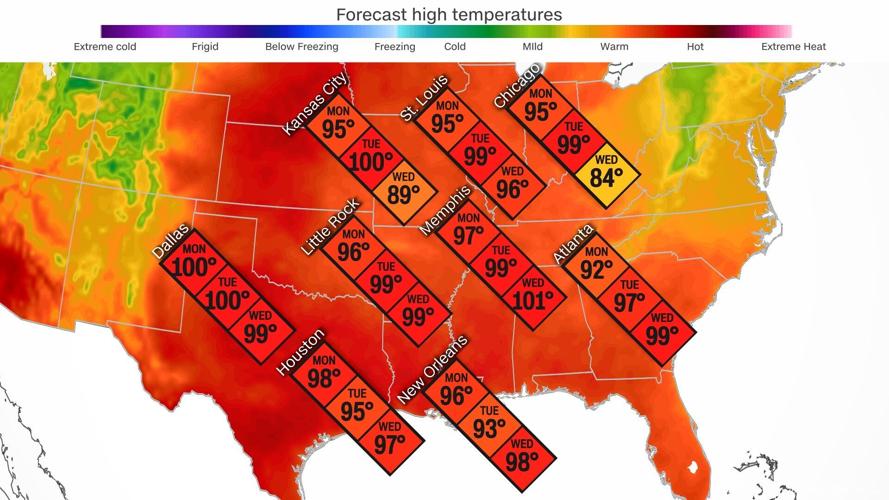