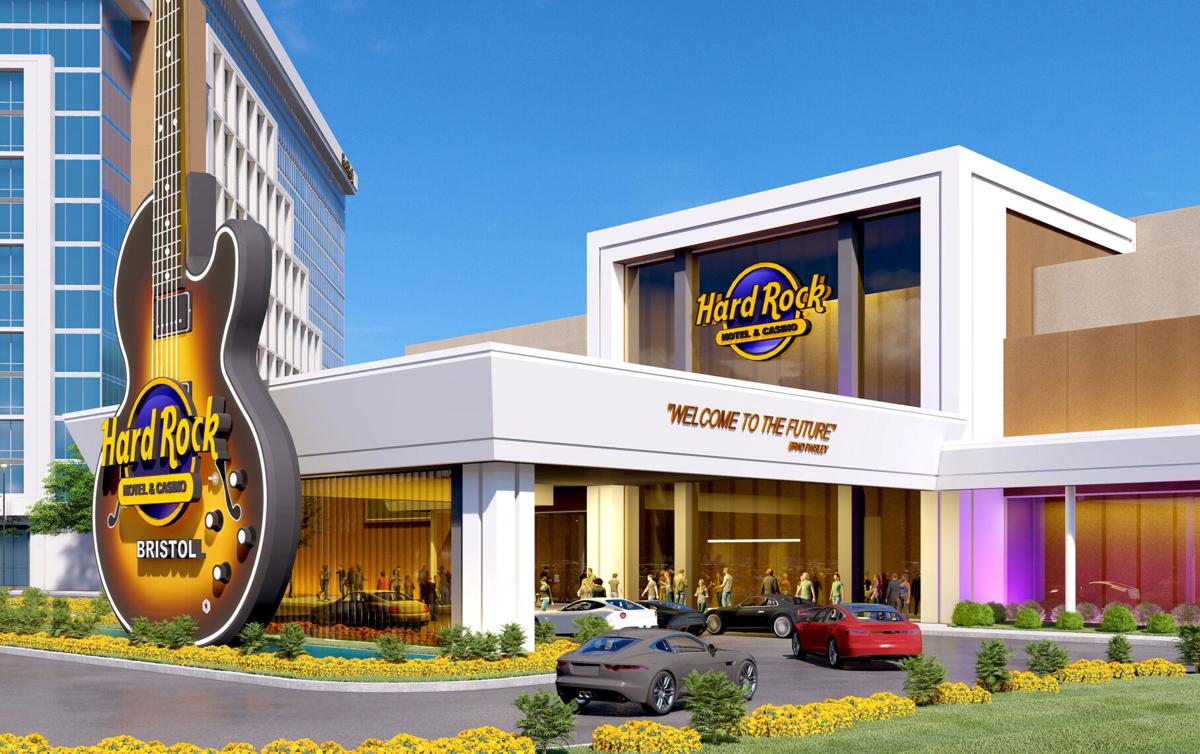 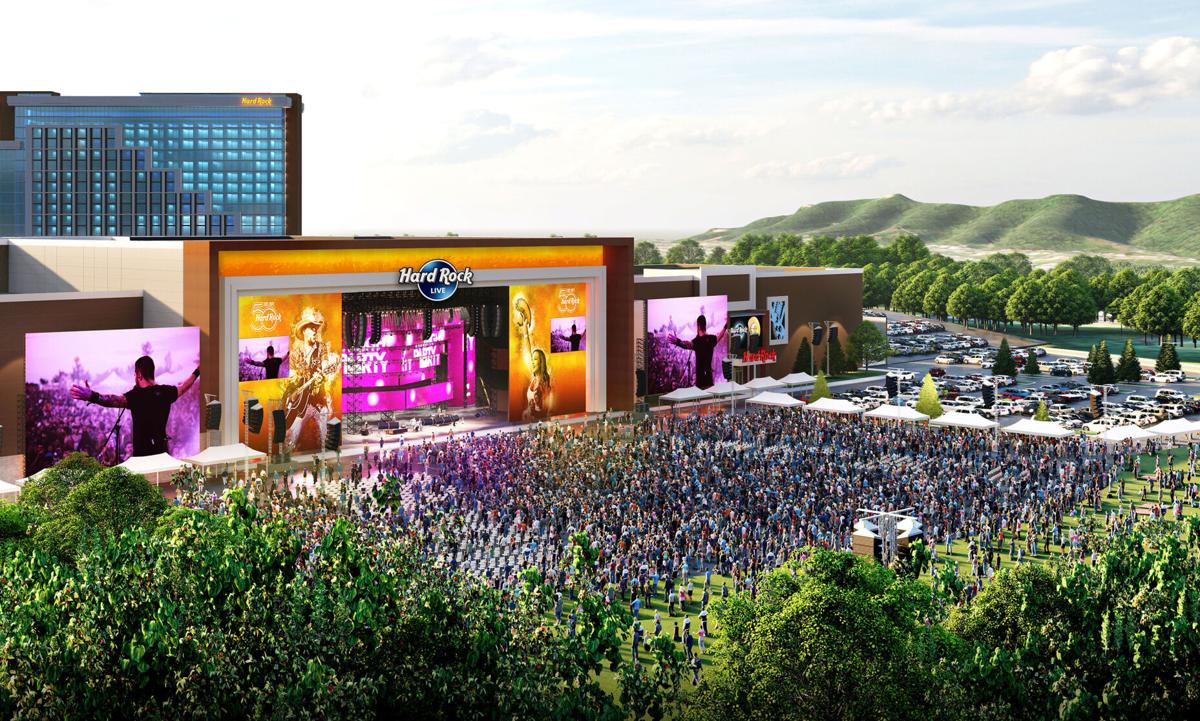 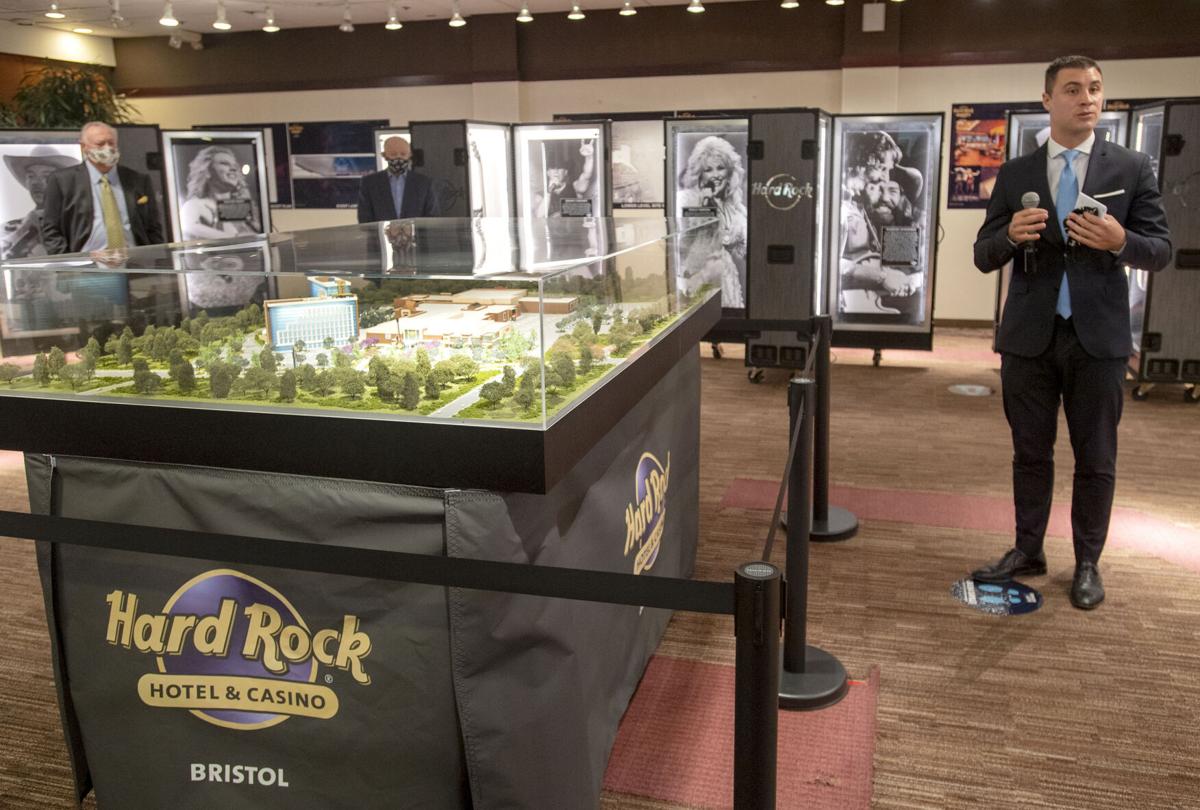 Hard Rock Senior VP Business and Casino Development Sean Caffery, right, speaks after the unveiling of a 3-D model of the proposed Bristol Hard Rock and Casino at the former Bristol Mall location. 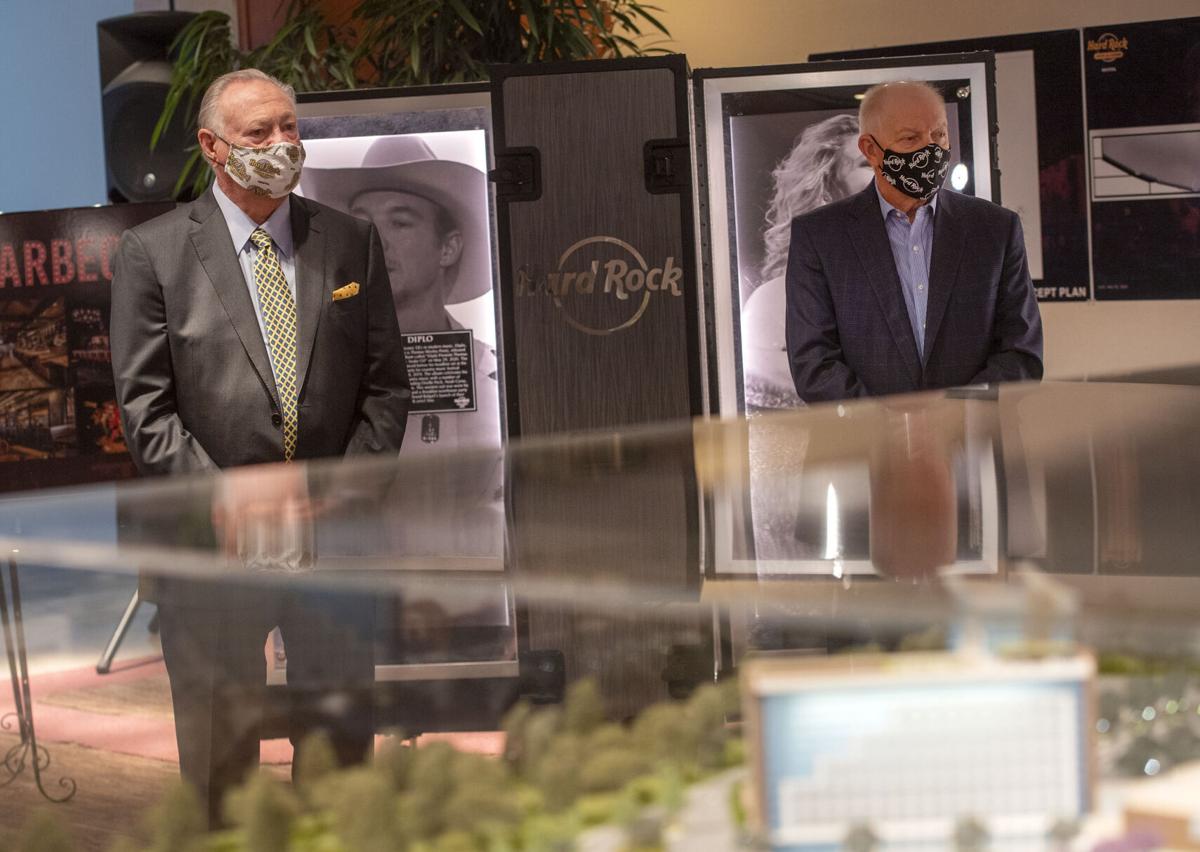 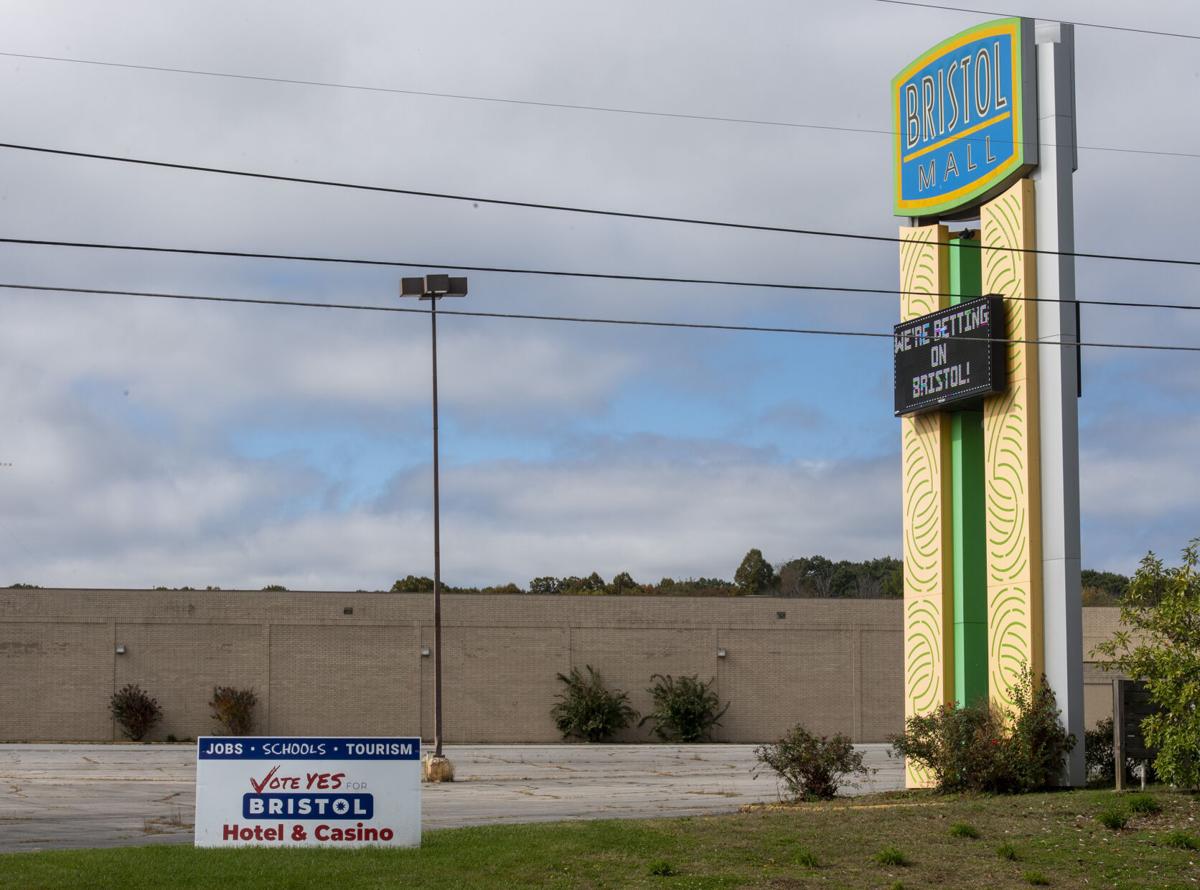 The Bristol Casino referendum will be decided in the November election. 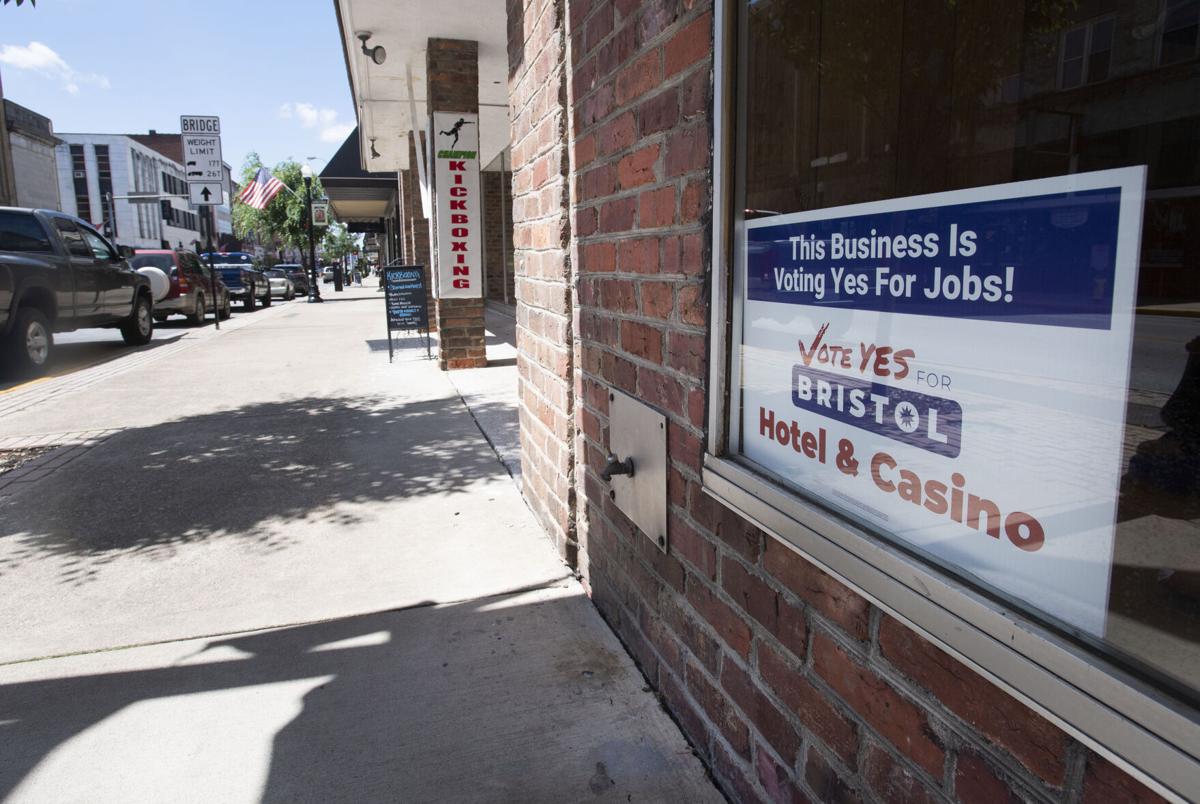 A sign in favor of the Bristol Hard Rock Casino 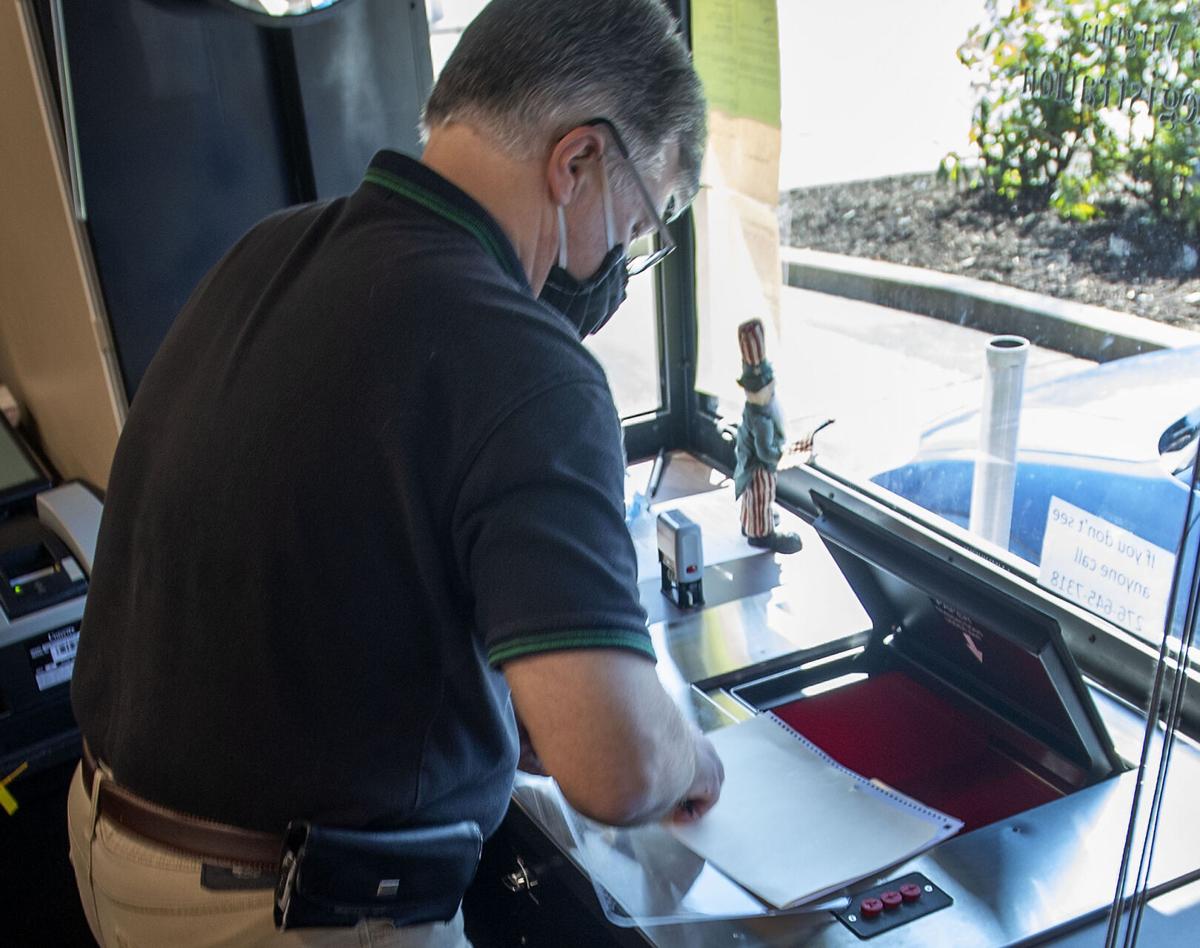 Bristol Virginia Deputy Registrar Jeff Miller accepts a ballot at the drive-up window during the early voting period for the election.

BRISTOL, Va. — While the nation’s attention is largely focused on the race for the White House, Bristol, Virginia voters are poised to decide the fate of a proposed $400 million Hard Rock Hotel & Casino resort.

Bristol is one of four economically challenged cities — along with Danville, Norfolk and Portsmouth — currently conducting casino referendums. Richmond opted to delay its referendum.

Local businessmen Jim McGlothlin, chairman and CEO of The United Co., and Clyde Stacy, CEO of Par Ventures, joined forces in August 2018 to try and secure the approvals necessary to bring a “moon shot” project to the Twin City. It took two years to push this opportunity for limited casino gaming through the state’s General Assembly and secure the signature of Gov. Ralph Northam.

Last November, McGlothlin and Stacy announced that Florida-based Hard Rock International would serve as the operating partner for the facility. Hard Rock operates about 250 venues in over 75 countries, including nine casinos in the U.S., Canada and the Dominican Republic with four more — not counting Bristol — in development.

“Hard Rock has received a tremendous outpouring of support from the community and Bristol,” according to a statement from Hard Rock International. “We hope the turnout for voting looks like the wonderful turnout we had for our events during our community engagement. We look forward to delivering a first-class product that the community of Bristol can be proud of.”

Locally, much of that vote is already in.

More than 4,503 votes have already been cast in Bristol through Virginia’s initial foray into early in-person voting and wider use of absentee ballots, General Registrar Penny Limburg said Saturday, after early voting concluded.

The city has 11,723 registered voters and turnout during recent presidential elections historically hovers around 7,000.

The last chance for voters is Tuesday, when all four city voting precincts open at 6 a.m. and remain open until 7 p.m.

The referendum would allow a Hard Rock-branded casino and 350-room luxury hotel to operate at the Bristol Mall site on Gate City Highway. The once-thriving retail mall has been vacant for several years — save for the recently opened Dharma Pharmaceuticals, which is expected to relocate — and efforts to attract other business or industry proved fruitless.

The backers are requesting no public money, tax breaks or incentives of any kind for what is expected to be up to a $400 million investment.

Earlier this year, the Virginia Lottery Board precertified Hard Rock International to serve as the Bristol casino operator, but the state board must still finalize all of its regulations to govern casino gaming. At that point, Hard Rock would apply for a state gaming license and the review and the approval process could take up to 12 months.

Plans include the hotel, which could be expanded to 700 rooms, a 3,200-seat indoor entertainment venue that could open out onto an outdoor amphitheater that accommodates up to 20,000 people for concerts and other live entertainment. It would also include restaurants, bars, shopping, a pool, spa, music- and sports-themed attractions and a conference and meeting center — all on the 47-acre mall campus.

Hard Rock officials say their plans include tying in their brand with the Twin City and region’s legacy of country, bluegrass and other forms of roots music.

If voters approve the referendum and a license is secured, organizers hope to open a temporary casino in the mall’s former Belk space by late 2021 with the full resort expected to open in 2022.

A Bristol casino is forecast to employ between 1,000 and 2,000 people, according to a 2019 Virginia Joint Legislative Audit and Review Commission report, but that estimate was based on an investment that was substantially less that what is currently proposed.

A 2018 Chmura Economics and Analytics study forecasts that total casino resort employment could top 5,000 by 2027.

Casino backers say the average wage for employees would be $46,000 annually, based on wages paid at casinos around the nation.

The city’s September unemployment rate was 6.8%, which is higher than the Bristol-Kingsport region’s 5.5% rate and Virginia’s 6.2%, according to the U.S. Bureau of Labor Statistics. One year ago, the city’s jobless rate was 3.5%.

This project is also forecast to generate between $15 million and $21 million annually in new tax revenues for the city through existing meals, lodging, local sales, admissions, business, professional and occupational licenses and property taxes.

The casino legislation imposes an 18% tax rate on the first $200 million of net gaming revenue with 12% going to the state and 6% going to the locality. Using the $130 million estimate, the 18% levy would generate $23.4 million in annual tax revenue. Of that, the state would receive $15.6 million and the local share would be $7.8 million.

As part of the legislation, Bristol is to divide local gaming tax revenues with the localities served by the Virginia Department of Transportation’s Bristol District. The legislation establishes the “Regional Improvement Commission,” which would receive the entire local share and distribute it among Bristol and the counties of Bland, Buchanan, Dickenson, Grayson, Lee, Russell, Scott, Smyth, Tazewell, Washington, Wise and Wythe, plus the city of Norton.

Those figures, along with the attendant spending, have the attention of the Bristol Chamber of Commerce and its Discover Bristol tourism division, which is forecasting that the influx of visitors to the casino resort could equate to economic stability for other hotels, restaurants and retailers ravaged by the 2020 impacts of the COVID-19 public health pandemic.

The committee has distributed multiple mailings, conducted a social media campaign, website, TV commercials and print advertising, publicity surrounding a scale model of the project and organized a coalition of business owners who support it. That list includes the Bristol Chamber of Commerce, Friendship Enterprises, Permatile Concrete Products, The Bristol Hotel and more than 40 other privately owned businesses on both sides of the state line, including many from the Twin City’s downtown.

A coalition of emergency workers that includes city Police Chief John Austin, Fire Chief Mike Armstrong and about 20 current and former police, fire and other emergency responders, is touting the positive impact casino tax revenues could have on budgets, resources and staffing.

“I can’t see anything good, long-term, coming from a casino,” Pastor Scott Price of Fellowship Chapel church told the Herald Courier. “We’re just trying to remind people, from our perspective, the negatives we see just as proponents of it are seeking to remind people of what they believe to be the positives.”

The casino developers have said they will do everything in their power to eliminate any problems and note that the facility’s operating license will be subject to constant review by state regulators.

The enabling legislation also sets aside a portion of state revenues to fund programming to assist people with gambling issues.

Caesars agreed to pay the city $15 million within 30 days of a positive referendum vote and to acquire the property for $5 million by the end of 2020, according to its agreement with the city.

Caesars further guarantees a minimum of $5 million in gaming tax revenue each year for every full year Caesars is in operation and to provide an annual supplemental payment directly to the city, based on a percentage of net gaming revenue, projected to be about $12 million each year, according to information from the city of Danville.

Caesars forecasts the facility would generate $38 million per year in new tax revenues.

Voters in Norfolk will have their say about a proposed casino hotel complex planned for a 13.4-acre site along the banks of the Elizabeth River and managed by the Pamunkey Indian Tribe. It is expected to represent a $350 million to $500 million investment and provide between 200 and 300 hotel rooms. Specific plans haven’t been finalized.

This casino is now forecast to generate between $24 million and $44 million in annual tax revenues, depending on the scope of the project, according to a September 2020 report by the Norfolk Mayor’s Committee on Gaming.

“Market conditions for gaming in Hampton Roads suggest that $24.8 million is the absolute minimum the project would generate [annually],” according to the report.

The total includes an estimated $16 million to $32 million in new gaming tax revenue and between $8 million and $11 million in taxes from restaurant meals and hotel rooms.

Last month, the tribe announced it has hired HKS Architects, an international design company known for AT&T Stadium in Dallas and the MGM National Harbor Casino, and Baskervill, a Richmond-based construction, engineering and design firm.

If approved, construction is expected to begin in 2021 and the facility would open in 2022.

The proposed Rivers Casino Portsmouth would be operated by Rush Street Gaming of Chicago and represents a potential $300 million investment along Victory Boulevard and Interstate 264. The 400,000-square-foot complex is expected to include a hotel, conference center and multiple restaurants.

It is forecast to generate $16 million annually in new tax revenues, according to the city. The 50-acre site is owned by the city and Rush Street has agreed to buy it for $10 million, once it receives a state casino operating license, according to the development agreement. The project is forecast to generate 1,400 temporary construction jobs while being built and more than 1,300 permanent jobs once open.

The Washington County Sheriff's Office has recovered the remains of Athina Hopson in the Mendota area. She was reported missing in 2019. James Michael Wright, who remains in Southwest Regional Jail in Abingdon, is charged in her death.

Residents of Virginia’s Mount Rogers, LENOWISCO and Cumberland Plateau health districts can now fill out an online survey to join a waiting list for COVID-19 vaccine appointments, the districts said in news releases.

Eastman Chemical Co. — one of Tennessee’s largest employers — plans to spend about $250 million to build one of the world’s largest plastic-to-plastic molecular recycling facilities in Kingsport.

Bristol's long tie and deep history of country music dates back nearly 100 years, but lots of music is still being recorded at four studios in downtown Bristol.

No name-calling, personal insults or threats. No attacks based on race, gender, ethnicity, etc. No writing with your caps lock on – it's screaming. Keep on topic and under 1,500 characters. No profanity or vulgarity. Stay G- or PG-rated.
1 of 12 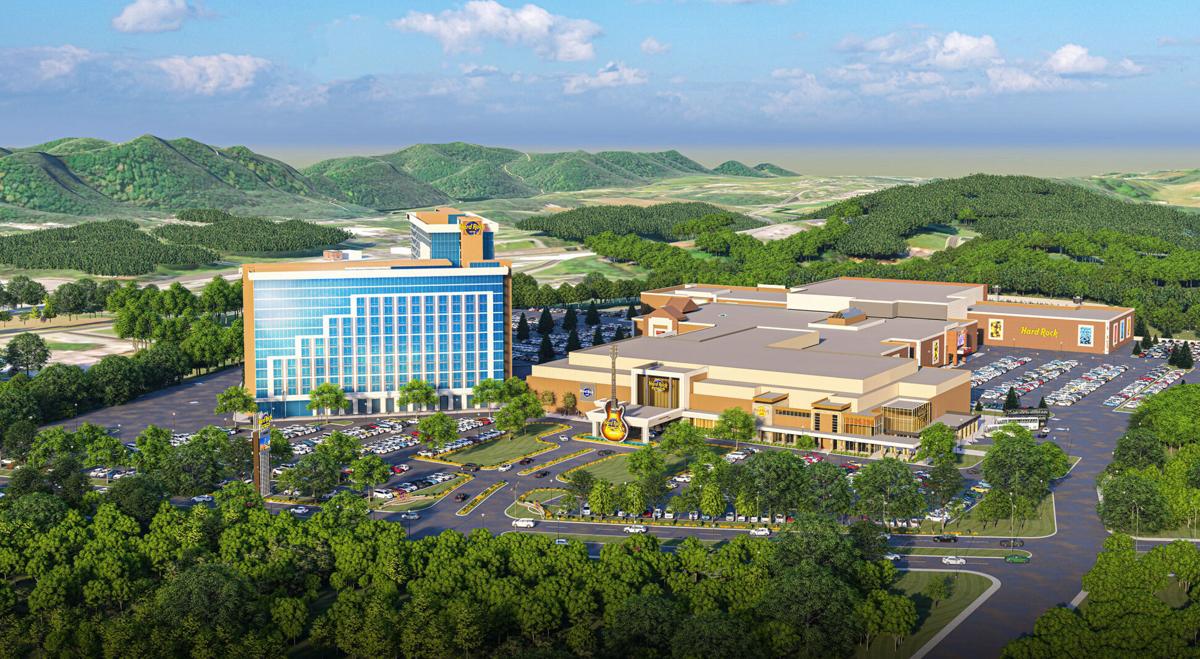 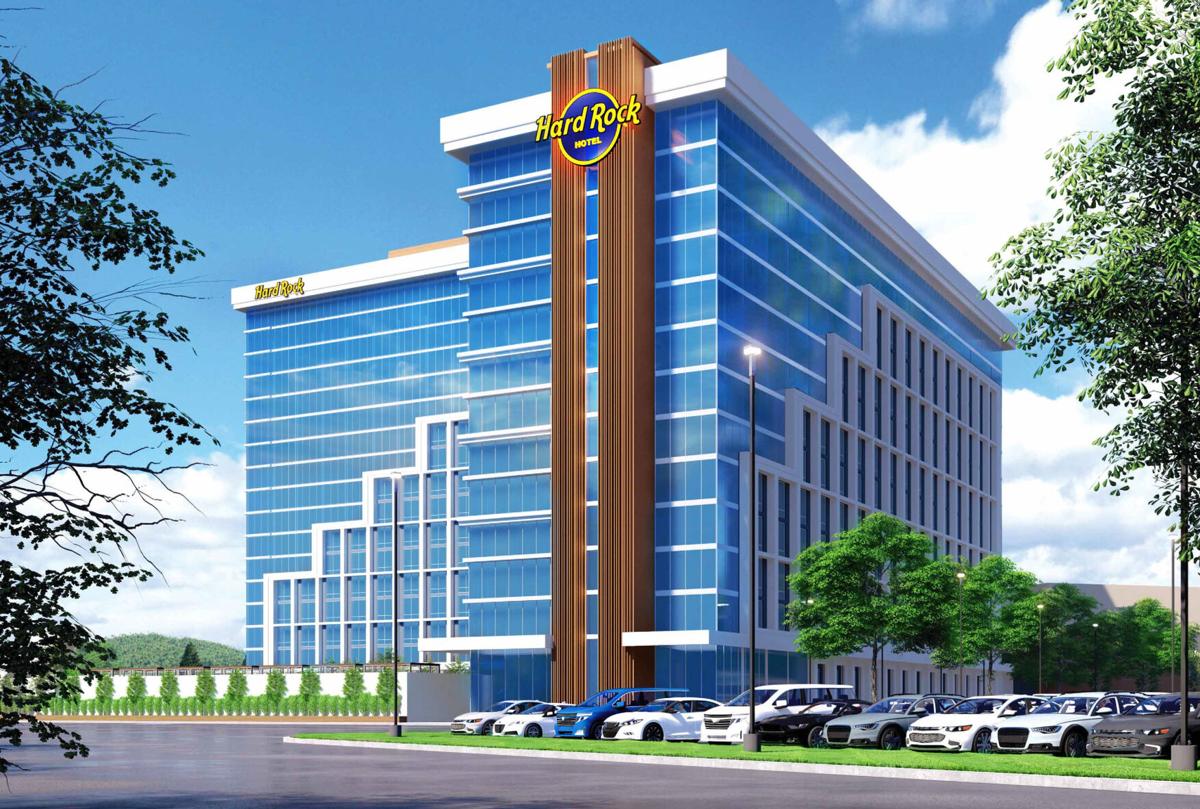 Hard Rock Senior VP Business and Casino Development Sean Caffery, right, speaks after the unveiling of a 3-D model of the proposed Bristol Hard Rock and Casino at the former Bristol Mall location.

The Bristol Casino referendum will be decided in the November election.

A sign in favor of the Bristol Hard Rock Casino

Bristol Virginia Deputy Registrar Jeff Miller accepts a ballot at the drive-up window during the early voting period for the election. 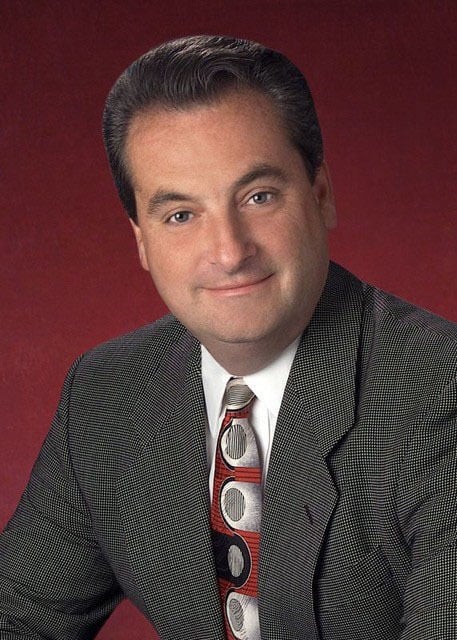 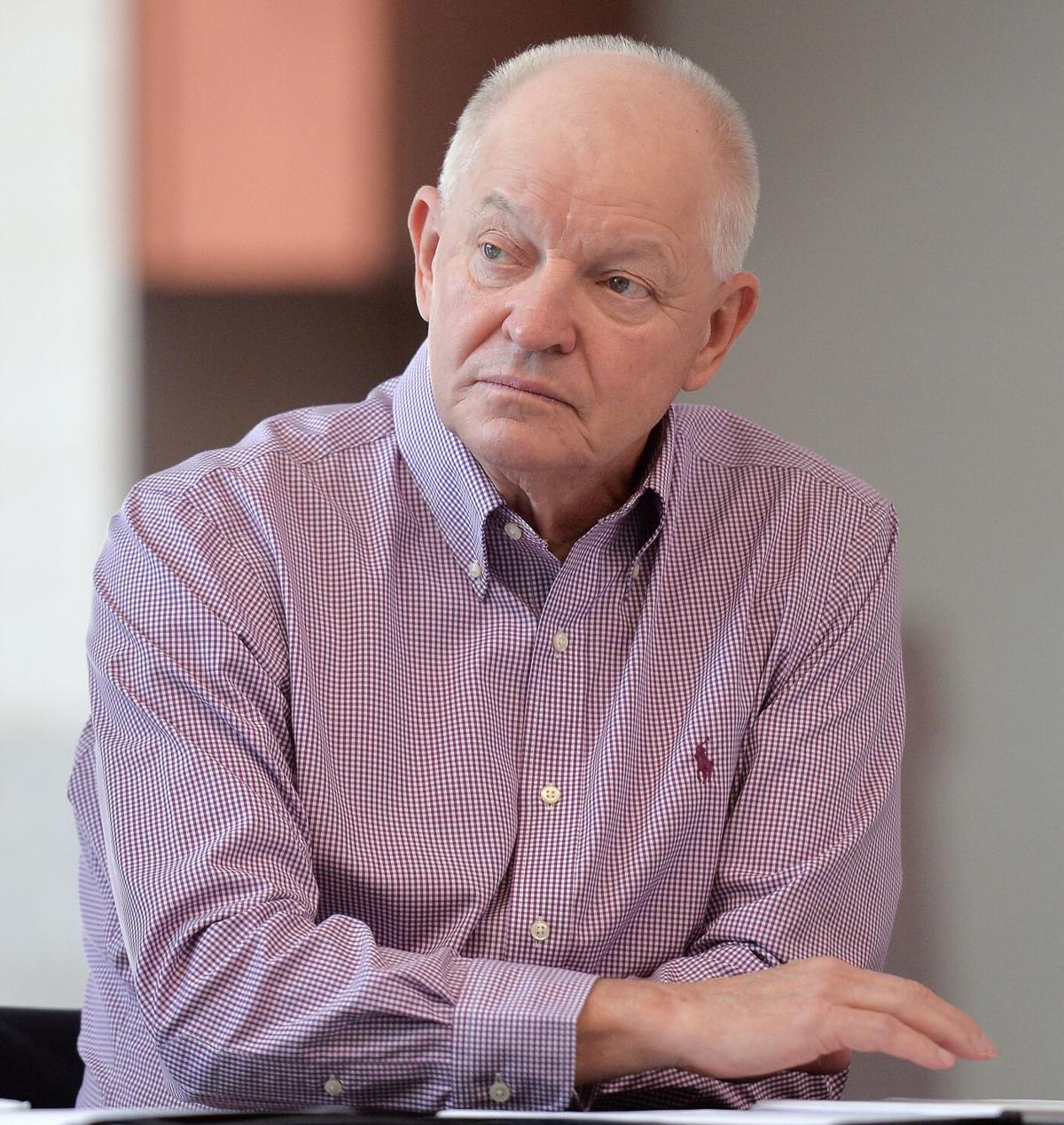 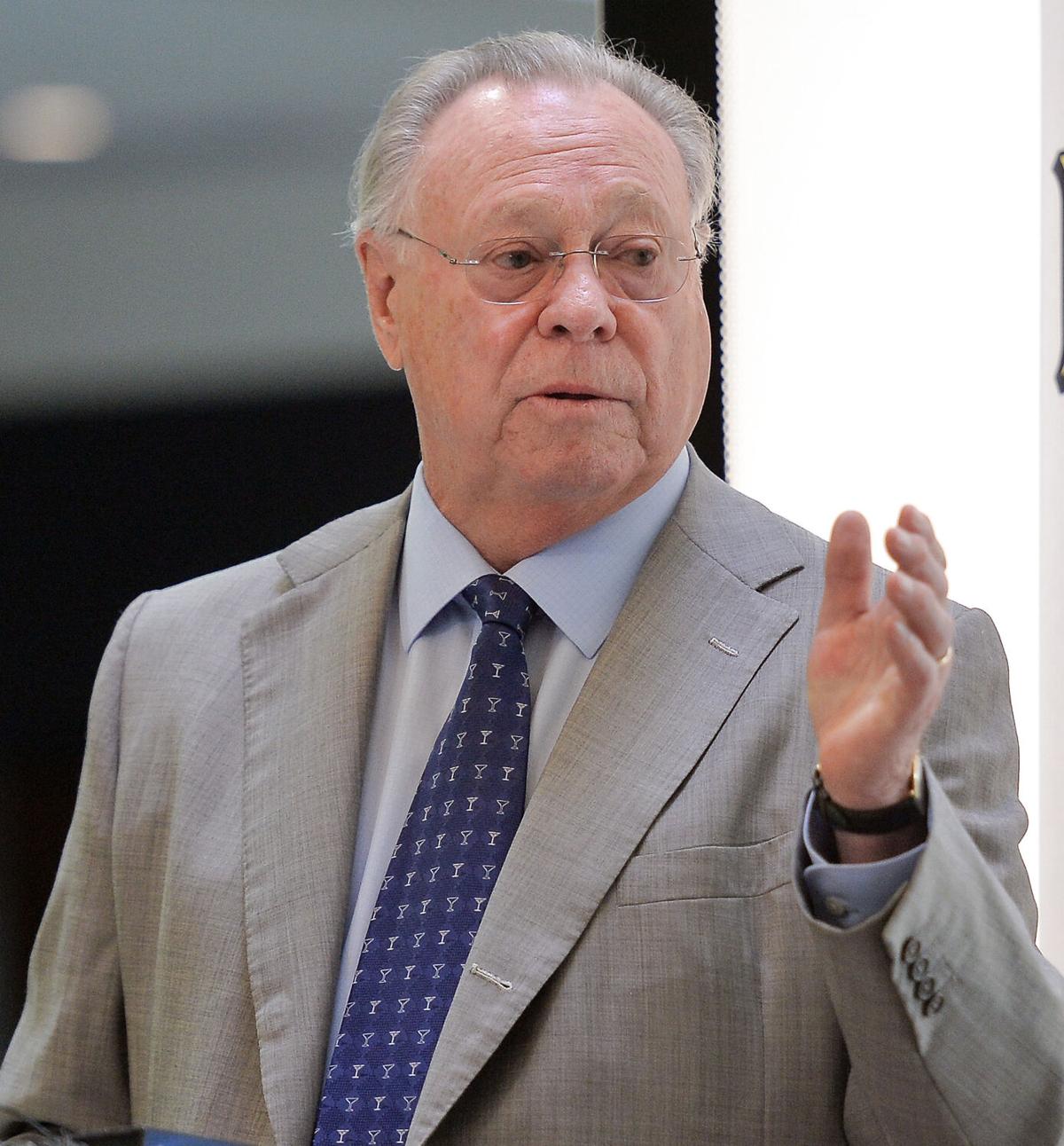