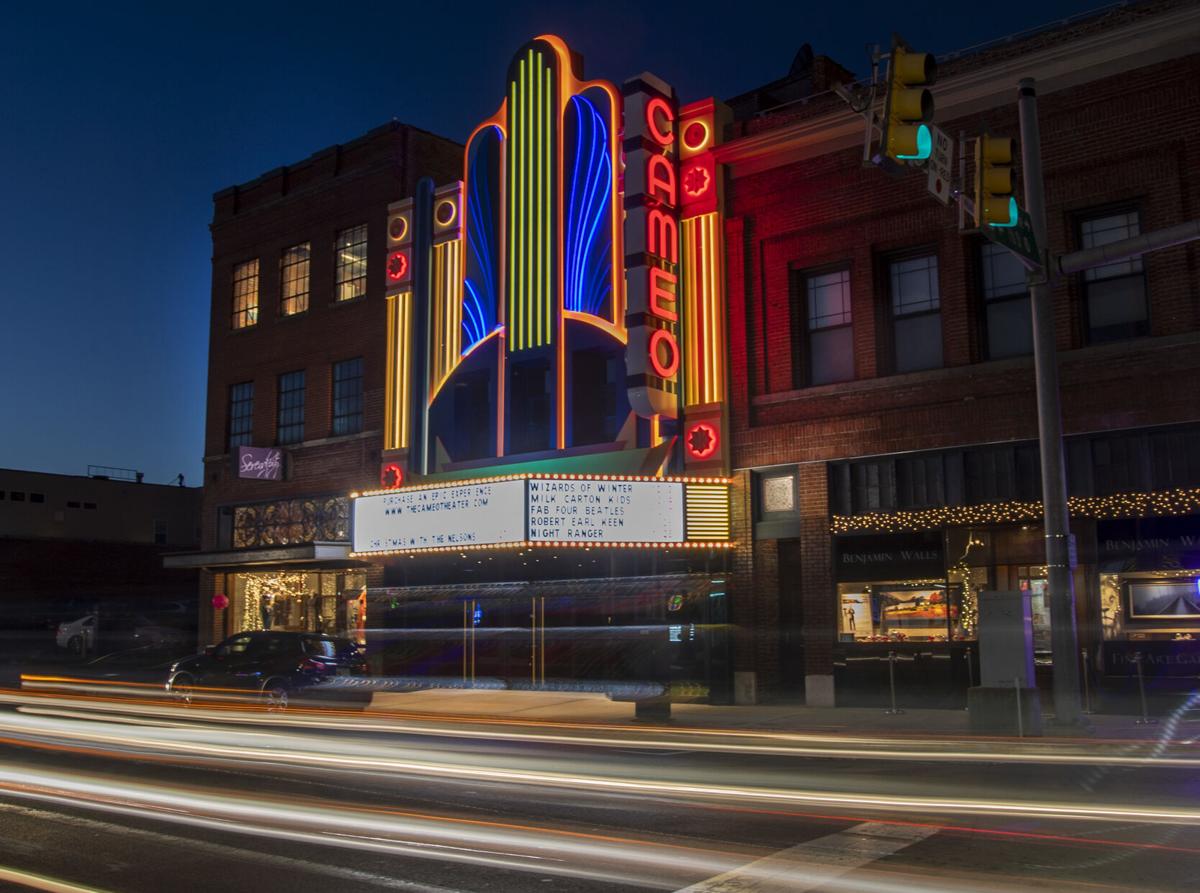 The lights of The Cameo Theater shine bright over State Street as cars drive Friday. The theater reopened Sept. 3 after being renovated. 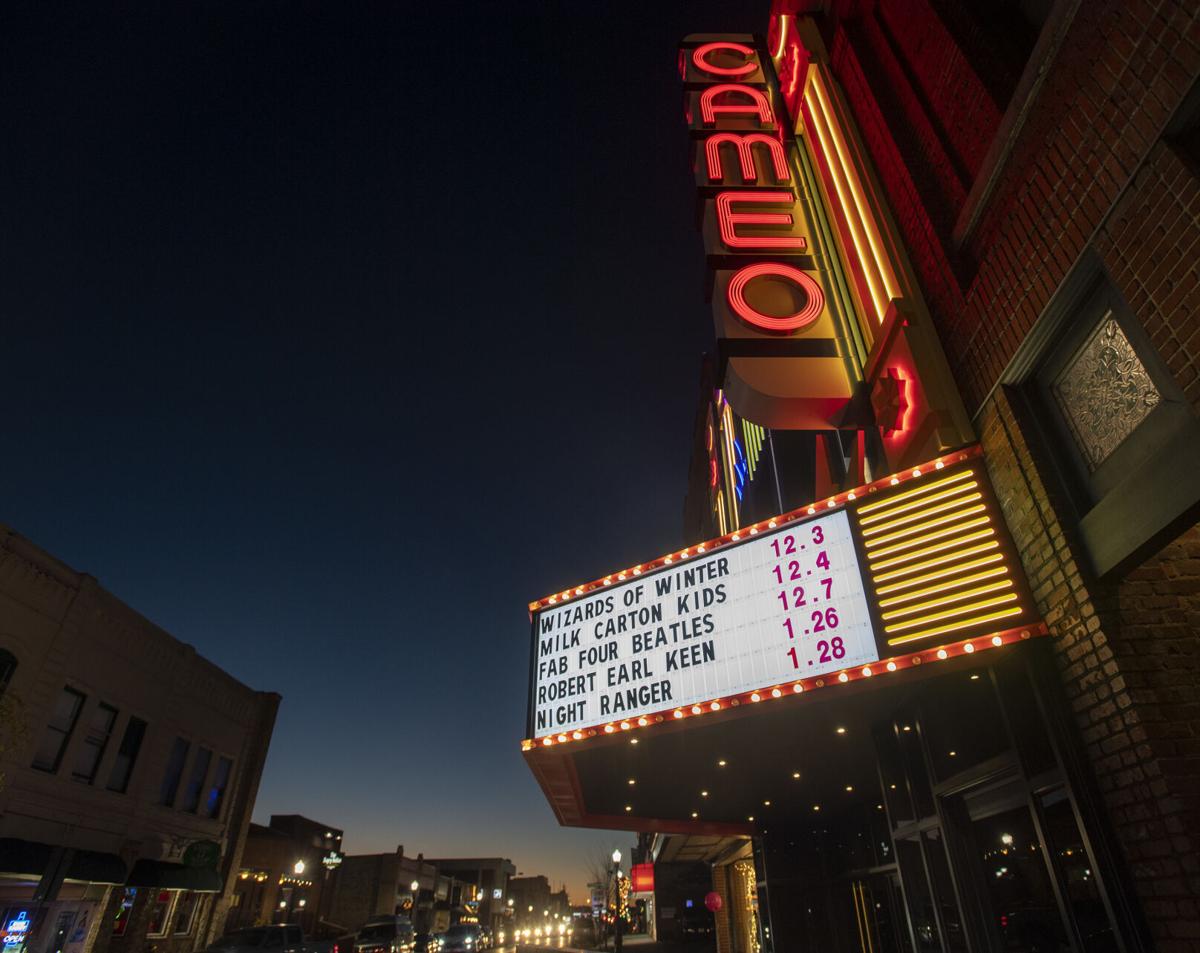 The lights of the Cameo shine bright over State Street 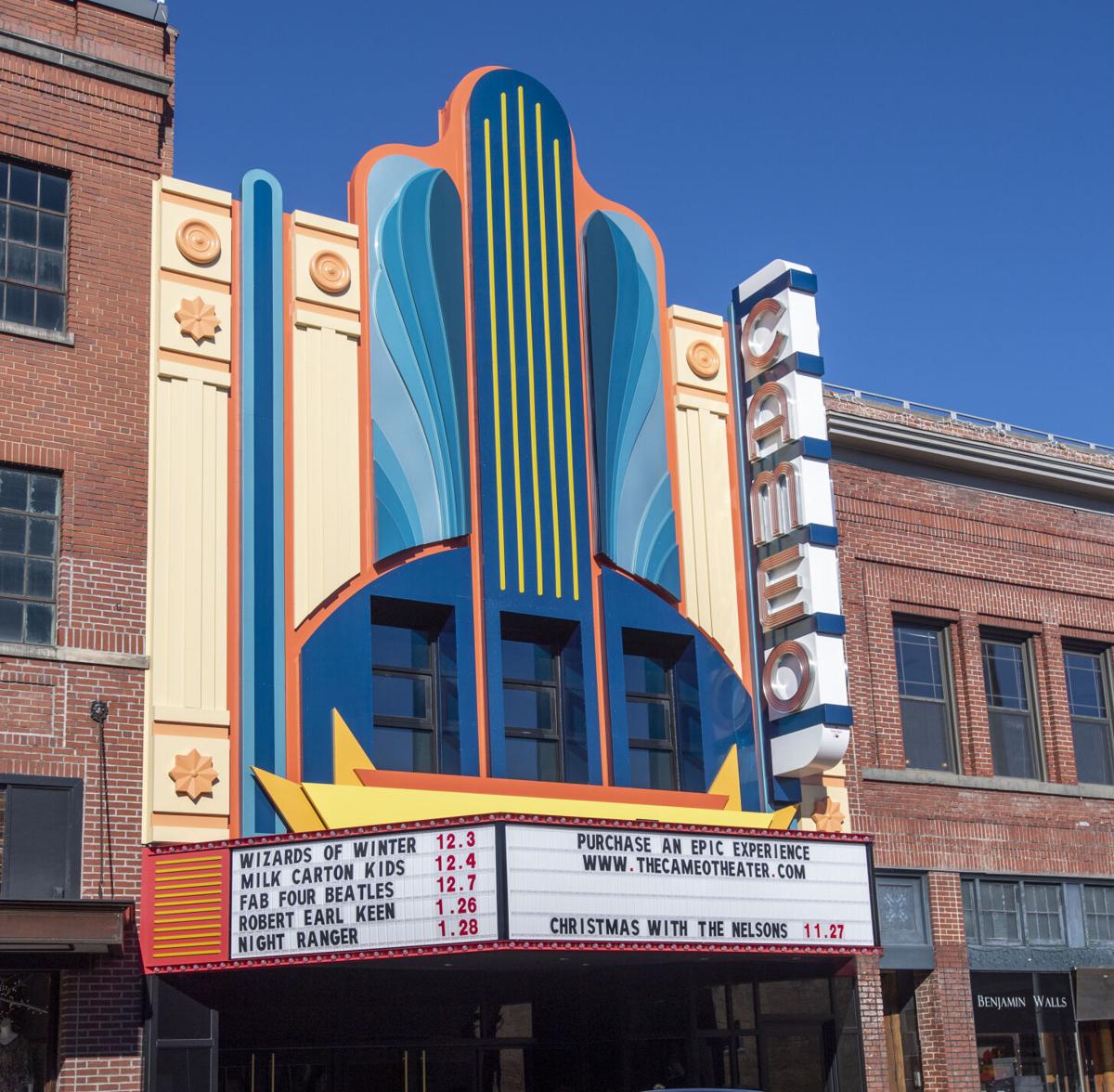 The Cameo opened earlier this year and has had multiple shows at the restored theater. 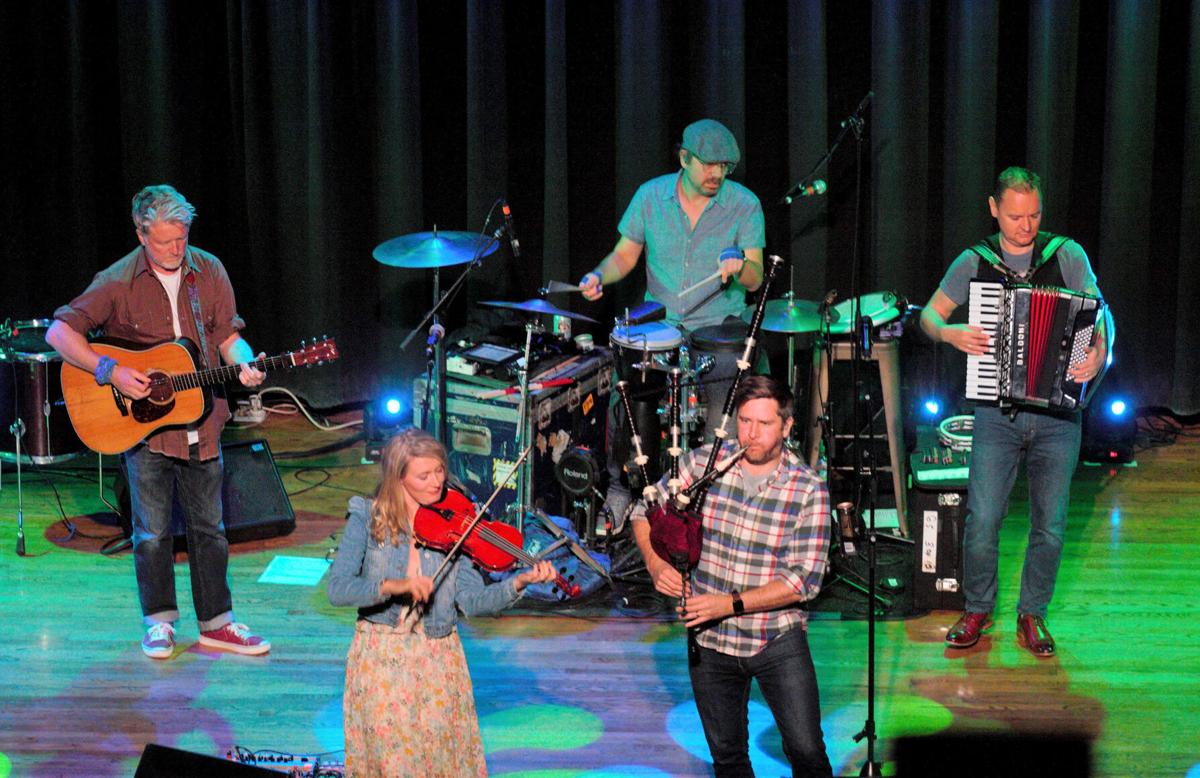 Celtic rockers Gaelic Storm returned to Bristol on Friday, Nov. 5 for its nearly sold-out rollicking of The Cameo. 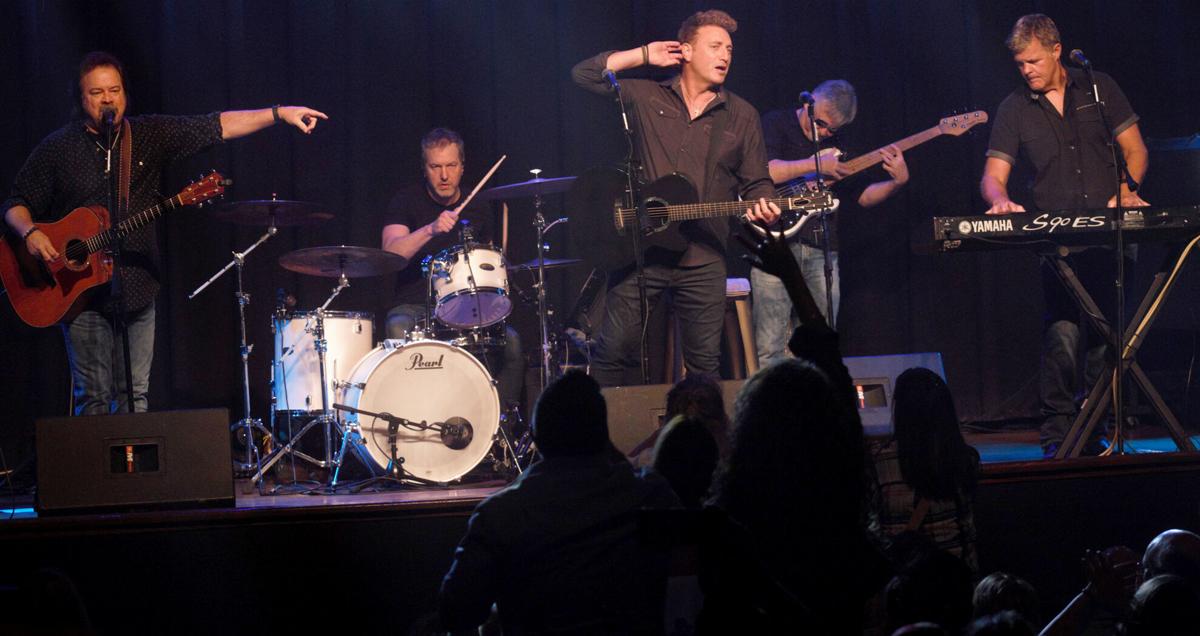 The Frontmen of Country entertained a near-capacity crowd at The Cameo Theater on Saturday, Oct. 2.

Before and after the rock band’s lead singer performed to a sold-out audience last month at The Cameo Theater, his praise for the newly-renovated and reopened theater flowed in effusive fashion.

“It feels like everyone is one unit here,” Roland said. “I love it here.”

Weeks later, Brent Buchanan sat near the stage. Smile as broad as a brahman bull, he spread wide his arms, looked afar, and marveled at the marvel that is The Cameo Theater.

» What: The Cameo Theater

“I knew The Cameo was special. Working on it for three years with my dad, I knew it was special,” said Buchanan, owner of The Cameo Theater, which officially reopened on Friday, Sept. 3. Rock veterans Blue Oyster Cult headlined a sold-out performance that night.

Jon Houser sat on the second row with his wife. The Bristol resident and native grew up attending such Disney movies as “The Island at the Top of the World” at The Cameo.

“I remember going upstairs to buy gum out of a machine for 15 cents,” Houser said. “I saw Cheech & Chong’s ‘Next Dreams’ at The Cameo in the balcony when I was a senior in high school.”

A fan of Blue Oyster Cult since the mid-1970s, he found the band to be remarkable intact in terms of sound.

“It was excellent,” Houser said of the concert. “Blue Oyster Cult sounded like they did in the 1970s. There wasn’t really a light show. Just the music. There wasn’t anything to get in the way of the music. We loved it.”

Buchanan said he’s heard a steady flow of similar comments since the return of the classic Cameo.

“Now that the shows are coming, now that people are coming, I feel it’s far more special than I thought,” Buchanan, 44, said. “It’s a ‘Field of Dreams’ thing.”

For Hudson and his daughter, Emilie Hudson of Nashville, the Gaelic Storm concert served as a resumption of a father-daughter tradition that began when she was a child.

“We would travel around and see Gaelic Storm,” Tim Hudson said. “That was the thing we’ve done since she was in middle school.”

Now that she lives in Nashville, the Hudsons do not get to see Gaelic Storm nearly as often. However, when The Cameo announced the show, they pounced on a pair of tickets.

“It’s something my dad and I share together,” Emilie Hudson, 31, said. “This is nostalgic.”

Tim Hudson, a frequent concert-goer in downtown Bristol, marveled at The Cameo.

“Man,” he said grinning near the stage during intermission of Gaelic Storm’s concert, “this place is really something. Sounds great. Looks great.”

“Collective Soul, we only had 28 days to sell tickets, but it was extremely successful,” Buchanan said. “As a music fan, to go from the guy in college listening to Collective Soul to standing out back with Ed Roland, who was smoking a cigarette, was amazing.”

Buchanan turned in his seat, looked up at the stage, and shook his head to and fro.

“They’ll be back,” he said of Collective Soul.

Buchanan would not divulge, but he said that he’s currently working on nearly 30 shows that may appear in The Cameo. Confirmed shows include Clarksdale, Mississippi blues guitar maestro Christone “Kingfish” Ingram, who will appear at The Cameo on Thursday, Jan. 13. Arena rockers Night Ranger will make their Cameo debut Friday, Jan. 28.

Around the corner, Ricky Nelson’s sons Matthew and Gunnar bring their Christmas with The Nelsons show to The Cameo on Saturday, Nov. 27. A rock theme trend continues on Friday, Dec. 3 with The Wizards of Winter, who blend Christmas with classical and heavy metal rock.

“I’m trying to change people’s perception that, ‘I can only listen to country music in Bristol,’” Buchanan said. “Step out of your comfort zone. I want people to expand their horizons of music.”

To that point, The Gin Blossoms, whose pop-rock hits from the 1990s included “Hey Jealousy” and “Follow You Down,” will revive those hits and more at The Cameo on Tuesday, Feb. 22. Tickets go on sale Saturday, Nov. 20.

“I love rock,” Buchanan said. “When Blue Oyster Cult played here, I think we were built for ‘Godzilla.’ We’re gonna rock this place.”

Stride along State Street, step under its dazzling marquee, and pass through the front doors. It’s small lobby gleams brand new. Likewise pristine wooden steps that lead to the balcony, carpet that lines the aisles down below, and comfy seats in which people sit.

“My dad says that The Cameo wasn’t this nice in 1925,” Buchanan said. “I think the future of The Cameo is bright. The Cameo had, basically a 40-year darkness. It turned 97 this year. My goal is that in 97 years, The Cameo will still be here.”

But like Freddie Mercury and Queen circa 1977, The Cameo will rock you.

“You won’t always get a fastball. Sometimes you’ll get a curveball,” Buchanan said. “But we will rock you.”

The lights of The Cameo Theater shine bright over State Street as cars drive Friday. The theater reopened Sept. 3 after being renovated.

The lights of the Cameo shine bright over State Street

The Cameo opened earlier this year and has had multiple shows at the restored theater.

Celtic rockers Gaelic Storm returned to Bristol on Friday, Nov. 5 for its nearly sold-out rollicking of The Cameo.

The Frontmen of Country entertained a near-capacity crowd at The Cameo Theater on Saturday, Oct. 2.