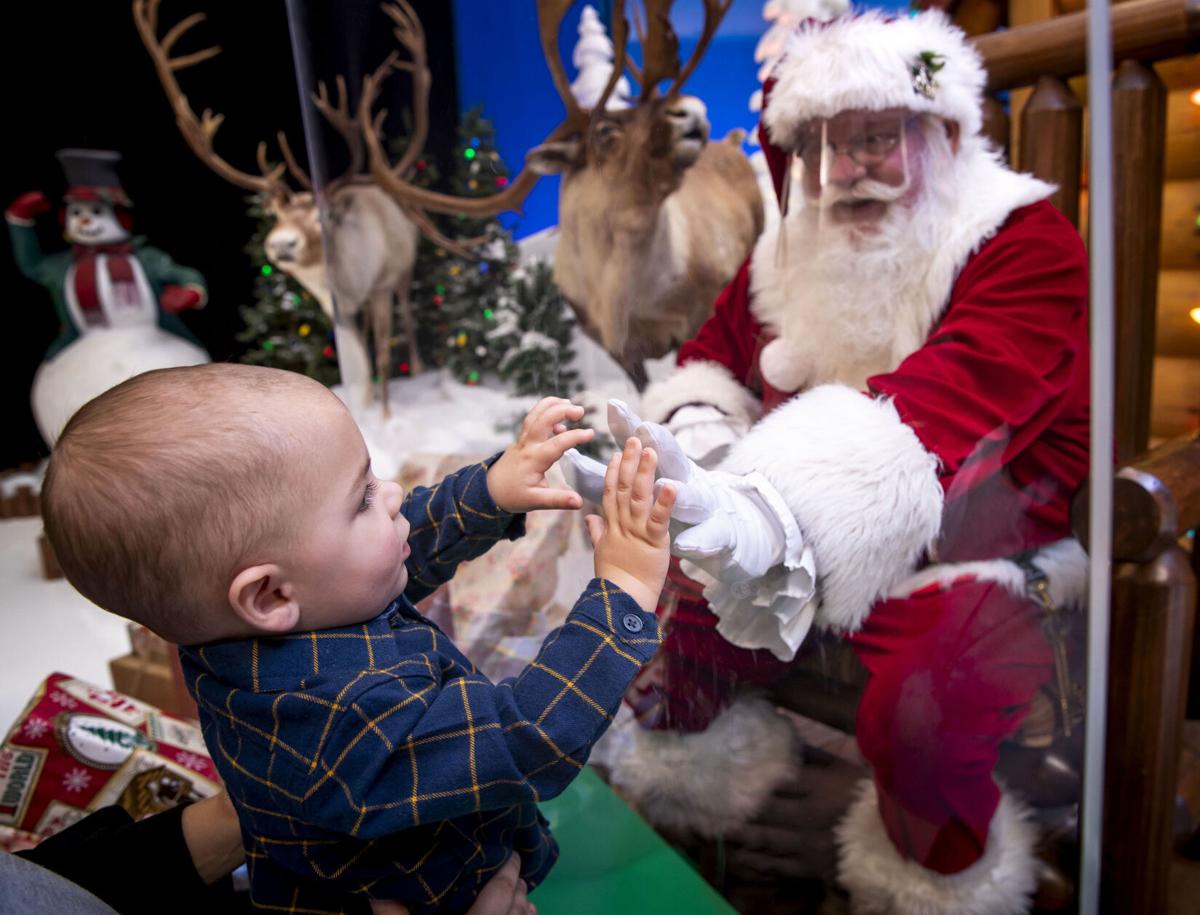 Bass Pro Shops has continued their Santa’s Wonderland with special safety precautions because of the COVID-19 pandemic. 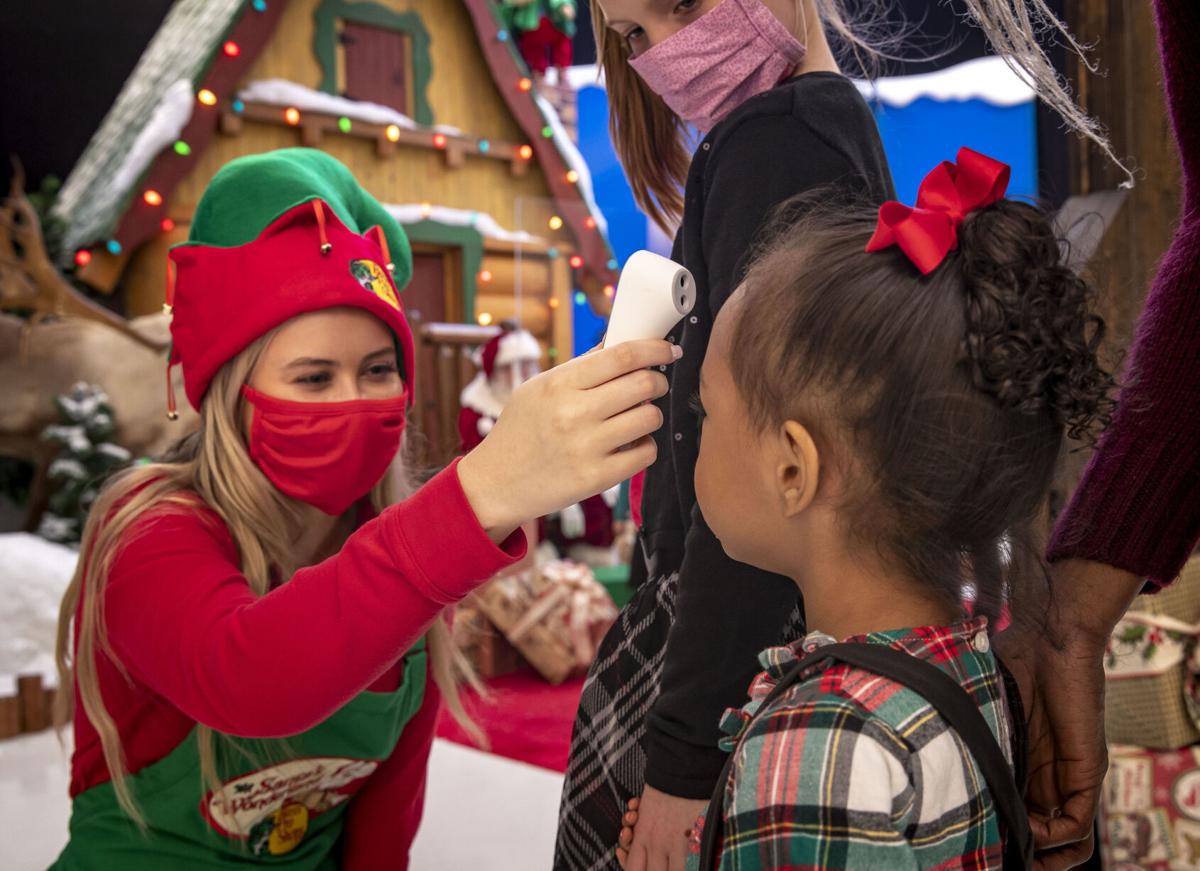 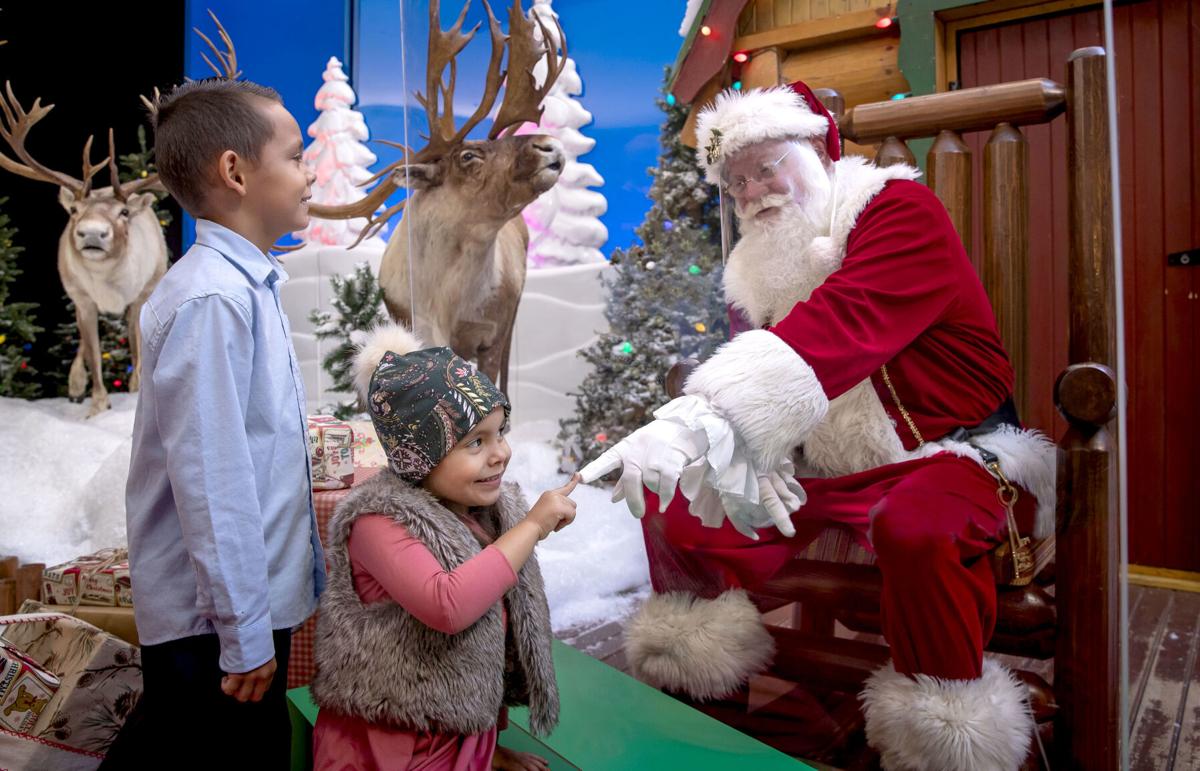 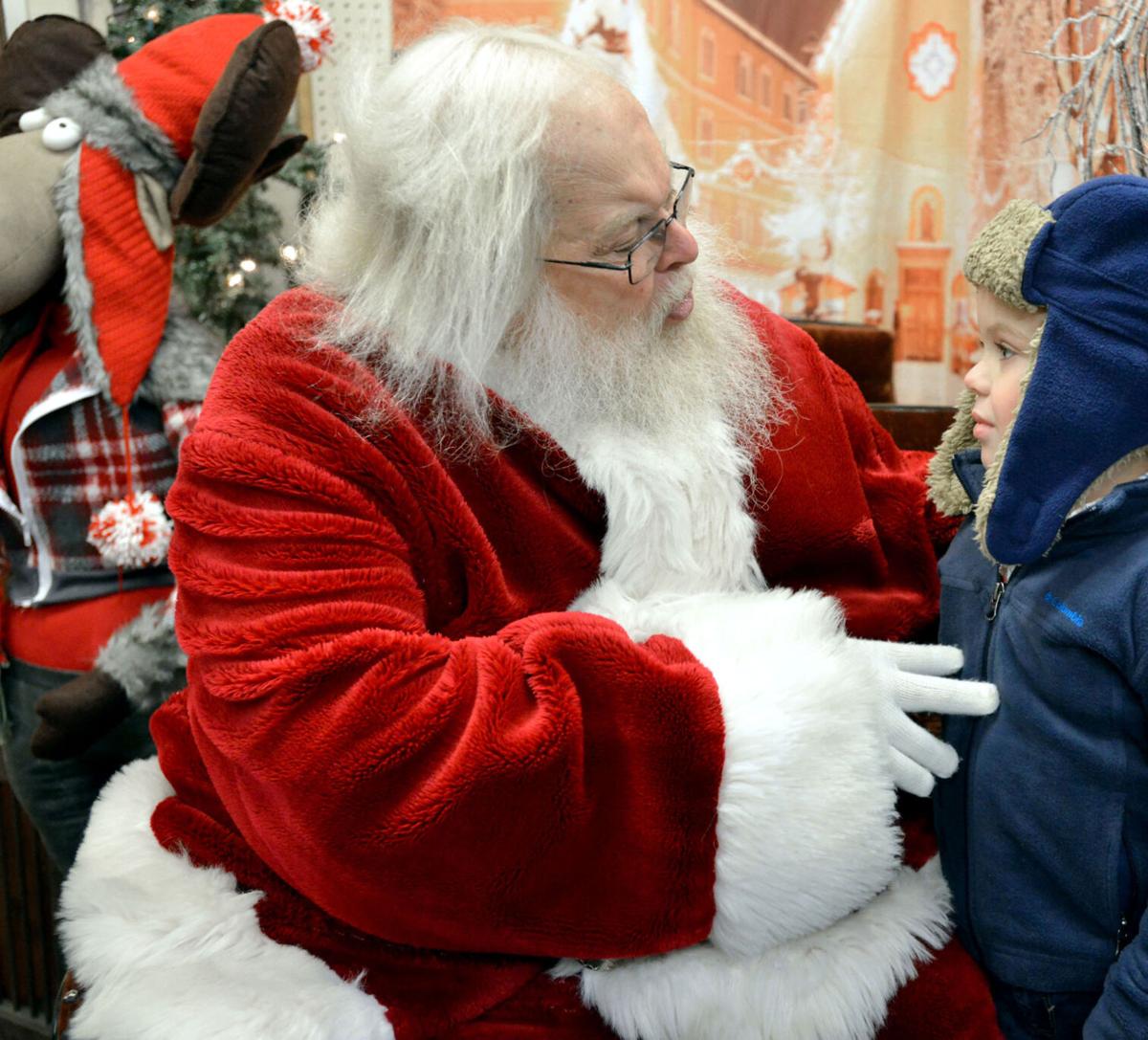 Santa talks with a young boy during the annual Christmas Open House sponsored by Believe in Bristol in 2018. Due to the ongoing pandemic, a formal downtown open house is not scheduled this season.

You can visit Santa Claus at Bass Pro Shops at The Pinnacle in Bristol, Tennessee — just like last year.

But not in the same way. First, you must make an appointment. Wear a mask. Have your temperature taken. And don’t be disappointed by the plexiglass.

Like everything else this year, Santa’s visits with children have been altered by the COVID-19 pandemic. There is still some access to Santa, but most of it is virtual or from a distance.

Take, for example, how Santa Claus has come to the town inside Bass Pro Shops.

You can find Santa Claus at the store each day, starting at 10 a.m.

“We have long days so we can take care of a lot of guests,” Hall said. “The guests register online.”

Santa arrived Nov. 7 and will remain at the store through Christmas Eve.

And despite the precautions, Santa is popular with visitors who range from newborns to senior citizens, Hall said.

But stand back with social distancing from where Santa sits on a chair at a cabin.

Claus and his visitors are separated by glare-proof plexiglass that has worked “extremely well,” Hall said.

Even so, some children do reach out emotionally, trying to touch Santa, sitting behind the plexiglass and wearing a face shield. That’s about as close as you can get to a childhood wonder these days in the midst of a killer virus at Christmastime.

By now, it’s the height of the holiday season. Yet “Santa Bill” McKee is still at his “North Pole.”

Coronavirus has sidelined this Santa for the 2020 season.

“The main concern for Santa has to be for this pandemic — not to pass it on to children who might pass it on to their grandparents, who can die from it,” McKee said. “And that has to be a concern this year.”

At 70, after portraying Santa Claus for 20 years, McKee has simply gone virtual — for safety’s sake — in the wake of the worldwide COVID-19 pandemic.

“I’m not doing anything in person,” McKee said.

It’s quite a switch from last year, when McKee rode a sleigh as Santa Claus during the Bristol Christmas Parade and portrayed Santa at Bristol Motor Speedway’s “Speedway in Lights.”

In a normal year, McKee makes 100 appearances as the jolly old elf — including about 80 in November and December.

That can mean stops at schools, nursing homes and hospitals.

Becoming Santa is special “just in knowing that sometimes all it takes is a word or a smile or just a gesture or a small gift that can make someone’s day.”

At home in Glade Spring, McKee keeps toys in a room that he uses as gifts. That’s mostly cars and trucks for boys and stuffed animals for girls. But not this year. What’s in stock is staying put — until a coronavirus vaccine can make the world safe again for Santa, he said.

“I have not given anything away this year,” McKee said. “I’m not out there in the public.”

But Jerry Rector is, dressed as Santa Claus and making appearances at private functions as well as corporate events.

Also age 70, Rector has portrayed Santa Claus for 29 years, mostly near his home in Bristol, Virginia.

This year, that has included stopping to see home-schoolers as well as setting up photo opportunities with Santa Claus at a barn along U.S. Highway 421 in Sullivan County, Tennessee.

This week, Rector counted having completed 41 visits — with 39 more to go before Christmas, he said.

“What makes me want to do this? I think if God gives you a talent, you should use it,” Rector said. “As long as I’m witnessing for Christ, that is the true meaning of Christmas.”

On the road, Rector wears a mask. But, at a social distance, he will slip off that mask when it’s time to snap a picture with Santa, he said.

Married to an LPN for 39 years, Rector says he’s also mindful of the health of Santa Claus during the pandemic.

For one, he has his temperature taken frequently.

He also makes it a point to sanitize his Santa outfits.

McKee, on the other hand, points out how Santa Claus could be a health hazard.

“One of the things that I’ve had to educate people on a bit is how Santa, all by himself, could easily be a super-spreader of this virus …,” McKee said. “It would be so easy for Santa to go and visit a family. But one person has the virus — and they’re not sick — and they pass it on to Santa.”

Never one to give up the Claus cause, McKee still seeks to spread Christmas cheer — and not the coronavirus — by sharing St. Nick in the virtual world with Facetime and Zoom meetings.

Among these is a Zoom “Storytime with Santa” with the Washington County Public Library on Dec. 19 at 2 p.m. in Abingdon.

“I will be here in the workshop,” said McKee, who regularly refers to his home in Glade Spring as the “North Pole.

McKee has also incorporated a call-in show on WEHC-FM on the campus of Emory & Henry College at Emory, Virginia.

“I will be live at the station all three days,” McKee said. “And I will also be taking calls for an hour each day.”

“The majority of Santa’s helpers are in the light-risk or high-risk category,” he said. “There are some of these guys out there, it would kill them in a heartbeat.”

Even with all of his precautions, Rector knows he’s risking his health portraying Santa this year.

But he’s doing it anyway “because I feel like there’s so much going on nowadays,” he said. “I leave everything up to God in my life and I feel like these kids need something to look forward to. ... We’re just not making personal contact.”

Until the coronavirus is contained by a vaccine, McKee predicts Santa’s sleigh will remain docked and his reindeer grounded.

“It depends on how quickly and how well we can get this pandemic under control,” McKee said. “It will be late spring, early summer to mid-summer before they get the vaccine to the average person.”

Bass Pro Shops has continued their Santa’s Wonderland with special safety precautions because of the COVID-19 pandemic. 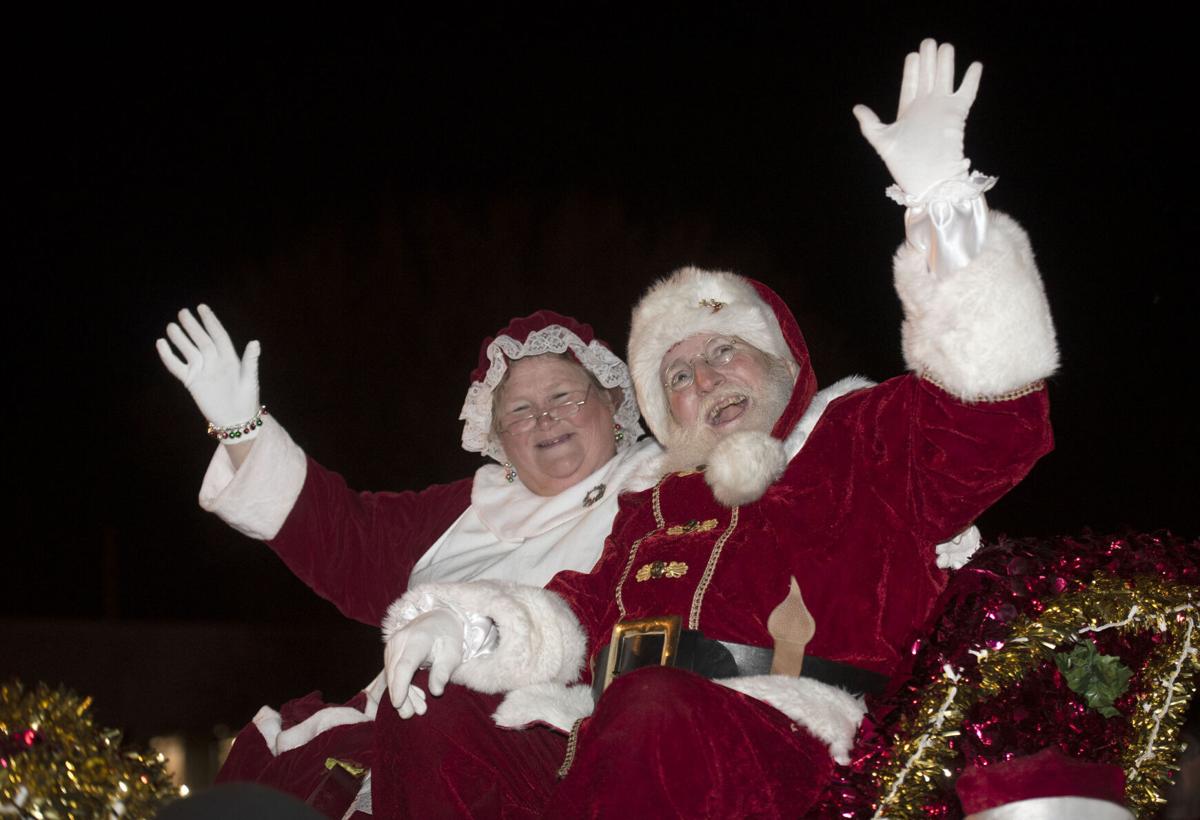 Santa and Mrs. Claus wave from their sleigh during the 2019 Bristol Christmas parade. Due to the ongoing pandemic, the parade has been canceled this year. 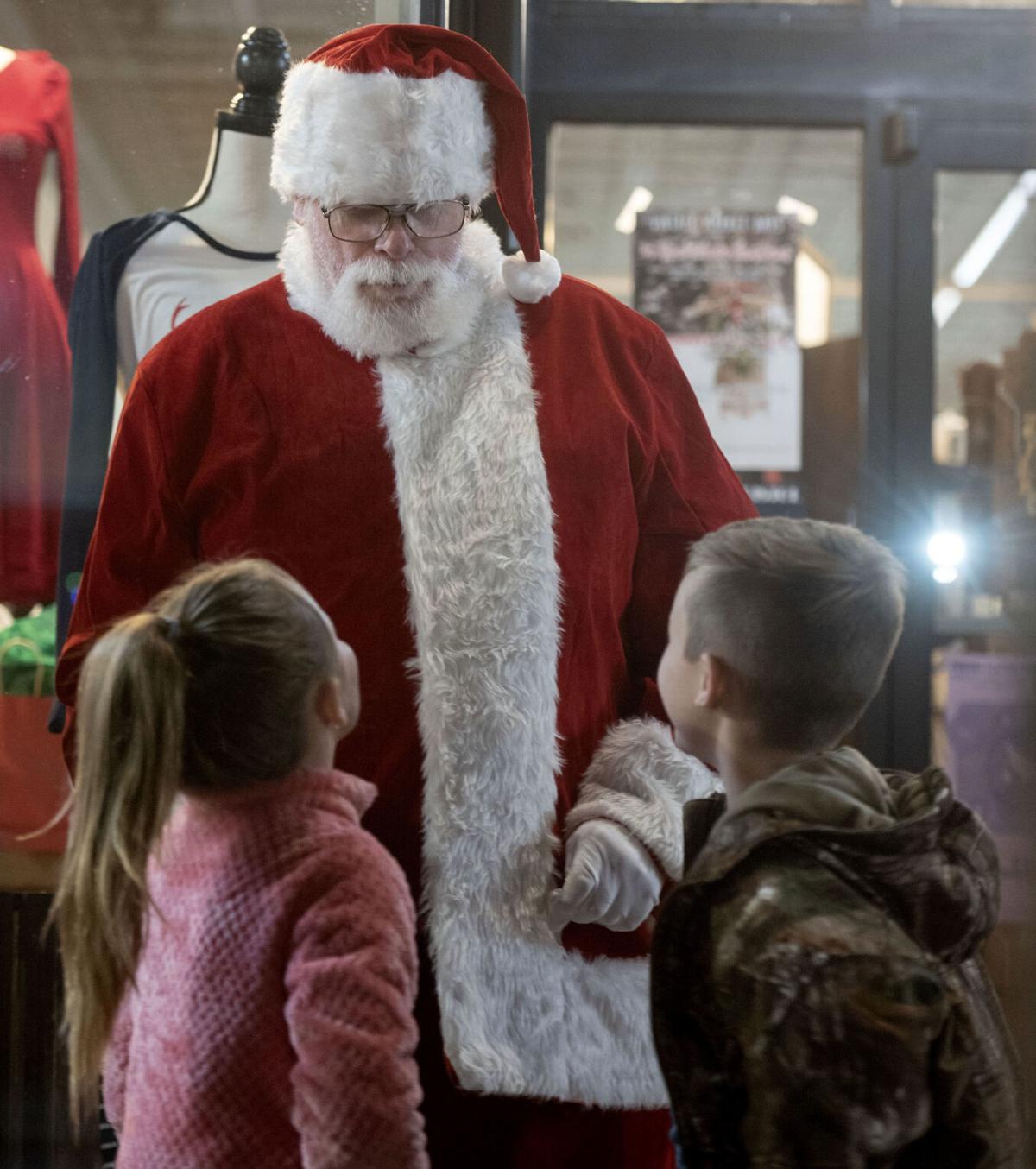 Santa Claus talks with two young children during the annual Christmas Open House in downtown in 2019. Due to the ongoing pandemic, a formal downtown open house is not being held this year

Santa talks with a young boy during the annual Christmas Open House sponsored by Believe in Bristol in 2018. Due to the ongoing pandemic, a formal downtown open house is not scheduled this season.