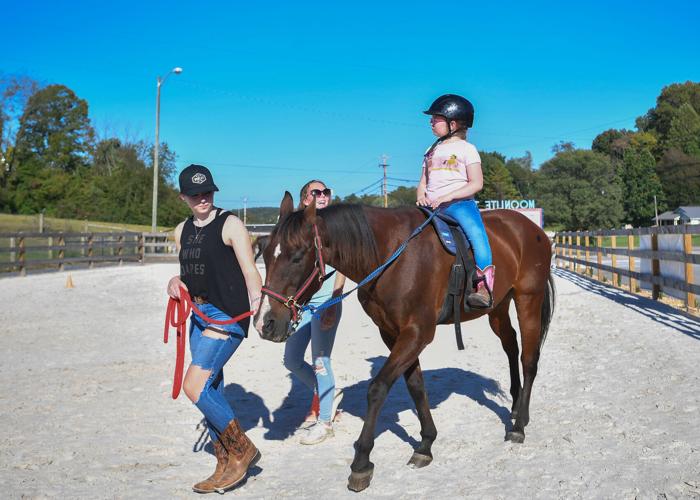 Rider Elsie Milam keeps her focus as she makes laps around the riding arena on Colonel, with Bella Clark (front) and Ella Jackson (back) walking beside her during her session. 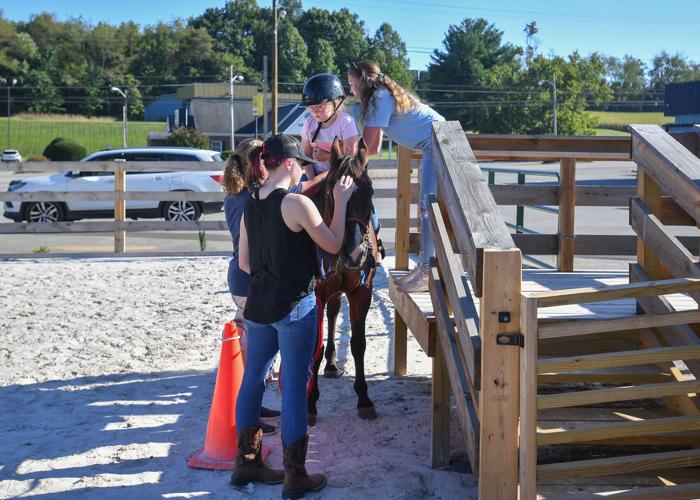 Ella Jackson (right) helps Elsie Milam (middle) get situated on Colonel with the help of Bella Clark (front) and Tish Jackson (left) before her session. 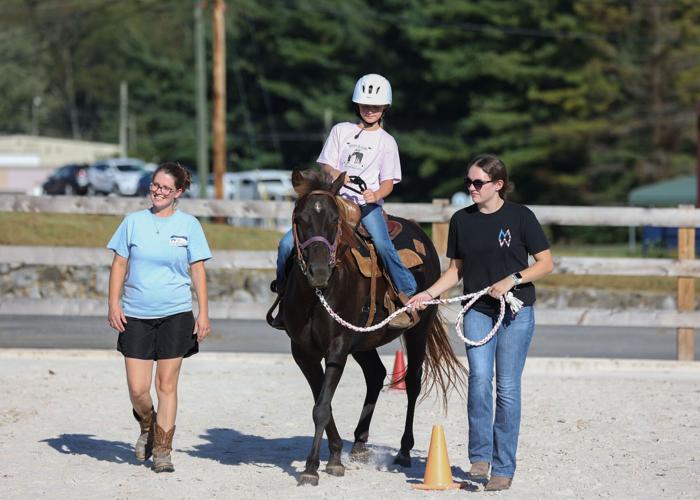 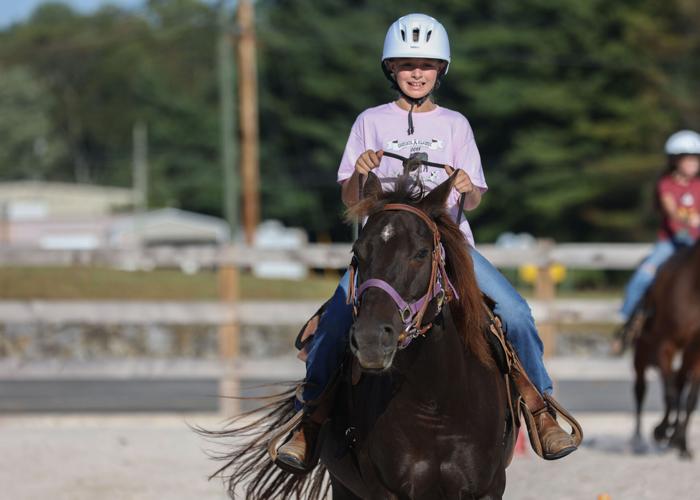 Gracie Hunt guides Ani, an 8-year-old mare, by herself down the riding ring during her session at The Barns at Blue Mountain Wednesday. 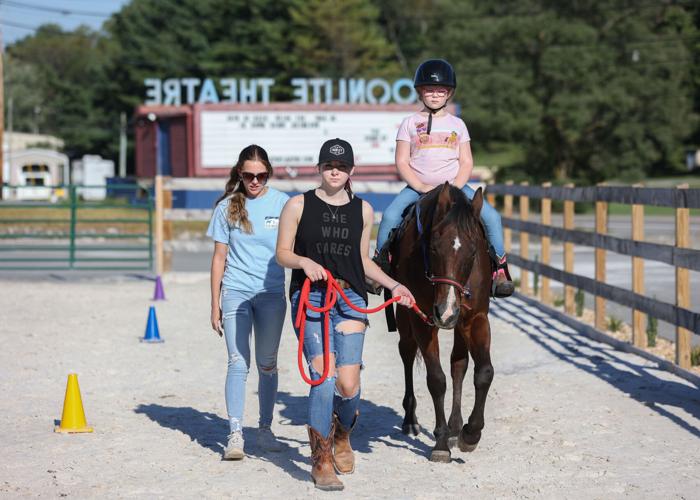 Rider Elsie Milam keeps her focus as she makes laps around the riding arena on Colonel with Bella Clark (front) and Ella Jackson (back) walking beside her during her session.

“The motion when you’re sitting on a horse when the horse walks, the motion that’s your legs get and move is the same as if you were walking yourself. So, it’s therapeutic, and the fact that you can get that motion without the pressure and the weight on your joints,” Jackson said. “The other reason is, horses are mirror images of yourself, so, you know, a kid with some trauma in their life, some issues at home, anxiety or depression. The horse can sense that, and they show it back to you, so you can kind of see how you are acting. It’s about building that relationship and having that trust, that bond.”

Jackson pointed out that BMT is always looking for new therapies to connect with and better help their patients and that they had been toying with the idea of equine therapy since A Leg Up, a non-profit that used to offer the service, closed 20 years ago.

“Being in the therapy business that Blue Mountain Therapy is in, you know, we’re always experimenting and looking for ways that we can help, those alternative therapies that we can use to help those that maybe traditional therapies aren’t getting them as far as what we would hope,” Jackson said. “Ever since A Leg Up closed down, it’s kind of been in the back of our minds to want to offer this service.”

Currently, BMT offers two separate equine therapy programs with different goals. The first is the therapeutic riding program which is focused on having the horses work with kids who have physical disabilities or cognitive delays, as well as emotional or mental disabilities. The second program, which Jackson highlighted, is their at-risk youth program, which is primarily composed of kids referred to them by foster services or the Department of Social Services.

“One of our programs we’re really wanting to, as far as therapeutic riding, we’re wanting to excel their physical and mental well-being, whereas the at-risk teen program, we’re really wanting to create a better life path for that group,” Jackson said. “We just want to provide, first of all, a safe and nurturing environment for them. But, we want to teach them life skills and how to build relationships, good relationships, and how to stick to those and trust in those and then life skills. We want to learn responsibilities, respect, you know, setting goals, and achieving those goals. So, that’s kind of our end game.”

The length of the equine therapy programs at the Brans at Blue Mountain depends on the patient’s needs, with some completing a six-week program and others having more regularly scheduled sessions that can cross over with the therapy they receive at the BMT clinic or any other therapy they are receiving.

“We will just talk it through with the parents and see kind of what their goals are and what that child needs,” Jackson said. “If they are already in any therapy programs, we do coordinate with other therapists.”

Jackson encourages parents or guardians who are hesitant about letting their kids near a horse to come visit and observe. She described the process through which they acquaint the kids with the horses.

“We start by just getting them acquainted with maybe the pony, a smaller horse. We do a lot of groundwork, so we let them touch, brush and lead first, and then we ease them on,” Jackson said. “We have a leader with them until they get comfortable enough to where they can do it on their own.”

BMT currently has 15 kids, and two adults signed up for equine therapy sessions, as well as eight horses and two ponies. Jackson believes that not only do the kids have their lives changed, but so do the horses, especially Colonel, who, at 30 years old, has been reinvigorated since arriving at BMT.

“It’s pretty easy to see that these horses love their job, and this older horse (Colonel) here. When he came in, we really didn’t know if we would be able to use him. He was a little skinnier, and he was not as peppy as he is today,” Jackson said. “I knew I would see lives changed for the kids, but that horses life changed too because he kind of got a second chance at life, to serve again. And he enjoys it, and he struts around in the field like he is just the ‘It horse,’ which he is around here.”

Blue Mountain Therapy will have an official ribbon cutting for their new Barns at Blue Mountain on Thursday at 11 a.m. at 17507 Lee Highway in Abingdon, Virginia.

As Hurricane Ian makes its way toward Florida, residents of Southwest Virginia and Northeast Tennessee should fish out their raincoats, dust o…

Two local educators are playing a role in determining what books will be sent to the homes of first through third graders in Tennessee next summer.

Music in the Castle plans to march on Saturday

The 70th annual Music in the Castle marching band festival is still on for Saturday at Tennessee High School.

Work taking place in Marion and the Mount Rogers region is opening doors for other mental health clinics across the commonwealth.

Just try to imagine a child, who is scared and fearful, has been removed from their home because of the abuse and neglect they have often had …

Rider Elsie Milam keeps her focus as she makes laps around the riding arena on Colonel, with Bella Clark (front) and Ella Jackson (back) walking beside her during her session.

Ella Jackson (right) helps Elsie Milam (middle) get situated on Colonel with the help of Bella Clark (front) and Tish Jackson (left) before her session.

Gracie Hunt guides Ani, an 8-year-old mare, by herself down the riding ring during her session at The Barns at Blue Mountain Wednesday.

Rider Elsie Milam keeps her focus as she makes laps around the riding arena on Colonel with Bella Clark (front) and Ella Jackson (back) walking beside her during her session.