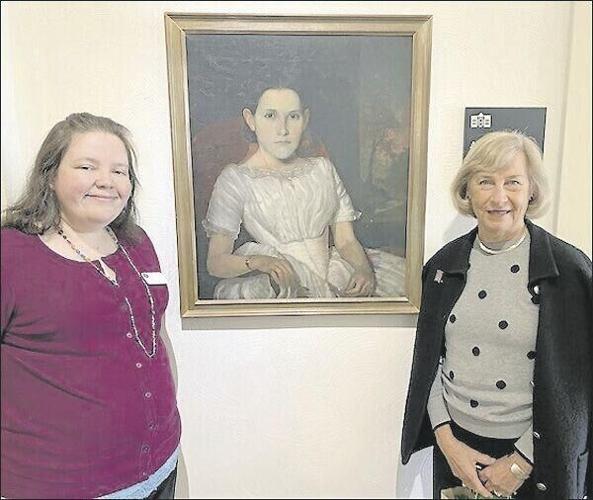 Rebecca Guest, membership and development manager of the Virginia Association of Museums, and Betsy White, WKMA director, stand beside the portrait of Anna Chastain. 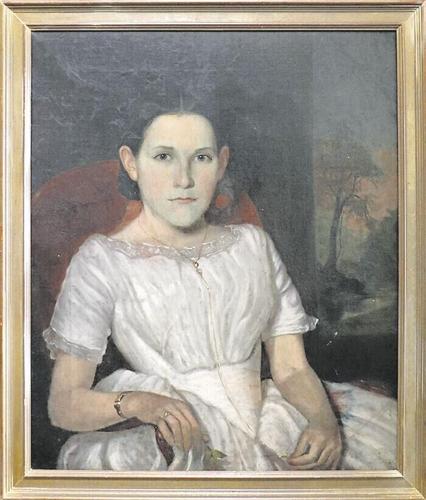 Samuel Shaver is believed to have painted this portrait of Anna Chastain between 1845 and 1850. 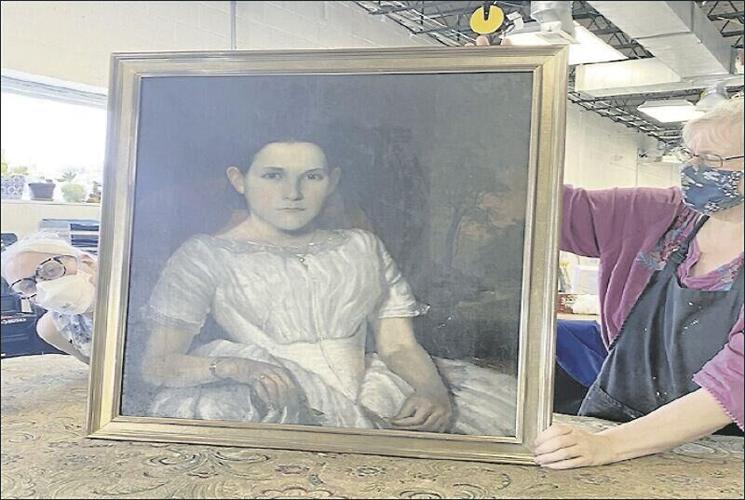 Betsy White, WKMA director, at the Richmond Conservation Studio, where the Anna Chastain portrait has been delivered for conservation.

The Smyth County native died in 1904 in Kentucky. However, her image as a young girl continues to live on and is getting extra care now thanks to conservators in Richmond.

Anna Chastain was born in the Saltville area and lived in the county until she was about 8 years old when her family moved to Kentucky.

While the details are limited, Betsy White, William King Museum of Art director, knows that she returned to Abingdon for her education, likely at one of the community’s private schools. During that time, the prolific portrait artist Samuel Shaver painted Chastain.

Experts who have evaluated the painting believe the girl was 10 to 12 years old when the painting was done, likely between 1845 and 1850.

Samuel Shaver was the nephew of Michael Shaver, who served on Abingdon’s town council and worked as a silversmith, jeweler, blacksmith, and even a dentist. White researched the Shavers for her book “Backcountry Makers: An Artisan History of Southwest Virginia & Northeast Tennessee.” In an article for A! Magazine for the Arts, White wrote, “Samuel was only 22 when he utilized this Abingdon connection to place an ad alongside one of his uncle’s in Abingdon’s Virginia Statesman newspaper announcing himself available as a ‘portrait and miniature painter.’”

She believes Chastain’s family must have had some measure of wealth to afford having her painting done and sending her away for school.

The museum has had Chastain’s portrait in its collection since 2002, but didn’t know it was a Shaver painting, White said. She noted that he rarely signed his work.

However, the museum was looking for a painting of a child to hang in the children’s bedroom of the Fields-Penn House, an 1860 Greek Revival style home on Abingdon’s Main Street that operated as a museum. There, White said, the painting hung over the mantelpiece and “everyone loved Anna.”

When the painting was moved to the main museum, White said, it was recognized as Samuel Shaver work. The museum had it evaluated by experts with the Tennessee Historical Society, who confirmed it was one of his paintings. Samuel Shaver did most of his work in Tennessee.

Now, the William King Museum of Art has received the 2021 Richmond Conservation Studio Grant for the conservation of the portrait.

White explained that the grant isn’t for a certain amount of money but whatever work is needed to preserve the painting.

Samuel Shaver’s later paintings, like this one, featured a background landscape.

After years of soot and dust are removed, White said, “Who knows what they’re going to find.”

At the museum, she said, they joke that Anna has been sent to the spa. “When she comes back,” White said, “it will be in all her glory.”

However, it could be up to a year before she returns. White said the Richmond Conservation Studio is much in demand and the work to restore a painting is painstaking.

When they do bring Anna home, White said, she’ll go into William King’s permanent collection gallery and the museum will likely hold a reception for her homecoming.

For the grant and this “very special piece of art,” White said, “We’re just delighted.”

While not a great deal is known about Chastain, White noted that she did marry and became the mother to five children. Anna Chastain Haynes died in 1904.

William King Museum of Art is open seven days a week with free admission. For information on exhibitions or events, visit williamkingmuseum.org or call 276-628-5005

William King Museum of Art is at 415 Academy Drive, off West Main Street or Russell Road, in Abingdon.

The University of Virginia’s College at Wise and Mountain Empire Community College) have partnered to help students bridge the gap from high school diplomas to college degrees in an effort to raise the educational attainment rate in Southwest Virginia.

When Madam Russell died in 1825, she was buried near Gen. Campbell. Today, the elements have taken their toll on her marker. Anna Leigh DeBord, the head of the Smyth County Historical Society, doesn’t want to replace the historic stone marker but add another.

Heavy rain and a threat of flash flooding is expected to continue through Monday in the Mountain Empire.

A program of the Virginia Community College System, Great Expectations helps students who have experienced foster care continue their education and transition to adulthood. A new $1 million grant from the General Assembly will expand it to every community college in the state.

Check residents have several concerns about FloydFest’s relocation in 2023, including an increased crime rate and its agricultural impact.

Rebecca Guest, membership and development manager of the Virginia Association of Museums, and Betsy White, WKMA director, stand beside the portrait of Anna Chastain.

Samuel Shaver is believed to have painted this portrait of Anna Chastain between 1845 and 1850.

Betsy White, WKMA director, at the Richmond Conservation Studio, where the Anna Chastain portrait has been delivered for conservation.