Step into the long, linear jail cell so overcrowded there is scant room to sit or sleep, save for a few unoccupied patches of concrete floor.

A 1980s-era, two-story lockup originally designed to house 200-plus inmates, the main Sullivan County jail typically holds more than 650. Cells designed for 16 people often contain as many as 50, who must share a single shower and two toilets. Bedding is at a premium. Many sleep on towels on the concrete floor; some snuggle up near the toilets.

Sardines may have more space.

In 2017 — with a daily average of about 730 prisoners — Sullivan County Criminal Court Judge Jim Goodwin warned a county committee the grossly overcrowded jail had achieved “critical mass” and should be addressed immediately.

Several months of investigation by the Bristol Herald Courier revealed:

» The Sullivan County Detention Center in Blountville is the most overcrowded jail in Tennessee, of facilities housing more than 350 prisoners, according to the Tennessee Department of Corrections. Its average monthly population has skyrocketed from about 730 in 2017 to about 1,000 in 2019.

» Sullivan County leaders currently have two options to address the jail’s long-term housing needs. Proposed by a Knoxville architectural firm, the plans would expand one or both current facilities at a cost of more than $80 million or build new for $110 million.

» The Bristol Virginia Jail is licensed by the state to hold 67 inmates but has an average daily population of 160. For years, the city has paid hundreds of thousands of dollars annually to house excess prisoners in other jails.

» Due to Bristol Virginia’s tenuous financial position, the city doesn’t have the borrowing capacity to construct or expand its existing jail facilities and — at current prisoner levels — it would cost more to house all its prisoners elsewhere and close its jail.

» Sheriffs in both jurisdictions estimate 75% to 80% of their inmates were arrested on drug or drug-related charges.

» Pretrial inmates — those who remain incarcerated but have not yet been convicted of a crime — account for a majority of the prisoners housed at the packed jails in Bristol, Virginia and Sullivan County, Tennessee.

» Due to few mental health services in the region, many people in a crisis end up incarcerated in local jails. Currently, about 15% of the jail population in Sullivan County is on mental health medications.

In the two years since those warnings, the numbers have only increased. On Aug. 31, 2019, Sullivan’s main jail held 746 prisoners, 196.8% of its rated capacity of 379 beds, Tennessee Corrections Institute records show. That 367-bed deficit made it the state’s most overcrowded jail for that month for facilities with more than 350 inmates.

Just up the hill, another nearly 300 prisoners were squeezed into the “extension,” a single-story cinderblock building constructed to house minimum security, non-violent day workers. Thanks to the ongoing overcrowding crisis, many current occupants have lengthy felony records. There are locked doors but no fence topped with razor wire encircling the structure, and a serene neighborhood lies just a few steps from the back door.

For the first eight months of 2019, Sullivan’s average monthly total head count was 976.

What do you think is the answer to local jail overcrowding?

Inmates are released every day — sometimes 25 or 30 — but just as many are typically booked in around the clock like a never-ending merry-go-round.

Inmates once nicknamed Sullivan’s bulging jail the “Thunder Dome,” after the post-apocalyptic movie “Mad Max Beyond Thunderdome,” with its cast of psychotic characters.

Hollywood comparisons aside, it is dangerous inside these walls.

With such overcrowding, jailers admit it is harder than ever to separate predator from prey.

There is also a commonly held public misconception that a majority of those inmates face marijuana possession, check kiting or other minor charges, Sheriff Jeff Cassidy said. In truth, the maximum security section includes a dozen men charged with murder. More than 66% of inmates are convicted of or charged with felonies including attempted murder, aggravated assault, rape, kidnapping, aggravated burglary and a litany of other violence.

Besides being desperately overcrowded, Sullivan’s jail is minimally staffed, and senior jail officials use words like “crisis” and “tragedy” in describing conditions and what could potentially occur there.

An average 12-hour shift is supposed to have 21 officers watching over roughly 1,000 inmates. Many times it’s 19, and all too often it’s only 17 — an average of one officer for nearly 60 prisoners. Overtime is standard procedure. Employees get called in to work constantly; staff burnout and turnover are epidemic, according to Chief Jail Administrator Lee Carswell.

Up to 10 prisoners at any given time may be segregated on suicide watch, and many others have significant medical needs. Two LPNs are assigned to each 12-hour shift.

Monday through Friday, six transportation officers shuttle prisoners to courthouses in Bristol, Kingsport and the adjacent county justice center. Many days, up to 80 must be driven the roughly hourlong round trip to Kingsport. Vans hold 16 prisoners and no more than two guards. Often, one guard makes the return trip to Blountville while the other remains in Kingsport to oversee those who will return later.

There are treks to prisons on the other side of the state, transports for mental health evaluations and trips to other states to pick up prisoners. Vehicle transmissions are rarely left in park.

Earlier this year, the sheriff begged the Sullivan County Commission to fund 32 more positions, including guards and medical personnel, to help relieve security and overtime concerns. The commission responded with funding for just 10.

Capt. Brian Dillard oversees day-to-day jail operations and calls it a miracle that one of his officers hasn’t been seriously injured or worse.

The Sullivan County jail’s operating budget for fiscal 2019-20 is $9 million, and the county has the capacity — if needed — to borrow the money to replace or expand the facility. Discussions are underway among elected county commissioners, but taxpayers are already on the hook for a $94 million building spree to construct new consolidated middle and high schools. Estimates show expanding could cost more than $80 million, and a new jail could cost $110 million.

Crisis on a smaller scale

Some 10 miles away in Bristol and 500 yards across the state line in Virginia, a smaller scale crisis plays out in the city-run Bristol Virginia jail.

Constructed in 1969-70 with a capacity of 67 inmates, its daily census has continually exceeded 150 for many years. Fitted with bunk beds, this two-story, 21,000-square-foot jail has a sleeping capacity of 134, meaning the remainder must sleep on the floor.

Bristol’s culture appears a bit calmer than Sullivan; there are fewer violent offenders, but it is still jail, and forcing 160 people to share a small space is far from ideal.

The plumbing is old — sometimes showers are scalding hot, other times cold. Water pipes leak; so do the toilets. Sixteen people are typically housed in pods designed for fewer than half that.

And the tiny, overcrowded jail can’t begin to hold all the city’s prisoners.

That means cash-strapped Bristol pays tens of thousands of dollars each month to keep more than 60 of its prisoners elsewhere — typically in Abingdon’s Southwest Virginia Regional Jail. During the past 12 months, taxpayers forked over an additional $600,000 to house, feed and care for the overflow.

Twice in the last decade, city leaders have studied closing the jail, transferring all prisoners to the regional jail and saving operational and some staffing costs. Both times, the average daily rate of housing 200 prisoners at Abingdon exceeded those costs. In November 2014, City Council rejected a regional jail agreement that would have cost the city an additional $1.2 million annually.

While Sullivan leaders ponder expanding the current jail or constructing a new one, that isn’t in the cards for Bristol. A new jail could cost $40 million, but the city reached it fiscal borrowing limit years ago and is paying down the $50 million it borrowed since 2012 for The Falls, a still half-empty shopping center near Interstate 81’s Exit 5.

With prisoner numbers rising despite a series of attempted fixes, the regional jail option again looms large on the city’s horizon.

Today and over the coming days, the Bristol Herald Courier undertakes an in-depth examination of the problems facing these two facilities, those who manage them and those who are housed there.

We will look at the impact drugs, pretrial inmates and other factors have on soaring prisoner populations, track the increases and search for some potential solutions. Along the way, the newspaper will introduce readers to some who have come through the system — both male and female — including those who’ve turned their lives around.

Meth up, meth labs down in Tennessee

Over the last decade, law enforcement agencies across Northeast Tennessee have seized more methamphetamine while the number of meth labs has decreased, indicating an influx in imported meth, a press release from the Tennessee Bureau of Investigation states.

When Steven L. Davis Sr. was a kid, he stole some green cupcakes on St. Patrick’s Day.

Our View: Why we did ‘Critical Mass’ jail project

Over the next week, we will deliver a special report titled “Critical Mass” that is the result of eight months of investigation and hard work by reporters, photographers and editors. Between today and next Sunday, we will feature 24 stories, dozens of photos, a number of colorful graphics, videos and podcasts, all aimed at helping you understand the magnitude of the issue.

BLOUNTVILLE, Tenn. — Stepping into the old Sullivan County jail in the basement of the county courthouse in Blountville is like experiencing d…

BLOUNTVILLE, Tenn. — One recent example of the dangers of working in the Sullivan County jail was an assault on former Corrections Officer Bre…

BLOUNTVILLE, Tenn. — Vernon Amaker — who’s been in and out of jails along the East Coast for the last 25 years — said Sullivan County’s lockup is the worst.

Overcrowded jails across the American landscape have adverse effects on prisoners that could even be fatal, psychology experts say.

Sullivan committee: Jail solutions 'elusive as they are expensive'

BLOUNTVILLE, Tenn. — The chairman of a committee that spent three years studying how best to alleviate overcrowding at the Sullivan County jail said in his final report that solutions proved to be as “elusive as they are expensive.”

Sullivan County needs a new jail, but we also need to eliminate or reform the use of cash bonds to grant immediate relief to our jail.

BLOUNTVILLE, Tenn. — Overcrowding not only causes space and safety issues inside the Sullivan County jail, it leaves little room to offer reha…

BRISTOL, Va. — An alternative sentencing program for nonviolent offenders is helping reduce overcrowding at the Bristol Virginia Jail, but its… 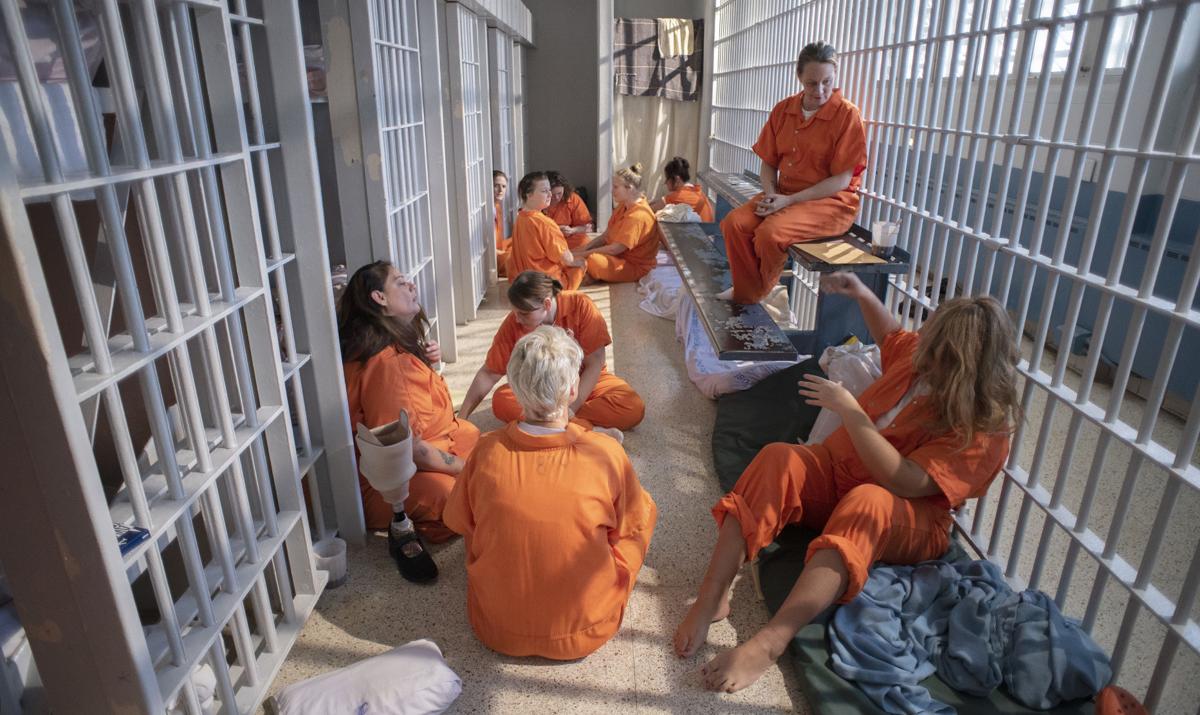 Inmates in the Bristol Virginia Jail pass their time in the cramped and overcrowded women's cell. 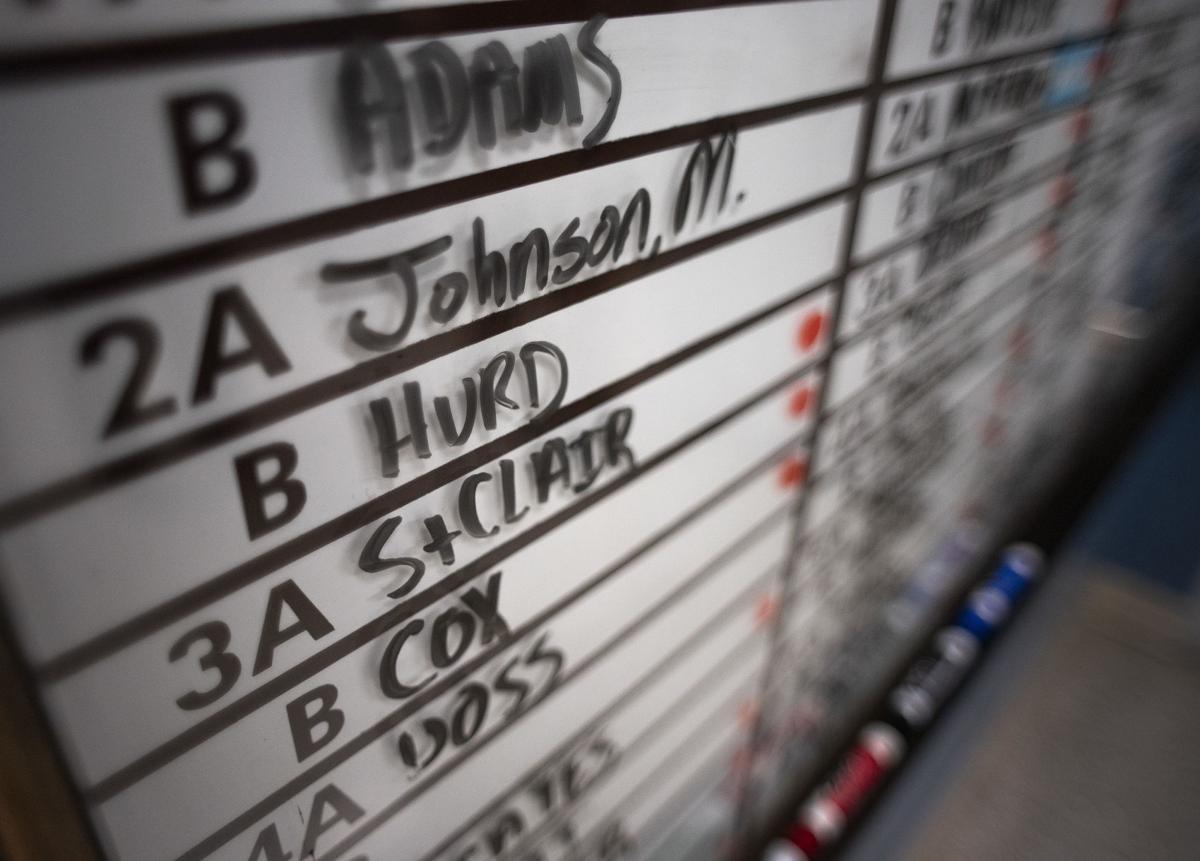 Names of current inmates are listed by their cell assignment in the Bristol Virginia Jail. 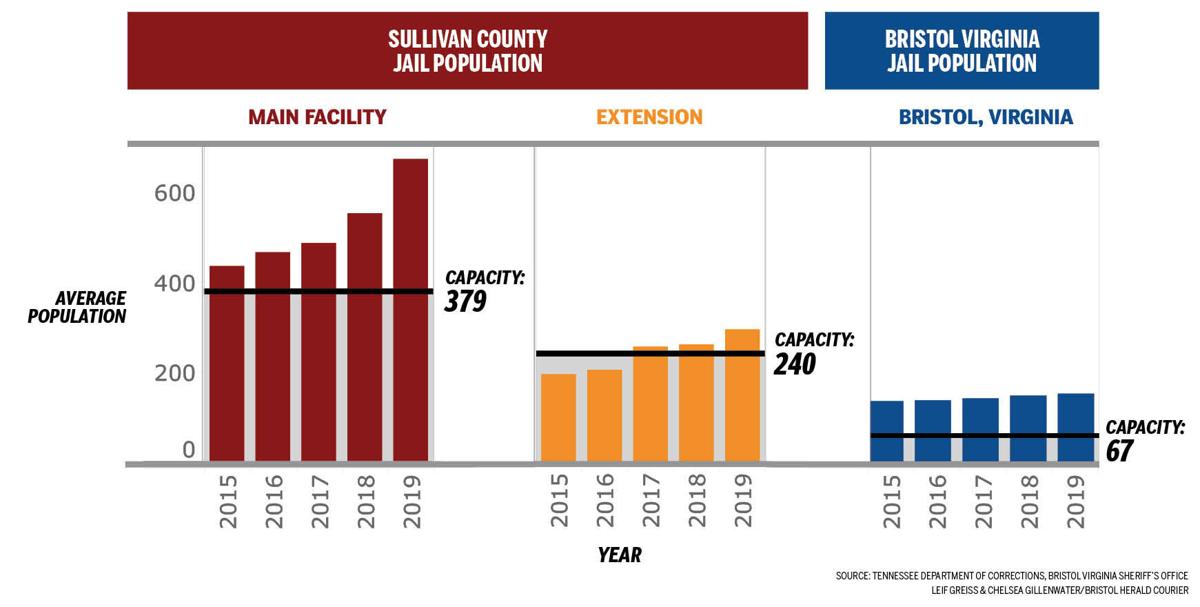 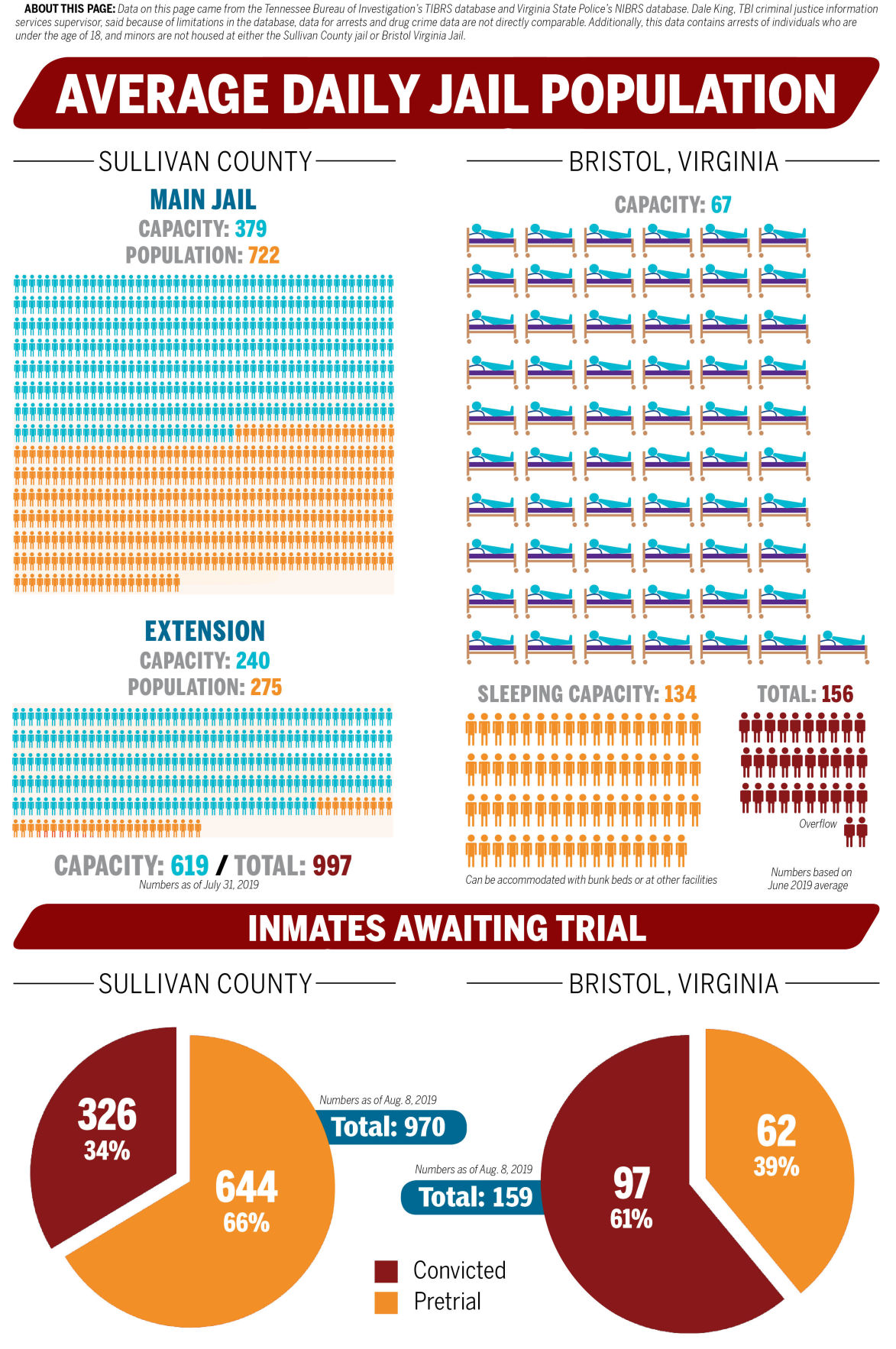