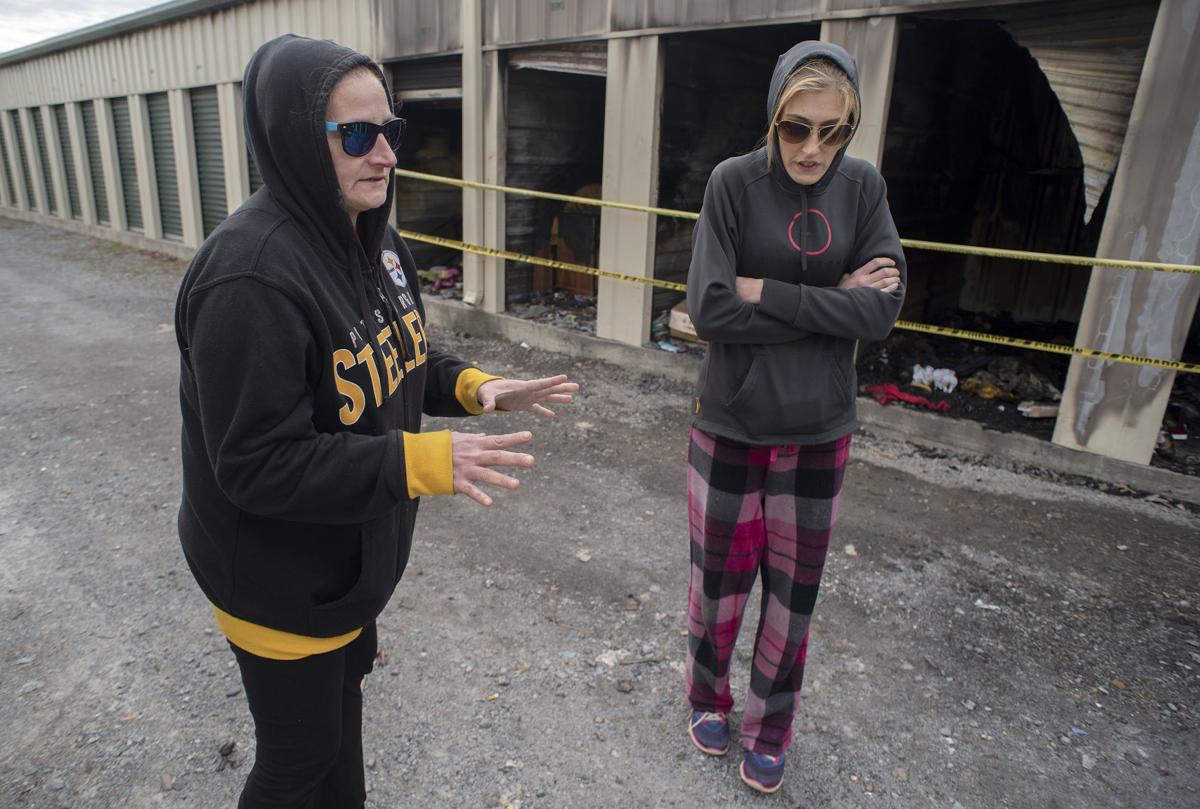 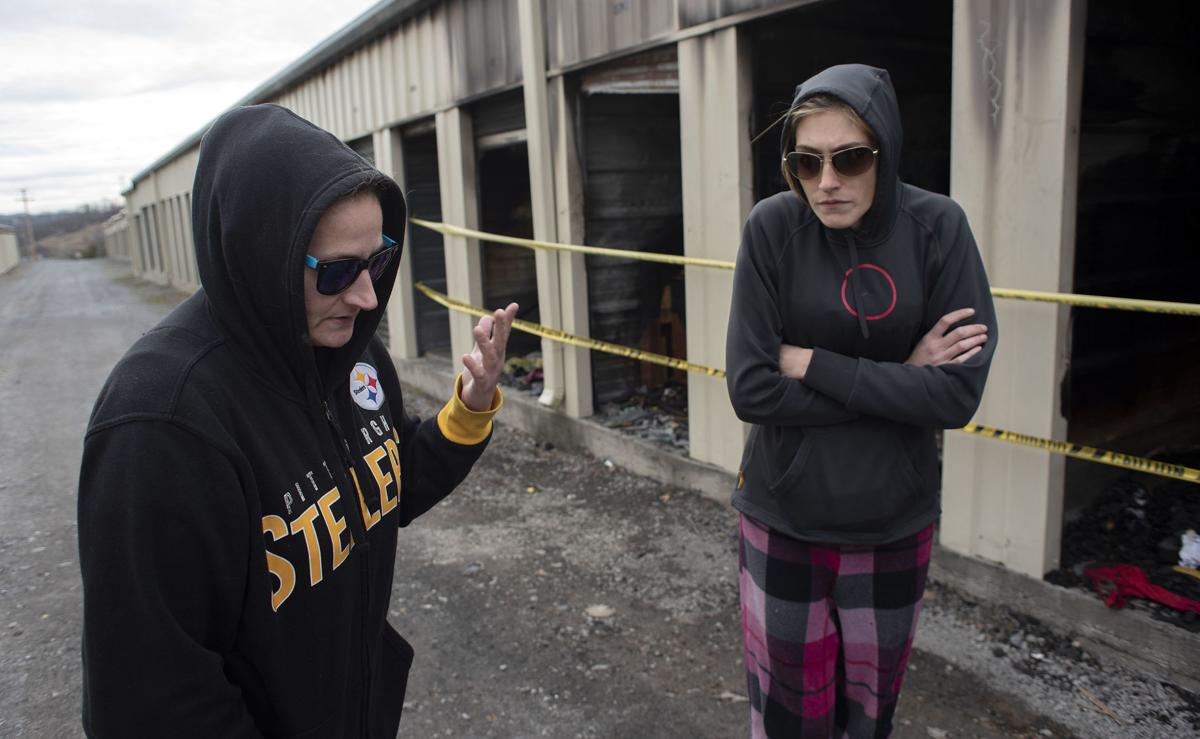 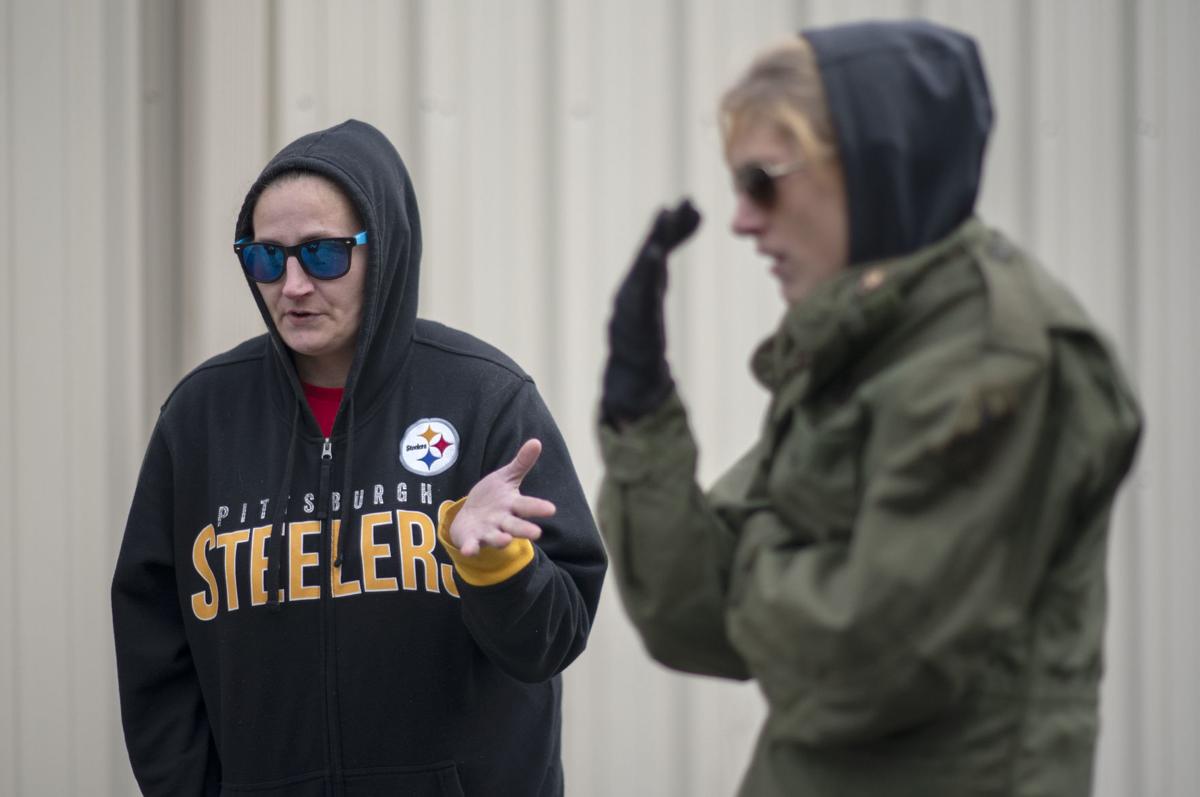 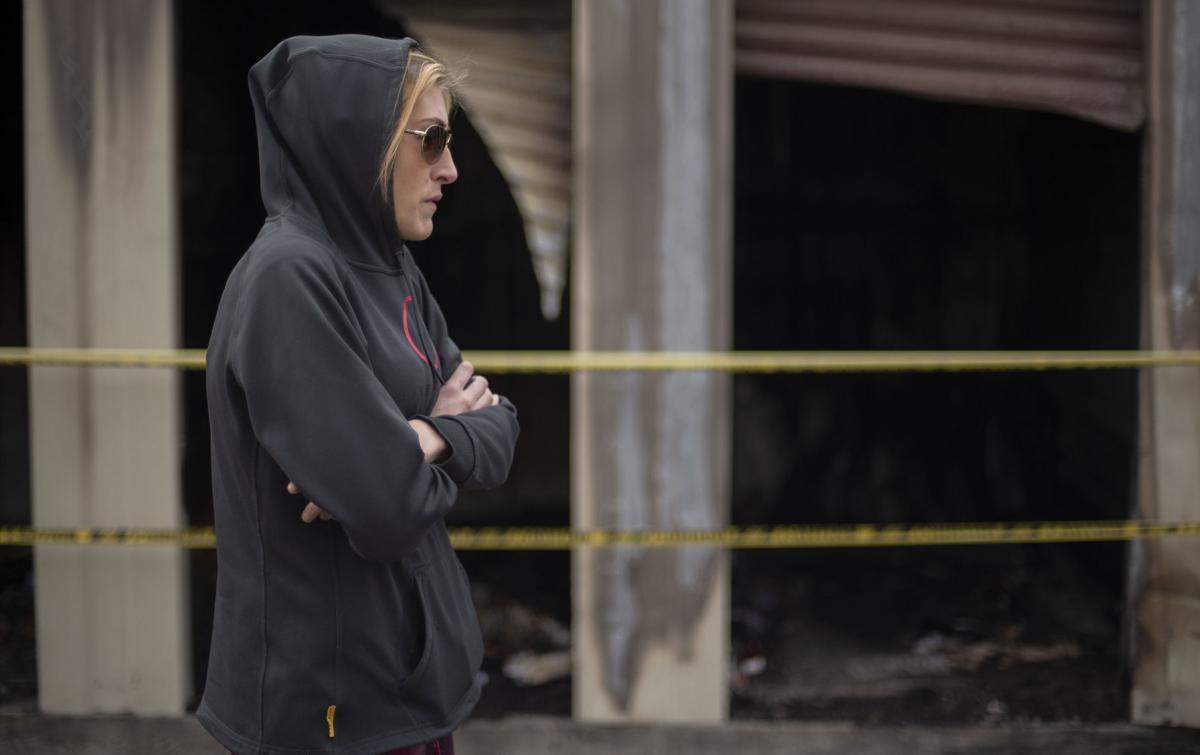 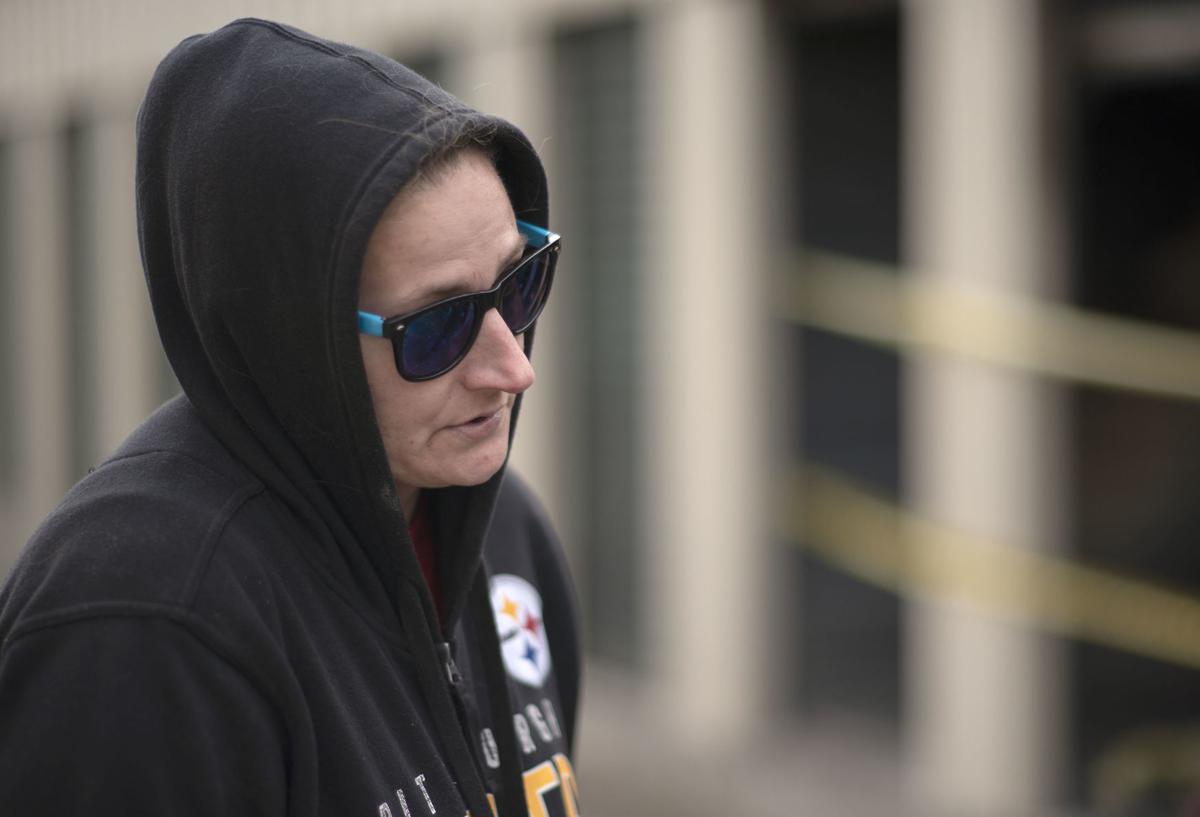 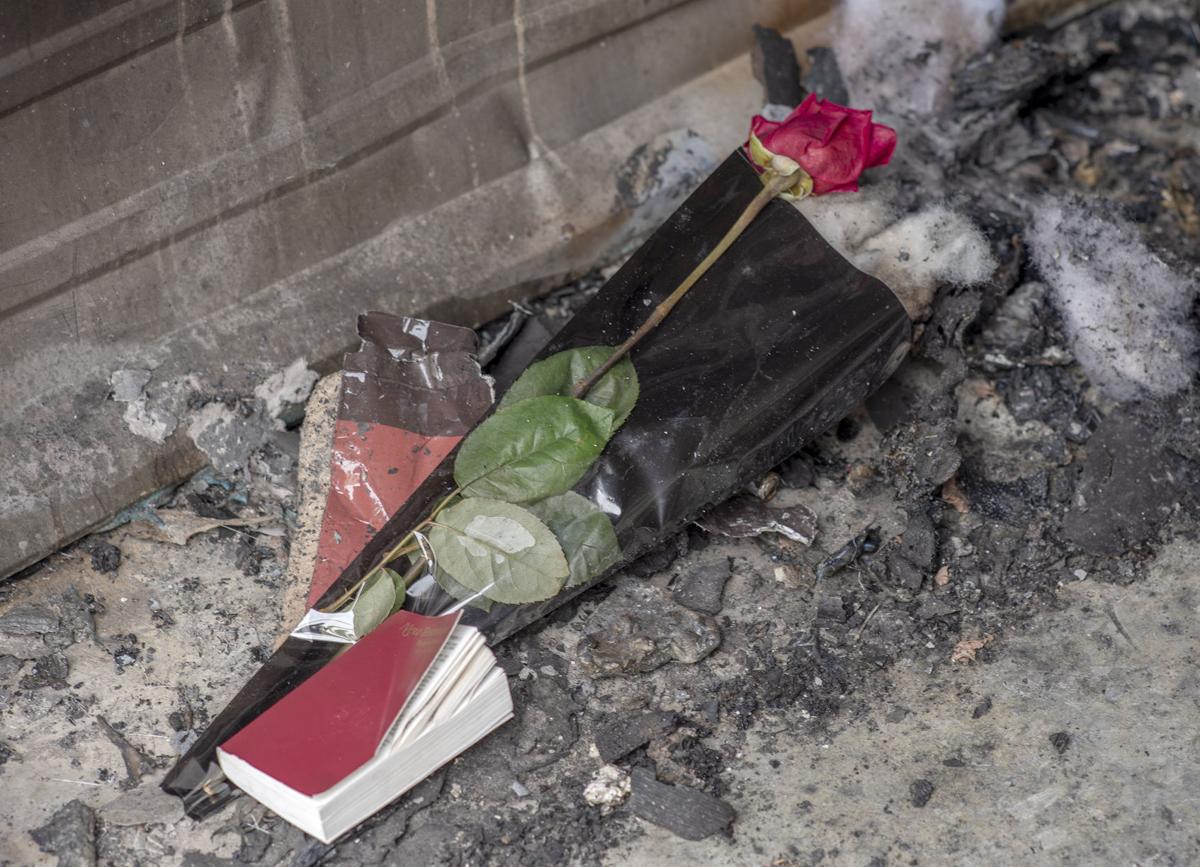 A rose and a New Testament left by Abigail Lampkins in the Glade Spring storage unit where her father, William "Bryan" Lampkins died in a fire Saturday afternoon. 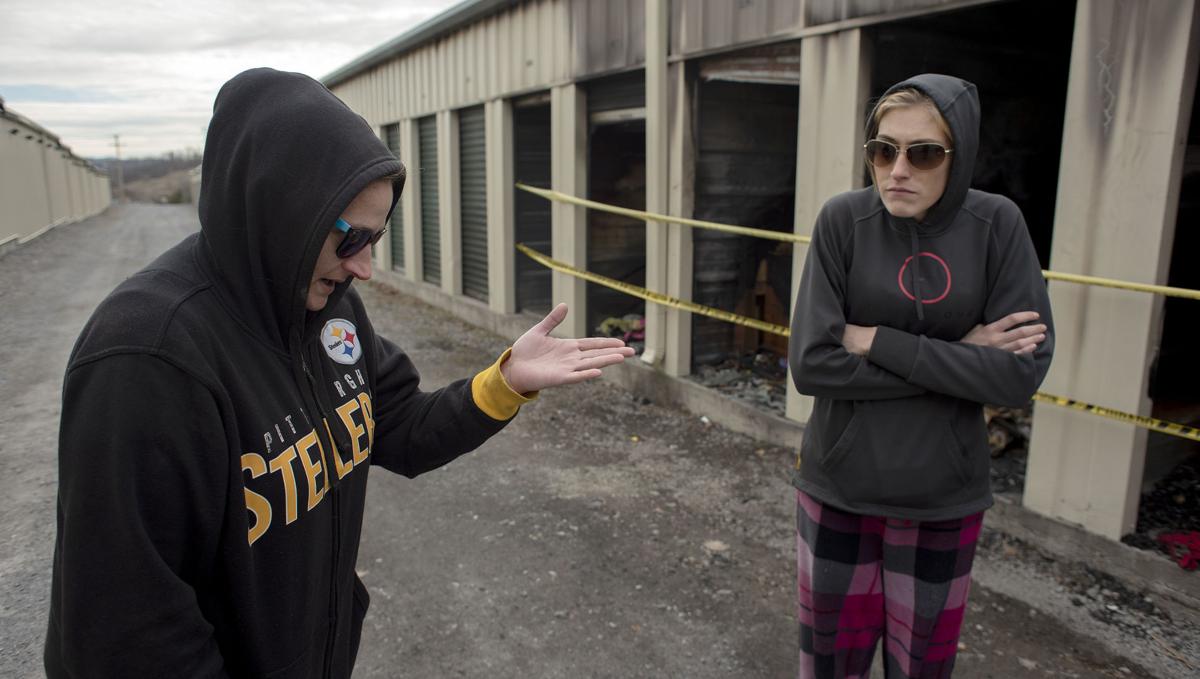 GLADE SPRING, Va. — While visiting the storage unit where her father died in a tragic fire last weekend, 24-year-old Abigail Lampkins said Thursday she has theories about what happened.

Lampkins, of Meadowview, and her mother, Heather Lampkins, spoke with the Bristol Herald Courier at the Glade Spring Mini-Storage about the death of Walter “Bryan” Lampkins, 46. The man had been staying in the unit for a couple of days when fire ignited, but the door was locked, and he was unable to escape, the Washington County Sheriff’s Office said.

Kelly Lynn Goff, 46, has been charged with abduction and involuntary manslaughter in the case. Surveillance video shows Goff closing the door and locking it as she left the unit, according to a criminal affidavit filed in Washington County Domestic Relations Court.

Sheriff Blake Andis said Goff, who was in a relationship with Walter Lampkins, was charged because she locked the door. The fire likely started at a space heater, but Andis said Thursday the cause is being investigated by the Virginia State Police.

Abigail Lampkins, who placed a long-stemmed red rose and a New Testament Bible on the unit’s concrete floor, is still trying to learn exactly what happened Saturday. She and her mother said they question whether there was any intention or premeditation, but detectives have provided few answers.

His daughter noted that, until that day, Goff never locked the unit. Before then, her father was able to come and go whenever he wanted, she said. He had been staying in the unit, which had a place for him to sleep, for a couple of days when the fire ignited, she added.

The daughter said she last saw her father the Wednesday before the fire. She stopped by the nearby Econo Lodge motel, where she said he had been staying with Goff, who lived and worked at the motel.

“A majority of the time, he was in the motel room,” she said. “Here and there, he would stay in the [storage] building.”

She explained that her father sometimes stayed in the storage unit, which Goff rented, likely due to arguments.

The pair had been living together at the motel because he was unable to find help elsewhere, his daughter said.

“He couldn’t stand her,” she added.

During her last discussion with her father, she said she told him to cut ties with Goff. The pair had known each other since high school and had a child together, she said.

“If you cut ties with her completely, I can make sure you get to your doctors’ appointments and all that you need. I can’t let you live with me, because I live with my mom,” she recalls telling her father.

Heather Lampkins has been separated from her husband for about 20 years, but they never divorced. She said she also wanted to help him.

“I was trying to start helping him get away from her so he wouldn’t need her so-called help,” she said. “We stayed friends. Even though we didn’t stay in contact, I still care.”

Walter Lampkins was typically quiet, didn’t get into anyone else’s business and had friends, his daughter said.

Abigail Lampkins said her father, who had no driver’s license or phone, was doing well the past year. They talked regularly, and she said she hoped to help her father more, possibly by getting him a cellphone. He did not have a recent job but has held “good jobs” in the past, his family said.

The Lampkinses said that he and Goff would “fuss,” but their arguments didn’t become physical.

“He just wanted to get away from her, but no one would help,” Heather Lampkins said.

Abigail and Heather Lampkins question whether the man could have been saved, especially if he had a phone or if Goff had let authorities know he was in the unit.

“She needs to sit in jail,” Abigail Lampkins said of Goff. “Even if she didn’t mean for the fire to happen, she shouldn’t have locked that door.”

She said she hopes to go to court as the case continues.

Goff is being held without bail at the Southwest Virginia Regional Jail in Abingdon.

RECENT HOME SALES: Take a look at homes sold around the region

A rose and a New Testament left by Abigail Lampkins in the Glade Spring storage unit where her father, William "Bryan" Lampkins died in a fire Saturday afternoon.