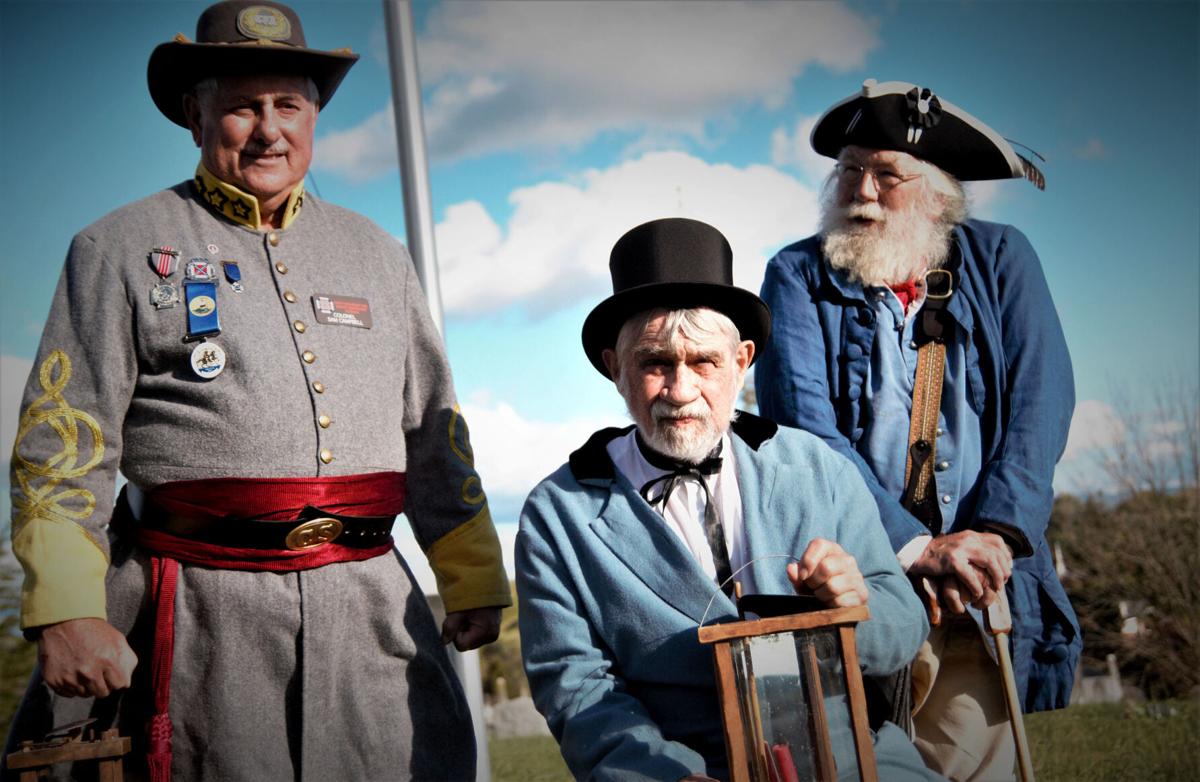 From left to right, Sam Campbell, John “Pappy” Hawthorne and Tom Vaughan portray three of the ghosts who will participate in the East Hill Cemetery Ghost Walk on Friday, Oct. 22, and Saturday, Oct. 23. 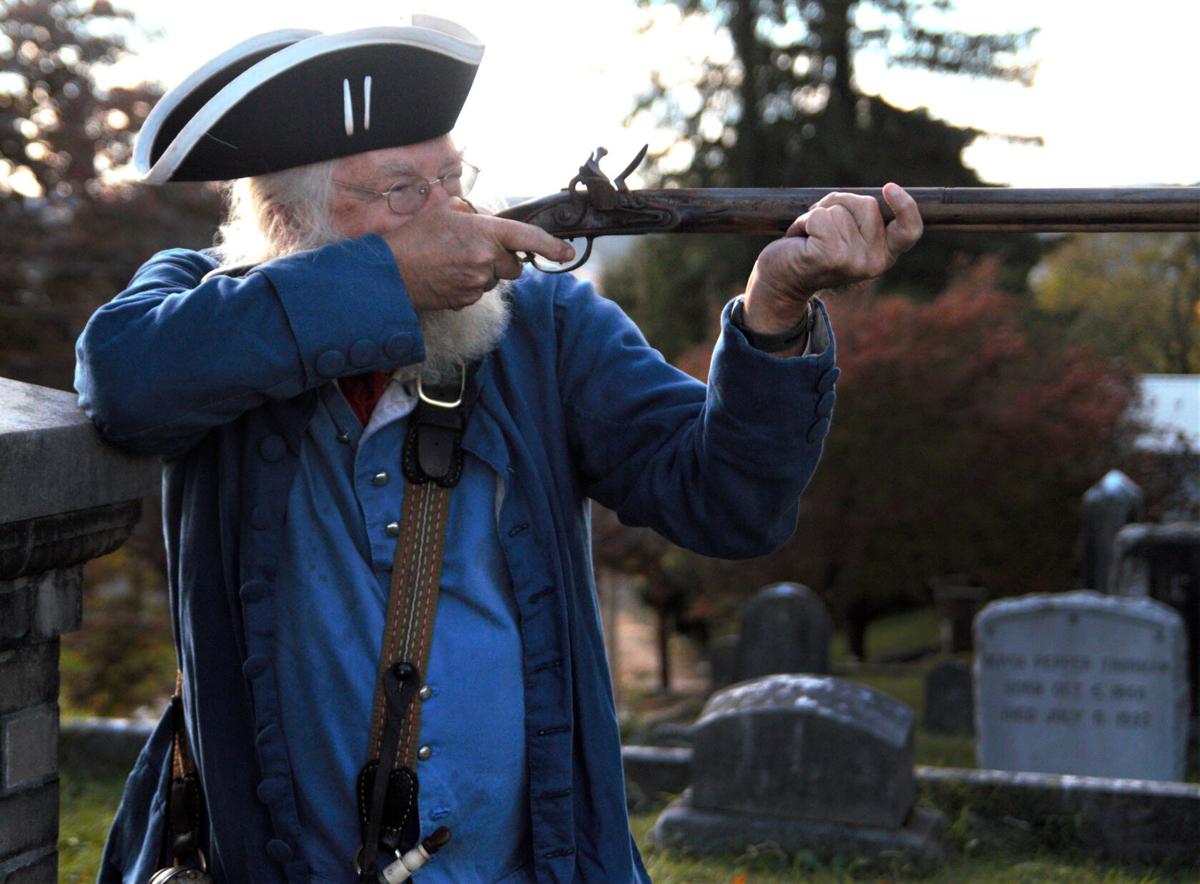 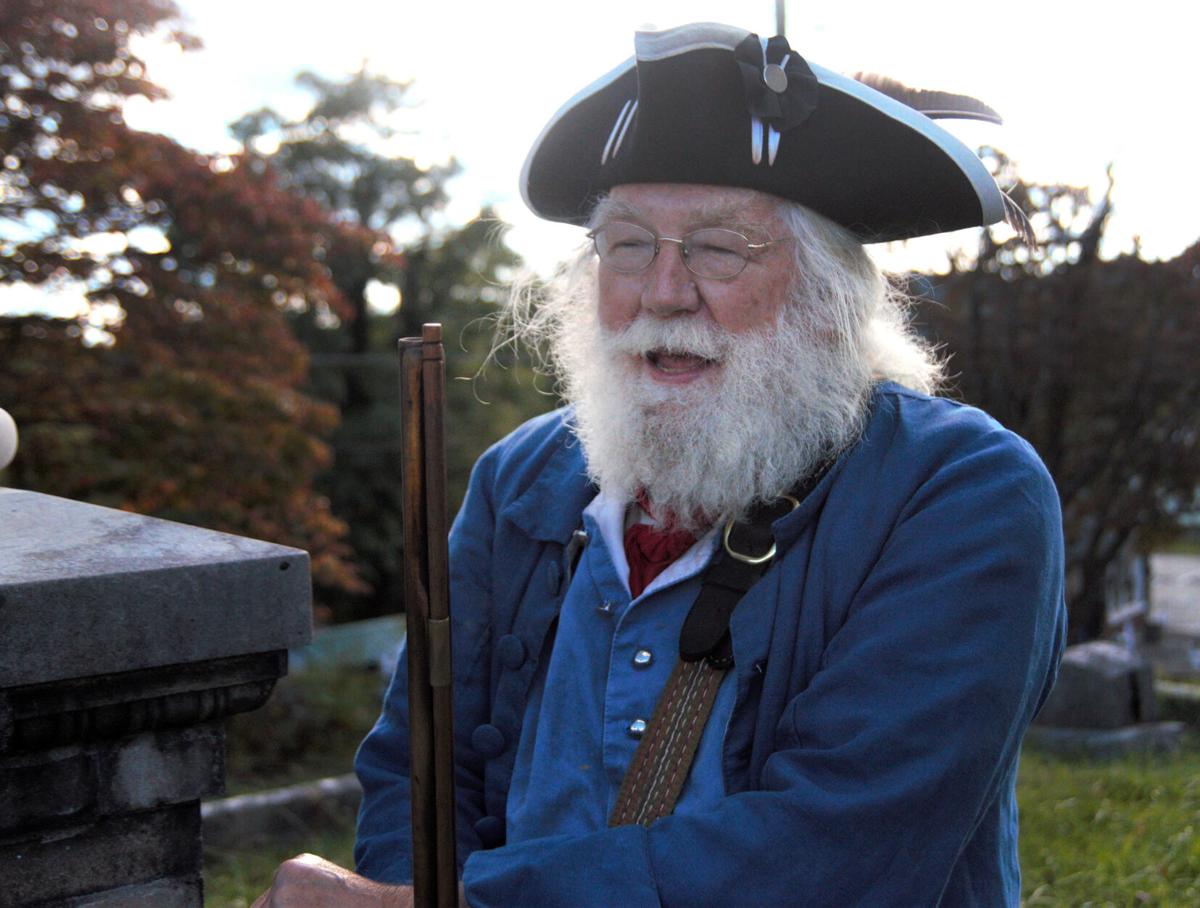 Tom Vaughan, 75, plays Gen. Evan Shelby Jr., who served in the Revolutionary War, during the Ghost Walk event. Shelby died in 1794 and is buried atop East Hill Cemetery. 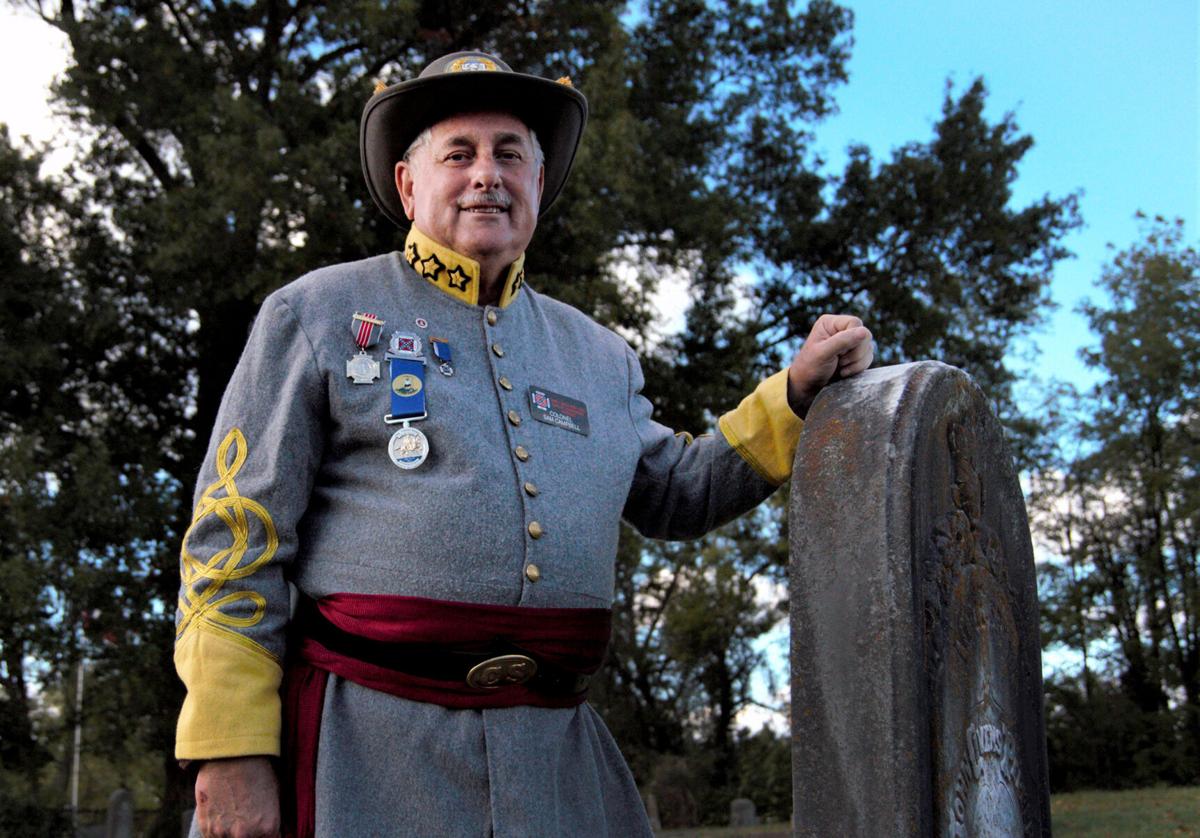 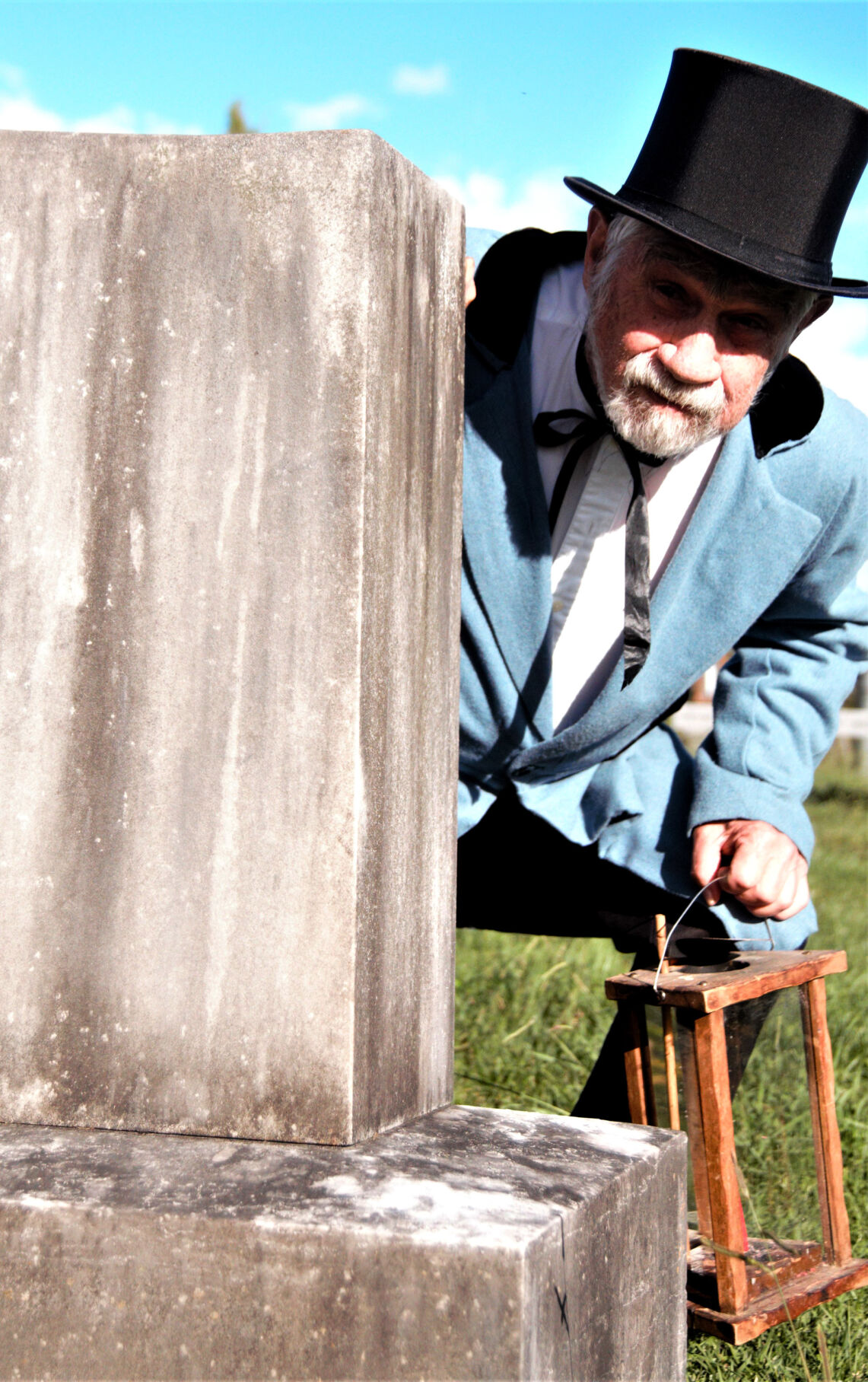 Neither of them was sad, but proclamations were made.

They plan to return to the hallowed ground Friday, Oct. 22, and Saturday, Oct. 23. Each apparition said they will bring some ghostly buddies each night, beginning at about 7 p.m. Altogether, they will lead the East Hill Cemetery Ghost Walk.

A donation of $5 per person is the admission to take the Ghost Walk. Funds raised will help administrators of the historic East Hill Cemetery maintain the sizeable grounds.

Now in its 10th year, the Ghost Walk features a number of East Hill’s prominent residents. They return each October to stretch their weary bones and provide stories of their lives and triumphs for the crowds gathered.

“All of East Hill Cemetery was his property,” Hawthorne, who was clad as Goodson on Saturday in the cemetery, said.

Not that Gen. Evan Shelby Jr. would know. He served in the French and Indian War and the American Revolution. In 1766, he settled in what would become Bristol. Tom Vaughan steps into the visage of Shelby during the Ghost Walk.

“In years past during the Ghost Walk,” Vaughan, 75, said, “I’ve seen everything from people who wanted to talk to me, which made the next group wait, to people exiting rather quickly.”

They do not mean to spook or scare folks during the Ghost Walk. However, sometimes they do. For instance, several years ago, a woman in the darkened midst of the tour, which routes through the spooky graveyard, apparently could handle no more.

“She took off,” Vaughan said, “cut right across the cemetery, and rather quickly, too.”

Gen. Shelby died in 1794. After several prior burials around town, his bones were literally boxed up, carried to and buried in East Hill Cemetery in 1872.

In addition to raising funds for upkeep of the cemetery, participants including Sam Campbell intend to impart nuggets of history. He’s stepped into the boots of a range of dead characters in the past. This year he revives Abram Fulkerson.

“He was a Confederate colonel in the Civil War,” Campbell, 70, said. “He fought in Northern Virginia. He was part of The Immortal Six Hundred.”

The Immortal Six Hundred were prisoners of war. They were held in South Carolina and used as human shields.

When people on the Ghost Walk approach Campbell as Fulkerson, he will tell a short story of the man’s life and of his Civil War experiences and life thereafter. Fulkerson, who died in 1902, is buried just inside East Hill’s main gate.

“We talk about factual things,” Campbell said. “People need to know the early settlers of Bristol, who helped make Bristol what it became.”

Some of that history may prompt interest. In addition to enjoying its fun factor, learn of Gen. Evan Shelby Jr. Discover Abram Fulkerson. Encounter as best anyone can one Samuel Goodson, upon whose property the cemetery exists and the Ghost Walk will commence.

“He ordered the bricks. He ordered the lumber. His house was going to be right here,” Hawthorne said. “But one night he strayed.”

Learn more of Goodson’s shenanigans and life’s work during the Ghost Walk. Those who stroll the grounds will come upon, meet and hear from the late city founder and late-night Romeo.

» Parking: Across the road at Slater Community Center

From left to right, Sam Campbell, John “Pappy” Hawthorne and Tom Vaughan portray three of the ghosts who will participate in the East Hill Cemetery Ghost Walk on Friday, Oct. 22, and Saturday, Oct. 23.

Tom Vaughan, 75, plays Gen. Evan Shelby Jr., who served in the Revolutionary War, during the Ghost Walk event. Shelby died in 1794 and is buried atop East Hill Cemetery.