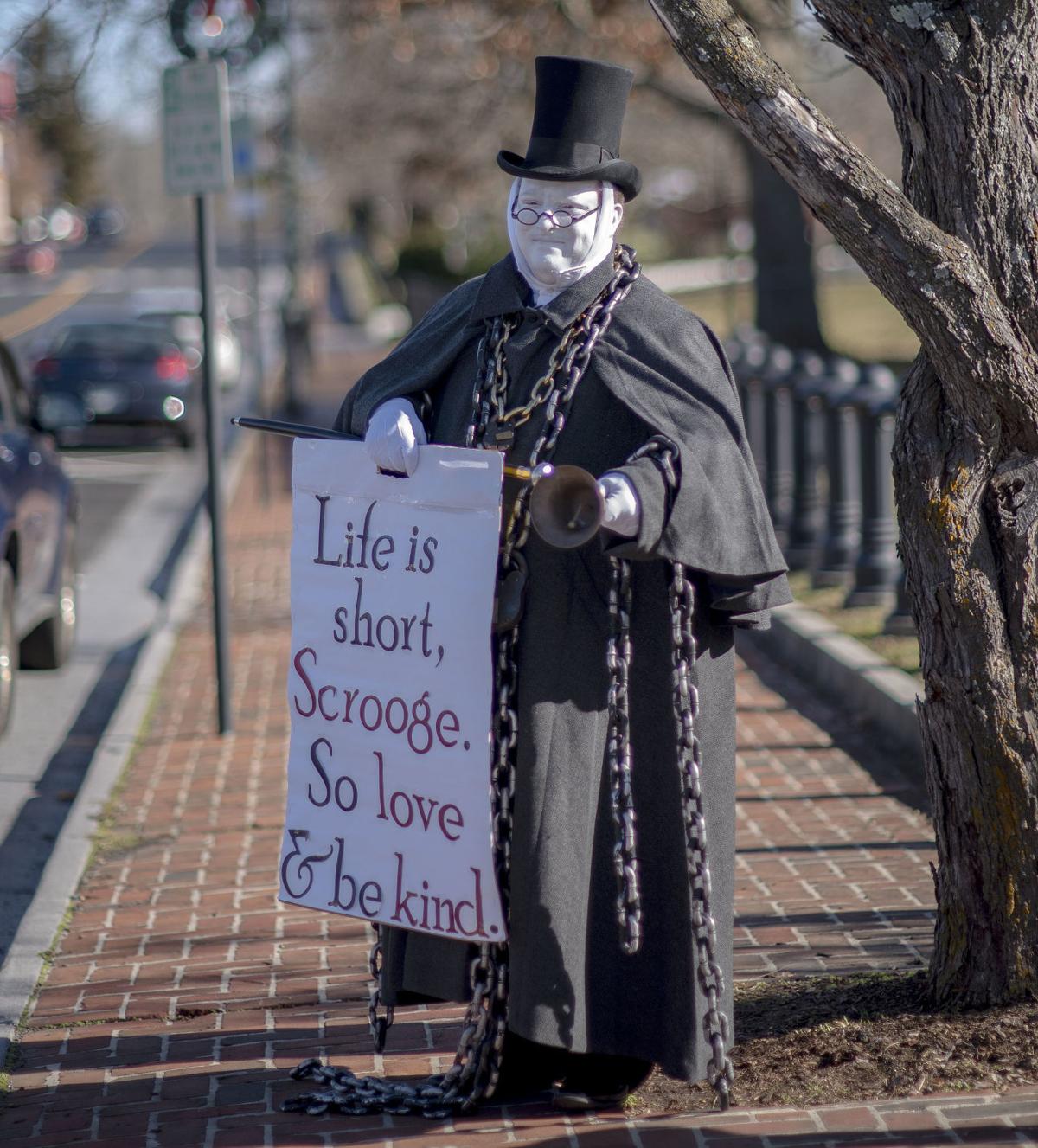 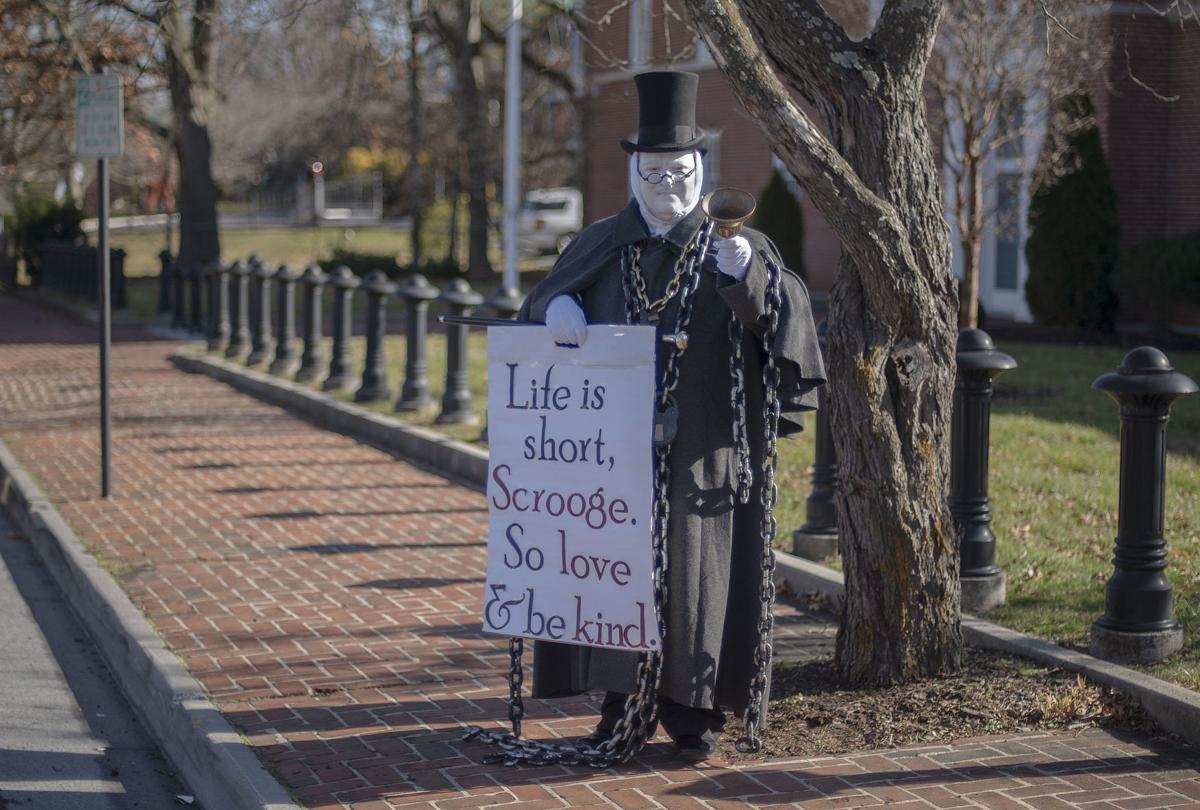 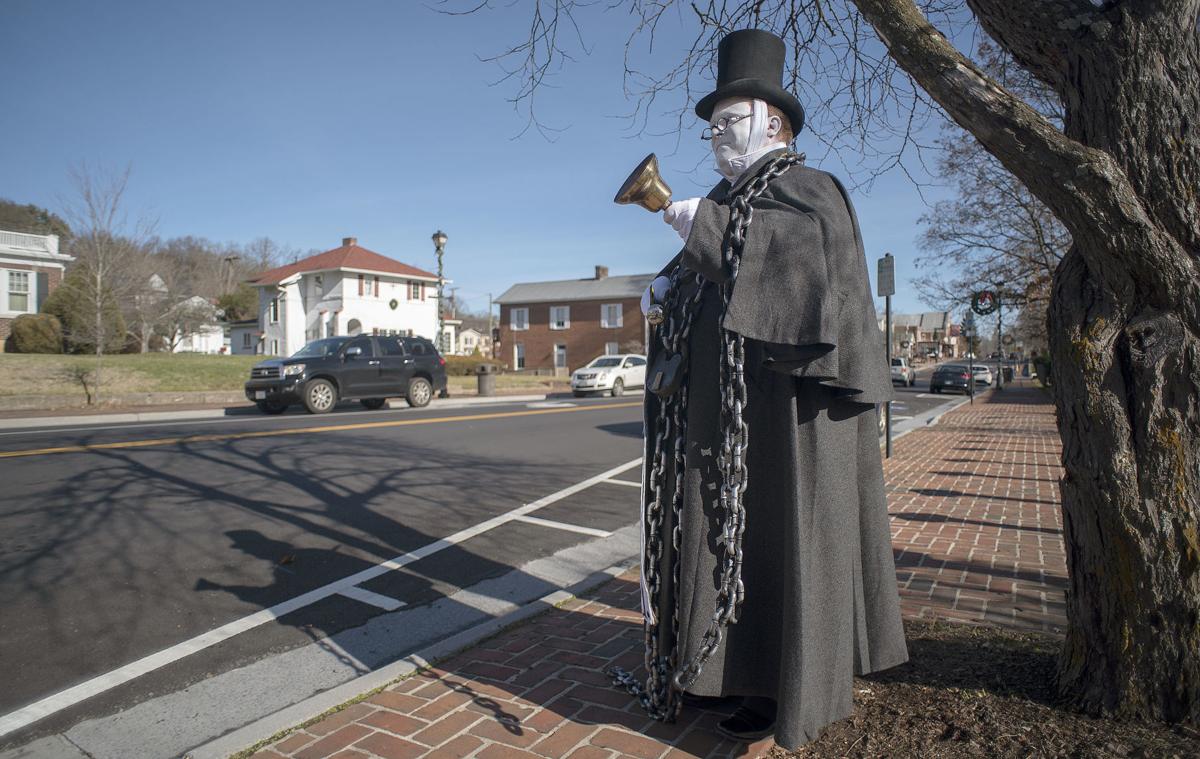 In his right hand, he held a sign that said, “Life is short, Scrooge so love and be kind.”

Von Castle stood on the West Main Street sidewalk in front of the federal courthouse, wearing full ghostly makeup and costume — complete with a top hat, chains and locks — and ringing a bell. He carefully chose the character, spot and time to urge everyone to take stock this Christmas season.

In the familiar Charles Dickens tale, Marley’s well-intentioned spirit returns to warn Scrooge to mend his ways before it’s too late and foreshadows the arrival of three more spirits — ghosts of Christmases past, present and future — who will visit Scrooge that very Christmas Eve.

“Not only is this a time for festivity but a time for reflection and to evaluate how well we’ve been a good neighbor to others,” von Castle said Monday night. “Marley is the most memorable and effective in terms of reminding Scrooge and the reader that life is short, and we have very little time to do the good work of being kind and loving to our neighbors, so we best make use of the time we have to do that.”

The 1843 tale is a favorite of von Castle, who works as assistant dean of students and director of housing and residence life at Emory & Henry College.

“Unlike a lot of Christmas stories we see, this one involves a haunting by spirits. It can a little hard for folks to read; it’s not your typical Christmas story,” he said.

Von Castle said he’s been struck by a growing lack of civility in today’s society, whether in the media or in personal interactions.

“Everything you see when you turn on the television — and sometimes I think folks want to say that it is only isolated to the political sector — but people underestimate how some of that rhetoric and the ways they’re modeling civility affect others,” he said. “I work with students, and I see how some of their ways of navigating conflict and people who are different than they are … have changed over time.”

He said he has witnessed people being dismissive of others simply because they have a different viewpoint.

“I think when we disagree with somebody, we’re quick to not only write off their idea but their whole humanity, as if they’re less valuable as a person because of an idea they have,” he said. “I think that’s problematic, and it’s only going to make us more divisive and make everyday life a little less supportive and caring.”

“I know this isn’t a monumental effort, but I thought Christmas Eve would be a good time to think about ways I’ve been unkind or uncivil and use the time for personal reflection and reminding others the importance of being kind and loving and generous to others,” he said.