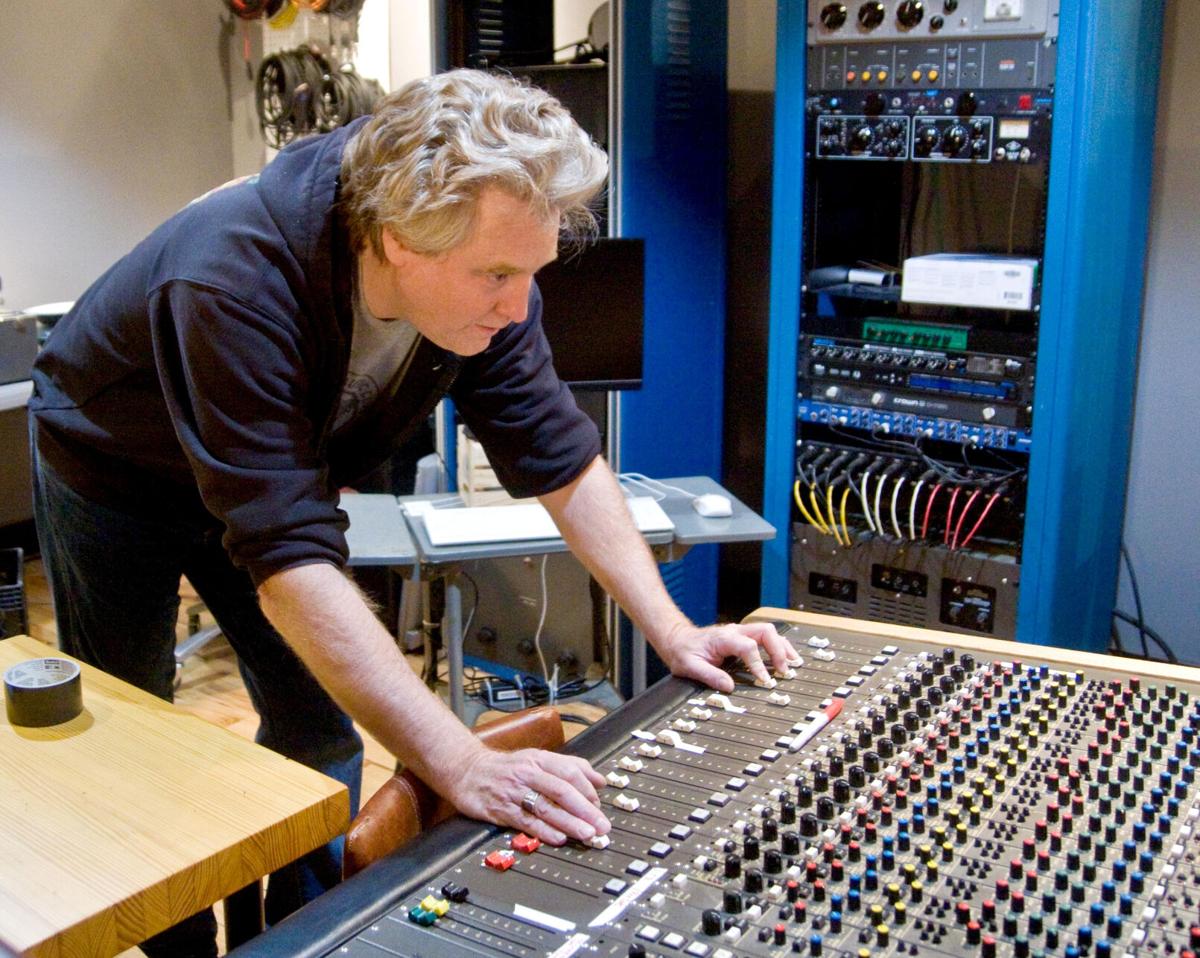 Clint Holley, who opened The Earnest Tube in 2017, mixes a recording. 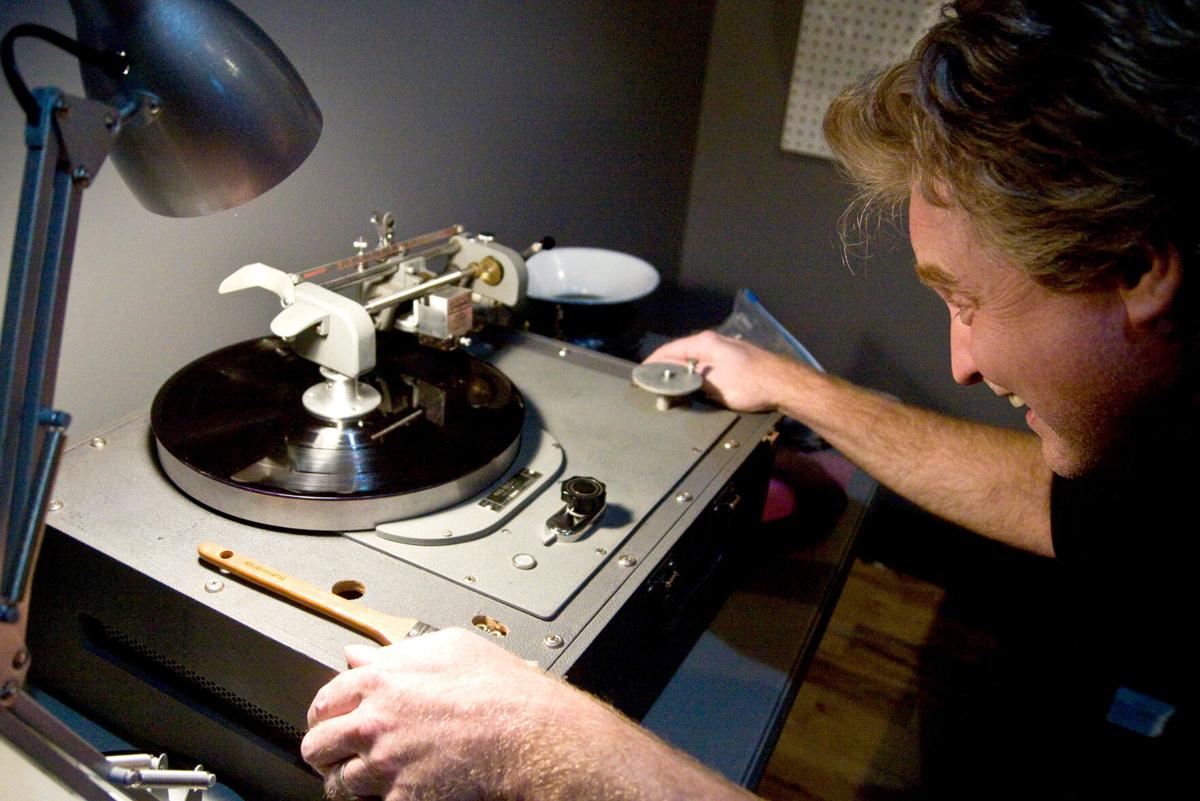 With vintage equipment, Clint Holley cuts a song directly to a lacquer disc, from which vinyl records can be made for mass production. 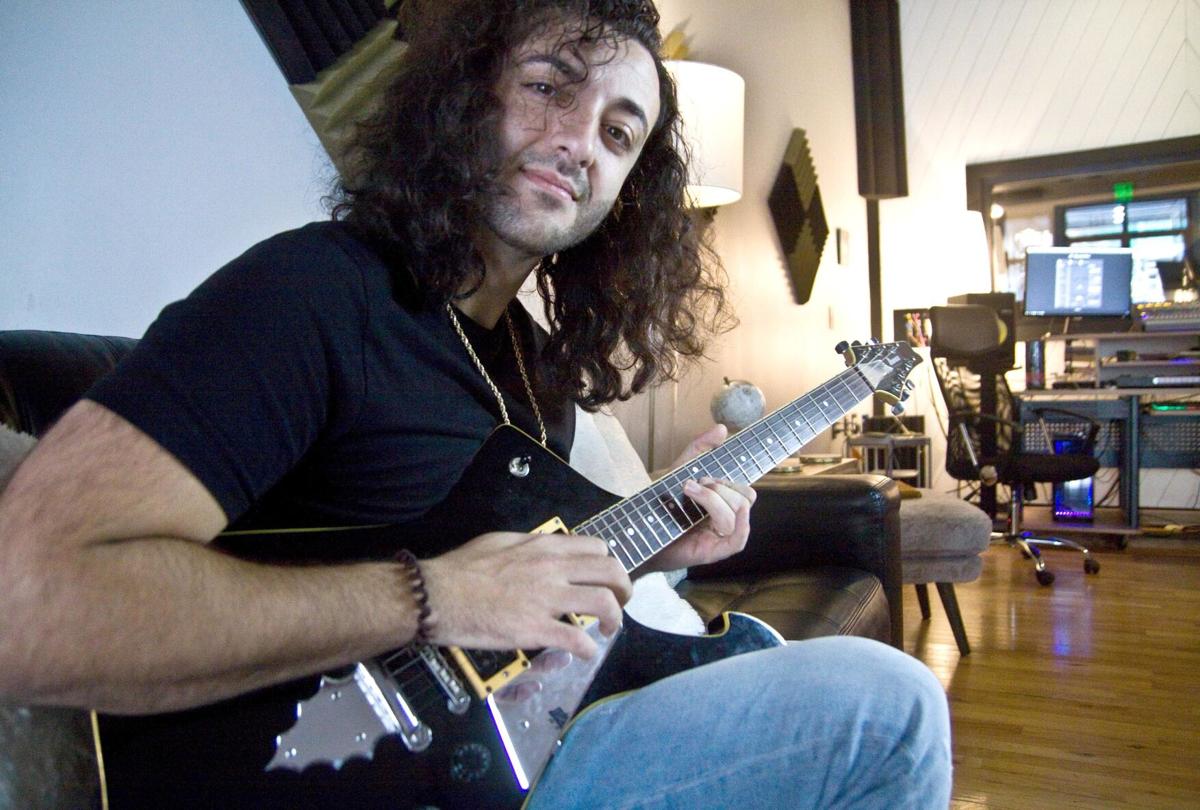 Matt Smile, a lifelong fan of rock band KISS, plays an Ibanez Iceman guitar made famous by KISS' Paul Stanley, in the lobby of his recording studio, Audioasis. 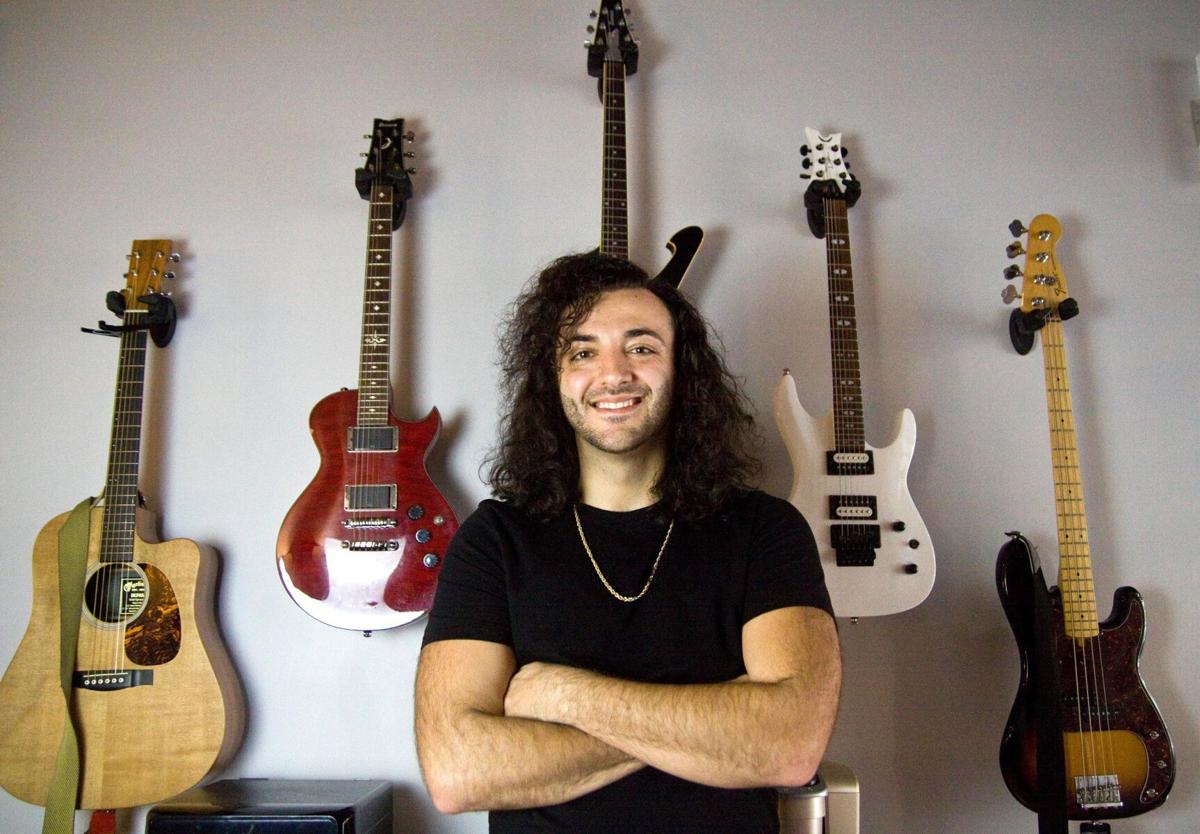 A Martin to the left, a Fender Precision bass to the right, guitars adorn a wall inside the lobby of Matt Smile's Audioasis recording studio. 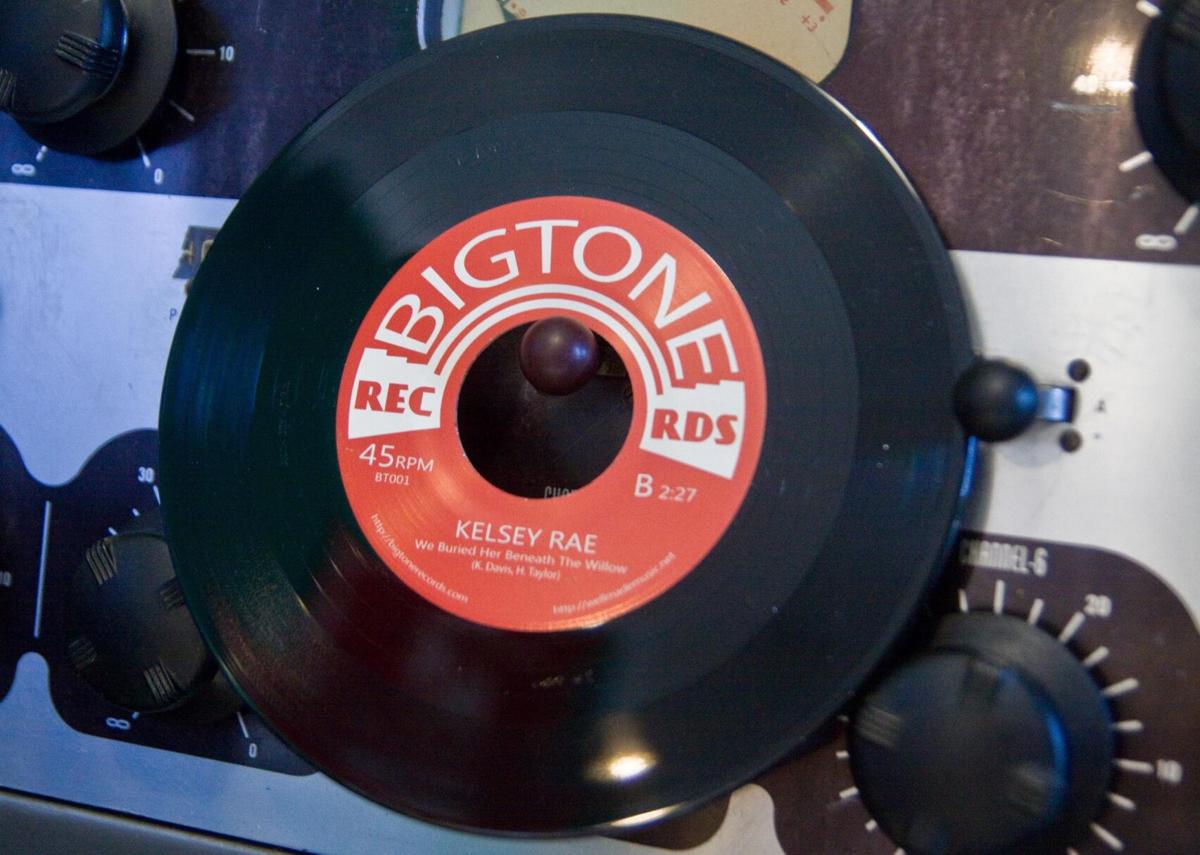 A record from country singer Kelsey Rae, made at Bristol's BigTone Records, awaits a needle to twang within its grooves. 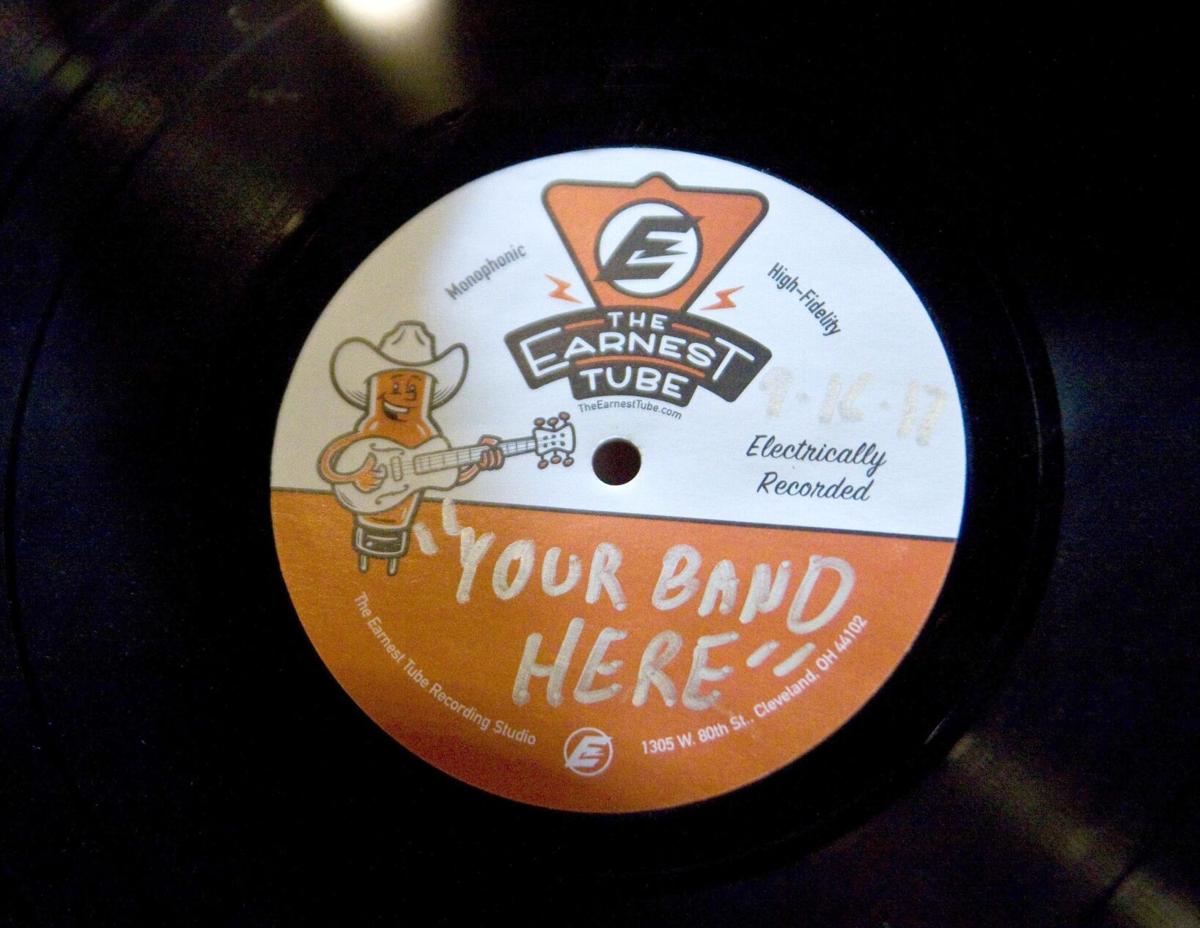 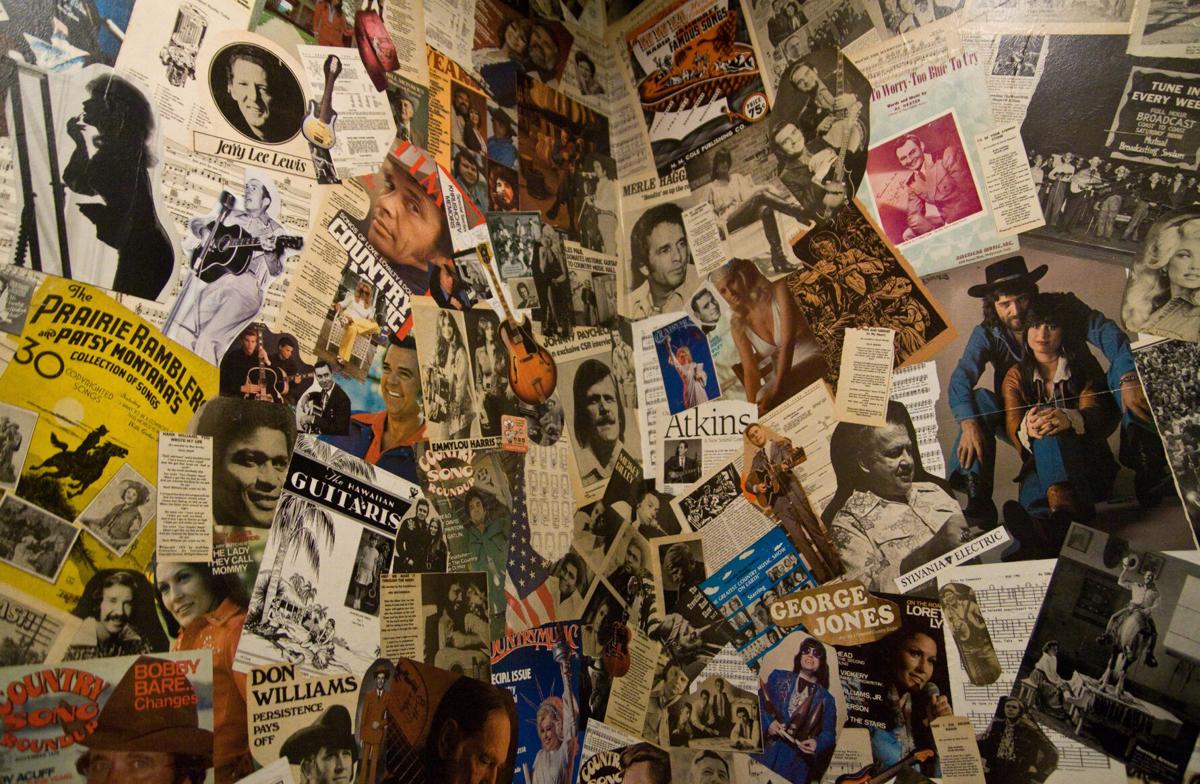 Music history permeates The Earnest Tube -- even on the walls of its bathroom. 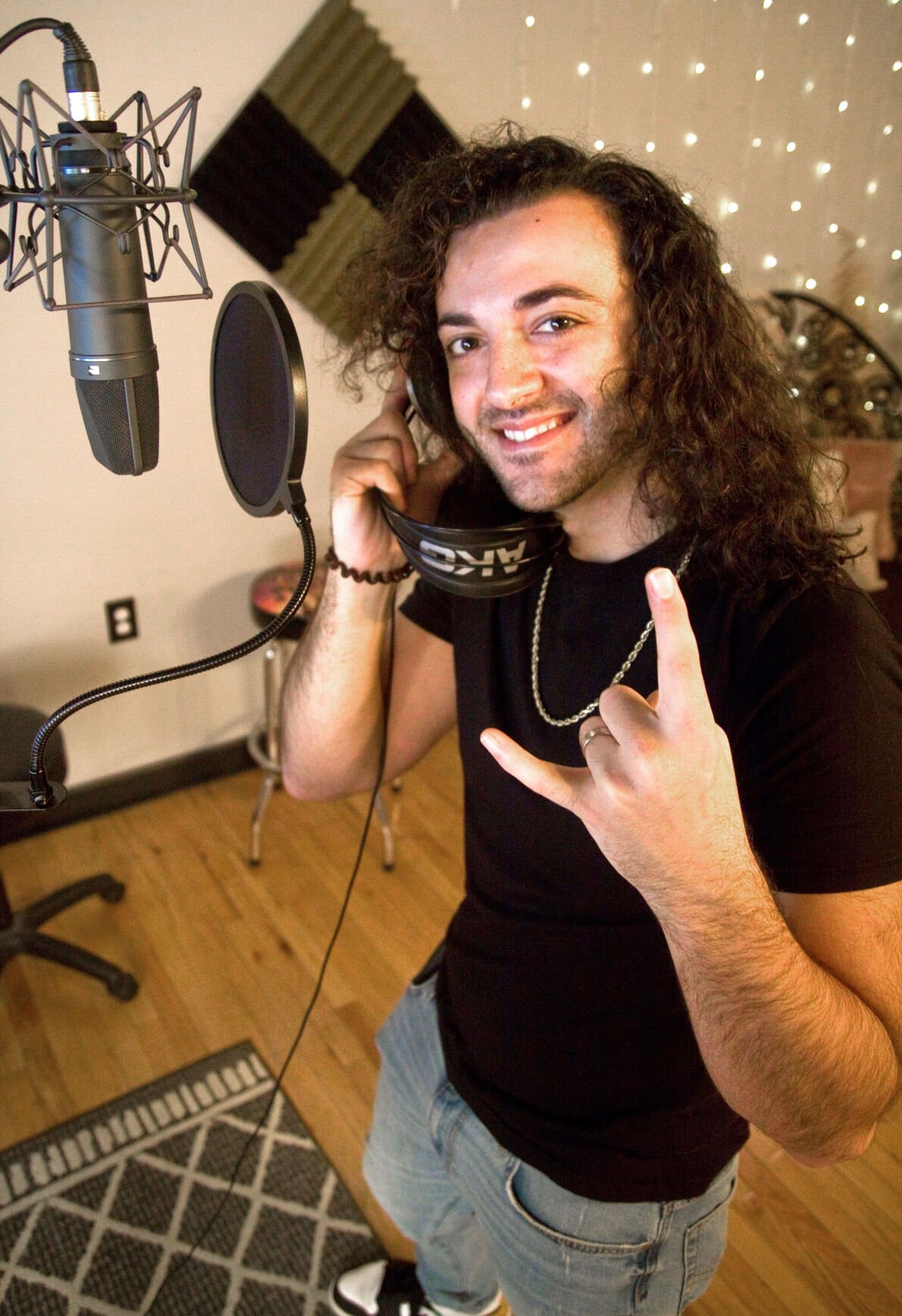 At the microphone and ready to record, Matt Smile offers a metal salute moments before the recording of a vocal. 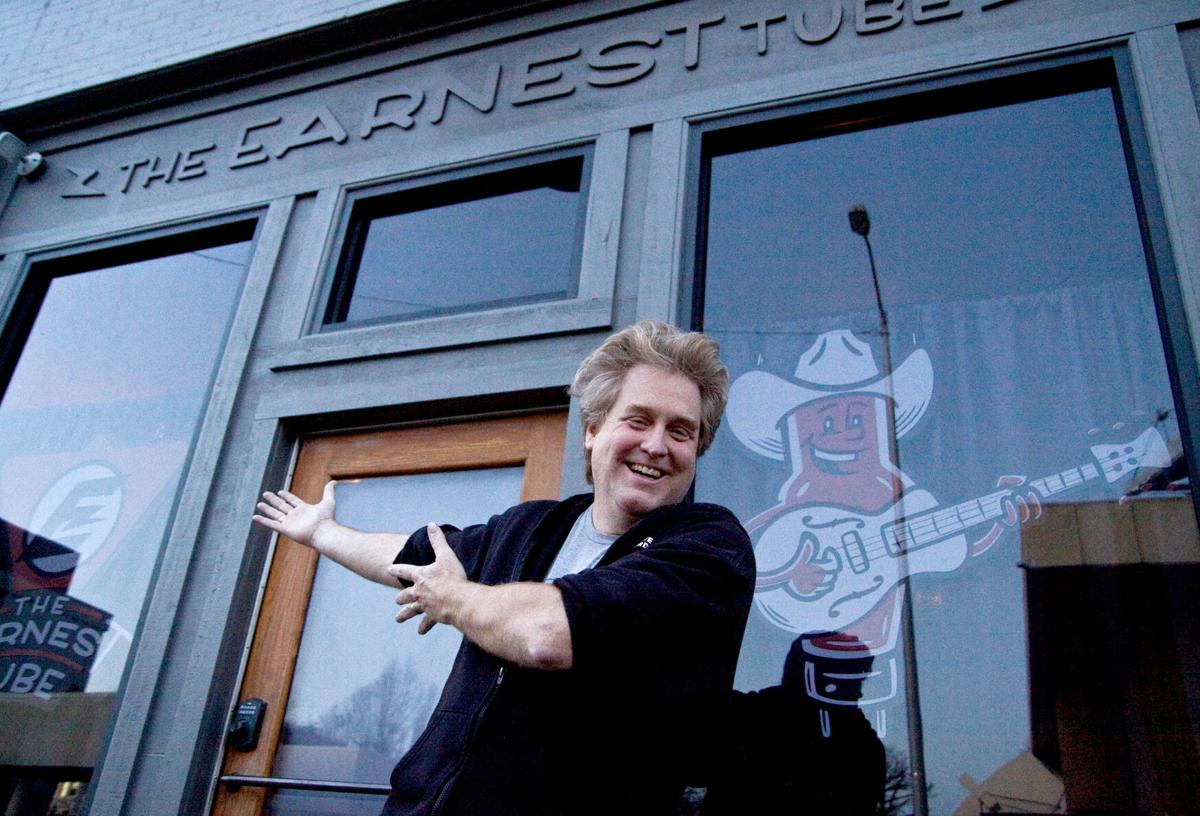 Clint Holley, who lives in Cleveland, Ohio, owns and operates The Earnest Tube, a recording studio in downtown Bristol.

That dates to 1927, courtesy of Ralph Peer, Jimmie Rodgers, The Carter Family and company.

Today, music made in Bristol amounts to a daily thing. Multiple recording studios stand upon the shoulders of 1927 as living legacies. They’re not museum exhibits. They reside on, around the corner, and nearby downtown’s commercial artery, State Street.

“This is where the spring came out of the mountains,” said Clint Holley, owner of The Earnest Tube, a recording studio with a vintage touch in Bristol, Virginia.

Destinations including the Birthplace of Country Music Museum and the annual Bristol Rhythm & Roots Reunion cater to tourists, domestic and international. They come for a taste of The Bristol Sessions and the current state of music and culture as delivered in downtown Bristol.

Recording studios chime in within a narrative that’s ongoing.

“There’s an energy in Bristol that is unlike any other,” said Matt Smile, owner of Audioasis, a recording studio on State Street in Bristol, Virginia. “I want to embody that energy with my studio. That’s why we’re on State Street. It was like a blessing from God.”

Such studios, including Mike Stephenson’s Classic Recording Studio, carry Bristol’s mantle of music creation into the future. Scores of local as well as regional and national musicians have recorded singles, EPs and full albums at Classic.

“I have recorded 15 albums at Classic,” said Moose Roberts, of Bristol, Tennessee.

Classic, Roberts said, offers an outstanding space and atmosphere for recording artists, novice to professional, to cement their music into permanency. He attributes much of the comfort to its owner.

“It’s Mikey,” Roberts said. “He’s easy to work with. I don’t feel inhibited, don’t feel like I’m being judged. He takes it as it comes. If you have an idea, he finds a way to make it happen. It’s not just a compliment; it’s the truth.”

“It’s all analog. Everything I have is period,” said Atkinson, who established BigTone in December 2017. “This studio is based on analog, which came out in 1948. My sound is based on 1940s and 50s analog tube and tape technology.”

BigTone’s clientele reverberates with musicians local to national. Their motto of “classic sound in a modern age” has attracted former Fabulous Thunderbird lead singer Kim Wilson as well as New Orleans’ Esther Rose. Local musicians from Johnson City’s Bill and the Belles to Clintwood’s 49 Winchester have recorded at BigTone.

“Vaden Landers did our first session,” said Atkinson, 32. “He ended up doing two albums with us.”

“I played a lot of music in the Bristol area during that time (his college days while attending East Tennessee State University in Johnson City) — and even made my first album there while still in college,” said Chesney in a release preceding his performance at Bristol Motor Speedway in 2016.

Located next door to Eatz on Moore Street, around the corner from State Street, Classic hosted Chesney in 1989.

“Kenny asked me to produce his record,” said Tim Stafford, of bluegrass’ Blue Highway, who produced and played guitar on Chesney’s album. “It was called ‘Good Old Boy At Heart.’”

At the time, Chesney played guitar in ETSU’s bluegrass band. Today, copies of the album – which he sold for $5 during his live shows, are exceedingly rare.

“He wanted something to sell at his local shows,” Stafford said.

Each of today’s studios approach music in different ways. For instance, upon recording a song at The Earnest Tube, Holley then cuts the song directly to a lacquer disc, from which vinyl record copies can be made.

“Lacquer discs are essentially blank records,” Holley, 49, said. “If you make a record for mass production, your song has to be cut into that disc before it goes into mass production. To bring this into the modern age, we transcribe them into a computer.”

Holley, who lives in Cleveland, Ohio, opened The Earnest Tube — a play on the name of country music pioneer Ernest Tubb, in 2017. A wide range of musicians have recorded at The Earnest Tube, which is around the corner from The Bristol Hotel. They include Bristol’s JP Parsons and Johnson City’s Amythyst Kiah.

A step inside his space reveals a wall of record albums to the right and a long wooden church pew to the left. In between, a recording console looks out upon a large Oriental rug and space from which musicians record.

They’re time machines, The Earnest Tube and BigTone. Look inside for visions into the past.

“It’s my dream space,” Holley said. “I want to give musicians the opportunity to experience recording in a way they may not be familiar with. I want to help connect their music with the music that was created here in 1927.”

Shepherded by producer Ralph Peer of the Victor Talking Machine Company, the Bristol Sessions provided a springboard from which Jimmie Rodgers and The Carter Family became nationwide stars. The sessions became the foundation for the development of the country music industry. Consequently, author Nolan Porterfield referred to The Bristol Sessions as “the big bang of country music.”

In the PBS documentary, “American Epic,” actor Robert Redford said of Peer and Bristol: “He … caught lightning in a bottle. It was the first time America heard itself.”

Johnny Cash went one step further. The Bristol Sessions were, Cash said, “the single most important event in the history of country music.”

Peer was modern in 1927. Smile’s Audioasis as well as Stephenson’s Classic proceed as studios steeped in modern ways of making music circa today. Audioasis’ clientele reflect its forward-thinking modus operandi.

“I’ve worked with Brent (Hinds) from (prog-metal band) Mastodon, who was playing with the band West End Motel,” said Smile, who opened Audioasis in 2019. “They were walking down State Street, and just walked in. They next thing I knew, we were recording a song.”

Paired visions of Matt and his wife, Kayla, grew into the modern and inviting Audioasis.

“It is an oasis,” said Pat Green, who recorded his entire first album in Smile’s studio. “I had never been in a studio, but Matt made me feel so comfortable.”

Holley’s Earnest Tube and Atkinson’s BigTone create in the present as they hearken to the past.

All stride within the enveloping trade winds of Bristol’s historic 1927 recording sessions. As a result, people come to Bristol from such far-flung locales as Russia and Japan to observe history. And people make records in downtown Bristol, mere steps from and nearly 100 years after history was made.

Music history was and continues to be made in downtown Bristol.

“This is the wellspring, man,” Holley said.

The Washington County Sheriff's Office has recovered the remains of Athina Hopson in the Mendota area. She was reported missing in 2019. James Michael Wright, who remains in Southwest Regional Jail in Abingdon, is charged in her death.

Eastman Chemical Co. — one of Tennessee’s largest employers — plans to spend about $250 million to build one of the world’s largest plastic-to-plastic molecular recycling facilities in Kingsport.

Residents of Virginia’s Mount Rogers, LENOWISCO and Cumberland Plateau health districts can now fill out an online survey to join a waiting list for COVID-19 vaccine appointments, the districts said in news releases.

The Sullivan County Regional Health Department will give first doses of the COVID-19 vaccine at the Bristol Dragway today, in addition to second doses of the Pfizer vaccine.

No name-calling, personal insults or threats. No attacks based on race, gender, ethnicity, etc. No writing with your caps lock on – it's screaming. Keep on topic and under 1,500 characters. No profanity or vulgarity. Stay G- or PG-rated.
1 of 11

Clint Holley, who opened The Earnest Tube in 2017, mixes a recording.

With vintage equipment, Clint Holley cuts a song directly to a lacquer disc, from which vinyl records can be made for mass production. 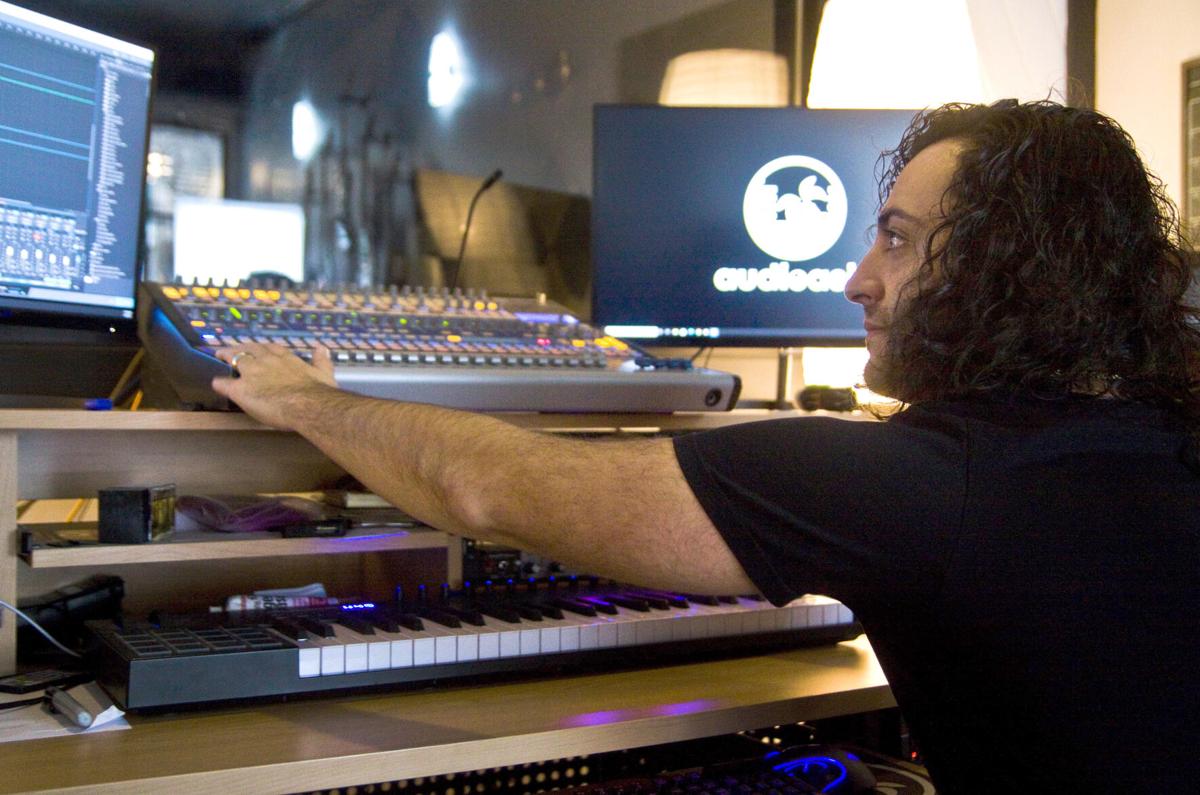 Matt Smile, owner of Audioasis on State Street in Bristol, Virginia, adjusts a mix on "Thunder and Lightning," a newly recorded song from his band, The Buddz. 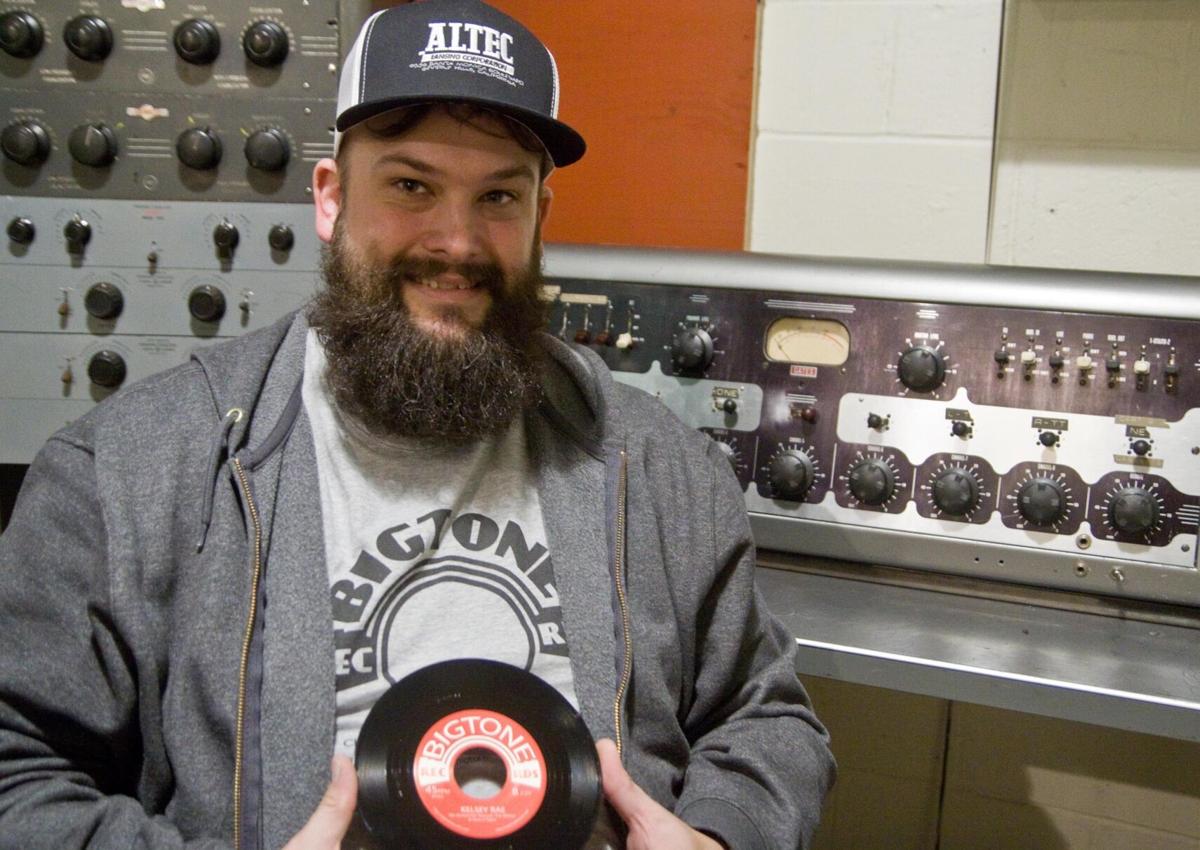 Matt Smile, a lifelong fan of rock band KISS, plays an Ibanez Iceman guitar made famous by KISS' Paul Stanley, in the lobby of his recording studio, Audioasis.

A Martin to the left, a Fender Precision bass to the right, guitars adorn a wall inside the lobby of Matt Smile's Audioasis recording studio.

A record from country singer Kelsey Rae, made at Bristol's BigTone Records, awaits a needle to twang within its grooves.

Music history permeates The Earnest Tube -- even on the walls of its bathroom.

At the microphone and ready to record, Matt Smile offers a metal salute moments before the recording of a vocal.

Clint Holley, who lives in Cleveland, Ohio, owns and operates The Earnest Tube, a recording studio in downtown Bristol.