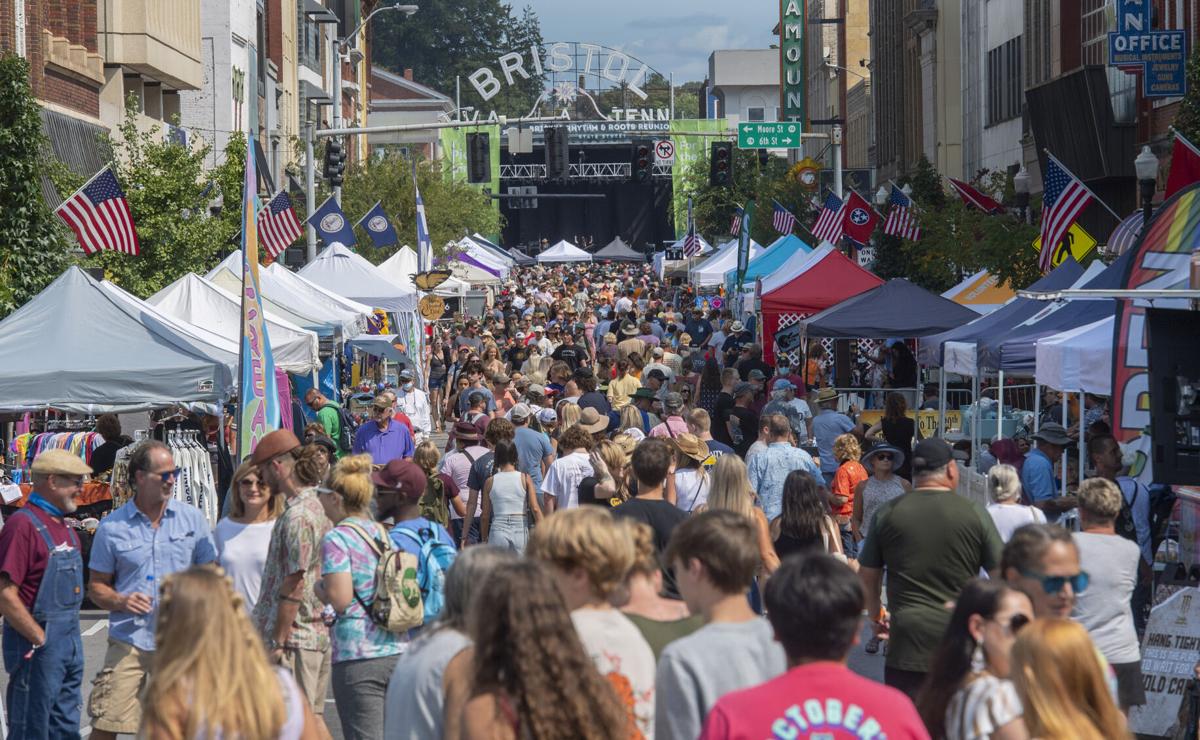 Music fans make their way down State Street on Saturday afternoon during the 2021 Rhythm and Roots Reunion weekend. 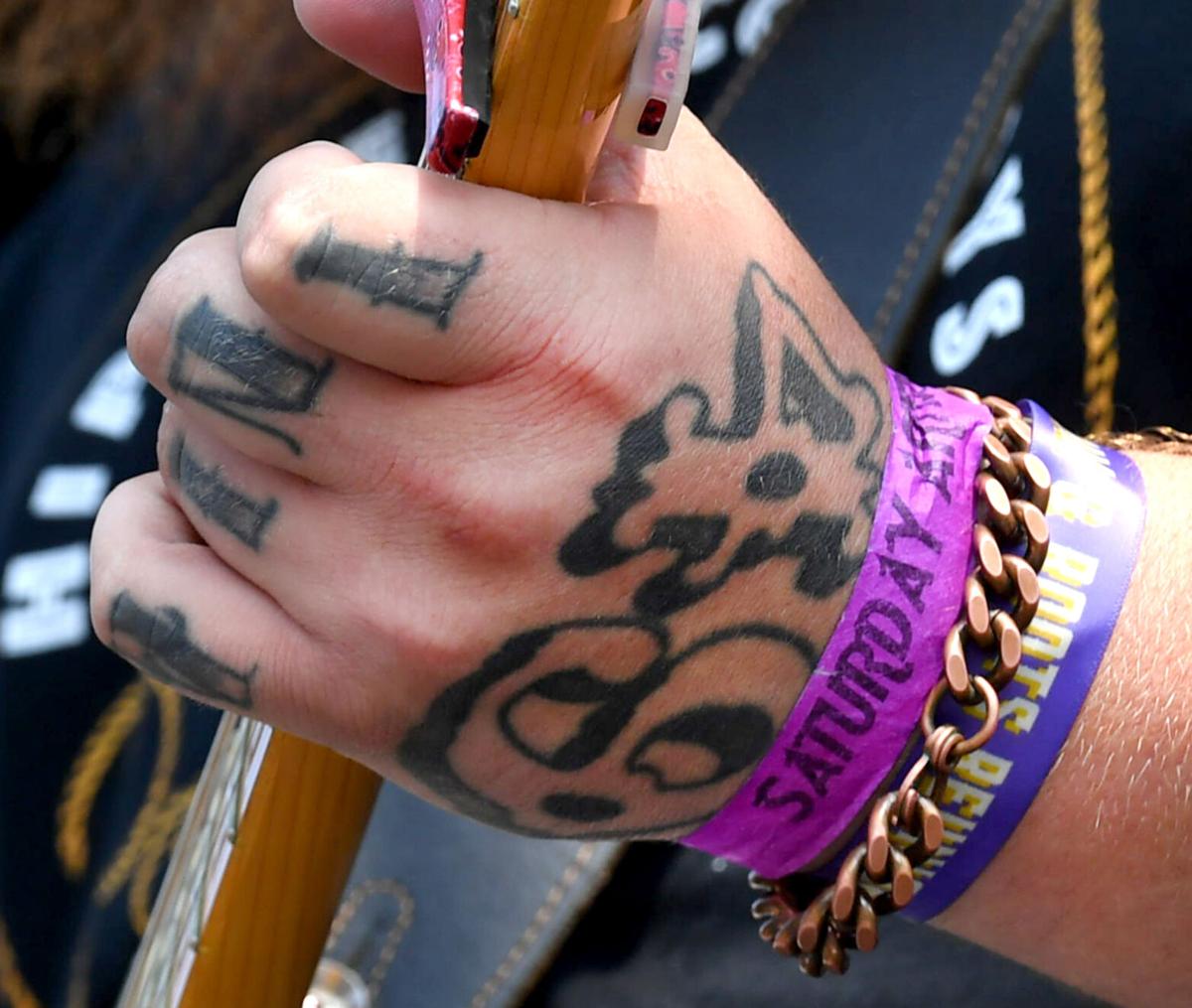 49 Winchester lead singer Isaac Gibson has a "49" tattoo on his left hand. 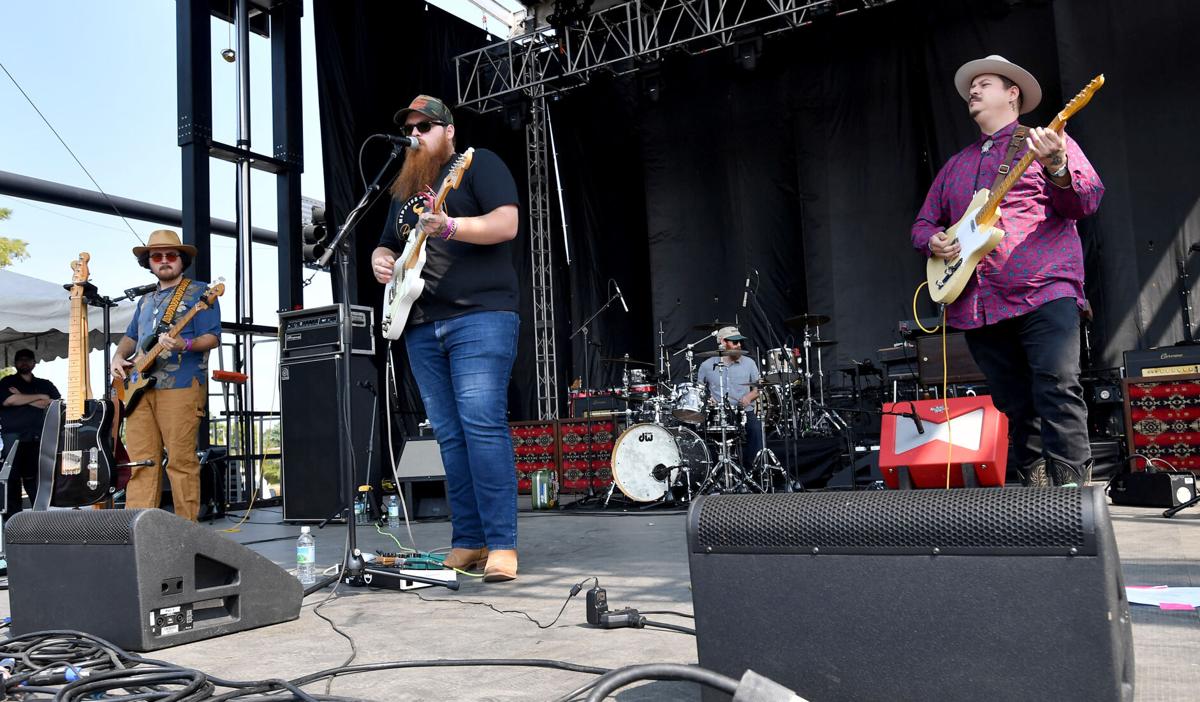 49 Winchester perform on the State Street stage to a large crowd Saturday afternoon at the annual Rhythm & Roots Reunion weekend. 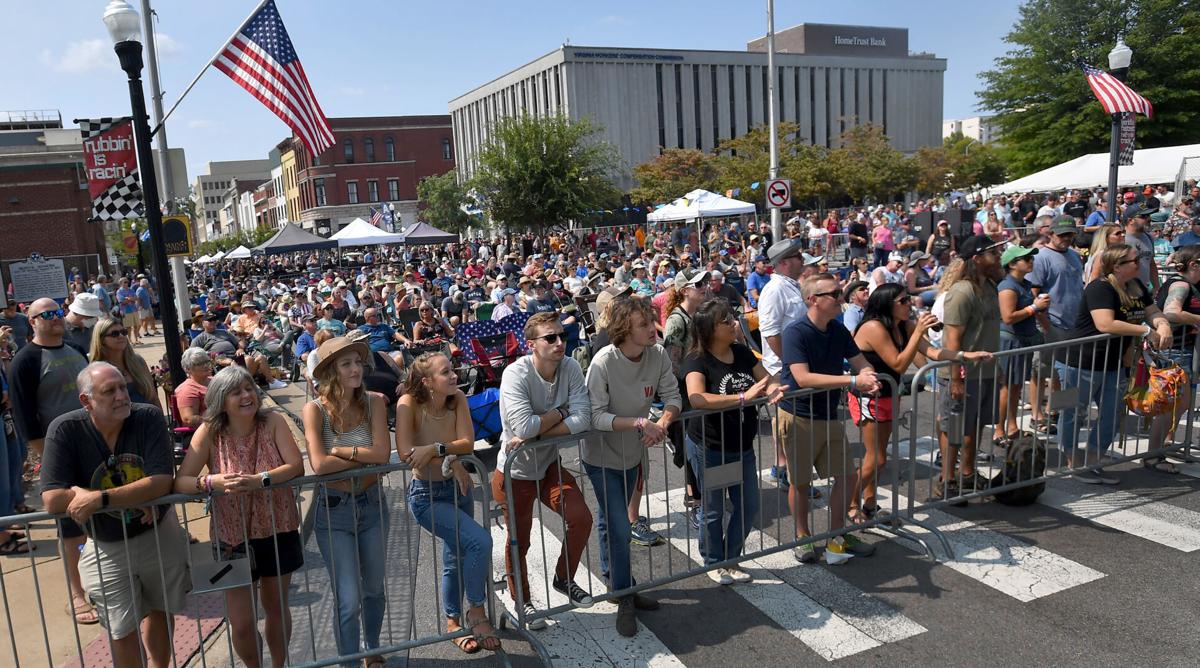 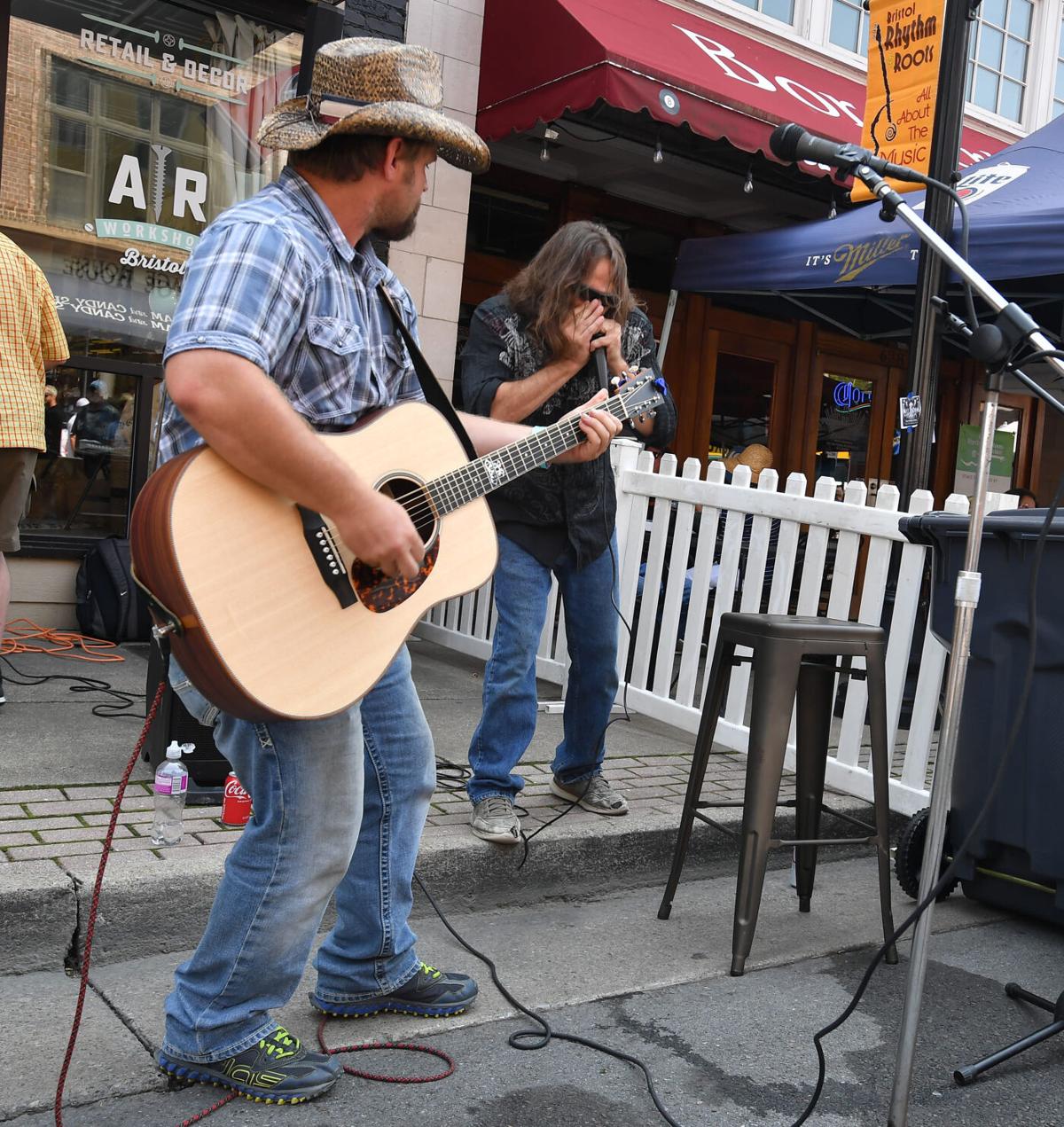 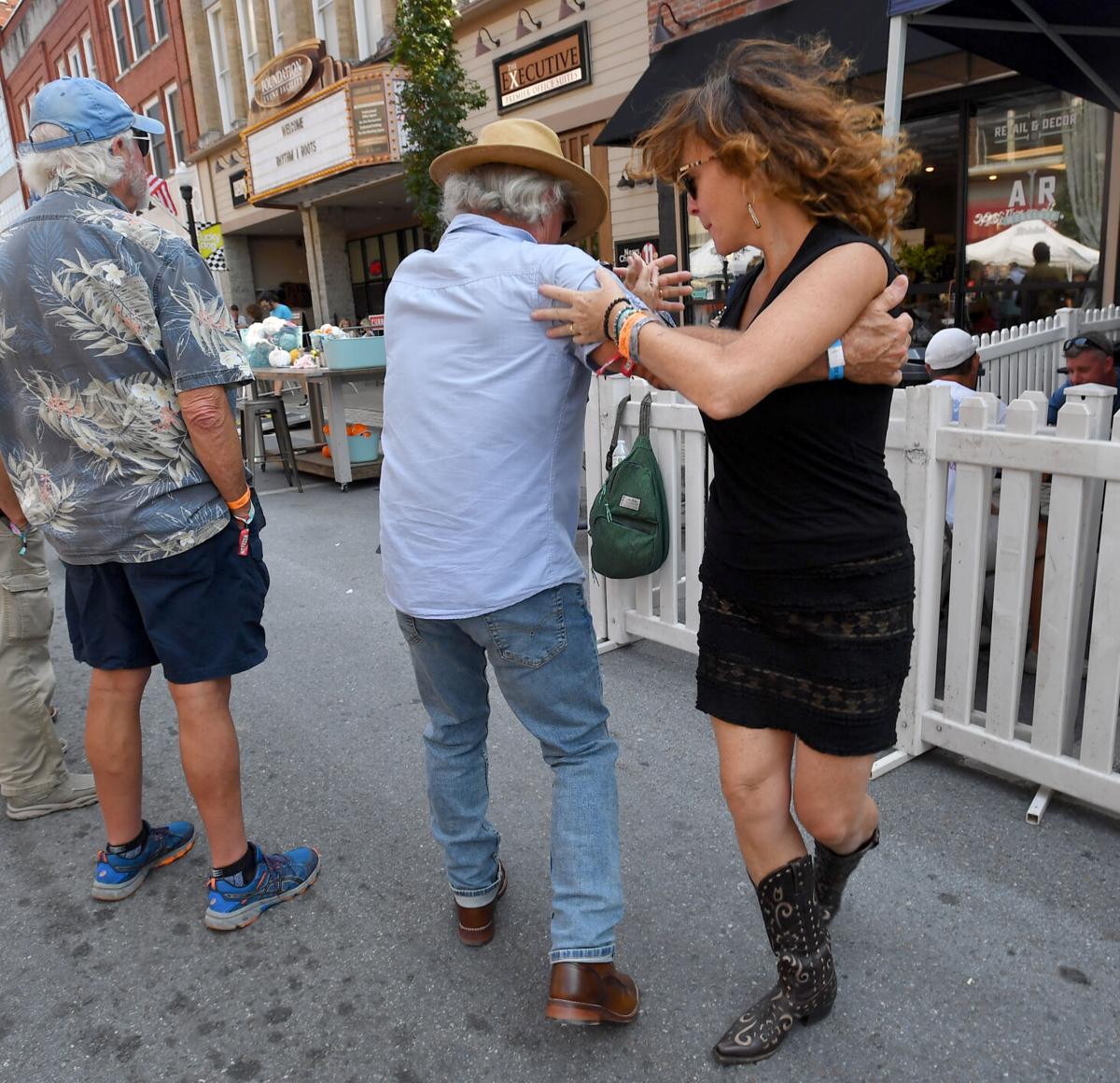 A couple dance to the music along State Street on Saturday afternoon during the Rhythm & Roots Reunion weekend. 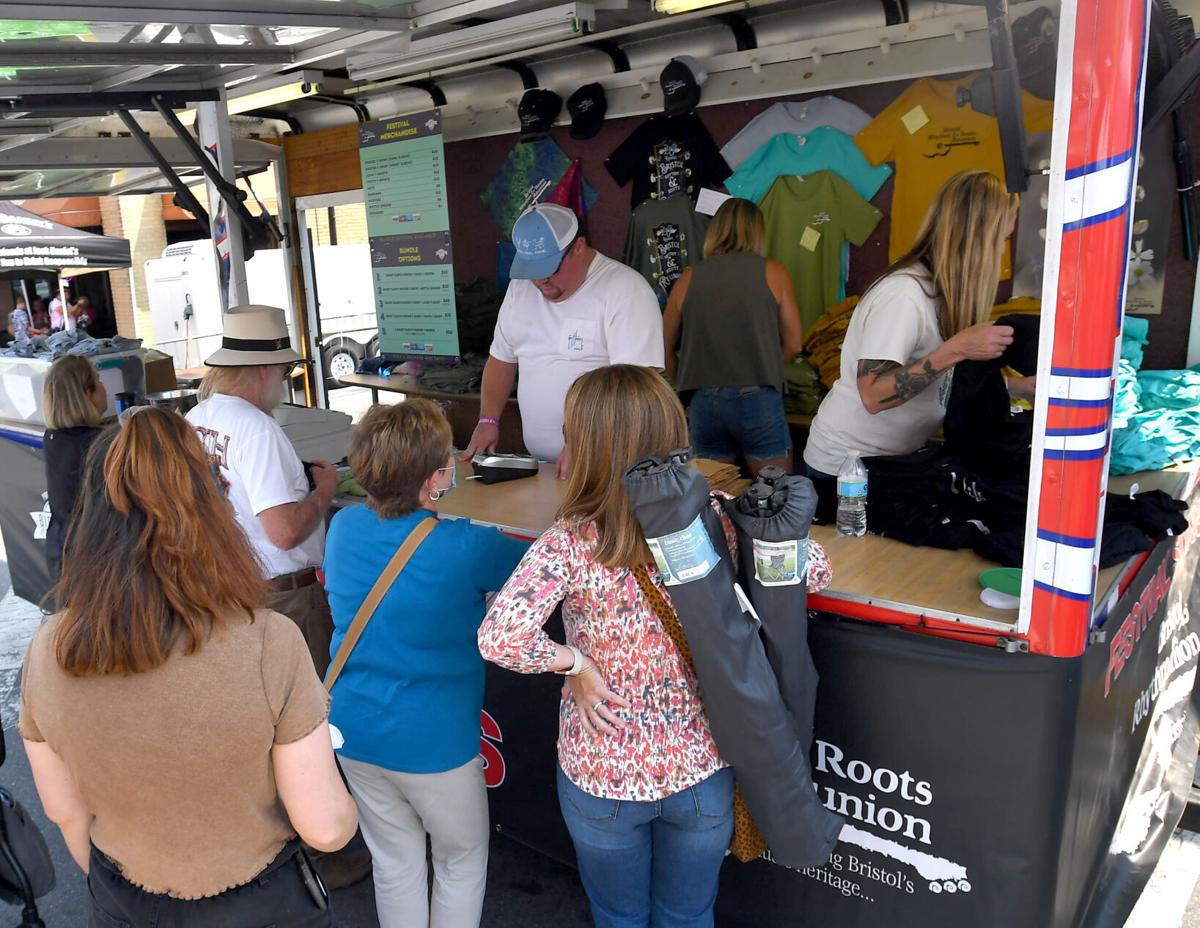 Fans line up to make purchases at the Rhythm & Roots souvenir trailer on Saturday afternoon.

Music again echoed off concrete and brick walls of the Twin City’s downtown and the masses resumed “walking the line” Saturday during the second day of the Bristol Rhythm & Roots Reunion.

It was day two of the 20th anniversary music festival — filling downtown after a one-year absence due to the global pandemic.

Downtown merchant Karen Hester greeted passersby Saturday with a smile, a welcome and a couple tubs of iced down bottled water and soda.

“We’re getting there,” Hester said. “To be honest it was a little slow on Friday, but it’s already much busier today so that’s exciting. You can feel the excitement in the air.”

“We’re not going to let something like COVID get us down. We’re here to listen to great music, see all the familiar faces and welcome folks from states all over. We have a lot to be thankful for,” Hester said. “Maybe sales weren’t quite what they were last night [Friday] compared to two years ago, but we’re thankful for what we’ve got, and we’re counting on a great day today and tomorrow. The Lord blessed us with gorgeous weather and low humidity, so we’re really thankful.”

A block away, local artist and author Leigh Ann Agee greeted several people who meandered through her selection of “Moon Bound Girl” prints and other items — many with a Bristol theme.

“It’s been good. The enthusiasm is showing in everybody. It is really great,” Agee said. “People are glad to be out — all of us are.”

Agee said she’s been able to do a few shows but was happy to be back on State Street for the festival.

That has been the prevailing sentiment according to Leah Ross, executive director of the Birthplace of Country Music.

“I would say our crowds are down but, this year, I think it’s a good thing. There have been some areas have been pretty crowded when certain artists played,” Ross said. “We’re pleased with the crowd. I’ve been encouraged by people saying they felt good being down here. I think the crowds are down a little, but that’s OK this year.”

Ross said she was very pleased with Friday night’s crowd for John Anderson and received good feedback from his two-person acoustic set. The following set by The SteelDrivers attracted that many or more folks for the opening night finale.

Attendees of this year’s music festival may have witnessed a passing of the baton from this region’s longtime crowd favorites Folk Soul Revival — who performed their final show Saturday night on the festival’s Piedmont stage — to 49 Winchester, a Castlewood-based band that attracted one of the largest crowds in its history Saturday on the State Street stage.

“Folk Soul Revival, we’ve been fans of theirs since we were teenagers,” 49 Winchester bassist Chase Chafin said Saturday, welcoming the comparison after his band’s second performance of the weekend.

It’s no coincidence that when Folk Soul followed them onto the Piedmont stage Friday, they told the crowd, “49 Winchester is my favorite band, and they should be yours too.”

Chafin, one of three founding members of 49 Winchester along with lead singer and guitarist Isaac Gibson and Bus Shelton on guitar, said their earliest influences preceded them on the Rhythm & Roots stages.

“It’s kind of funny but a lot of our biggest influences were bands we saw here,” Chafin said. “Bristol Rhythm & Roots artists are some of the biggest influences because we have been coming to this festival since we’ve have been playing, maybe 15 years. We were growing up seeing really cool bands once a year in September here.”

This marked the band’s third time playing at the festival.

A check of the festival smart phone app revealed 49 Winchester’s Saturday performance had the third most fan check-ins of the day, ranking behind Saturday headliner Blackberry Smoke and the final performance of Folk Soul Revival.

“It’s amazing. That’s basically all we ever wanted to do as teenagers. ‘Oh, it would be so awesome to play at Bristol Rhythm & Roots one day.’ Now it’s the second time playing the big State Street stage. We played that two years ago; the crowd was definitely bigger today,” Chafin said.

He admits to a case of butterflies.

“This weekend, in particular, is our homecoming. Honestly the last month leading up to this we kind of get butterflies — especially when you’re about to walk out in front of that many people. It’s different if you’re out in Texas, far away from home, versus here with a lot of familiar faces,” Chafin said.

And what is that makes people pay money to come listen, sing along or get up and dance once the band starts playing?

“It’s the songs and the honesty of it. I think the songs mean a lot to certain people.

Tunes like “Hays Kansas,” “It’s a Shame” and “Long, Hard Life,” which all appear on their “III” record, are fan favorites.

The band has recorded three independent albums — with parts of the last two recorded at Classic Recording Studios in Bristol — and tour the southeast, east and Midwest. But their horizons may be about to widen.

The band is preparing to begin a new album for New West Records, a label based in Nashville and Athens, Georgia, that reached out to them. New West already includes Steve Earle, Pokey LaFarge and Justin Townes Earle.

“This is a big step up for us,” Chafin said. “We never pitched a record label. We’ve been fiercely independent from the start, but this is the most perfect scenario.

“It’s really about the songs — real country or Americana. It’s not radio country. And we’re in really good company. It was extremely exciting for us.”

Not bad for a group of friends who began playing together as teenagers and took their band name from Winchester Street in Castlewood where Chafin and Gibson grew up as neighbors and best friends.

“When we first started the band, I was originally the banjo player, but we started adding rock elements, got electrified and plugged in. As teenagers we loved rock music and country music. It’s a combination of a lot of styles, but we keep leaning into more of a rock sound, especially live,” Chafin said.

The band today serves up more of a rock sound, especially live. Festival fans will get one more opportunity to catch 49 Winchester, today at 2 p.m., at Cumberland Square Park. Chafin said fans can expect to hear some favorites but expect a different set list compared to what they played Saturday.

The final day of the 20th anniversary Bristol Rhythm & Roots Reunion kicks off with a series of shows at noon and continuing until about 7 p.m.

Among the day’s opening acts are The Wooks at Cumberland Square Park, Roanoke at Machiavelli’s outdoor tent and Virginia West at Stateline Bar and Grill.

Music fans make their way down State Street on Saturday afternoon during the 2021 Rhythm and Roots Reunion weekend. 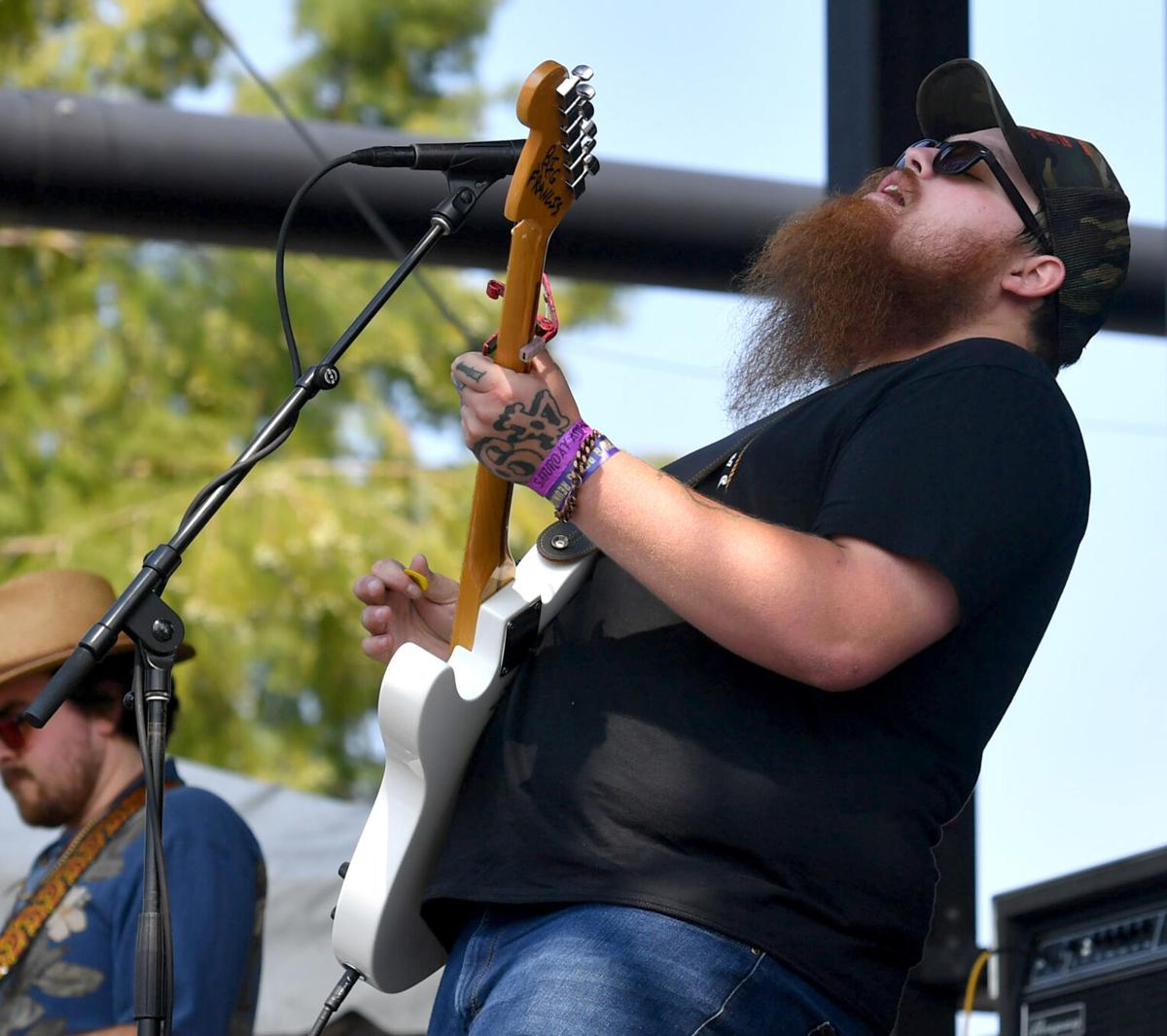 49 Winchester lead singer Isaac Gibson has a "49" tattoo on his left hand.

49 Winchester perform on the State Street stage to a large crowd Saturday afternoon at the annual Rhythm & Roots Reunion weekend.

A couple dance to the music along State Street on Saturday afternoon during the Rhythm & Roots Reunion weekend.

Fans line up to make purchases at the Rhythm & Roots souvenir trailer on Saturday afternoon.