BRISTOL, Va. — The city of Bristol, Virginia on Friday rejected a BVU Authority claim that it — not the city — owns City Hall while repeating its call for a judge to find that BVU owes the city millions in a court document filed Friday in Bristol’s lawsuit against its utilities provider. 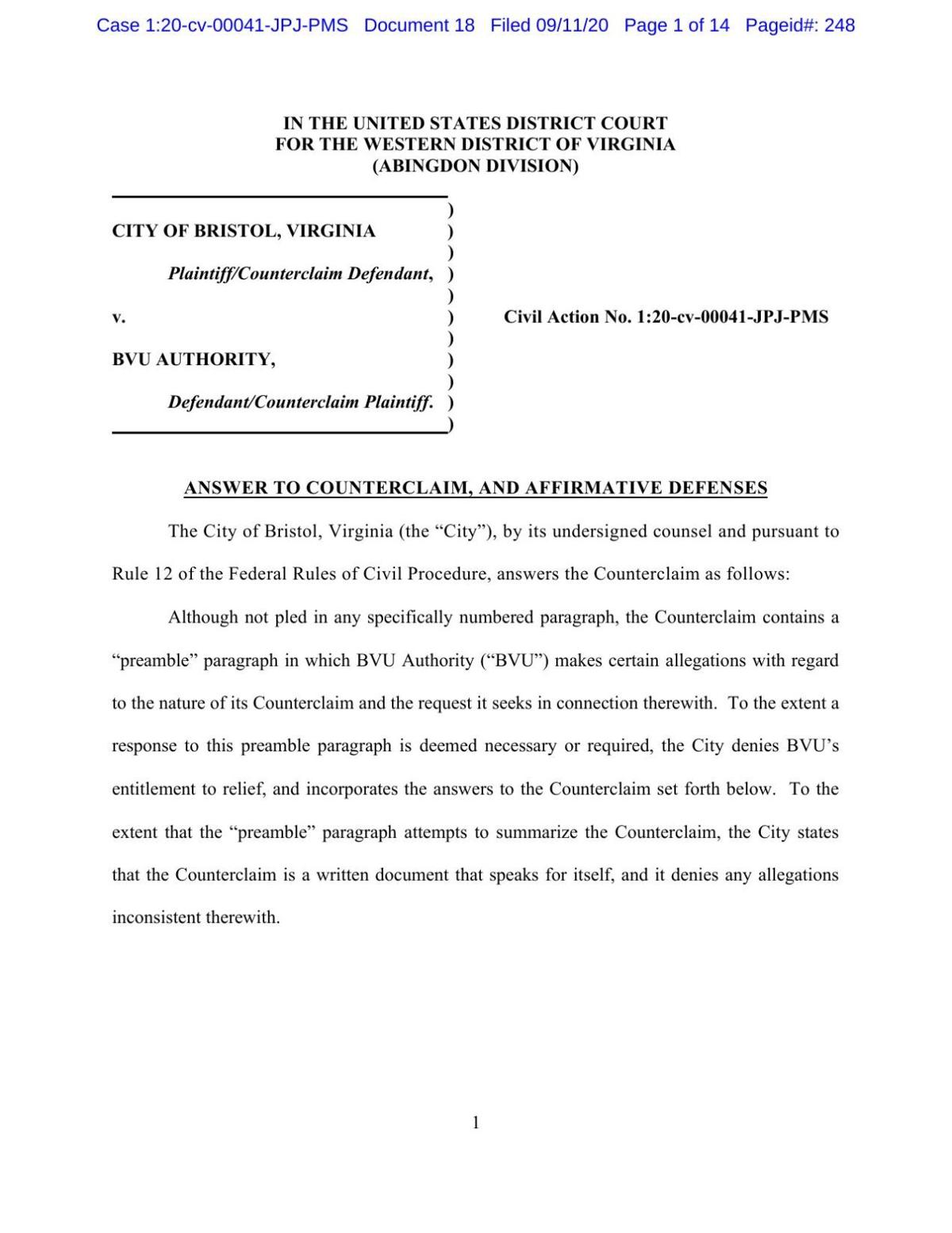 The city is seeking $6.5 million in its complaint, claiming BVU incorrectly used $13 million from the 2018 sale of its former OptiNet telecommunications division to resolve internal debt and half that amount is owed to the city under the terms of a 2009 transition agreement.

The case is scheduled for trial in November 2021 in U.S. District Court in Abingdon.

In the city’s 14-page Friday filing, the city asks the court to dismiss all aspects of a BVU counterclaim filed Aug. 21 and find in its favor.

In the counterclaim, BVU said electric system funds were used to acquire the land and build the City Hall complex, which was BVU’s former headquarters. It claims to still own the property and asks a judge to order the city to pay millions in rent. It also seeks to have the transition agreement declared void and that it owes the city no money.

“The city admits that beginning in or around 1954, the city purchased 16 parcels of land in downtown Bristol to create the Lee Street downtown campus,” according to Friday’s filing. “The city lacks knowledge or information sufficient to form a belief as to the remaining parts of this allegation, including alleged later purchases of the properties by BVUB [Bristol Virginia Utilities Board] and the source of funds used to purchase the properties and thus denies such parts of the allegation.”

BVU was a division of city government until July 1, 2010, when the present independent authority was established by an act of the General Assembly.

In its response, the city further denies it was “the party that formed the plan” to create the separate BVU Authority.

BVU otherwise asked the court to determine that funds from the OptiNet sale were used properly to pay off internal debt owed to the electric system plus other debt so no proceeds exist to share with the city.

The debt in question totaled $23 million, but was removed from BVU’s books July 3, 2006, following a change in state law regarding utility cross-subsidization.

A 2016 state audit determined that $13 million was removed improperly and, in 2017, the authority board voted to reinstate the $13 million debt on its books plus $700,000 in interest. Funds from the sale of OptiNet were subsequently used to pay off that restated debt.

Adwolfe volunteer firefighter dies in the line of duty

Volunteer firefighter and emergency medical Technician, Charles C. Woods, was found unresponsive early this morning and attempts to revive him were unsuccessful.

Washington County Public Schools will reopen most of its classrooms two days a week for in-person learning starting Oct. 26, the School Board decided Monday. More than two dozen students, parents and teachers addressed the board at its meeting Monday, urging action to bring students back to school.

Nearly 400 city residents have already cast their ballots for the Nov. 3 election in the first two days of Virginia’s new early voting.

Firefighters and emergency medical service workers across Smyth County were mourning the loss of a fallen comrade Wednesday.

Bristol, Tenn. Board of Education calls for moratorium on standardized testing in Tennessee

BRISTOL, Tenn. - At its regularly scheduled Monday evening meeting, the Bristol Tennessee Board of Education voted in favor of a resolution ca…

RECENT HOME SALES: Take a look at homes sold around the region